The French word "paillard" has a literal meaning unrelated to the dish. The dish itself was coined after a 19th century restaurateur.

Click the link HERE to learn how to portion a whole pork loin for sous vide processing.

Vacuum seal the pork in a heat rated bag. Process in the preheated bath for
Four hours.

Shock the package in iced water until it achieves 70 F/21 C–about 15 minutes. Refrigerate to 40 F/4 C before proceeding.

Peel the pear and use a mandolin or sharp knife to cut into thin, julienne strips. Toss lightly with the raisins, walnuts, salt, sugar, and vinegar Add the softened butter to hold everything together. Set aside.

Dip the sous vide package in hot tap water for a few seconds to melt the gel. Cut the corner of the bag and drain out the juices. There should only be a small amount, so either discard them or save for PROCESSING.

Finish removing the small roast from the bag and pat dry with a paper towel. Because of the low processing temperature, the pork will appear somewhat pink/gray and will still feel soft to the touch. The pork itself is pasteurized, but the texture on the palate would not be enjoyable to most people. The purpose of this low temperature driven consistency is to allow us to pound out the slices without causing the protein chains to completely collapse. 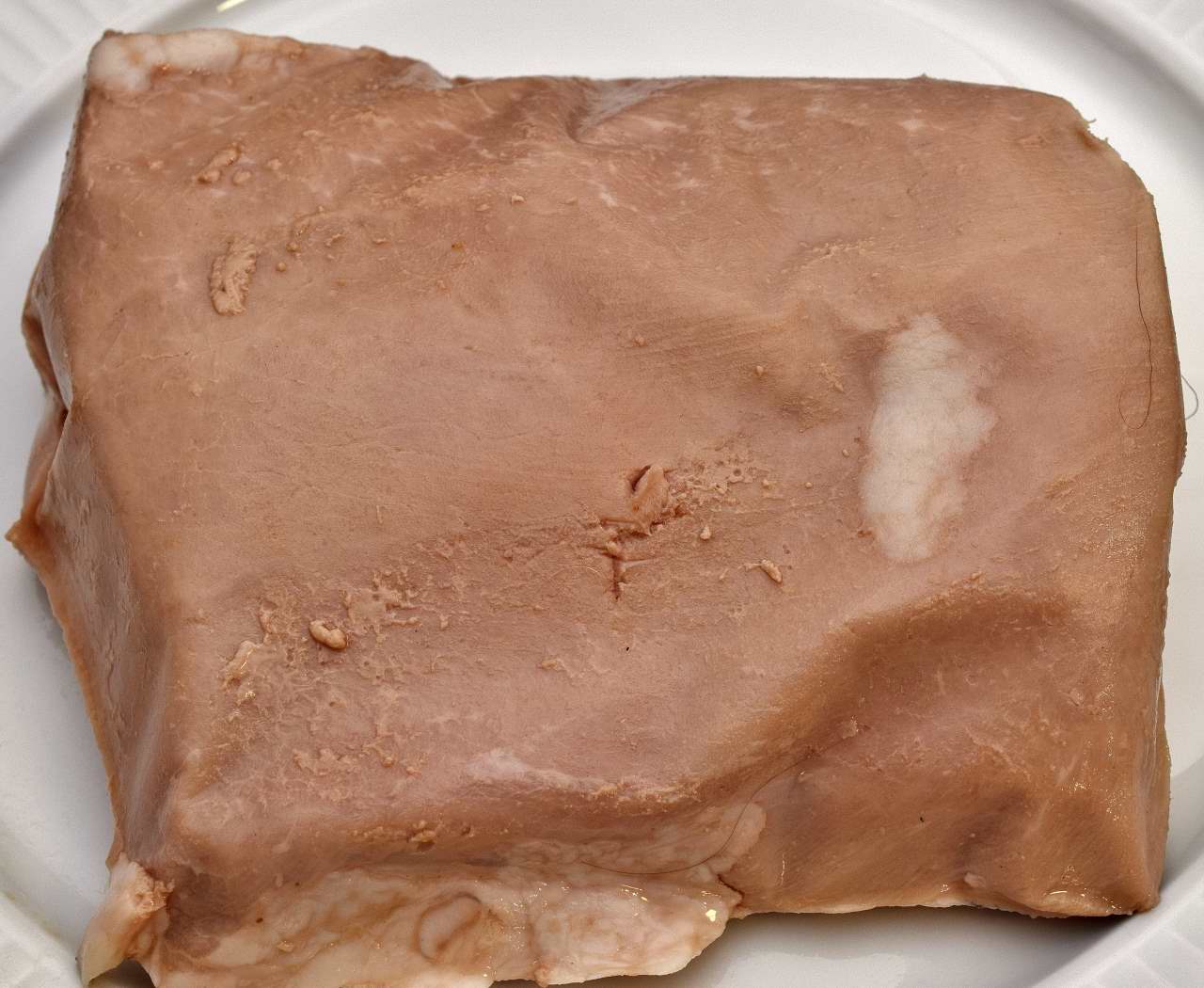 This kind of dish makes chefs’ eyes light up because of the bottom line benefit. As artistic as any chef may be, he/she knows that a profit must be turned or there will be no money to pay the chef. As a result, there will be no chef’s position, and there will most likely be no restaurant. To that extent, being a chef is just like selling cars, real estate or widgets.

Cut the meat into uniform slices, 1.5-2.5 oz/45-75 g each. Lay out a large piece of plastic wrap on a solid, steady work space or cutting board. A stable surface makes the pounding much more effective and is less likely to disturb the neighbors or scare the livestock. Lay another sheet of plastic over the meat. This prevents the impact from distributing tiny particles of meat and droplets of moisture on the walls of your kitchen. 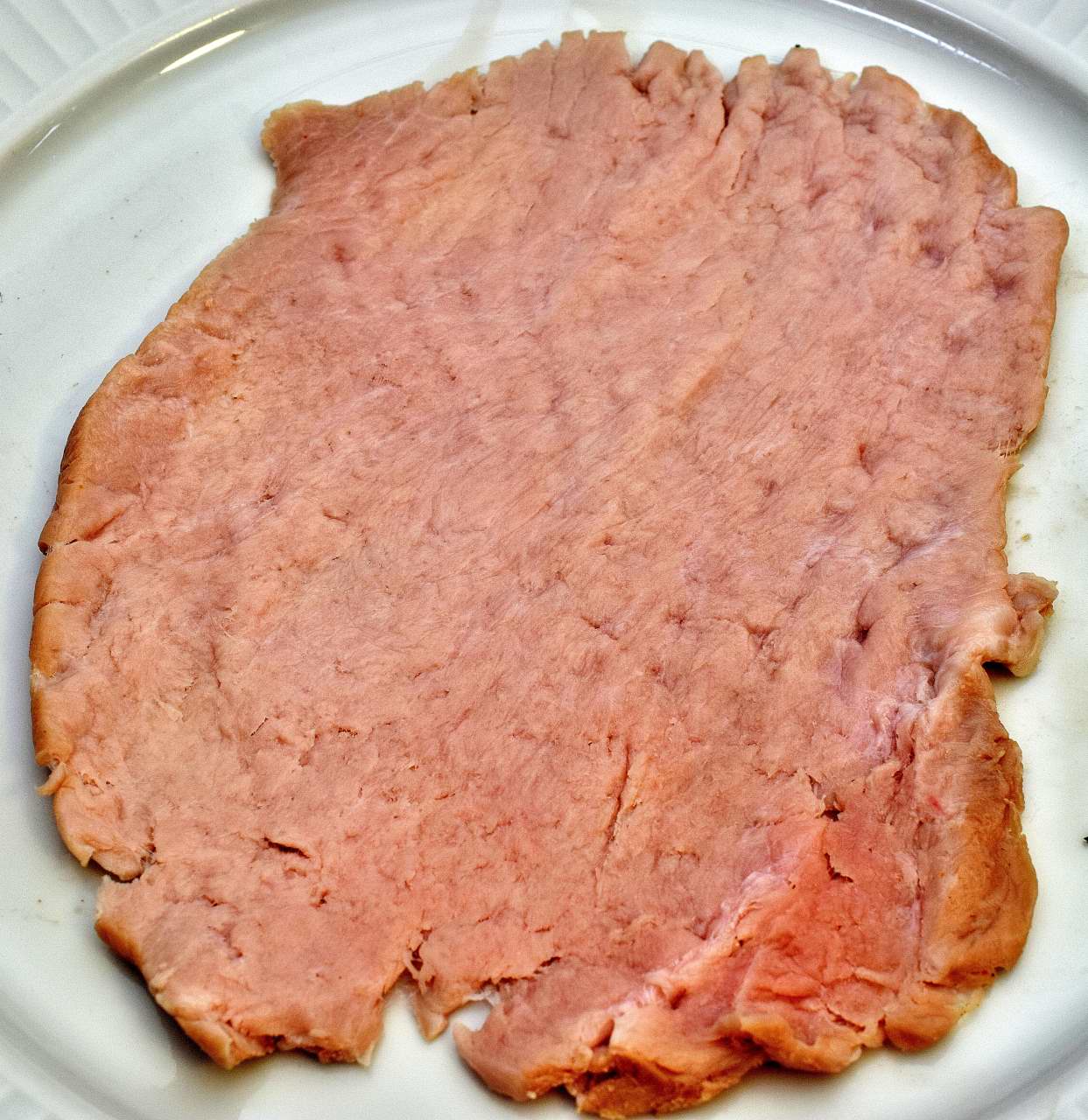 Use the meat mallet or a one piece rolling pin to tap the slices of pork until they look like the picture above. When recipes instruct people to pound out a cutlet, they always ask the same question: “how thin?”

I have been asked this question literally thousands of times and the answer is always the same: “as thin as possible without compromising the structural integrity of the meat.” There is no such thing as “too thin” unless it falls apart when you try to pick it up. Even then, in many cases, it can be repaired. 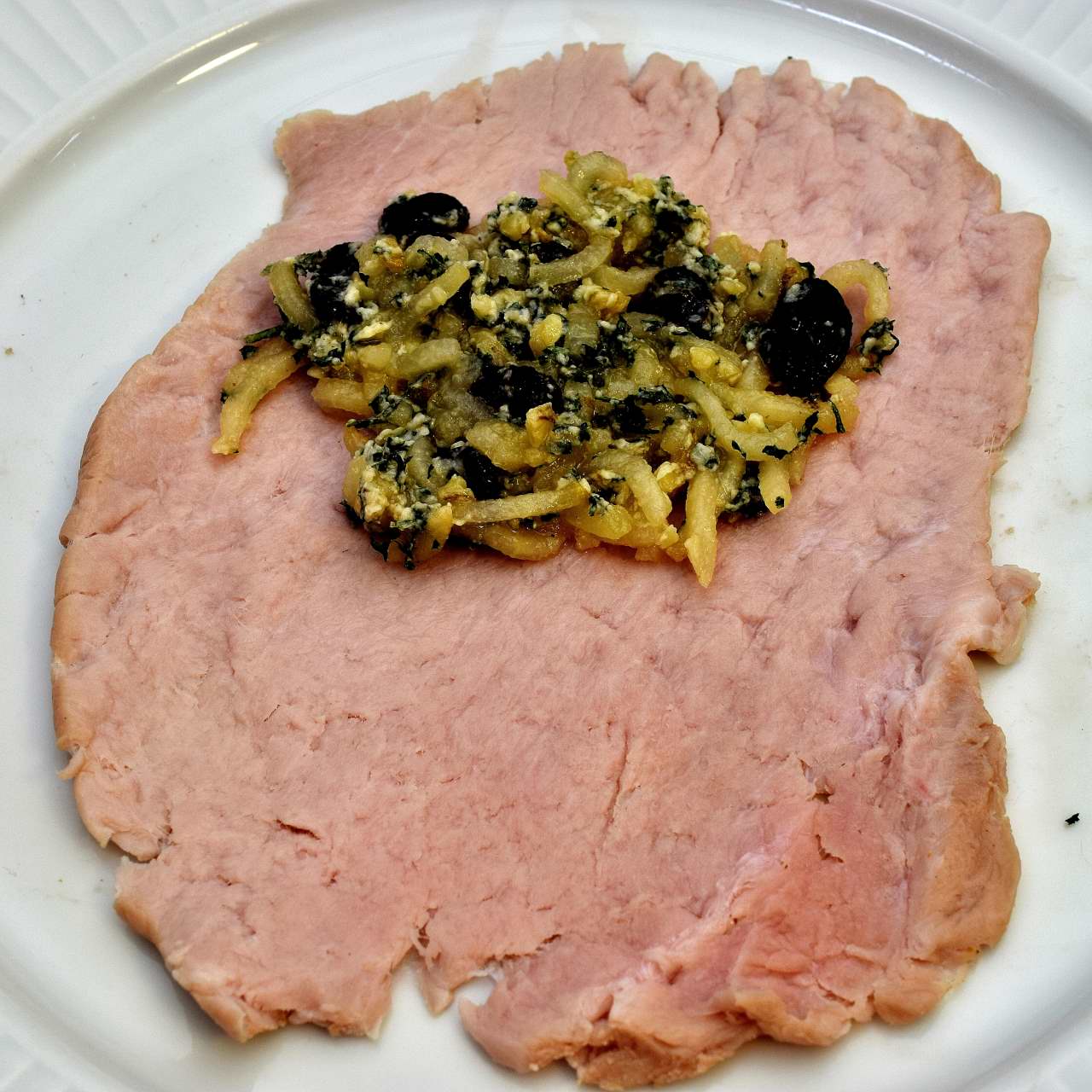 Put a large tablespoonful of the filling on the top half–how much depends on the actual size of the paillard. Many people cannot resist the urge to “over stuff.” The goal is to insert enough stuffing to detect–but not enough to strain the ability of the cutlet to contain it. The stuffing is there to provide flavor–not volume. 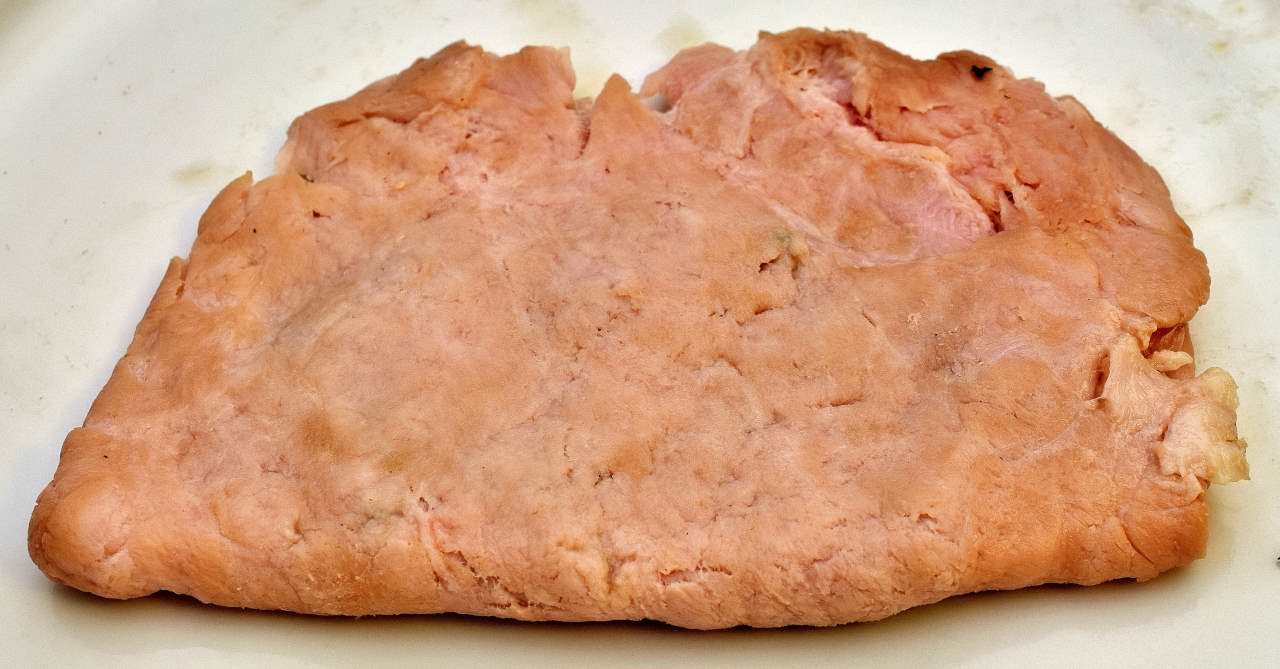 Fold the lower half over the upper half. Leave enough room around the stuffing so that the paillard can “seal” around the edges. There is enough albumen left in the meat to help it stick to itself. The end result should be uniform in thickness–the diner should be somewhat surprised to discover that the paillard is stuffed. Sprinkle with salt and pepper and set aside.

Use a sharp knife to cut off the top and bottom of an orange. Stand it on end and trace around the orange, exposing the segments and the membranes between them. Use the knife to remove the segments from the membrane. Put the segments in a small bowl and squeeze what remains of the orange over them. Repeat the process with the other orange. Cut three of the heirloom tomatoes in half and the other three into quarters to create varied shapes for the decoration. Add the tomatoes to the bowl with the orange wedges.

Combine the lemon juice, Dijon mustard, garlic powder and salt. Slowly drizzle the oil while stirring the other ingredients and the dressing will emulsify. This can also be done with a blender or stick blender.

Remove the core from the lettuce and toss individual leaves lightly with the dressing. Stack the leaves in the middle of the plate(s).

Heat the grill pan or skillet to 350 F/176 C. Dip a paper towel in oil and rub the grates or surface. Without crowding the pan, grill each paillard until brown–about 1 minute on the first side and about 30 seconds on the flip side. The pork is already pasteurized and therefore safe to eat “comme ça.” We are merely adding heat for aesthetic purposes. Cut the paillards in half. 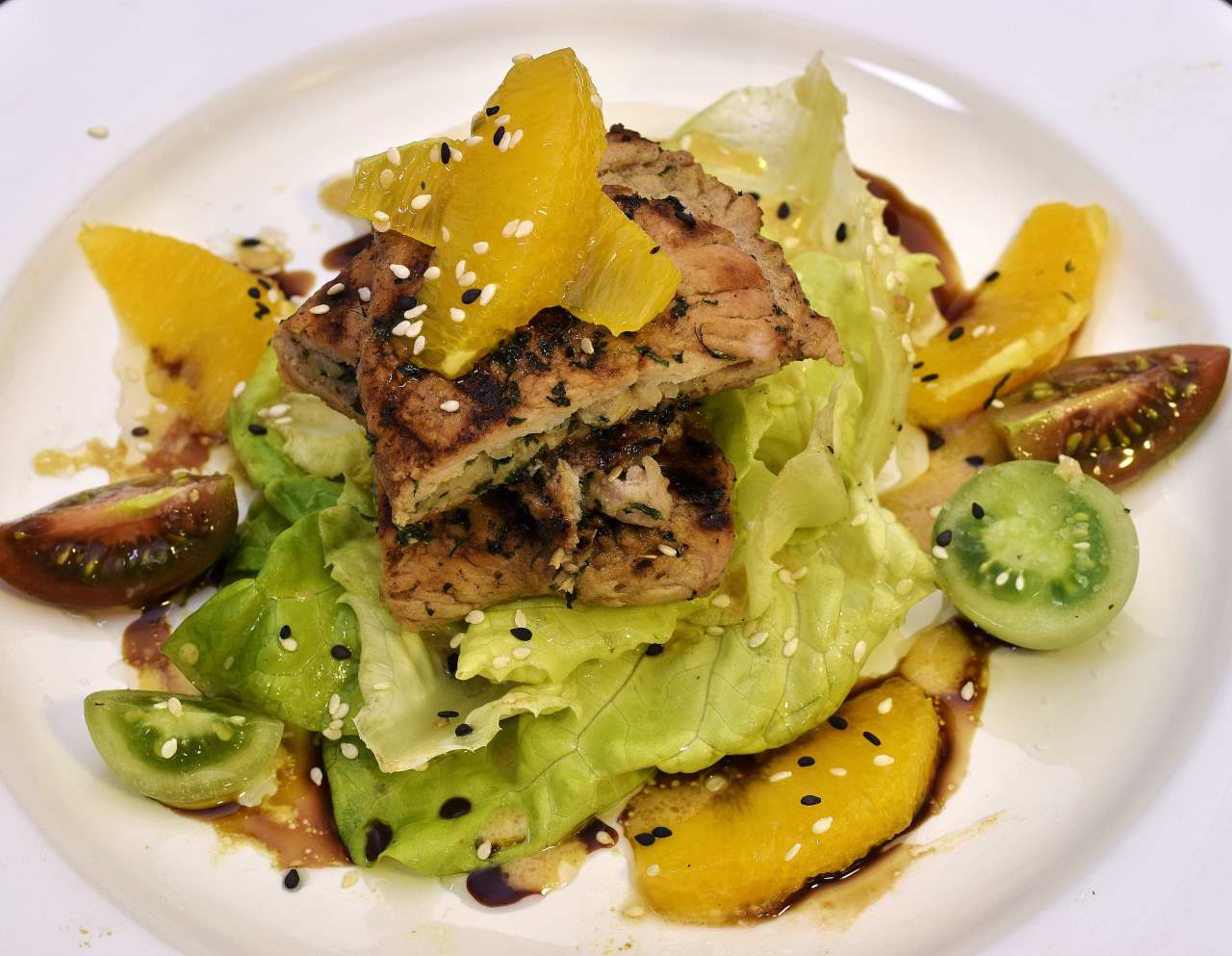 Carefully stack three paillard halves on top of the lettuce. Arrange the orange slices and the tomatoes on top and around. Drizzle with the balsamic syrup or kecap manis. 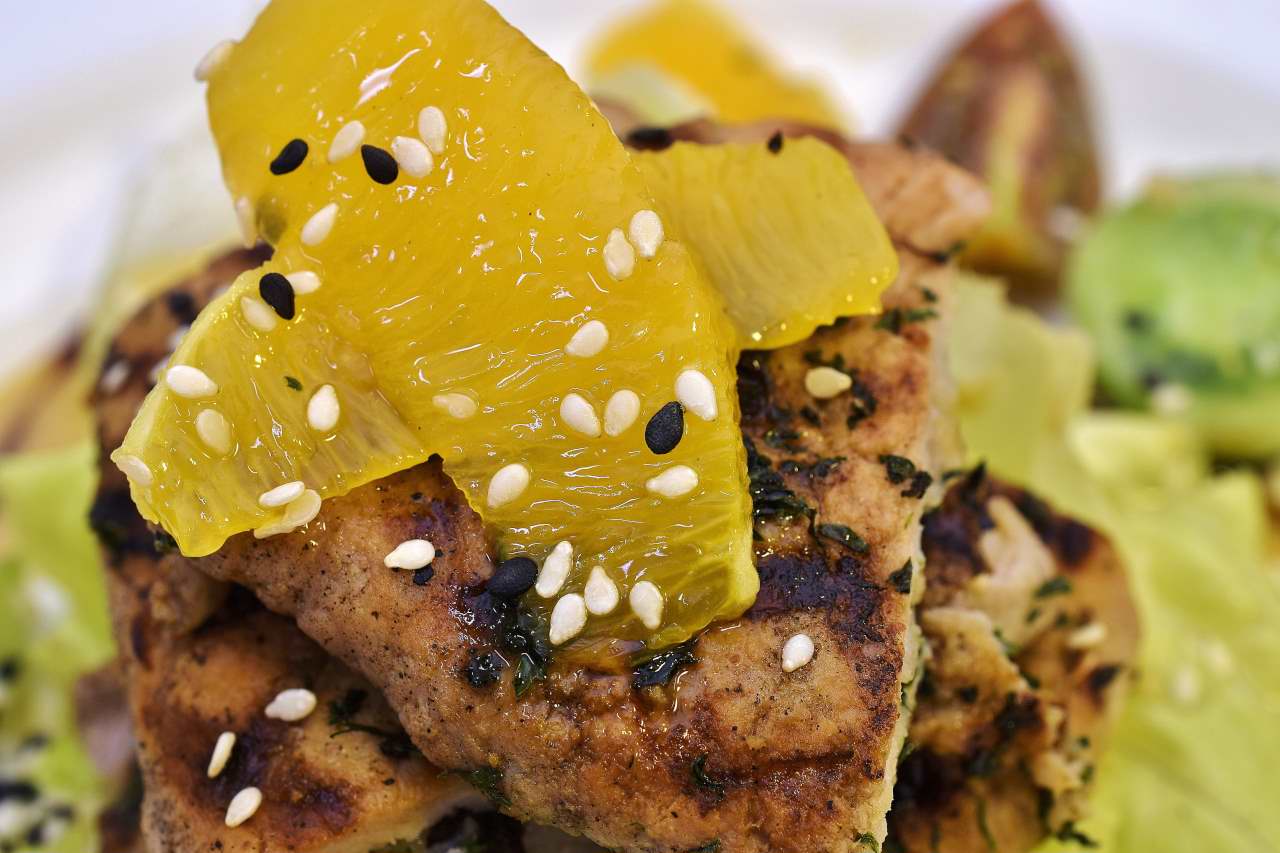 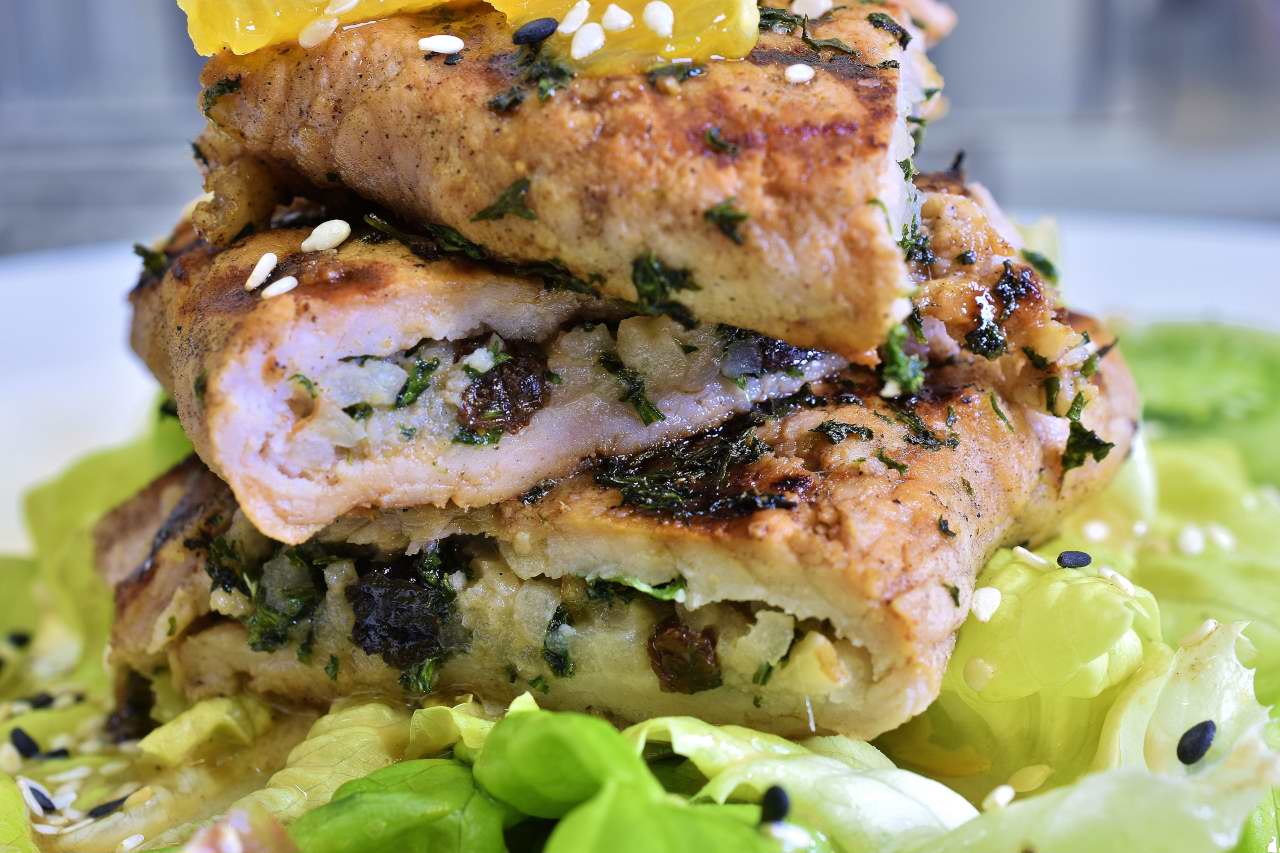 And there you have it!

Paillards originated as a preparation and presentation of veal or chicken. Like so many other dishes, the styling is now applied to other meats and even seafood like scallops or monkfish. The protein is flattened/compressed to achieve a distinct appearance and to cook quickly. It is commonly served for lunch or as a light entrée, and is often plated with a salad.

This recipe detours from the traditional model, such as it is, by stuffing and folding the paillard. The inclusion of pears, raisins, and walnuts in the filling bestows a vibrant texture without overwhelming the consistency of the pork. Oranges and heirloom tomatoes accent the overall impression.