Entrées that feature stuffings evoke festive images of both comfort and style. The idea of an "all-in-one" main course has universal appeal.

To see how to portion a whole pork loin for sous vide processing, click HERE. 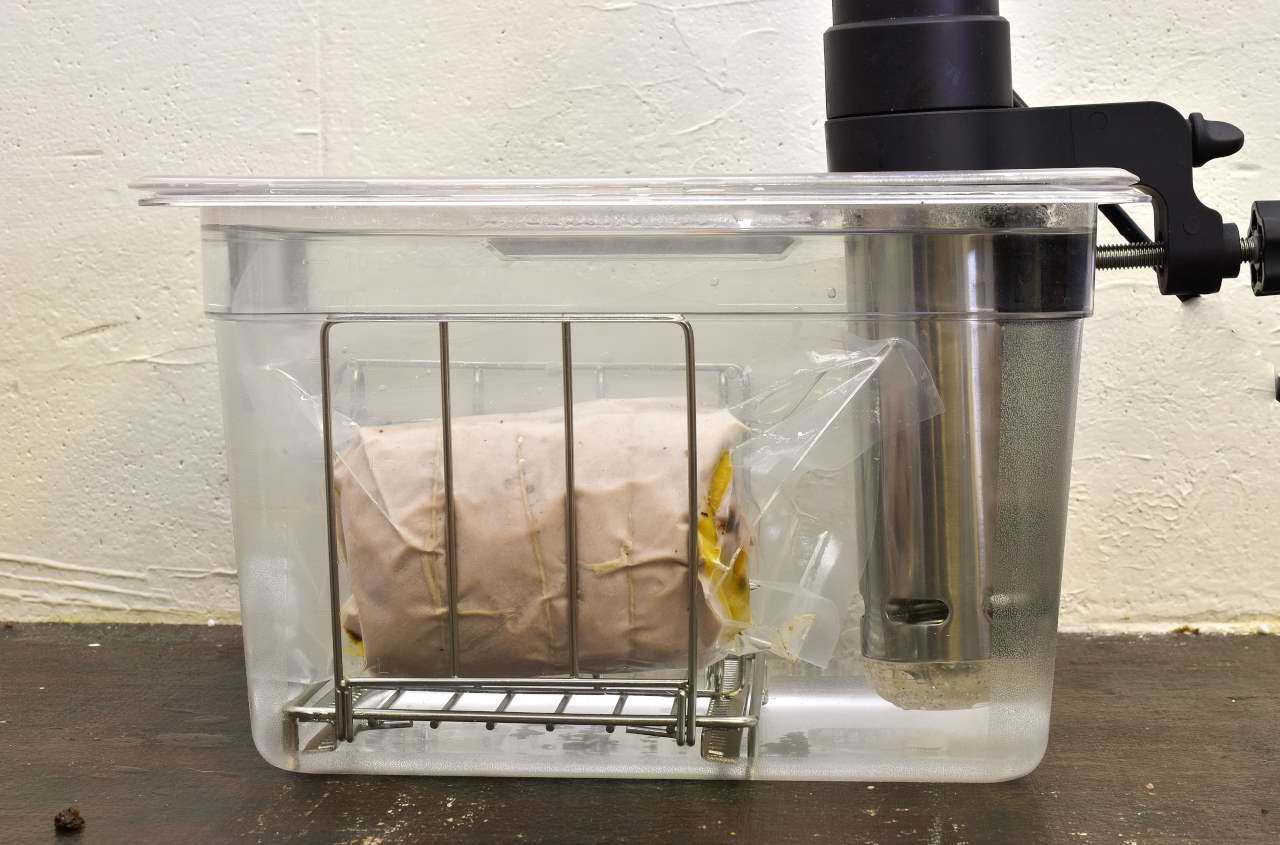 Cured beets
Peel the beet with a paring knife or vegetable peeler. Slice as thin as possible on the mandolin or mechanical slicer. Put a paper towel on a plate small enough to fit in a vacuum bag. Put a single layer of the sliced beets on the paper towel and sprinkle lightly with kosher salt and sugar. Add another paper towel and layer of beets, sprinkle with salt and sugar again. Repeat this step until you have all of the beets stacked up.

Put another paper towel on top, stage into a bag and vacuum. Allow to sit for at least one hour or overnight. If you prefer, this step can be accomplished in a sealed Ziploc gallon bag, in which case it should be allowed to cure overnight.

While the beets are curing, chop the dried plums/prunes with the walnuts in the food processor until fine. Stop when the mixture starts to “clump” in the hopper. 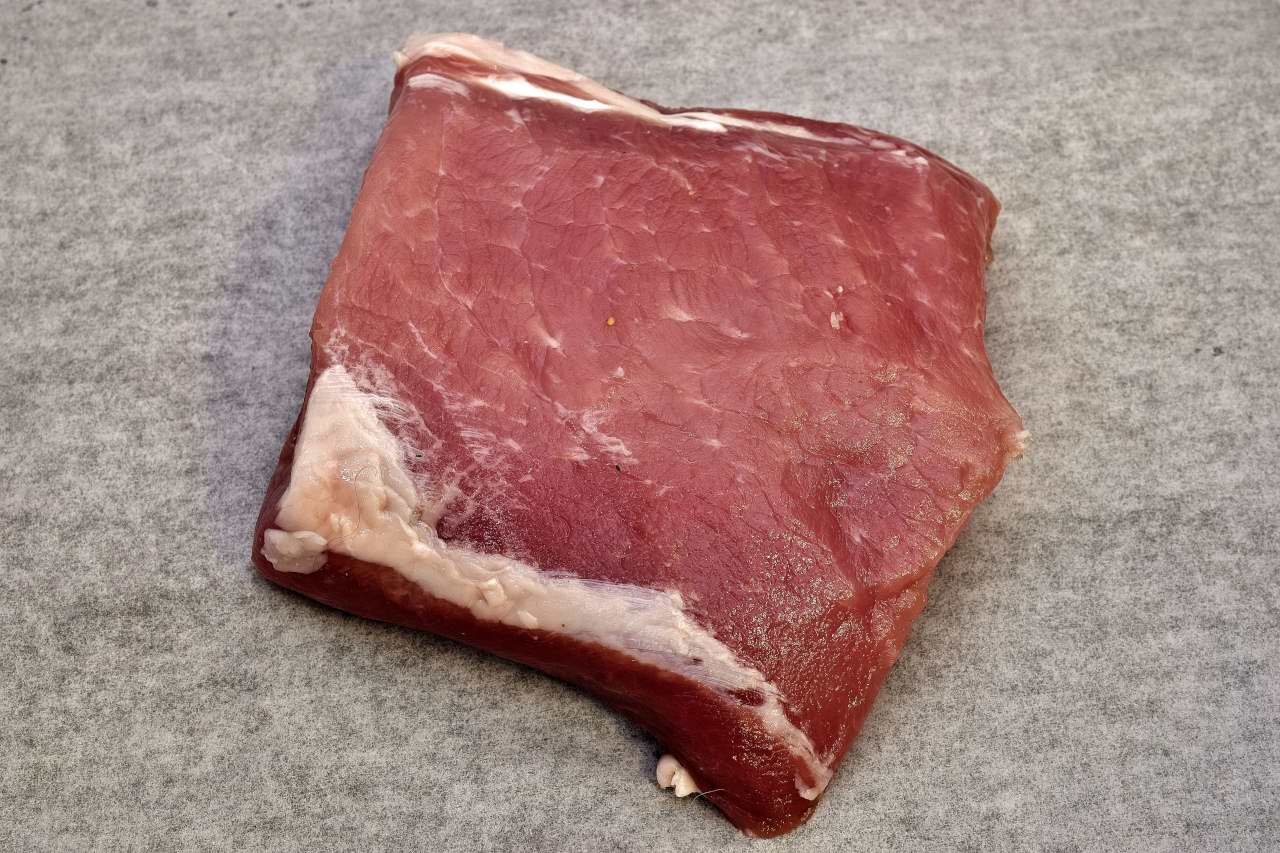 Lay the pork on parchment or butcher paper. 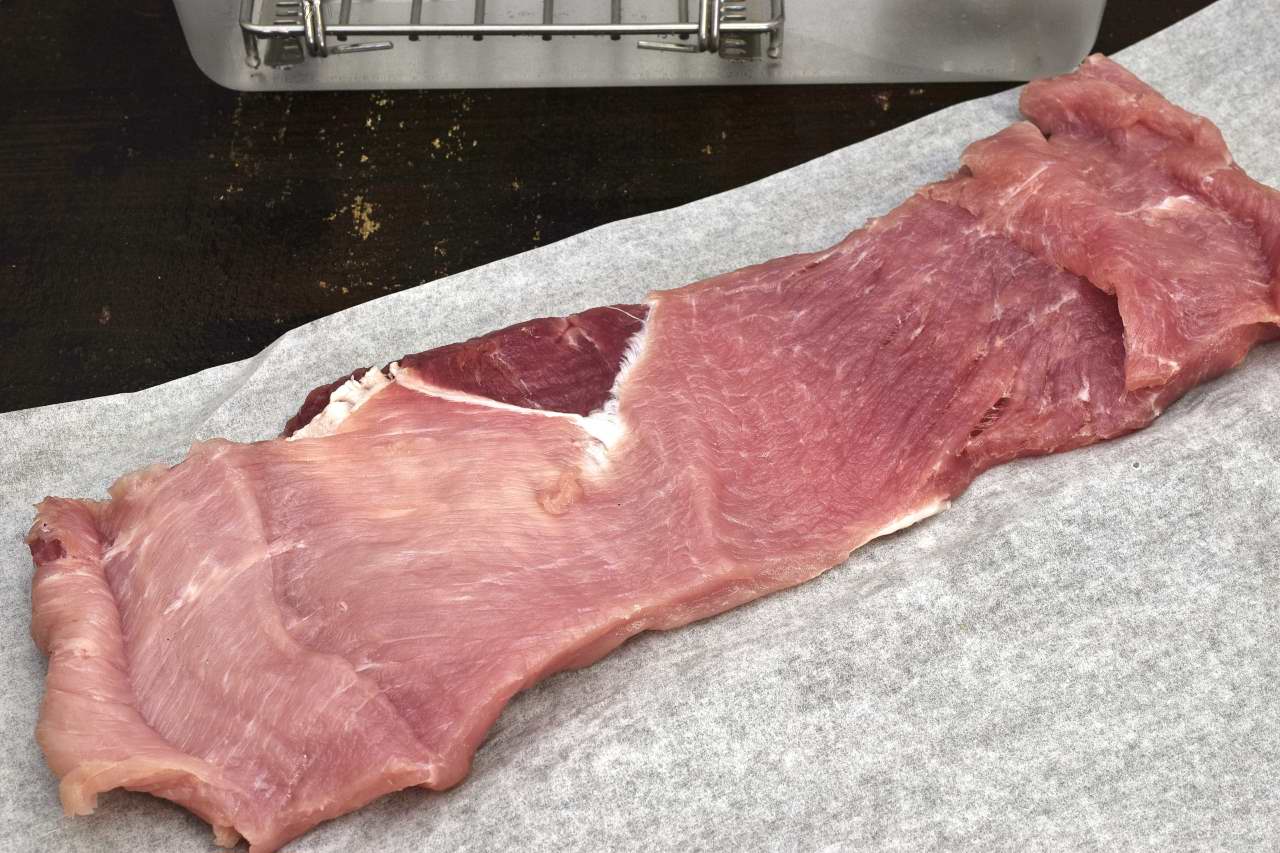 “Butterfly” the section of pork loin to double its area. Cover a solid, stable surface with plastic wrap, lay the pork on it, an cover with another sheet of plastic.

Use a meat mallet to pound out the loin as thin as possible without compromising its structural integrity. People that know me hear me say that a lot. You will know it’s too thin when you can’t pick it up without it falling apart, but it does not really have to be that thin. The thinner you can pound it, the more visible the “jelly roll” effect will be. Remove the plastic and sprinkle the pork with the kosher salt and white pepper. 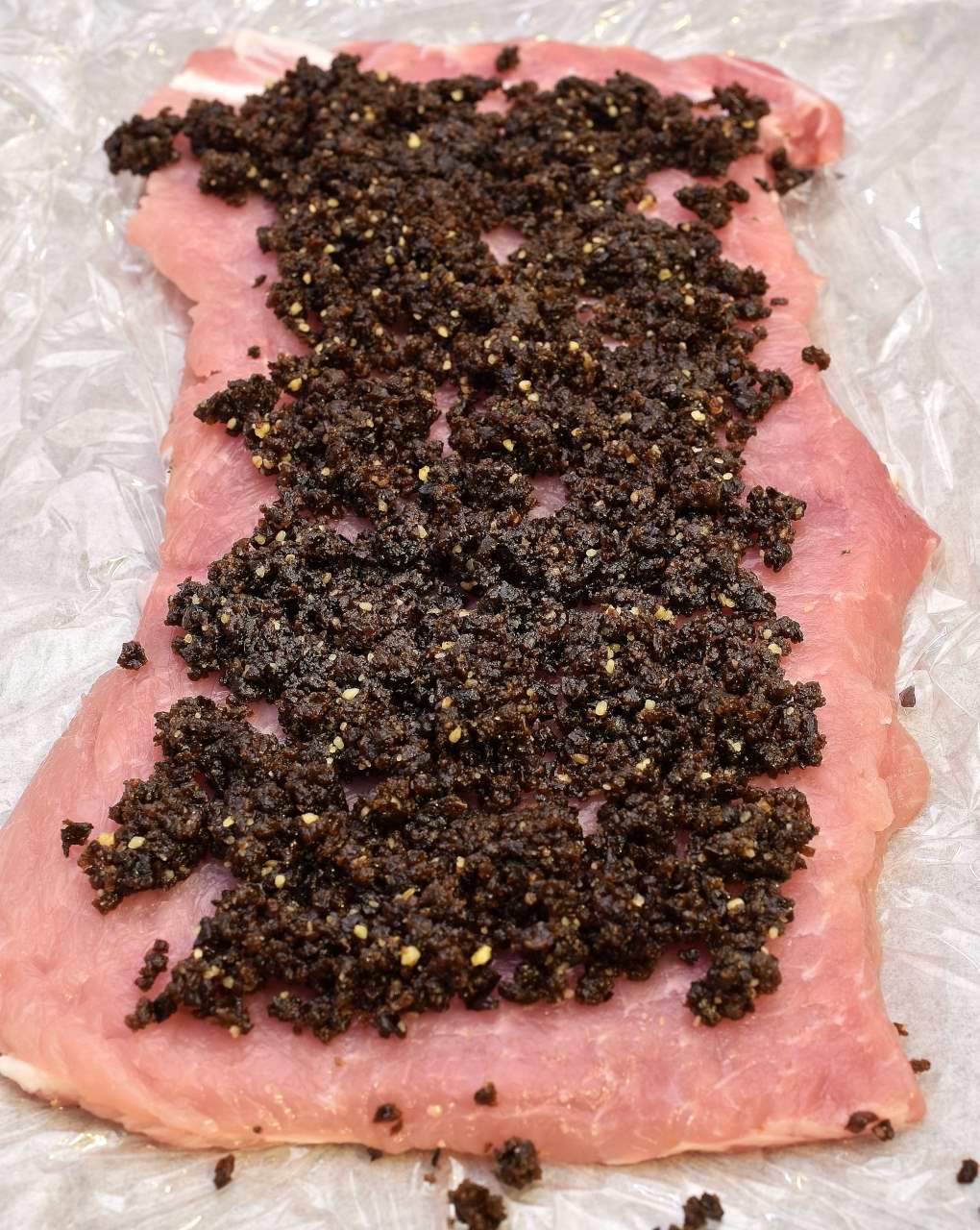 Sprinkle the plum/walnut mixture over the pork. Leave a 1″/3 cm margin at the top and the bottom. Cover with plastic and pat it down so that air does not accumulate inside the roulade. Remove the beets from the bag and pat dry. 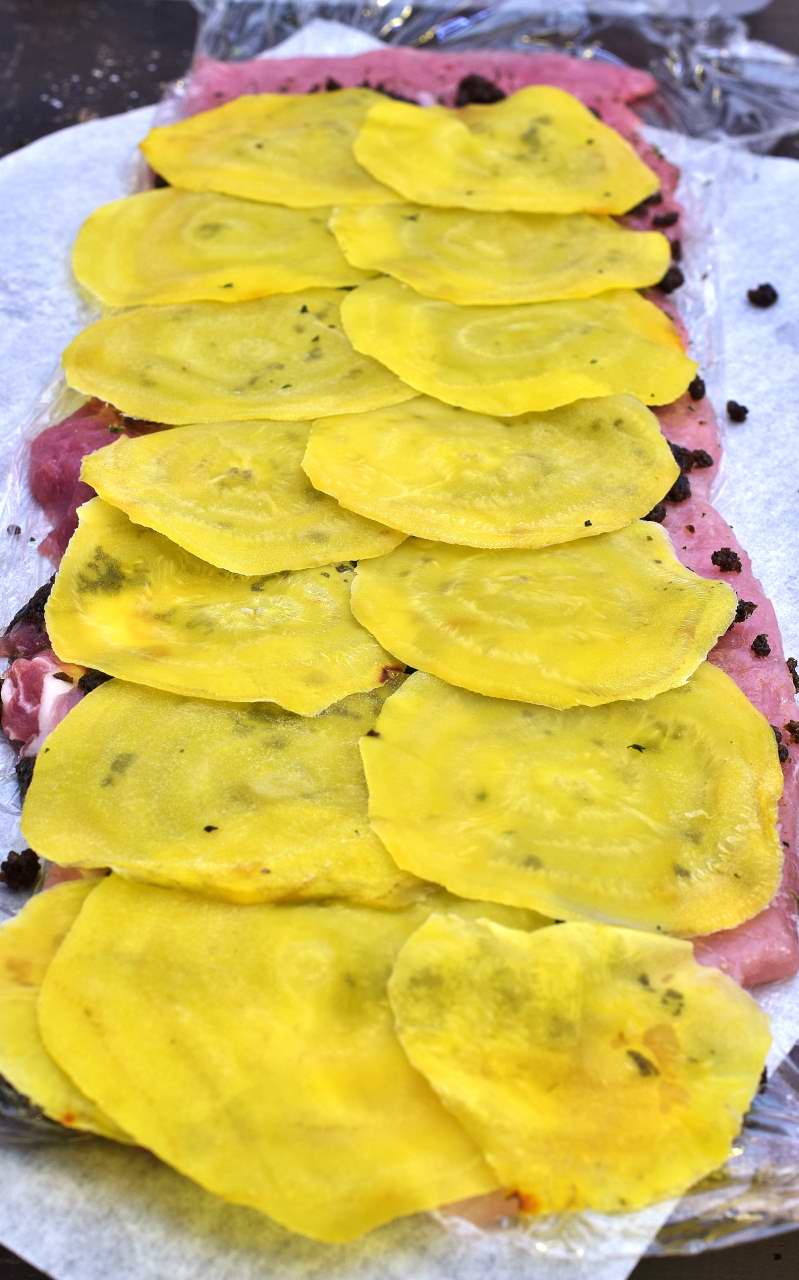 Shingle the beets over the plum mixture and leave a margin on the top but not on the bottom, as shown. 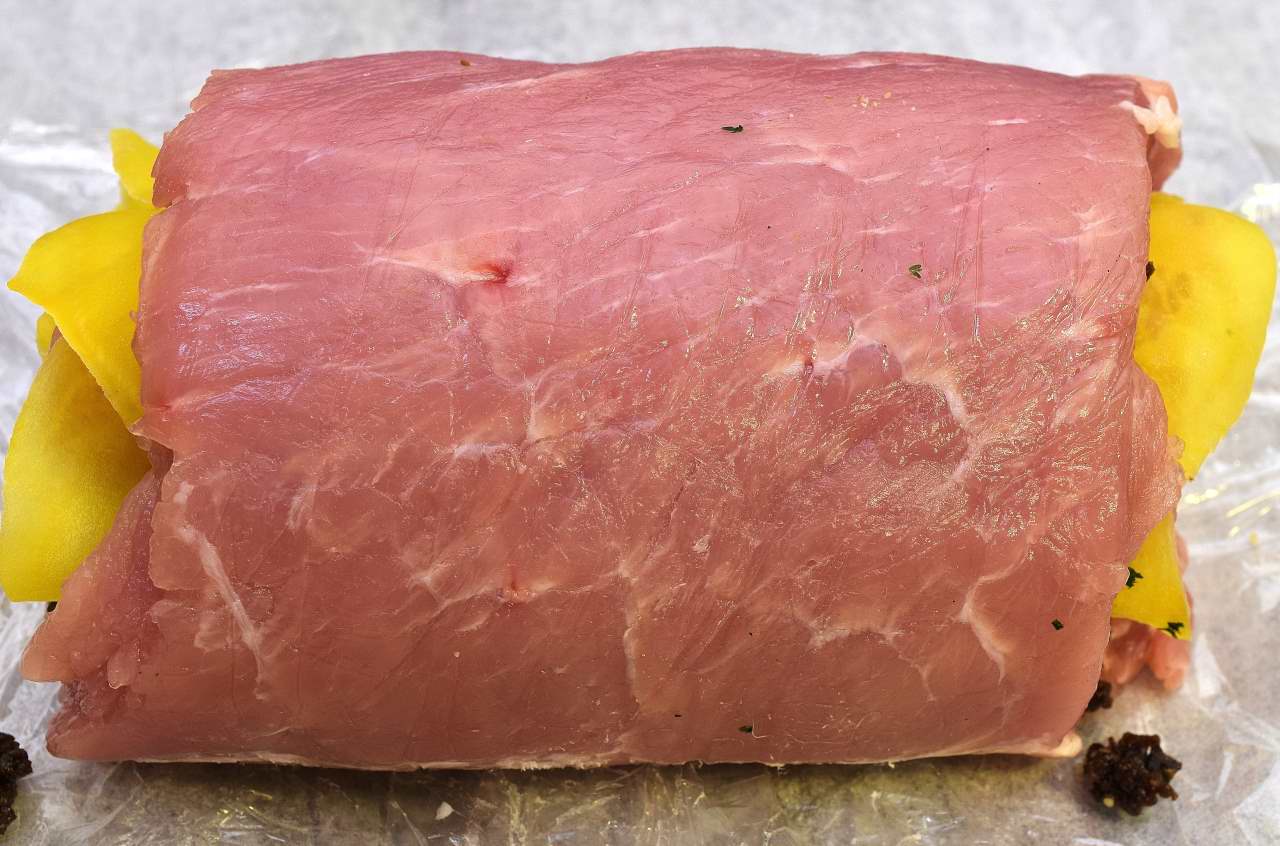 Gently roll up the pork, uniformly but very loosely. Do not roll tight or press because the filling will all be squeezed towards the top. This is a common mistake. 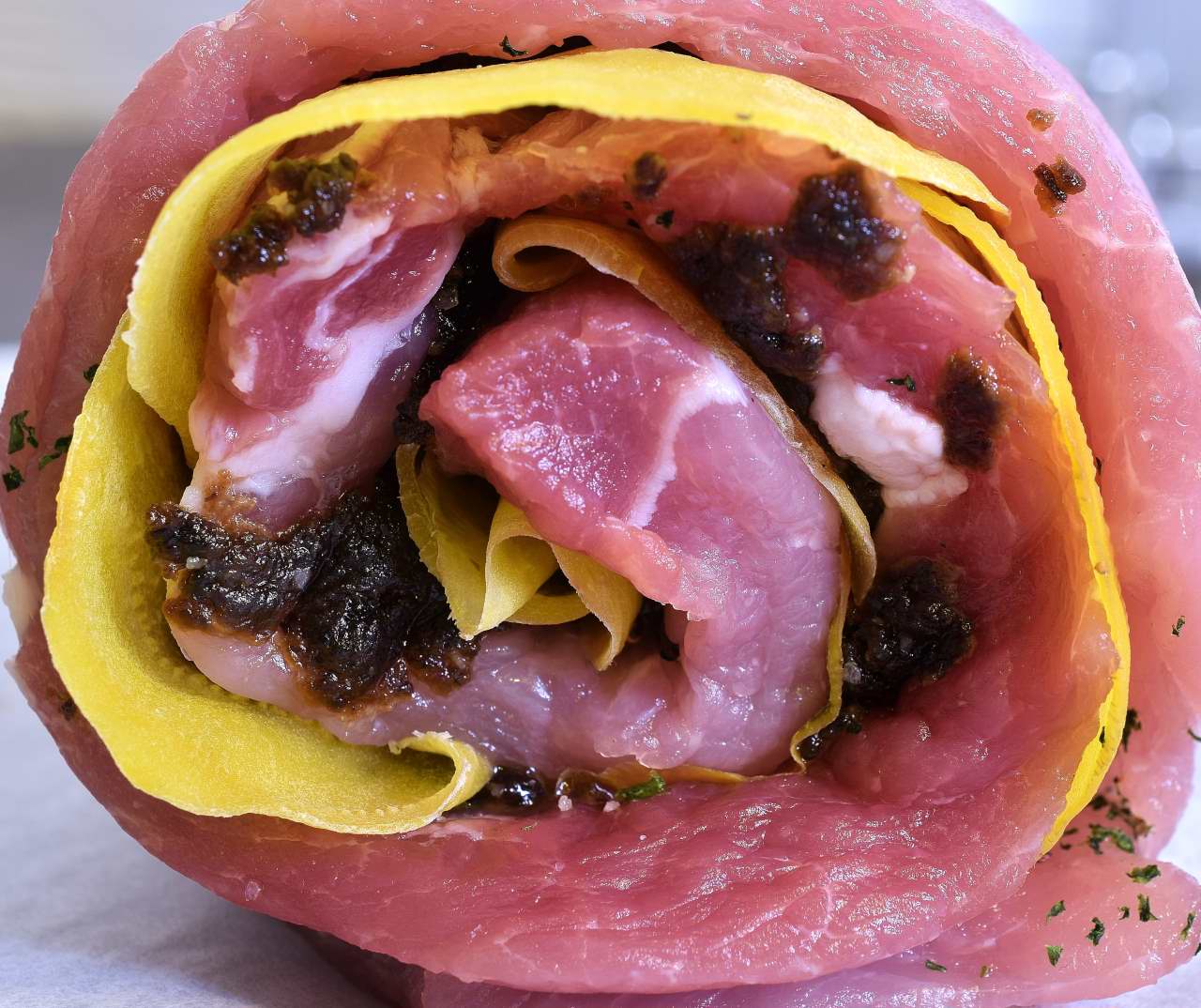 Tie the roast with butcher’s twine, but, again, not tight–just secure enough to resist changing shape when we apply the vacuum in the bag. 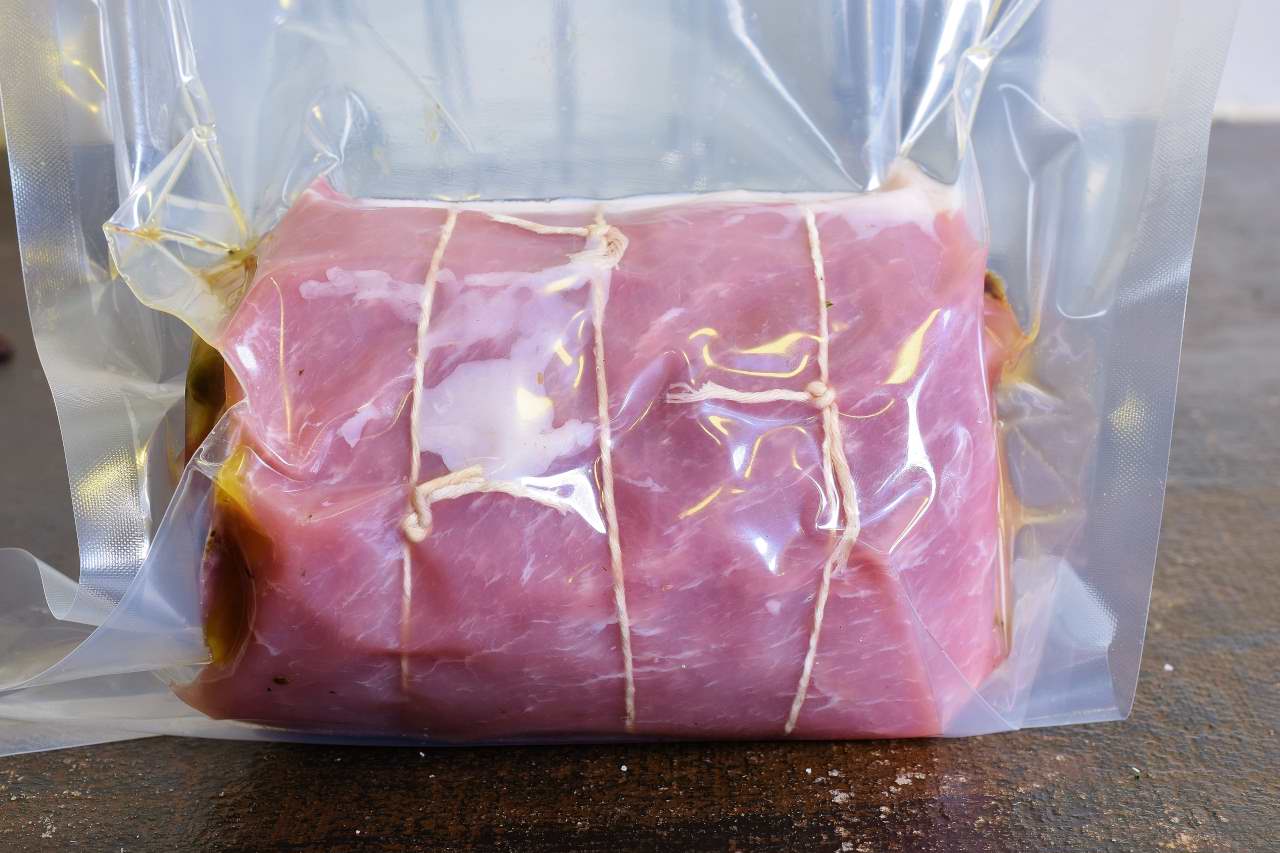 Vacuum and seal the roast. 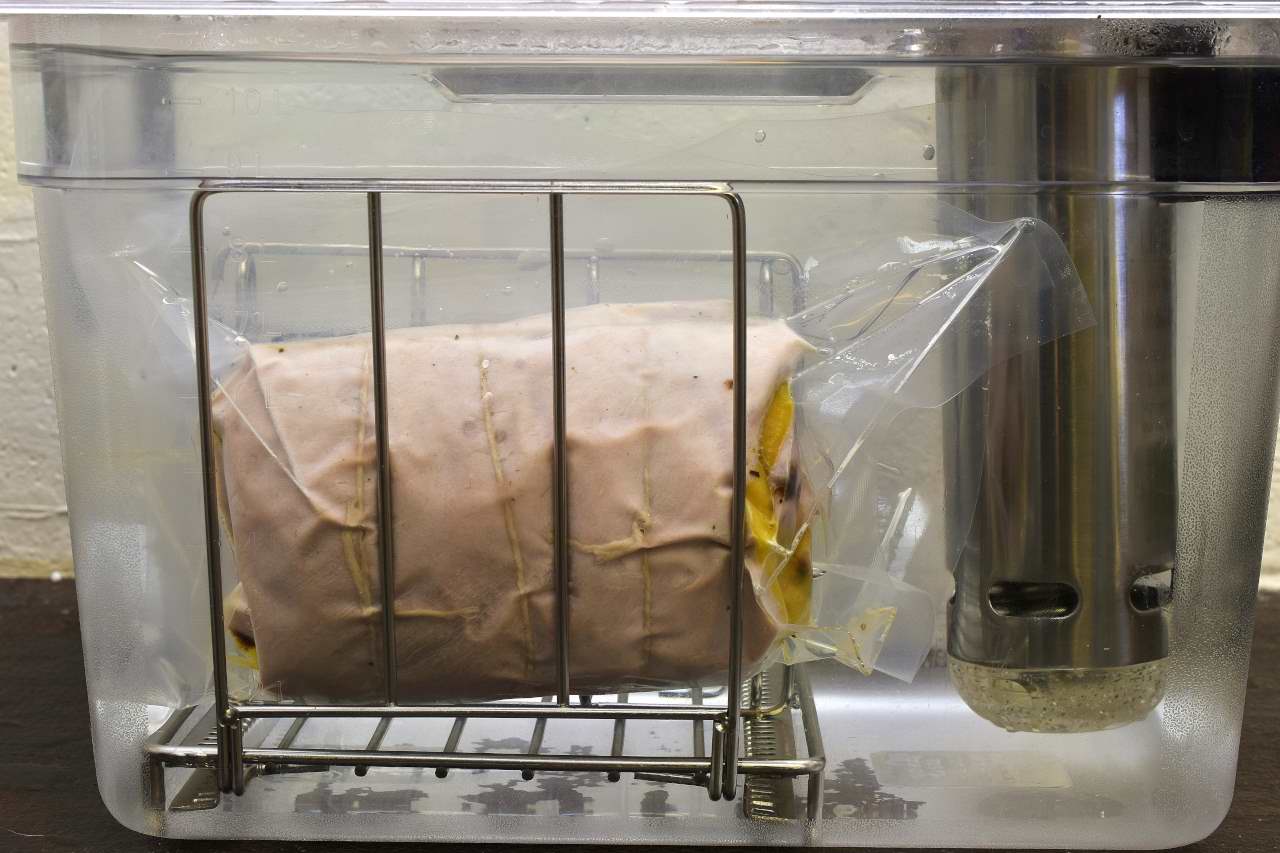 Macedonian salad
Macedonian salad is what we called “Chopped Salad” before we called it chopped salad. Purists and authenticists debate the ingredients, but there is no need to bicker. I have never discussed the salad with an actual Macedonian, but there are versions that include fruits instead of vegetables. This suggests to me that there is some latitude for interpretation. 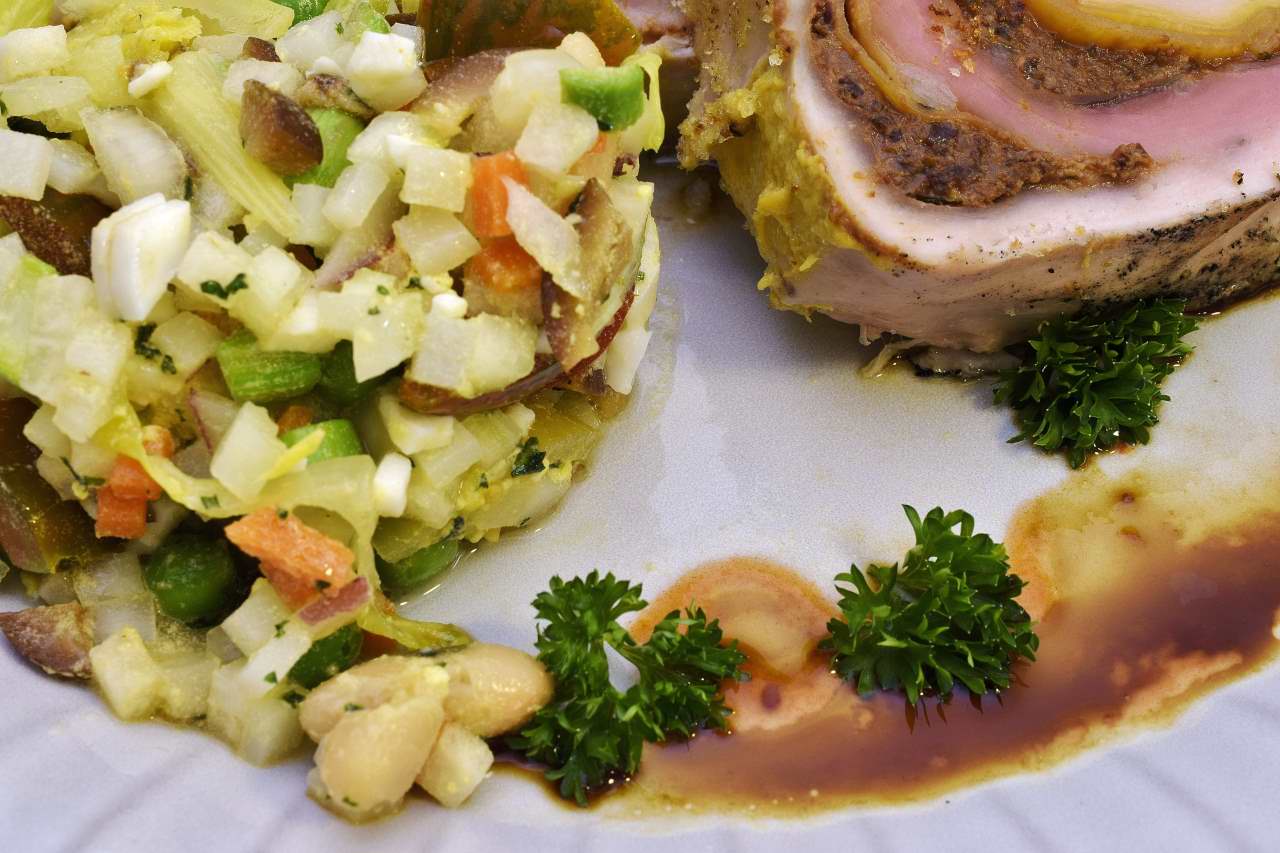 Bring 1 quart/1 liter of water to an actual, furious boil and add the celery, carrots, and red potato. Boil for thirty seconds, drain and shock in iced water. Drain again. Add the rest of the listed ingredients. If you need to subtract some or add some, I assert that it will still qualify as what at least SOME French chefs would call Salad Macedonie. 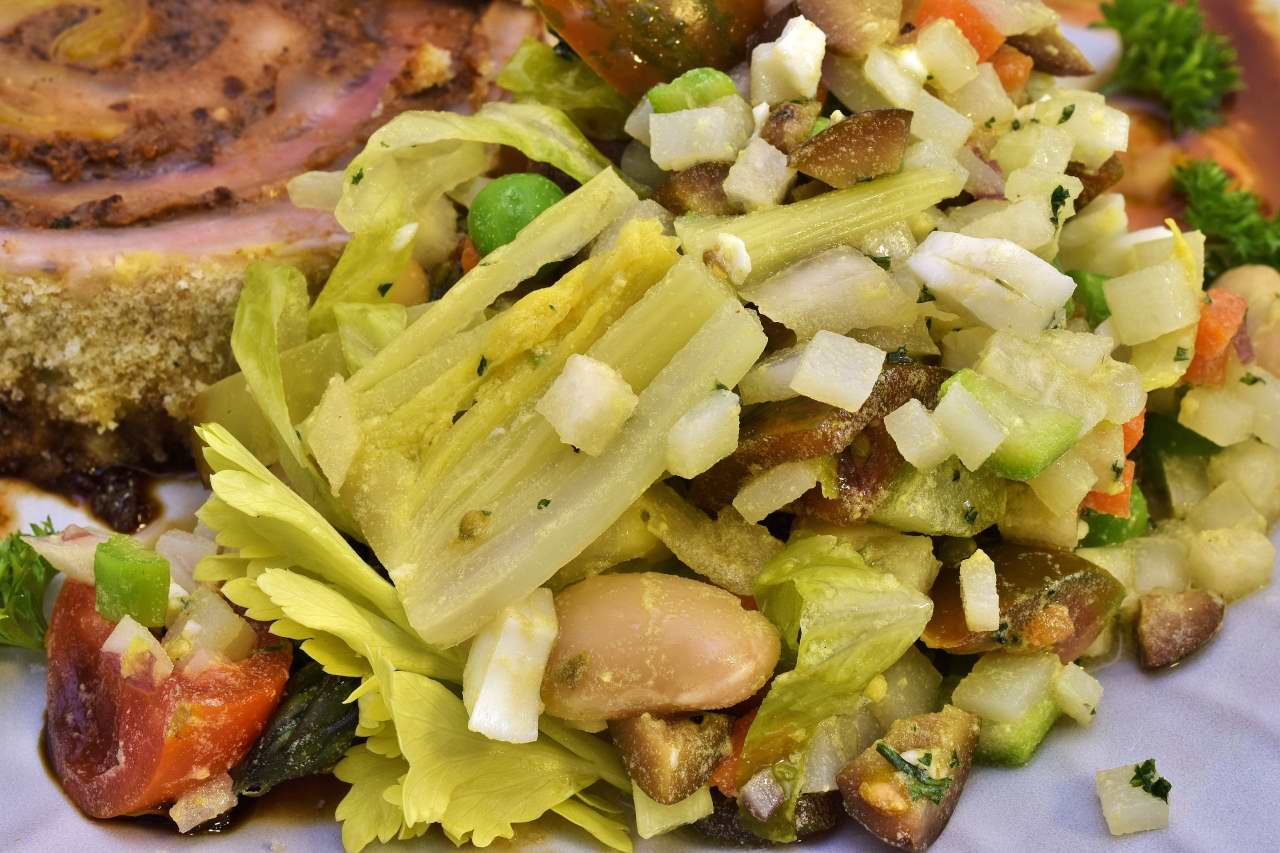 Set your oven on the broiler/salamander function or preheat the oven to 450 F/232 C.

Paint the top with the Dijon mustard, sprinkle with bread crumbs and dot with the melted butter. Put the roast on the sheet pan and stage into the salamander/oven. 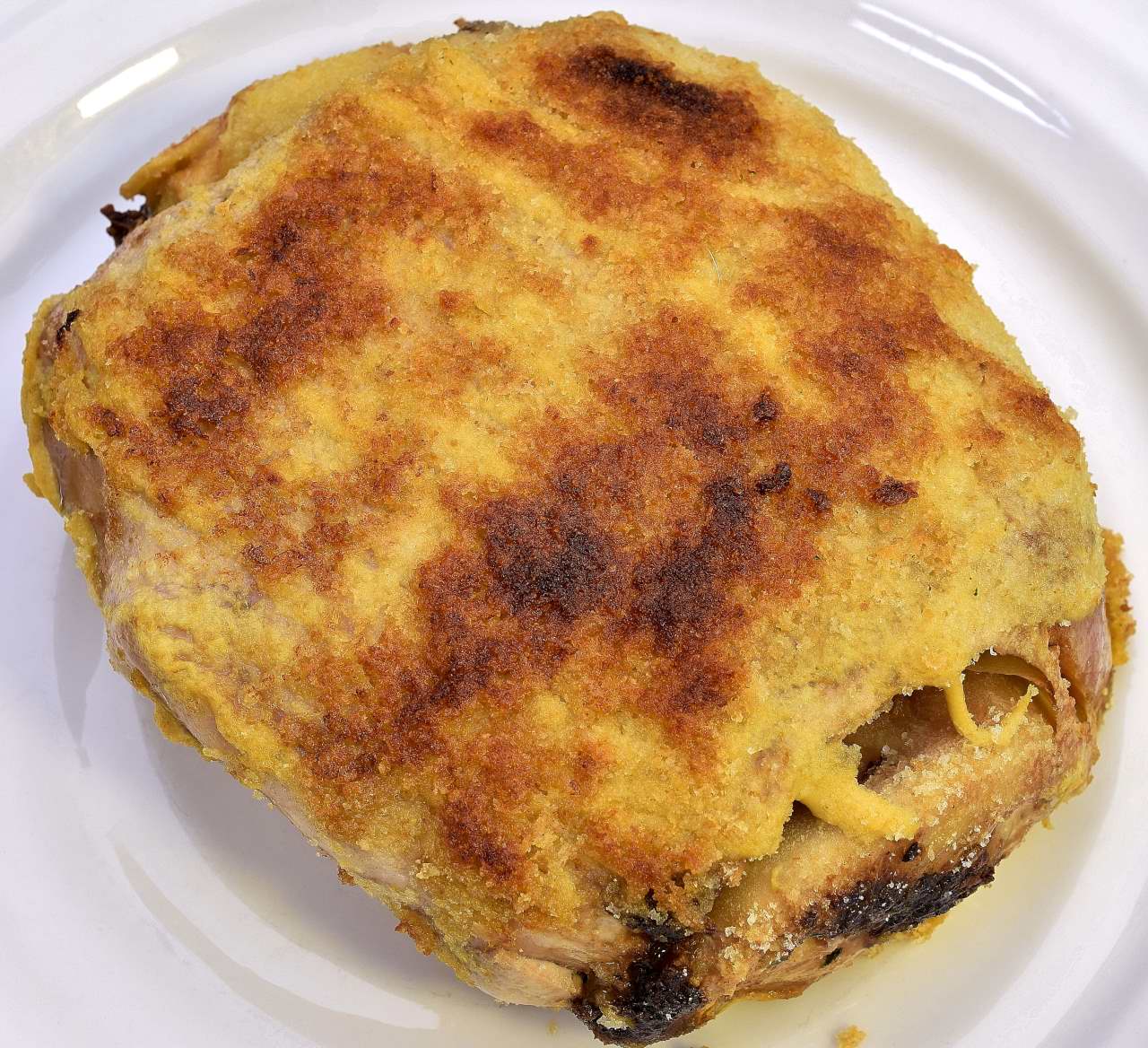 Monitor closely until the crust forms on the top and browns. Cut off the very end of the roast and cut straight slices. 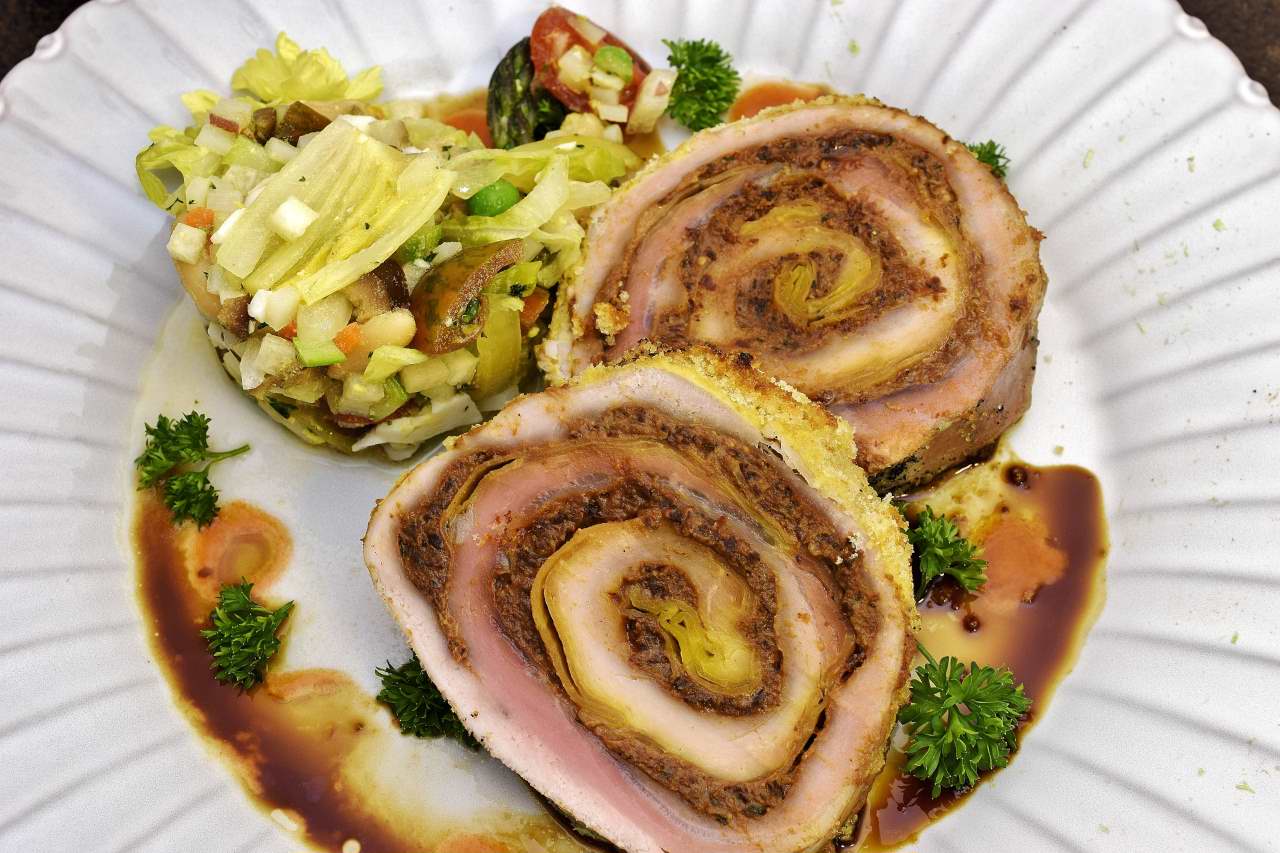 You can see the golden beet core that we created, and that the beets also continue for the full length of the roulade. 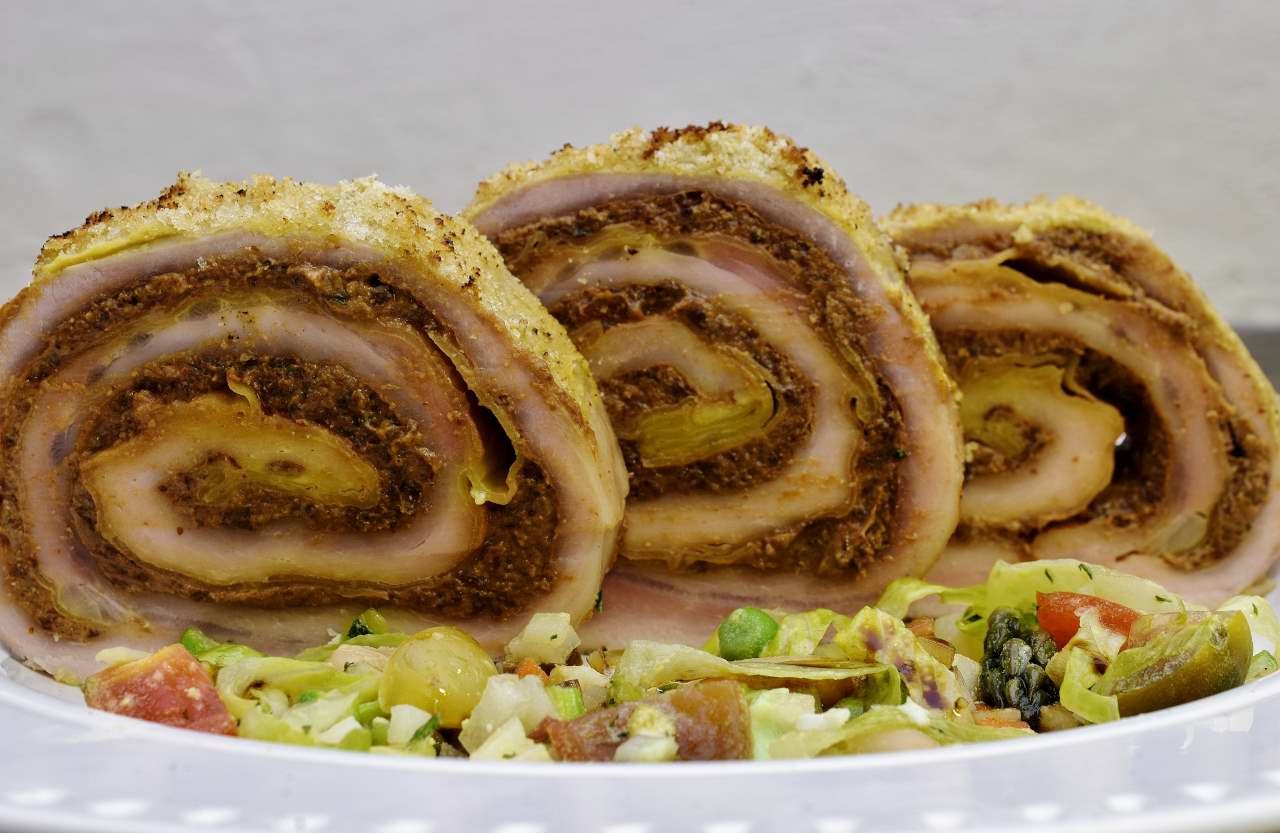 It is no coincidence that restaurants hesitate to put items like this on the menu. We refer to this sort of dish as having “too many moving parts.” But what is bad for restaurants can be fun at home. If you are planning on opening your own restaurant, you may want to disqualify this recipe as a candidate for your Bistro specials list. 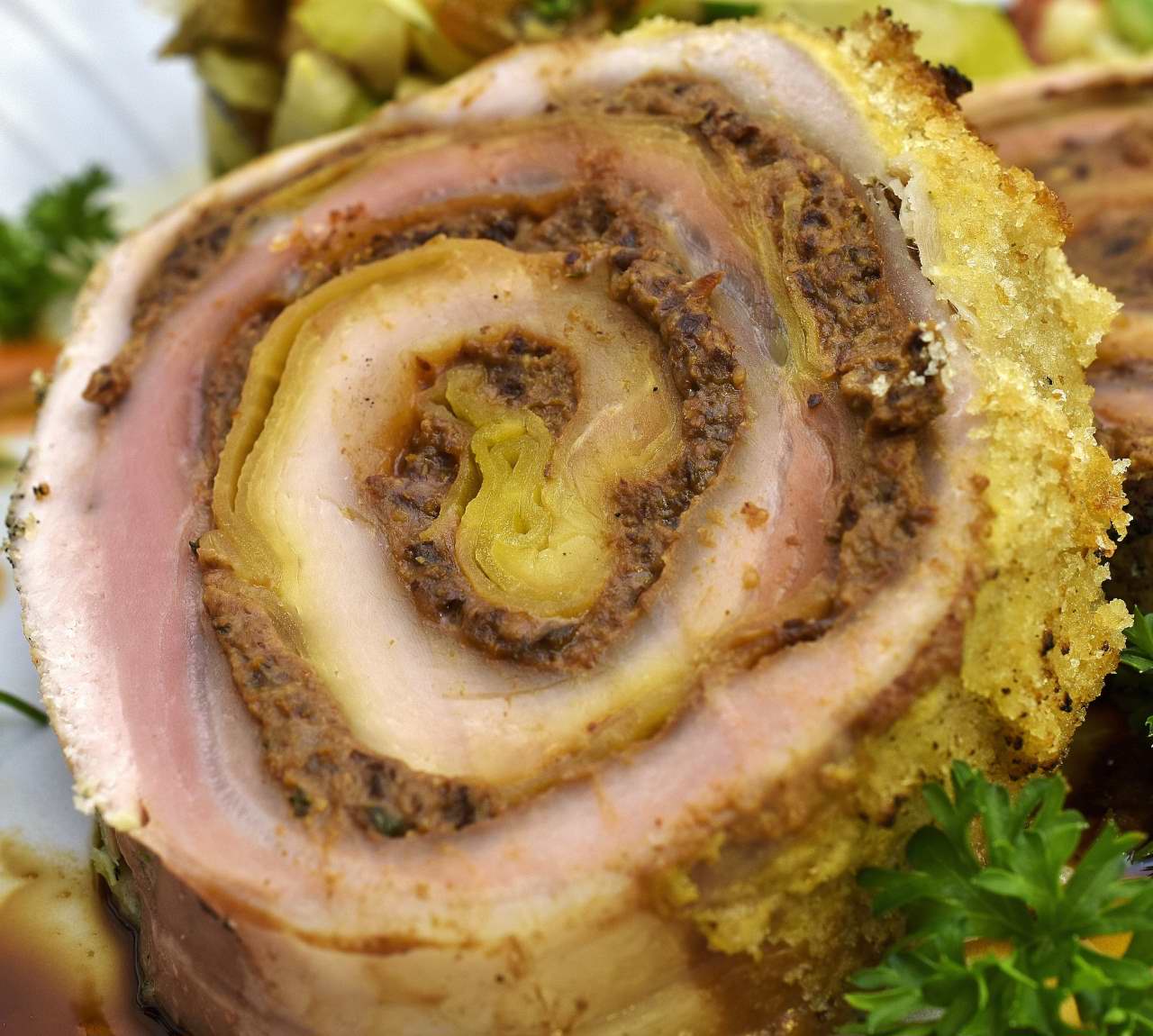 Chefs dread requests for stuffed entrees. Time and labor intensive, the ingredients are numerous and varied. When the evening's first stuffed dish is delivered to table, other diners put down their menus, point and say "I'll have THAT." This makes it difficult to predict how many orders will be sold. Running out is not an option.

With each passing order, anxious cooks tremble at the prospect of desperately scurrying around to make more at a time when they are already busy. Even so, the visual impact is significant and appealing to diners. Stuffed items sell, so resistance is futile. People want what they want.

Fortunately, we don't have to make thirty orders. Three or four is plenty.