Big box stores offer discounted primal cuts of meat, among them whole pork loins. This article explains how to make the most of the savings.

The product: stem to stern.

Pigs, cows, sheep and even humans are almost identical anatomically. For some reason, the same cut on a pig has a different generic name than the corresponding cut on a steer. This can be very confusing to the consumer. Whether intentional or otherwise, it does tend to perpetuate the public’s misunderstanding of bovine and porcine anatomy–a mystique securely guarded by butchers. 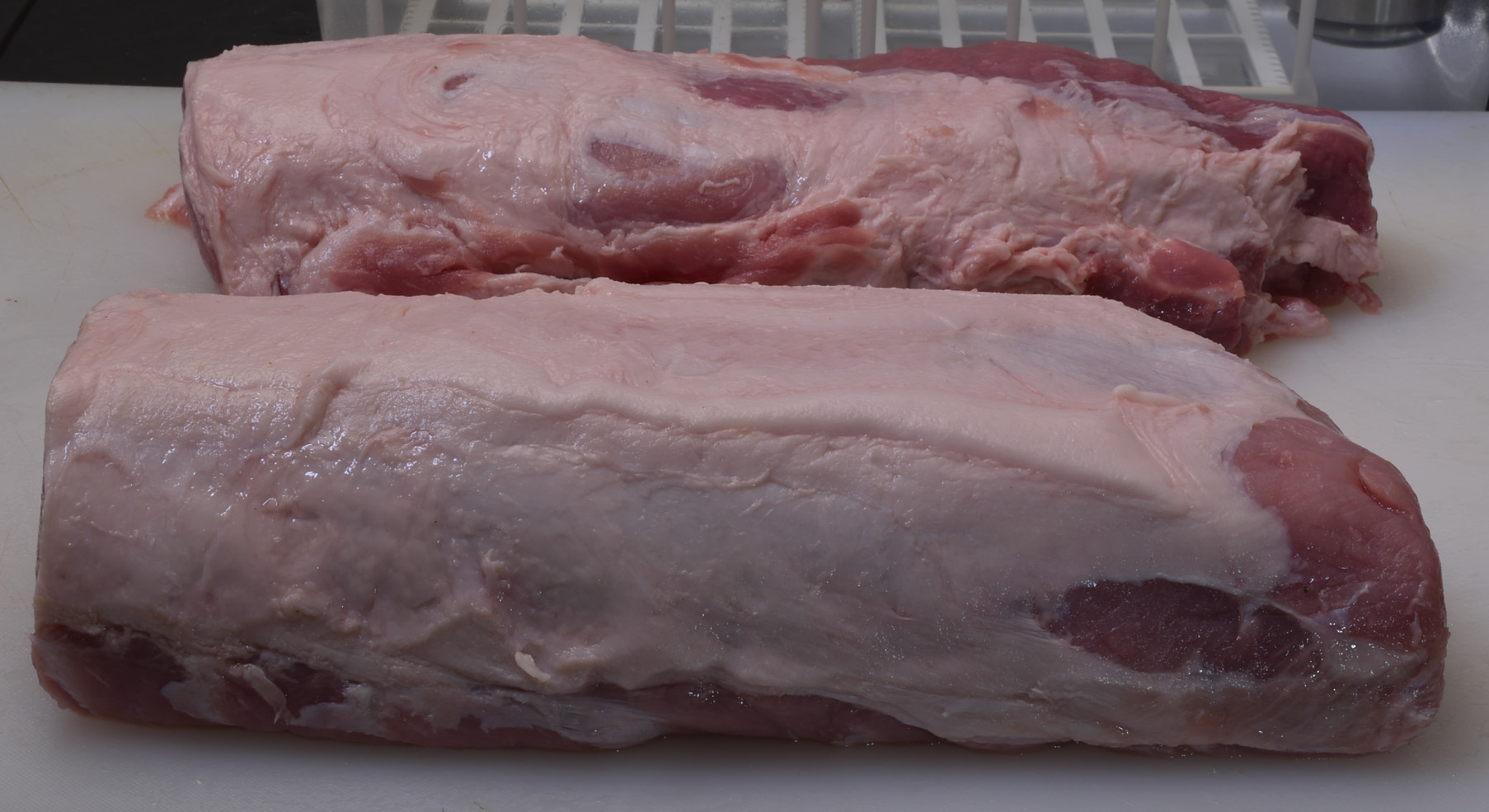 No matter, the first thing we want to do is cut it in half. This makes it easier to handle. Let me explain exactly what we are looking at in the frames below. 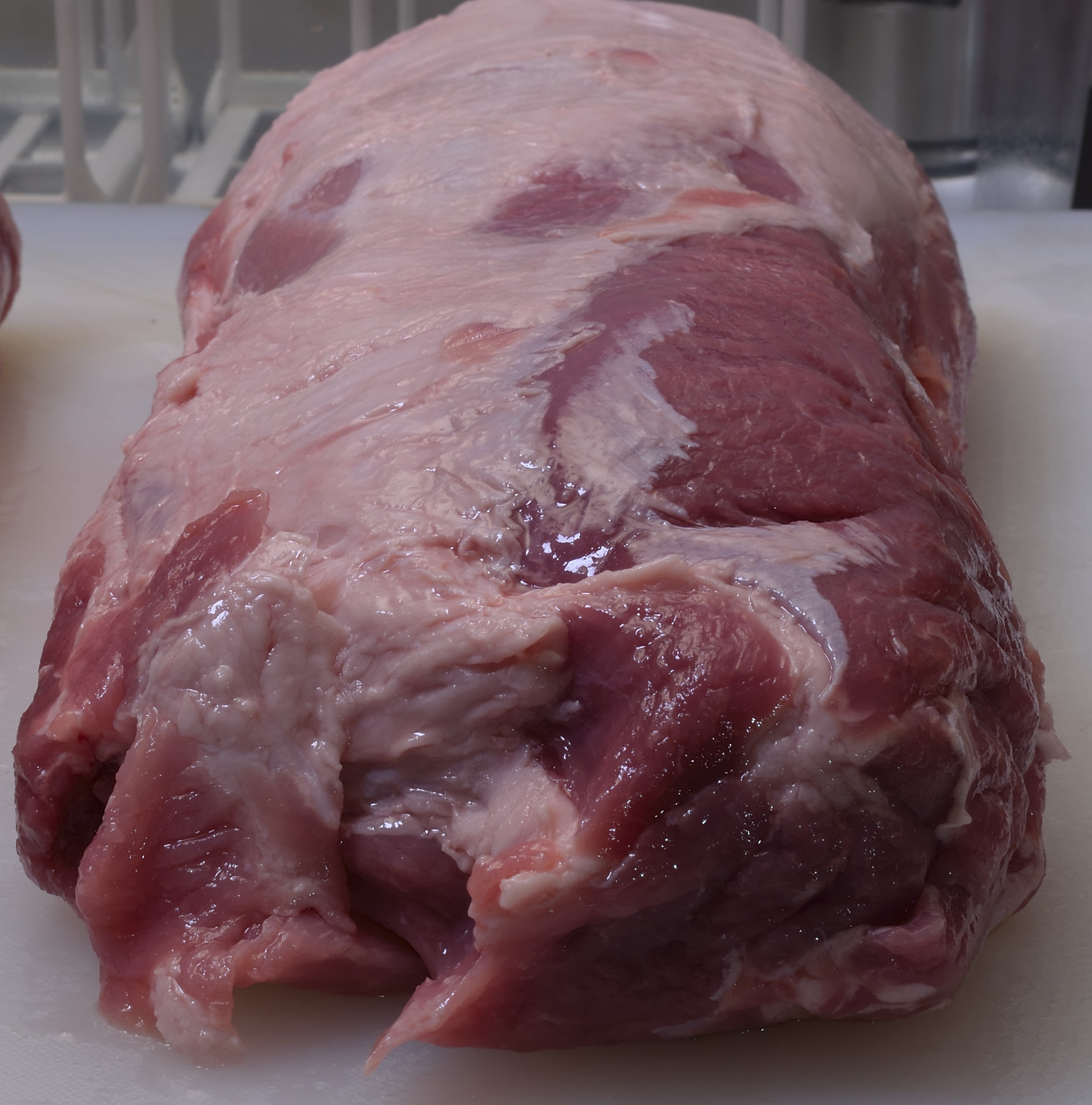 Above: this is where the pork loin connects to the shoulder of our porcine friend. As seen, it starts just behind the pig’s collar and extends down the spine towards the hind end of the animal. This is where the confusion begins. As ungainly and formless as this cross section appears, this cut is actually one of the most desirable cuts from the pork loin. On a steer, it would be referred to as a Delmonico steak, which proceeds to become the rib eye or prime rib primal cut (on a steer). 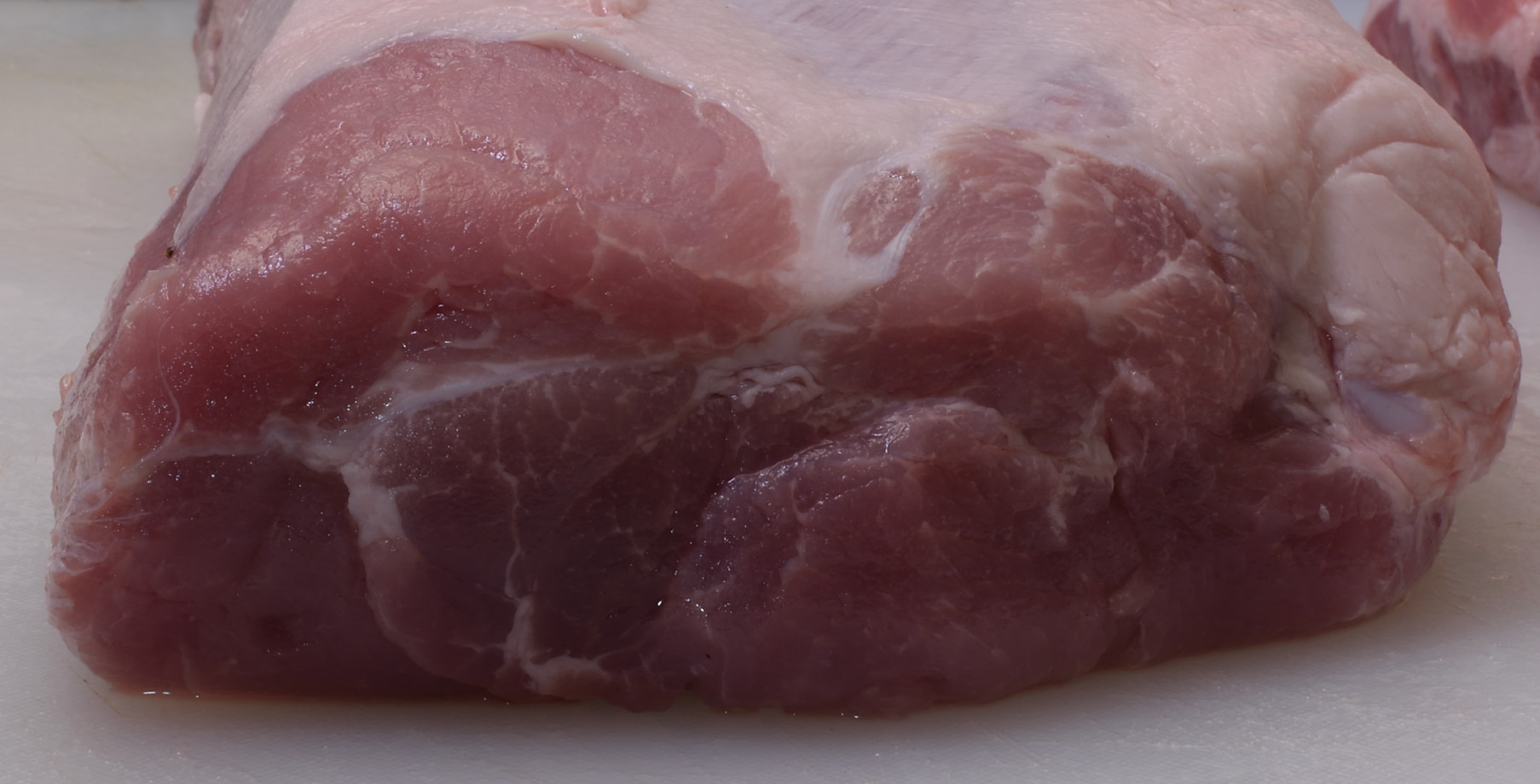 Above: this is a cross section of the other end–where the loin intersects with the animal’s hip/hind end, as it were. On a steer, this cut would be referred to as the boneless short loin, a.k.a. New York, strip loin or even Kansas City steak.

Above: as logic would dictate, this is a view of the “center cut.” If the bones had been left attached, pork chops would be cut from this area. This is called the longissmus muscle–it runs the entire length of the pork loin. At each end it is surrounded by various other connective muscles. Both ends are fattier than the center cuts.

The bones are commonly removed from the whole loin to become “baby back ribs.” There are reasons for that. For one thing, people will pay at least twice as much per pound for the baby backs as they will for the meat. That’s how popular BBQ is! But that is not the only reason. Unlike on a steer, the loin section has challenges. It tends to be dry and even somewhat tough. It is too lean to be used for pulled pork–the shoulder is best for that. It doesn’t have the finger-licking appeal that spare ribs offer.

When cooks are disappointed with their pork loin recipe, they usually assume that they made a mistake in preparation or that they failed to utilize a proper marinade. The good news is that it’s not usually the practitioner’s fault. Marinades will not improve this cut–not much will. You could say that pork is upside down from beef. The most desirable cut on a steer is just about the least desirable cut on a pig.

But do not give up hope! Sous vide is going to help us improve our results.

I will not reference the idiom about the skinning of cats, but I will tell you there are a lot of different ways to portion out the pork loin. It just depends on what you plan to use it for. You should decide in advance what you DO plan to use it for, at least within certain boundaries.

We wanted to do at least one recipe for pork cutlets and their Japanese cousin, Tonkatsu. There is also always an interest in pork roasts, so we decided to create those two basic specifications.

Note: as I mentioned, the loin has a tendency to be dry. The greater the relative surface area of a cut, the more moisture it is going to lose whether it is processed using sous vide or not. The cuts from the ends have the most moisture and the highest fat content, so they have a greater tolerance for being cut into individual portions. Roasts can be cut into individual portions for finishing AFTER processing–they are simply sliced into cutlets for breading and frying, etc. I discuss this at greater length in individual recipes. 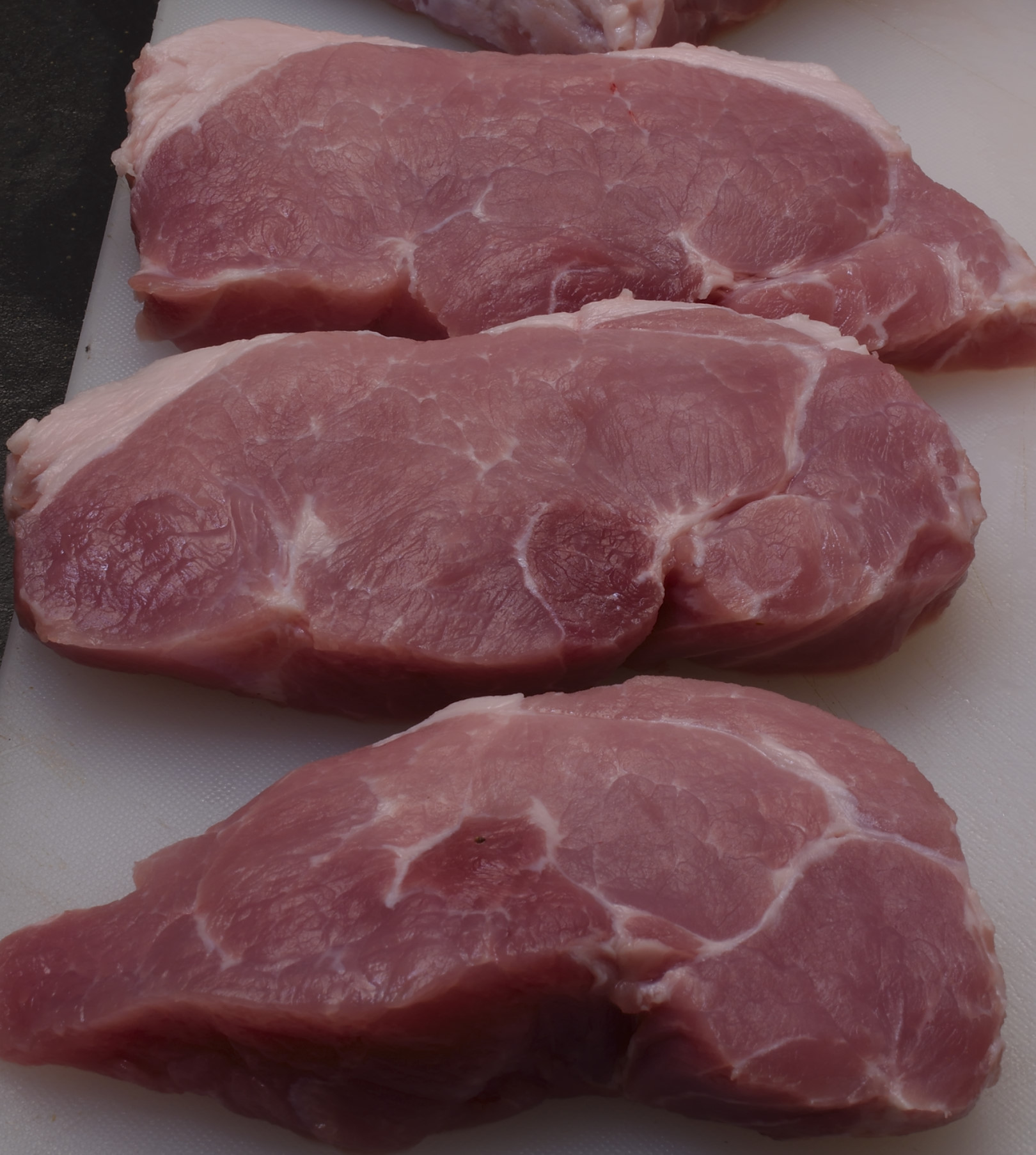 Three steaks from the hind/sirloin end…. 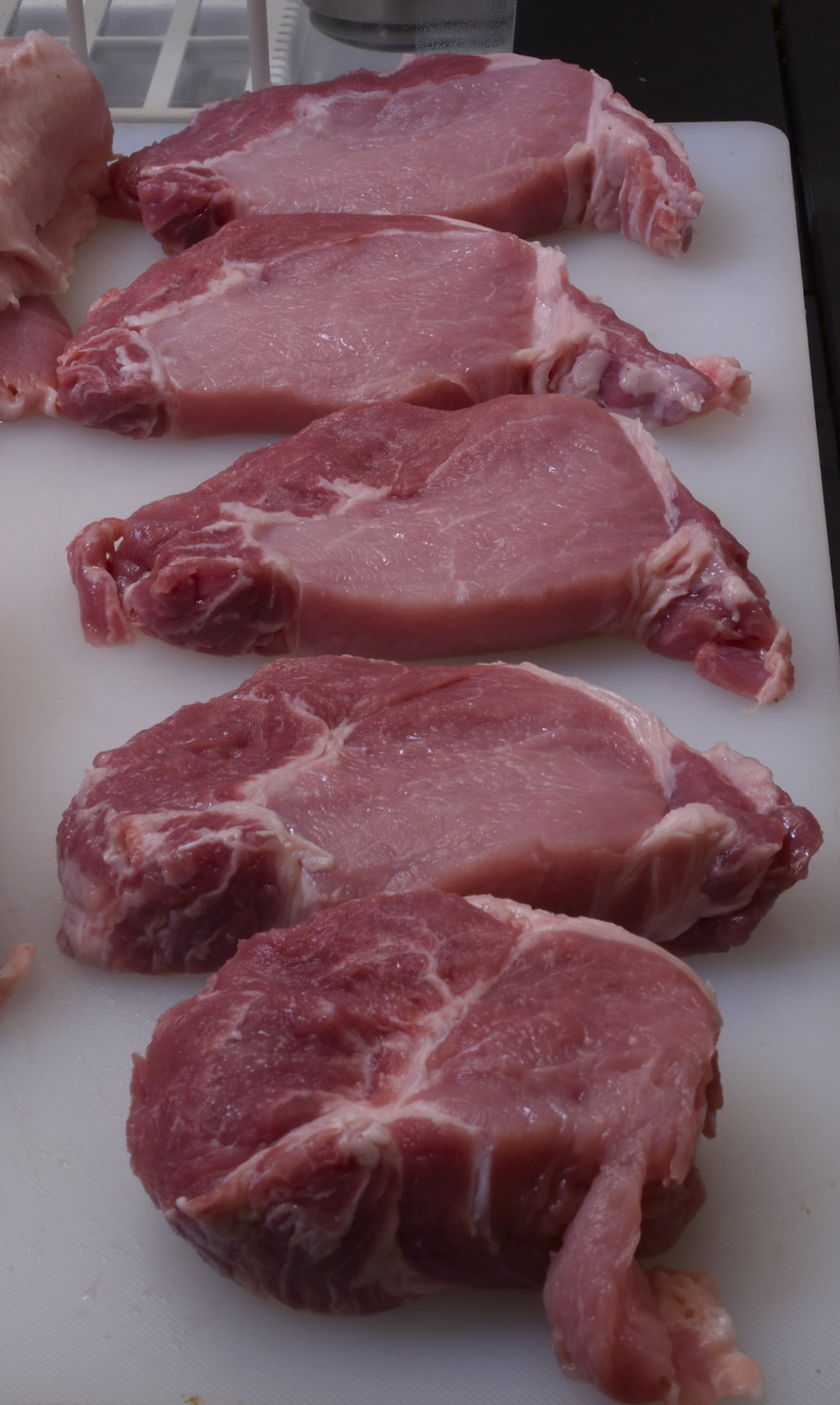 and five steaks from the shoulder/rib eye end. That ugly one at the bottom is that very first cut–the Delmonico (on a steer) that I mentioned earlier. 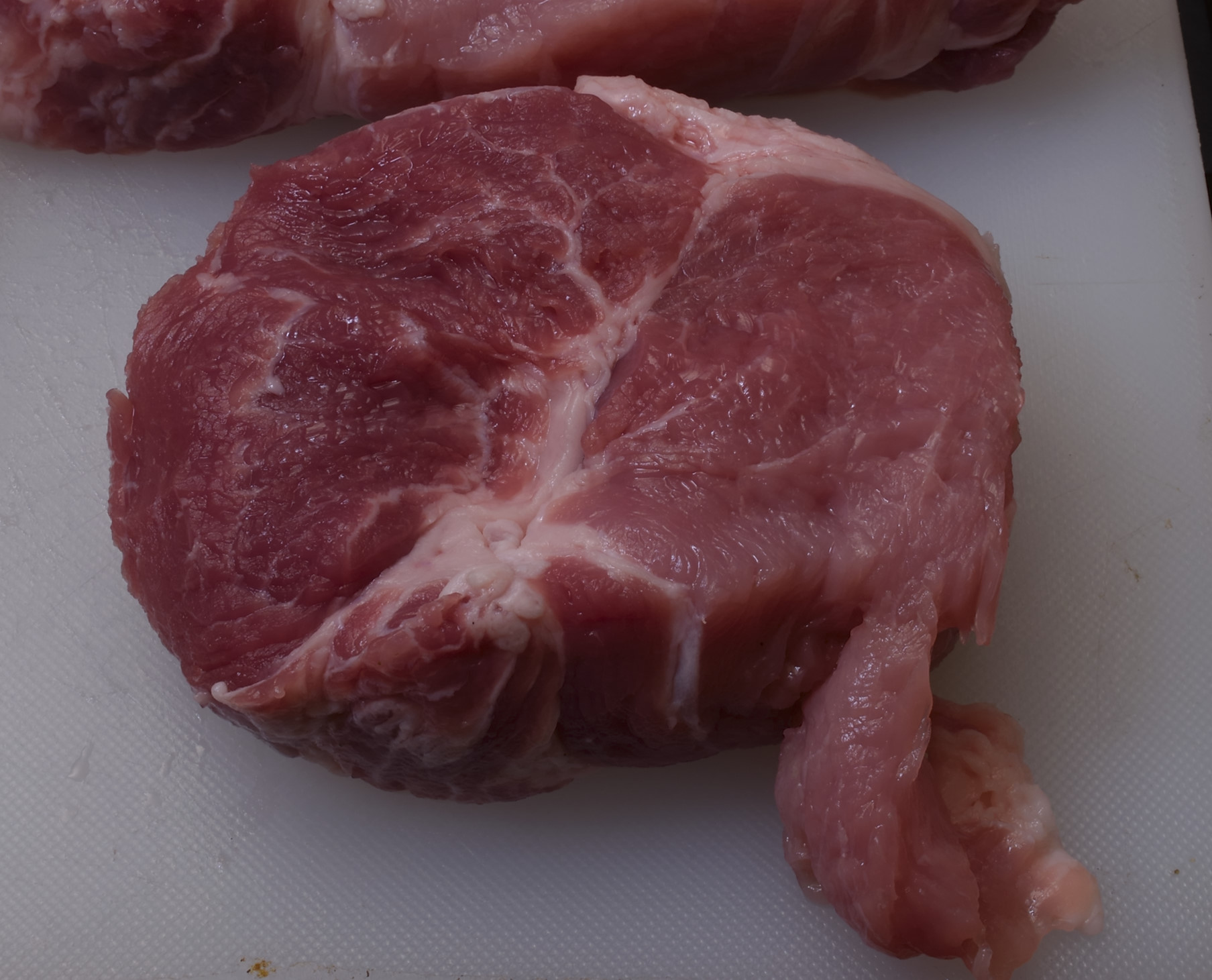 For me, this cut has special status. I decided to share the secret with you because it is unlikely that we will ever have to vie against each other for it.

Above: two roasts from the front quarter/rib eye….

Above: 2 roasts from the hind quarter. 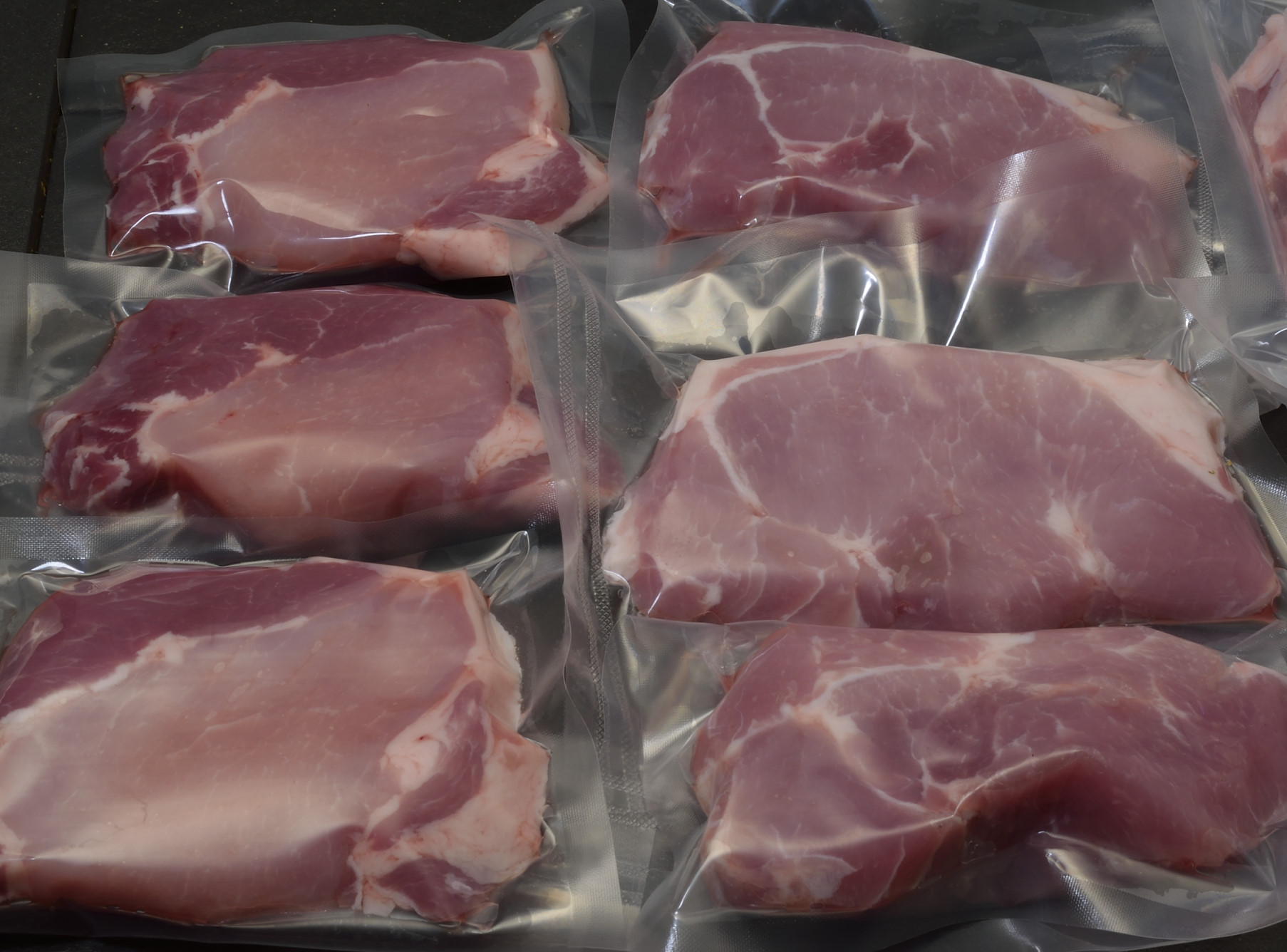 Vacuum seal the individual pork medallions in separate bags. One piece per bag makes it easier to cold shock later. It makes them easier to organize and store in the refrigerator. It also allows you to choose just how many cutlets you want to make for a particular situation without exposing all the other pieces to the elements. 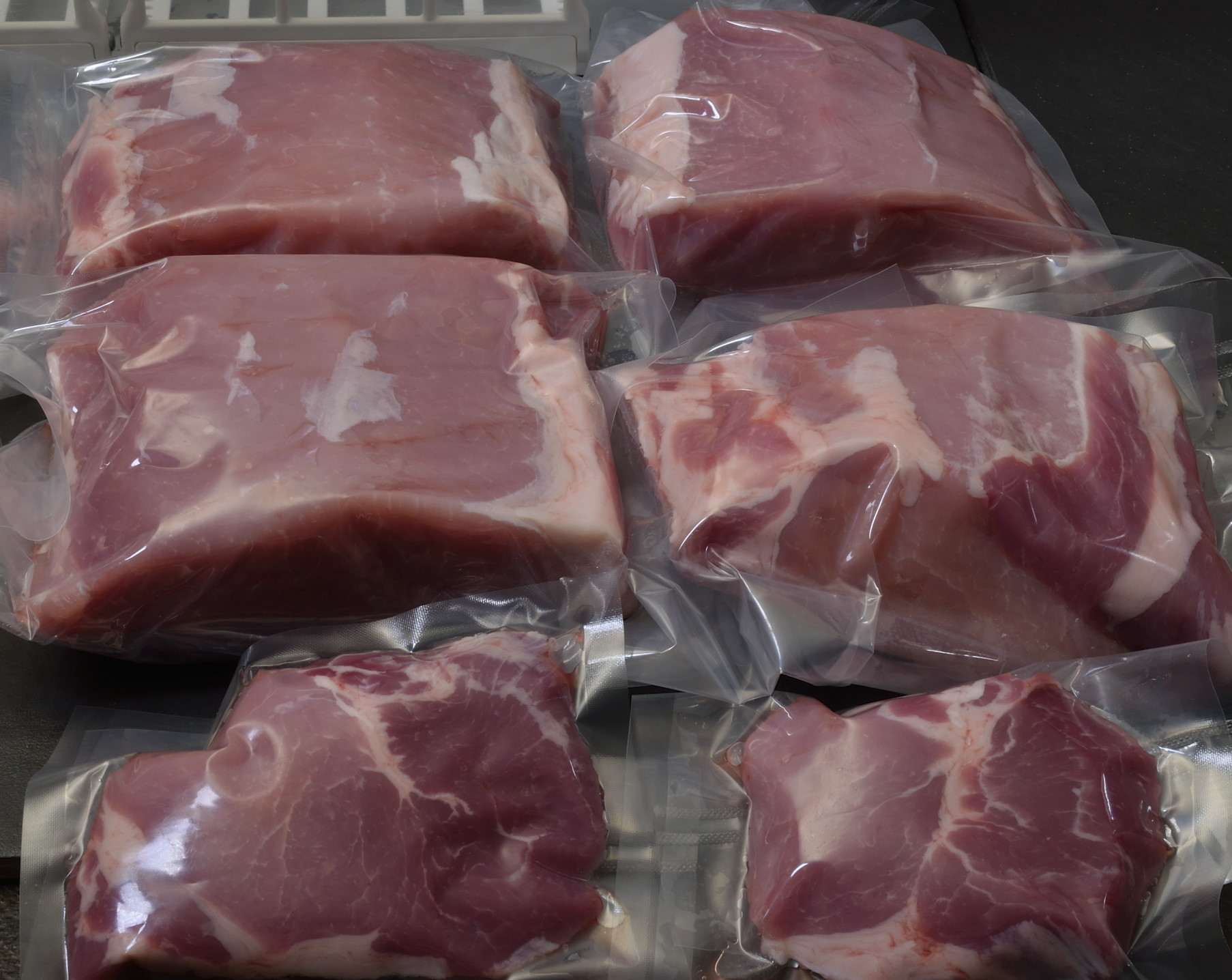 You can use all the medallions at once or you can prepare just one piece at a time. Sealed packages of processed proteins like pork and chicken are pasteurized, so as long as they stay sealed, they will have an extended refrigerator shelf life–at least two weeks if handled properly. Once the packaging is opened, one should use the product within four days. 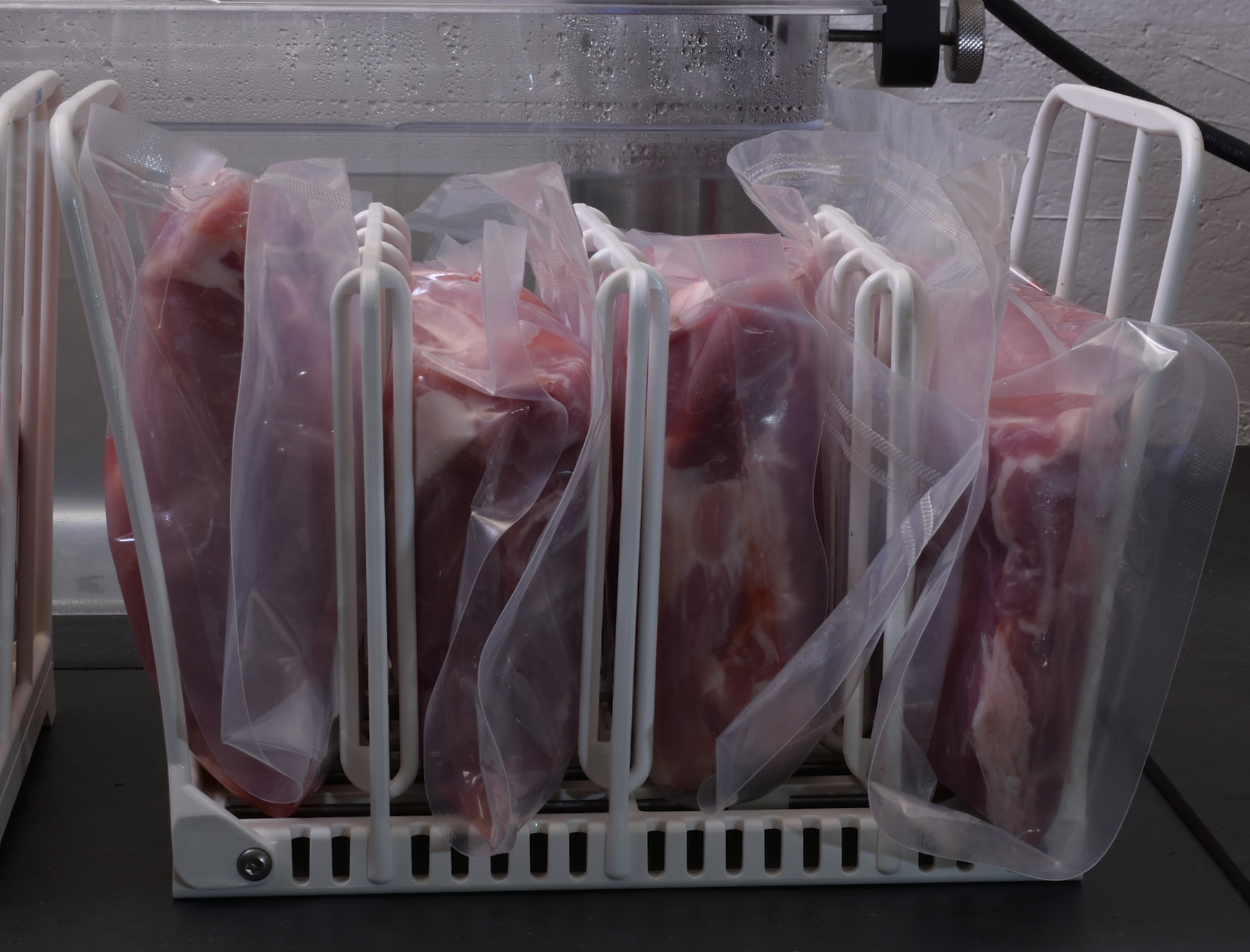 The entire batch was loaded into the new weighted Lipavi flexible racks. The medallions and roasts were processed at

After three hours, remove the pasteurized medallions. Shock in iced water until they achieve 70 F/21 C and then refrigerate to 40 F/4 C. This shocking procedure should always be practiced to avoid exposing the refrigerator and its contents to excessive amounts of the radiant heat emitted by the sous vide processed foods. Refrigerators and even freezers are not designed to nor capable of safely chilling hot foods in an acceptable amount of time.

The roast is processed for another three hours to achieve pasteurization–a total of six hours. It is then shocked cold and refrigerated in the same manner as the cutlets.

I cannot overemphasize the importance of the rapid chilling process. This applies not only to sous vide processed proteins, but to any foods that are above 90 F/32 C. Even if there were no risk of bacterial contamination, food can still spoil if it spends more than four hours TOTAL between 40 F/4 C and 125 F/52 C–combined, on the way up, and on the way down again. One must keep this in mind when one is considering how to retherm processed foods. Between those temperatures, the danger zone/food safety clock never stops running. 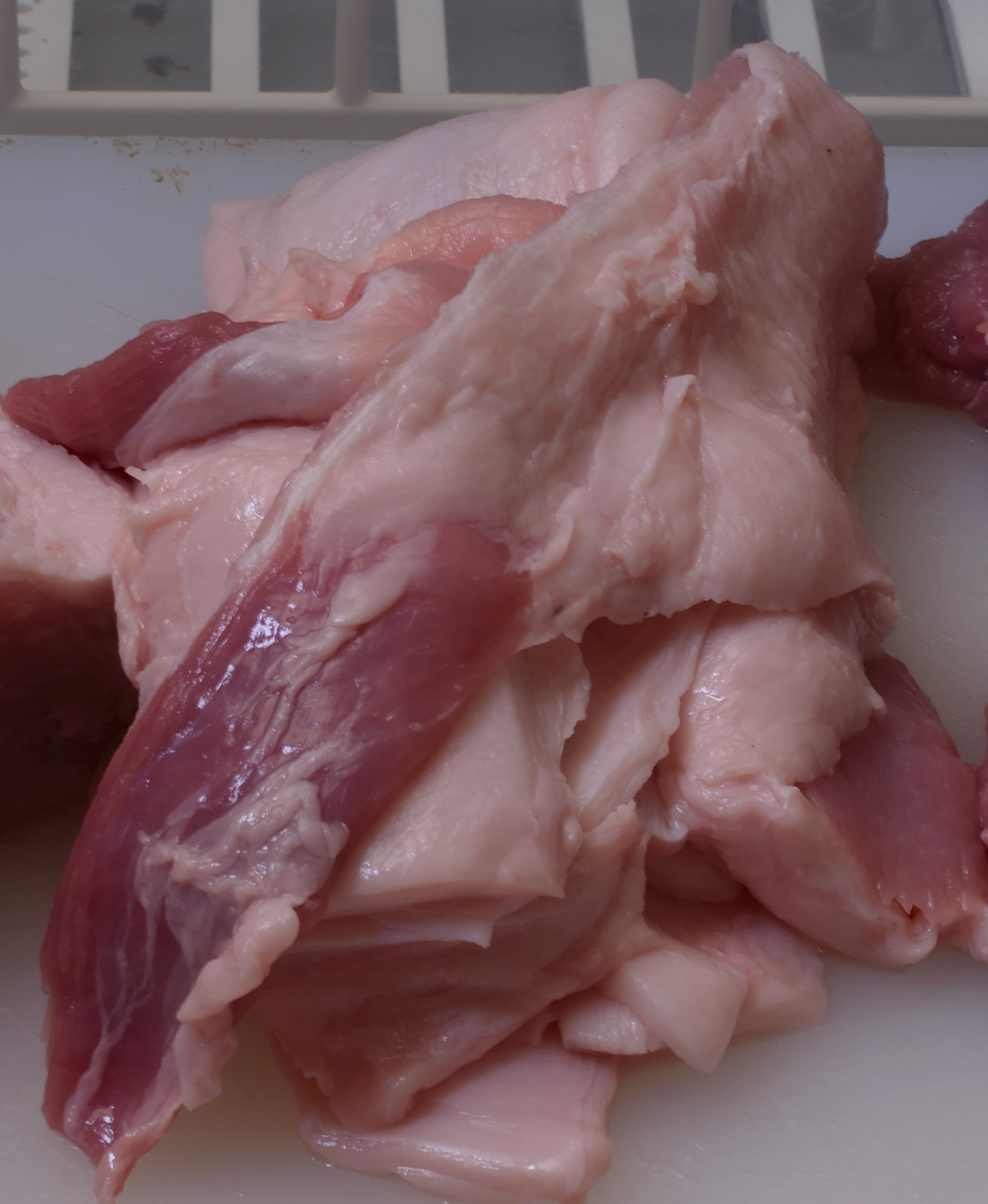 I removed about 1 lb/450 g of the fatty sinew that runs along the top of the loin. This should not be discarded–it can be used to make an excellent sauce, Simply brown the trimmings in a pan and then proceed to the recipe linked HERE.

The money we save buying bulk is frequently nullified when the food spoils before we get around to finishing it. Most people don't want to eat one cut of meat for more than a couple of days at a time. We serve it once, carefully wrap the rest, freeze it and promptly forget all about it.

We come across the unrecognizable glacial chunk of freezer burned pork months later when we try to find room in the freezer for the pork loin that we just bought. Sound familiar? The preservation benefits of sous vide can minimize this occurrence.

Portioned, processed and sealed in the package, the pasteurized pork not only freezes well, it can be safely refrigerated much longer than if it were raw.