Dark Side Barbecue Sauce as needed.

Based solely on its appearance in the butcher’s case, eye of round looks almost like a filet/tenderloin waiting to be cut into steaks. As we mentioned in a recent article about New Yorks and rib eyes, selecting cuts of meat strictly on a narrow basis of appearance is a recipe for disappointment. The eye of round can put any method of cooking to the test. For a more detailed discussion of this sub-primal cut of meat, visit HERE.

Eye of round “roasts” are usually 2 lb/1 Kg or larger–the entire eye of round muscle weighs between 7-8 lbs/4-5 Kg. The surface tissue is quite tough and usually comprises about 20% of total weight. For this recipe, we are going to use the trim to make a concentrated brown beef stock. If your roast is already well trimmed, you can skip over the process of caramelizing the trim and proceed to the caramelization of the vegetables as explained. In this case, you may decide to fortify the stock later with any of the prefabricated beef bouillon products available on the spice shelves at the market.

We acquired the entire sub-primal for purposes of the demonstration. Because of the unique characteristics of sous vide, the procedure is the same regardless of the size or number of the pieces within this weight and volume range. This recipe can be uniformly applied to any eye of round roast between 2 lb/1 Kg and 7 lb/3.5 Kg without changing the time or temperature parameters.

Heat a large skillet to 225 F/107 C. Add 1 oz/30 ml of vegetable oil per lb/450 g of meat–enough to coat the bottom of the pan. Add the roast and the trim to the pan. Gradually increase the heat as needed to accommodate the bulk of the roast–keep the pan “sizzling.” Hissing sounds mean the pan is too cool–popping sounds mean the pan is too hot. If your roast is too large for the stove top, you can use a high sided roasting pan in a conventional oven set to 400 F/200 C.

After browning the roast(s), remove them from the pan and seal in bags with 1 teaspoon salt per lb/450 grams of meat. Stage into the sous vide bath at

Use the pinch and poke method to evaluate texture/tenderness.

Add the roughly cut carrots and celery to the trim that remains in the pan. Brown for thirty minutes. Keep in mind that stirring excessively cools the pan and impedes the caramelization process.

Onions have higher levels of simple sugar and brown faster–add them after the celery and carrots are brown. Continue sizzling for thirty minutes.

Once all the components are well caramelized, add the tomato paste and stir to coat. Add the wine.

Cook the wine dry and add the 2 qt/2 liters water or unseasoned stock.

Simmer for at least

Strain the stock through a colander into a vessel to remove the larger pieces. Rinse out the skillet. Pass the stock through a moistened paper towel or coffee filter back into the pan–moistening the filter fabric prevents the flavorful stock from clinging to it instead of passing through to the vessel below. You should end up with no more than 1 quart/1 liter of stock–if necessary, continue to slowly reduce after straining. Allow the stock to cool to 90 F/32 C before refrigerating to 40 F/4 C. The fat will form a raft on the top of the stock. Use a spoon to remove the raft and discard. Keep refrigerated until day of service.

After processing, the eye of round can be served “right out of the bag” as a roast. Sliced thin or thick, it will be tender regardless.

Ultimately, because of its low moisture content, this cut is even better when utilized for various other applications. Upon completion of the sous vide process, shock the packaged roast(s) in iced water until 70 F/21 C is achieved. Refrigerate to 40 F/4 C until day of service. The eye of round is now pasteurized and preserved. In the sealed packaging, it can be safely refrigerated for at least two weeks. This means you can make last minute decisions about which dish to prepare and be ready to serve within minutes instead of hours.

This variation on old fashioned pot roast is a suitable application for eye of round. Separating the tenderization/preservation from the pan-to-plate assembly enables the practitioner to reduce day of service meal finalization from hours to minutes. Plan in advance to serve with rice, noodles, or with sous vide Mashed Potatoes.

Dip the packaged roast into hot tap water for five minutes to melt the gel. Drain the liquid from the bag, clarify according to this procedure and set aside for the moment. Slice the green onions and mushrooms as per the list of ingredients.

Cut 2 thick slices from the chilled roast, about 2.5 oz/75 g. each. Dredge lightly in flour and shake off the excess. Heat a skillet to 250 F/121 C. Add 1 oz/30 ml vegetable oil and put the “steaks” in the pan. Fry until brown on the first side, no more than two minutes. Turn the steaks over, continue browning for thirty seconds, and remove to a plate. Add the scallions and mushrooms to the pan and saute until the mushrooms wilt. Turn off the heat. Add a few drops of vegetable oil and sprinkle 2 measured teaspoons of flour over the mixture–LESS than a tablespoon. Stir the flour into the vegetables and it will disappear.

Combine the clarified juices from the bag with enough of the brown stock to make 1 cup/225 ml. Return the burner to medium and add the liquid. The sauce will thicken almost immediately and then start to boil. Season with nor more than 1 teaspoon salt per cup/225 ml and pepper to taste. Add the peas and return just to a simmer–do not boil again or the peas will discolor.

Put the sour cream in a bowl large enough to eventually accommodate all of the other ingredients. Set aside.

Cut the beef into thin strips. Heat the skillet to 250 F/121 C, add a few drops of vegetable oil and the beef. Saute until brown and remove to a plate.

Add the scallions and mushrooms to the pan and saute until the mushrooms wilt. Turn off the heat. Add a few drops of vegetable oil and sprinkle 2 measured teaspoons of flour over the mixture–LESS than a tablespoon. Stir the flour into the vegetables and it will disappear.

Combine the clarified juices from the bag (if available) with enough of the brown stock to make 1 cup/225 ml. Return the burner to medium and add the liquid. The sauce will thicken almost immediately and then start to simmer. Add the garlic powder and season with salt and pepper to taste. Add half of this sauce to the sour cream and fold together–this will prevent dots in the sauce. Add the rest of the sauce, fold again and add the meat. Do not boil again. Cover and set aside or keep in a warming oven set to 145 F/62 C..

Cook the noodles as per the directions on the package. Drain and toss with a pat of butter. Place the noodles on a plate or dish and top with the Beef Stroganoff. Put an identifying dollop of sour cream on top and sprinkle with smoked paprika and, of course, chopped parsley.

This derivative of the classic beer garden sandwich uses ginger and cinnamon to spice up the original incarnation.

Combine 1 cup/225 ml of COLD beef stock with one ginger snap cookie. Bring to a boil and stir well or blend. Season with salt and pepper as needed. Keep warm. Butter the French roll and toast in a 250 F/121 C skillet until brown. Remove to a plate. Add half of the sauce to the pan and use it to coat and heat the sliced beef.

Arrange the sliced beef on the bun. Serve with the other half of the sauce on the side.

Philly Cheese Steak with Peppers and Onions (per serving).

This sandwich is most authentically represented in the City of Brotherly Love, but is served nationwide in one incarnation or another. Our West Coast interpretation uses cheddar cheese instead of the original liquefied American. The chopped parsley is my own colorful, personal, and optional touch.

Butter the French roll and toast in a 250 F/121 C skillet until brown. Remove to a plate. Increase the heat in the skillet to 375 F/176 C. Add a few drops of vegetable oil and then the onions and peppers. Increase the heat to the highest setting. Spread the vegetables out and let them sizzle and pop for thirty seconds. Drain on a paper towel. 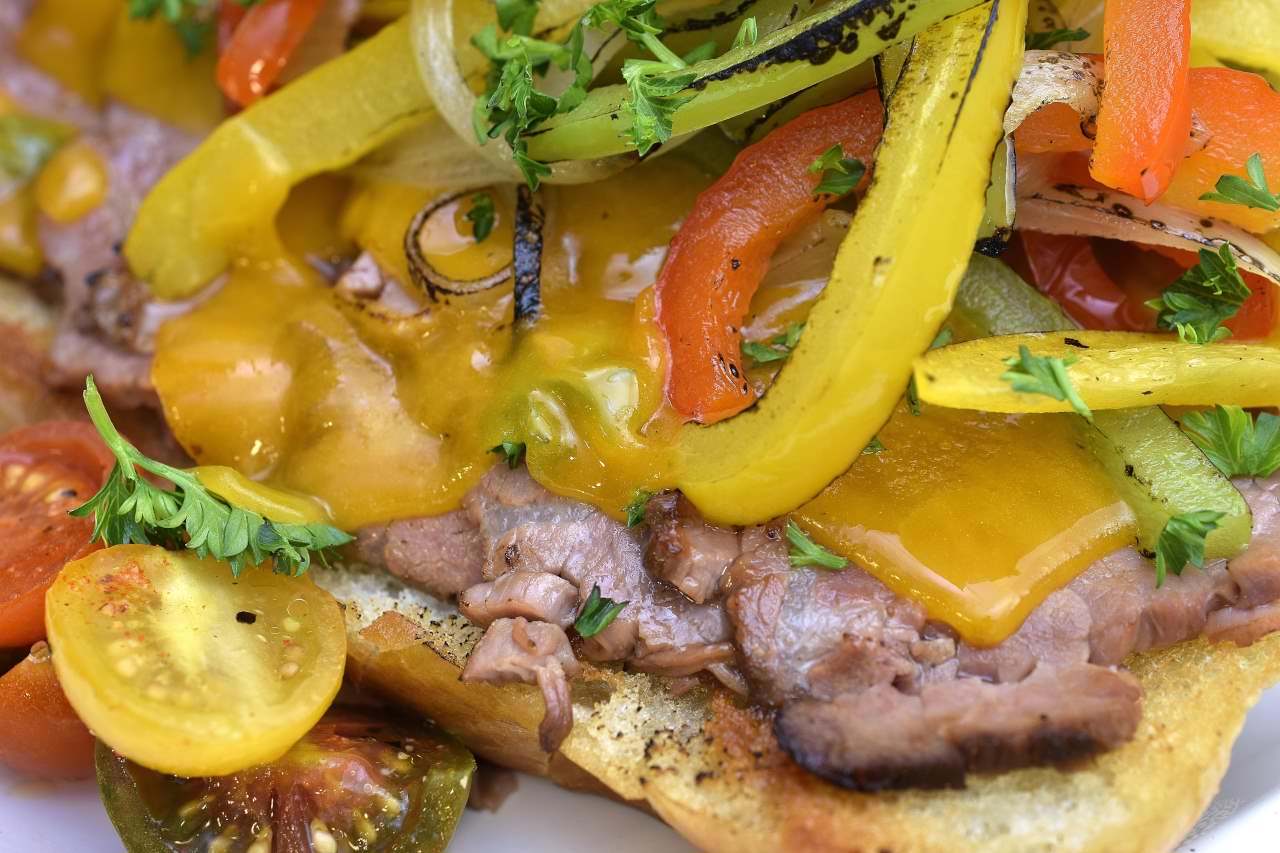 Add the sliced beef to the pan and spread it out. Turn off the heat–do not stir, just let it sizzle for a few seconds. Use a spatula to lift it out and arrange on the opened bun. Lay the cheese on top.

Arrange the peppers on top of the cheese. If you work quickly enough, the cheese will melt from the heat surrounding it–otherwise a few seconds in a hot oven or a touch up with a propane torch will do the trick. Fold it and cut it in half, if you dare–you will never see it like that in Philadelphia. 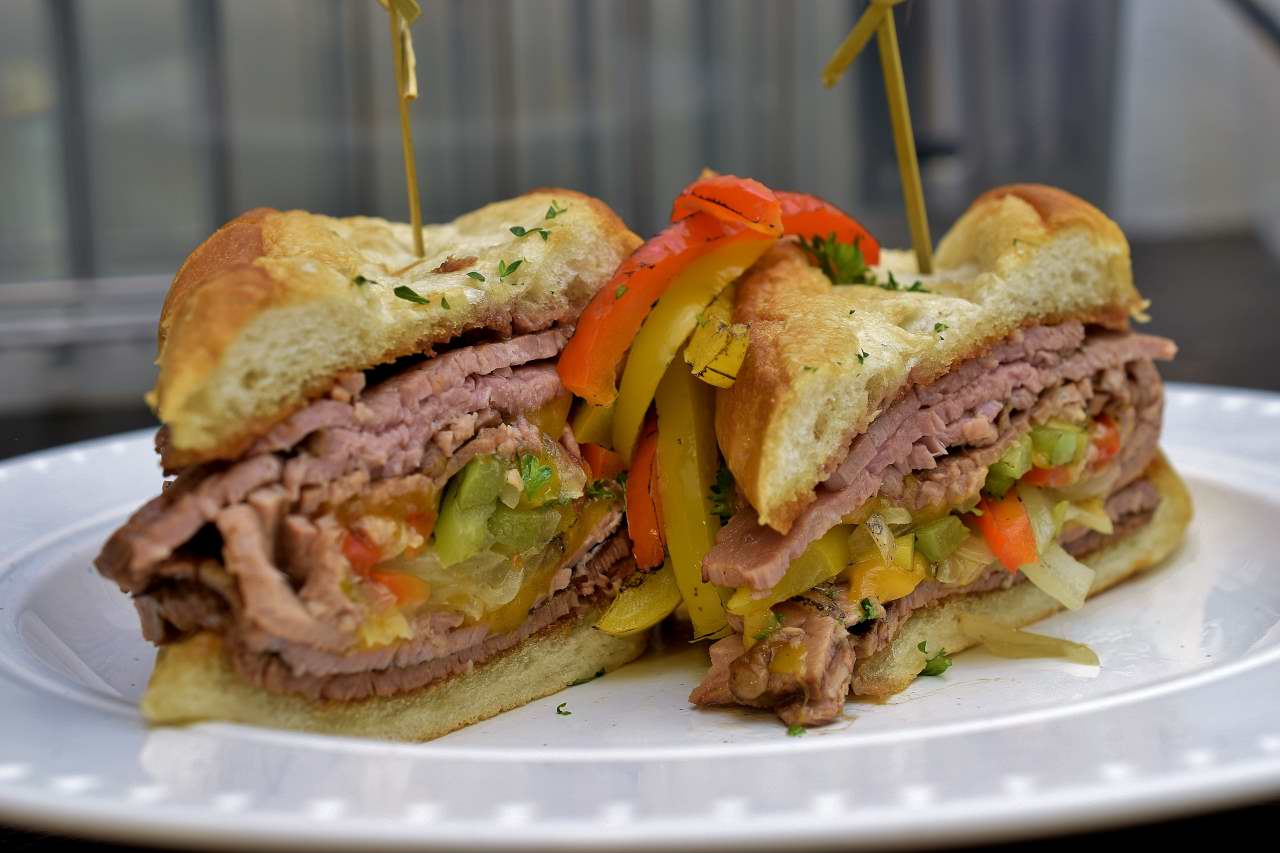 Shredded Eye of Round

Eye of round is perfect for any application that calls for “pulled” beef–tacos, nachos, sliders, you name it. Dip the package of meat in hot tap water for five minutes to dissolve the gel. Harvest the juices and process as described HERE. Set aside for another application. 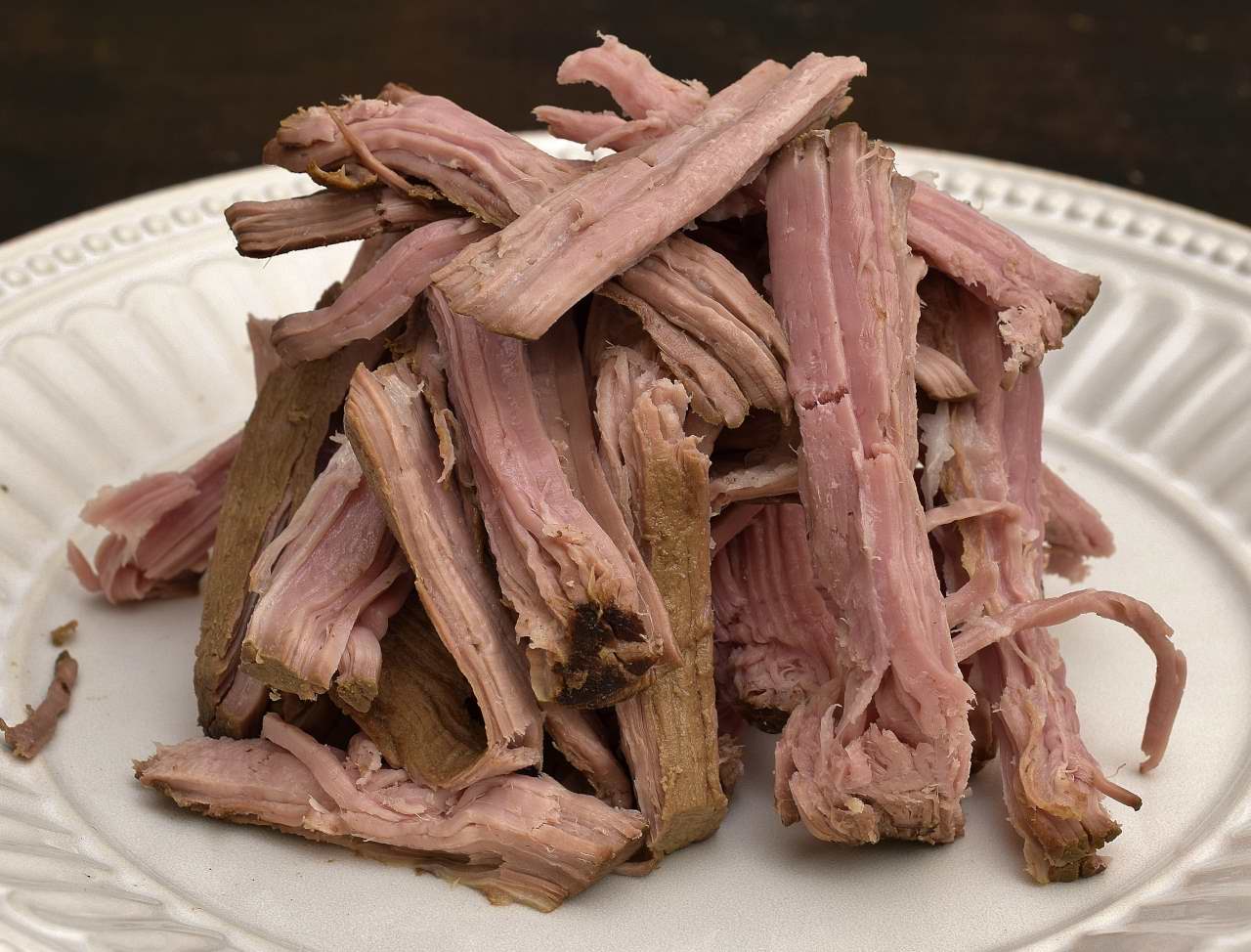 There are special implements to shred meat, but it can also be done with two forks, clean gloved hands, or using the paddle attachment of a Kitchenaid type mixer. In the picture above, we simply tore strings off of the cold roast. Be careful not to “overwork” the meat or it may crumble.

Heat in a pan (or microwave oven) with your favorite bbq sauce or our proprietary recipe, Dark Side BBQ Sauce.

Any bread or bun can be used. Slider buns are popular, but I occasionally use grilled sour dough slices. Serve with a well drained layer of coleslaw as outlined in the ingredients section. This sandwich goes great with Onion Rings

One of several benefits of this dish is that it can be prepared in its entirety in one pan–it will require rinsing one time.

Preheat the oven to 145 F-170 F. Most ovens have a warming function to accomplish this. If not, preheat to the lowest setting.

Heat the skillet to 350 F/175 C. Add a few drops of oil and the shredded beef. Stir only to coat and then add the peppers, onions and mushrooms. Stir lightly, again, only to coat. Add the oregano and the fennel, stir once, add the tomato paste, and stir until the paste coats the meat and vegetables. Add the water/stock and the olives. Bring to a steady boil and add 1 teaspoon salt. Add half the chopped parsley and stage the sauce into a bowl. Keep warm in the oven.

Rinse out the skillet and bring 2 quarts/2 liters water to an actual boil. Cook the spaghetti as per the directions on the package and drain in the colander. Return the pasta to the skillet and add the butter and the sauce. Toss lightly and stage onto a plate or into a bowl. Sprinkle with chopped parsley. It’s as simple as that.

Sous vide processing makes many tough cuts' tenderness mimic much more expensive steaks and roasts. Eye of round's almost total absence of and moisture and marble makes it especially challenging for any means of cooking.

For these reasons, and despite its low cost, eye of round is almost never seen on restaurant menus or even at barbecue festival venues. Without attempting to supplant or duplicate prime rib or roast sirloin, this cut can be implemented in the creation of numerous desirable and festive effects.