Big box stores proved that people will butcher their own meat in order to take advantage of reduced pricing. Here's a way to avoid waste.

There is debate as to the exact definition of “rare,” “medium rare,” “à point,” etc. A little practice will help you learn just exactly what temperature corresponds to your preferred appearance of doneness. Here are some basic temperature setting guidelines:

Set the sous vide bath to the temperature that most closely matches your preference. Stage each filet into a its own vacuum bag. Seal and sous vide process at that temperature for a minimum of two hours. Beef tenderloins may be processed using the same parameters that are used for New York steaks and rib eyes.

As per your convenience, steaks can stay in the bath for at least two additional hours without risking any detectable difference in texture, quality or safety. Because of the precise characteristics of sous vide, and if service is delayed for one reason or another, filets and/ or steaks can stay in the bath up to eight hours. There is no “moment” before which the cut is tough or under-cooked, or after which the cut falls apart. Eventually, the pink color of a rare steak will dissipate if it is left in the bath for an extended period of time. If you want to process several steaks to different degrees of apparent doneness, visit HERE.

Note: For enthusiasts who like their steaks extremely rare, they can be processed at temperatures as low as 122F /50 C. In this case the processing time should be limited to two hours in order to meet USDA food safety standards. The steaks should then be seared and consumed within two hours, just as one would if sous vide were not being utilized.

Once you remove your filets from the bath, let them rest at room temperature for up to 15 minutes. This allows the surface to cool somewhat. Doing so prevents the searing process from elevating the internal temperature beyond the original target temperature. Then, you can season, sear and serve.

Once you have trimmed your beef tenderloin, here are some links to specific recipes on this site: 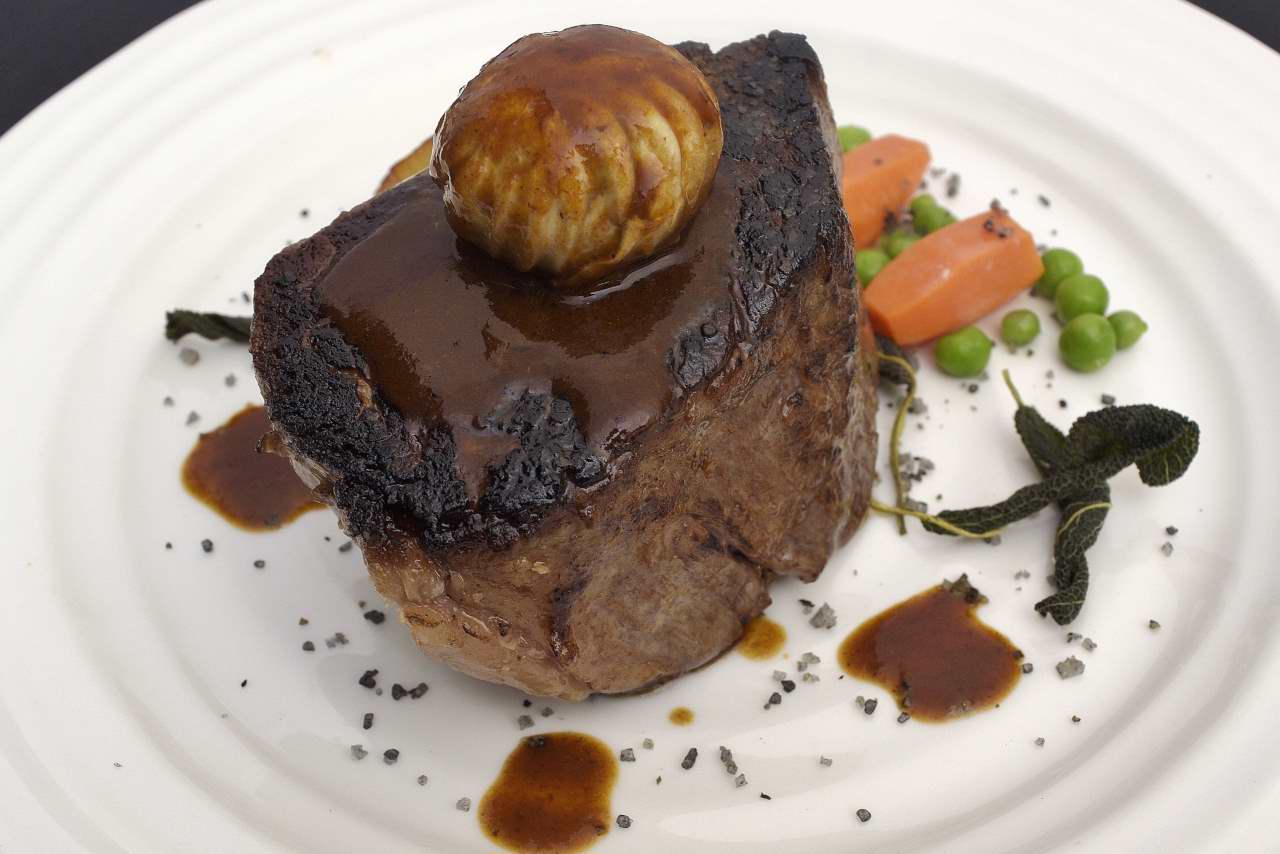 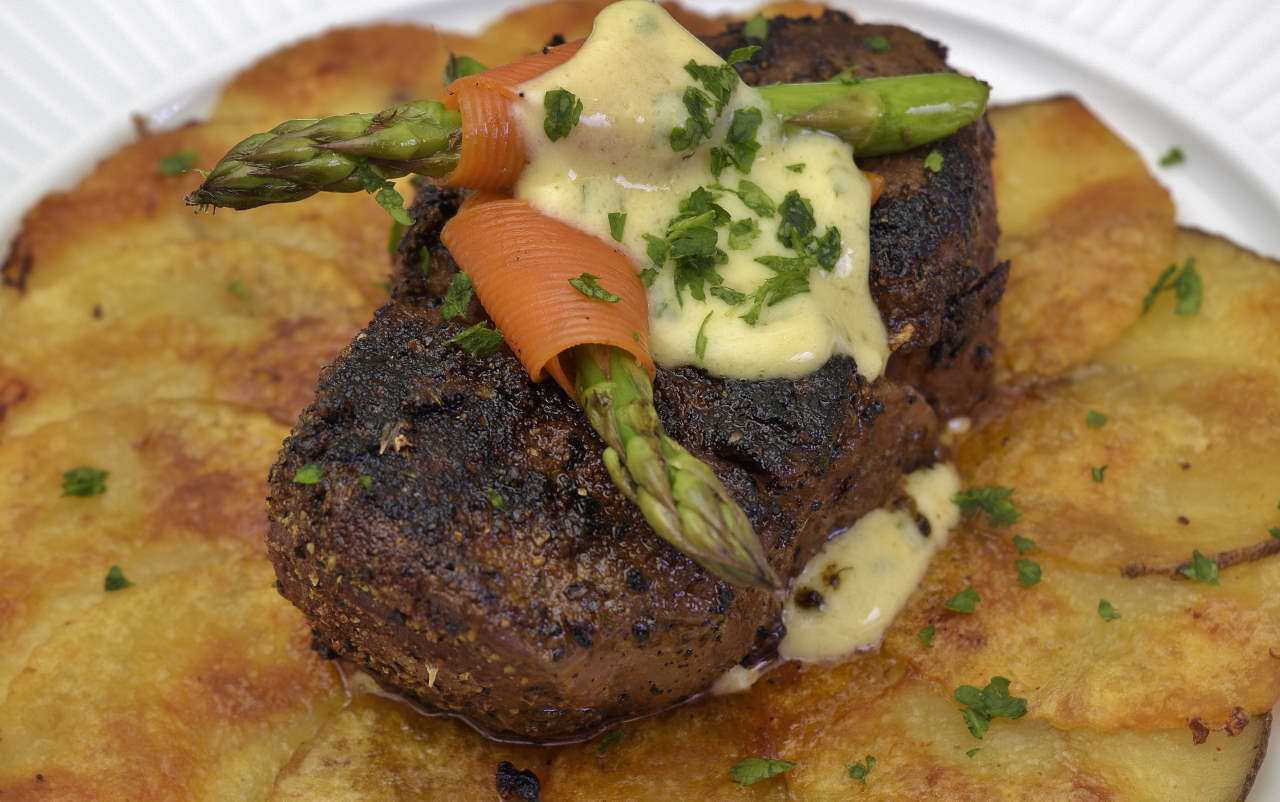 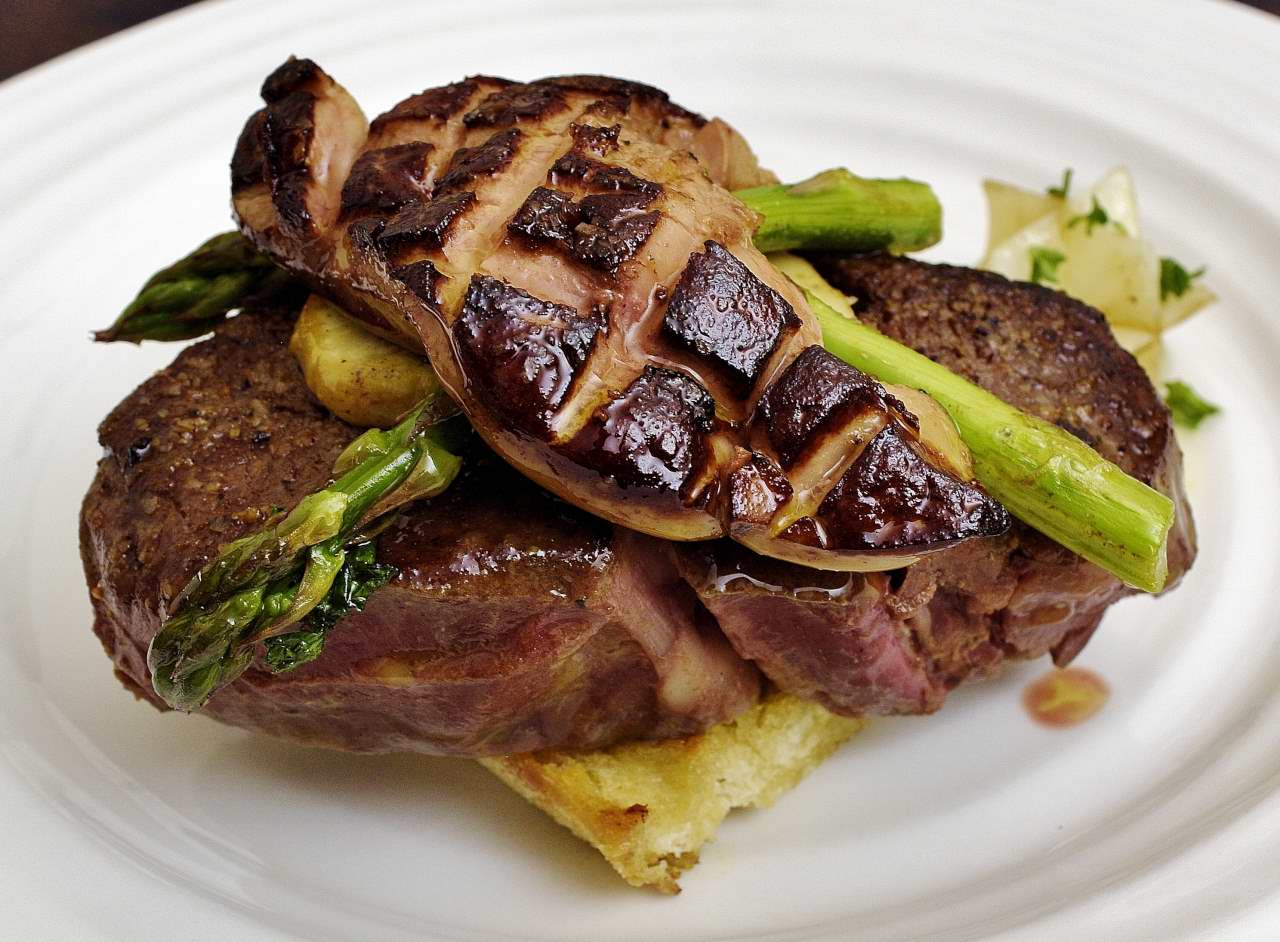 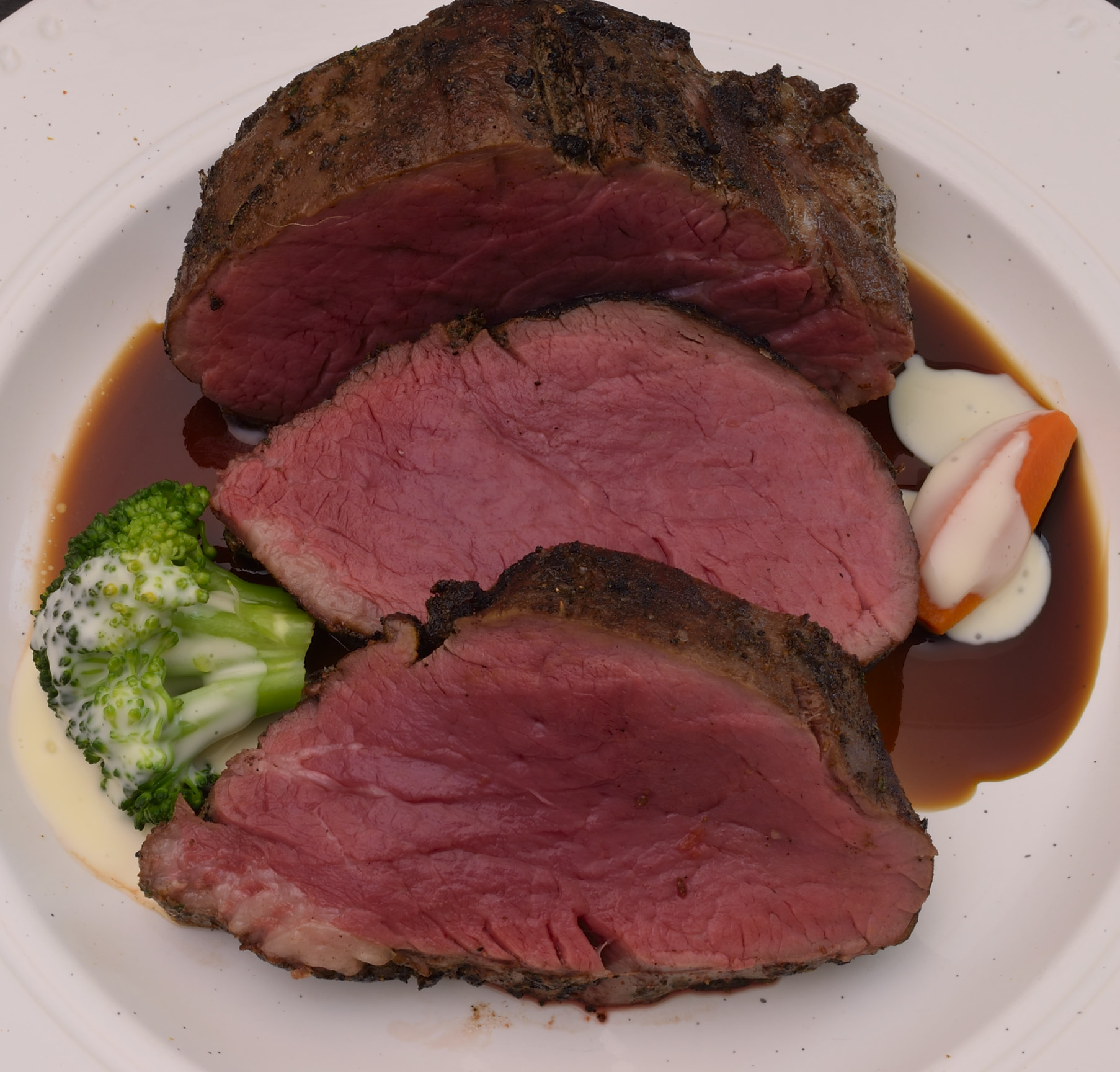 In the picture above, you see the entire denuded tenderloin. The larger “head” is on the right, the “tail” on the left. Ironically, the “head” is the end closest to the rear of the animal. The cuts used in our demonstrations come from particular sections of the beef tenderloin. The tenderloin is tender from end to end, but this treatise illustrates how to denude the tenderloin from start to finish–a process that will take no more than half an hour even for the most timid among us. There is really very little mystery to it!

Below, you see portioned steaks of various sizes. In general, the head and the heart are viewed as the most desirable cuts of the filet.

How to get there:

The picture above should look familiar to anyone who has visited the plethora of big box stores that dot the landscape these days. The label will usually say “Beef Tenderloin,” with the occasional “whole filet” or “whole tenderloin” attached to the sticker. Anatomically, it is referred to as the “psoas major” muscle–that’s right–humans have them too!

That’s not blood in the bag–by law, there can be no blood in slaughtered meat. If there was, the meat would spoil in a matter of hours. Those red juices are water mixed with myoglobin, an oxygen carrying protein that occurs in muscle tissues but does not course through veins or arteries. It is rich in iron–hence the color.

The slender strip in the foreground of the picture is generically referred to as the “chain.” It is plainly visible and is usually already pulling off a little at the tail end. Some butchers actually attempt to leave it attached to market packaged filets, but it is quite gristly and fatty. Chefs usually roast it to make sauces and forcemeat. It can even be used to make ground beef or Steak Tartar. We will remove it for now. You can almost remove it bare handed, but it is better to use a sharp boning knife to help it along so as not to damage the tenderloin itself. 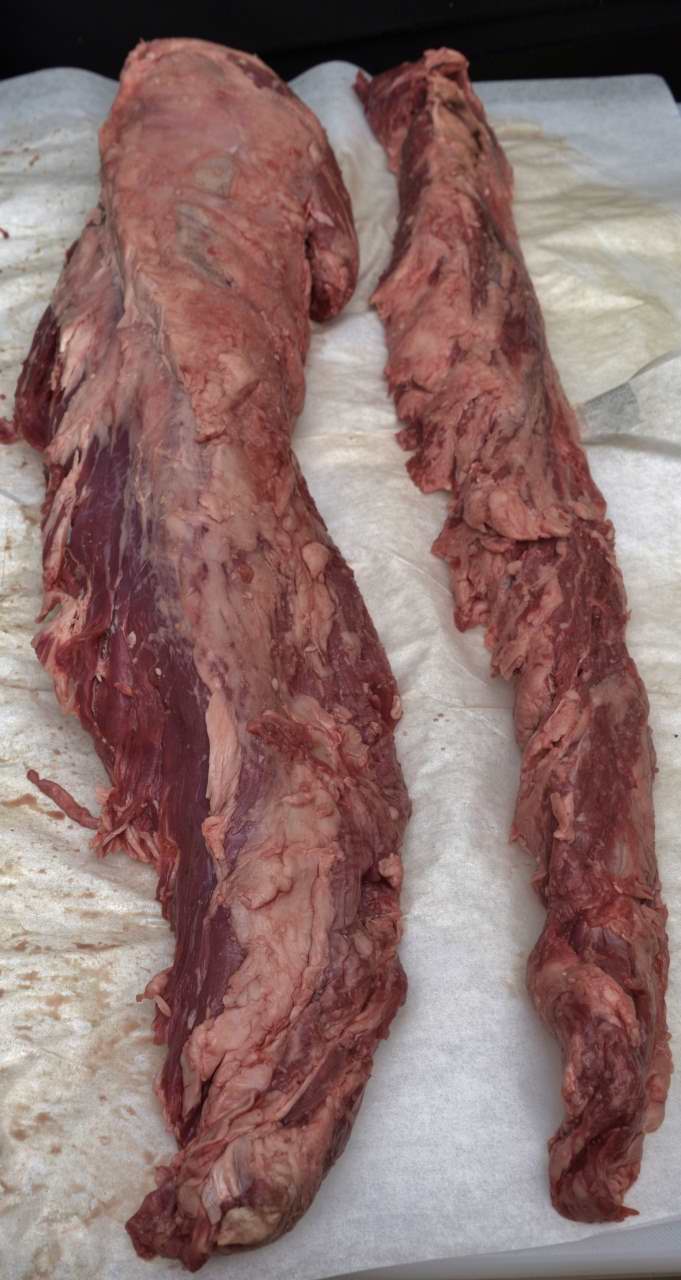 Just follow along the seam–the juncture is plainly visible. As you continue towards the head, the connection is a little firmer so use the butcher knife to finalize the separation. 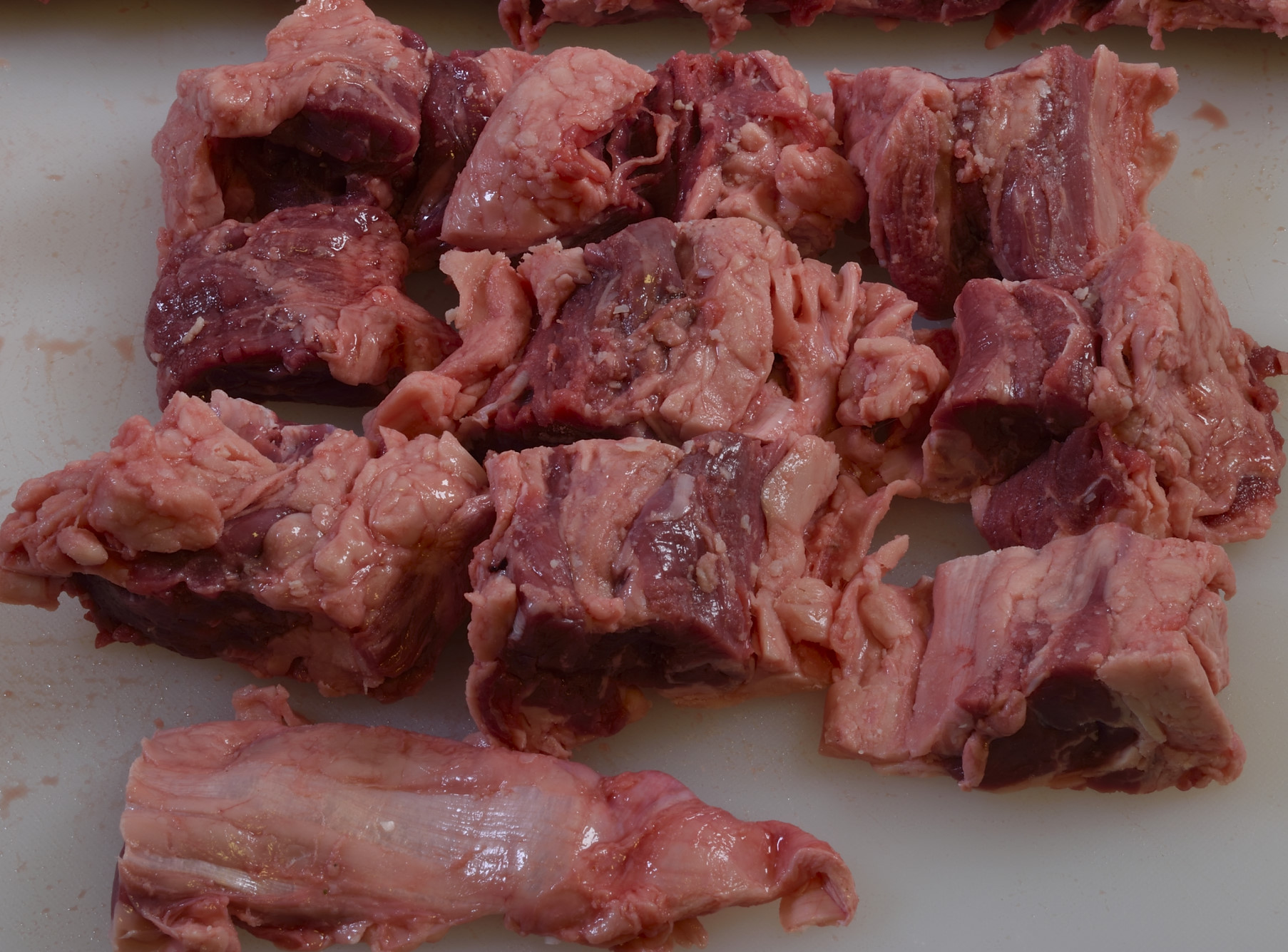 Anywhere from 25% to 33% of the total weight is trim, and the chain section is quite “meaty,” as I mentioned. That’s the cost of doing business. If you buy the tenderloins already denuded, you are still paying for the trim–you just don’t get it. This gives the market the opportunity to sell it “again” in some other form.

Now that the chain is removed and set aside, we can remove the remaining silver skin, gristle and excess fat. 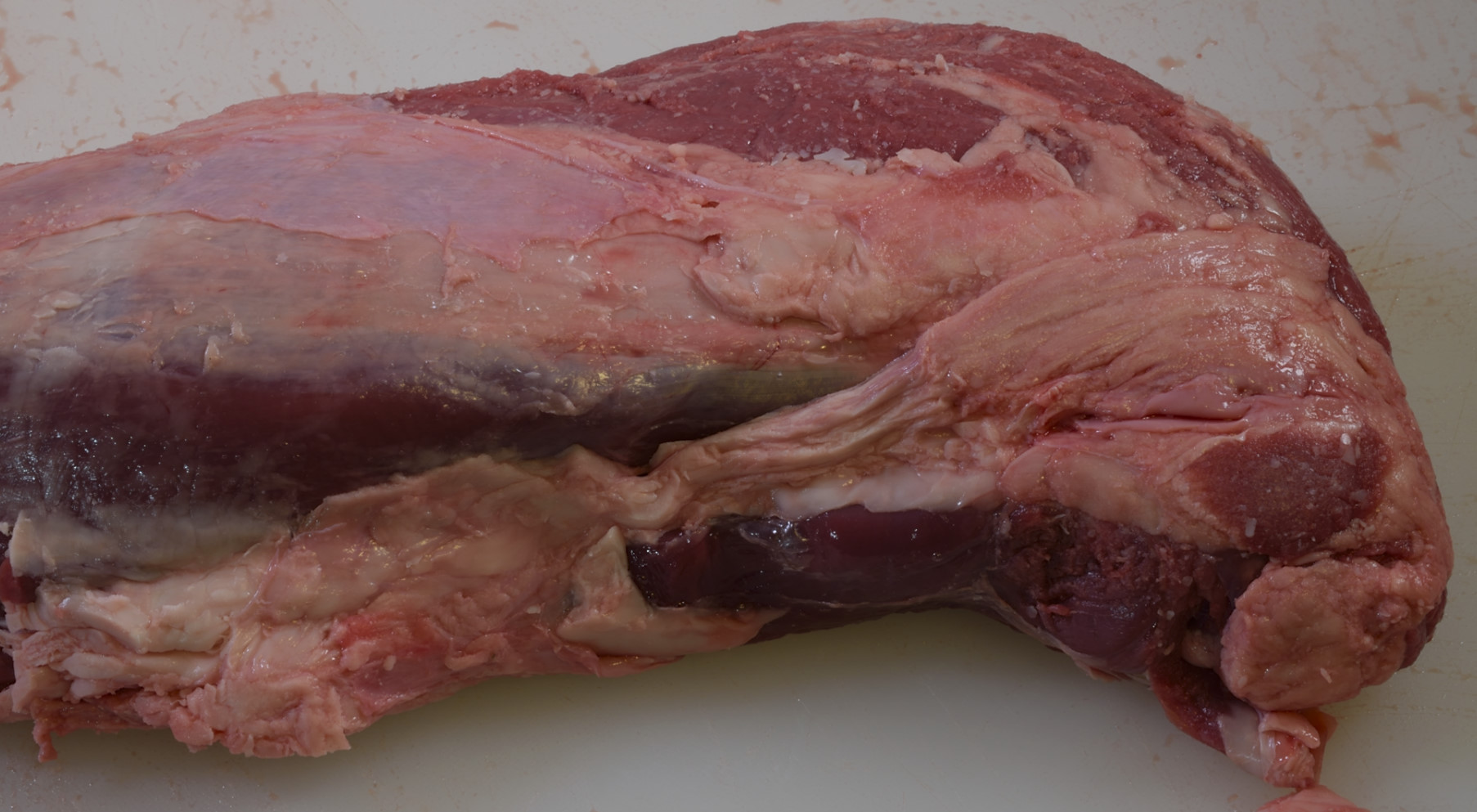 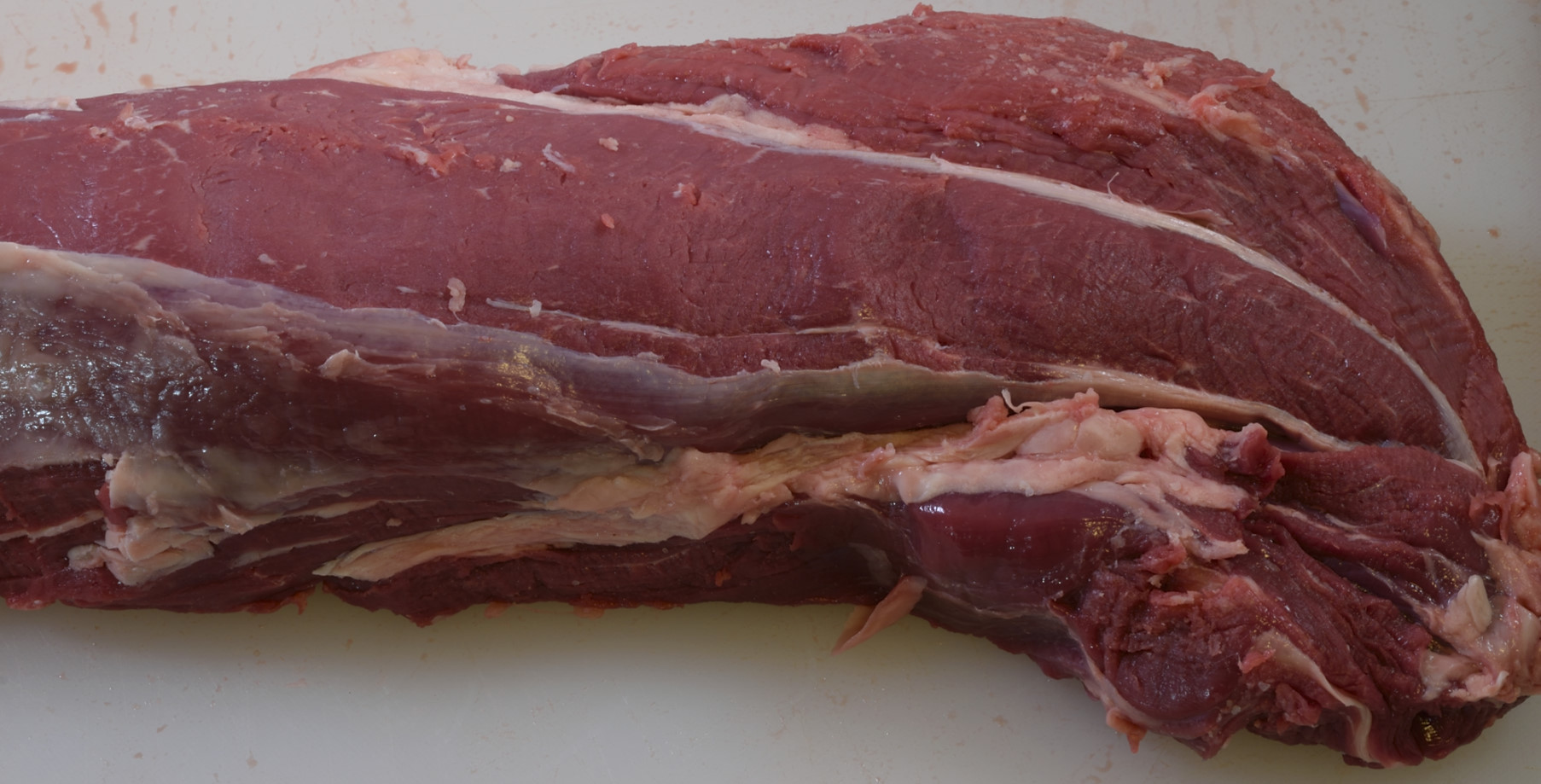 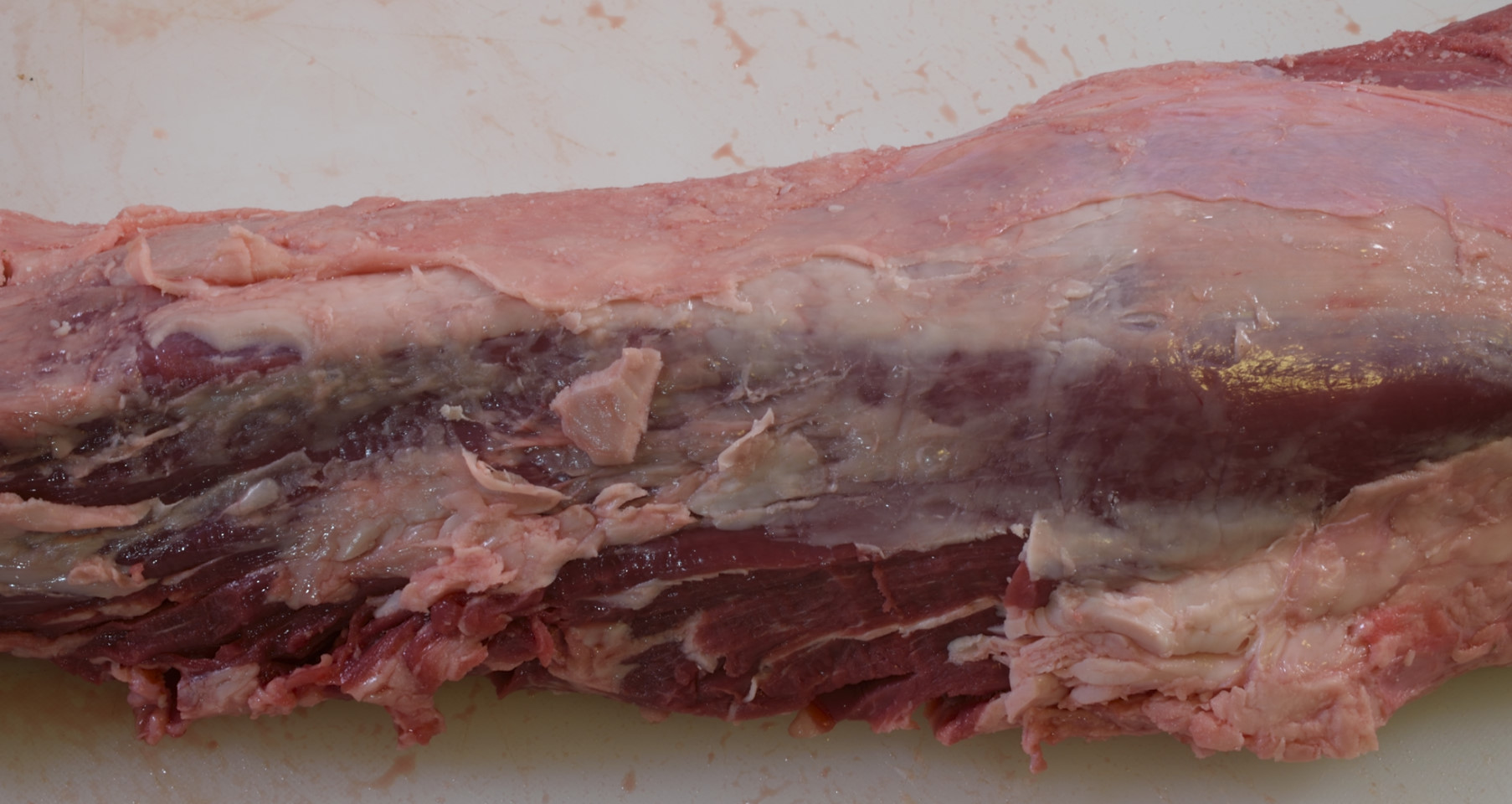 After. Now turn the tenderloin over to expose the “bone” side (below).

You can see the little furrows where the meat was attached to the bones.

Use the butcher knife to remove large fatty pieces, but again, not too much.

Consider that if you were eating a porterhouse or even a T-bone, this fat would still be attached at the intersection of bone and meat. Above: before. 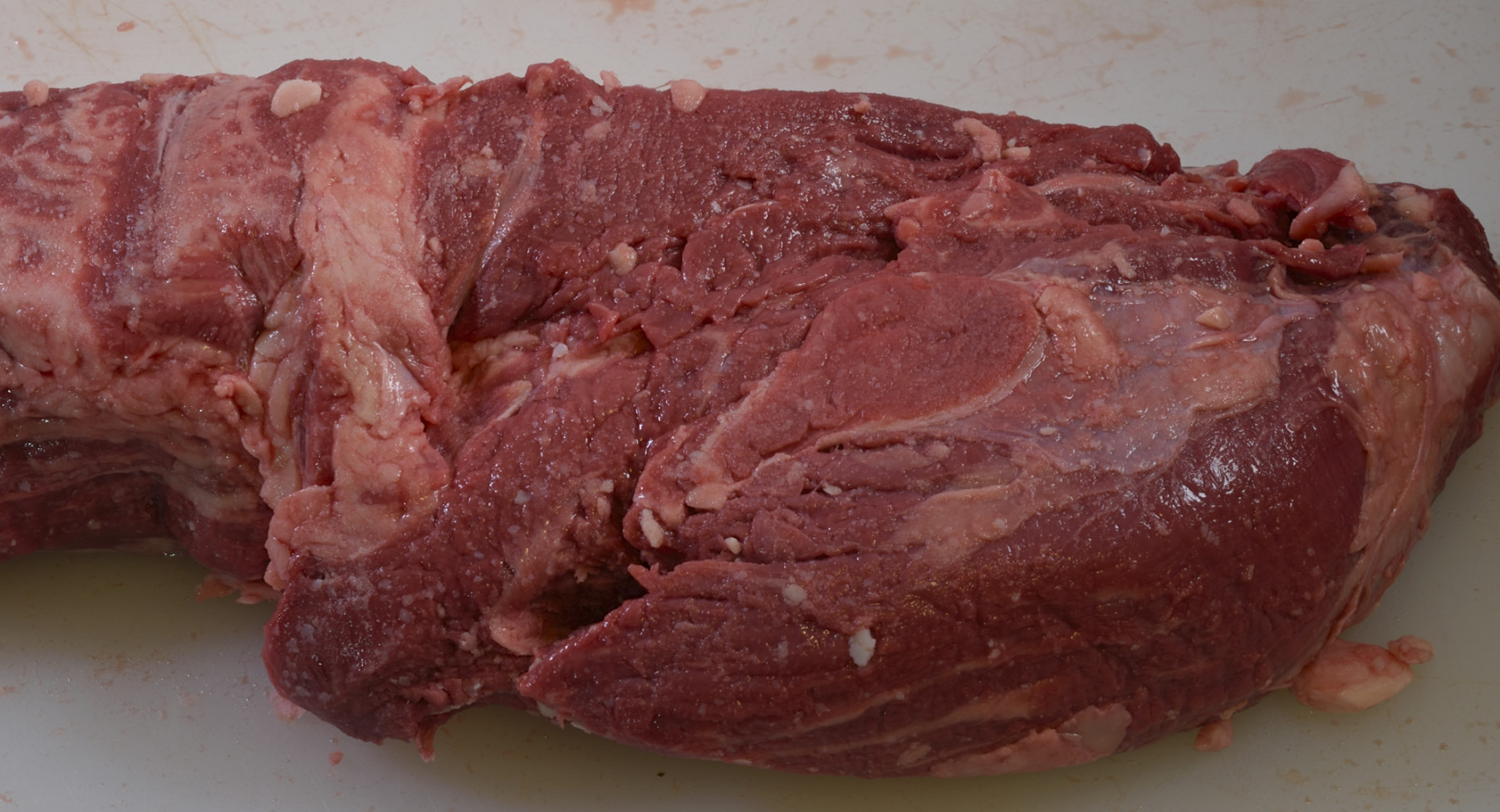 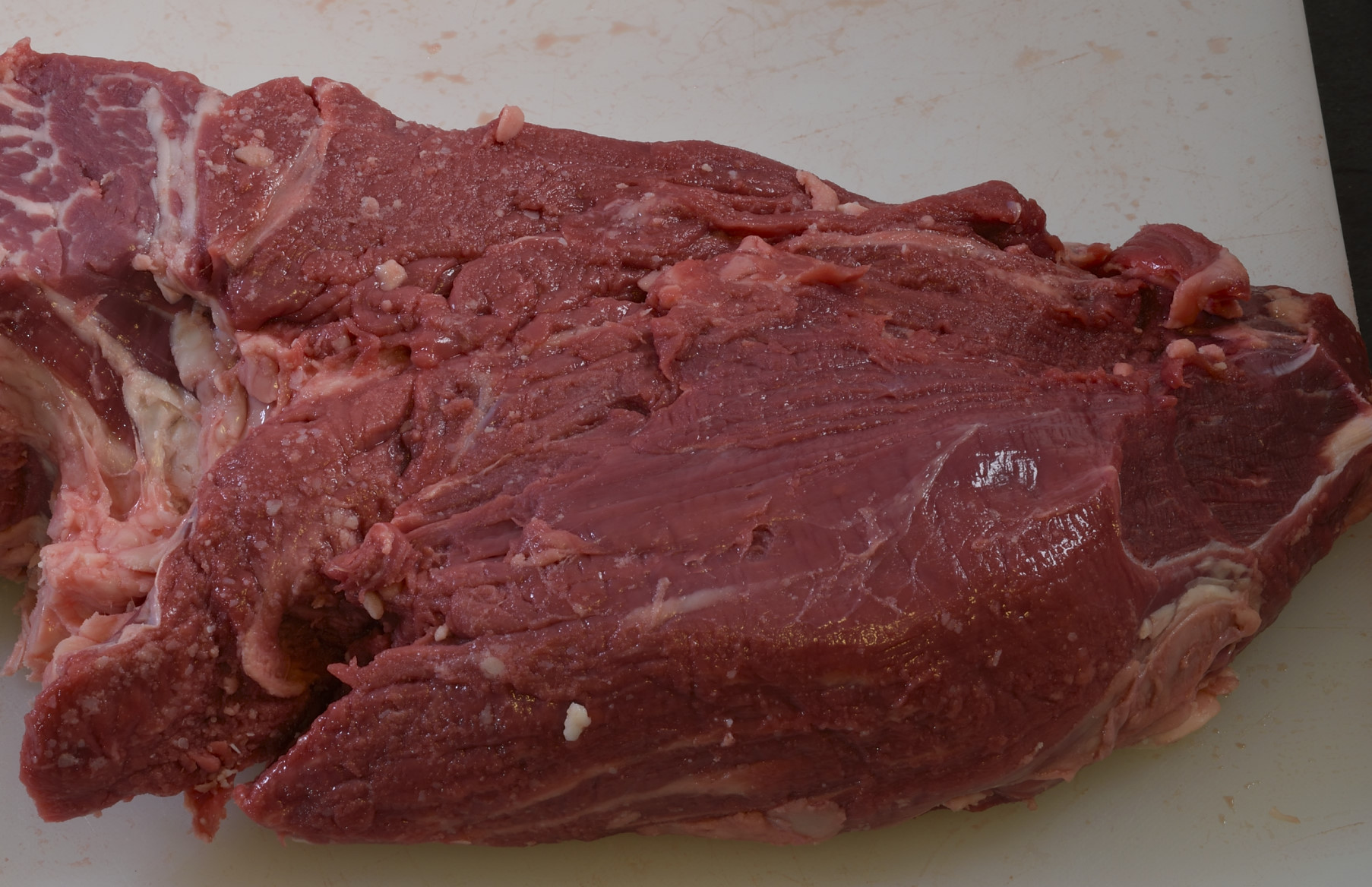 Now we are ready to cut steaks. We can remove any smaller pieces of fat that tend to “hide” as we go. Meanwhile… 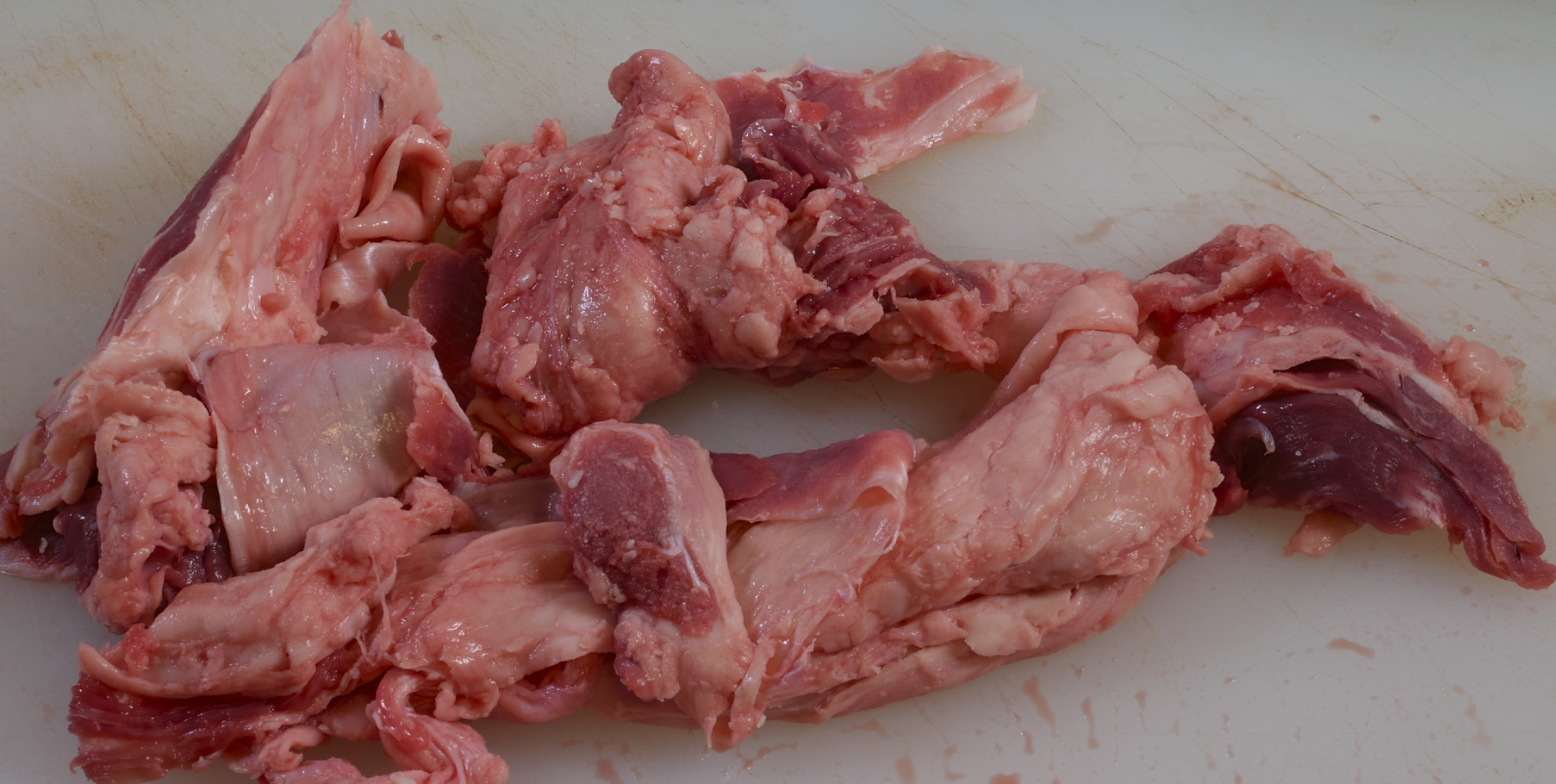 This trim gets combined with the chain that we reserved earlier.

Now it’s just a matter of portioning out filets. Above: three from the head end.

Weights can range from 3 oz/90 g and up to just using the whole thing as a roast. I cut them big and then divide them up at service, but there are no rules other than to do whatever you want.

Three from the heart.

And three from the tail end. 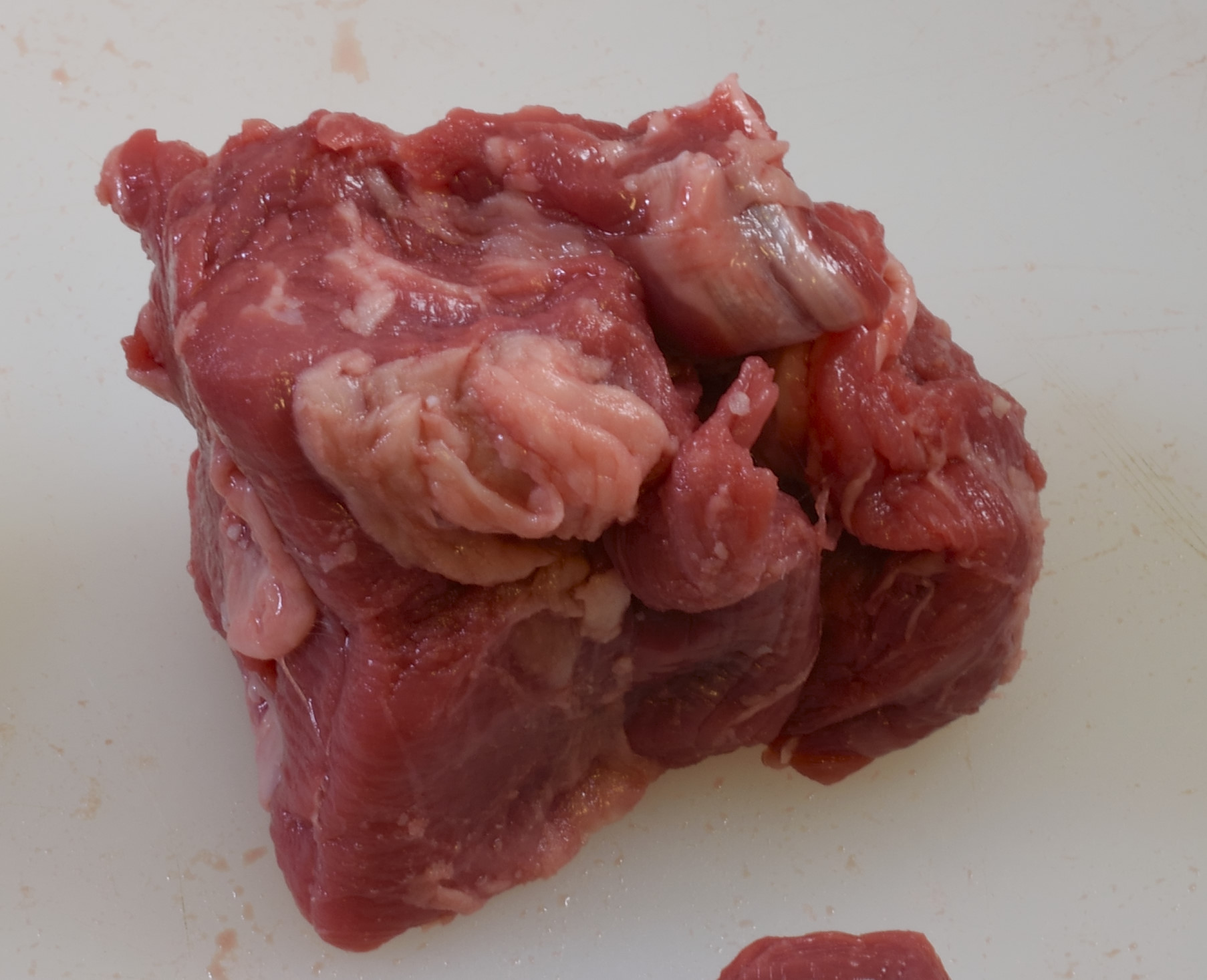 The very last piece is perfectly wholesome and delicious, but it is a little bit more difficult to present. This could be where the idea of wrapping steaks in bacon came from. In the old days, we cut this up for Stroganoff or brochettes.

Click HERE for how to use the trim to make Espagnole/Demi-glace.

Beef tenderloin is not the only primal cut that "wholesale to the public" merchants have come to offer. Butchers are loathe to admit that cutting meat is not as mysterious and difficult as we have been led to believe. The pricing of whole beef strip loins, rib-eyes and even pork loins, bellies and shoulders offer considerable savings to those interested in learning just what needs to be removed and what needs to be left on.

Sous vide integrates well with a little knowledge of meat cutting, especially because of it's preservation qualities. Pursuant to that, we are inclined to explain some basic principles that will avail our readers with the skills necessary to trim and cut steaks and chops