Sous Vide: How to process multiple steaks to different degrees of doneness in a single bath

Cooks struggle to cook more than one or two steaks at the same time--much less to different temperatures. Sous vide is here for you!

Here are some basic temperature setting guidelines for appearance of doneness:

It’s hard to believe that not everybody likes their steaks cooked the same way we do. They don’t like to be told that they should change, either! As it turns out, we have family members and/or friends who seem otherwise fairly normal, but whose preferences range all the way from very rare to very well done. Restaurant cooks must go crazy!

Sous vide teaches us that temperature is the primary determinant of the appearance of doneness for tender cuts. And we want to avoid staging steaks in and out and back into the bath as much as possible. When we are done, we want everything to come out of the tank at the same time for the sake of simplicity and our convenience.

We want to be able to season, sear and serve the steaks with the minimum amount of fuss. Of course, if you have more than one sous vide bath and several immersion circulators, this is not a problem. But what if you have only one sous vide bath and you want to serve several steaks at different degrees of doneness? This puzzle elevates the frustration and anxiety level for novices and professionals alike. There has to be a way! Thankfully, sous vide turns this mind boggling conundrum into an amazingly simple process that requires the commitment of time but almost no effort. “One need only wait.”

Same as it ever was

The first step in sous vide is almost always the same. Preheat your sous vide bath to the desired temperature (more on that in a moment). In this case, we fill the bath to 2/3 full–deep enough for a steak or two to be fully submerged, but not quite full because we are going to want to add more water later (more on that in a moment too!). Vacuum seal your steaks in heat rated bags. Mark them with a perma-pen so that we can keep track of the which steak is for who. I usually just put the person’s name on the bag, like they do at Starbucks!

The type of steak, the size of the steak and the number of steaks in the bath at one time does not affect the temperatures applied or the duration employed. Always make sure there is room between items for the water to circulate.

The Norwood Method (named after a colleague who was the first to figure it out) prescribes that you preheat your sous vide bath to the HIGHEST temperature you intend to use. Let’s say grandma or your pregnant spouse wants their steaks extra well done. By the way–there is no shame in well done. Most of the world’s population eats their beef well done if they are wealthy enough or fortunate enough to come upon it.

We are going to process several steaks at different degrees of apparent doneness sequentially without removing any of them from the bath. Here’s how it’s done!

Preheat your 2/3 full sous vide bath to 150+ F/65+ C as per the guidelines listed above. Stage grandma’s 5 oz/150 g petite filet into the sous vide bath, make sure it is fully submerged and set your timer for two hours. Each steak must be processed for a minimum of two hours in order to achieve the desired internal temperature. You can extend any interval longer if that is more convenient for you. If the steaks are frozen, add one half hour to each stage of the cycle.

End of round one

Some one else at the table is a little bit more adventurous in their tastes, but they still want their steak “medium well to well.” After the first allotted two hours (or more), lower the setting on your bath to 145 F/63 C, again, as per the guidelines listed above. Add enough ice/cold water to bring the temperature down to the updated setting, stage the next steak into the bath, and set the timer for two hours again, and so forth.

Continue updating the temperature every two hours or so over the course of the entire processing cycle. I confess, I like my steaks rare! 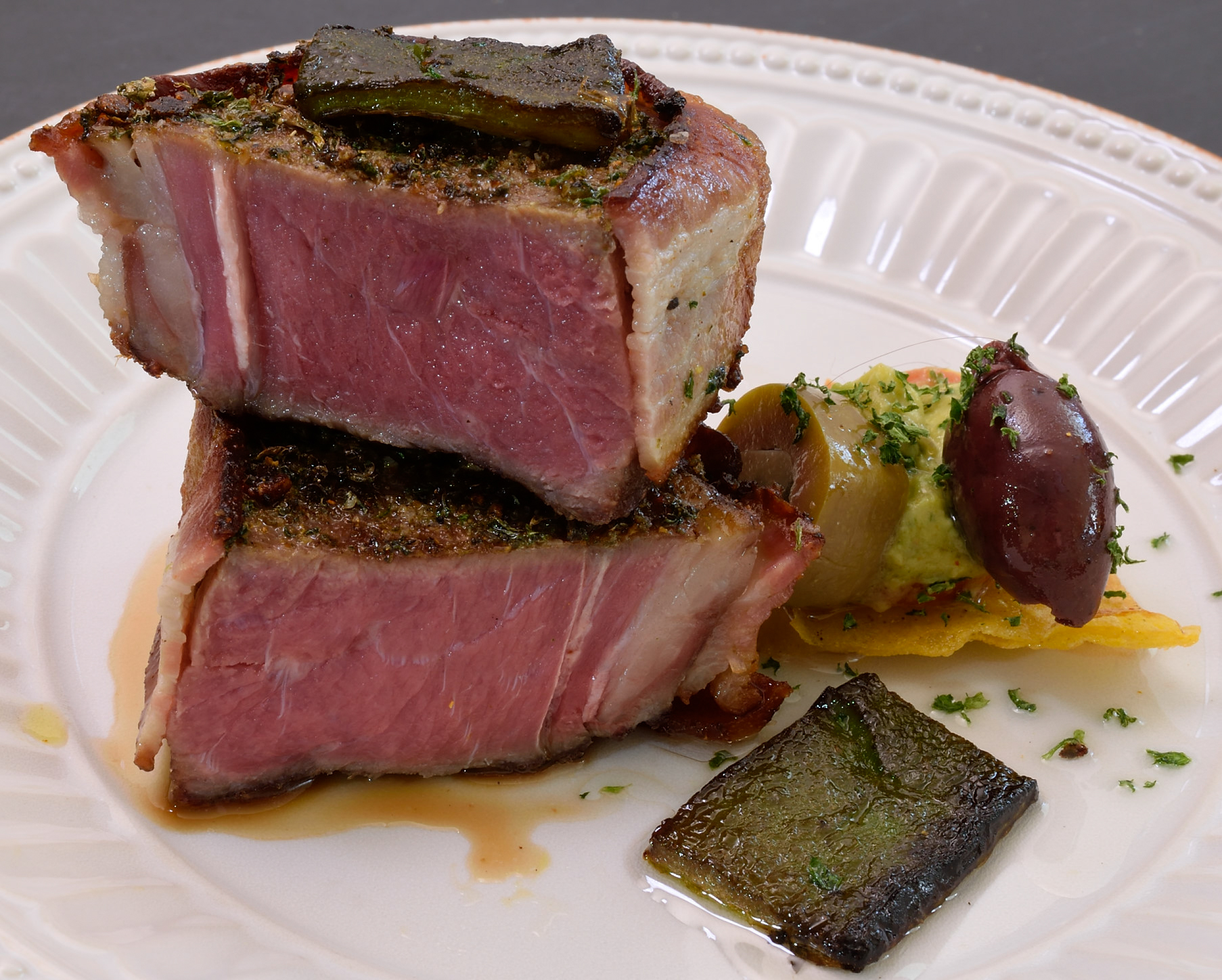 Eventually, you stage that double rib eye steak you picked out for yourself into the bath. By now, the temperature setting is 129 F/54 C, because you want your steak rare, rare, rare. Grandma’s petite filet and all the subsequent steaks can stay in the bath for the full duration without overcooking. There will be no detectable difference in that first steak, even if it stays in the tank as many as 8 more hours. 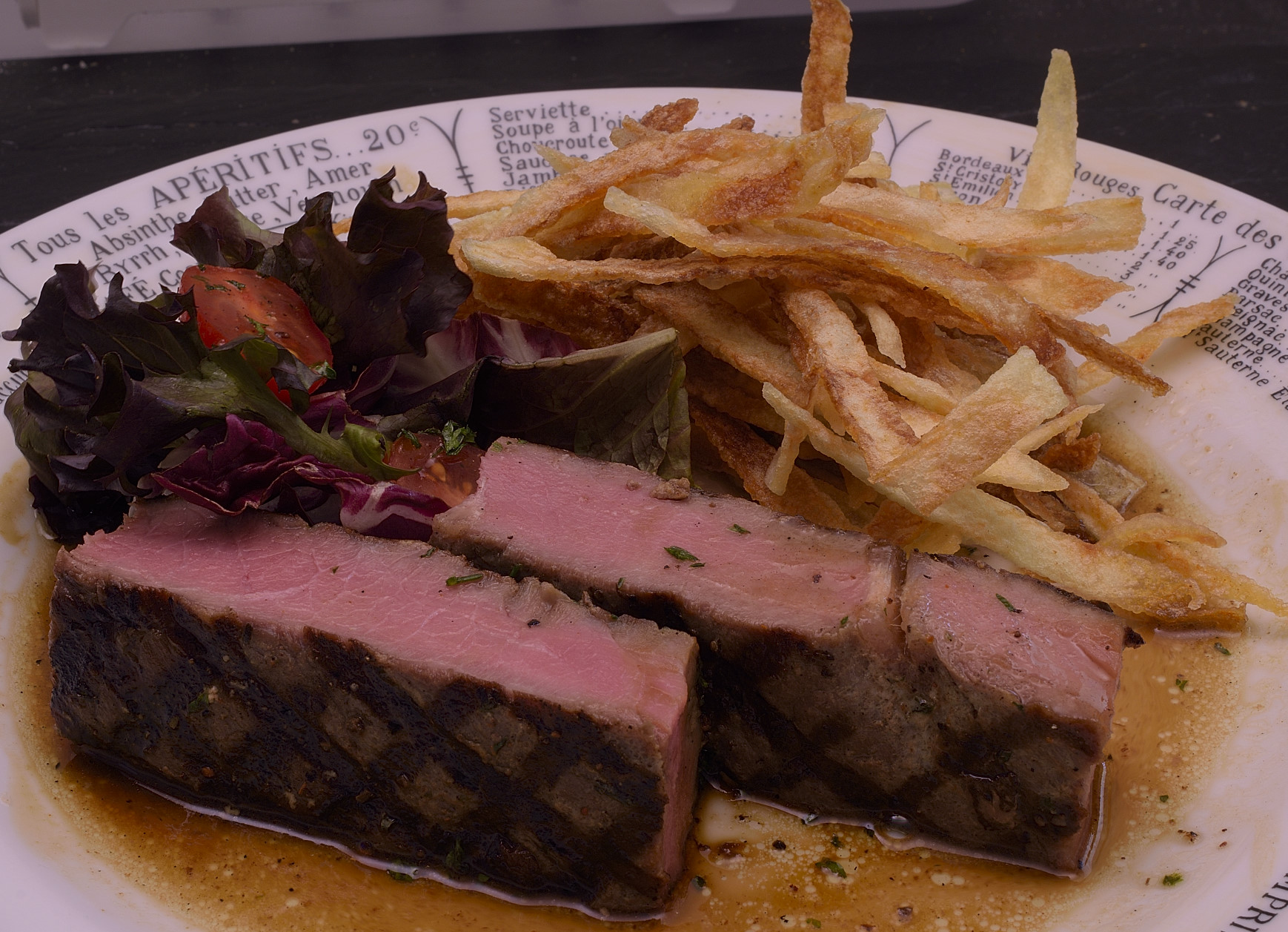 Sous vide temperatures are safe for extended periods of time, but they are low enough that a steak cannot actually overcook. When you are on the last step of the process, you may have seven or eight steaks in the bath simultaneously–which by now will be full to the brim. The Norwood method! 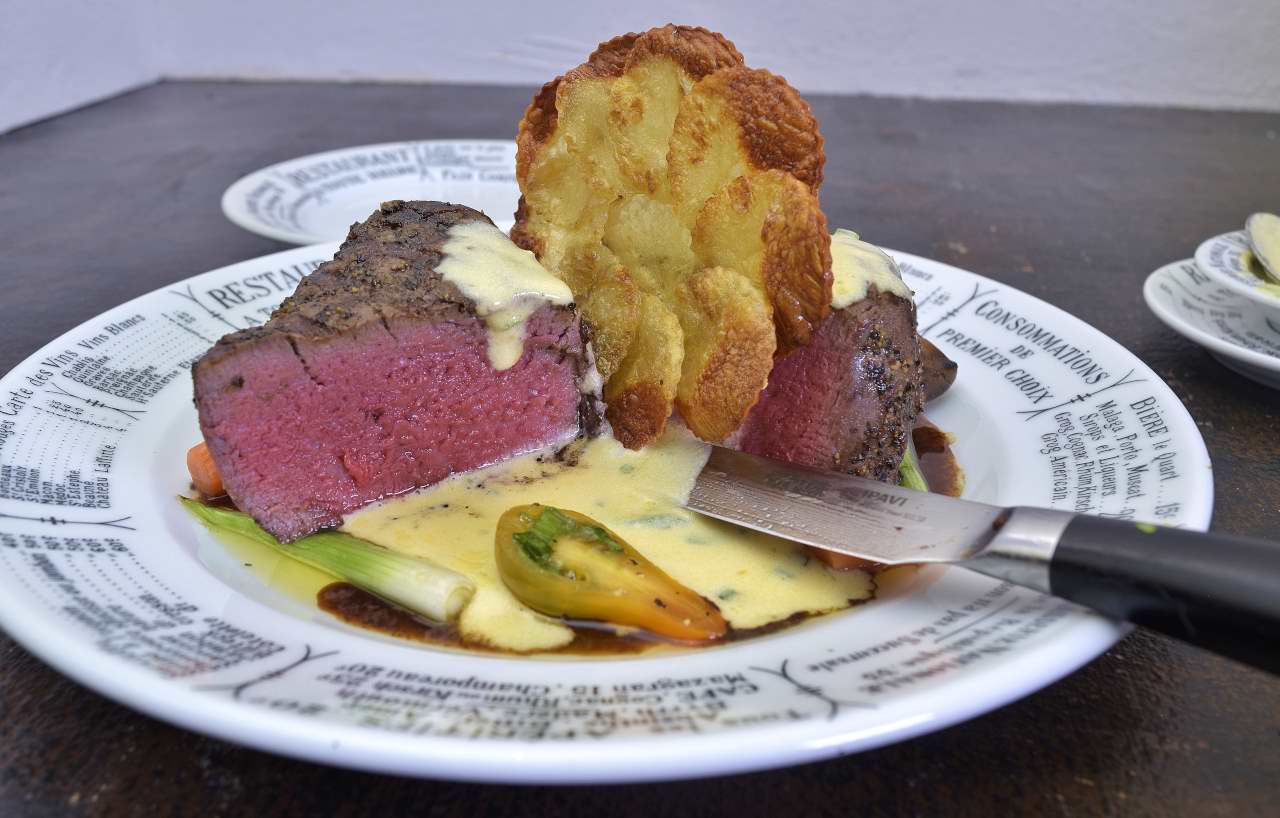 When you are ready to serve, turn your oven on the “warm” setting (most ovens have them now). Cut the corners off the bags and drain the juices. There is a way to process the juices, but for gatherings like this I usually just discard them out of convenience. Do not remove the steaks from the bags just yet. Heat your skillet to 350 F/176 C. Begin removing the steaks from the bag, seasoning and searing them starting with the most well done first. I usually do only one or two steaks at a time so as not to cool off or crowd the pan.

After searing, use the steak markers or colored frill picks to identify each steak. Put each steak on the sheet pan and put in the warming oven. This is why you do the most well done steaks first–a rare steak may overcook in a warming oven if it is in there for very long. Plate the steaks (or put them all on one platter), but leave the markers in them–this reassures people that special care was given each steak. Let them be the ones to remove them!

This method can be applied directly to the following recipes: 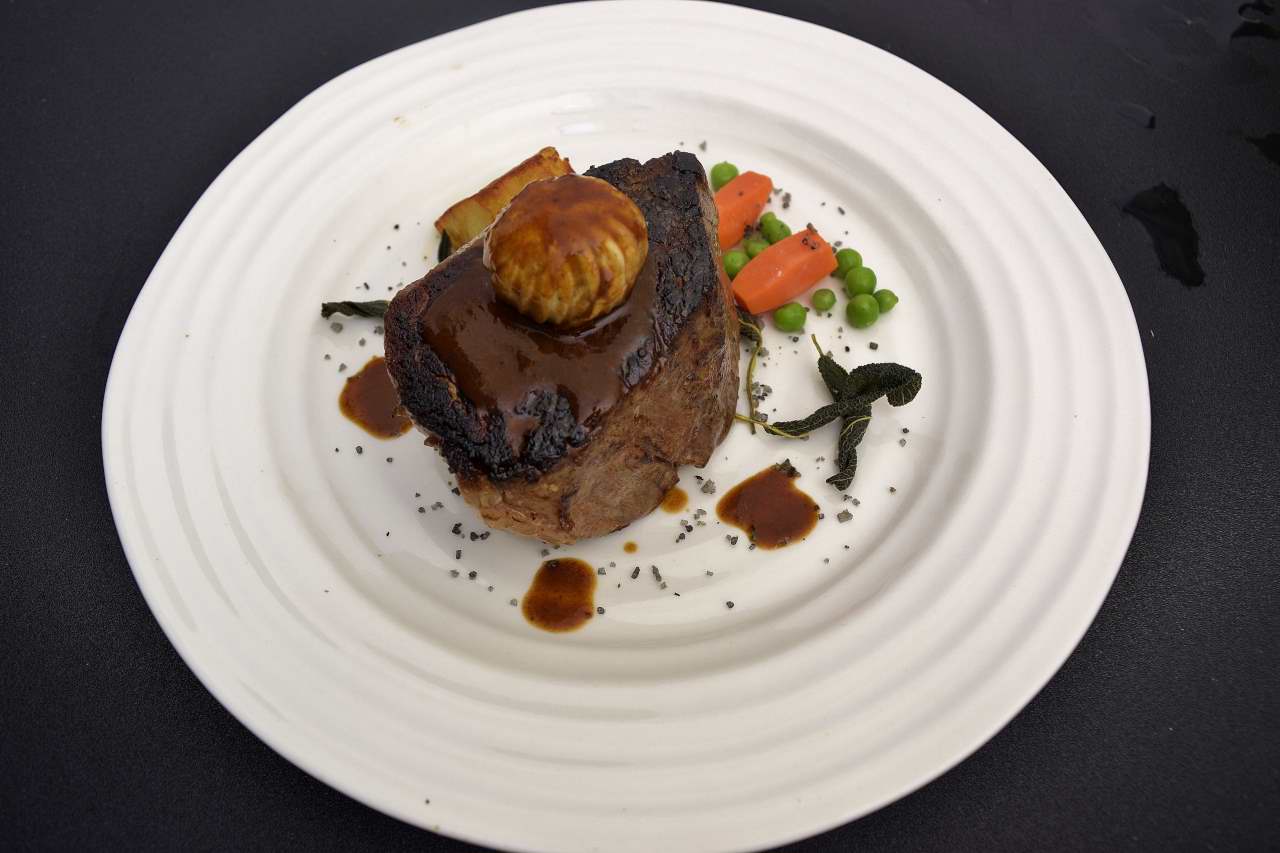 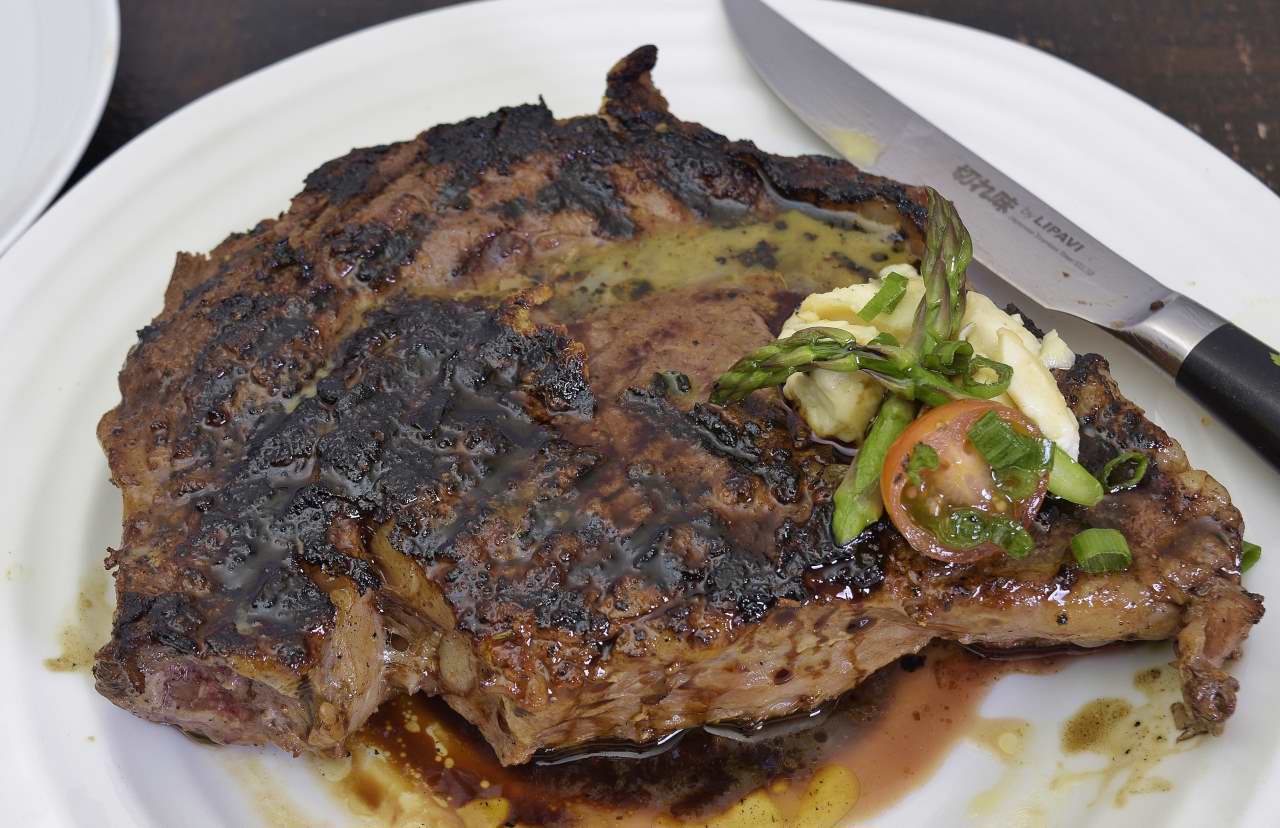 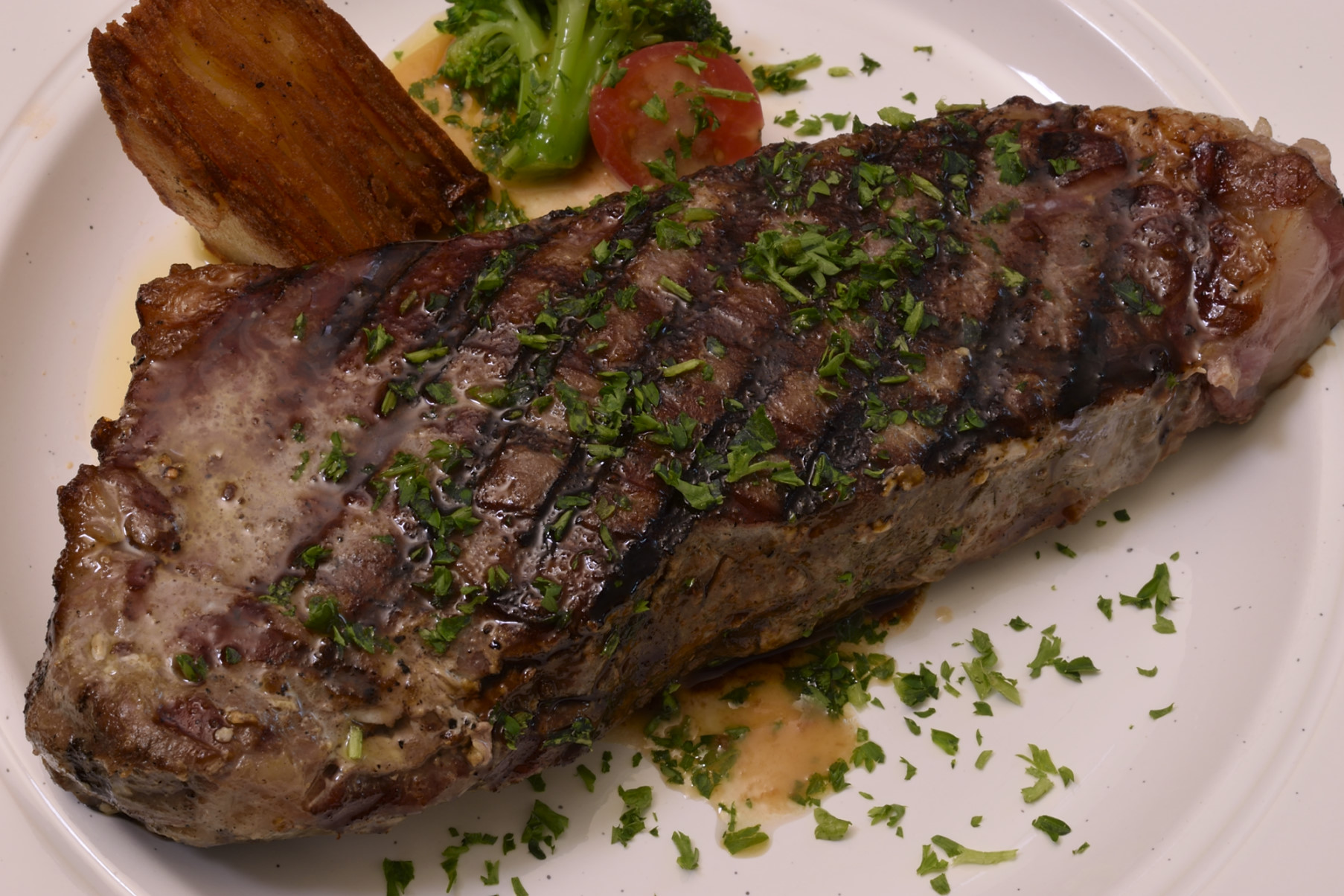 We've all been through it. We want to cook steaks for a group, it seems simple enough. But not everybody likes their steaks the way we do. Okay, no problem, we will accommodate them. We gauge rare from well by looking at the color on the outside of the steak. Soon we discover that doesn't work. It does not account for the intensity of the flame or the thickness of the steak.

We buy a meat thermometer. We discover the readings are only useful if you insert the thermometer to exactly the correct depth. Fail.

Someone tells us about the pinch method--you measure doneness by how springy the steak is. Makes sense. Hard to learn.

Oh, well, just burn them all and hope for the best! WAIT! STOP!