Magret duck breasts have grown in popularity and can be treated similarly to beef or even pork--cured, for example.

Typically, Prague powder corresponds to no more than .25% of the weight of the meat. Kosher salt comprises somewhere between 2% and 3% of the weight of the meat. What this means is that the basic cure by volume, (tablespoons, cups) is:
8 parts salt,
4 parts sugar,
1 part Prague powder. (click link to learn more and where to purchase).
The simplest application is to energetically apply 1 Tablespoon/lb. of this mixture to cure almost any meat. Use gloves and make sure every square millimeter is exposed. This is the same basic process used to make bacon, corned beef, city ham, and any number of other cured products. It can be used to make sausage and cooked right away–the effect is instantaneous because the meat is ground. Otherwise, dry curing should be allowed at least 5 days/inch from surface to center to fully penetrate. The meat should be flipped and moved around periodically.
Ground Black Pepper, as needed. 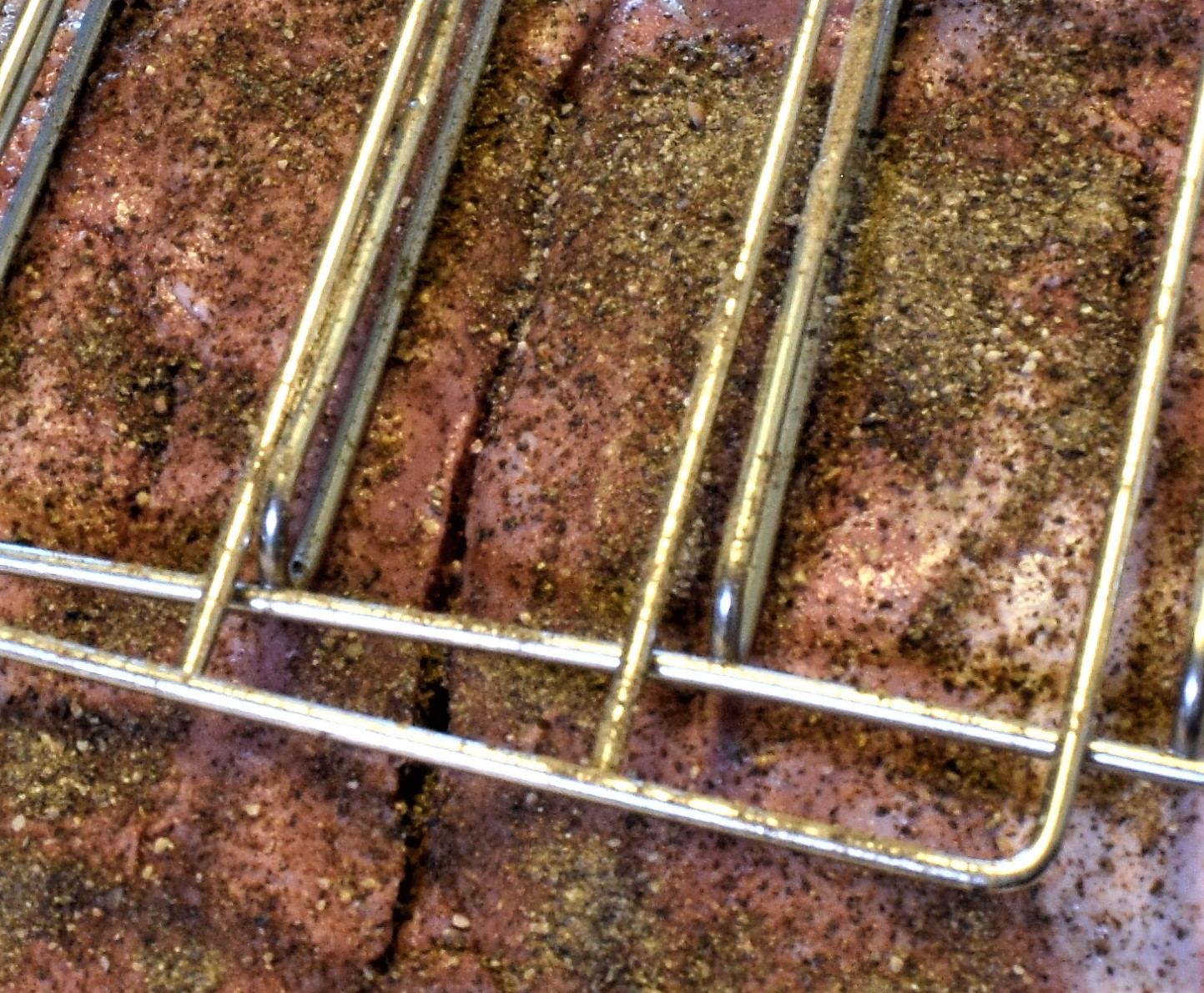 Not all curing formulae are exactly the same, but they differ only slightly from each other. Measurements must be carefully taken to get the correct and safe results. It may seem tedious. Keep in mind that proper curing kills not only common bacteria, but botulism as well. Once you learn basic curing formulae, it becomes very habitual.

Our duck breast weight 1.75lb./.8Kg., so, according to the formula above and in the linked article, we will need 1.75 TABLESPOONS of the curing mix. Tablespoons used on our dinner table are larger than measured tablespoons. Buy yourself a set of measuring spoons.

Wet brines are calculated differently, so do not attempt to translate directly.

Apply the carefully measured cure to the duck breast, and massage it in, as shown below. Gloves are an excellent idea. Wash your hands well afterwards, regardless. Seal the duck in a plastic bag, but do not vacuum. Vacuuming can actually retard the curing process.

Allow the duck breast to cure for one week. The cure must be allowed to fully penetrate the meat from surface to center. 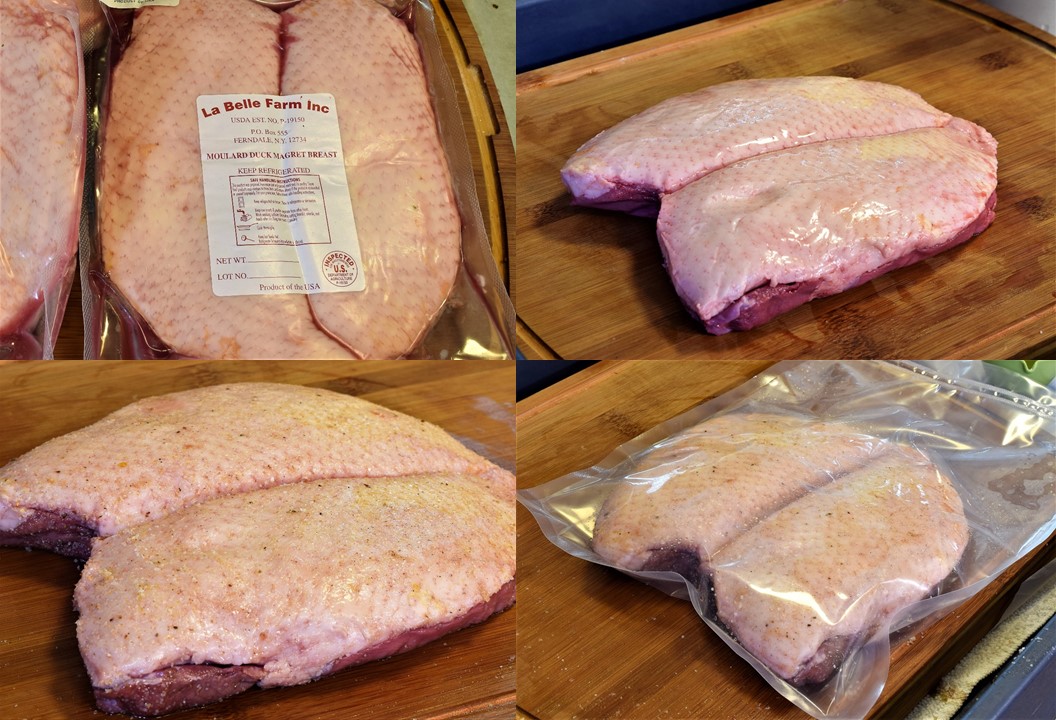 Below: One week later.

In the first frame of the slide below, we see the cured breast in the sealed bag with the skin side up. I put a little garlic powder in the cure so it does not accidentally get confused with table salt. The garlic powder will cling to the surface somewhat, but will not penetrate the protein matrix. The second frame of the slide is the cured breast in the bag, with the flesh side up. The third frame is the breast eventually standing upright in the Lipavi rack, just to give you an idea of the direction we are going. This is important so that smoke can come in contact with the entire surface of the breast. The fourth frame is the fully cured duck breast, skin side up. The fifth frame is the fully cured duck breast, flesh side up. 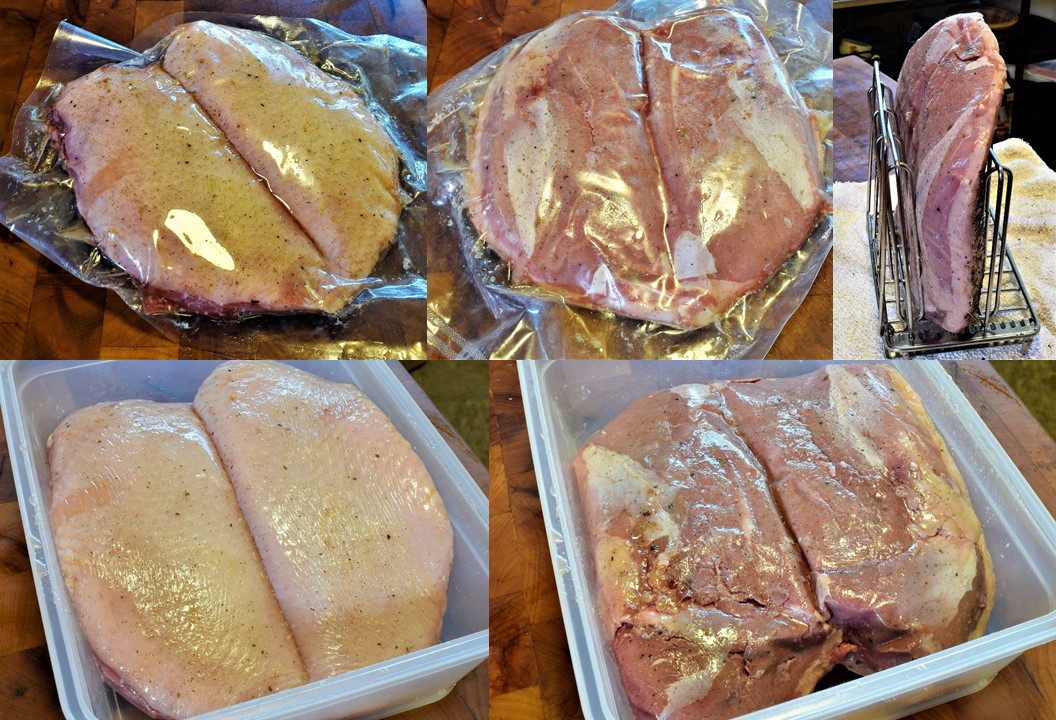 Pat the surface dry. Some people like to rinse the meat to remove excess salt, but this is not necessary if it was measured correctly at the beginning of the process. The amounts used will not give us an overly salty product–we are actually using just above the minimum amount allowed for legal curing. Now we vacuum seal the breast and process it sous vide @
129 F/54 C x 4 hours.

At this point the breasts are fully pasteurized, as well as being cured. Cold shock the bag in ice water to 70 F/21 C, and refrigerate all the way down to 40 F/4 C. This will allow the meat to travel from refrigerator temperature to smoker temperature without overcooking. This method also maximizes the amount of smoke that the duck will be exposed to.

Cut hash marks through the skin in two directions, as shown below. The low temperatures of sous vide will not render fat, and even the smoking process renders very little because the air temperature will only be 180 F/82 C. The hash marks will create a pleasing visual effect, much like the popular treatment of baked ham.

Rub pepper into both sides of the breasts. Again, only sodium ions can penetrate the tangled matrix of complex proteins. The pepper will cling quite well to the surface during smoking. 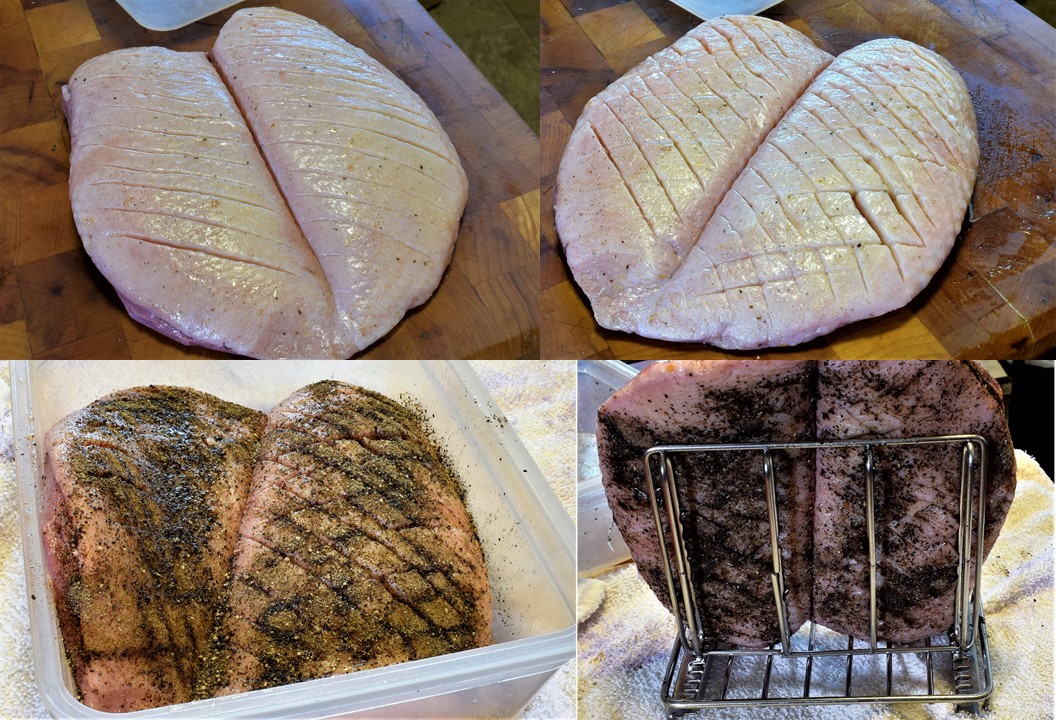 There are many grills on the market, and they all work. They all have some issue or another. This one is PID controlled like sous vide equipment, but because of the limitations of construction, temperatures still fluctuate 30 F up or down from target. If the temperature setting is too high, you will not get as much smoke flavor as you do at the lower temps. 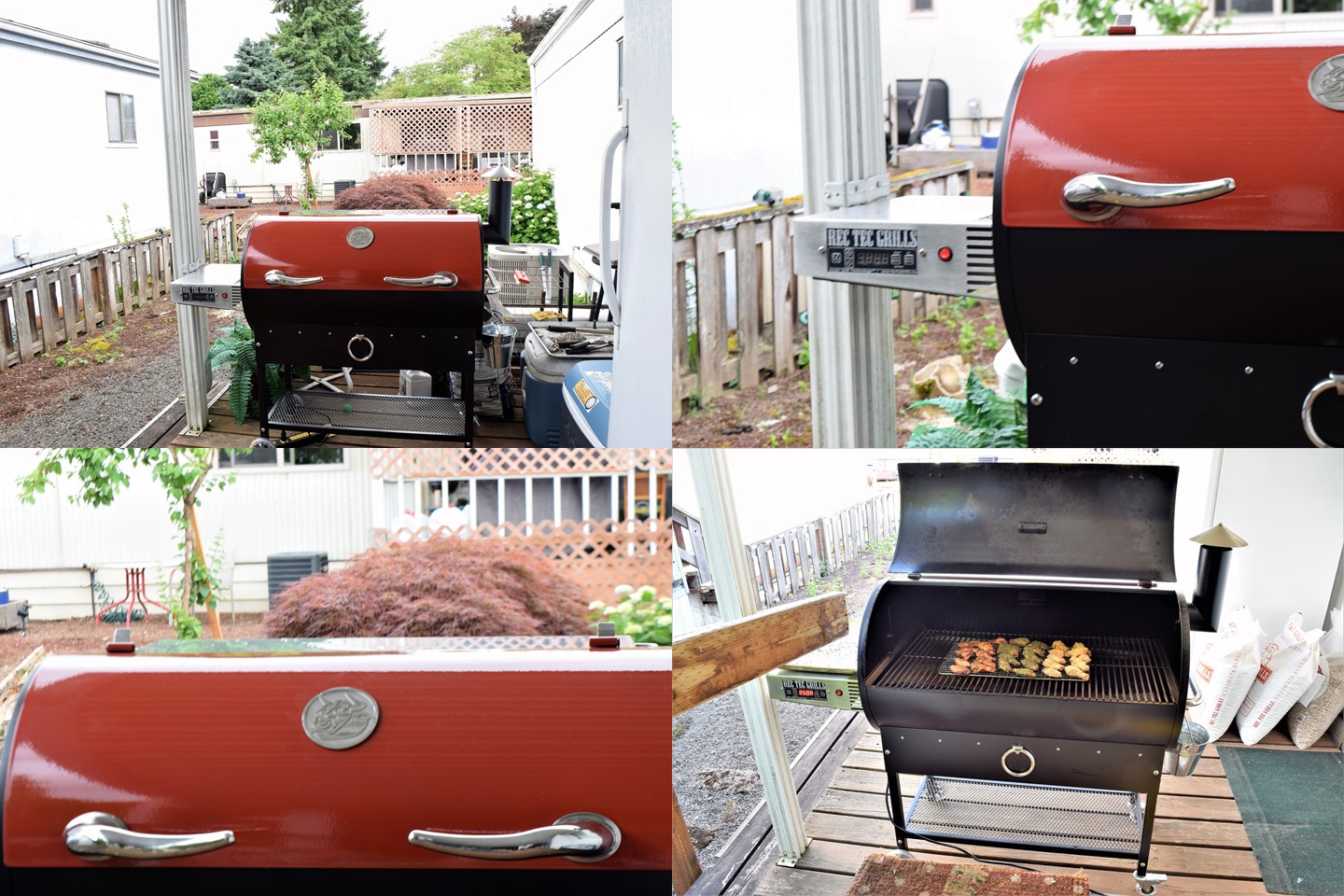 Stand the duck up in the racks. 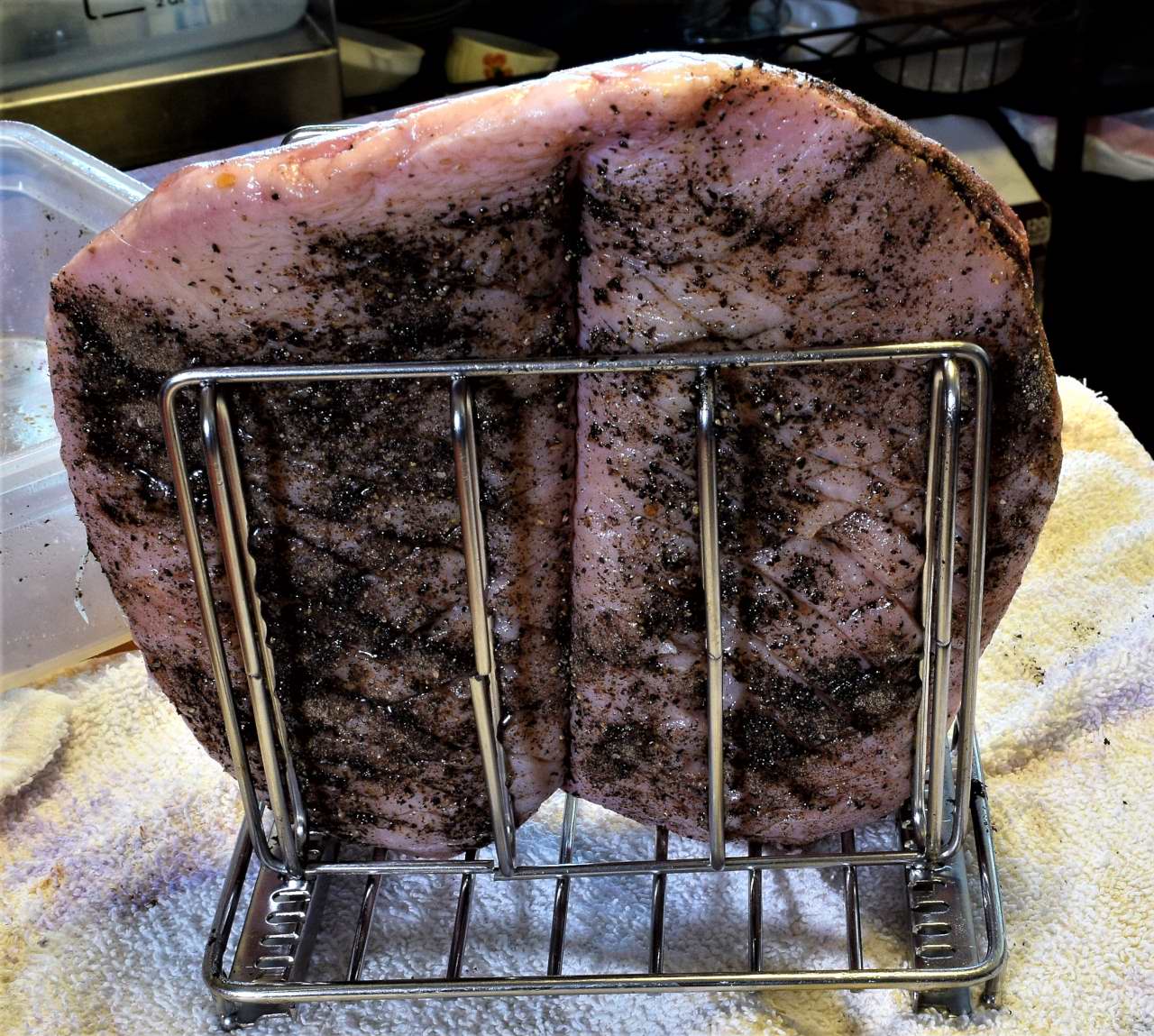 Once you have it secured the rack can be laid on its side to examine and add more seasoning as desired. The outside racks are connected to the base for easy transport. 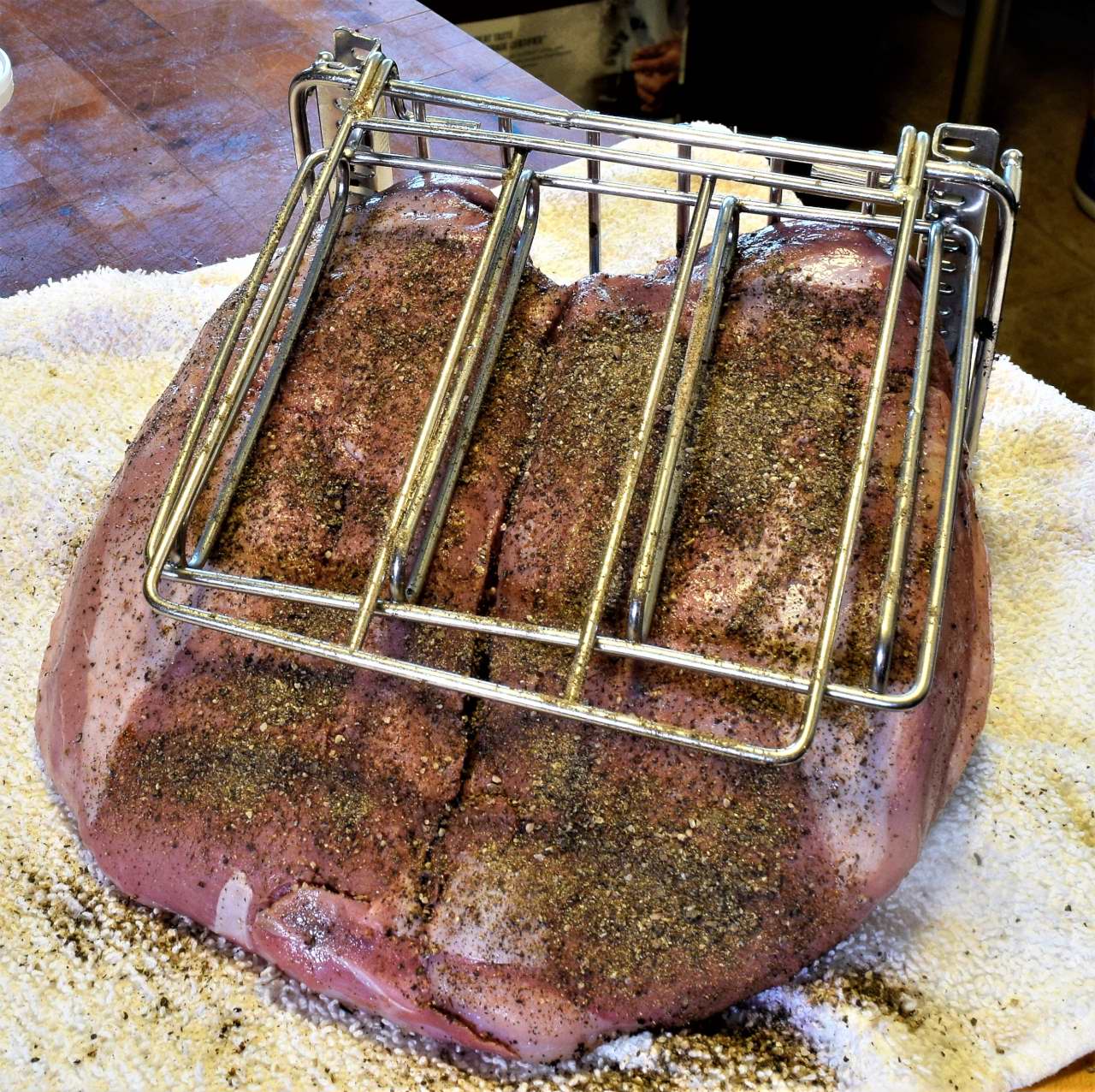 BTW, Lipavi racks are made of 316L, low carbon stainless steel, which for all practical purposes is impervious to alkalinity, dishwashing detergent, water, smoke, and whatever else you throw at it. It is the type of stainless steel that they use for surgery and body piercing jewelry, and it is the only steel really suitable for the harsh conditions of chlorine swimming pools.

HOWEVER, even 316L can be damaged if it is abused. Do not use steel wool or other abrasive materials that can scratch the metal, and do not let the racks rest in water in between use. 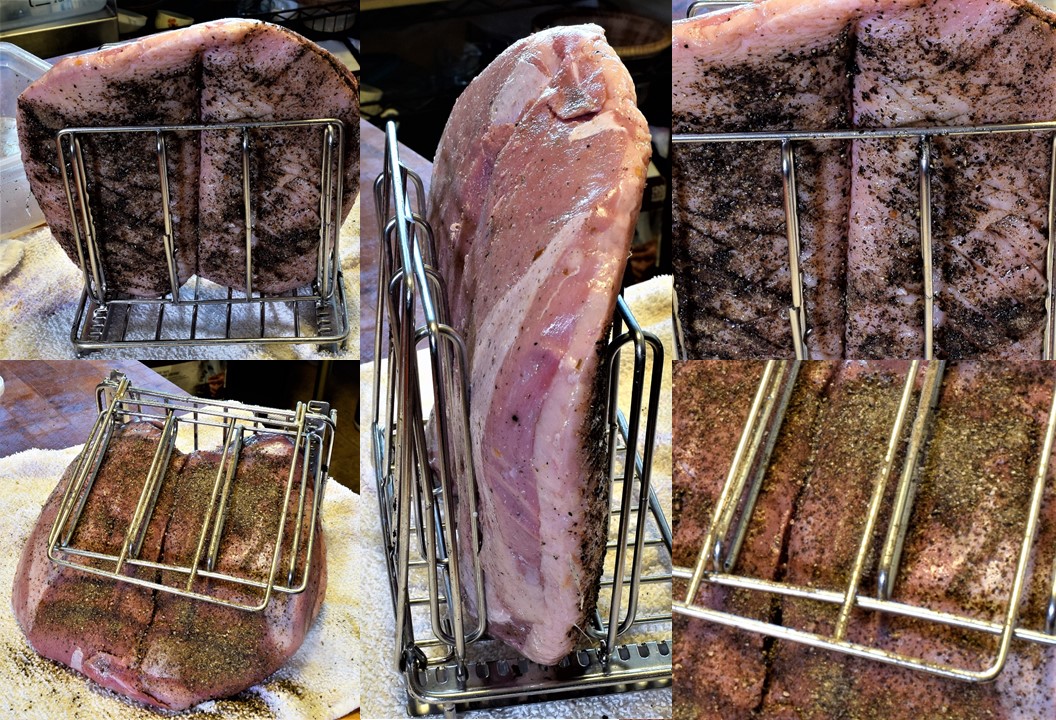 I make sure that everything is cold–the duck breasts should be 40 F/4 C, and the smoker is not turned on until it has been loaded. I want the duck to spend as long as possible in the smoker WITHOUT overcooking. 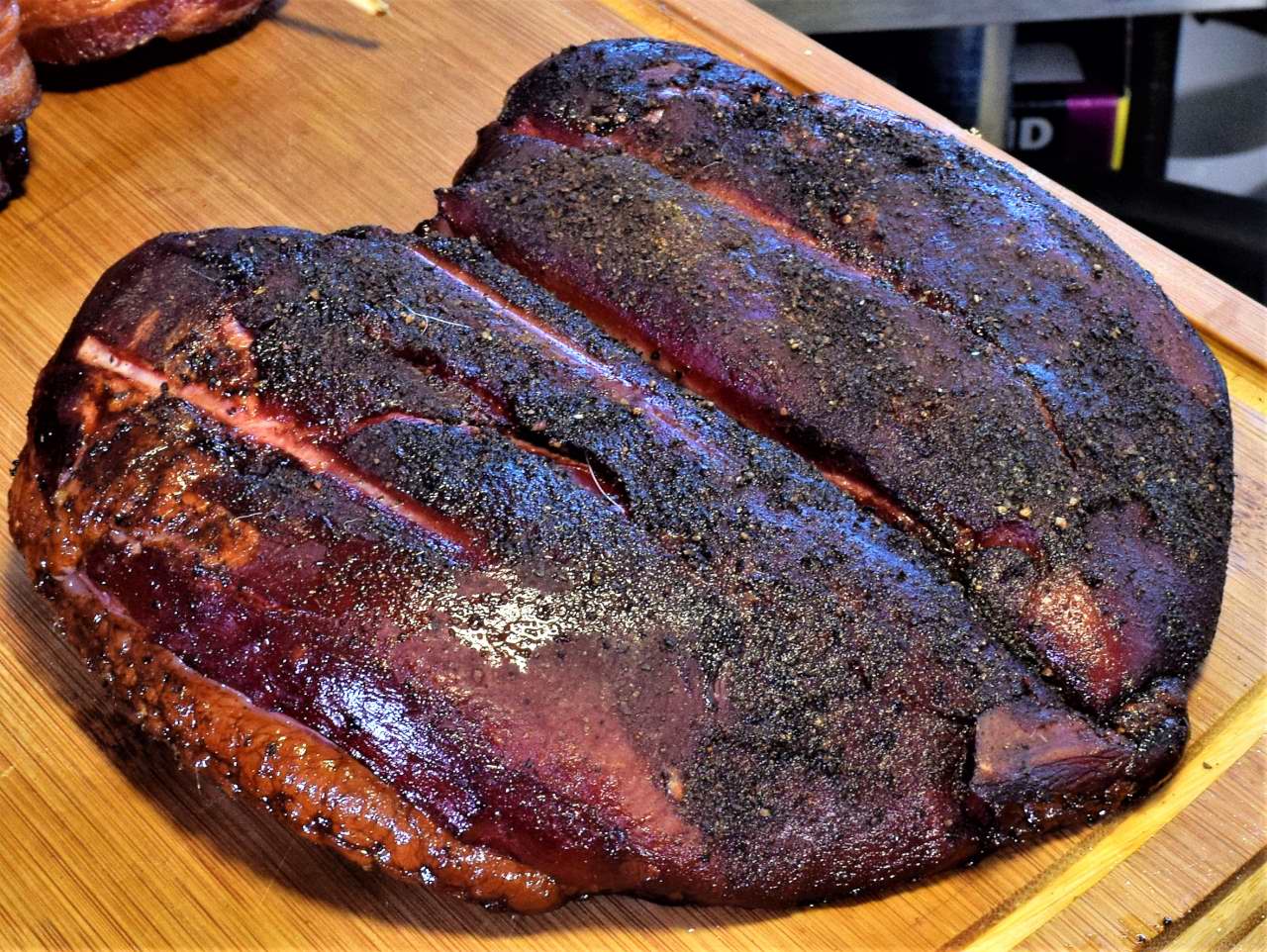 Yes, the breast is quite dark. This meat is high in myoglobin, which contributes to the beefy color. As dark as it is, it is still pliable to the touch. The crust is extremely thin, revealing an amazingly ham like color underneath: 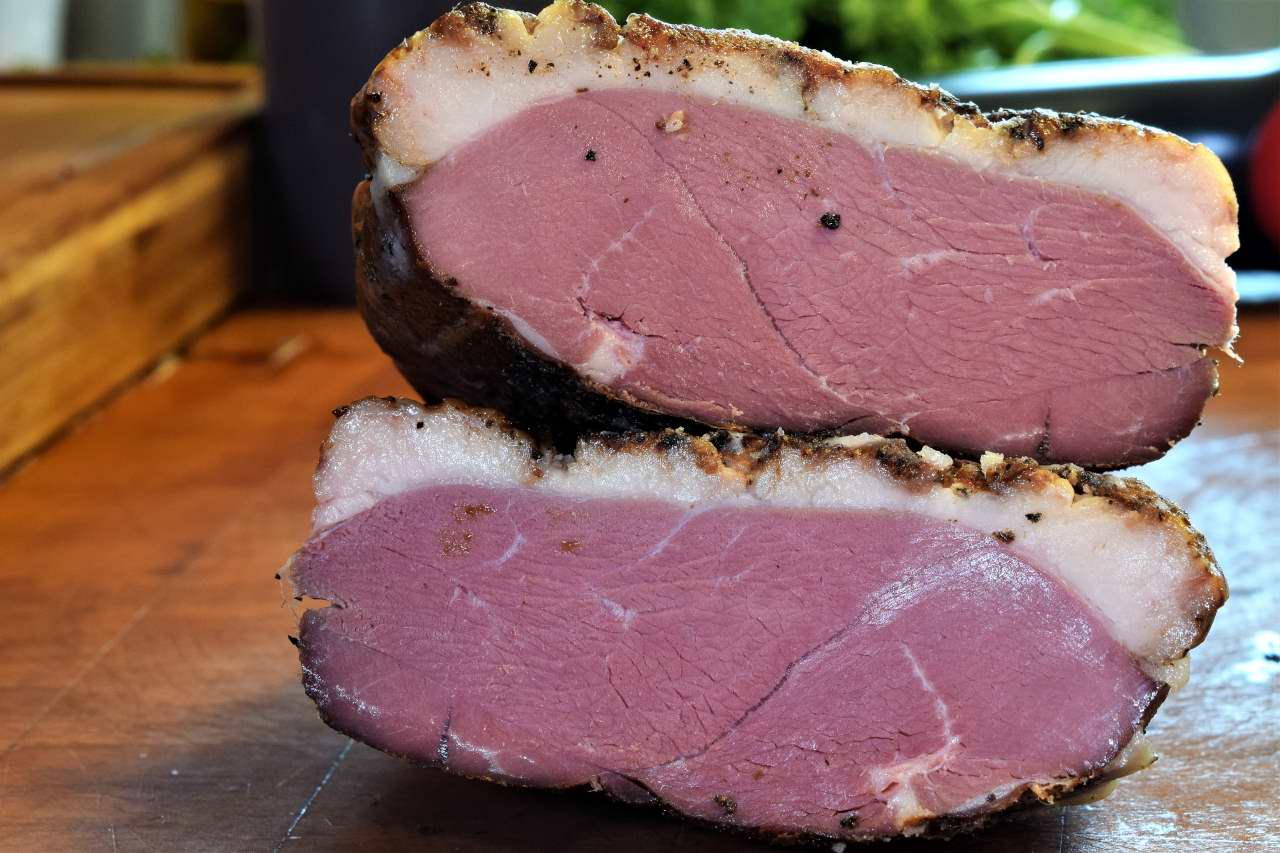 The smoky duck breast can be substituted for anything that you would ordinarily use ham for. But it doesn’t seem fitting to make an omelet or an upscale grilled cheese sandwich with it. The flavor is very intense, more like prosciutto than the stuff they have in the deli. Trendy places put it on pizza with figs and gorgonzola, that sort of thing, and that’s good.

I served it at a special event we had a few months ago featuring a wide variety of sous vide products. It was one of the most popular items, simply presented with crisp baguette nearby.

This time we tried something a little bit more elaborate…

There is no breed of duck called "Magret." Magret refers to the process of "strongly encouraging" domesticated Muscovies (and other breeds) to gorge themselves. Muscovy ducks themselves are quite a bit larger than the more familiar Pekin and Mallard ducks to begin with.