Feral pigs are smaller and leaner than domesticated ones. Even so, we process using the same time/temperature formula we use for pork.

Not only are feral swine smaller and leaner than domesticated pigs, they are quite athletic. Javelinas and African varieties give predators a discouraging serpentine chase. With the characteristic tusks in evidence, they are equally capable of defending themselves. This belies their image as sedentary, bloated barnyard animals. My understanding is that farmed pigs released “into the wild” take on the leaner, meaner characteristics in a matter of months.

Some people express concern over the risk of exposure to Trichinella, a parasitic worm that has been known to infest pigs. All pigs are vulnerable to this parasite, but modern sanitation has lowered the risk to almost nil. There has not been an incident of trichinosis from American commercial pork in over 80 years. Freezing alone is enough to kill Trichinella, and all commercial pork is routinely frozen immediately upon slaughter, as are the feral pigs.

Shock cold to 70 F/21 C in ice water. Refrigerate to 40 F/4 C before continuing. Cut the ribs in half (along the bone). Sprinkle with S+P and dust lightly with flour. Set aside.

Spaetzle:
By hand or in mixer, combine flour, eggs, milk, and salt to a smooth batter. Drizzle with a squirt bottle (tip cut half way down to accommodate), or squeeze through a ricer or slotted spoon into boiling water. Remove noodles a few seconds after they float, shock in cold water. Drain, reserve. Saute in butter until slightly brown at service.

Combine:
Cream, butter, and S+P in pan. Bring to simmer to thicken slightly. Cut the celery into large pieces and add; return to simmer. Remove from heat and stir in the cheese. Do not cook after this point. Use a slotted spoon to put the celery on the plate. Use a propane torch or the salamander in your oven to slightly brown the top. 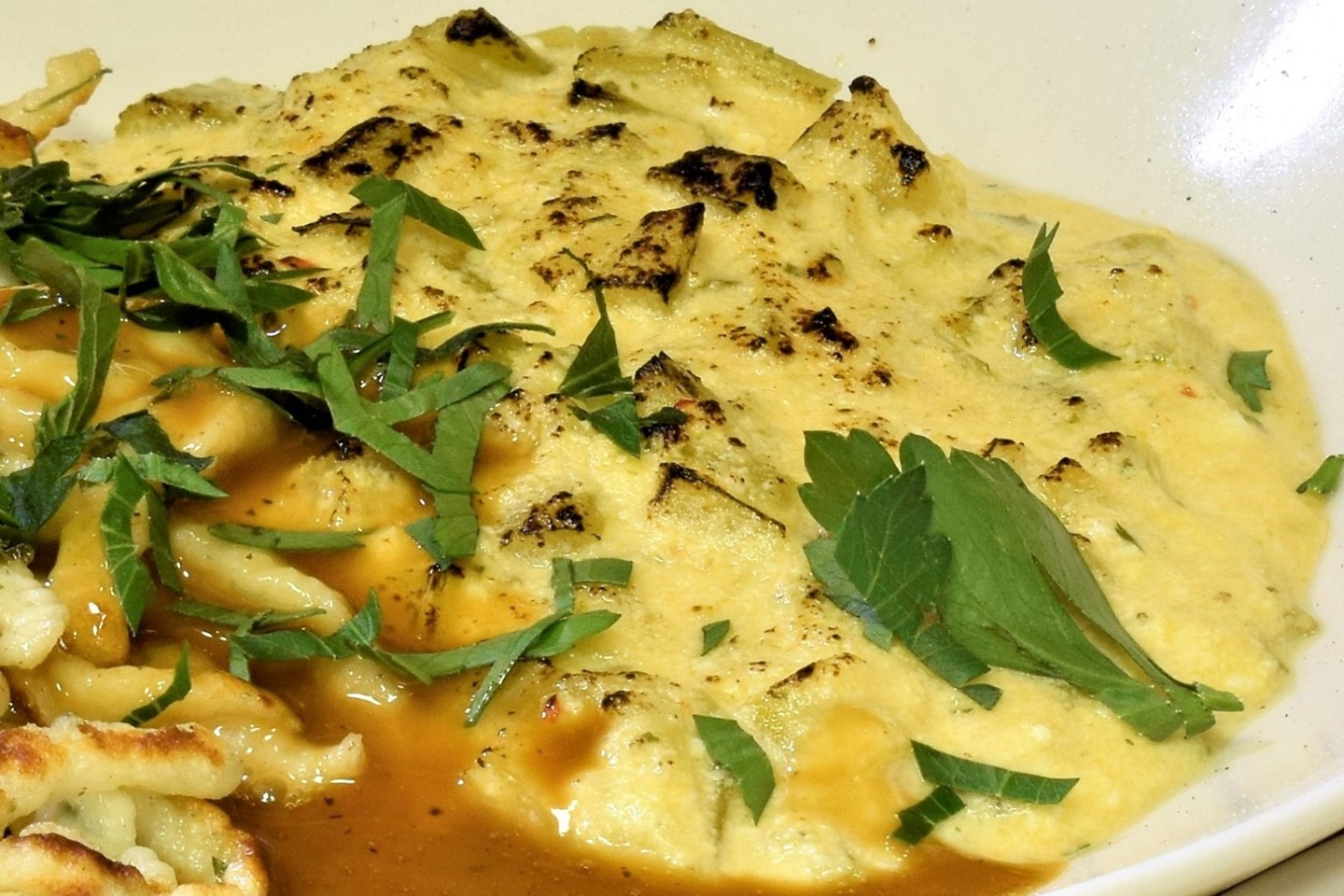 Add a few drops of oil and brown the ribs. This process should take about 5 minutes. Turn the meat, and add the Sous jus (or water), 2 cups/480 ml. Cover loosely, reduce heat, and simmer for 30 minutes. Remove the ribs from the pan, and reduce the juices to 1/2 cup/120 ml. Add the: Dark Side Sauce,. If this is not available, anything from generic steak sauce to ketchup will serve.

Melt the butter in the sauce, but do not let it actually boil. If you stir the sauce gently in one direction, it should incorporate the butter into a smooth emulsion. If this does not work, put the sauce in a 16 oz. rocks glass, let the ingredients settle and use a stick blender to create the emulsion, as explained HERE

Saute and arrange the spaetzle on one side of a plate and the celery on the other. Torch the celery gratin, cut the rib section in half again, place on top in the middle, and pour a generous amount of the butter over it: 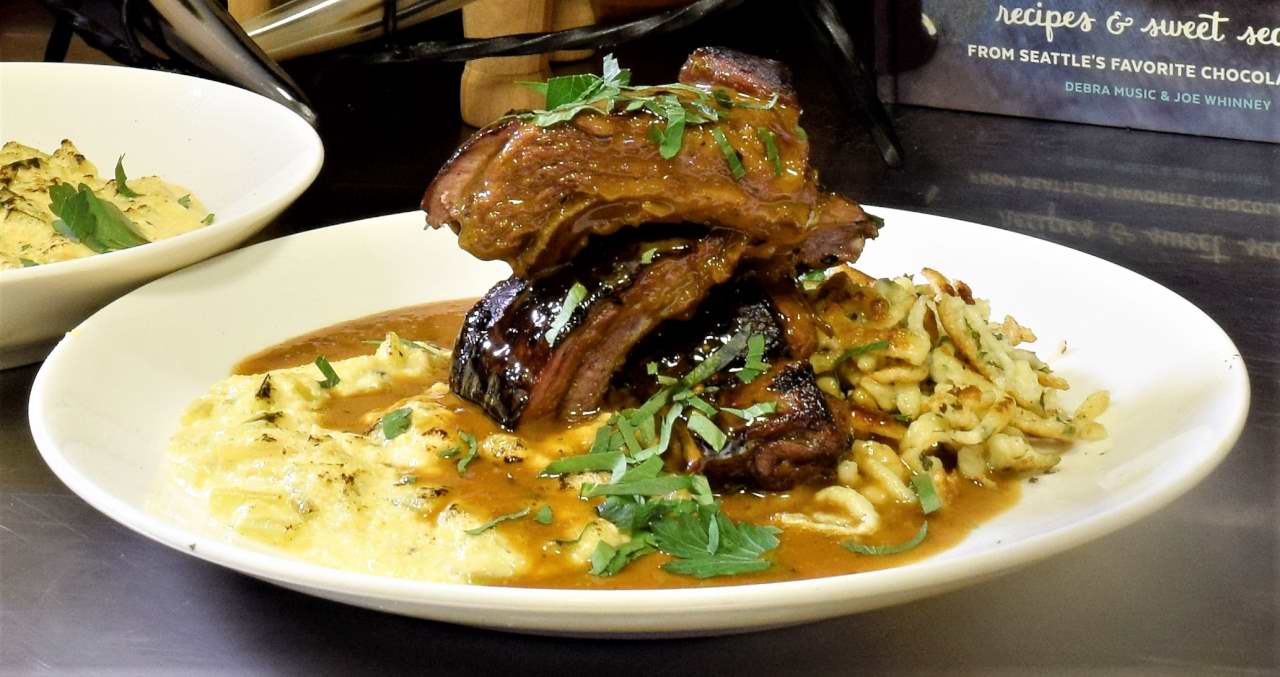 Instead of chopping, I sliced some Italian parsley and sprinkled it over the top. 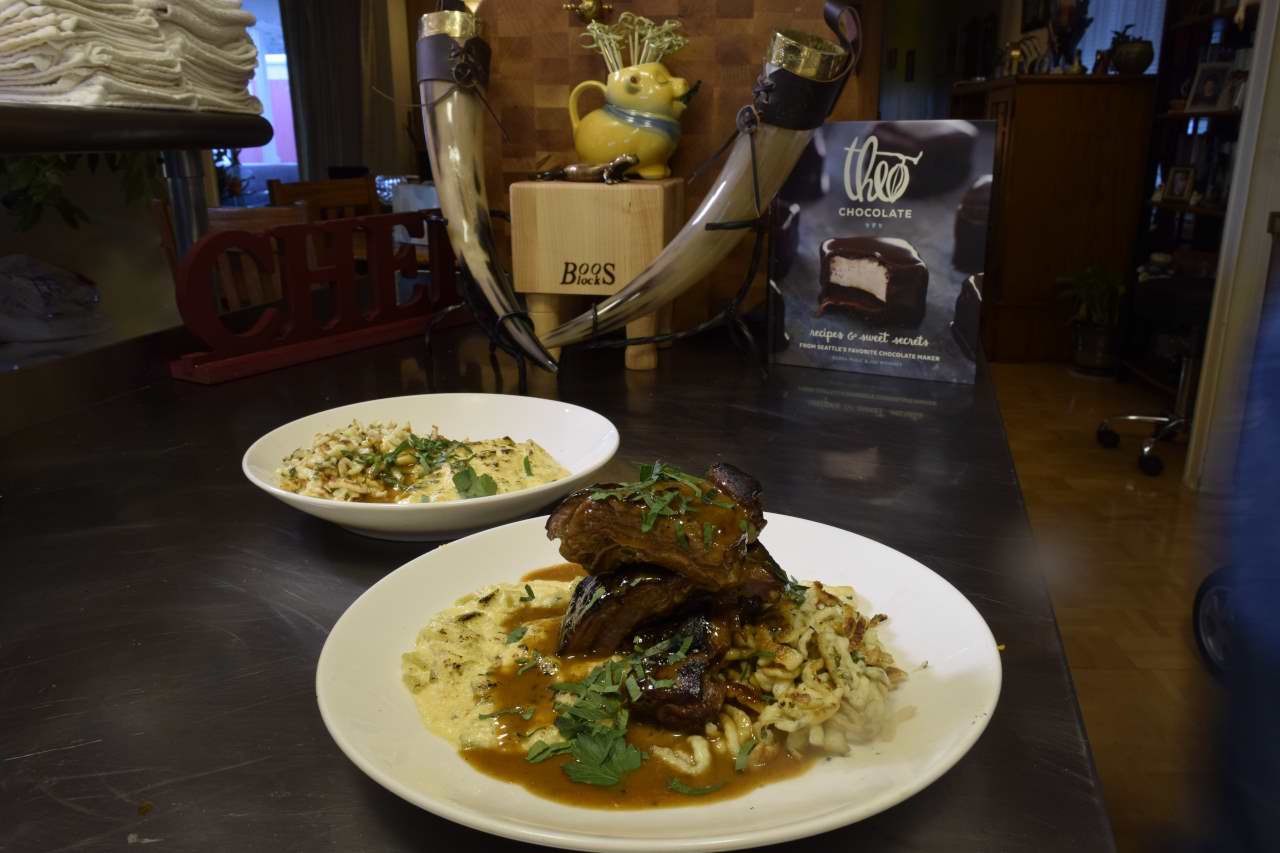 As you can see on the label below, the wild boar has been USDA inspected. Sous vide pasteurization time/temperature models are designed to kill Salmonella. Why is that? Because Salmonella is the hardiest of all pathogens--much hardier than trichinosis, hardier than E.coli, hardier than all the pathogenic organisms. All other pathogens are destroyed BEFORE salmonella, so there is no need to sous vide process wild boar any differently than pork or any other meat.