Some of us remember the jello molds that our mothers made when we were children in the 50's. This is an updated version.

Skilled Chef Gardemangers were highly sought after and prestigious until the mid 20th century. Ice sculpture, chaud/froid, canapes, hors d’oeuvres and pretty much anything served cold all fell under the traditional category of Gardemanger. The time and labor intensive craft lingers on cruise ships and in fancy hotels, but most cooks and even chefs cringe at the excruciating discipline and patience required to learn the repertoire.

Additionally, the demand is practically non-existent in the States. Even the idea of coating food with a protective sheet of gelatin is unsettlingly unfamiliar, and enough to turn off otherwise sophisticated diners.

Somehow, early in my career, somebody got the idea that I should learn the principles of Gardemanger. I may have been tricked into it, I don’t really remember, and I managed to escape before any real damage was done to my psyche. I did manage to learn enough to entertain a casual interest in it, along with an appreciation of the laborious precision and care that goes into it.

The great things about working gardemanger is the kitchen is cool instead of hot, and people leave you alone because they don’t want to get stuck with your job.

Heavily reduced stocks can have enough gelatin to make terrines and the like, but powdered gelatin is always used to streamline the process. A lot of chefs don’t even season the aspic coating, but there should be salt and a little vinegar in it. These dishes are heavily handled after cooking instead of before, so they pose a higher risk of contamination. The vinegar has antibacterial effect, so it really is a good idea.

Gelatin has a very small temperature window between being too thin or too solid to distribute. This is one of the many things that requires a lot of sensibility when using it.

Gardemanger is not dead, but it is definitely on life support. Practitioners learn to “feel” 70 F/21 C and the rest of us have to bounce back and forth between heating a little and cooling a little to get the aspic the right consistency. Once you figure that out, you pour a layer of gelatin in the bottom of a terrine like the one below, or an appropriate container with a flat bottom approximately 3″ deep. Plastic storage containers actually work pretty good for this. 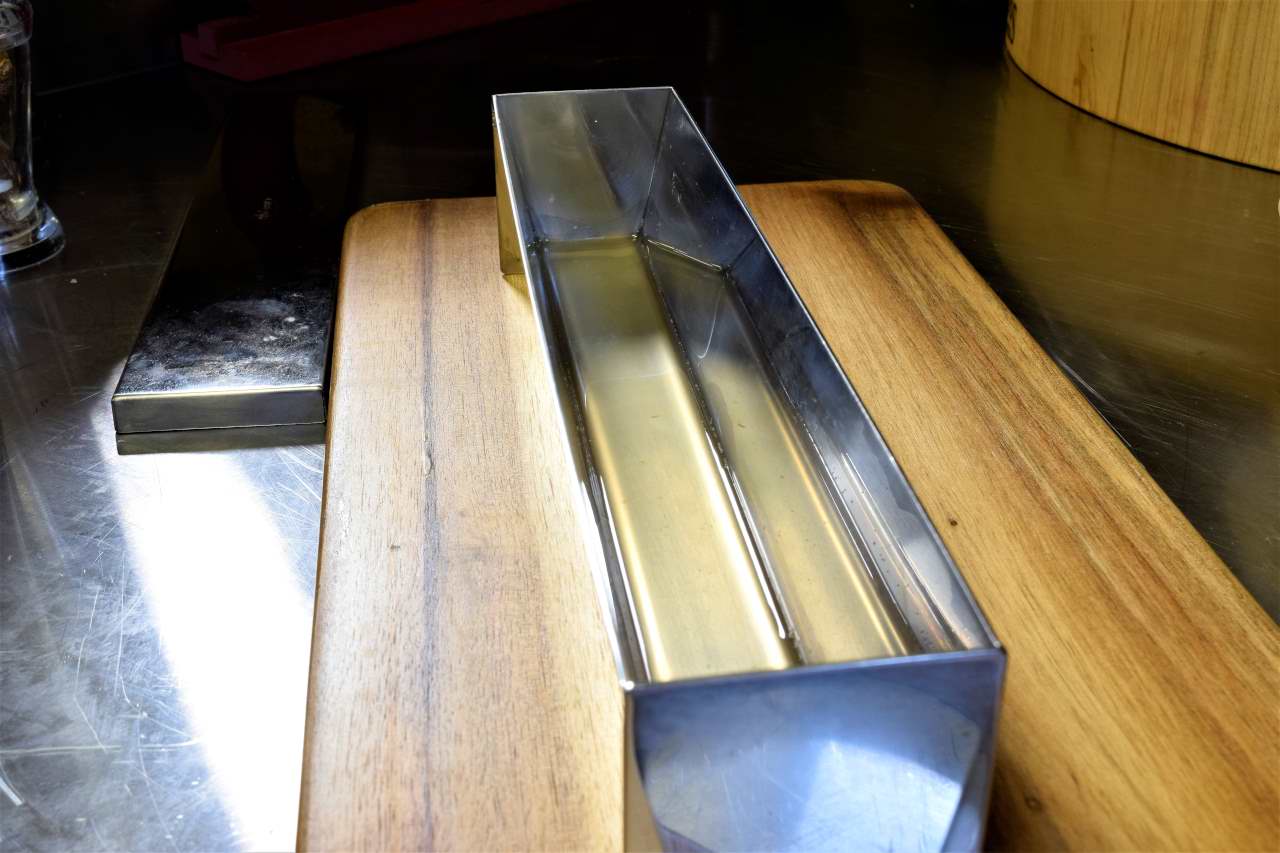 Procedure:
Combine and mix well:
The Cream Cheese, mayonnaise, and the Ranch dressing powder.
Take half of this recipe and combine it with 1 cup/225 ml of the aspic described below.

Gelatin/Aspic, how to make:
Sprinkle four envelopes plain gelatin over one cup of the water to bloom. Bring to boil 3 cups/.75 L water. Pour the hot water over the gelatin mixture, add a pinch of salt, the vinegar and
a pinch of saffron (optional, but very cool).

The gardemanger kitchens in fancy hotels are kept at temps cold enough to make the aspic set at ambient temperature. Again, we are left to going back and forth in and out of the fridge to achieve our goal. After this first layer sets, carefully layer the cured and smoked duck breast in the terrine. 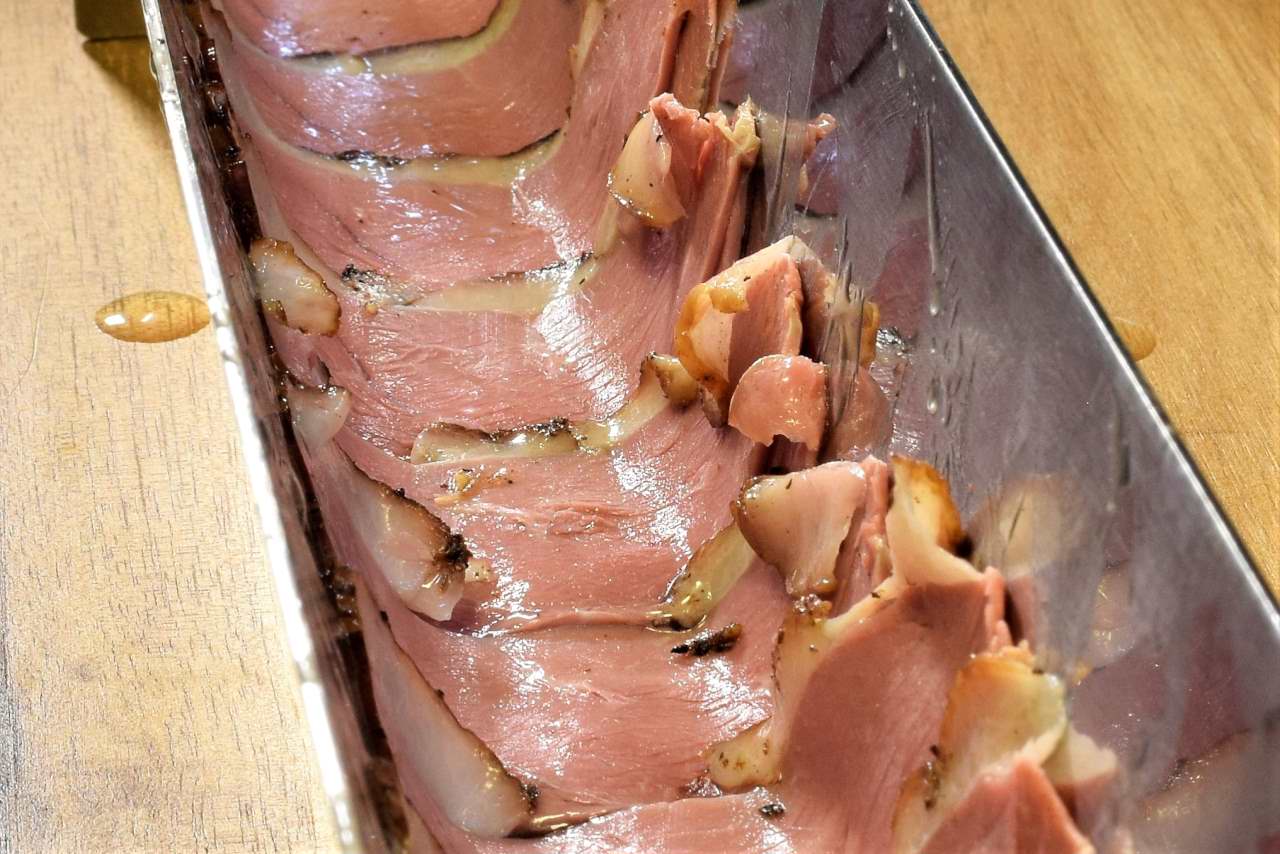 Take a deep breath and paint with 74 F/23 C aspic. Lay in another layer of the meat. Continually drizzle a little gelatin to keep everything glued together. If you don’t, your terrine will fall apart when you slice it.

In the next step, sprinkle grated or julienne radishes into the well created by the duck. Distribute evenly down the length of the terrine. I was too anxious to even to take a picture of this stage. Again, pour some thin 74 F/23 C gelatin over the radish to coat. The alternative is to toss the radishes with gelatin before putting them in, but I find that this creates a sticky mess. Refrigerate the terrine to 68 F/20 C or lower.

Chaud froid literally means “hot cold.” The French always find a way to add a little mystique to their terminologies. Without explaining how chaud froid was made in ancient times, I will confess that I combine gelatin, water, mayonnaise and cream cheese with a little Ranch powder to make a white aspic. Sour cream, crème fraiche, béchamel, there are a million versions. You pour a little of this over the radish mixture, but you have to make sure it is starting to set, right at 70 F/21 C, or it will melt and merge with the layers below. I usually warn people not to come in the kitchen when I’m doing this stuff. 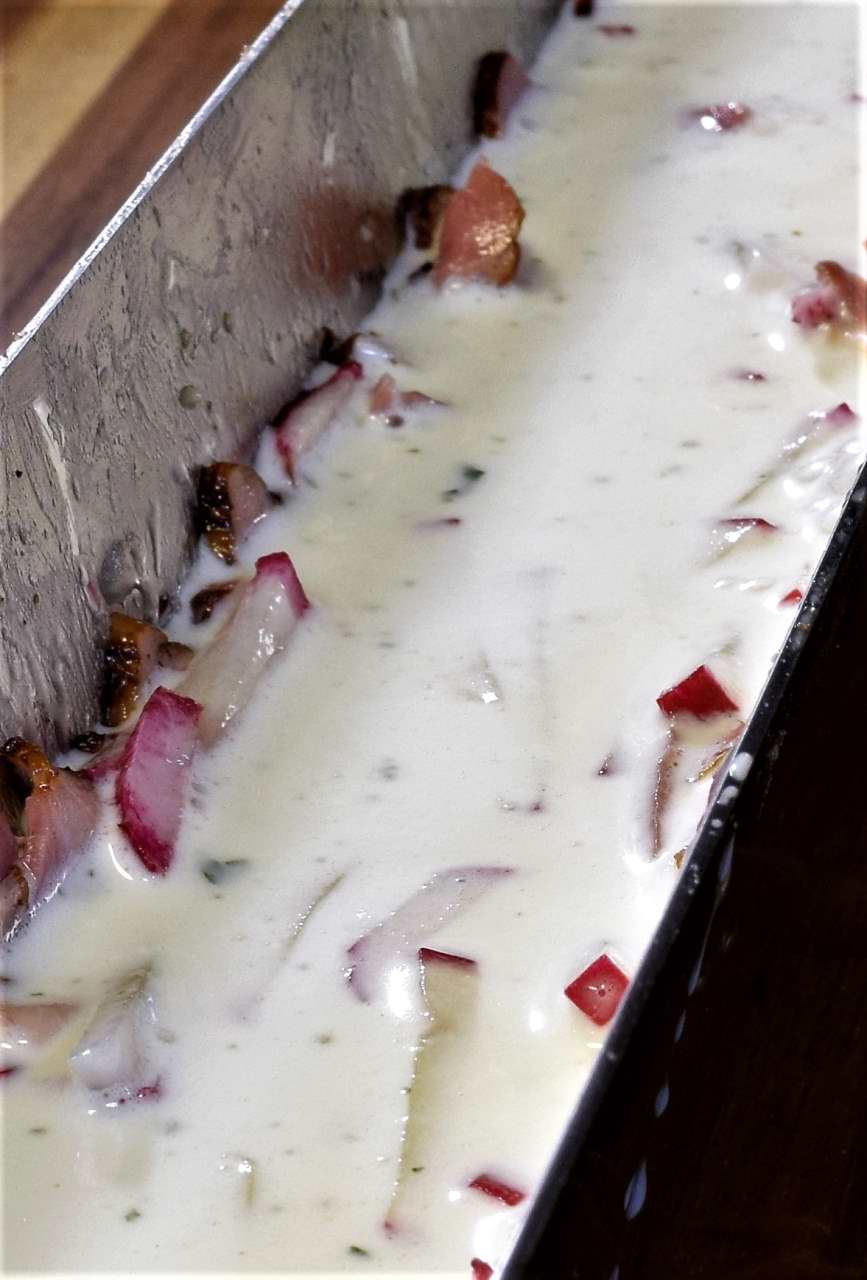 Stop, take a breath, and let the white aspic cool before you start layering the thin slices of duck again. Sometimes these things have many, many, layers, I just don’t have that kind of patience OR skill.

Eventually, you build the terrine up until it is perfectly full, but not mounded over the top. If you make the mistake of making it too high, it becomes very difficult to remove from the terrine, sigh. 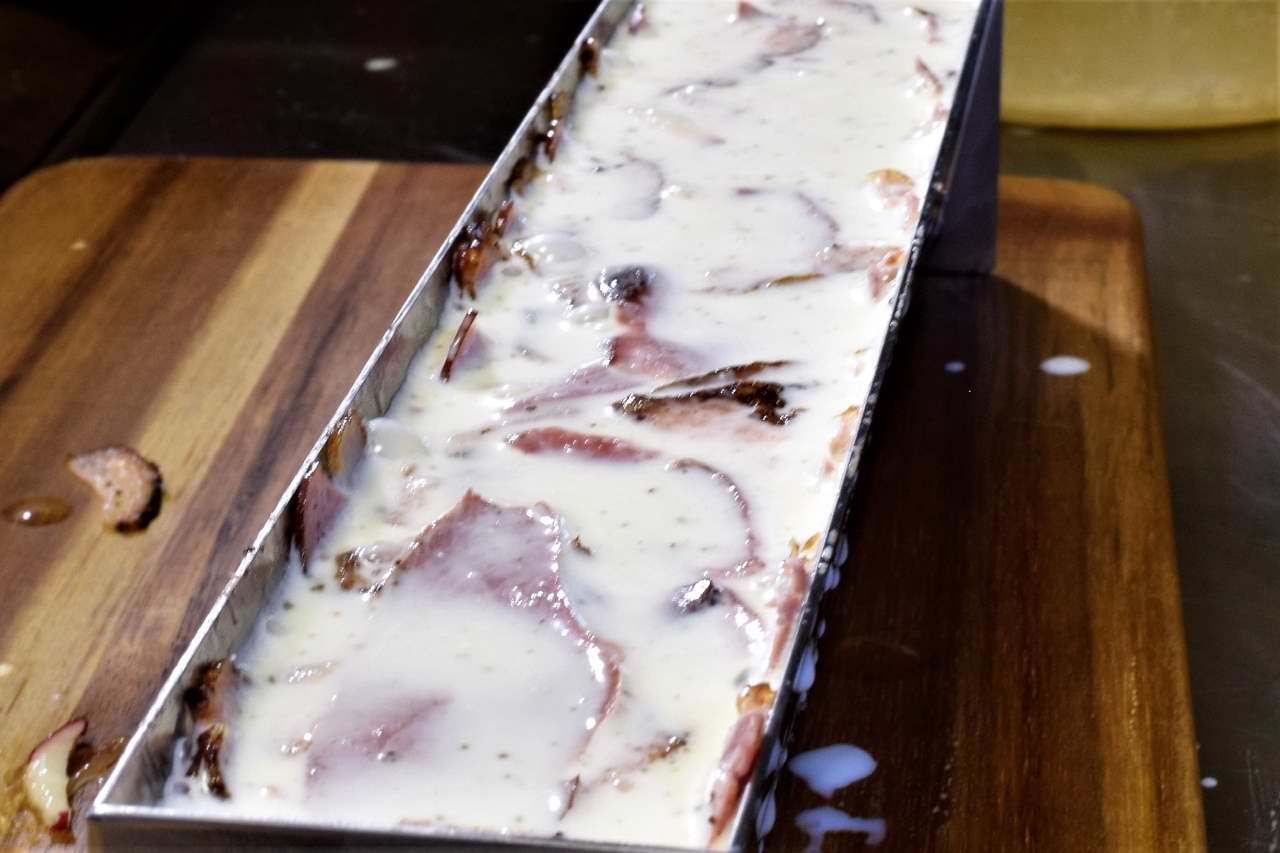 Once the terrine is completely chilled (overnight), dip it in warm water to melt the outer level of gelatin. If you watch around the edges, you can see it starting to melt. That’s right, if you melt it too much, you have a real mess on your hands. I like to just flip the terrine over and wave a propane torch over it, including the ends. 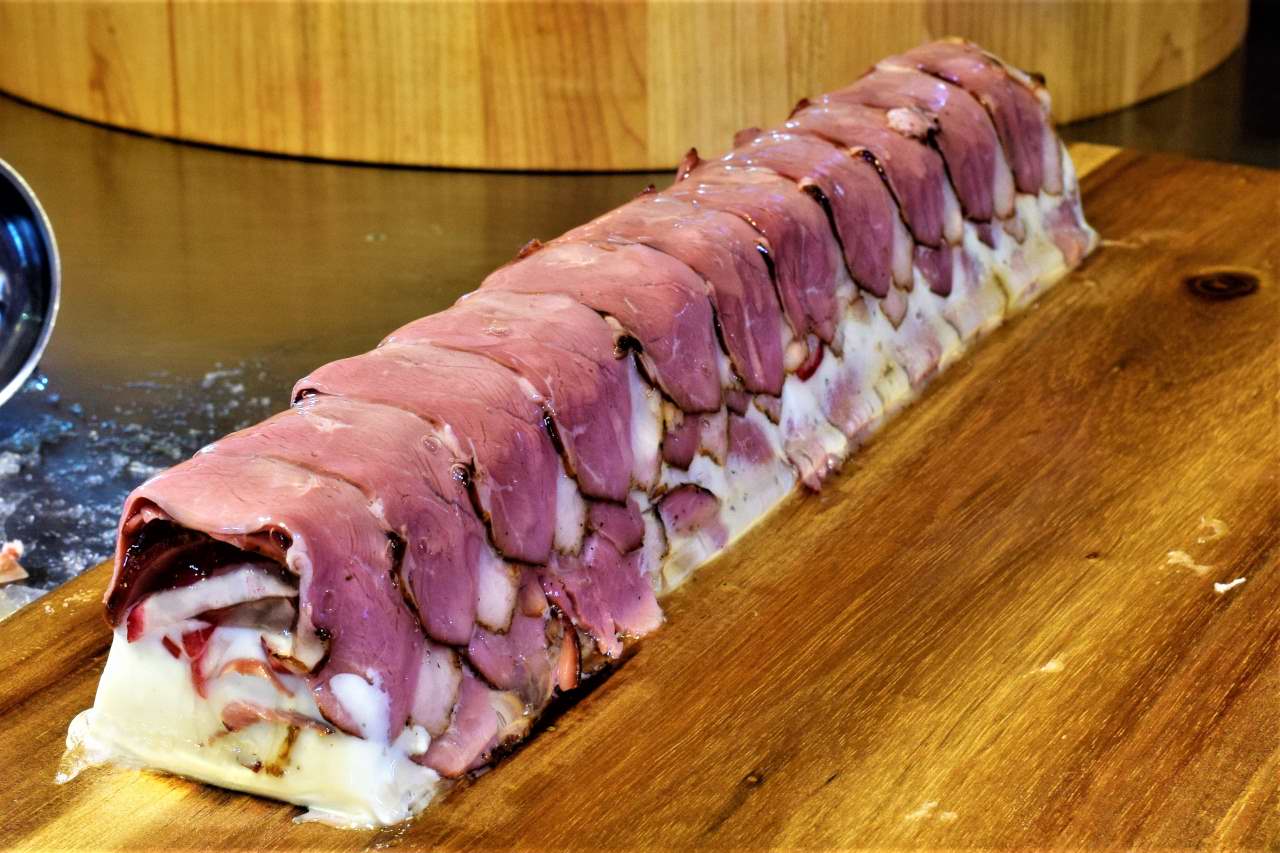 You listen, and, like I said, if it’s not mounded too high, you will hear that slorchy, de-vacuuming sound as your masterpiece gently thunks out of the mold. 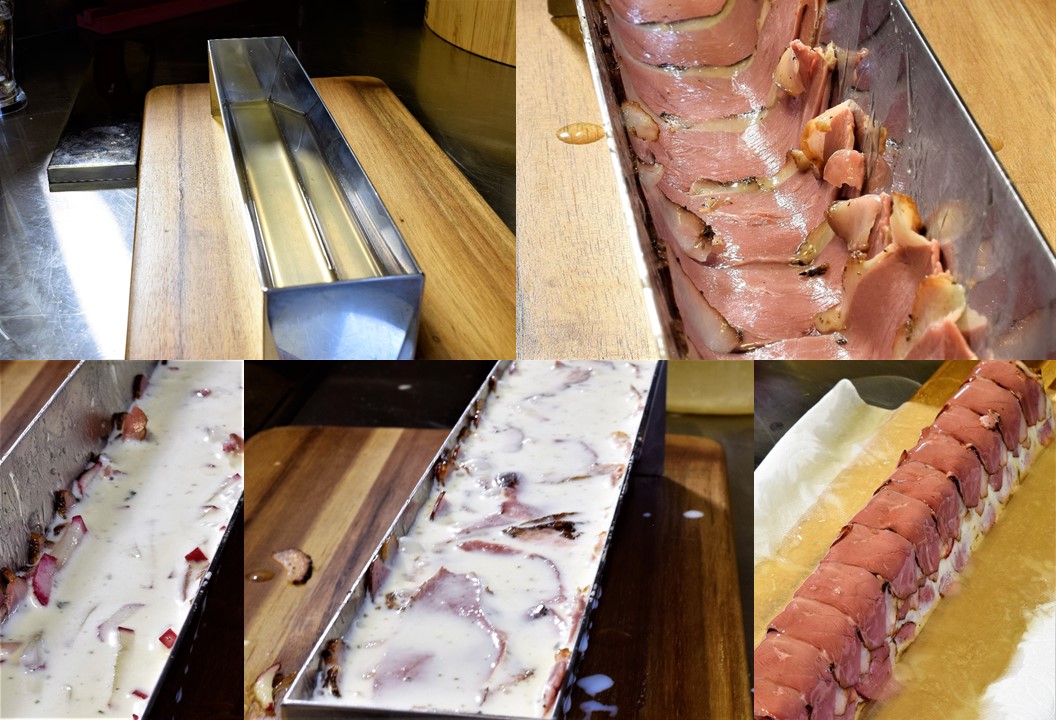 I would love to tell you that that’s all there is to it, but it’s not. Our labors have only just begun. The apprentices are required to do all the stuff we just did, and then the experts take over. It already looks pretty cool though.

Once the terrine is turned out, layers of 70 F/21 C gelatin are drizzled over it again. The masters can do it with one or two sweeps with a ladle. The rest of us may have to apply several layers to achieve the “coated in glass” effect. If you manage to turn the terrine out on a screen, the excess gelatin will fall through. This also means you have to remove the whole terrine from the screen intact later.

The alternative is to aspic the terrine on a board, and then carefully scrape away the excess gelatin later with a spatula. That’s what I do. I lay a paper towel on each side and it soaks up the thin gelatin. Then, I heat up the paper towel in a microwave and rescue some of the gelatin. 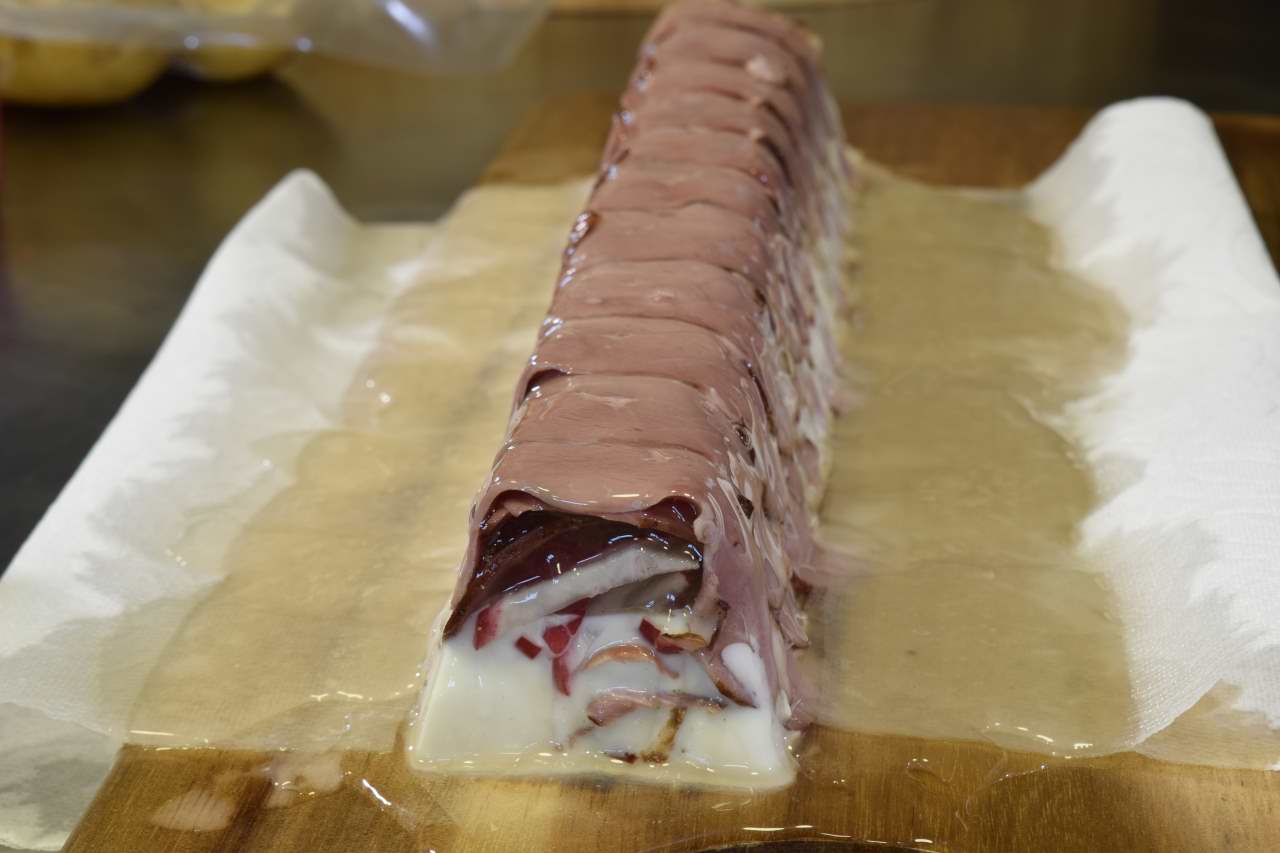 Different decorations are applied, everything from chopped parsley to Viking Sword images to Hopi Indian designs, and then coated with gelatin again. This is where most people just throw their hands up in the air and make some tasty sandwiches. 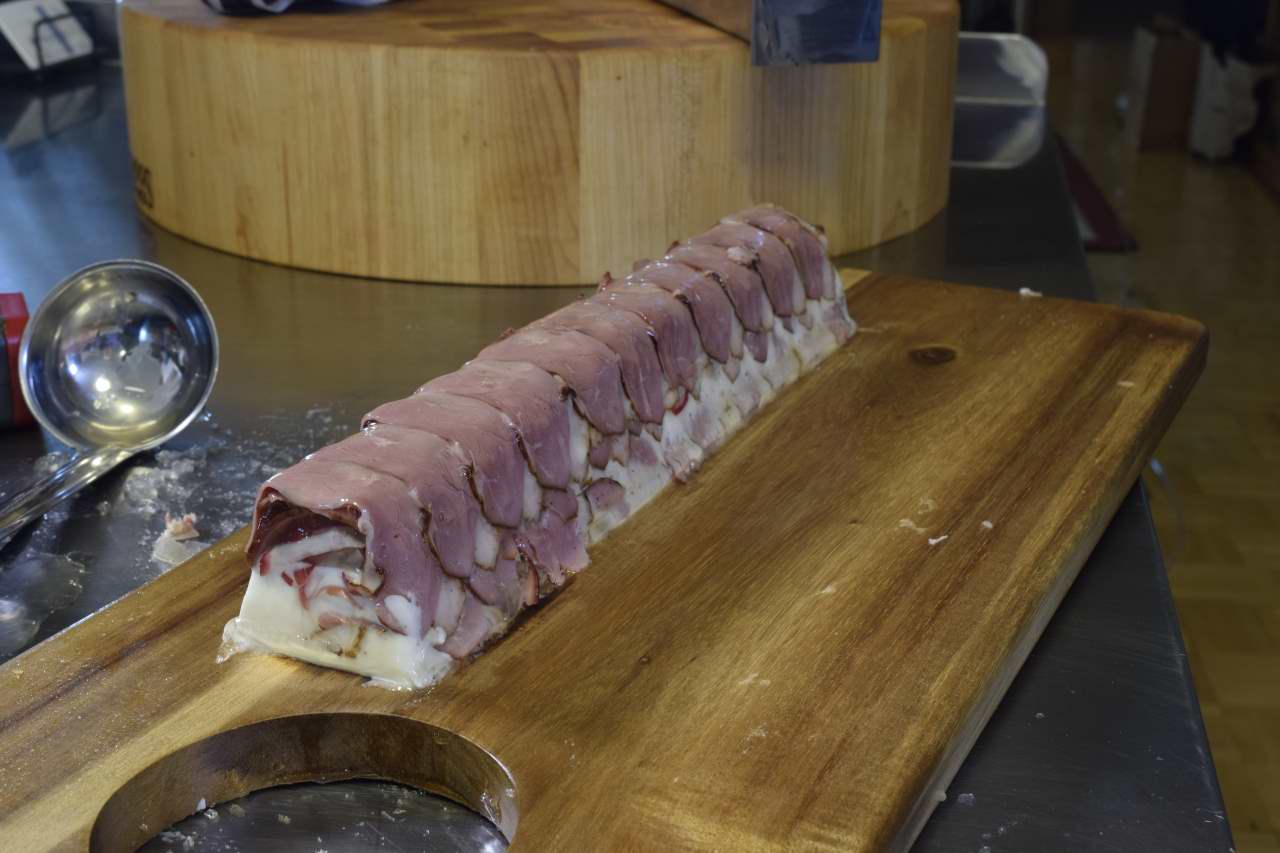 I did a layer of parsley, and I’m not going to pretend that it came out perfect. Rather clumpy. I’m a little rusty. If you don’t get on the Harley for a while, you run the risk of dropping it at some point when you mount up again. I dipped some thin sliced pickles in the chaud/froid and carefully laid them on top. Then, another drop of the chaud/froid, and a caper, and of course more gelatin, until I had the thing. 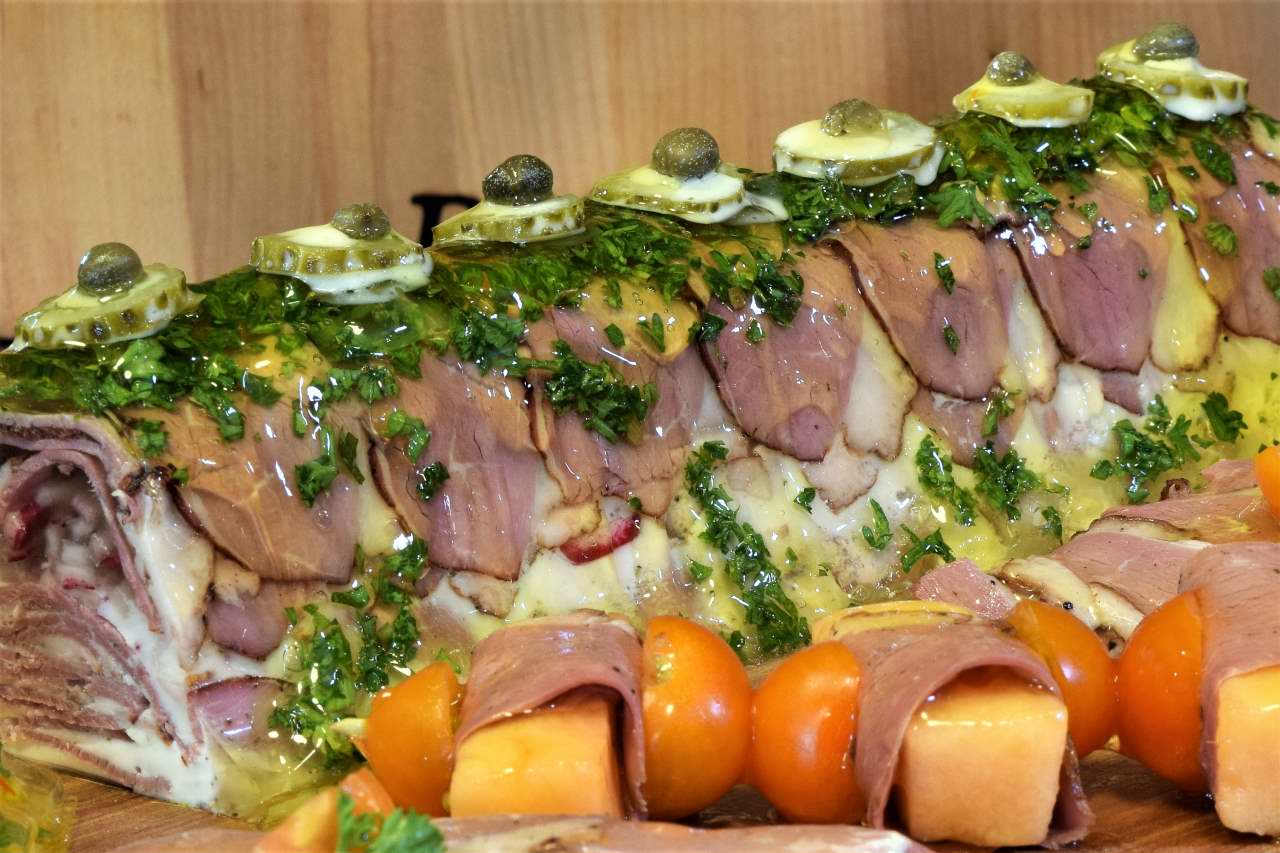 Take a slice of bread and spread some of the thick Ranch dressing (without the gelatin added) on it, and arrange slices of duck on it. Trim off the edges so it’s rectangular, cut into triangles, put the open faced sandwich on a screen and cover with gelatin, that’s right, more aspic. One fourth of a cherry tomato, a spriglet of parsley, and more gelatin. 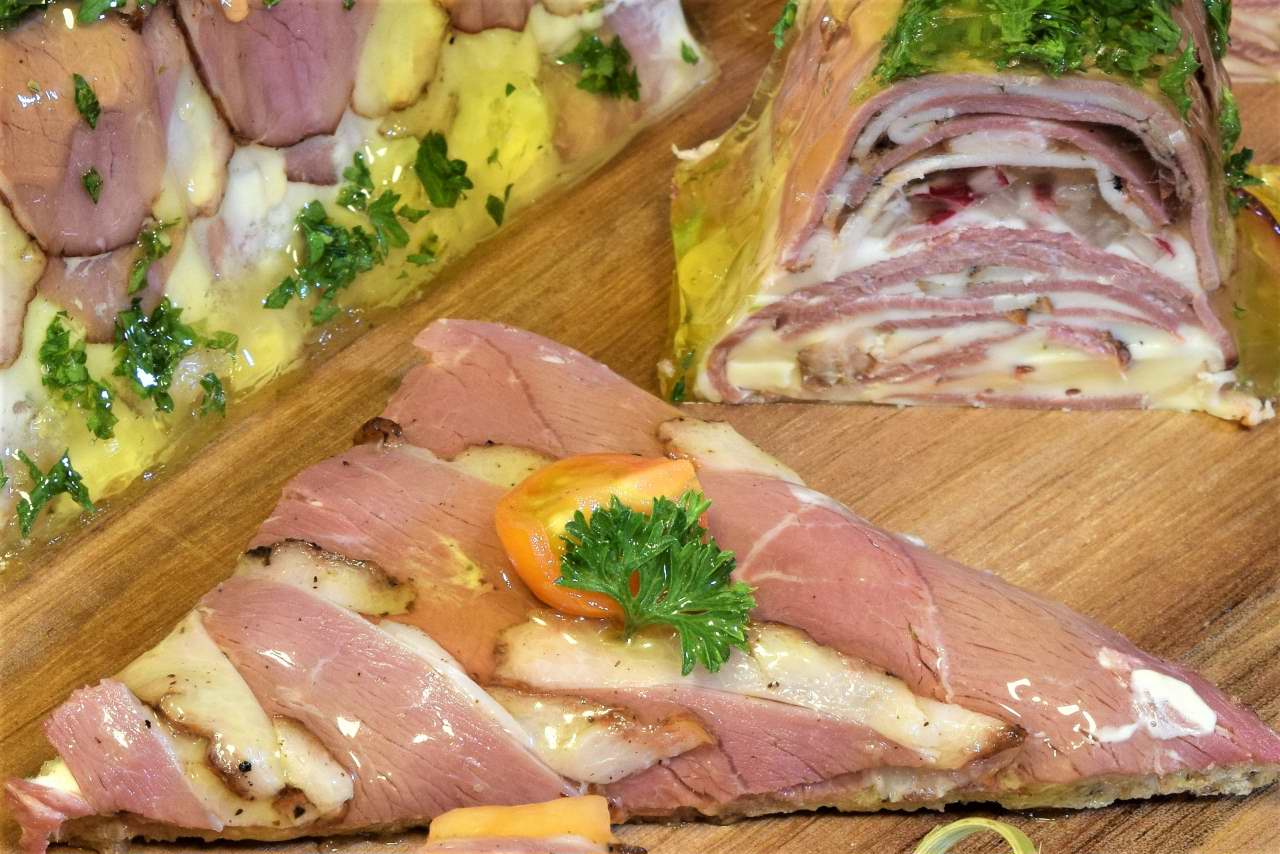 Cut perfect little rectangular monoliths of cantaloupe, wrap in the sliced duck, and alternate on skewers with cherry tomatoes cut in half, “as shown.” By now, even I am wishing I would run out of smoked duck. We still have enough to make a pizza later.

These things can take all day and even overnight to finish. In the real world, we didn’t get all day to play with them. There is pressure to produce in all departments, and it’s amazing how fast the skilled can crank this stuff out. They never look like they’re hurrying. Without any stereotyping, lots of women, and lots of Asians. You cannot twitch. It’s not like the jock in the exhibition kitchen at your local steak house. These guys have some steady hands and cool heads. 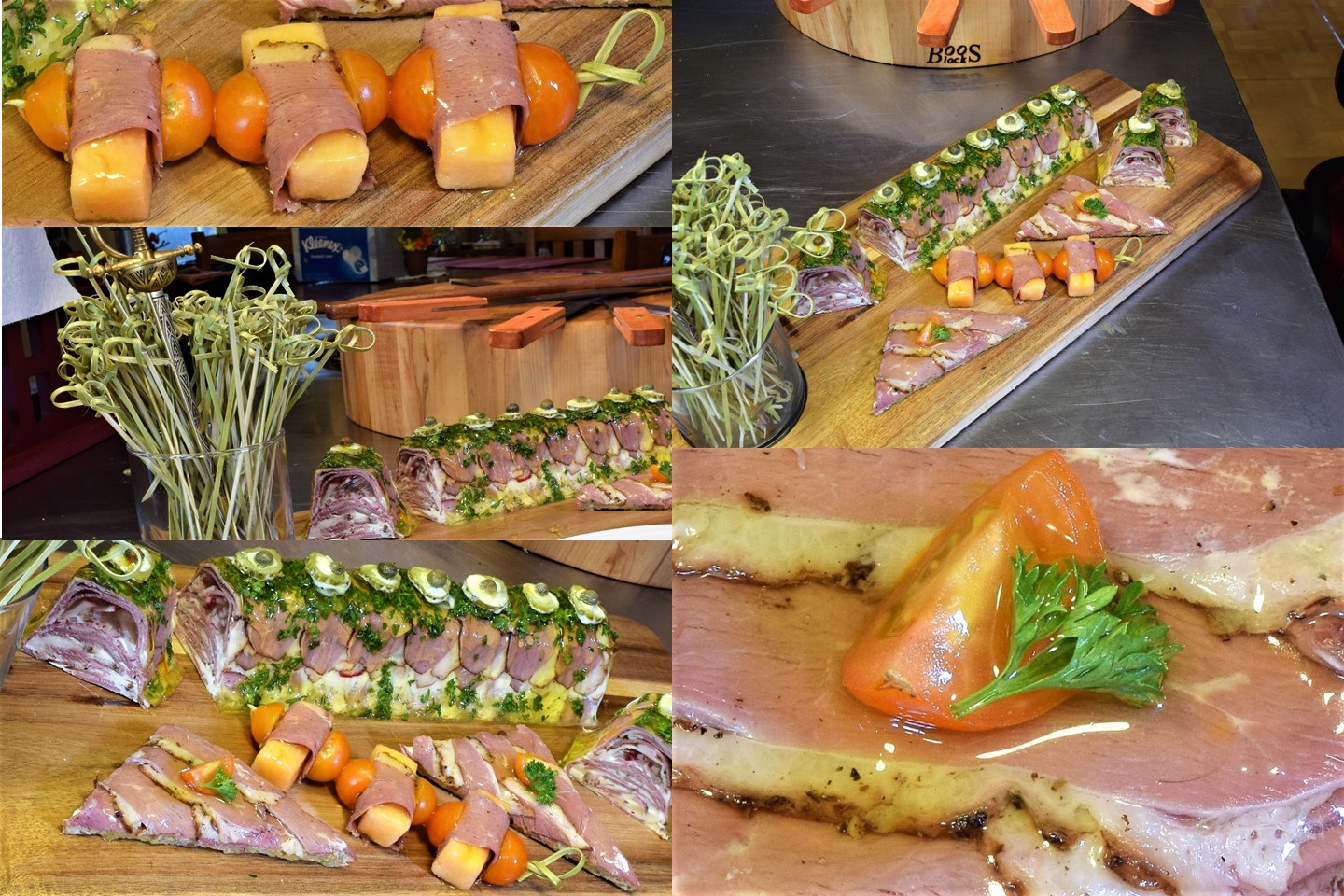 Still, I am satisfied somewhat with the ultimate result. The flavor is amazing, but at this point, I don’t really even care. Many people will say “WOW,” and others will say “EEWWW” or “what a waste of time.” In fact, I previewed a few pics in the FB GROUP, and that is exactly what happened, along with a gratuitous dig about me not being able to take the least bit of criticism.

I don’t mind criticism. I just don’t allow it. I didn’t make that up–I purloined it from a great chef that I worked for long ago. 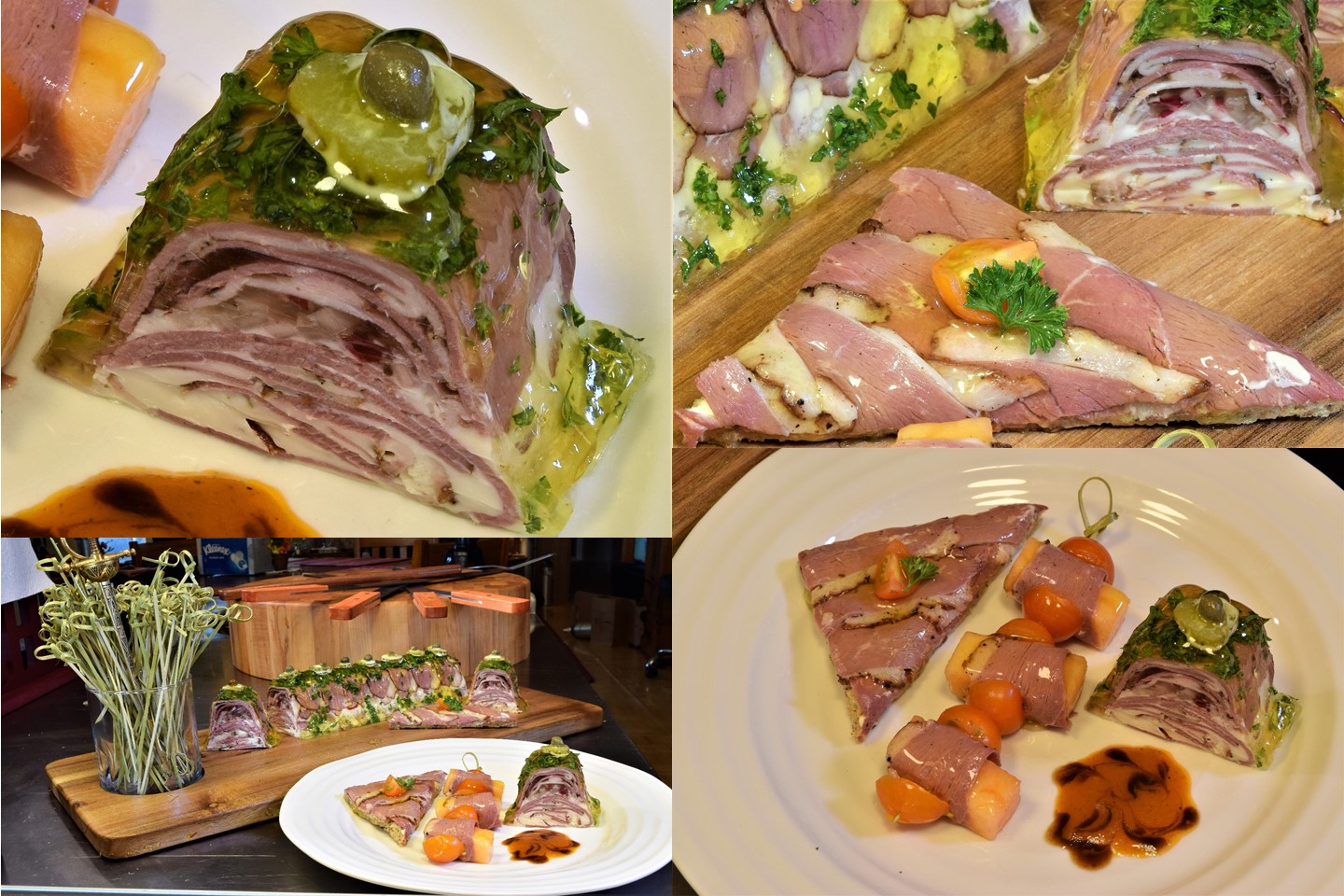 If this isn’t enough to discourage someone from volunteering for gardemanger, I don’t know what would be. Whenever people ask me why I don’t do more gardemanger work, I usually tell them “my sock drawer just isn’t that TIDY.”

I don’t know if Smokehouse Duck Pizza sounds difficult, but even if it does, you will see that it’s not.

Click HERE to go back to the root article:

The term gardemanger is ancient and its meaning has changed almost completely over the centuries. What was once a symbol of great power and prestige now usually refers to where entry level kitchen employees make salads, dressings, and desserts.
With that in mind, the late 19th and early 20th century Gardemanger departments were responsible for some of the most artistic and creative components of that era's cuisine.