The synergy of sous vide processing and hot smoking creates results unachievable by any other method.

Turkey breasts, 1 each, 3+ lbs/1.5+ Kg each.
Egg white, 1 each, mixed with 1 oz cold water.
One of our dedicated seasonings, linked HERE. (or your preference).
Vegetable oil, approximately 2 oz/60 ml. 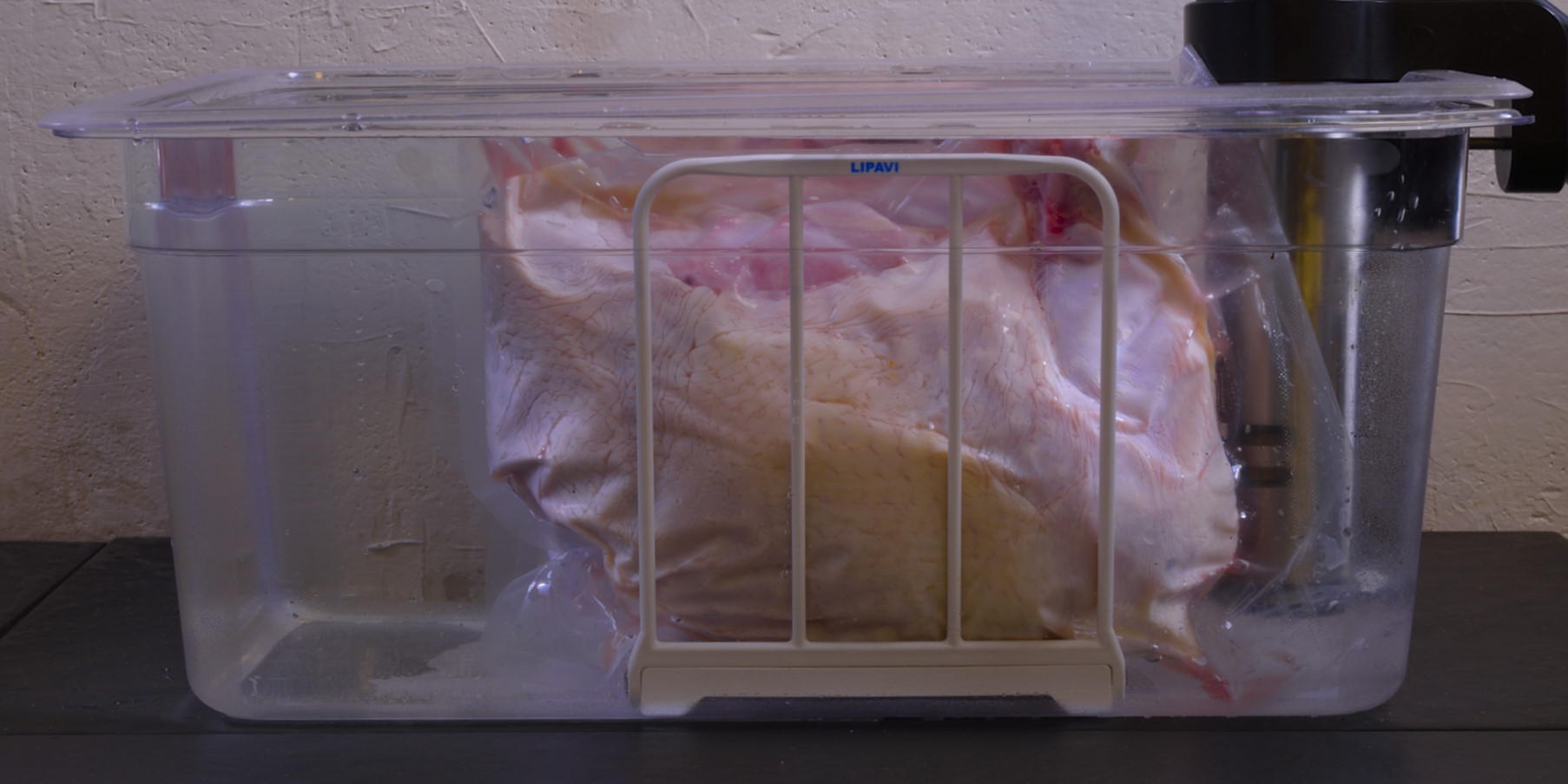 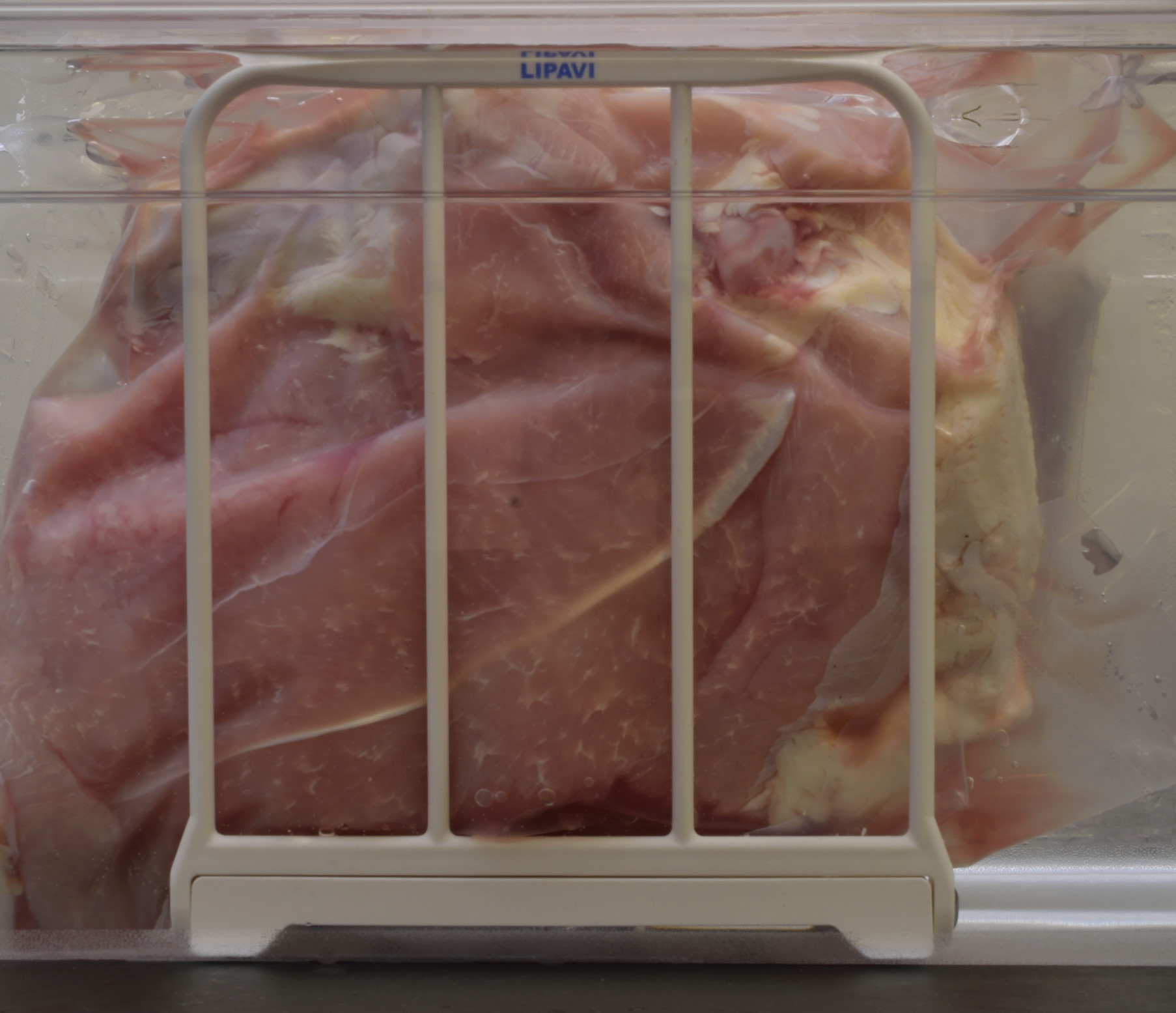 Preheat your sous vide bath to
135 F/57 C for a processing interval of 6 hours.

For a detailed explanation of how to remove the bones from a raw turkey breast, visit HERE. To make turkey gravy from the bones visit HERE.

Cold shock the sealed package in iced water until it achieves 70 F/21 C. Refrigerate at 40 F/4 C. As long as the seal is not broken, the turkey can remain in this state in the refrigerator for at least two weeks.

For best results, preheat your smoker to approximately 180 F/82 C. The higher the temperature, the greater the eventual loss of moisture. 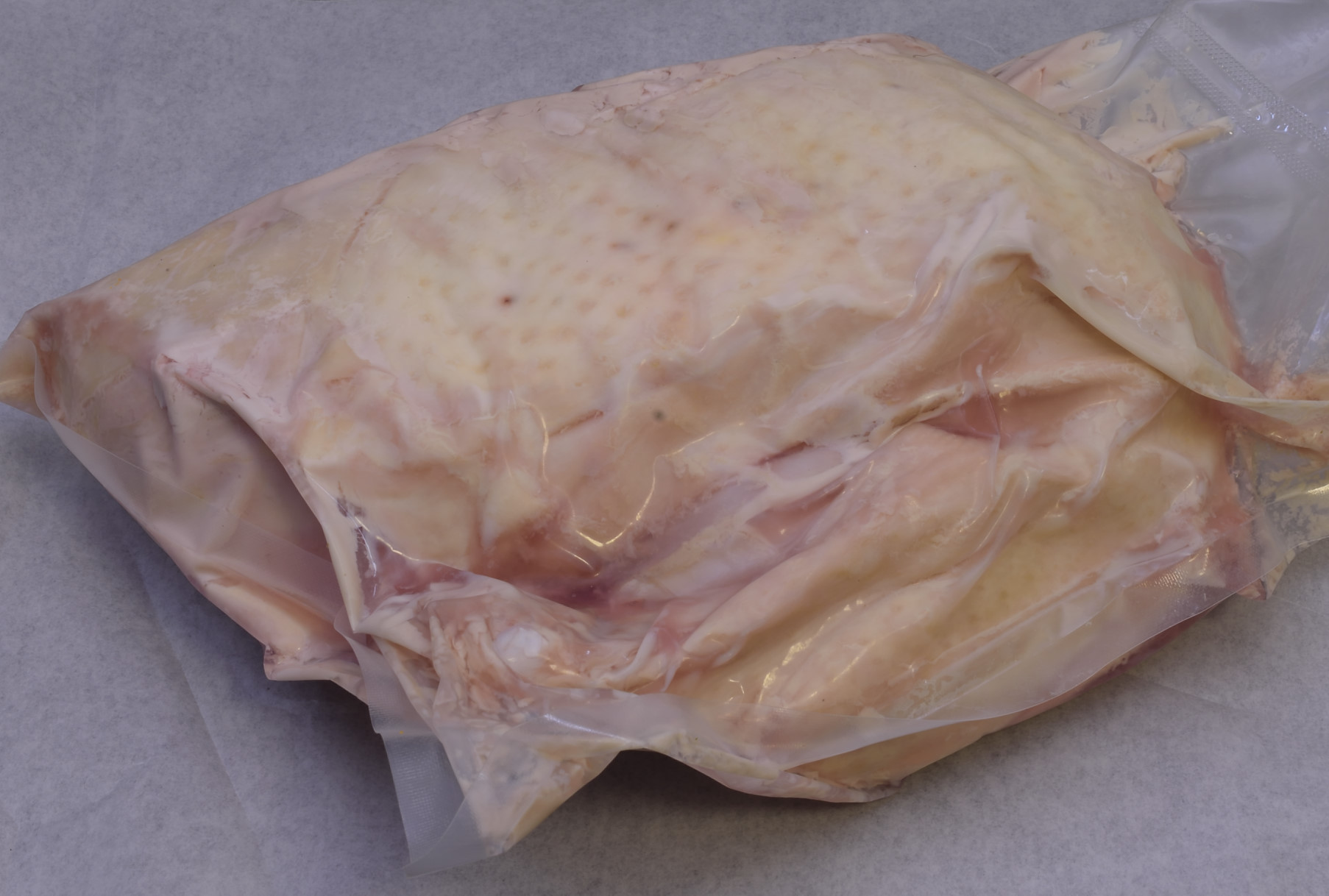 Remove the turkey breast from the bag and harvest the juices. 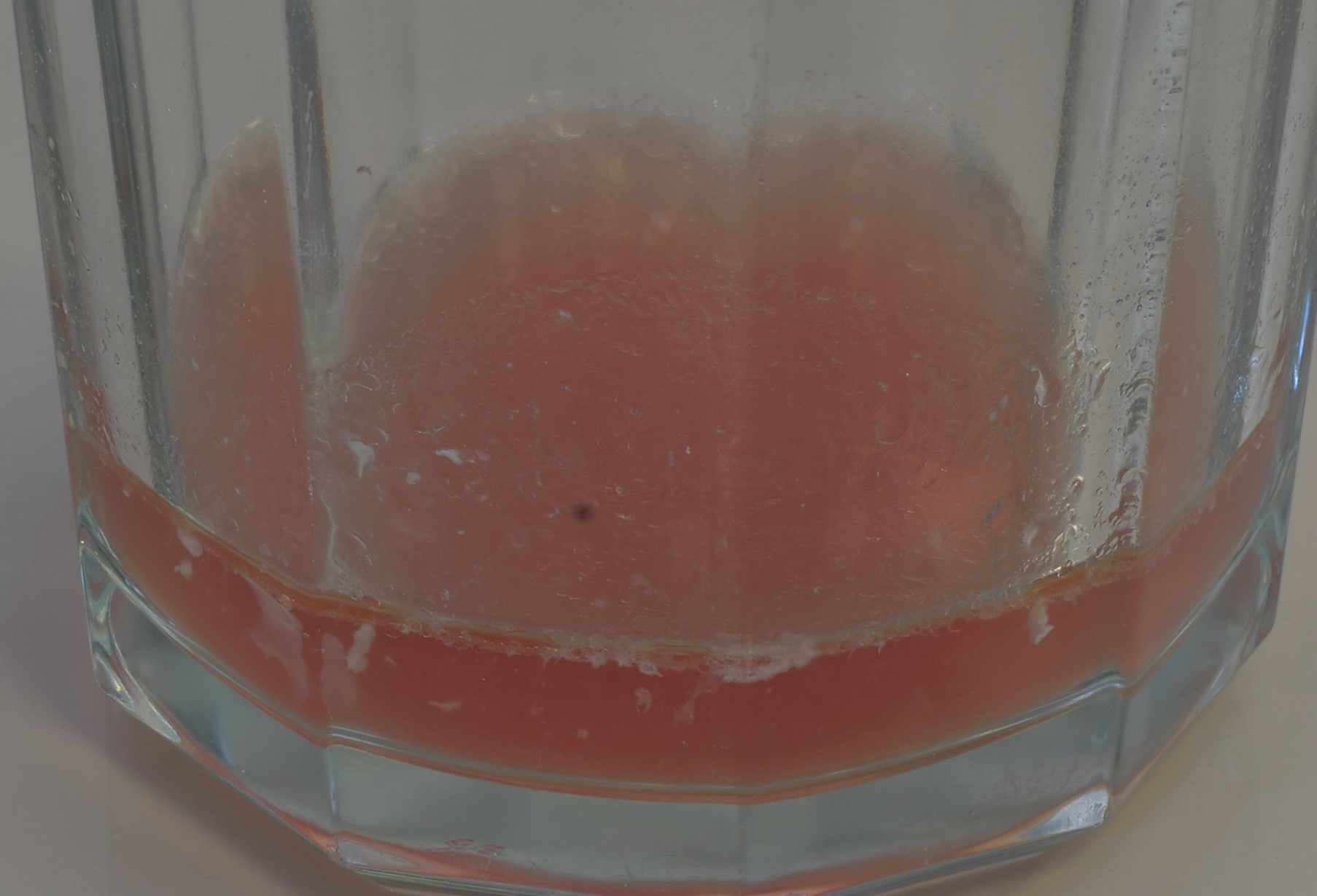 Set the juices aside for clarification as explained HERE. Cooking a turkey breast by any other conventional means will result in a weight loss of at least 25%. This is barely 4 oz coming from a 4 lb breast. 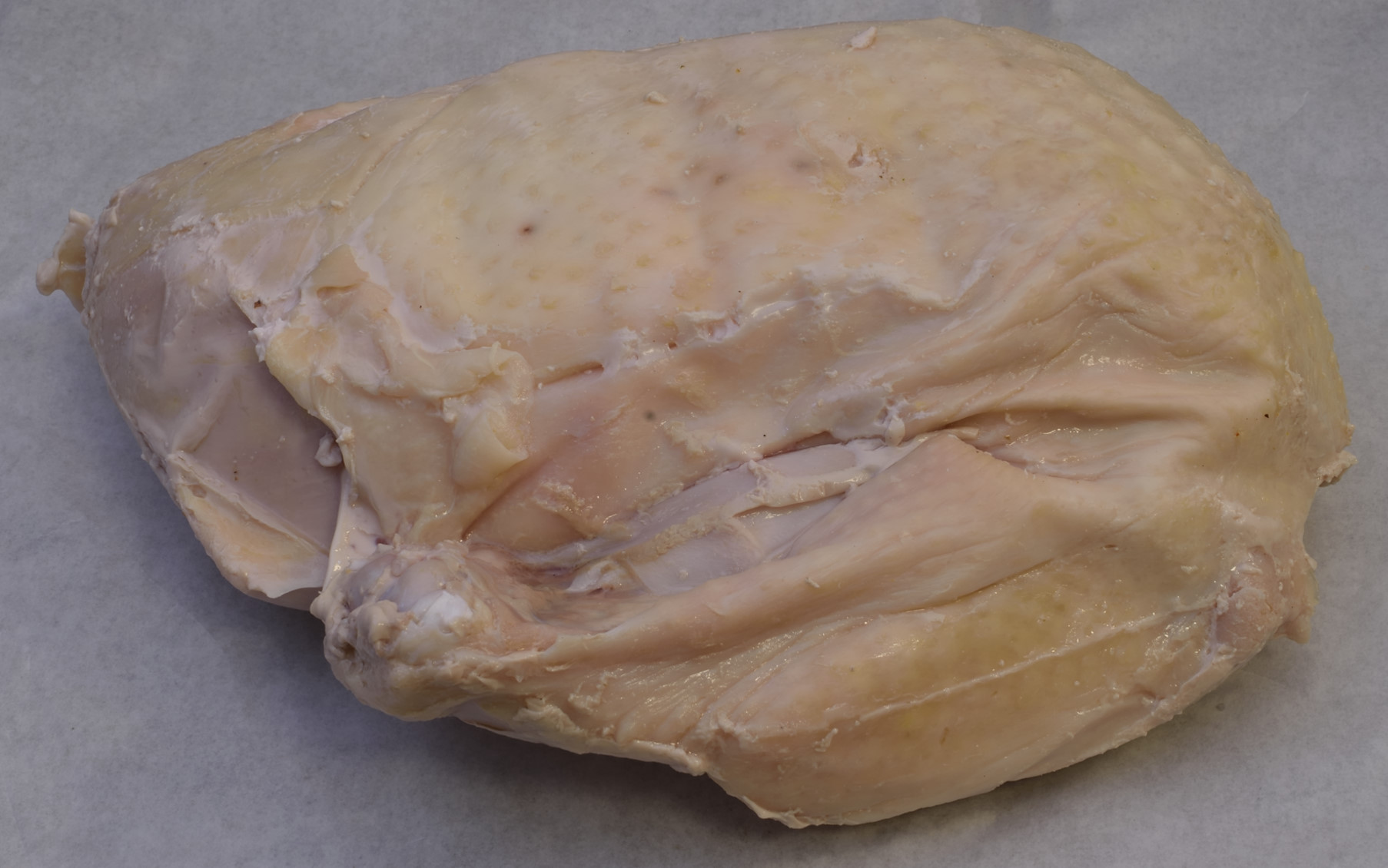 Pat the surface dry with a clean towel (or a paper towel). 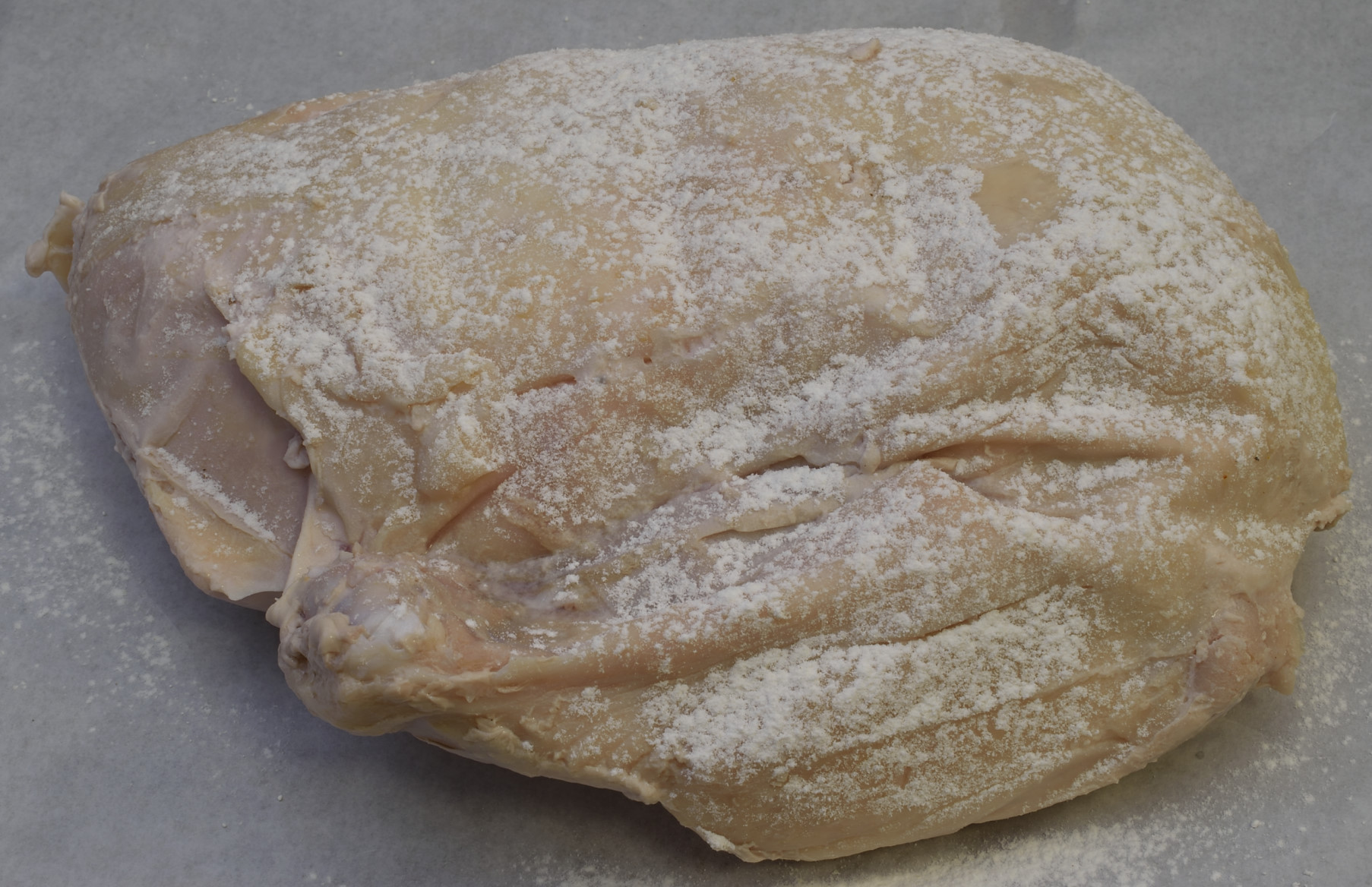 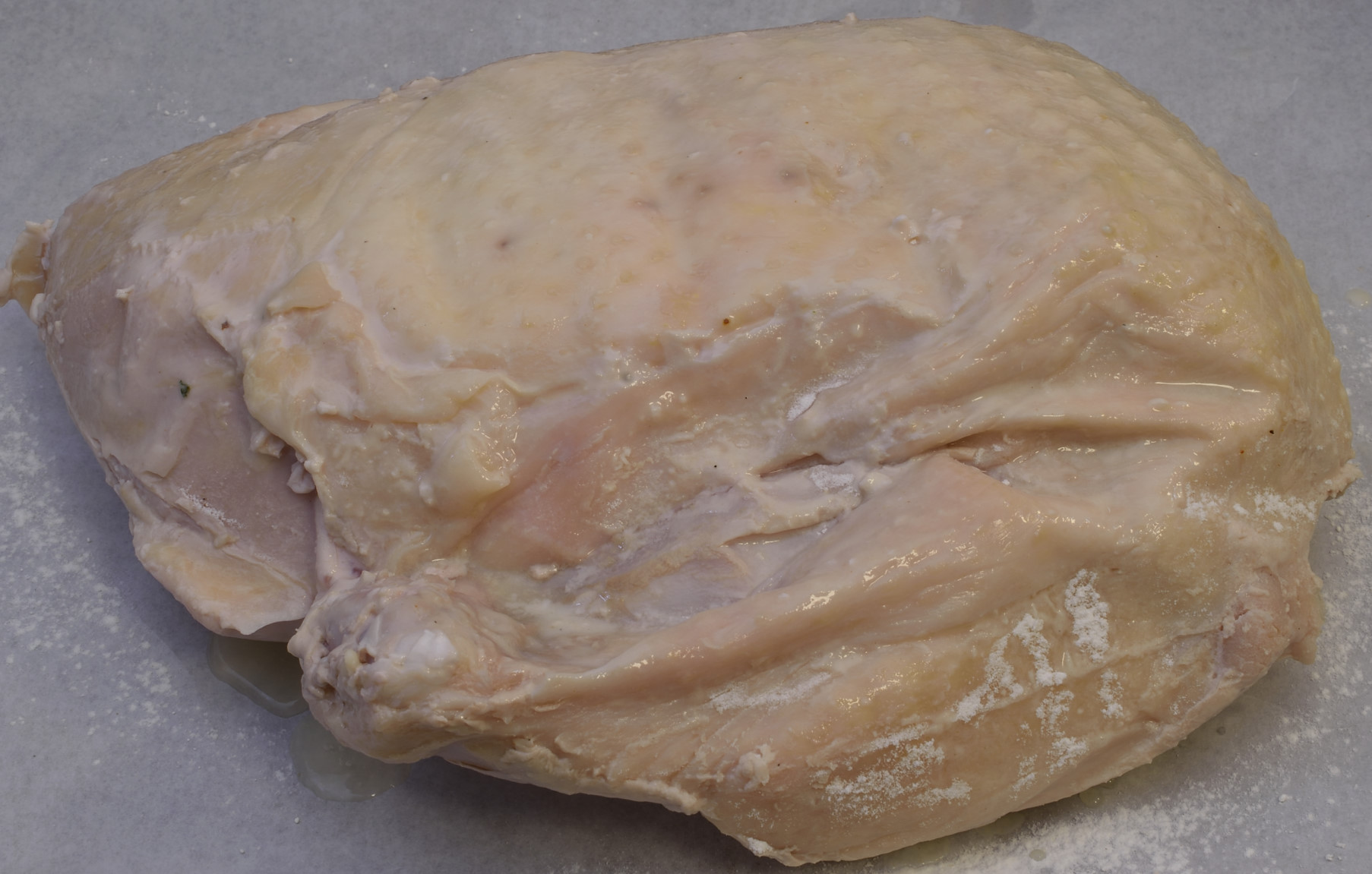 Moisten the surface with the egg white solution. 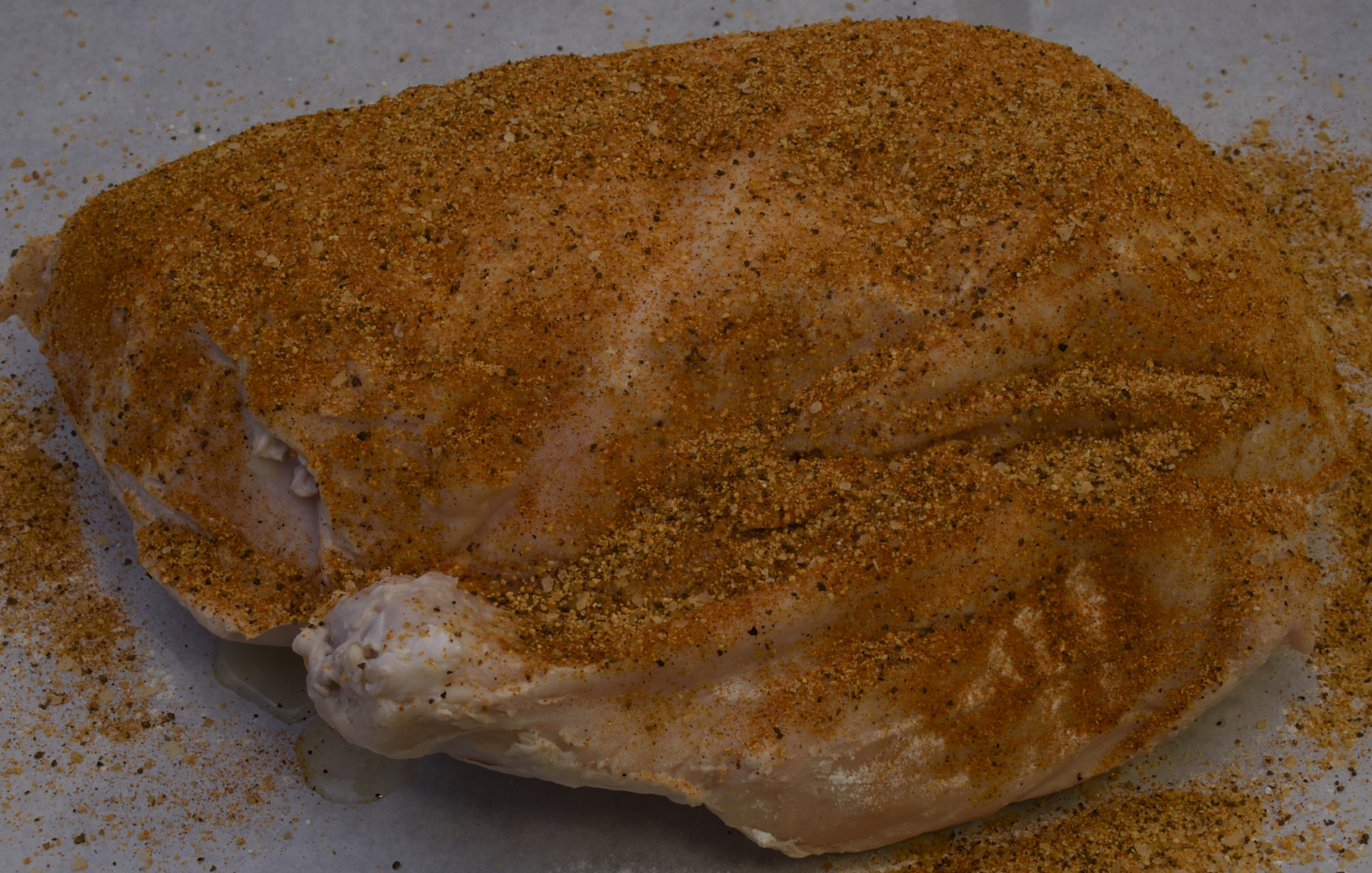 Sprinkle generously with the rub/seasonings. 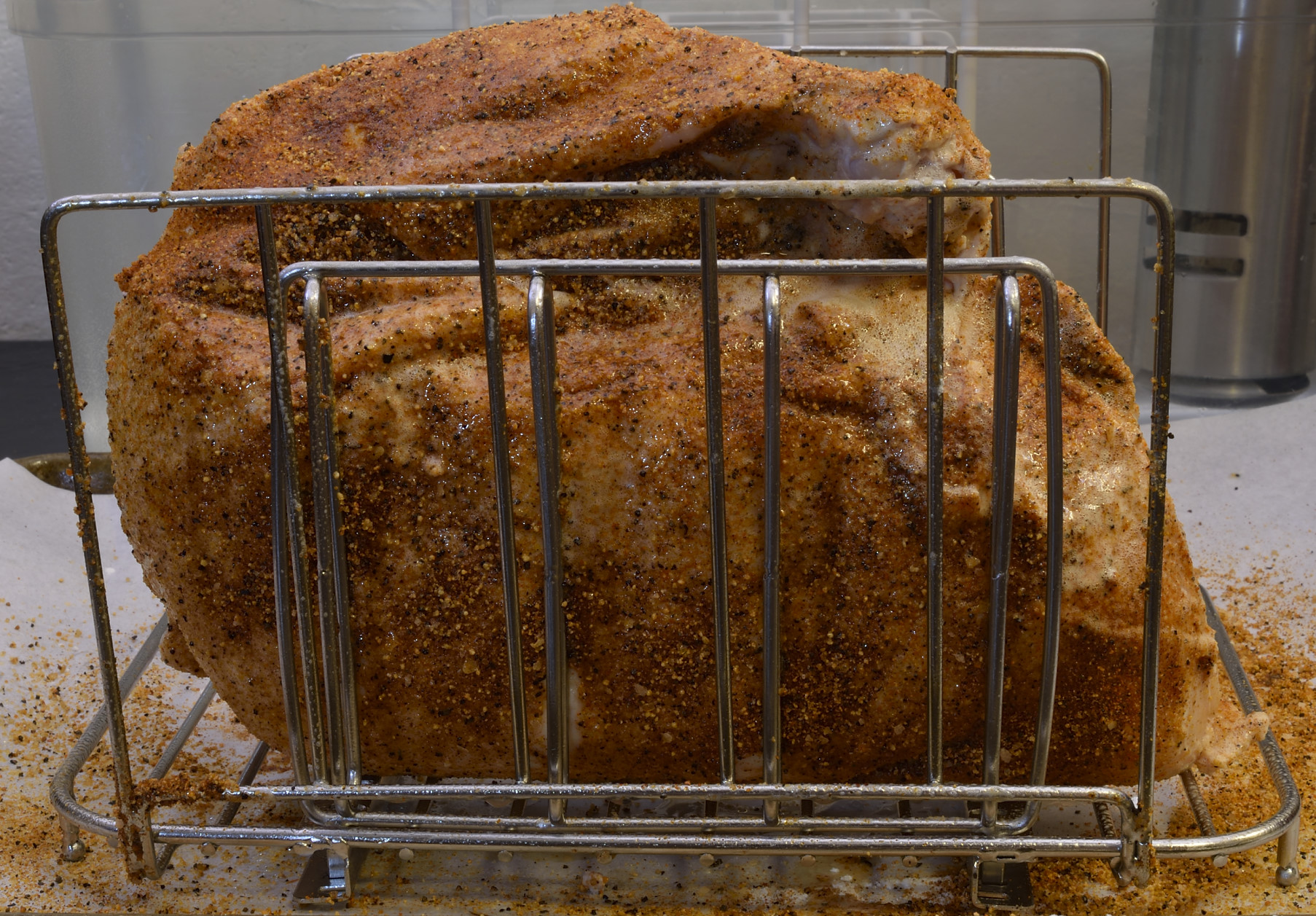 Stage the breast upright into the rack. 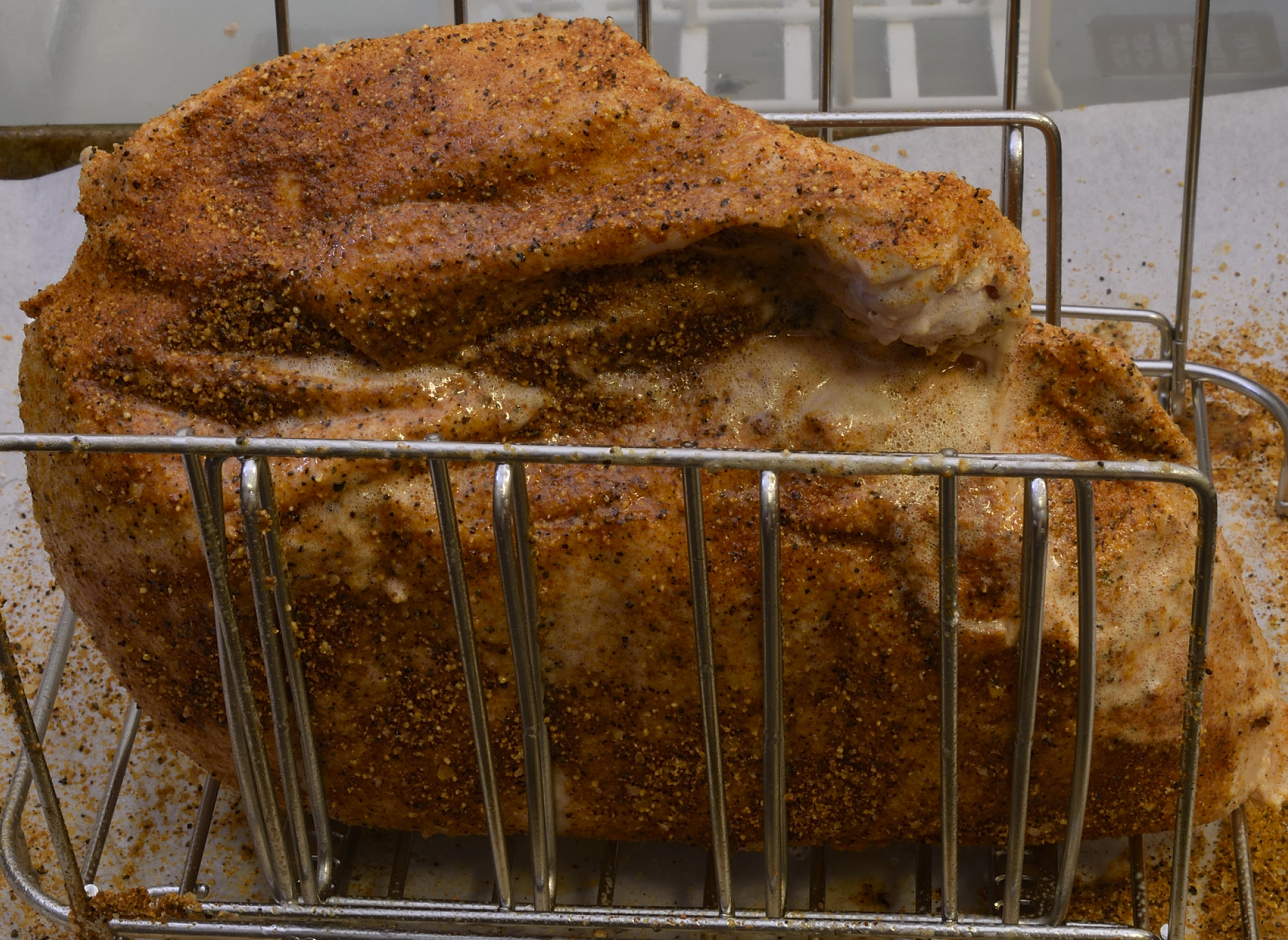 Carefully tilt the rack forward until it rests on its side. Apply the flour, egg white solution and seasoning on to the other side (optional). Drizzle or spray with a fine coating of oil.

Transport the turkey (in the rack) into the smoker (or oven). Smoke for 3-4 hours until a minimal internal temperature of 125 F/52 C is achieved. 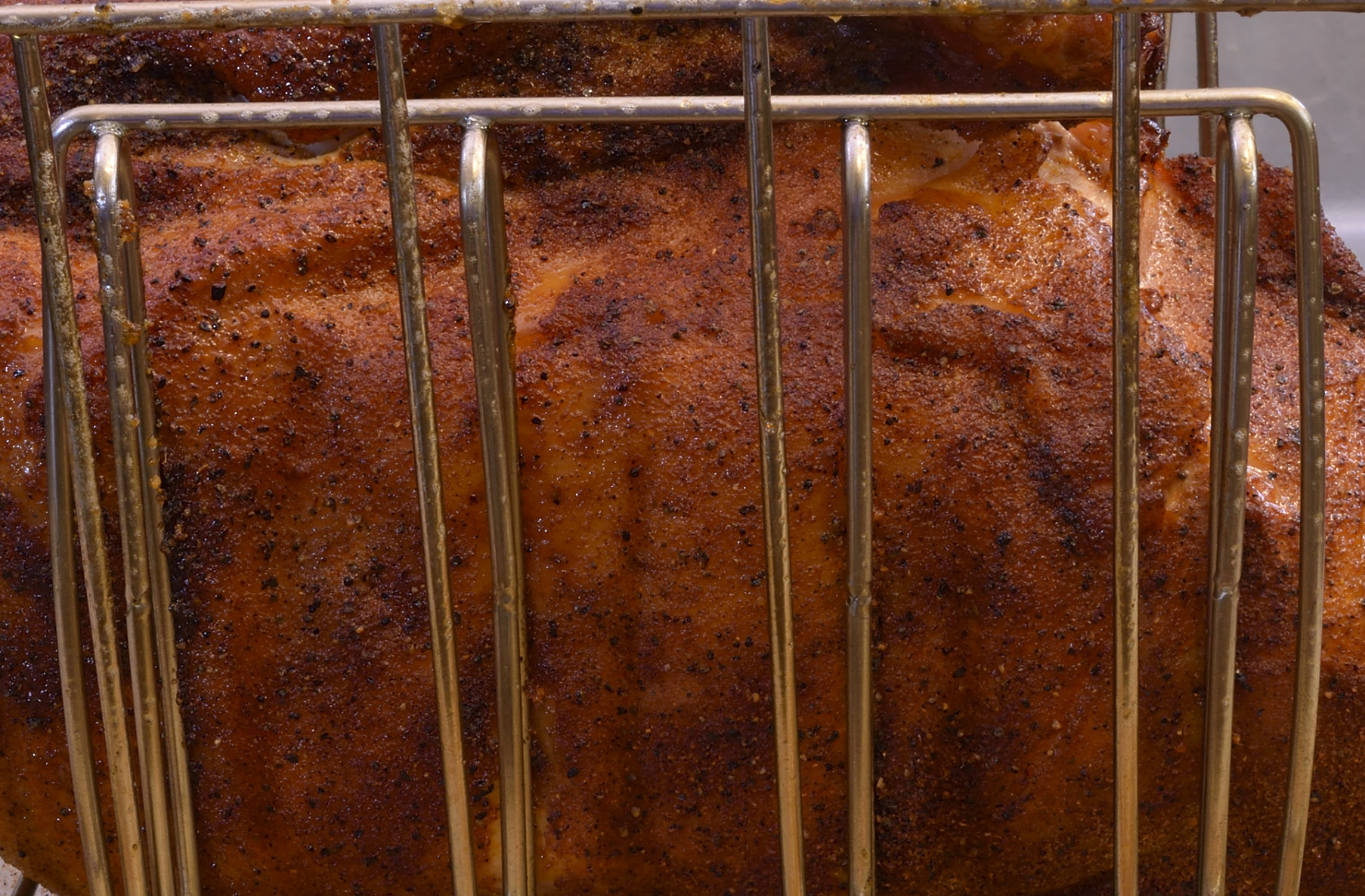 Since the turkey is already pasteurized safe, the practitioner has the freedom of mostly concerning his or herself with achieving the desired appearance. 125 F/53 C is generally considered to be “mouth hot.” 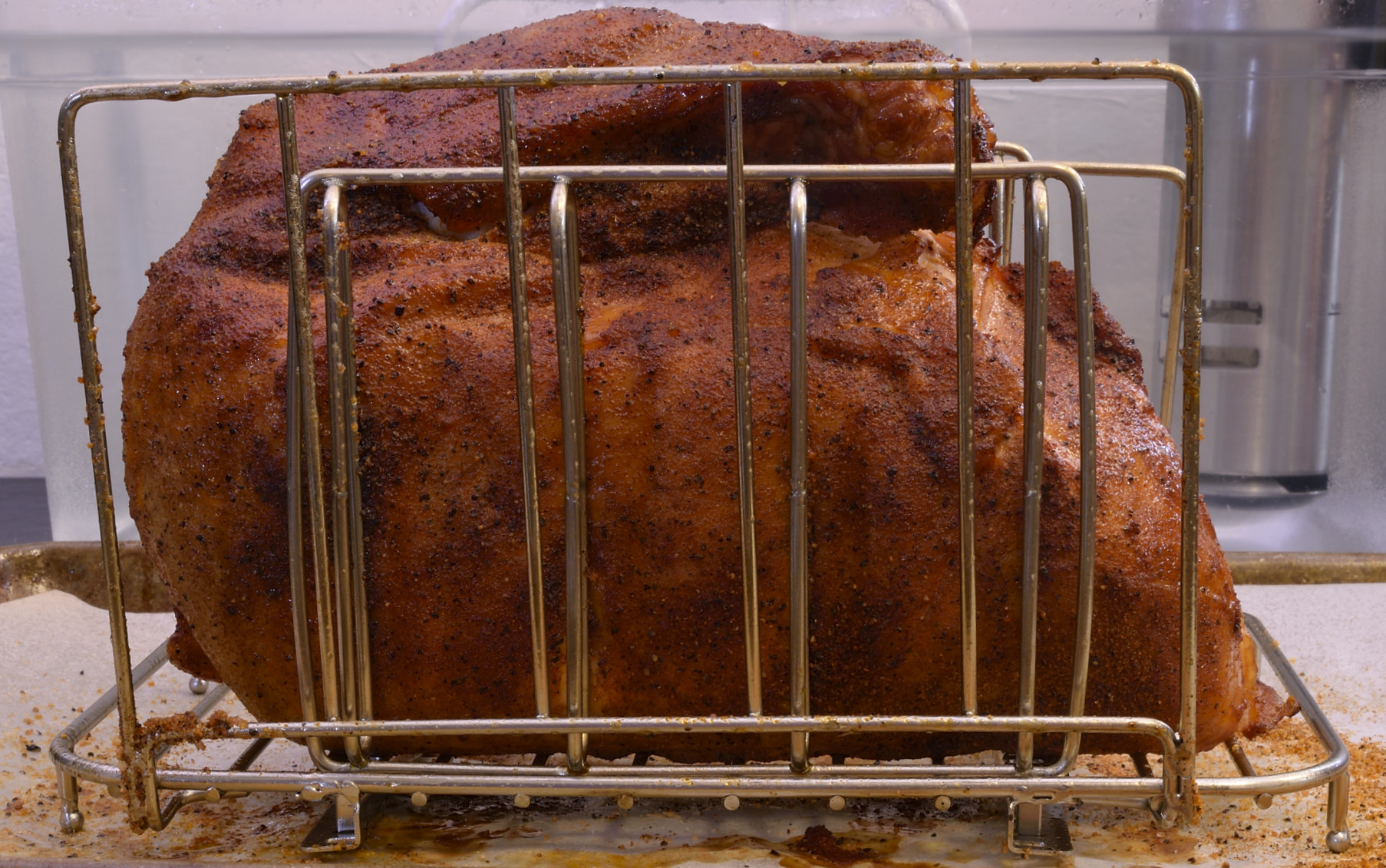 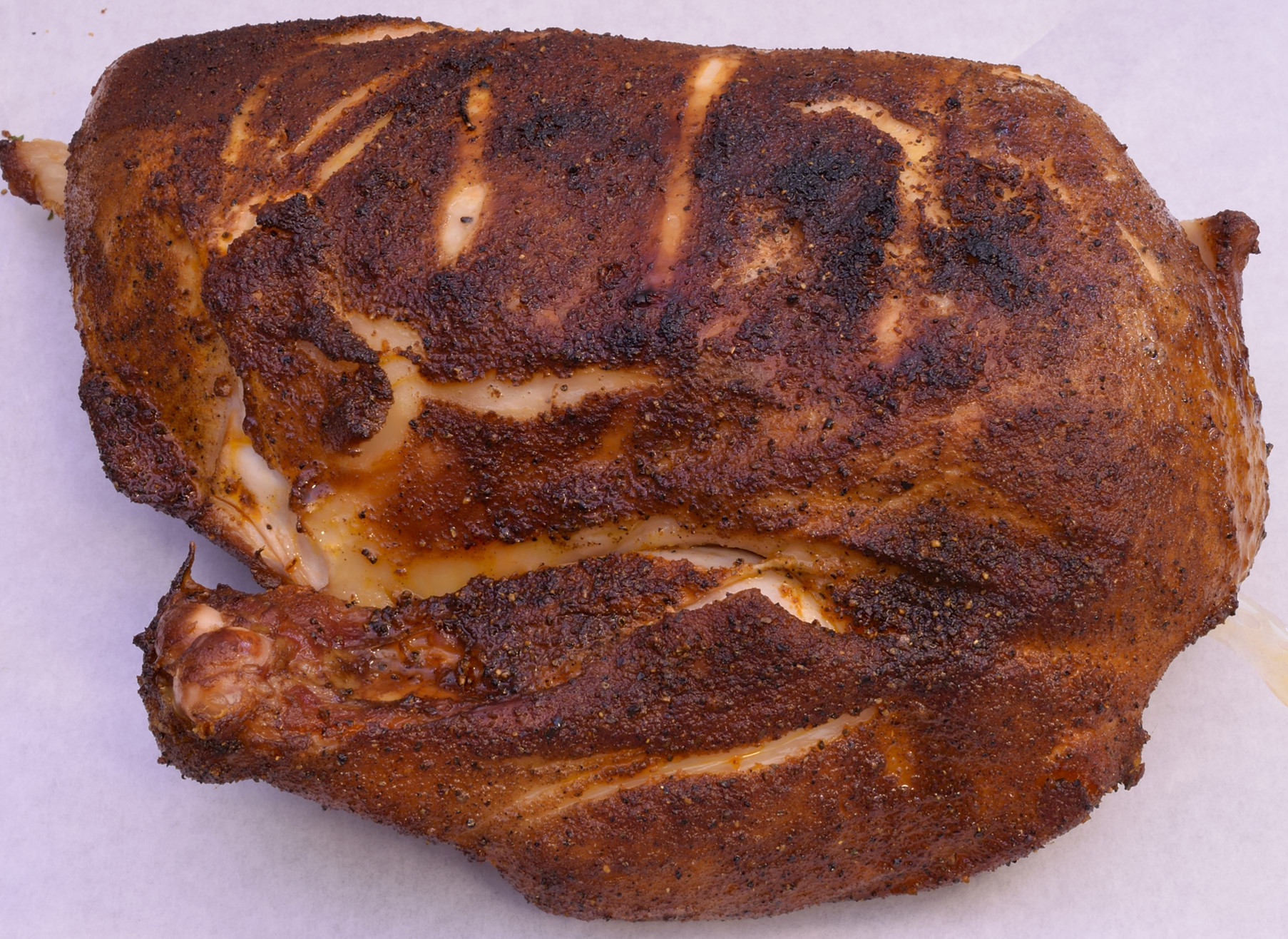 After smoking, the skin side of the turkey can be “crisped” by using a kitchen oven preheated on the “broil” function. Care must be taken not to scorch. From a pitmaster’s view point, the benefit is minimal. 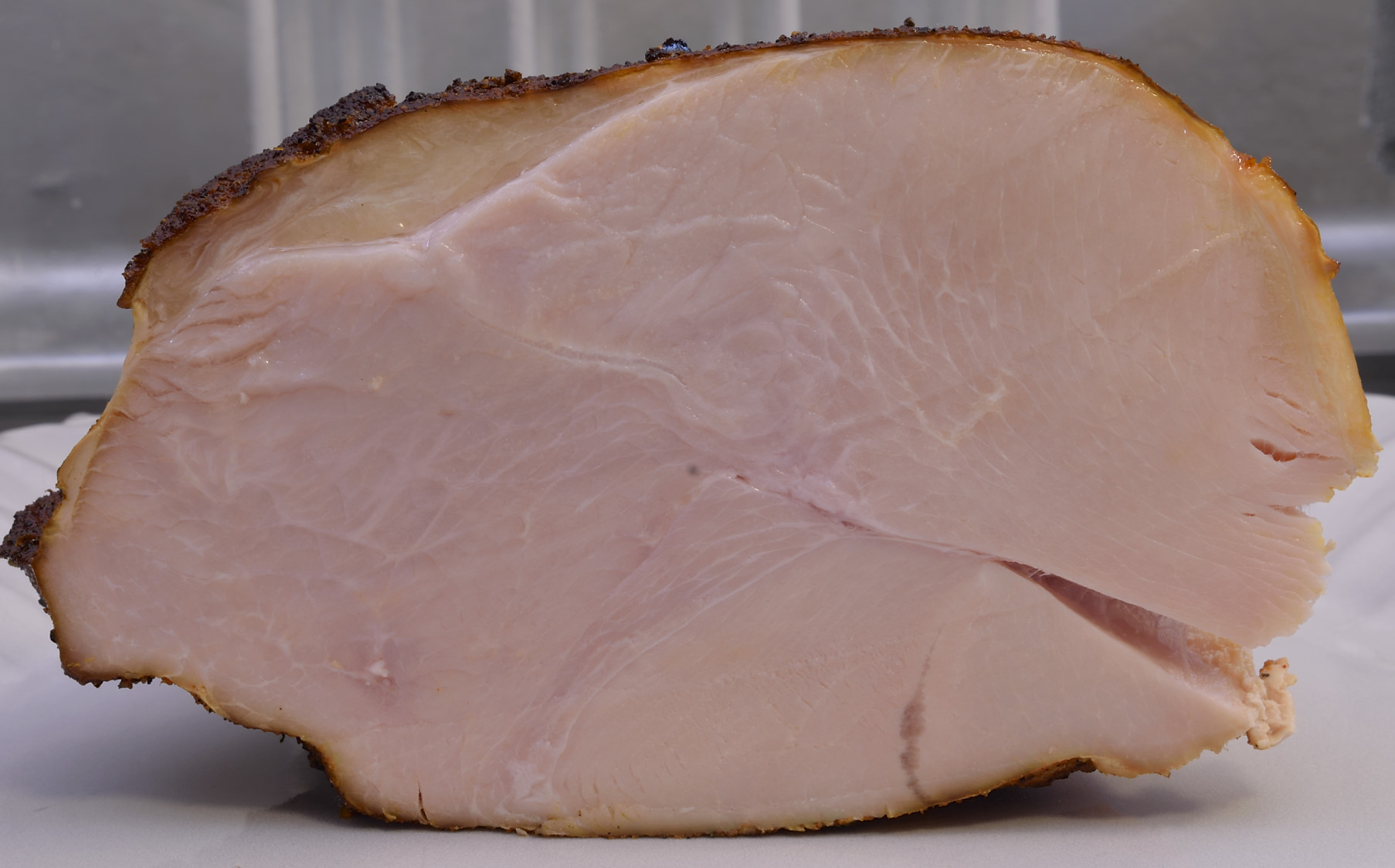 While many home smoked foods can take on a very dark appearance, the incorporation of a certain amount of steam in “low and slow” cooking trades crispness for “juiciness.” 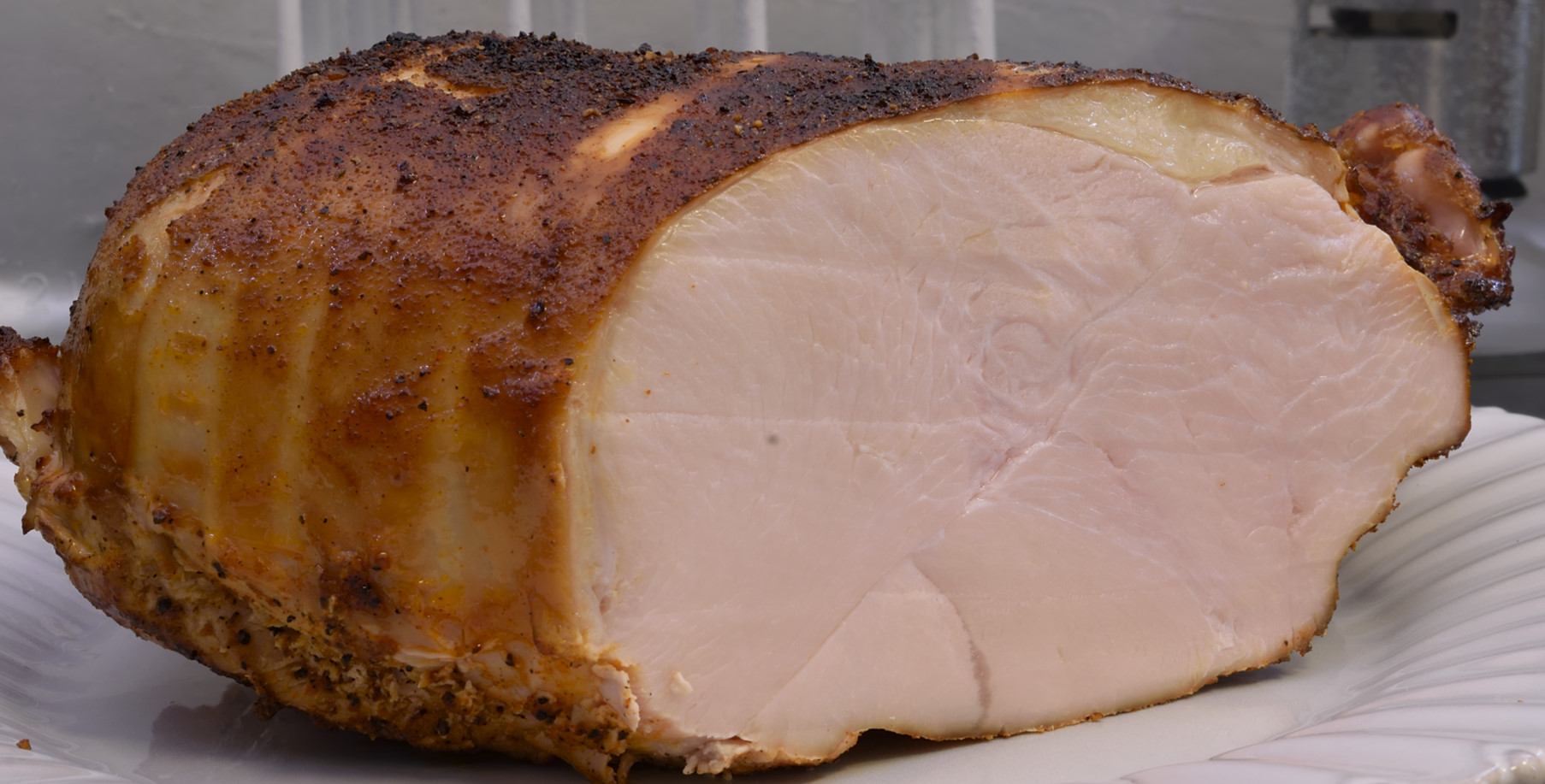 Ultimately, the choice is left up to the enthusiast.

Sous vide processing, pasteurization and preservation can be done long in advance when the intention is to shock cold and refrigerate until the day of service. Home BBQ aficionados always aspire that the food be ready at the same exact moment as the guests. This ideal is fraught with challenge.

Sous vide makes this burdensome task almost “beer proof.” If you are not ready to serve at that precise instant when your turkey comes out of the smoker, you need no longer fear the swift onset of cold and/or dried out meat. The smoked turkey can be re-vacuumed and held at 128 F/53 C for up to four hours (or even longer) if that is necessary.

Although it is difficult to stop moisture loss entirely, at this low temperature it slows to a virtual crawl. Whatever moisture is ultimately released by the roast can be harvested from the bag and utilized. In traditional holding models, this is almost always lost to evaporation. 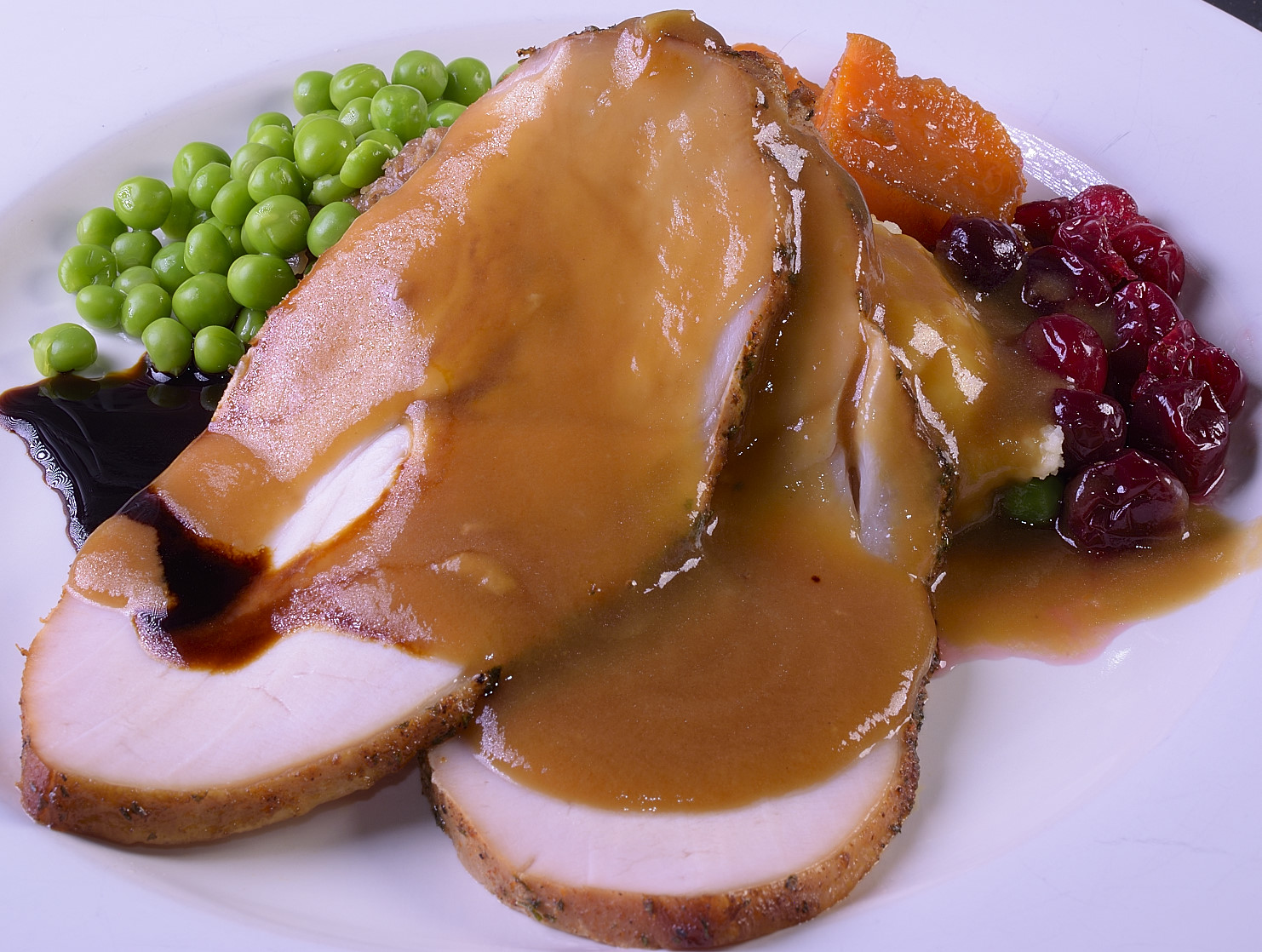 Sliced thin, the turkey can be incorporated into the ever growing list of popular sandwiches and wraps. This can be done before or after the searing process, as is your preference. Although the deli versions of sous vide turkey usually include the un-seared skin, it is easily peeled off before slicing as preferred. 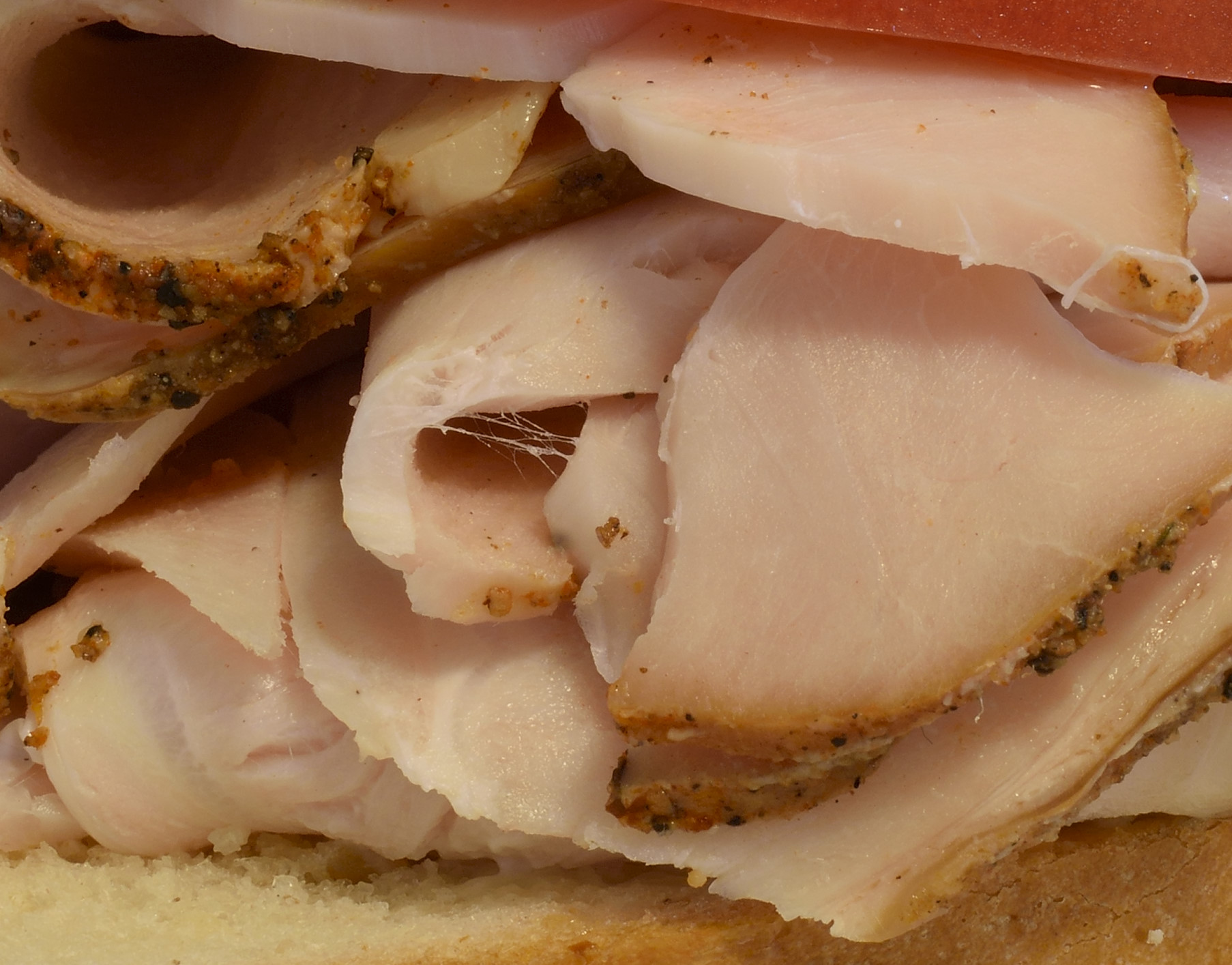 The benefits of turkey processed utilizing sous vide technology are enhanced even further by smoking the processed breast. Not only is shelf life greatly extended after the initial processing, the subsequent exposure to "hot" smoke creates an amazing color and flavor. Moisture is preserved better than by any other method.

Even though Americans associate turkey with the Thanksgiving holiday, turkey sold from delis at exaggerated prices reign supreme year round in overall sales and popularity. Now the home practitioner can abandon his/her dependence on the neighborhood market for perfectly prepared sliced turkey, hot or cold.