Since filets, rib eyes and New York strips are inherently tender, sous vide preparation of these cuts is prompt and almost effortless. 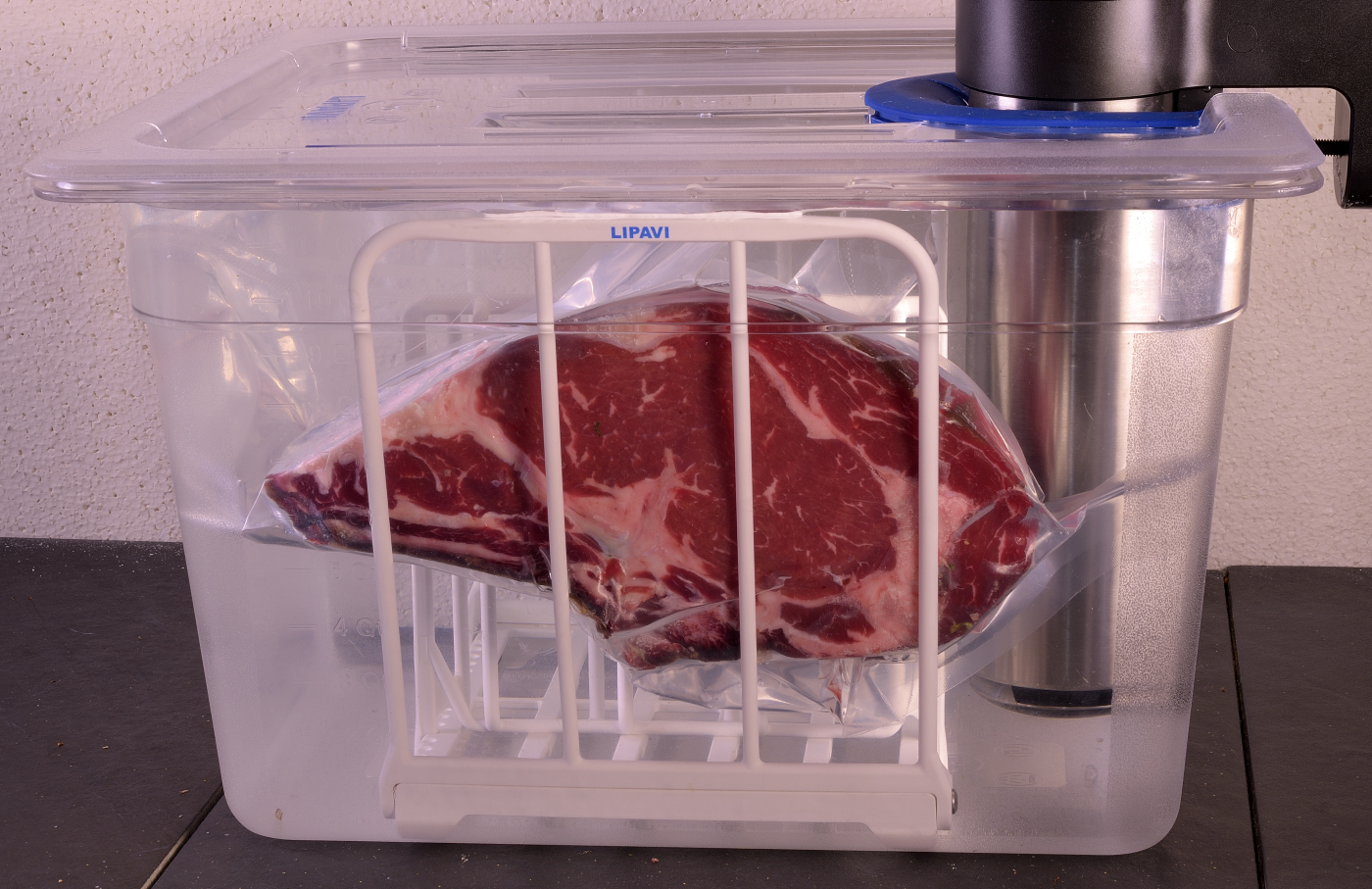 Beef tenderloin. (psoas major)
This long, tapering cylindrical muscle is part of the hind quarter and runs parallel to the New York strip loin. It is the most tender of all the steaks. The New York is on the outside (skin side) of the short loin. The tenderloin/filet is on the inside, adjacent to and protective of the kidneys. 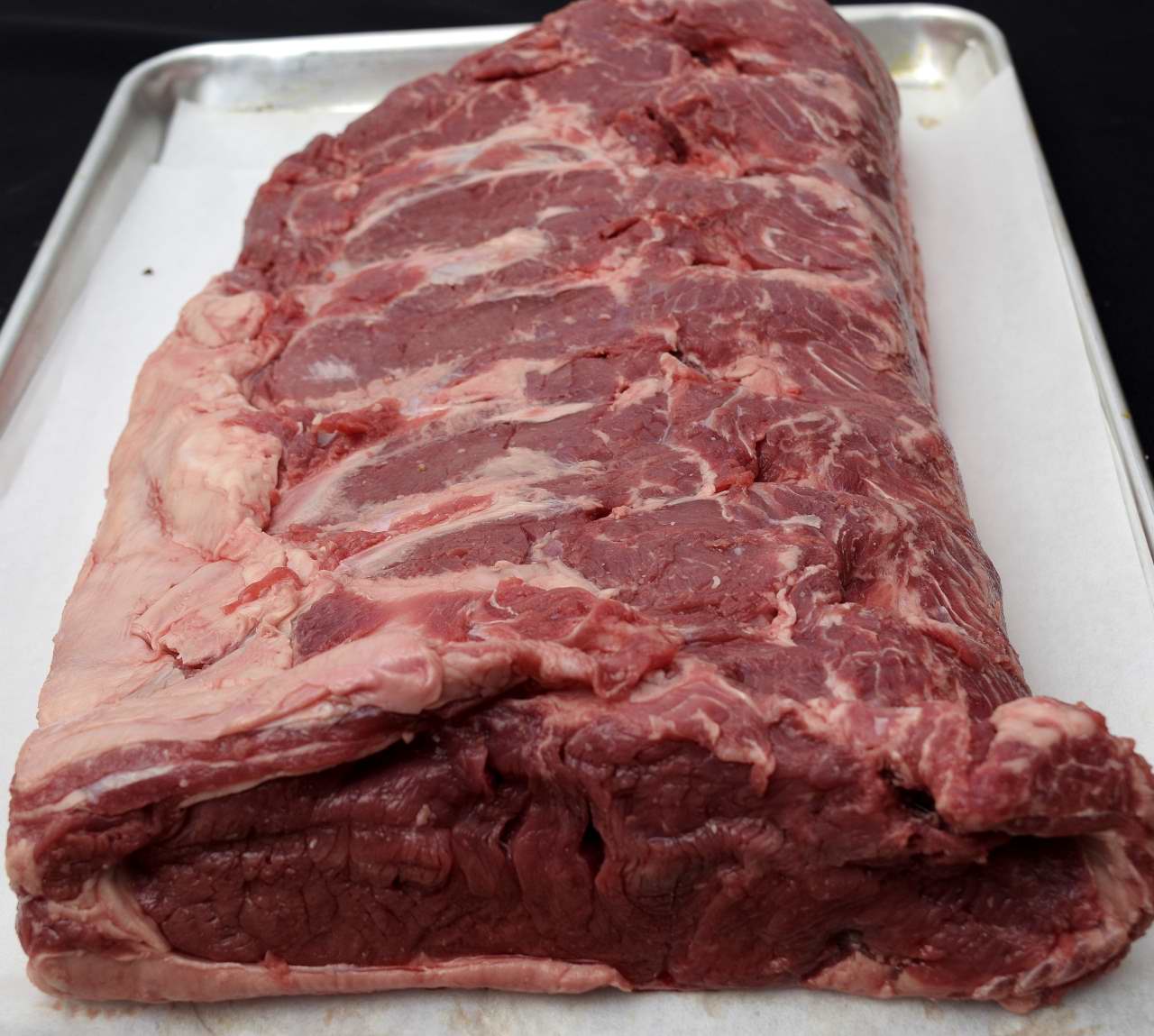 Beef rib eye. ( longissimus dorsi, complexus and spinalis)
This muscle is an extension of the same muscle of which the strip loin is composed, or vice versa depending on your view point. The rib eye section begins just behind the shoulder and proceeds to about half way down the spine. It connects to the front seven bones of the rib cage. It then becomes the New York strip and proceeds to the rump of the animal. When still connected to the rib bones, a roast composed of the entire muscle is commonly referred to as “prime rib.”

There is no consensus as to the exact definition of “rare,” “medium rare,” “a point,” etc. A little practice will help you learn just exactly what temperature achieves your preferred appearance of doneness.

Set the sous vide bath to the temperature from the table above that most closely matches your preference. Stage each steak into a its own vacuum bag. Seal and sous vide process at the chosen temperature for a minimum of two hours. As per your convenience, the steaks can stay in the bath for at least two more hours without risking any detectable difference in quality or safety. Because of the precise characteristics of sous vide, and if service is delayed for one reason or another, the steaks can even stay in the bath up to eight more hours–or even longer. Eventually there will be some dissipation of the red coloring associated with rare beef. If you want to process several steaks to different degrees of apparent doneness, visit HERE.

Note: For enthusiasts who like their steaks extremely rare, they can be processed at temperatures as low as 122F /50 C. In this case the processing time MUST be limited to TWO HOURS in order to meet USDA standards of food safety. The steaks should then be seared and consumed immediately, just as one would if sous vide were not being utilized.

Once your steak(s) are processed, let them rest at room temperature for up to 15 minutes. This is referred to as “counter shocking.” It allows the surface to cool somewhat, which in turn prevents the searing process from elevating the internal temperature beyond the original target temperature. This time can be spent putting the finishing touches on the other components of your meal. Then, you can season, sear and serve.

Other than salt, no flavorings can penetrate the tangled matrix of protein chains of which meat is composed. Although salt can penetrate the surface of the meat, it does so over the course of days, not hours. The application of heat does not accelerate the process. For this reason, there is no need to add any seasonings to the sous vide pouch during processing. For more information on the science related to this issue, visit HERE.

Once sous vide processing is completed, 2 measured teaspoons or LESS per pound (450 g) of meat is sufficient to satisfy most people’s preferences. Most chefs apply ground black pepper to steaks at the rate of approximately 10-15% of the volume of the salt applied.

Albumin proteins are common in meat. They are very similar to egg whites and create a stickiness to the surface of raw meats. Sous vide processing removes these albumin proteins from the surface as a natural function. Powdered egg white can be used to renew the sticky surface. Dust lightly and then mist with water to create the cling. Be careful not to overdo it!

Whenever searing, make sure you have your stove’s hood fan turned on and even a draft window open. It is better to do this before than after you realize that smoke is accumulating in your work area.

Along with counter shocking, steps can be taken to prevent the searing process from elevating the internal temperature beyond your preferred degree of doneness:

The THINNER and lighter the steak, the HIGHER the searing temperature should be. Steaks that are 1″/3 cm or less should be seared no lower than 450 F/232 C, and for no longer than 20 seconds on each side. It is worth the $20 investment in an infrared thermometer to measure the surface temperature of your pan. Infrared thermometers are also very useful for confirming the temperature in your refrigerator, oven, and even the barbecue.

The THICKER the steak, the lower the searing temperature is required. Between 1″/3 cm and 3″/9 cm, 375 F/190 C for approximately 30 seconds per side is usually sufficient. At thicknesses above 3″/9 cm, and depending on your preference, a surface temperature of 300 F/150 C for no more than a minute on each side may be sufficient. Many enthusiasts take great pride in generating much higher temperatures for searing, which, again, is a matter of preference. Remember that hot surface is more effective and efficient than an open flame..

Not all rib eye steaks are created equal. This pictorial differentiates the cuts.

Cooking steaks by traditional means requires the simultaneous creation of a tasty crust on the outside and a prescribed degree of apparent doneness on the inside. This can be difficult for novices and pros alike.

Sous vide processing separates and simplifies the two processes.
First, a precise and simple method using sous vide that achieves the desired degree of doneness every time. Then, we will reveal an equally simple technique that creates the perfect level of crispy caramelization in two minutes or less.