No longer do we need to "cook it to death" when we embark on our journey to Beef Brisketville. Sous vide renders this tough cut tender.

Parsley, fresh chopped, one bunch (or dry as needed).

There is no easy way

A whole beef brisket is a cumbersome, awkward Lamborghini shaped slab of meat. It likes nothing more than to slither off the cutting board and park itself on the floor. You can’t even pick it up with one hand, it’s just too droopy. On the bright side, whole briskets can be had for about $3/lb. If you buy a piece out of the butcher’s case, you will have to cough up more like $8/lb.

Why? The fat and trim on a brisket can weigh almost as much as the meat itself. It is always better to leave fat on the meat than to leave meat on the fat. That is a difficult proposition when it comes to brisket. The meat is fatty, but the fat also seems kind of meaty. I grind this trim and slowly render all the fat out in a pan or oven. Once well drained, the end result is suitable for tacos or even the occasional Sloppy Joe. Who comes up with these names?

A beef brisket CAN be processed whole, to accommodate large parties and back yard barbecues. For details on how to do this, click the link HERE. The great thing about reducing the size of the packages is pasteurization/preservation. As long as the seal is not broken, the pasteurized protein will benefit from a greatly extended shelf life in a 40 F/4 C refrigerator. Once the seal is broken, the product should be consumed within a week.

The more room you have and the more organized you get, the easier the brisket is to break apart into manageable pieces. Pitmasters gasp at the prospect of cooking briskets any way other than whole. The science says it doesn’t really matter except that cutting the brisket up increases the total surface area somewhat. Sure. Surface area affects moisture loss. Fortunately, the low temperatures used by sous vide reduce moisture loss to the absolute minimum. Any moisture released is trapped in the sealed pouch, and therefore easily retrieved and utilized.

Once you wrestle the brisket out of the cryovac packaging, you will realize you should have put a towel or two down on the table in advance. A 15 lb/7 Kg piece of meat can have a significant amount of liquid in the bag. That’s not blood, by the way. That is myoglobin dissolved in some water.

Vampires will be disappointed

Myoglobin is an oxygen transporting protein that occurs in muscle, but not in veins or arteries. It is related to hemoglobin, which also carries oxygen and contributes to the red color of blood. Animals must be completely exsanguinated to meet USDA specifications, and for good reason. Blood is extremely perishable. If there is blood left after slaughter, the meat will spoil almost immediately.

It’s a good idea to put a couple of towels down on the largest, steadiest cutting board/table that you have at your disposal. If you use a pointed knife to poke a few holes in the underside of the bag, most of that stained water will drain out onto the towel. Then you cut the bag lengthwise, pull it out from under the meat, and drop it directly into the garbage can that you so cleverly placed right there at the end of the table. The towels may follow it, but they are ready for the laundry anyway, just retrieve them and move forward. Little things eliminate the need to use an excessive number of expletives. Again, I speak from experience.

The ins and outs

The brisket consists of two muscles–the superficial pectoral (“point”) and and the deep pectoral (“flat”). We all know what “pecs” are but you won’t see any nipples on a brisket. Cows have udders, remember? They’re a little farther back. Steers don’t have udders, but I’m sure you get my point.

The right end of the brisket in the picture below is where the point muscle connects to the “chuck,” which is the generic name for the shoulder and neck region of a steer/heifer.

This brisket is from the “right” side of the animal, from the steer’s point of view. That slanted end on the left is where the brisket connects to the steer’s belly. You don’t see beef belly in the stores. It has even less meat than a pork belly. We pray that it becomes ground beef as opposed to some of the other things that butchers are accused of putting in our hamburger.

Bovine, porcine, ovine (lamb) and even human anatomy are almost exactly the same. However, you will never hear a human pectoral region called a “brisket,” and you will never hear a pork shoulder called a “chuck.” A beef “butt” is a roast from the rear end of the animal. A pork butt is from the FRONT end of the pig. Go figure. There must be someone to blame for the fact that the common name for a muscle on a pig is different than the common name for the same muscle on a cow. Somebody may even be trying to confuse us, but butchers are just using terminology that they inherited.

When you flip the brisket over, you will see that the flat muscle runs almost the full length of the cut. The coarse grain runs at a downward angle from the left to right. This is almost perpendicular to the grain of the point muscle. Carving a whole brisket is problematic because of this. Unless you hit those angles just right, slices from the adjacent muscles will have a layer of meat sliced properly against the grain, a large layer of fat, and then a layer of meat that will have been sliced improperly, WITH the grain. We will discuss this in greater detail in Part Two of the brisket tutorial series, linked HERE. 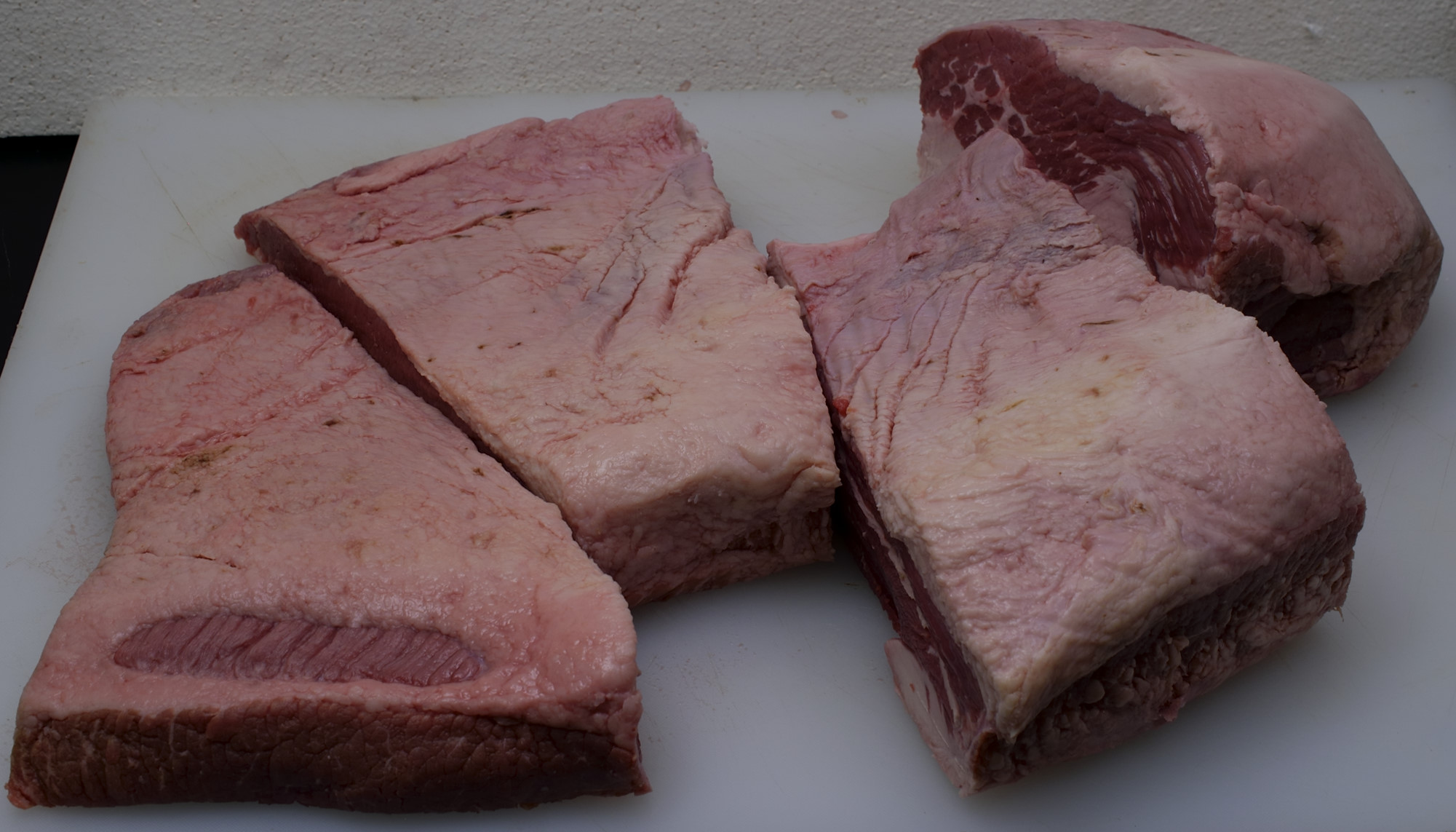 The brisket is divided into four sections/ 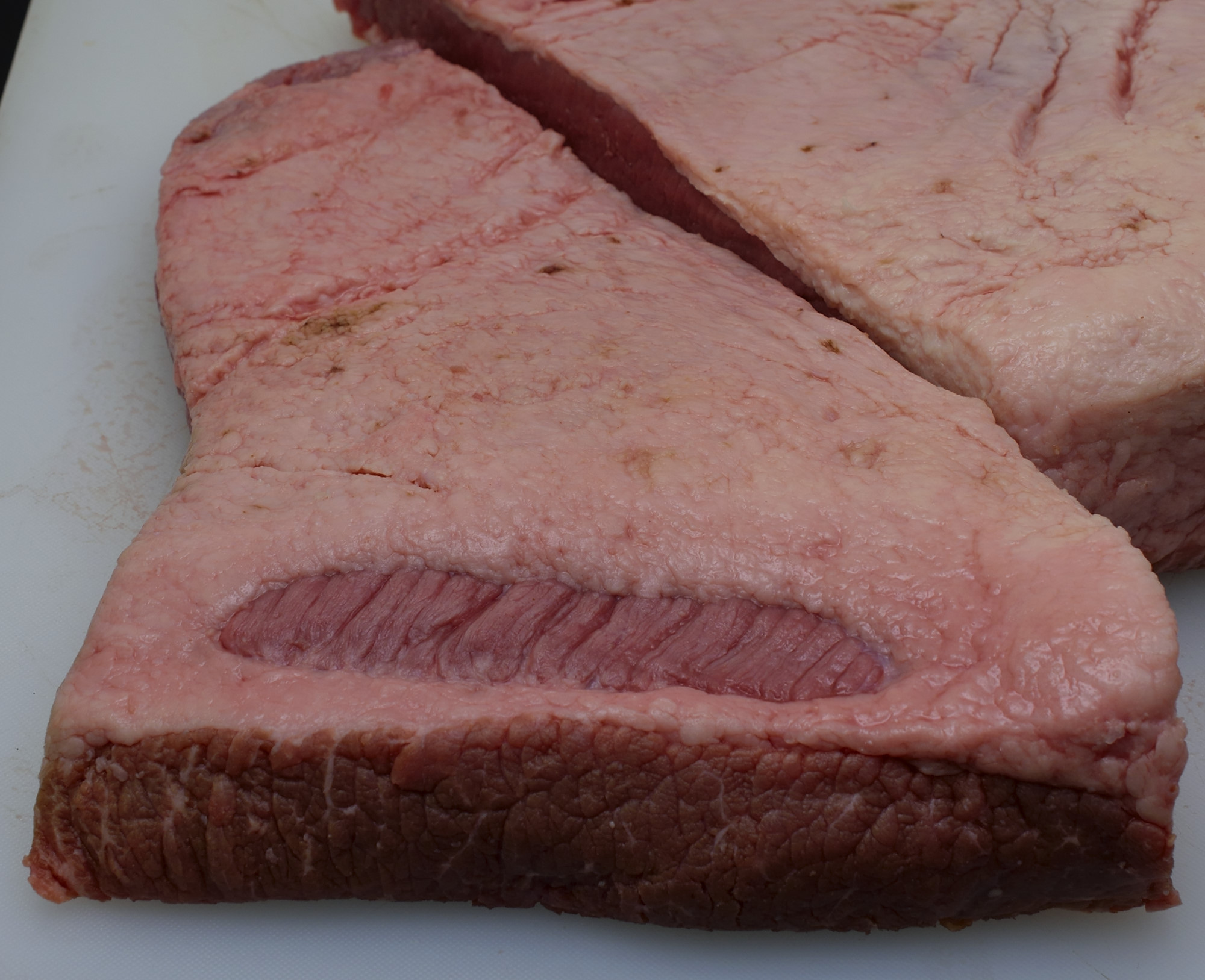 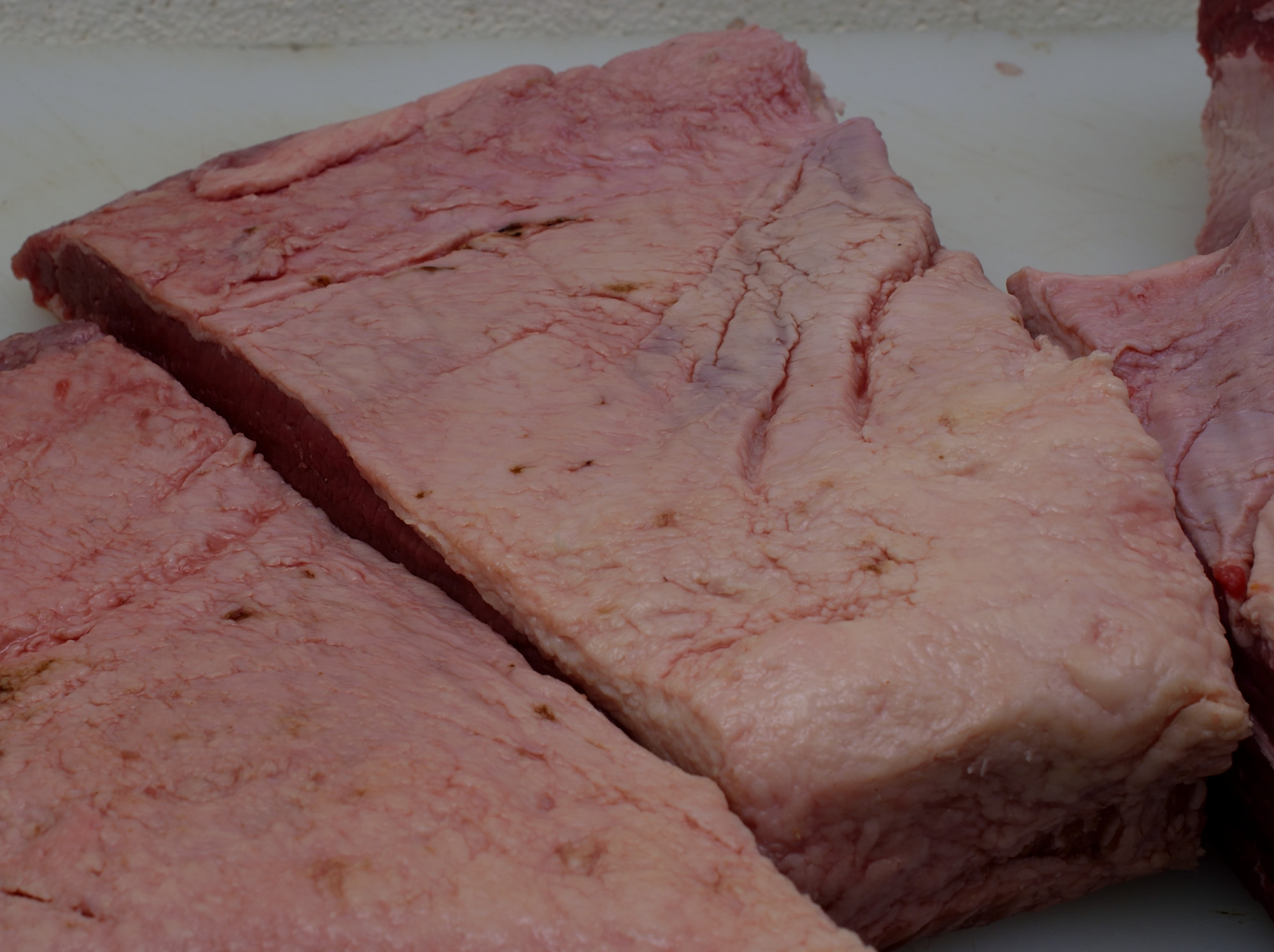 As the cuts proceed to the right, more and more point will appear. 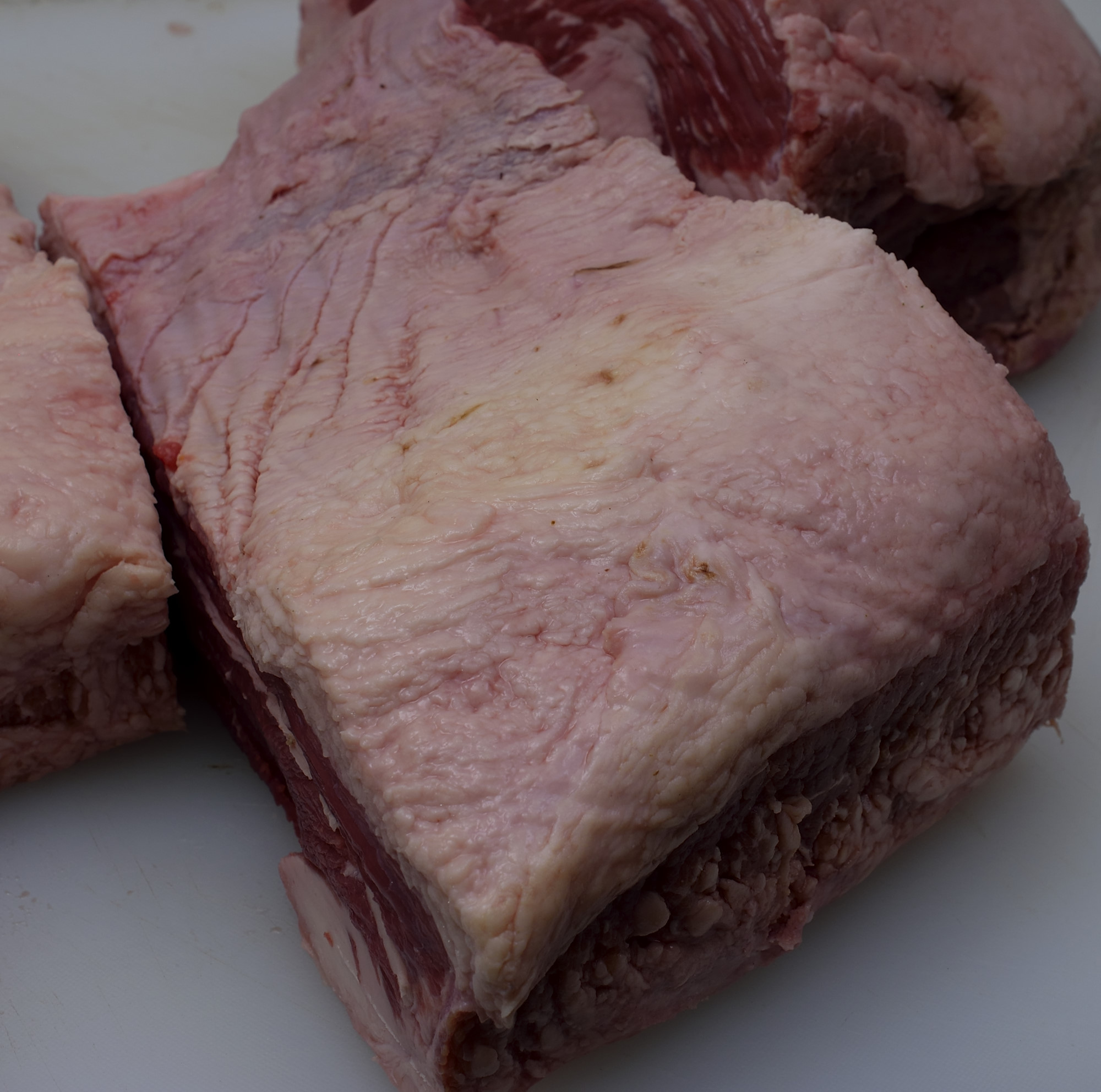 This section is almost half and half flat and point. 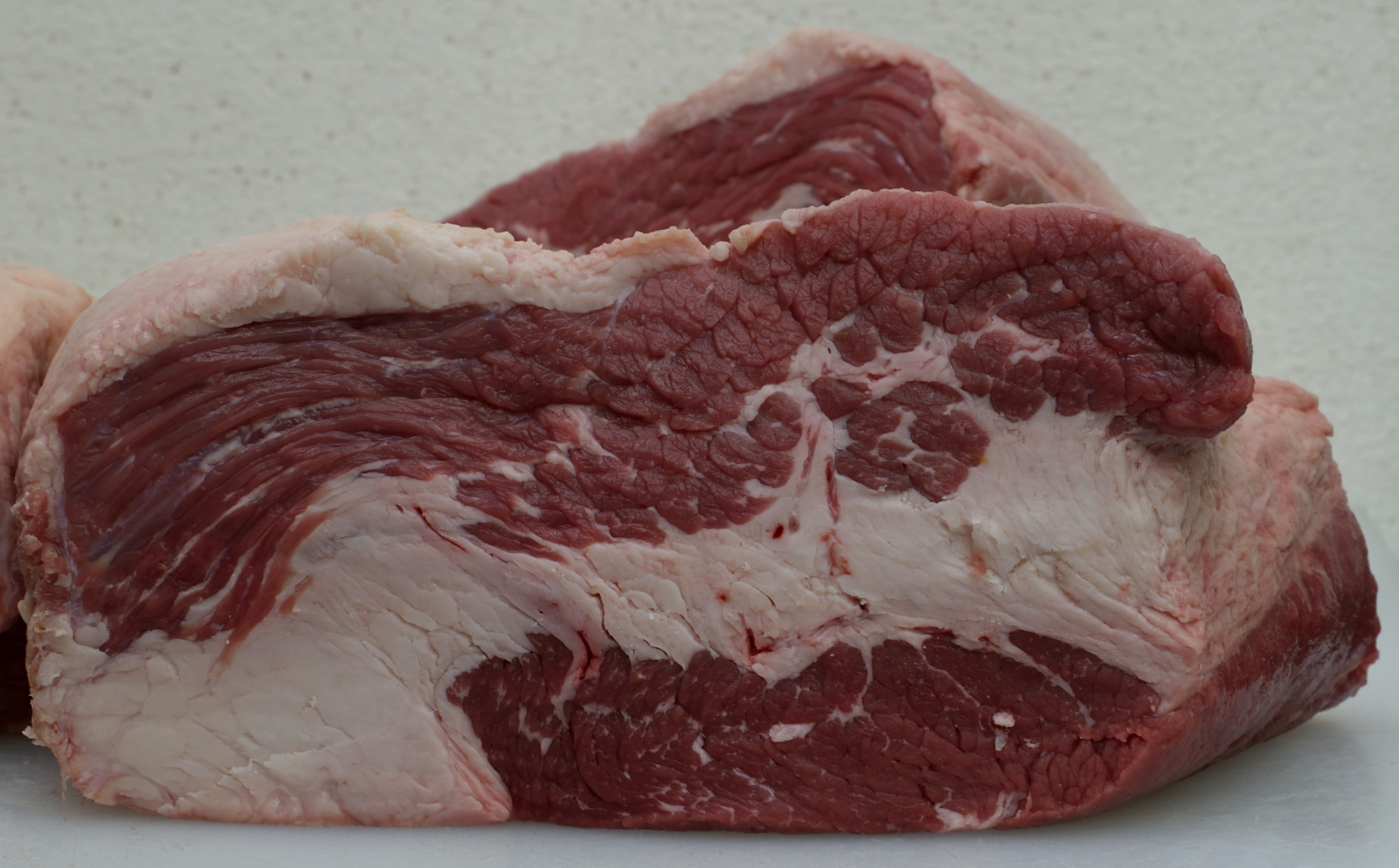 At the very end, only a small profile of flat muscle is visible.

The flat is slightly less marbled than the point. Because of the high levels of collagen present, lean brisket is lower in moisture than the higher priced cuts and steaks. 140 F/60 C will give you traditional results and appearance, as we will see in the second installment of this series. That said, we will push the envelope and process this trimmed brisket at

Sous vide can convert collagen to gelatin at temperatures usually associated with “medium rare.” Brisket does not have as much moisture as more expensive cuts like prime rib do.
We expect this feature to inhibit its ability to take on exactly the same appearance as the more expensive cuts. Even so, no other method of cooking can achieve tenderized brisket that retains this color: 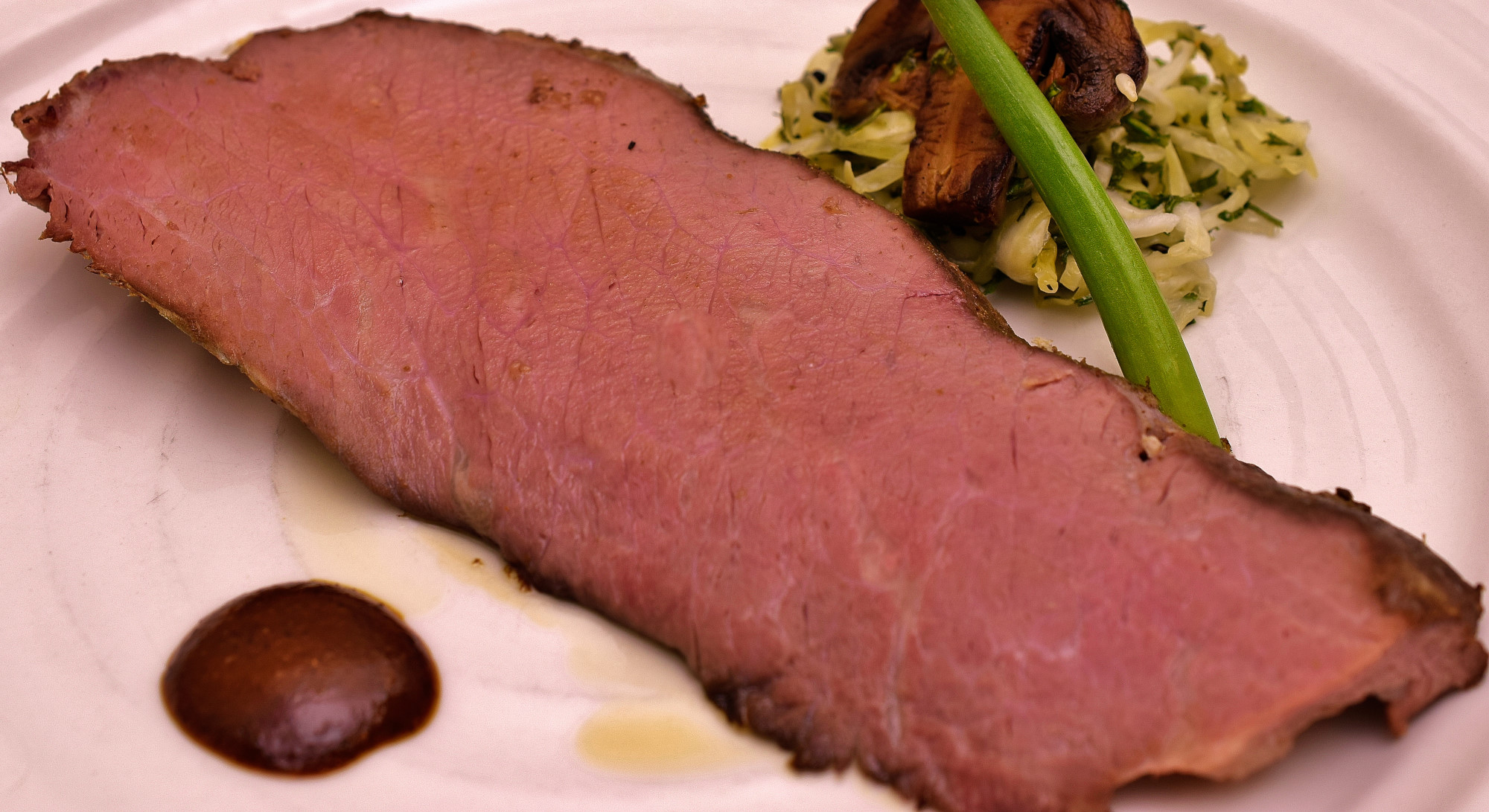 Once processed, both pectorals still benefit from thin slicing on the bias. Brisket also benefits from the strategic incorporation of a natural “jus,” prime rib style, and/or “steak-a-cue” sauces. After sprinkling the meat with some seasonings as explained below, we sear with a torch or in a pre-heated, 350 F/176 C cast iron pan.

You might want to try our signature Dark Side Barbecue Sauce depicted below and linked HERE. 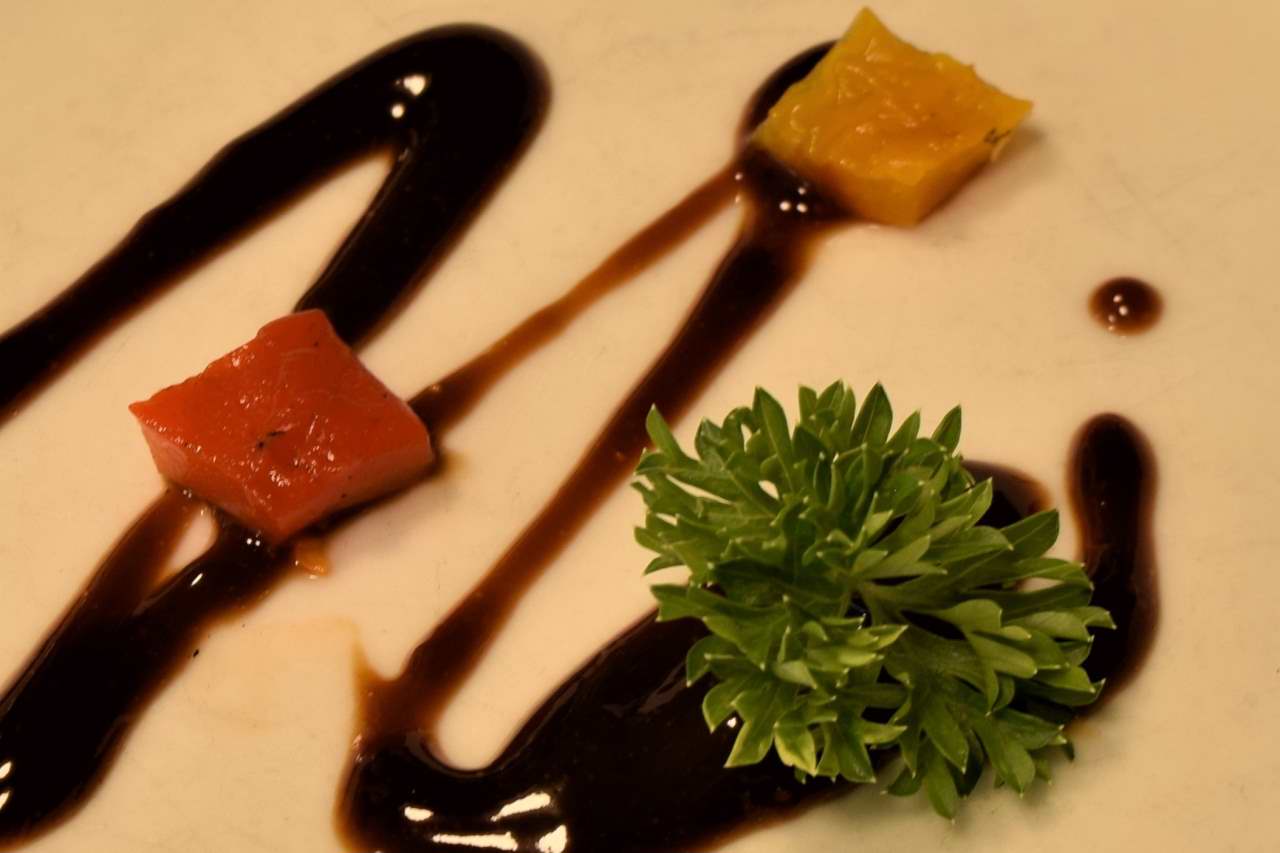 Note: We have already discussed preferences in the appearance of doneness. Sous vide processing time interval determines texture/tenderness. The duration depends on when the meat actually gets tender, which can be very subjective. That’s why we use the pinch/poke method, linked HERE.

There is no exact moment before which the meat is under-cooked and after which the meat is ruined mush. Tenderness occurs on a gradual curve. Using the lower range of temperatures, 129 F-140 F, sous vide enlarges  the tenderness window. Once the meat achieves the desired texture, another 12 hours in the bath at will not have a noticeable effect. If you lower the temperature in the bath to 125  F/52 C after achieving the desired level of tenderness, the meat can be safely held even longer.

As the temperature applied increases, the tenderness window slowly shrinks. I never recommend processing anything under 125 F/52 C for purposes of safety, but that leaves a lot of room before you achieve the boiling point of water, 212 F/100 C. I NEVER use temperatures above 165 F/74 C for meat, and rarely higher than 140 F/60 C.

The season after–keeping it simple

Now that the brisket has been tenderized and pasteurized, you have a choice. The brisket can be served immediately. It can also be cold shocked in iced water to 70 F/21 C and then refrigerated until you are ready to use it. As long as the seal on the package is not broken, the brisket can be safely kept for an extended period of time, much like an unopened carton of pasteurized milk. However…

We implemented the lower range of temperatures in processing this brisket, but it is inevitable that the brisket will lose the pink color if we chill and refrigerate it. For this demonstration, we will take advantage of the color that we worked so hard to achieve. Should you decide to cold shock some or all, sear the chilled brisket in a cast iron grill pan or thick bottomed skillet until it achieves an internal temperature of 125 F/53 C.

Remove one of the packages of brisket from the bath. Cut open a corner of the bag and drain the juices into a microwaveable container. Line a strainer with a paper towel and moisten with the spray bottle of water–this prevents the juices from clinging to the filter. Put the strainer on top of an appropriate container to catch the filtered jus.

Process the juices in a microwave oven for one minute (or bring to a boil on the stove), and strain through the moistened paper towel. Season with a pinch of kosher salt to taste. Set aside. 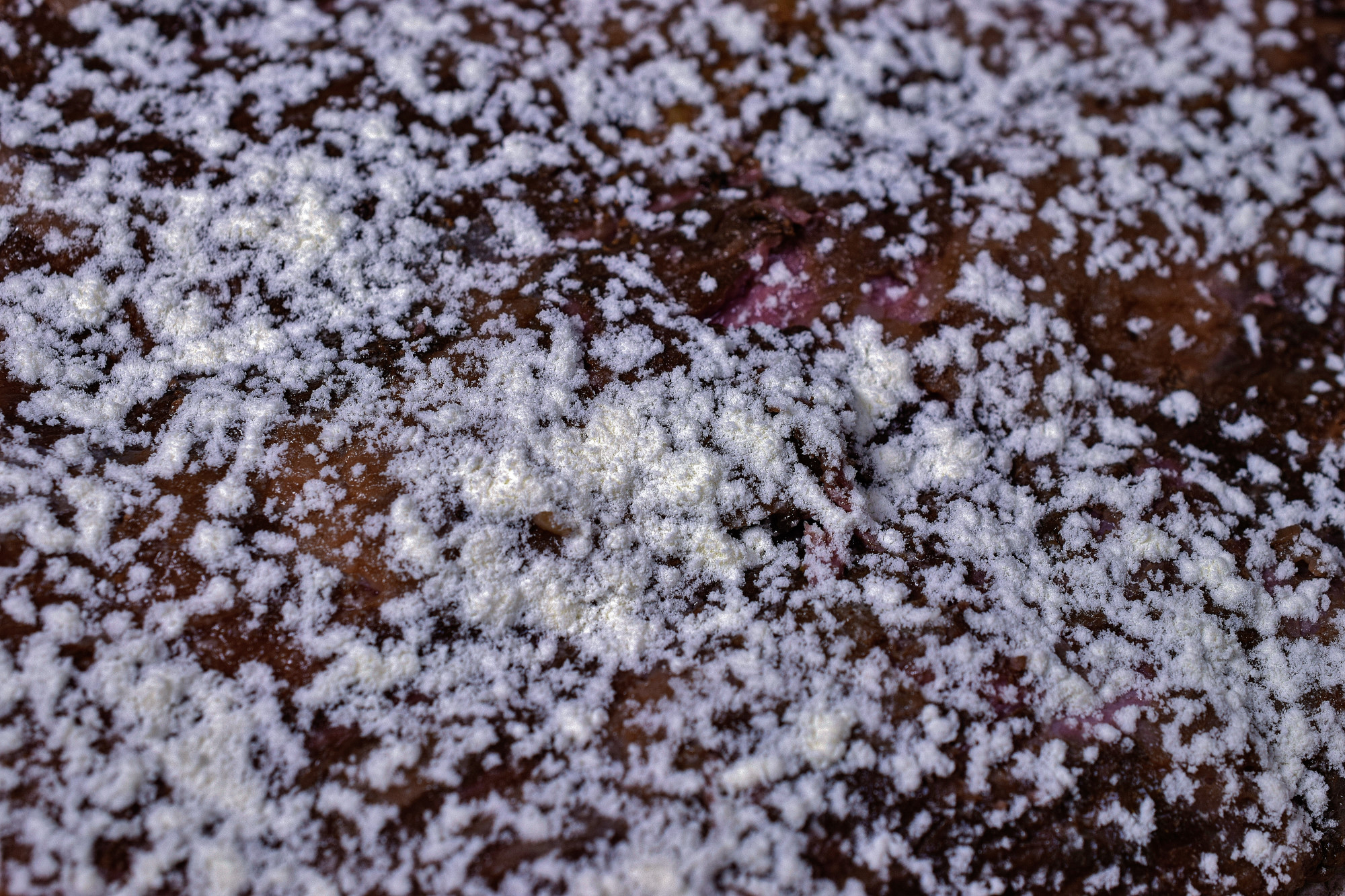 Remove the brisket from the bag and pat dry with a paper towel. Shake or sift the powdered egg whites over the surface of one of the pieces of brisket. If you prefer to use fresh egg whites, use plastic gloves or a pastry brush to paint the surface of the brisket. 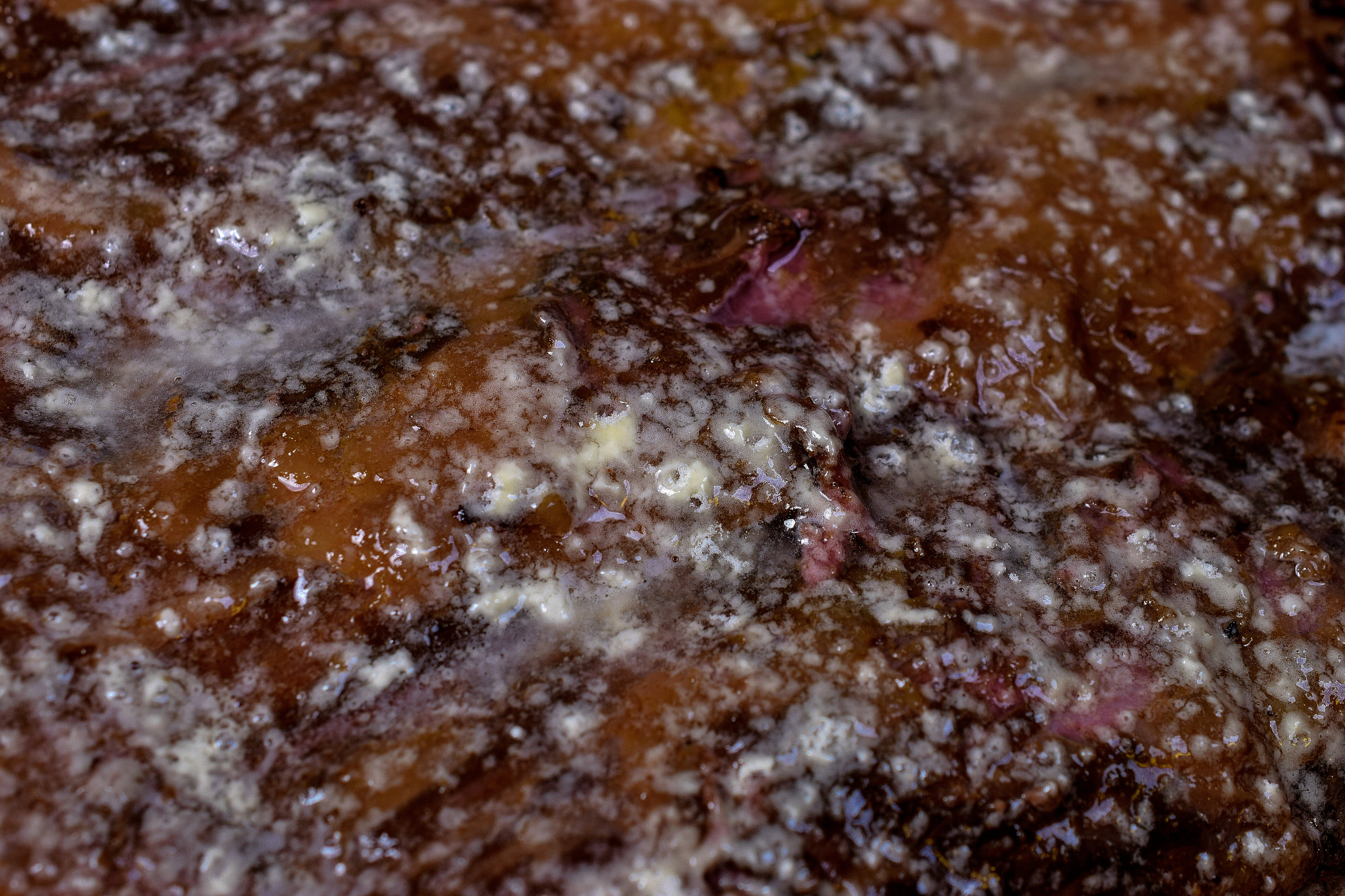 Use a spray bottle to mist water over the powdered egg whites (not necessary if you use fresh). 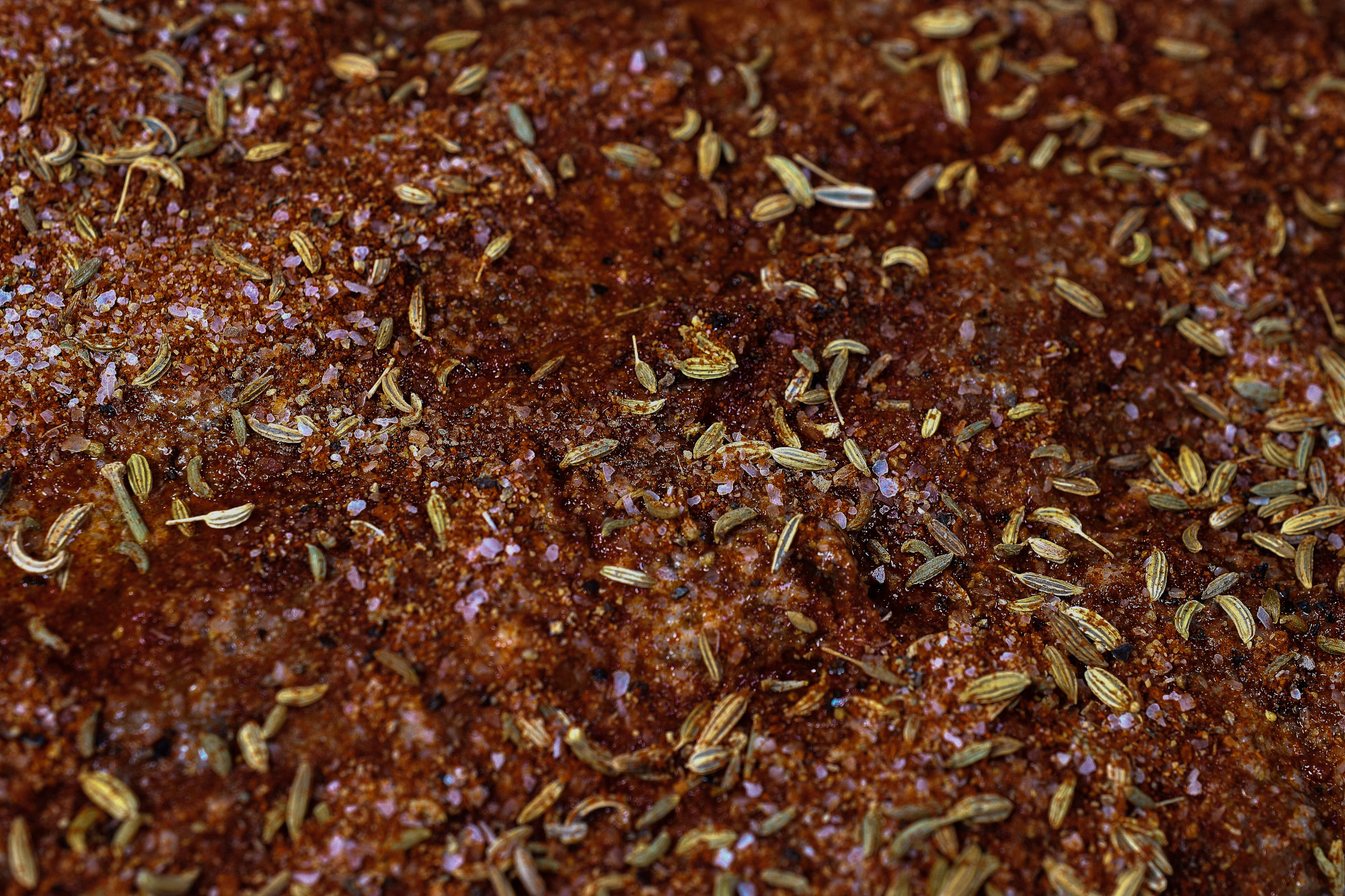 Sprinkle with the seasoning mixture. 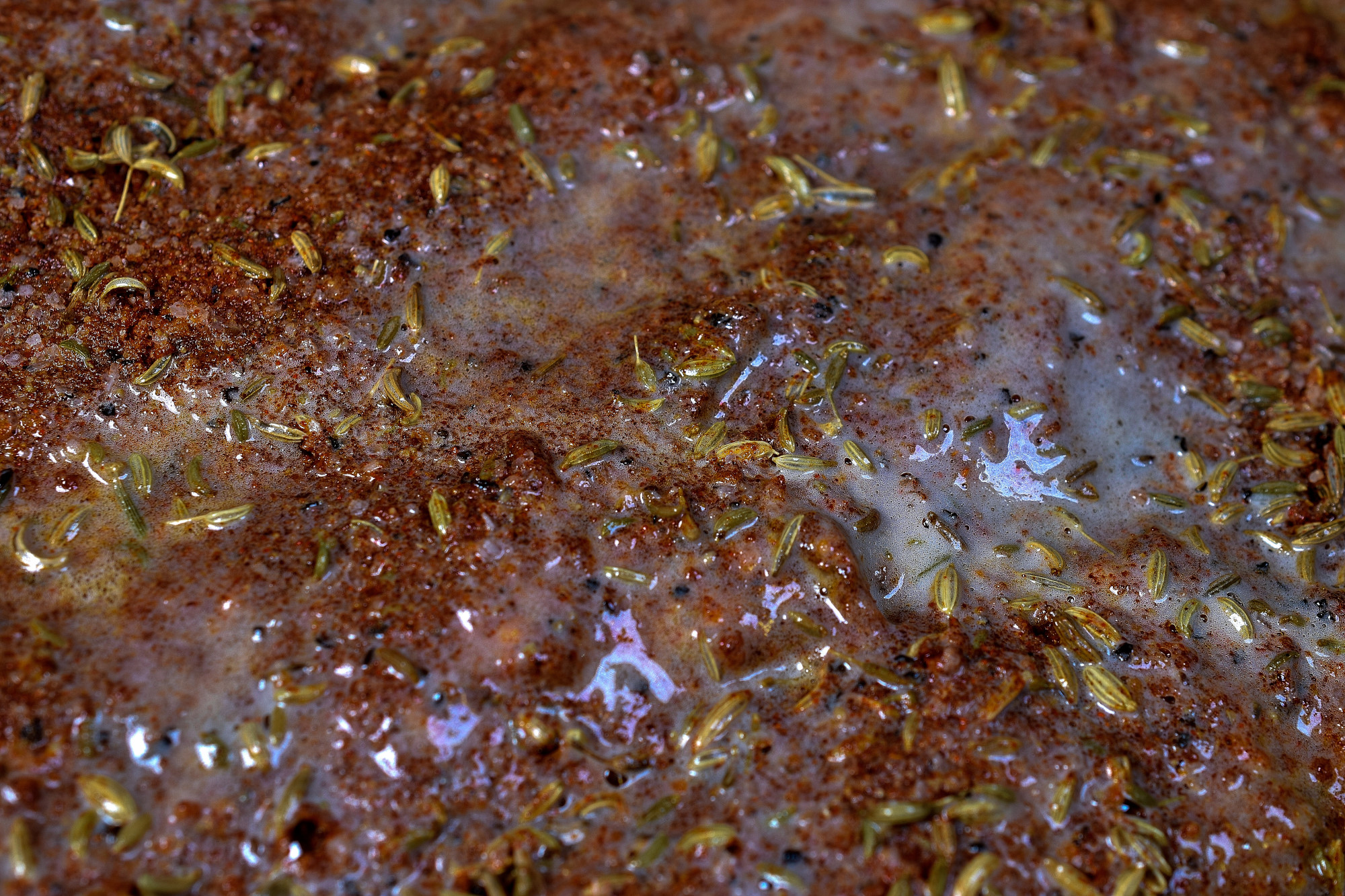 Drizzle the surface with oil or spray with PAM. 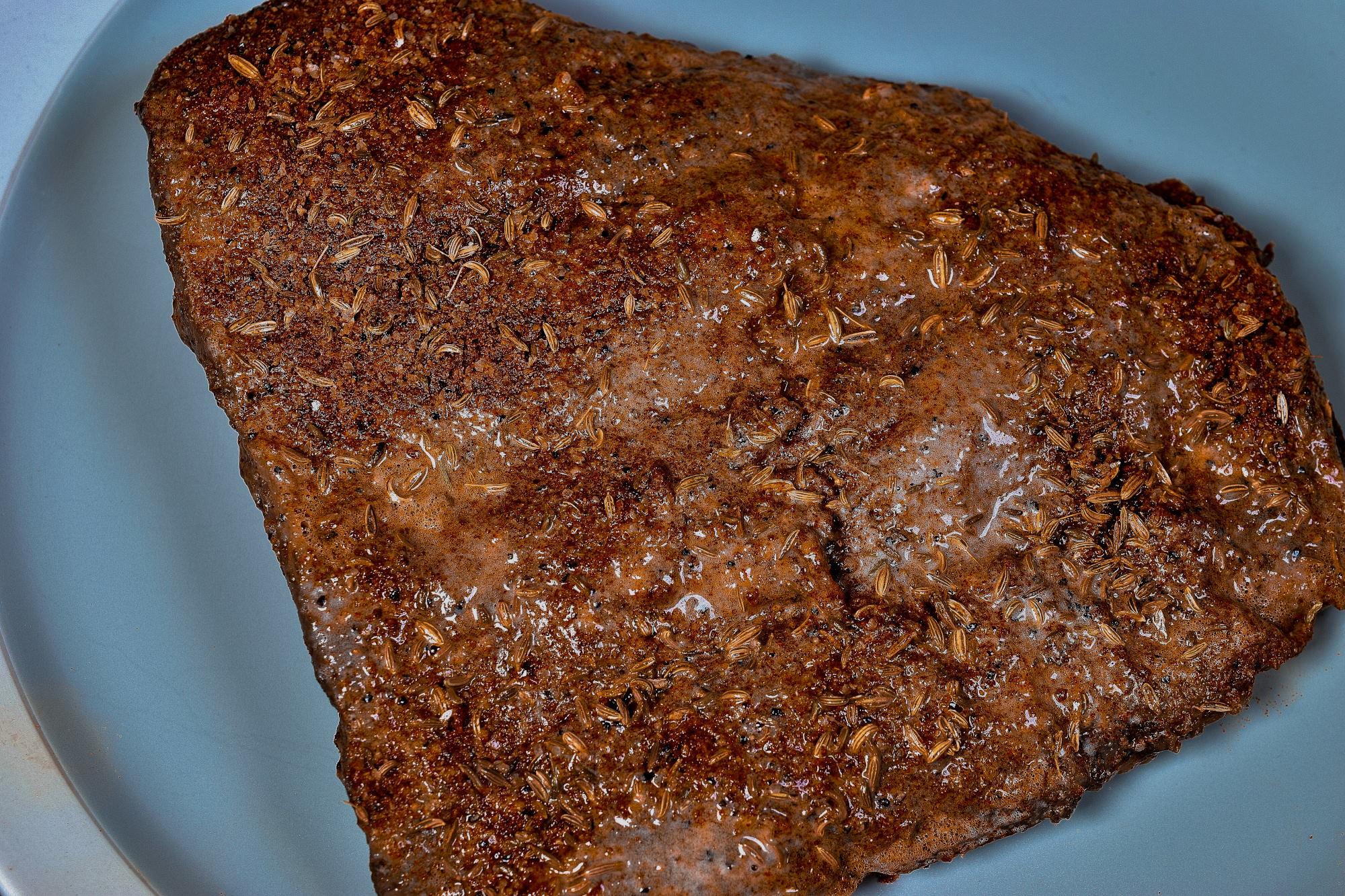 Allow to rest for two minutes to allow the seasonings to dissolve in the oil. 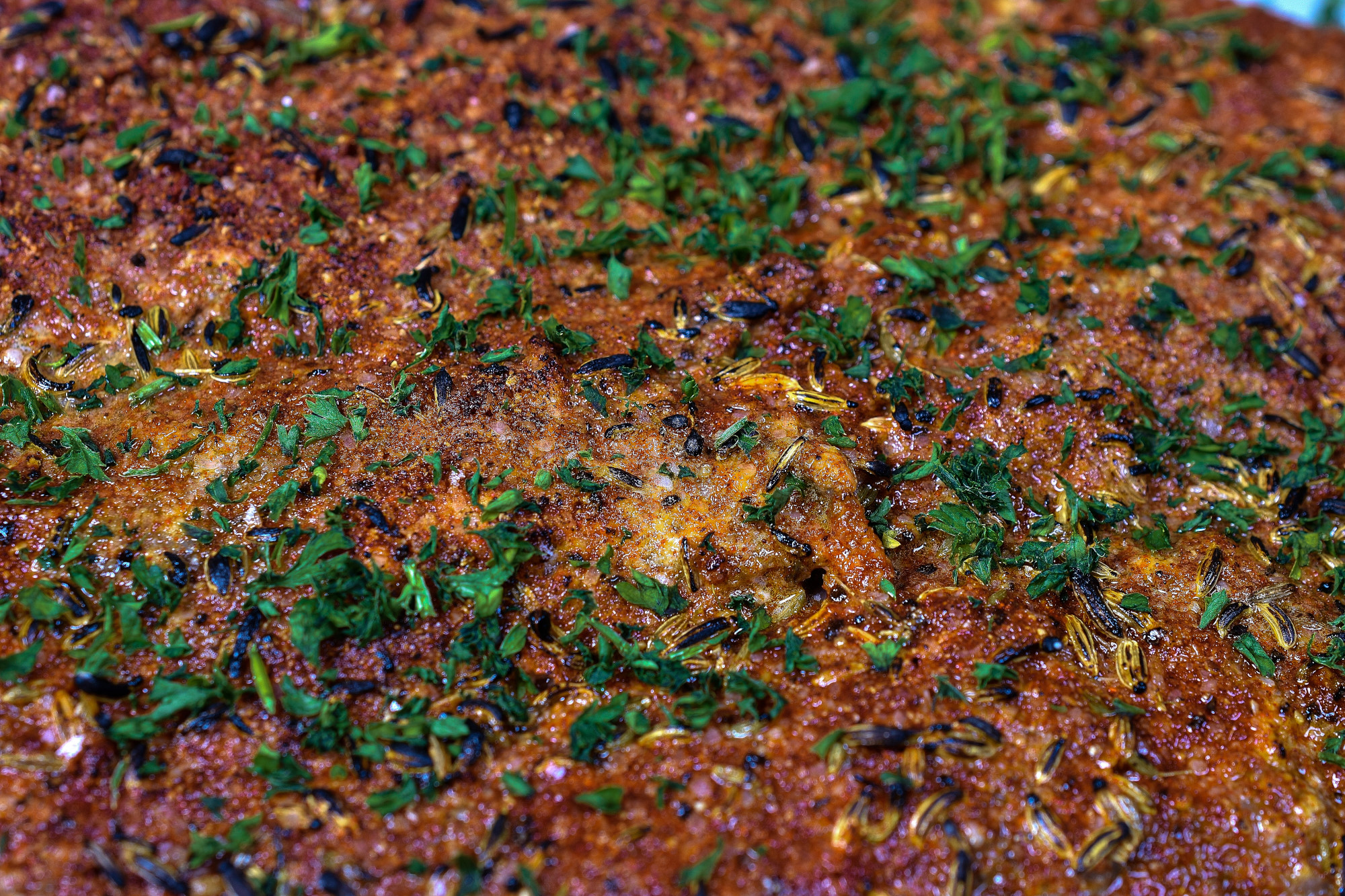 Torch the surface or use the browning element in your oven to lightly brown the crust. Do not over heat.

Slice thinly on the bias, drizzle with the clarified juices, or a little Dark Side Sauce–or both! 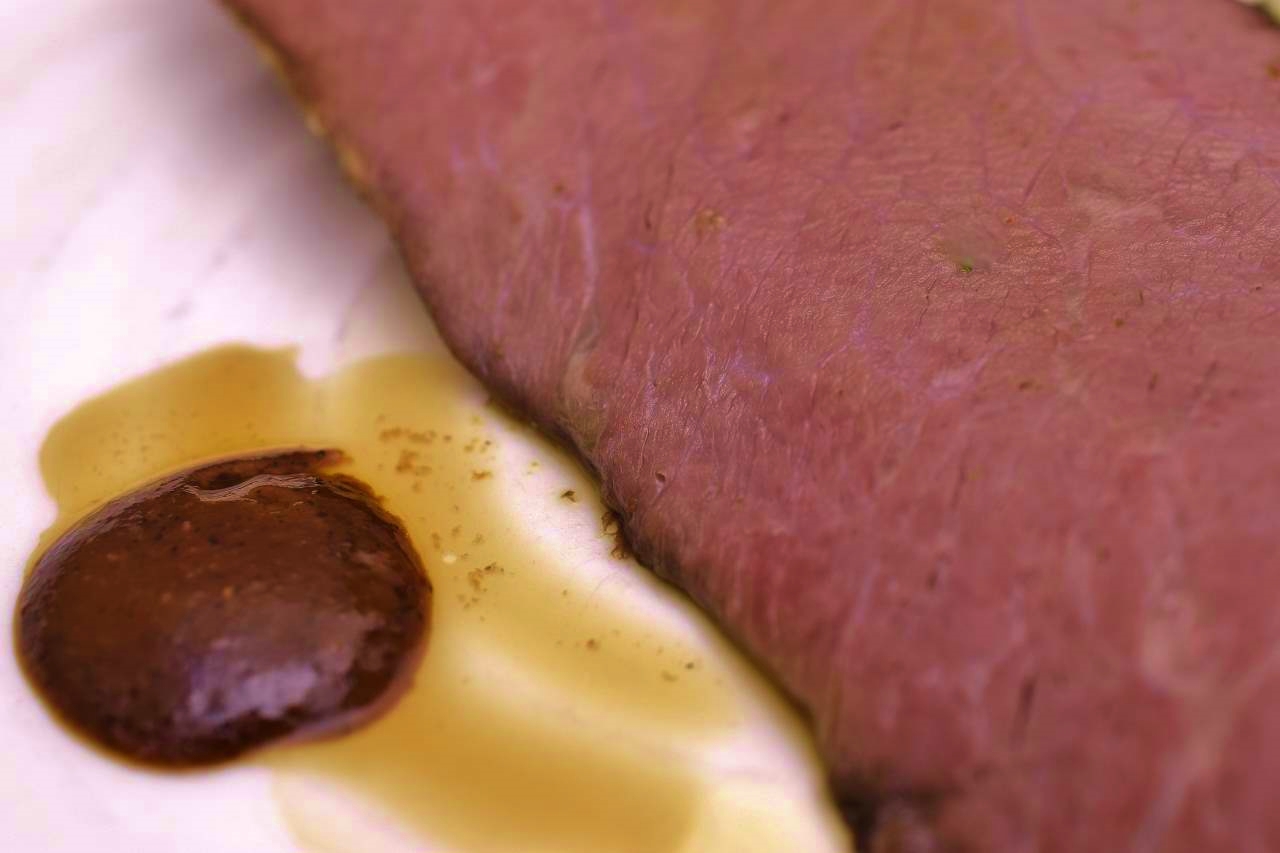 This completes the first part of our sous vide brisket tutorial. We will refer to it in upcoming beef brisket recipes and applications. Click the link HERE to proceed to Part Two!

So many options–so little time! 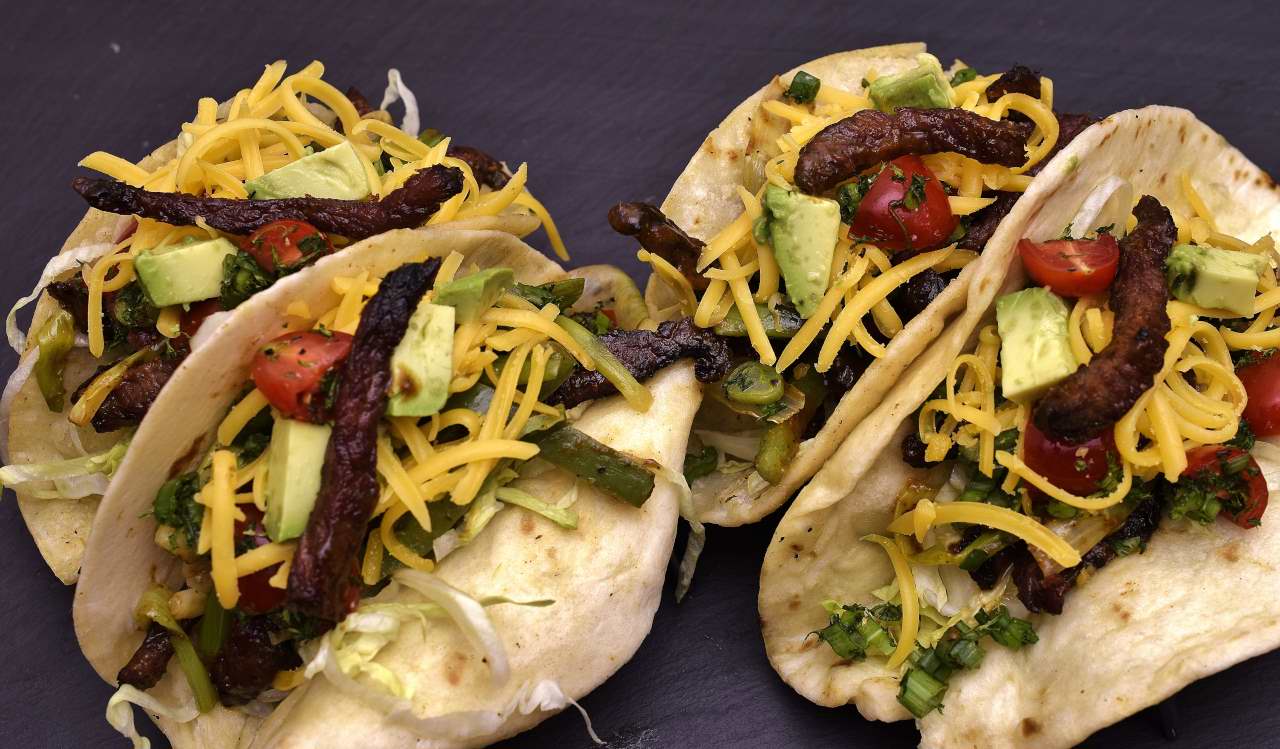 You can use this brisket for anything that calls for steak! 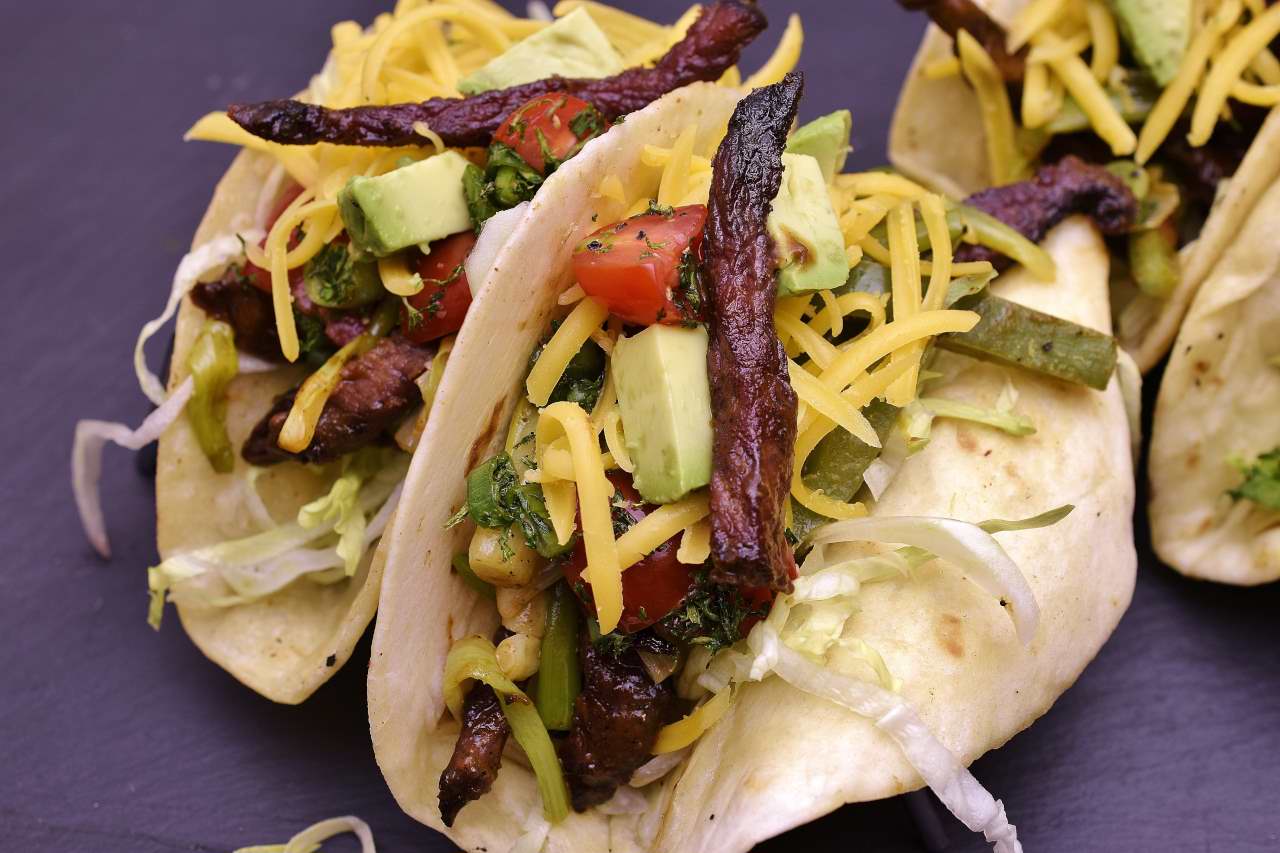 Most people don't know that the only difference between tough and tender meat is a protein called collagen. Meat never has more than 6% collagen by weight--but that is just enough to distinguish the sublime tenderness of filet mignon from the shoe-leather like toughness of ill-prepared beef brisket.

That's two of the great things about sous vide; it preserves the moisture AND the flavor.