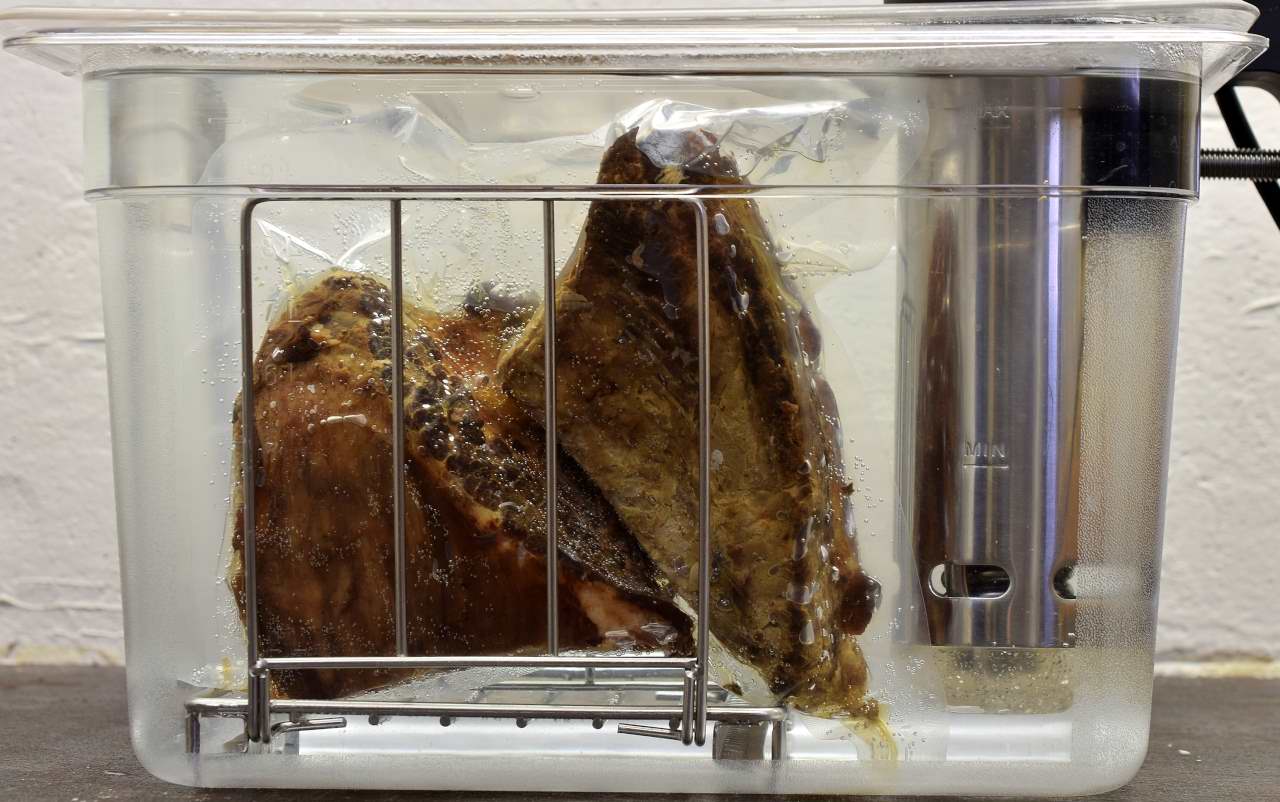 Season the brisket with the kosher salt. Heat the thick bottomed skillet to 250 F/121 C, add the oil and the brisket to the pan at the same time. Brown well on all sides–if the roast has an “edge” you can stand it up against the side of the pan to achieve uniform color all around. This process should take no more than half an hour. Turn off the burner and let the roast sit in the pan while it cools enough to be easily handled.

After the interval has elapsed, shock the package in iced water until it achieves 70 F/21 C–about 15 minutes. Refrigerate to 40 F/4 C before proceeding.

Make the Dark Side Sauce if you haven’t already. Dip the sealed brisket in hot tap water (or a sous vide bath) for a couple of minutes to dissolve the gel. Cut the corner of the bag and collect the juices in the bag. Most enthusiasts discard the juices but they are full of flavor. Learn how to clarify them HERE.

Remove the brisket from the bag and pat dry with paper towels. Remove external fat, but keep in mind that when you sear the thin sliced beef most of the fat will render out on its own. Slice the beef against the grain as thin as absolutely possible. Set aside.

Heat the cast iron grill pan to 250 F/121 C, dip a paper towel in vegetable oil and use it to polish the grates. This will remove any oxides and lubricate. You can also spray with that PAM stuff, we call it “spray release” these days. It is perfectly safe and very efficient. It also has a little bit of lecithin in it, which is a natural product that binds water and prevents sticking.

Use the serrated knife to split the baguettes lengthwise. Spread evenly with the softened butter. Some people substitute mayonnaise for this step. Mayonnaise is predominantly oil with a tiny bit of egg and vinegar. It works for this, but I find that it makes the bread a little soggy because of the moisture. 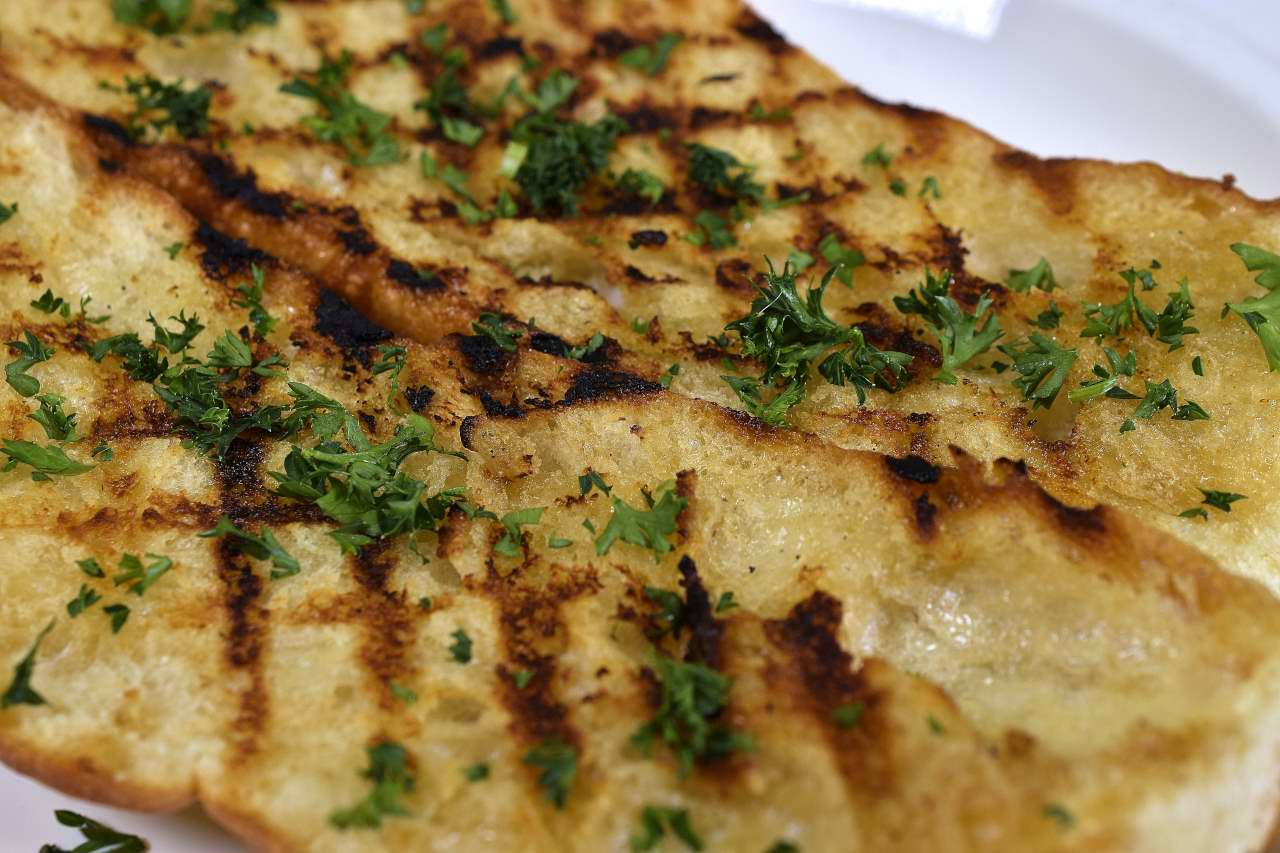 Grill one of the baguettes to heat and to create the hash marks. Tip: put a steak weight or even a small plate on top of the bread to hold it flat against the surface. This helps to create the uniform marks. Remove the bread from the pan and put on a plate. Repeat the process with the other baguette. Stage into the warming oven. Most modern plates will tolerate quite a bit of heat–don’t depend on plastic for this. 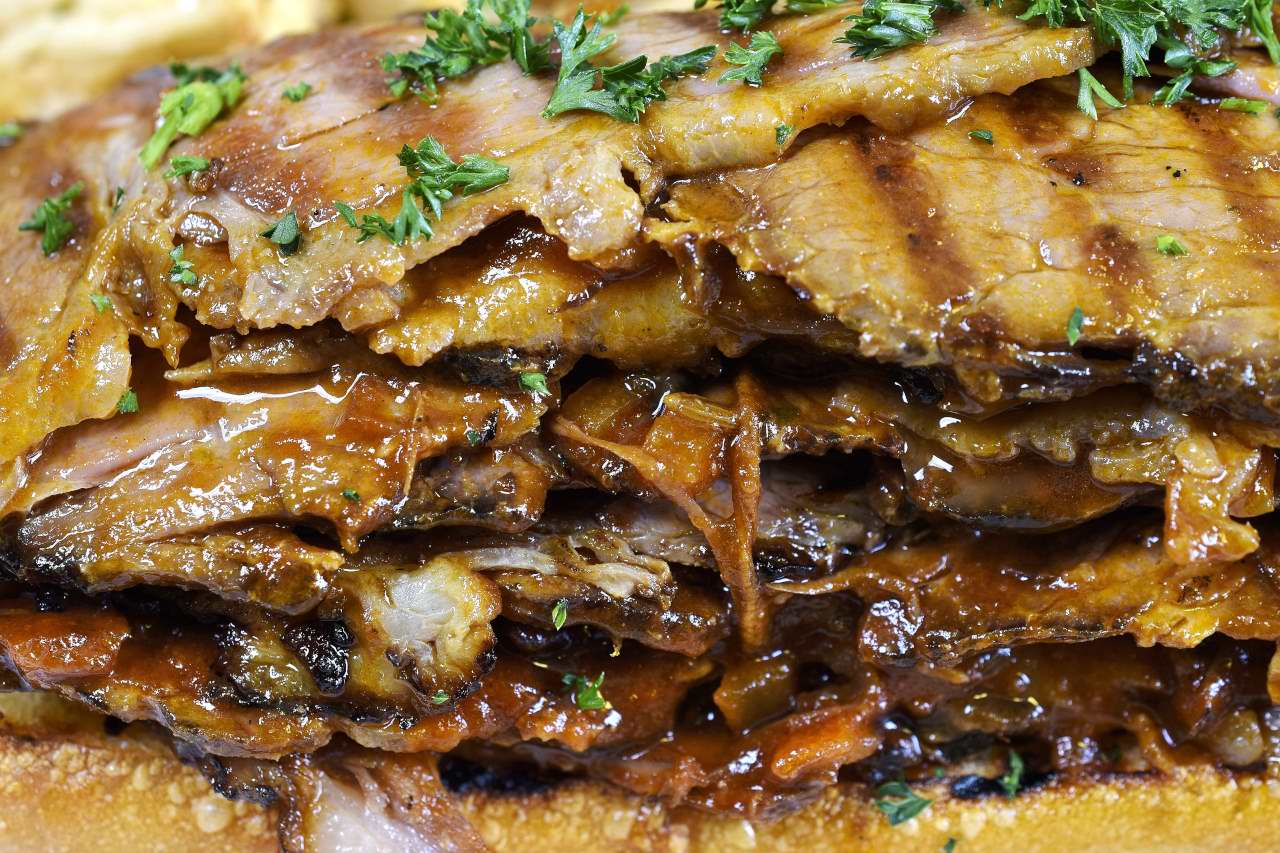 Start grilling the sliced beef in the same pan, one layer of slices at a time. As you achieve marks on the one side, remove from the pan and start stacking them up on a plate. Drizzle a few drops of the BBQ sauce over each layer to create the saucy effect. When done, turn off the burner and stage the meat into the warming oven with the bread.

Peel and slice the onion on the mechanical slicer or mandolin to about 1/16″/2 mm thick. They do not have to be paper thin; uniform thickness will give the best results when it comes time to fry. Sprinkle the sliced onions with kosher salt and ground black pepper. Let them rest for five minutes–this will liberate some juice from the onions. While you wait, combine the flour, cornstarch, baking soda and salt. Toss the sliced onions with the flour mixture to completely coat. As they sit the onions will continue to release moisture, so toss lightly again just before frying. 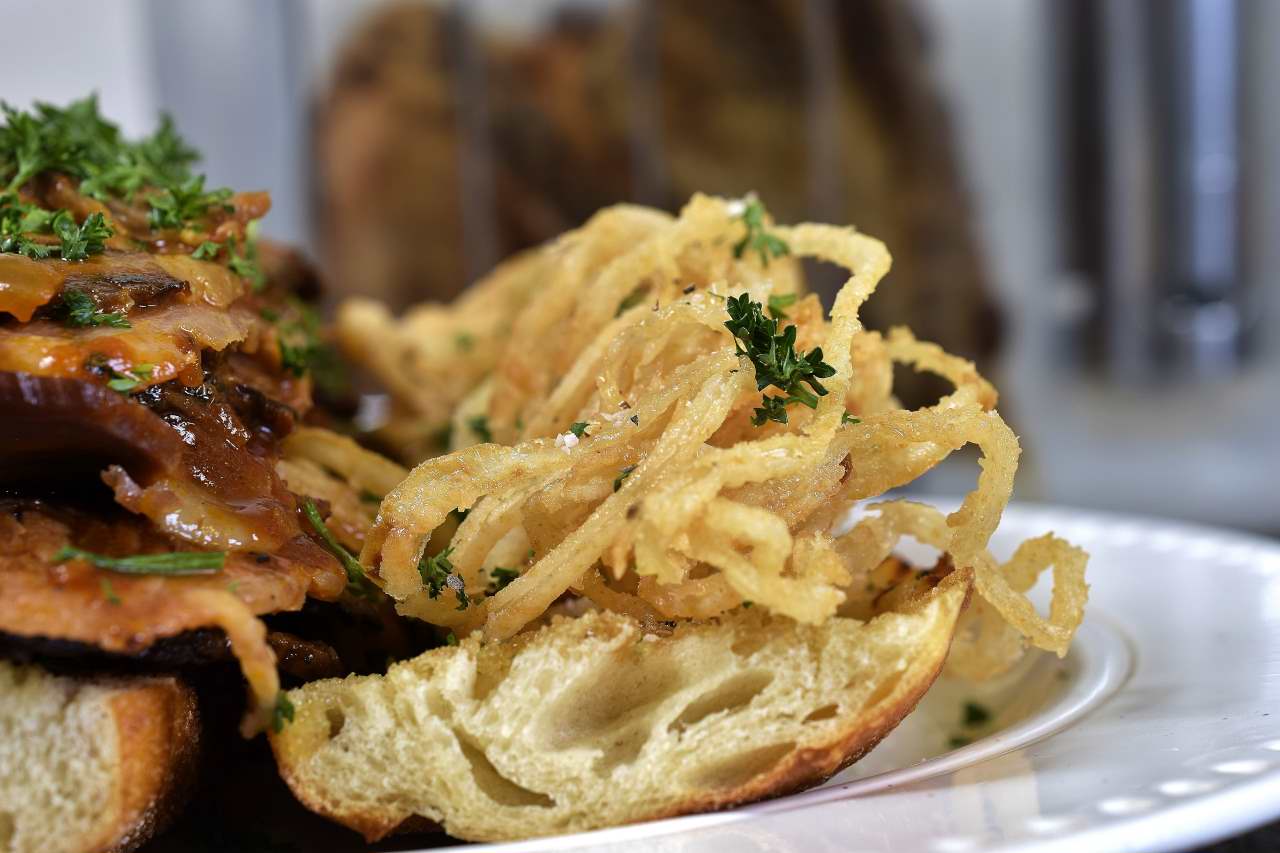 Cover a plate with paper towels and set aside. Fill the skillet with oil no more than half way up the sides. This allows for the volume of the onions and the inevitable foaming of the oil. Heat the oil in the skillet to 300 F/150 C. Toss the onions lightly to separate again. Shake off about a fourth of the onions and stage into the oil. They will begin to bubble and sizzle immediately. Lightly spread them around with tongs or a fork. Fry until crisp–remove when you start to see browning. Drain on the paper towel. Repeat this process until all the onions are crisped. 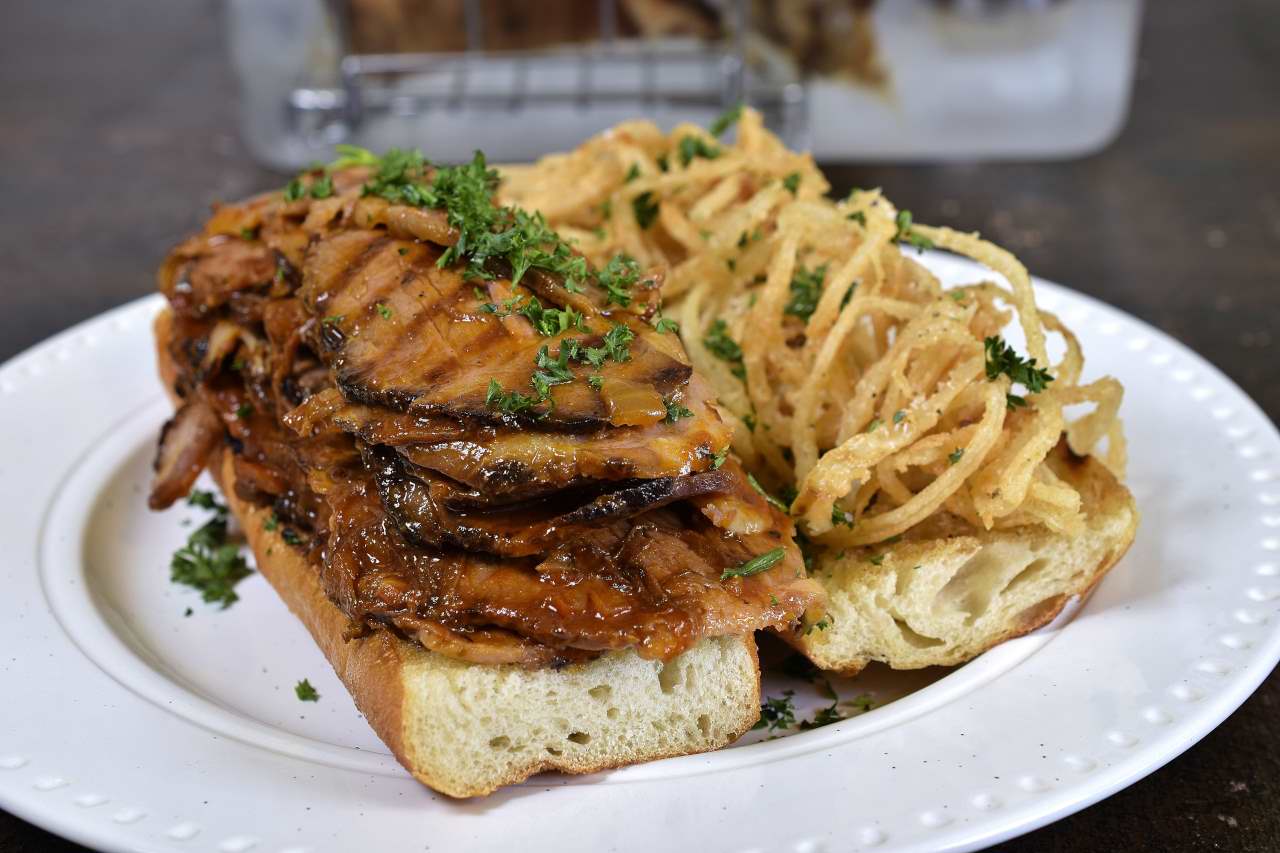 Stack the meat on the bottom half of the bread and arrange the onions on the other. Sprinkle with a little bit of parsley for the picture (optional). 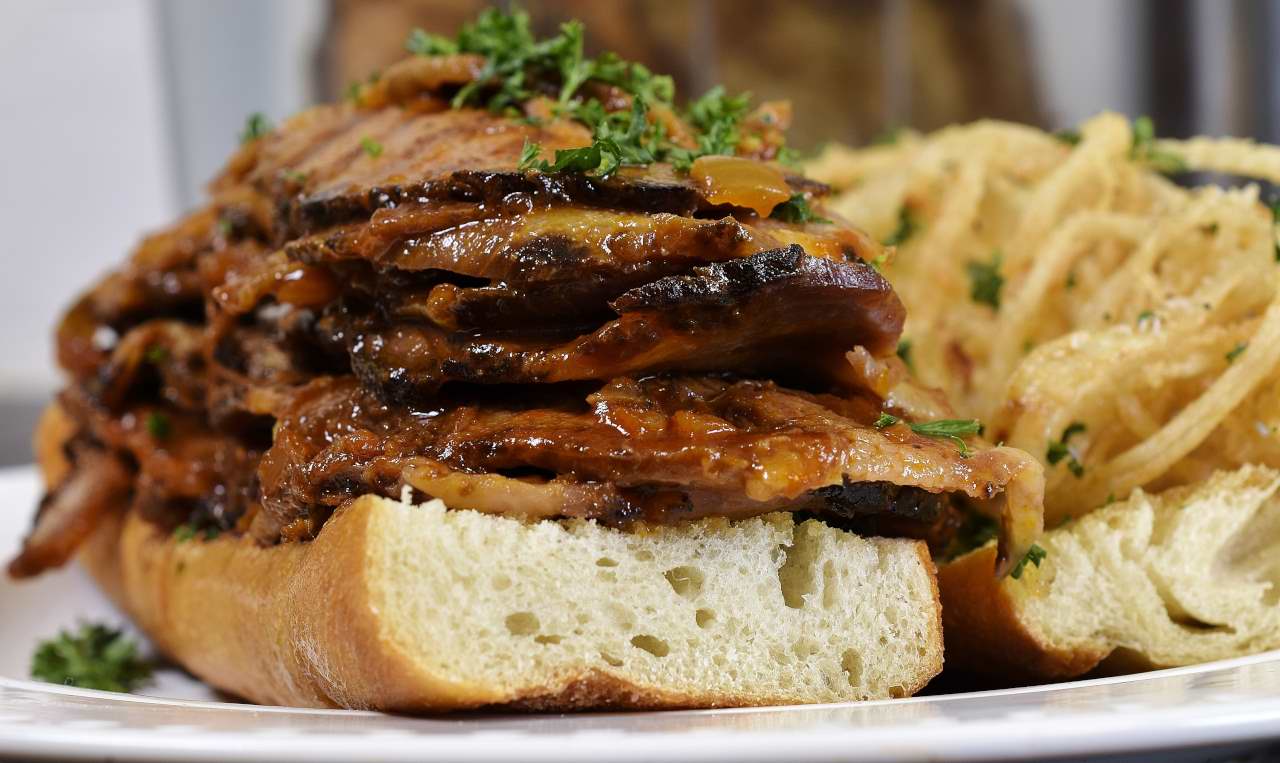 You can see that stacking the meat in an orderly fashion creates a different effect from just “piling it on.” 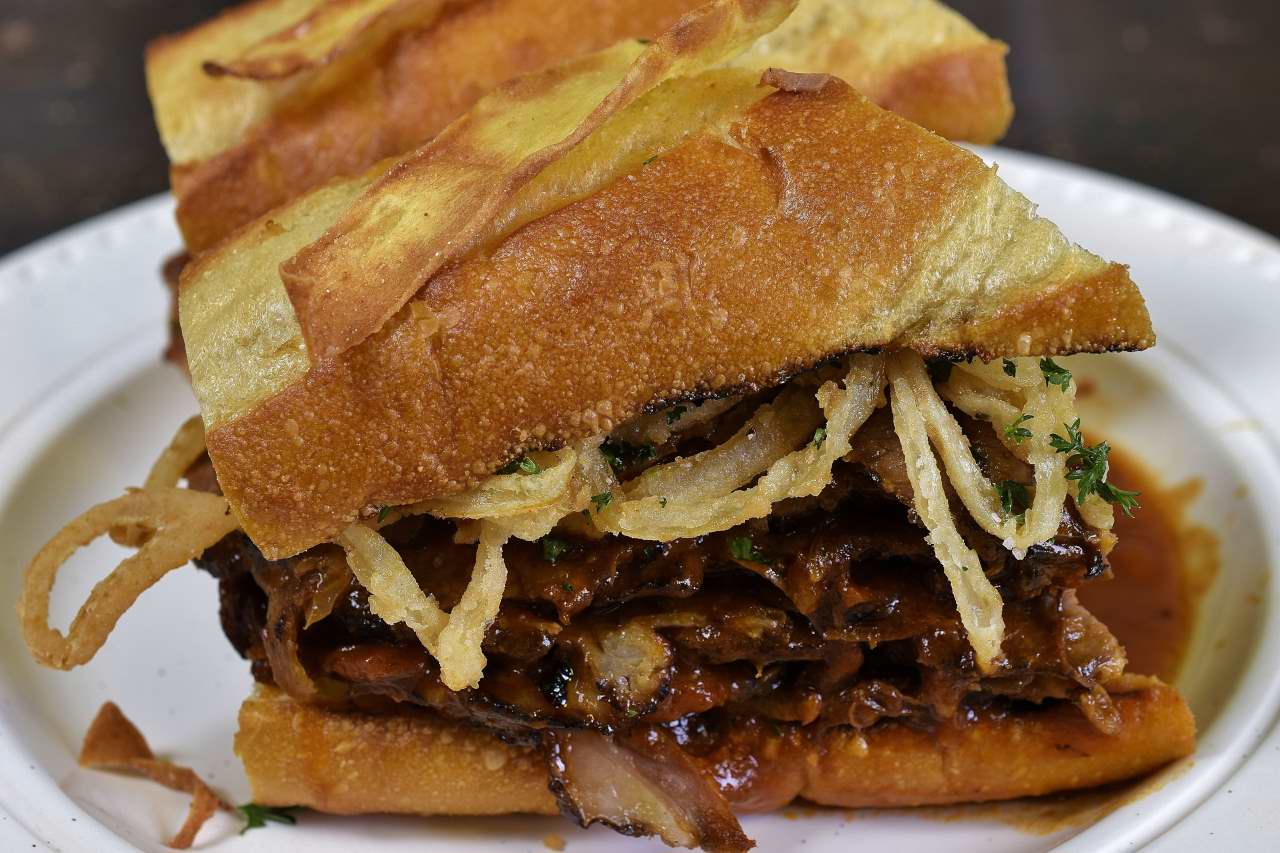 Not that there is anything wrong with that. Assemble the sandwich and cut in half on a sharp bias 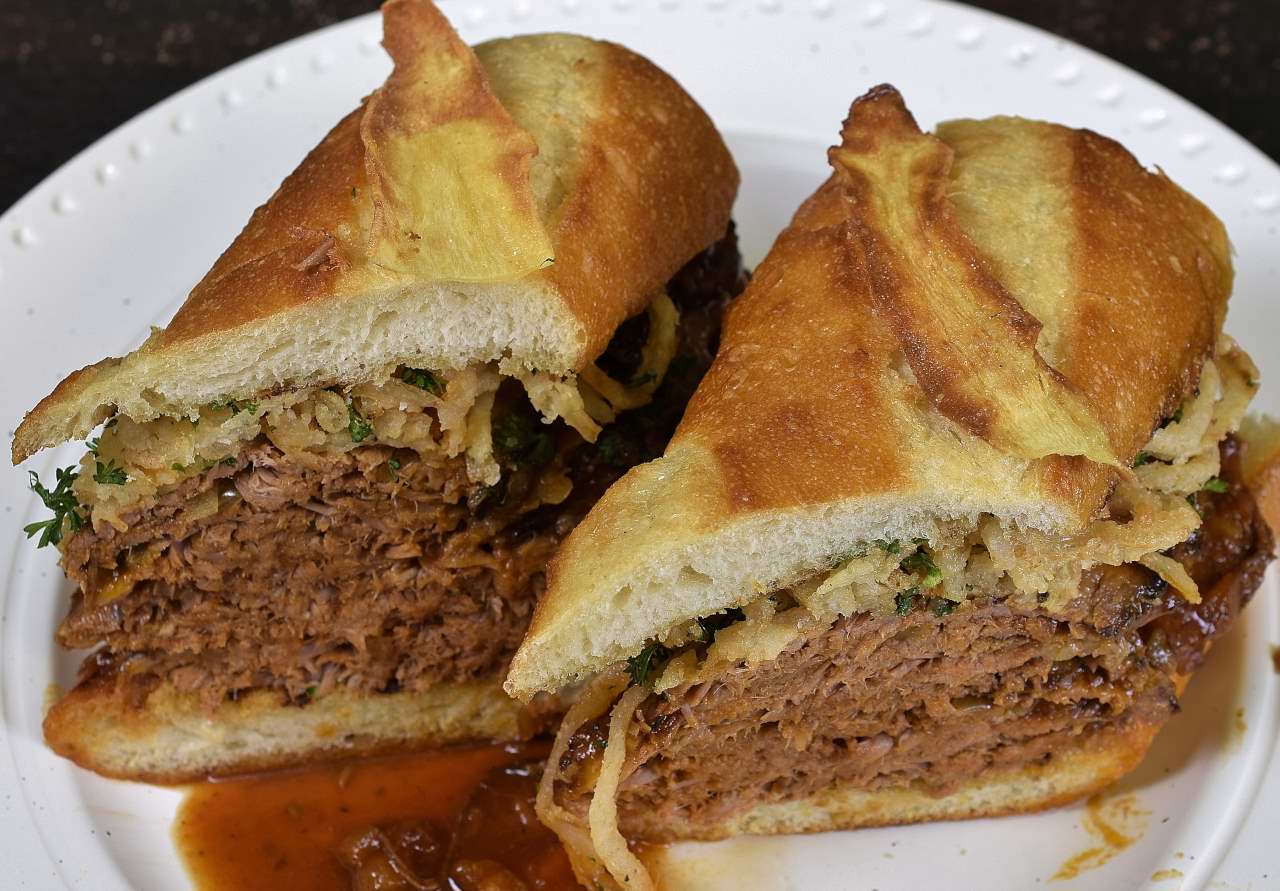 Create a little pool of the sauce in front of the sandwich. 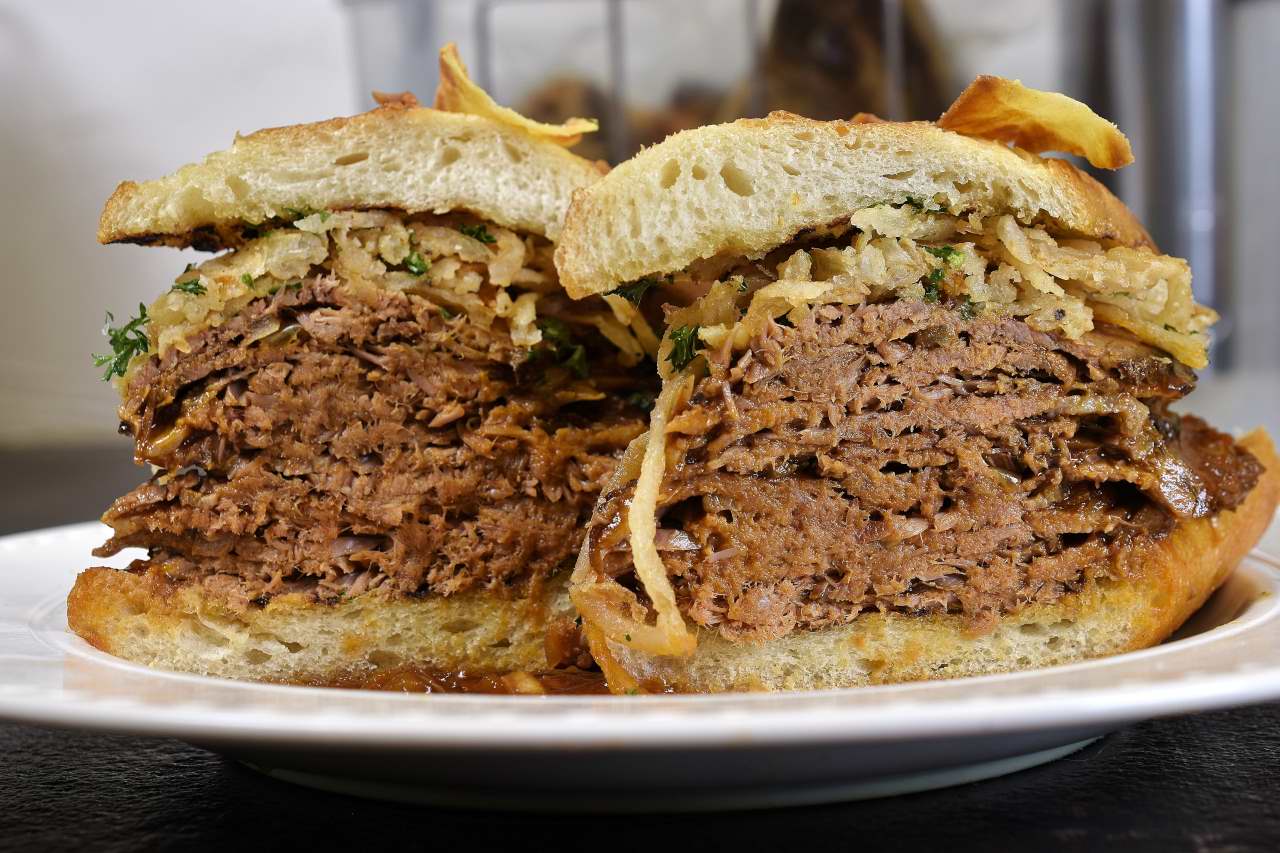 This is the deli effect that I referred to earlier. 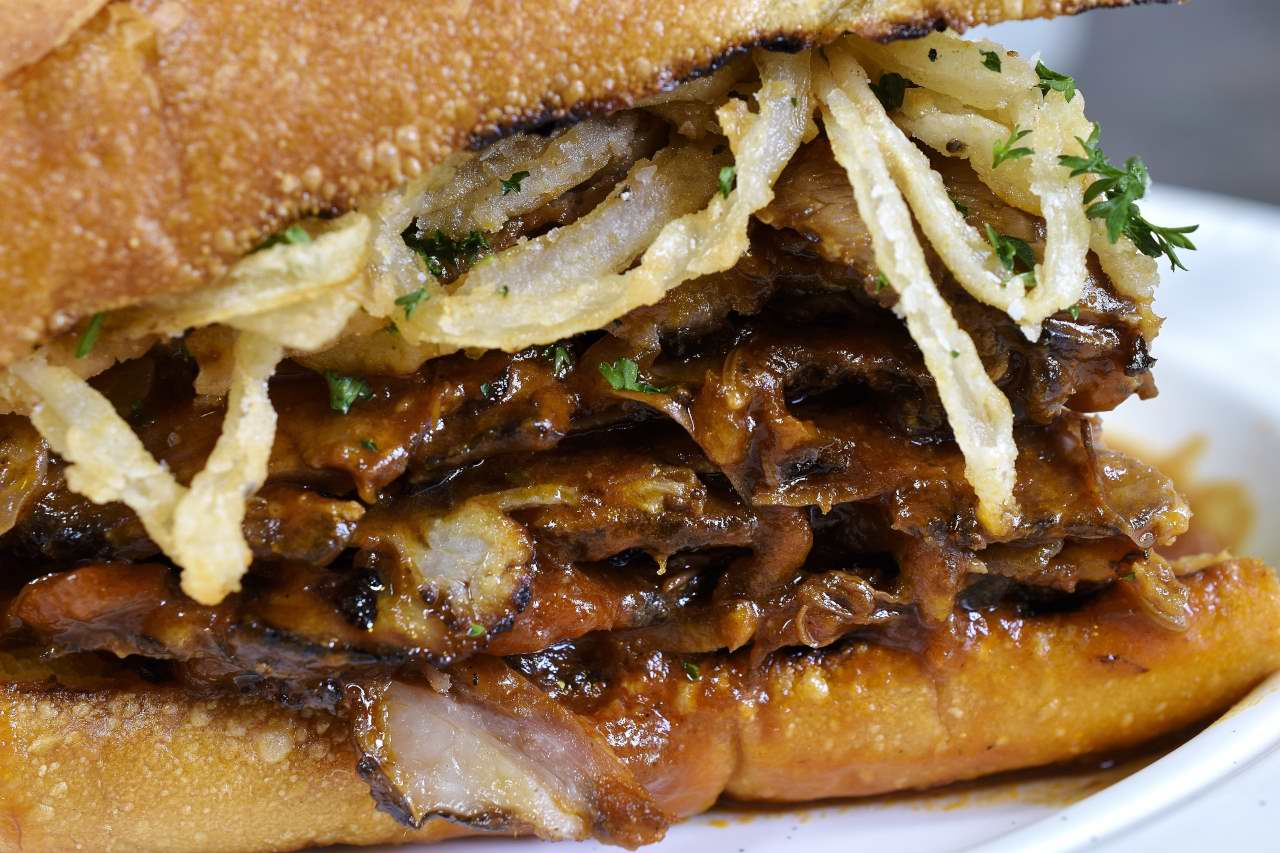 That’s quite a profile.

Delicatessens are noted for serving sandwiches with meat sliced very thin and stacked very high. The crispy fried onion "nest" brings more altitude to the sandwich along with flavor and crunch. The novel substitution of a French baguette for the characteristic soft roll brings even more texture to the zesty, spicy flavor profile.

While any home-made or generic barbecue sauce will suffice, this recipe directs the reader to our own proprietary version, called "Dark Side Sauce." It is easy to make and yet distinctive from typical versions. I was experimenting with the balance of the ingredients one day when my wife walked in, looked at it, and said "that's kind of on the dark side." It stuck.