We hope you benefit from this recipe/treatise as much as we enjoyed creating it. Make sure you scroll all the way to the prologue after the main body so that you can take in some halibut canapes that we made  after we finished the main shoot. Those of you familiar with my work know that I take a dim view of the term “leftovers,” because it implies that you are serving food that should have been consumed the day before. If that definition were applied to all foods, we would be eating nothing BUT leftovers!

Prologue to the epilogue 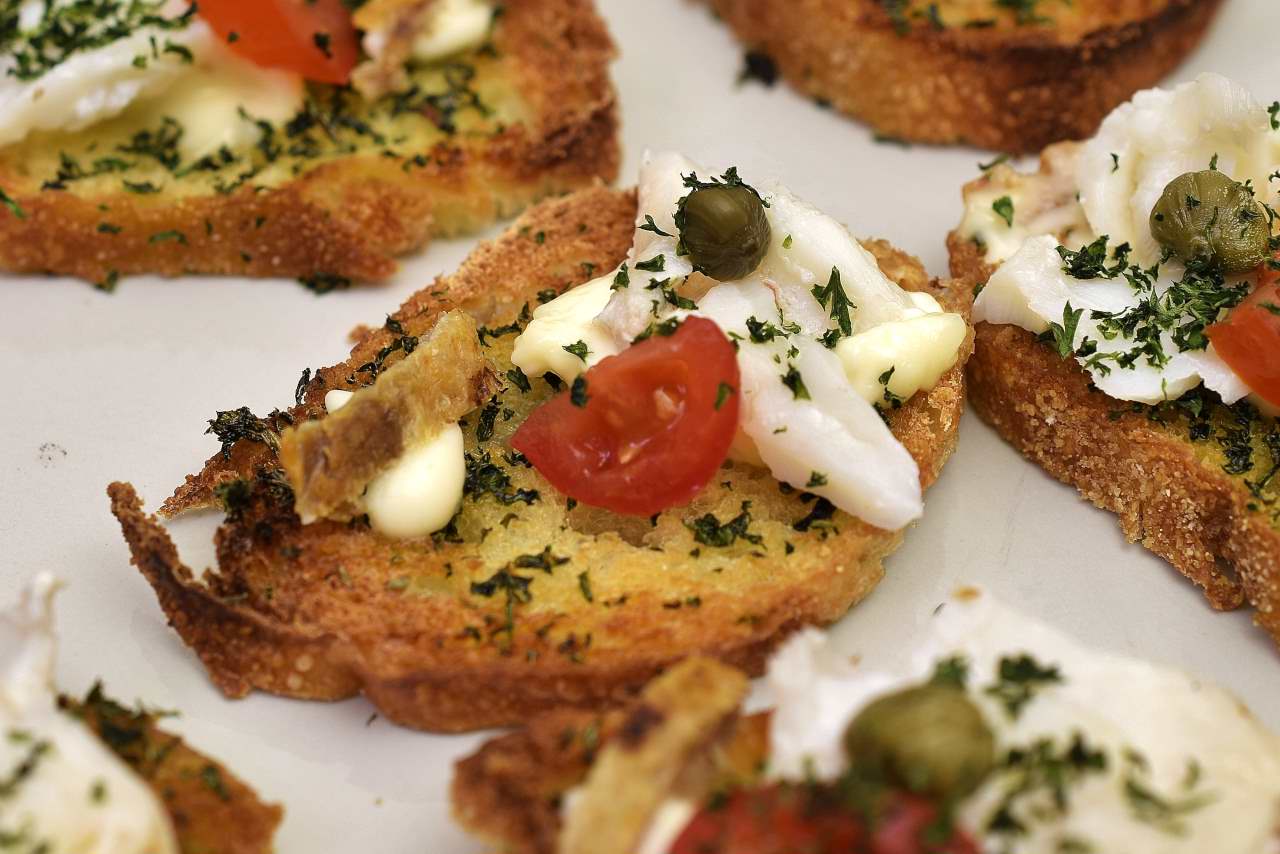 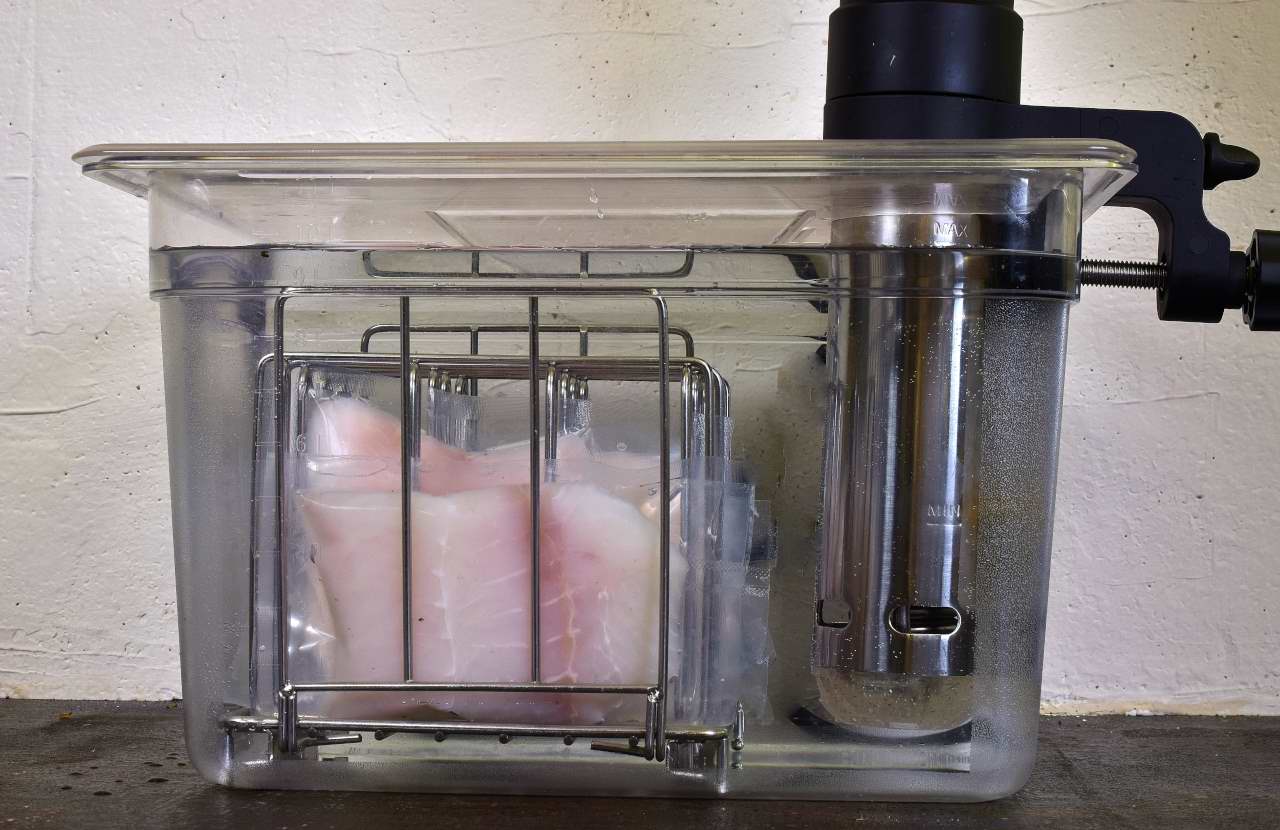 Stage the fish bones, carrots. celery and onions into a Ziploc gallon freezer bag. Add the 2 cups/450 ml sous jus (or water) to the bag but do not seal. Pinch the opening with your fingers and allow the Ziploc bag to slowly sink in the bath. Drape the sealing edge over the lip of the vessel. Hold in place with the lid. 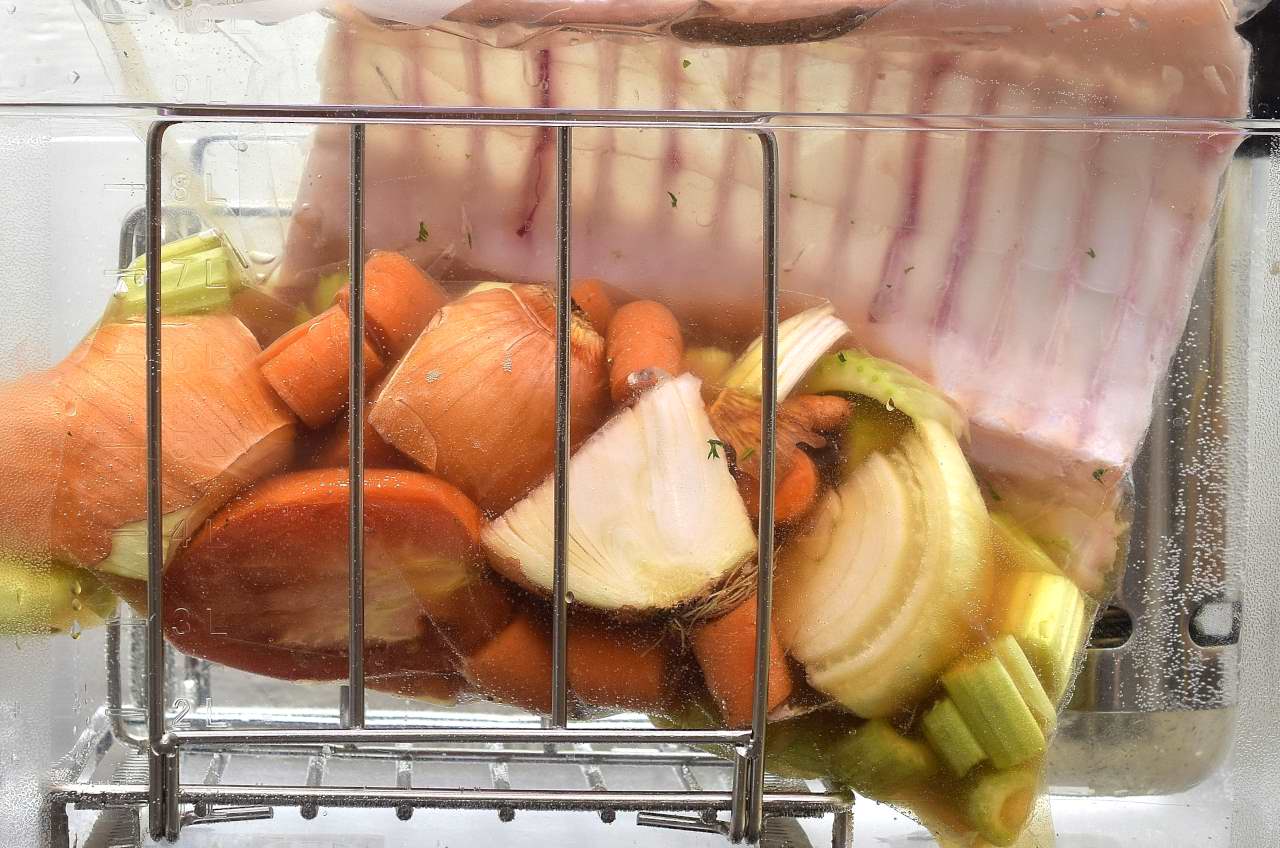 Process the stock at 183 F/84 C for two hours. When the time has elapsed, seal the bag and remove from the bath. Hold the bag over the sauce pot and use a pointed knife to cut a hole in one corner. Allow the stock to drain out of the bag and into the pot. Discard the bag with the bones and vegetables still in it. This saves a lot of mess. Set the stock aside for the time being. 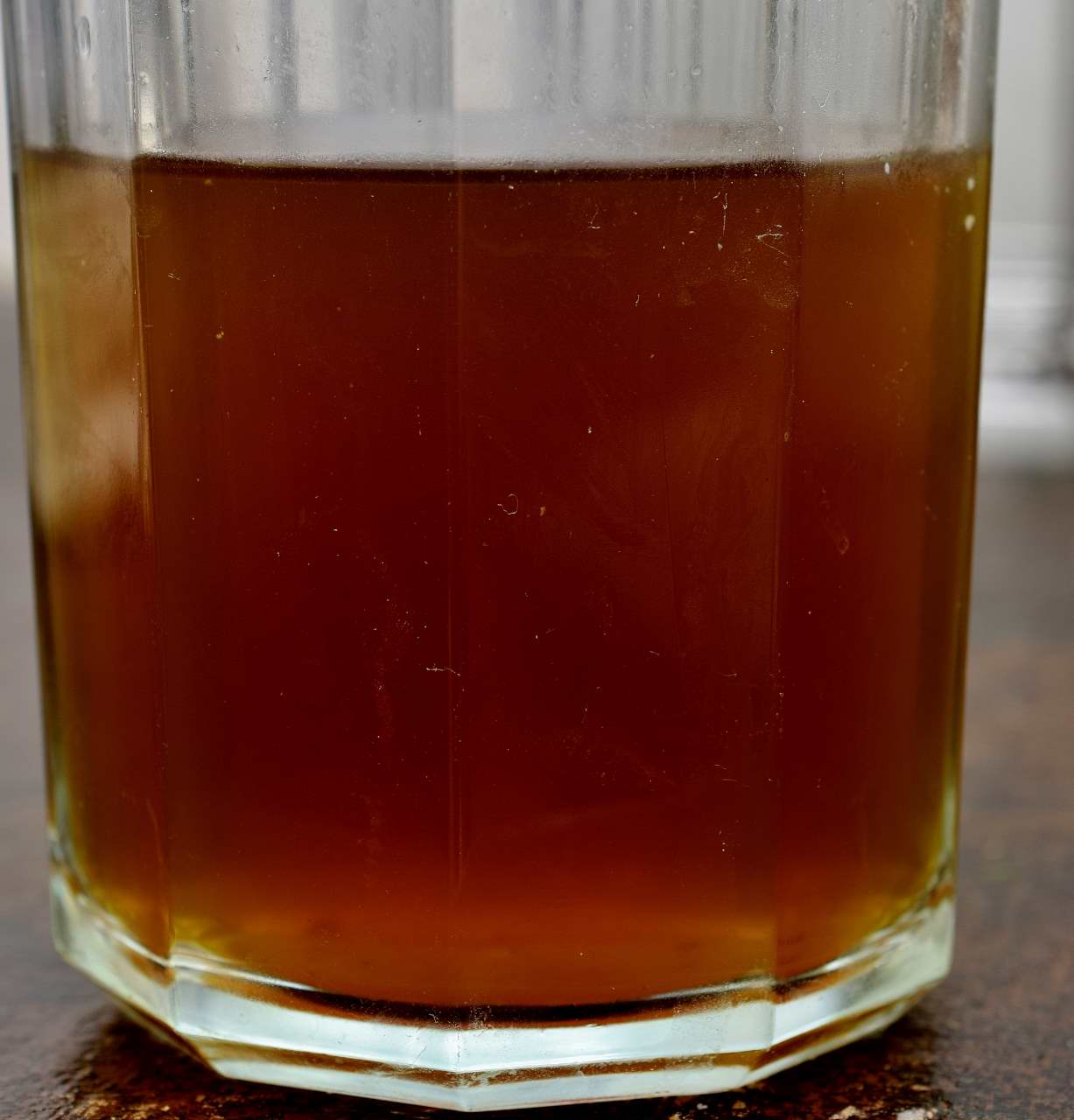 Making the most of skin

While you wait for the stock, use a long sharp knife to remove the skin from the halibut. Dip a paper towel in oil and lubricate the surface of the cold skillet. Lay the skin face down in the pan and put the steak weight or the sauce pot on top to keep it from curling up. Put the skillet on the burner and use medium heat to achieve approximately 250 F/121 C. Listen for sizzling, which will then fade somewhat as the moisture in the skin dissipates. Check the skin to make sure it is crisp, turn over and apply the weight for a few seconds. Remove from the pan. Turn off the pan, but do not wash. Cut the skin into small uniform squares. Set aside. 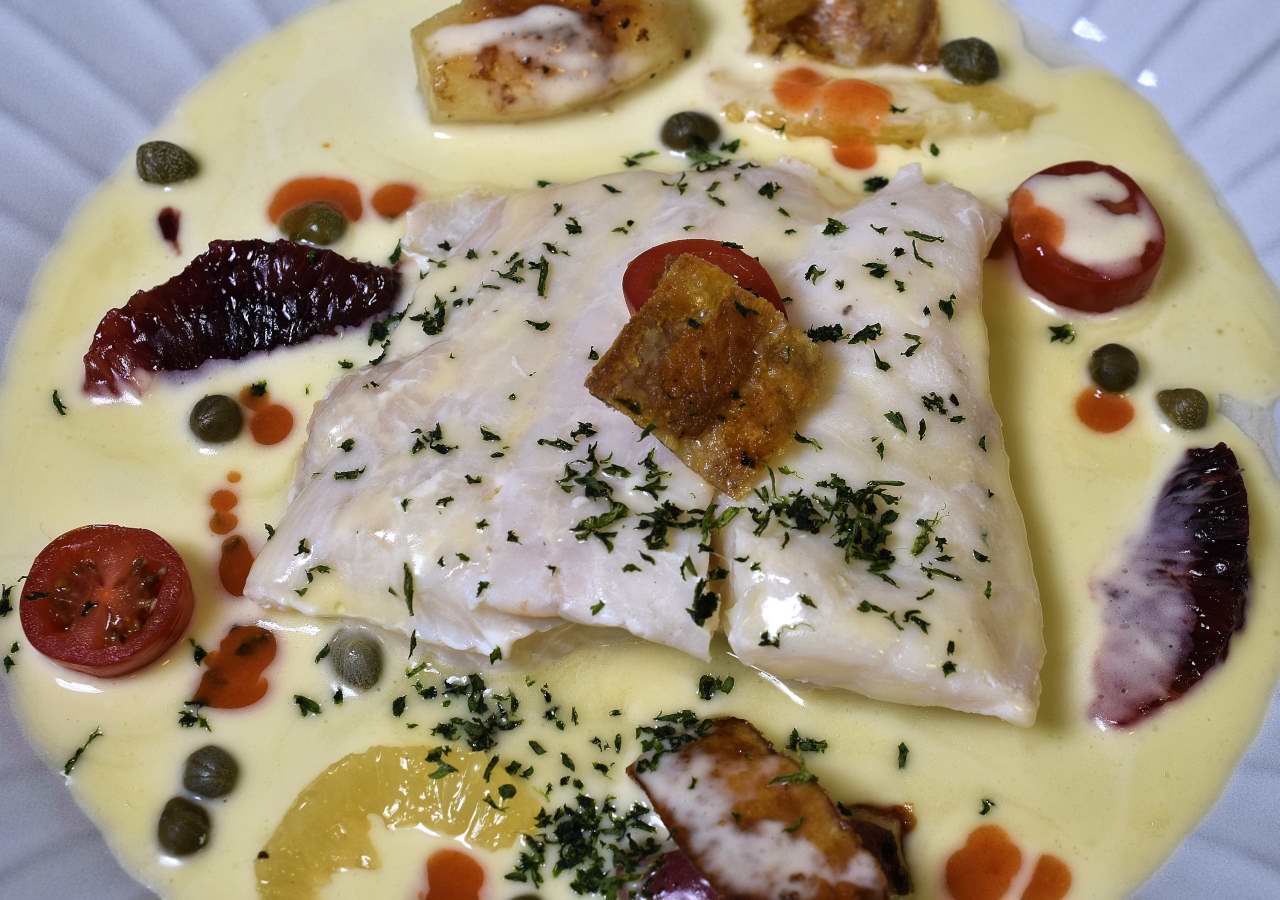 Cut the potatoes into bite sized pieces. I “turn” them and create particular shapes but they need only be bite sized to be suitable. Do not put the potatoes in water. Heat the skillet to 250 F/121 C. Sprinkle the potatoes with kosher salt and ground pepper. Spray the pan with PAM or wipe with a paper towel dipped in oil. Lay the potatoes in the pan and reduce the heat to medium low. Do not move the potatoes for at least five minutes or they may stick. Rotate to another side and repeat the process until they are well browned and done. 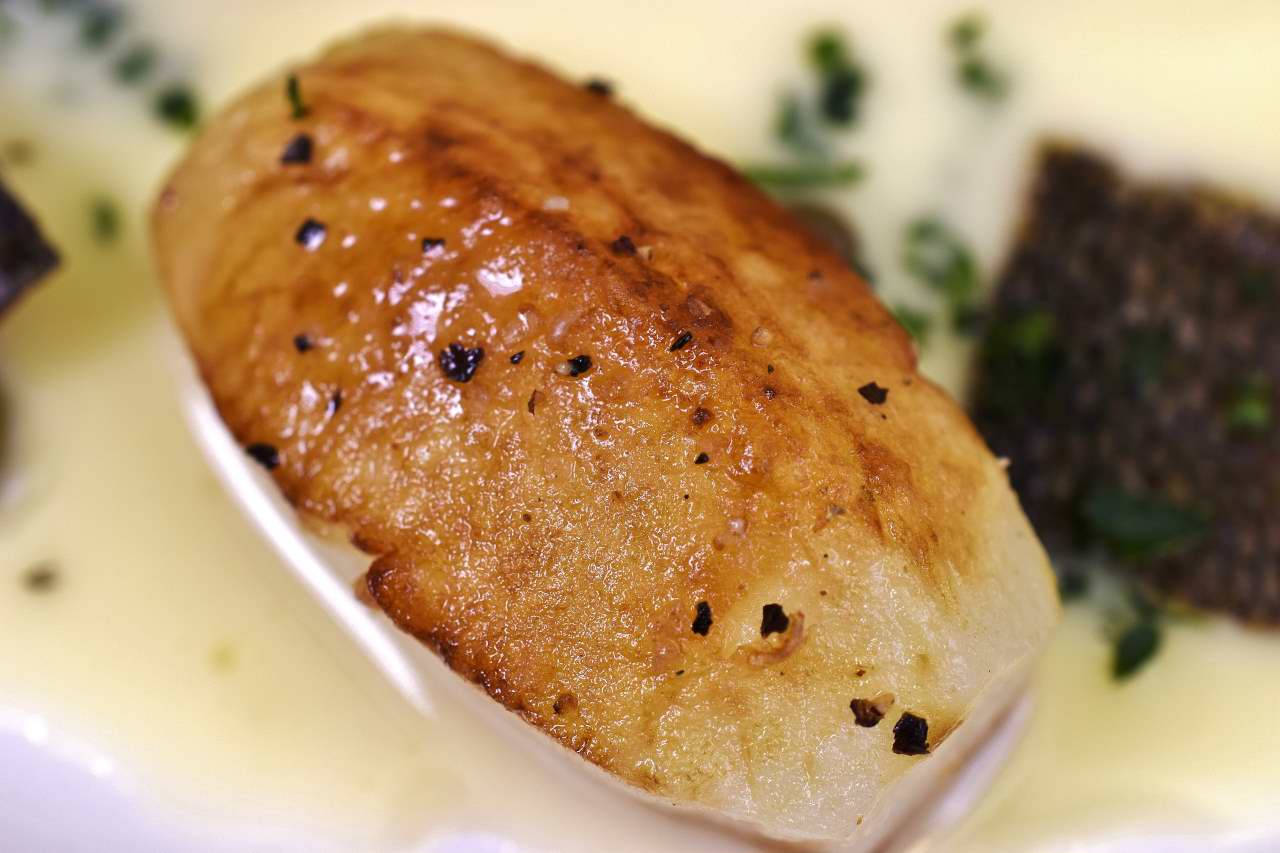 Turn off the burner–leave the potatoes in the pan. 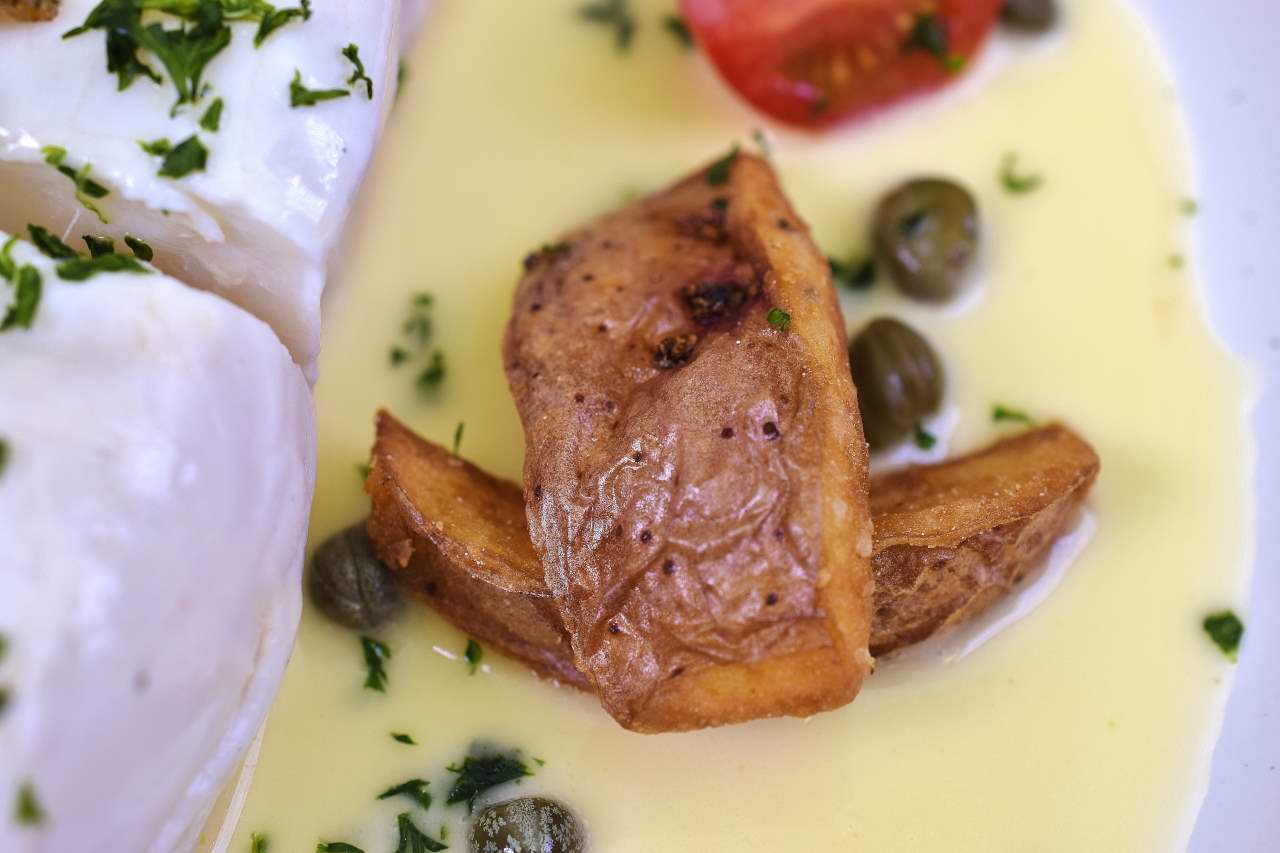 Peel the lemon and cut wedges from in between the membranes. Again, this requires some precision but is not essential–neatly cut small pieces is sufficient. Set aside. Cut the grape tomatoes in half, sprinkle with salt and pepper, set aside with the lemons. 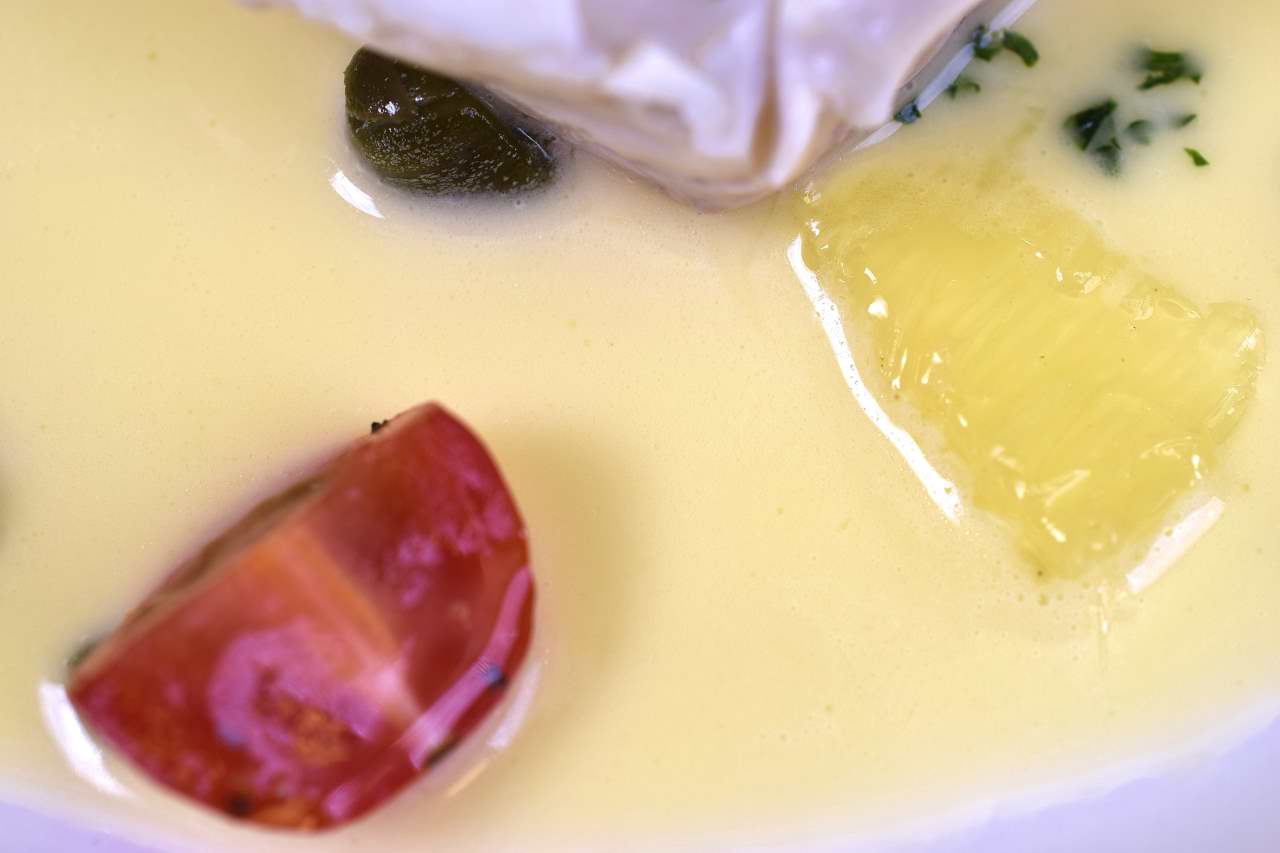 Turn the oven on to the warming function–anywhere between 170 F/77 C and 225 F/107 C. Heat the plates in the oven–I almost always heat plates, as do many restaurants. It is a form of insurance to insulate the kitchen against slow transport to the dining room.

Add 2 oz/60 ml of the halibut stock to the measuring cup. Add the 7 oz/190 g butter, the kosher salt, the lemon juice, the gelatin powder and the sodium alginate (optional). Process in the microwave until the butter melts–the liquid contents should be approximately 160 F/71 C. If the microwave runs too long, the butter may pop and spray. Watch and remove the cup as soon as the butter is fully melted. Don’t worry, you will not be blinded or sterilized by looking through the microwave window. If that could happen, there would be a lot of blind eunuchs in our midst.

Now that we’ve settled that

Remove the cup from the microwave oven and set on a counter. You will see gelatin and alginate floating on the top–that is expected. Insert the stick blender ALL THE WAY TO THE BOTTOM of the cup–do not lift up under any circumstances. Pulse the stick blender until the butter on top has been pulled into the stock and lemon juice below. Stage into the squirt bottle and set aside.

You want me to WHAT?

Note: at first,this next step may seem to contradict the basic principles of sous vide. Typically, sous vide utilizes low temperatures to tenderize proteins and to minimize shrinkage and moisture loss. In the case of fish, tenderization is rarely an issue–in fact, care must be taken to avoid causing the protein to disassemble through overcooking. Similarly, shrinkage and moisture loss in fish is barely detectable unless the fish is cooked too LONG.

For this reason, we used a temperature so high that it is rarely applied in sous vide except to vegetables and starches who will not denature without it. The hope is that the high temperature and the acetic acid in the bag will actually cause the fish proteins to “clinch” rather than to disintegrate. One way or the other, the fish should not need more than 10-15 minutes to achieve flaking doneness. 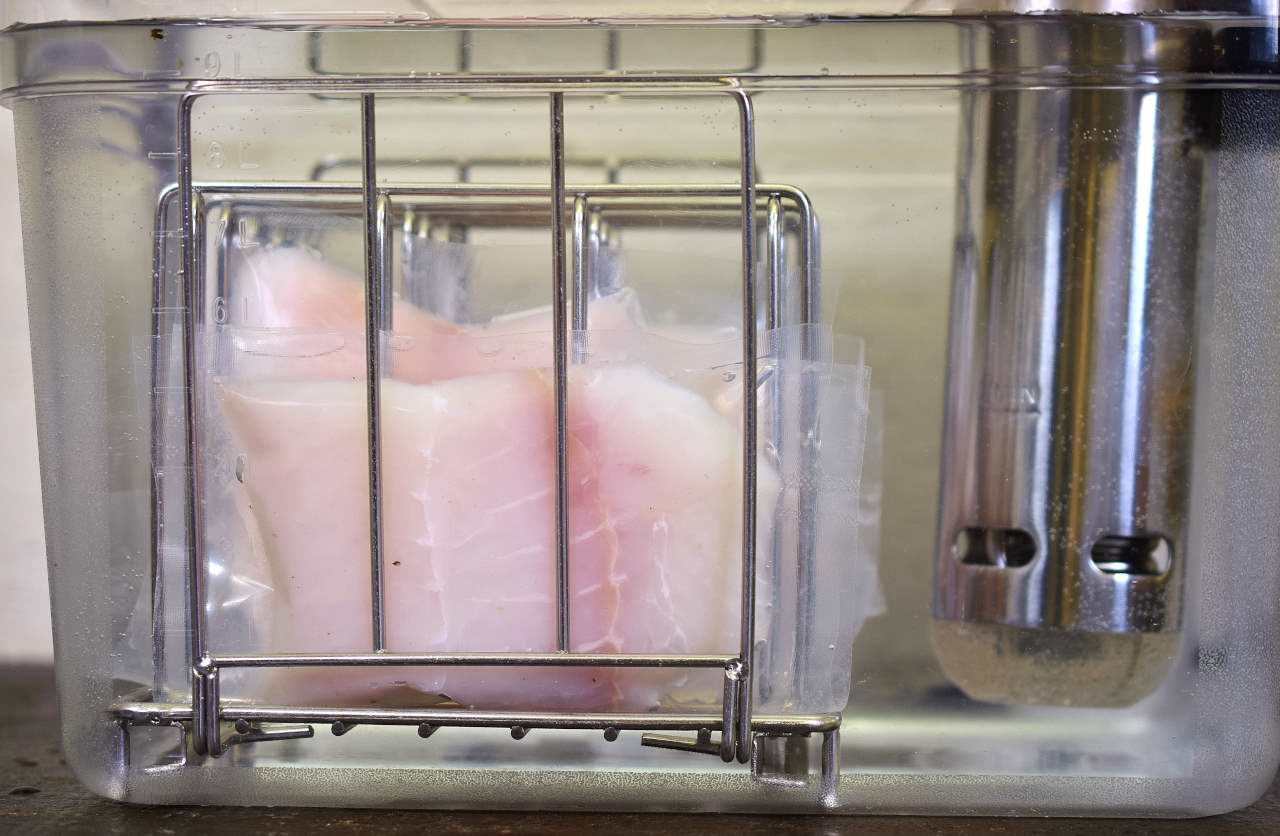 Lightly salt the halibut if desired. Stage the pieces of halibut into individual bags with 1 oz/30 ml vinegar in each bag. Put the bags in the 183 F/84 C sous vide bath and TURN IT OFF. Return in 10 minutes, remove the pouches from the bath and set on the counter.

Remove the plates from the oven and set on a flat work surface. Drizzle with a little of the butter sauce so the fish is not sitting on a dry hot plate. 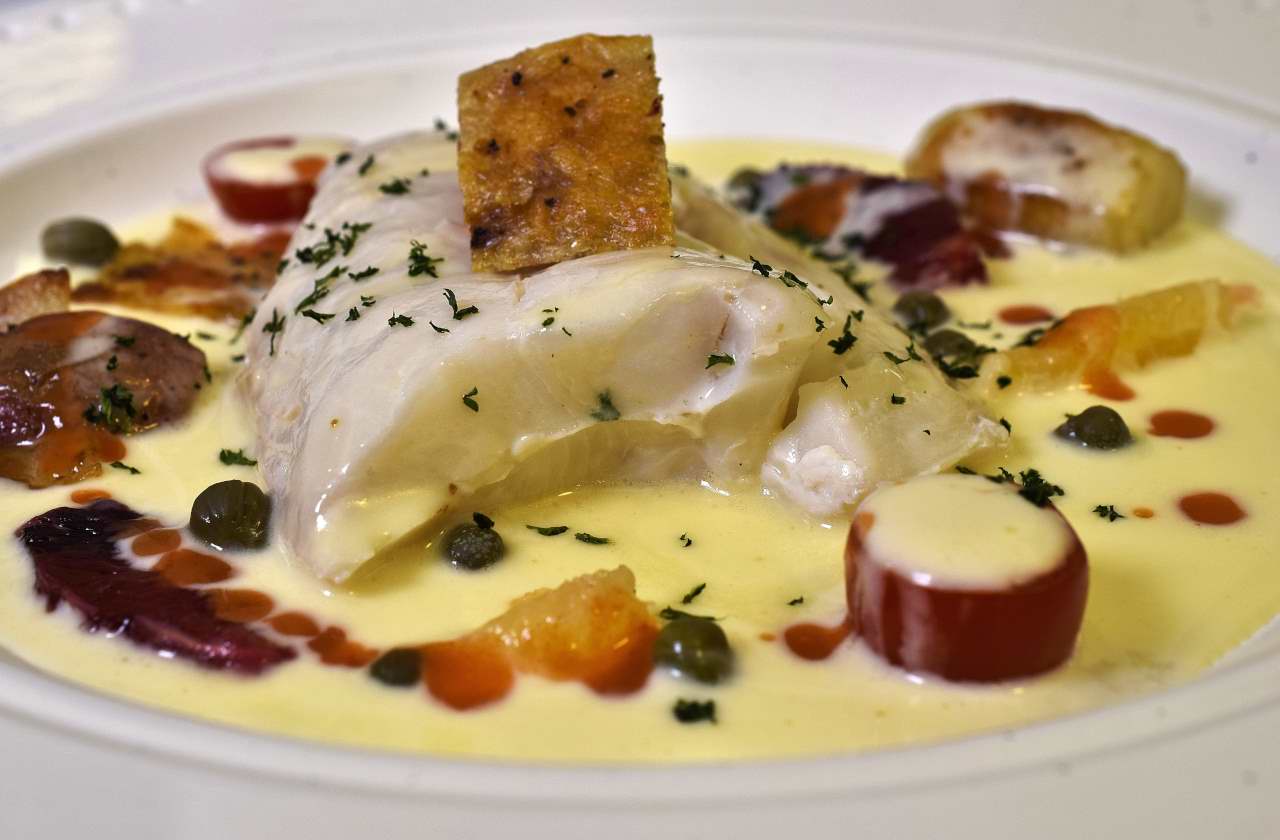 Place the fish in the center of the plate. Sprinkle the plates with capers and drizzle the butter sauce over the fish and the plate until it is adequately covered. Drizzle with the pepper vinegar sauce (optional). 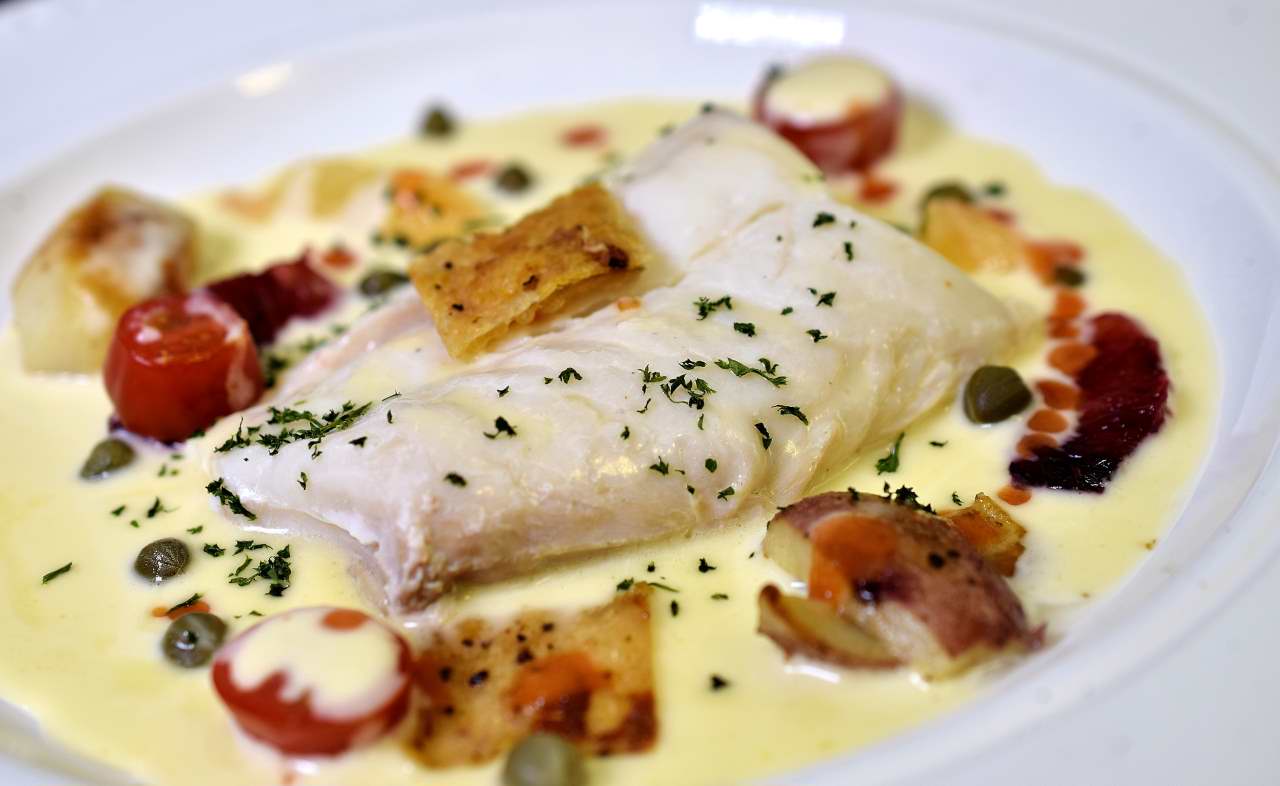 Arrange the potatoes, tomatoes, lemons and halibut skin on the plate. Decorate the top of the fish with tomato, lemon, and skin. 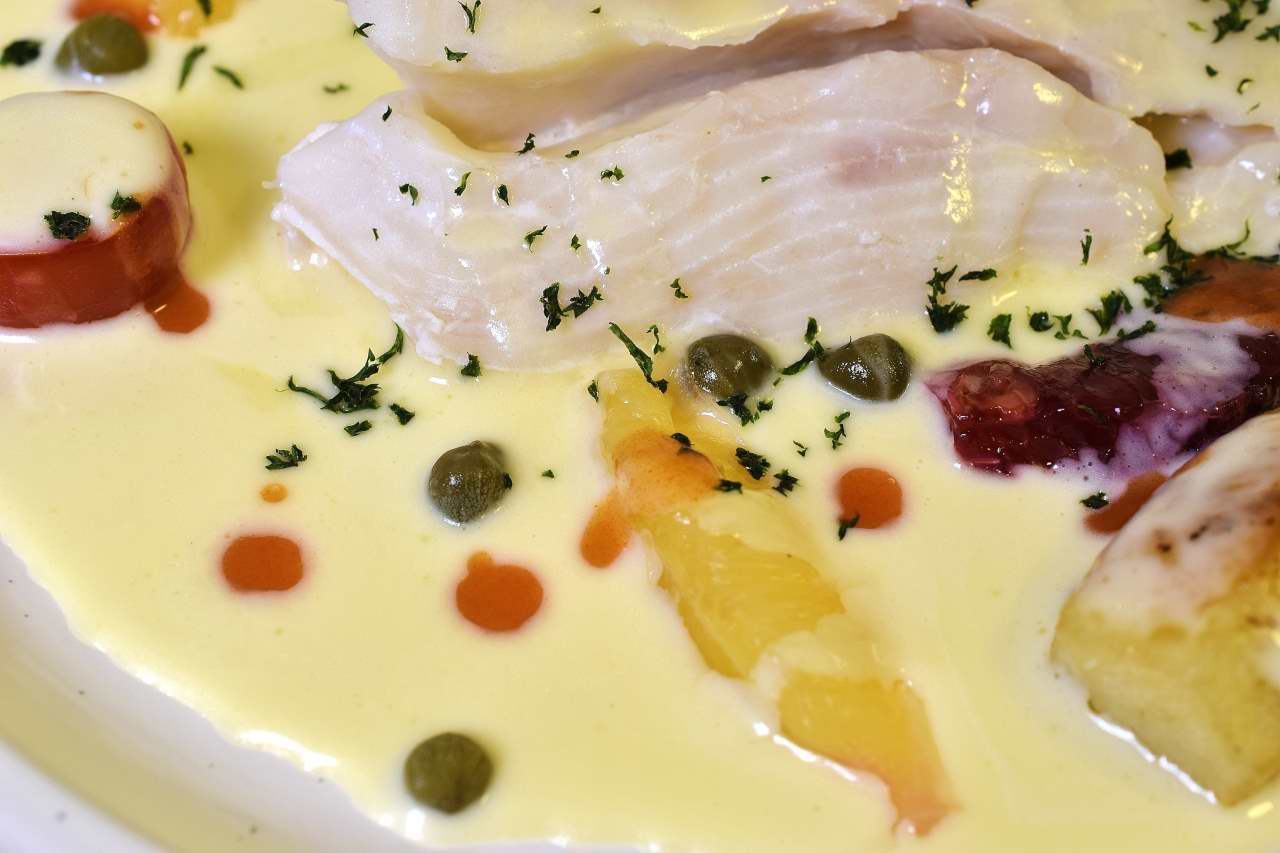 Sprinkle with the chopped parsley. 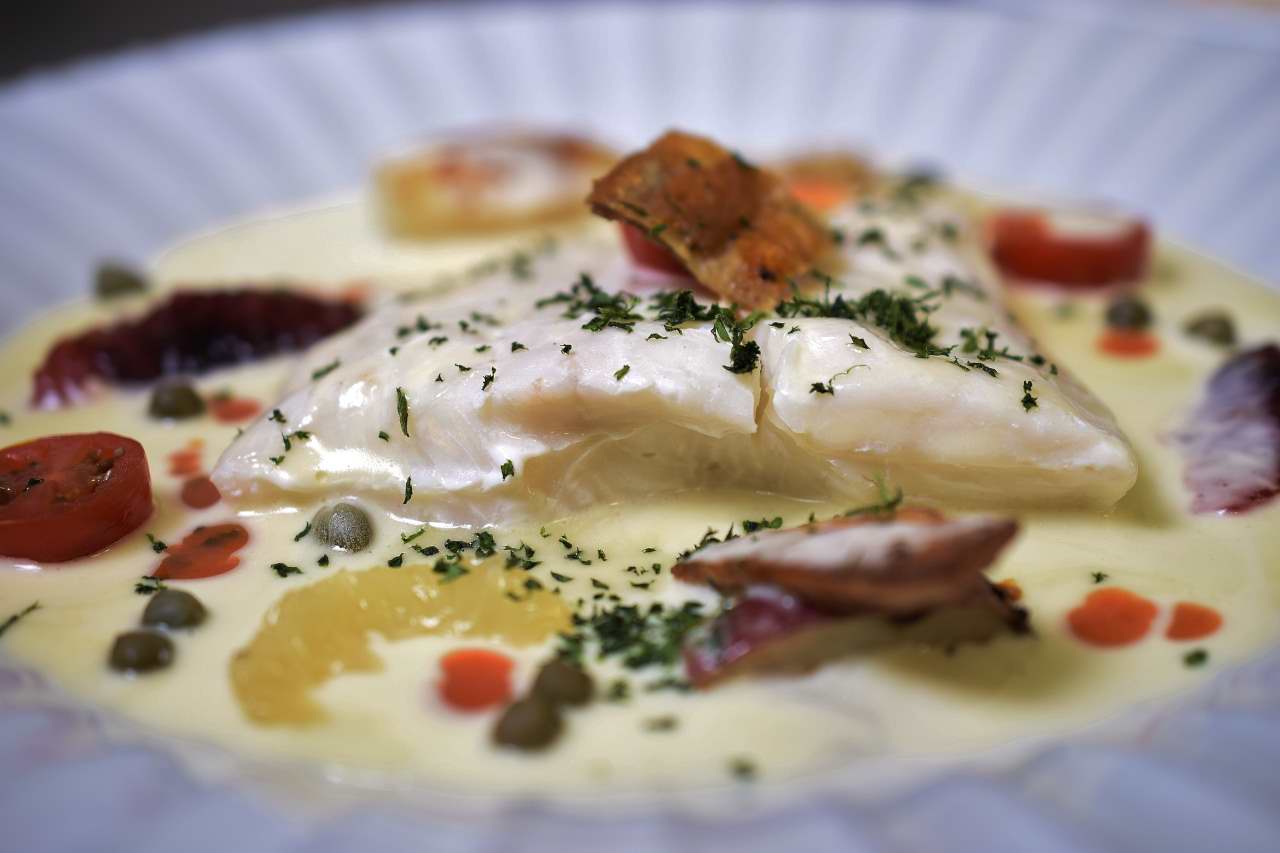 Just a few treats to avoid making a full on Sunday meal. 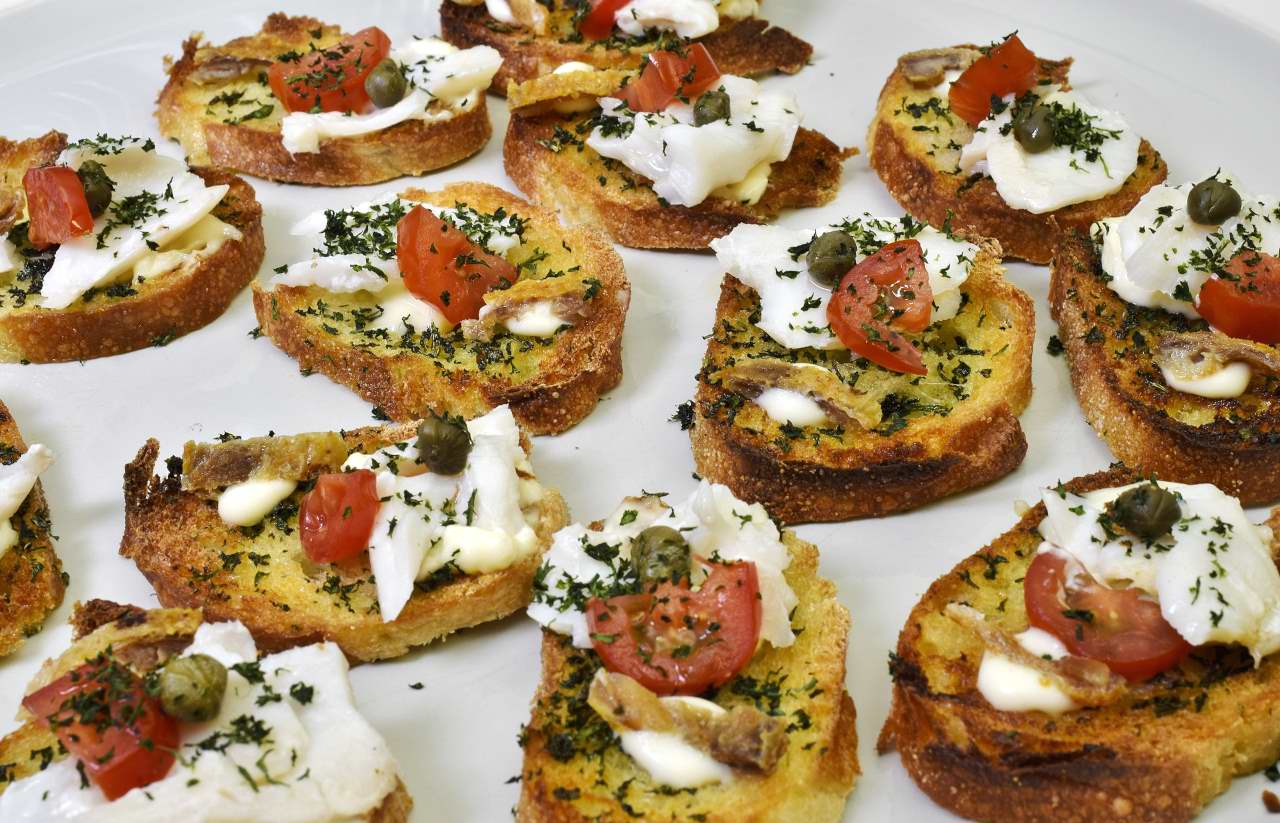 By the time I got drawn in to the food industry, gardemanger was already on life support, replaced by deli platters, nachos and spicy wings. For better or for worse, I was always fascinated by the discipline and precision. 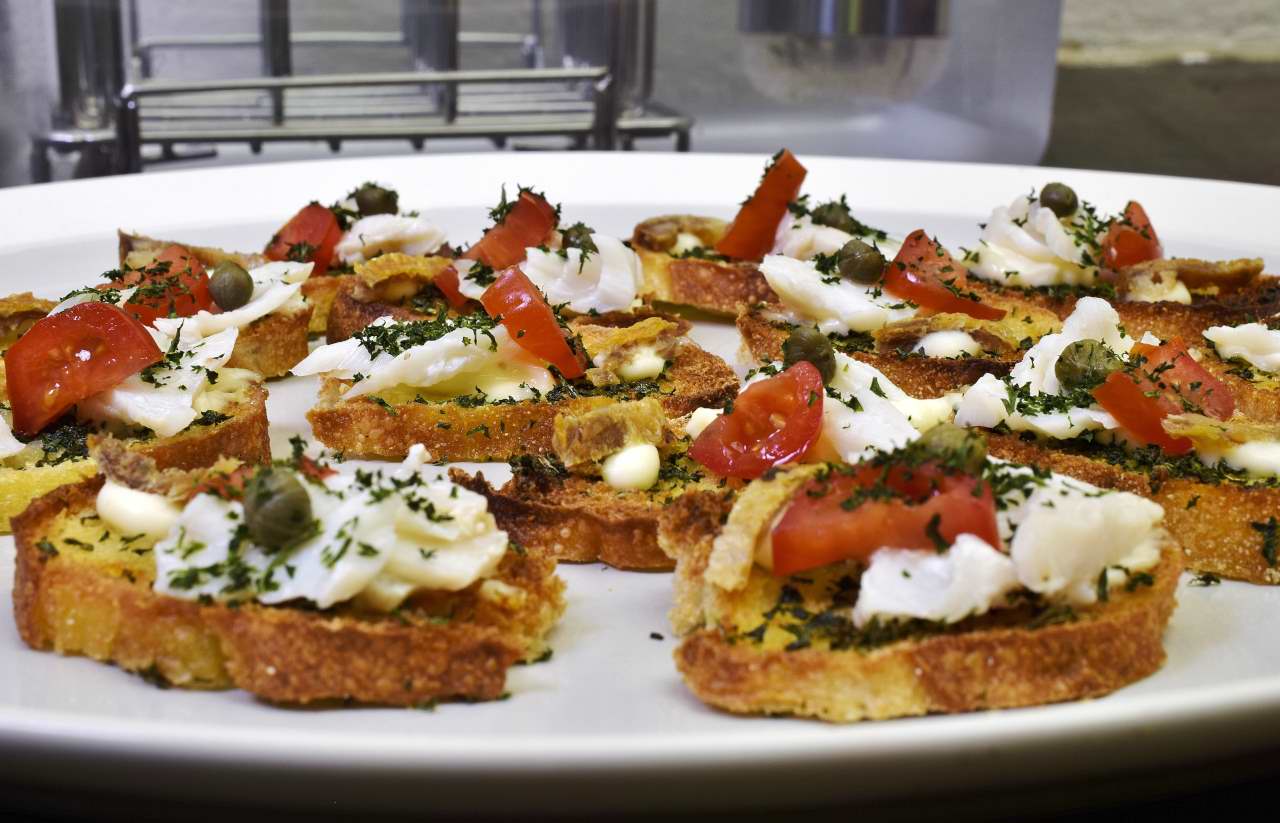 Once there were no fresh scrubbed apprentices willing to work for free rather than live in their parents’ basement, the cost of producing this sort of thing became unsustainable. Nowadays, we just go to the freezer and get the box.

Still pretty cool, and fun to make as long as you don’t have to do it all day, all week, all year. 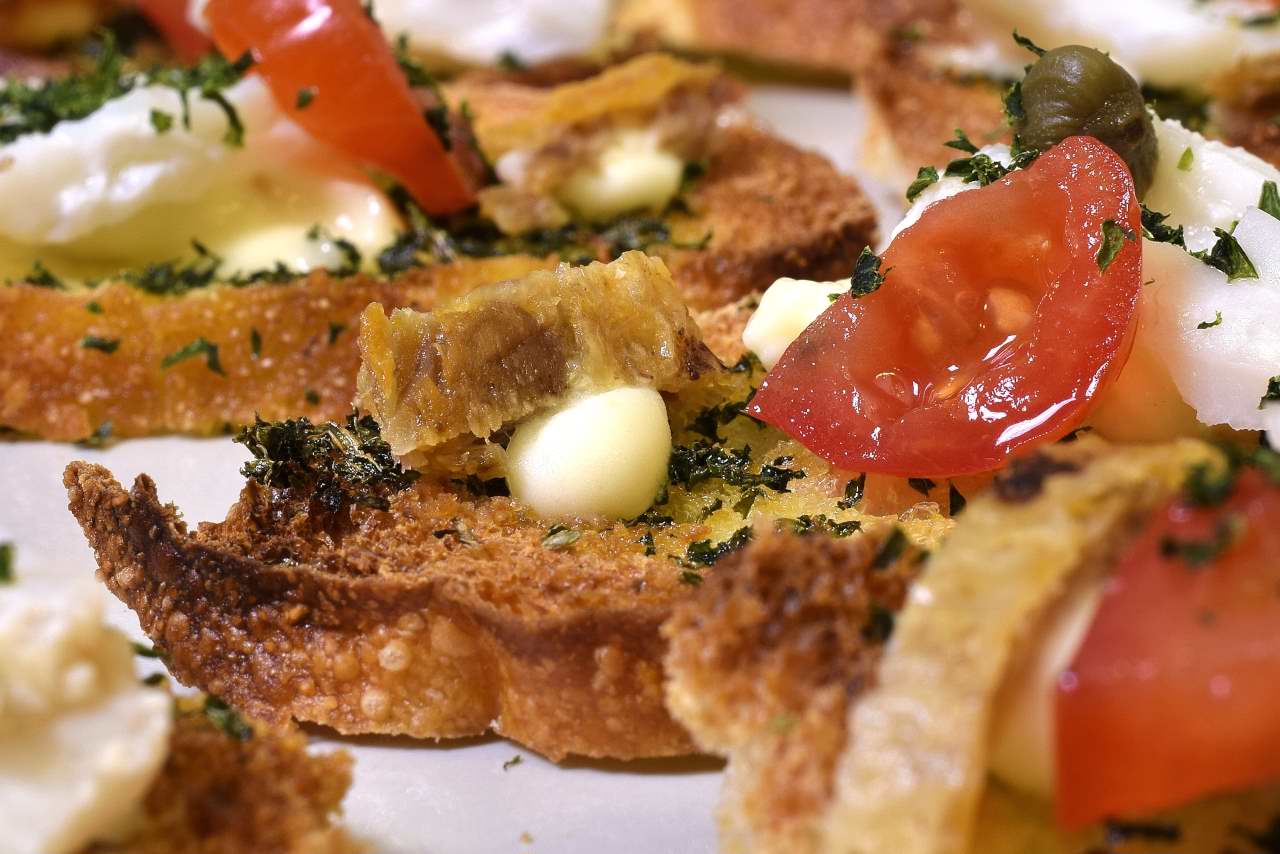 We may be better off if it doesn’t make a comeback. These are a lot of work.

There is no finer fish than halibut. Unfortunately, freshness is short lived; it does not freeze well. The season is short to protect the population from over-fishing. The price is 3-4 times higher than comparable seafood.

It is still hard to resist this amazingly white, delicate fish. Halibut are "flat"--they mostly lay on the bottom of the sea bed and wait for food to come to them. The are not discriminating as to what they eat, and yet somehow transform this random assortment of food overlooked by more active hunters into a flesh noted for its purity of flavor and texture.

Halibut is almost always over-cooked. We take an atypical sous vide approach to prevent that occurrence.