Many believe that this lean cut can be tenderized by marinating. Impossible to prove or disprove, sous vide renders the debate unnecessary. 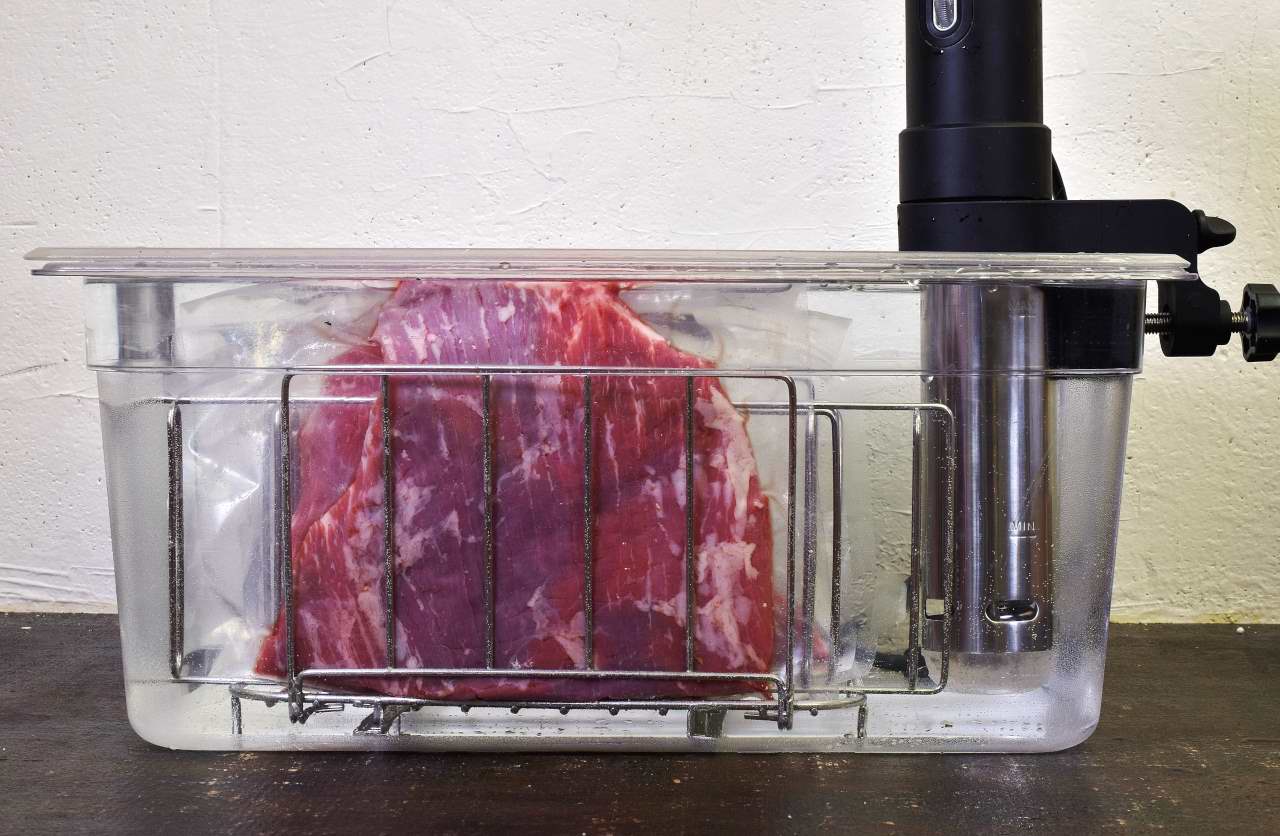 Seal the flank steak in heat rated sous vide bags and stage into the tank for
8 hours.

When your timer goes off, reduce the heat in the tank to 125 F/52 C. The steaks can be held at this temperature for up to 8 more hours without any noticeable degradation.

Make the mashed potatoes while you wait for the steak to process. If you have another sous vide bath, you can seal them in a bag and process at 183 F/84 C for 2 hours. Otherwise, put the potatoes in the sauce pot and cover completely with tap water. Bring to an actual boil and cook until a toothpick or point of a knife goes through them with no resistance.

Once they are done, drain the water and mash the potatoes. I prefer to rice them directly into a Ziploc quart bag. Add the salt, butter and cream. Do not seal the bag. Massage the bag to mix and stage into the bath with the flank steak. Drape the sealing strip of the bag over the container’s edge and secure with the lid. 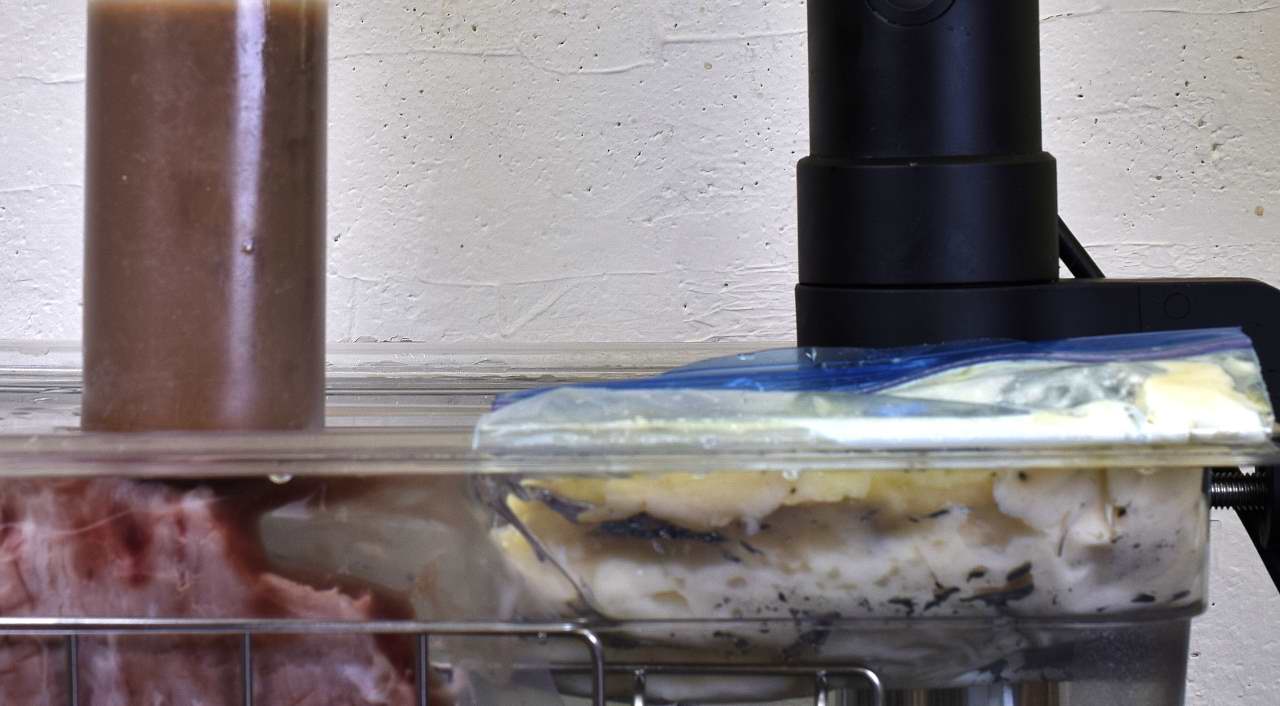 Heat the brown sauce/demi-glace to 165 F/74 C and transfer to a squirt bottle. Set on top of the lid to the sous vide bath.

Lay a piece of asparagus on the work space. Gently hold the tip while you pull a vegetable peeler towards the root end of the asparagus. Continue working your way around the stalk until most of the tough skin is removed. 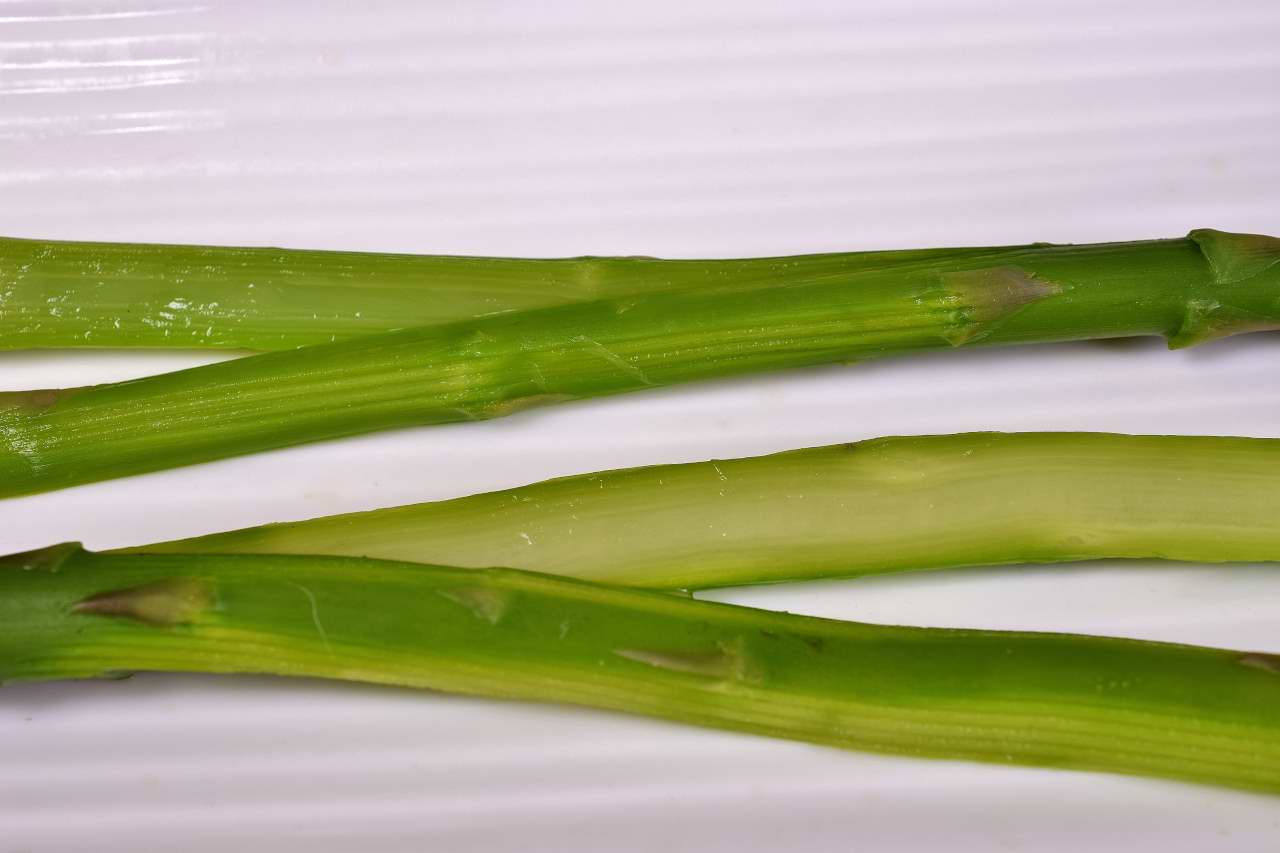 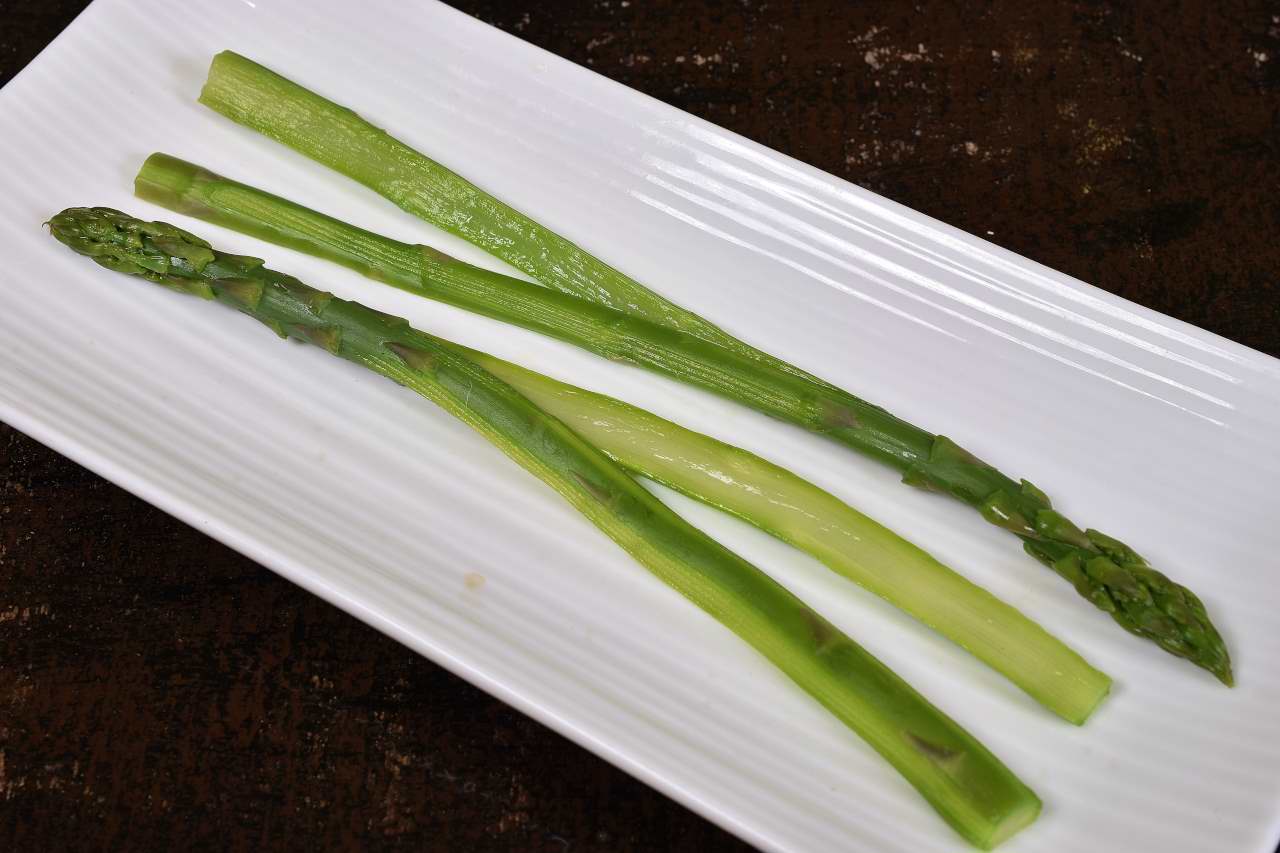 Again, holding the tip, use a paring knife to split the rest of the stalk all the way to the end. 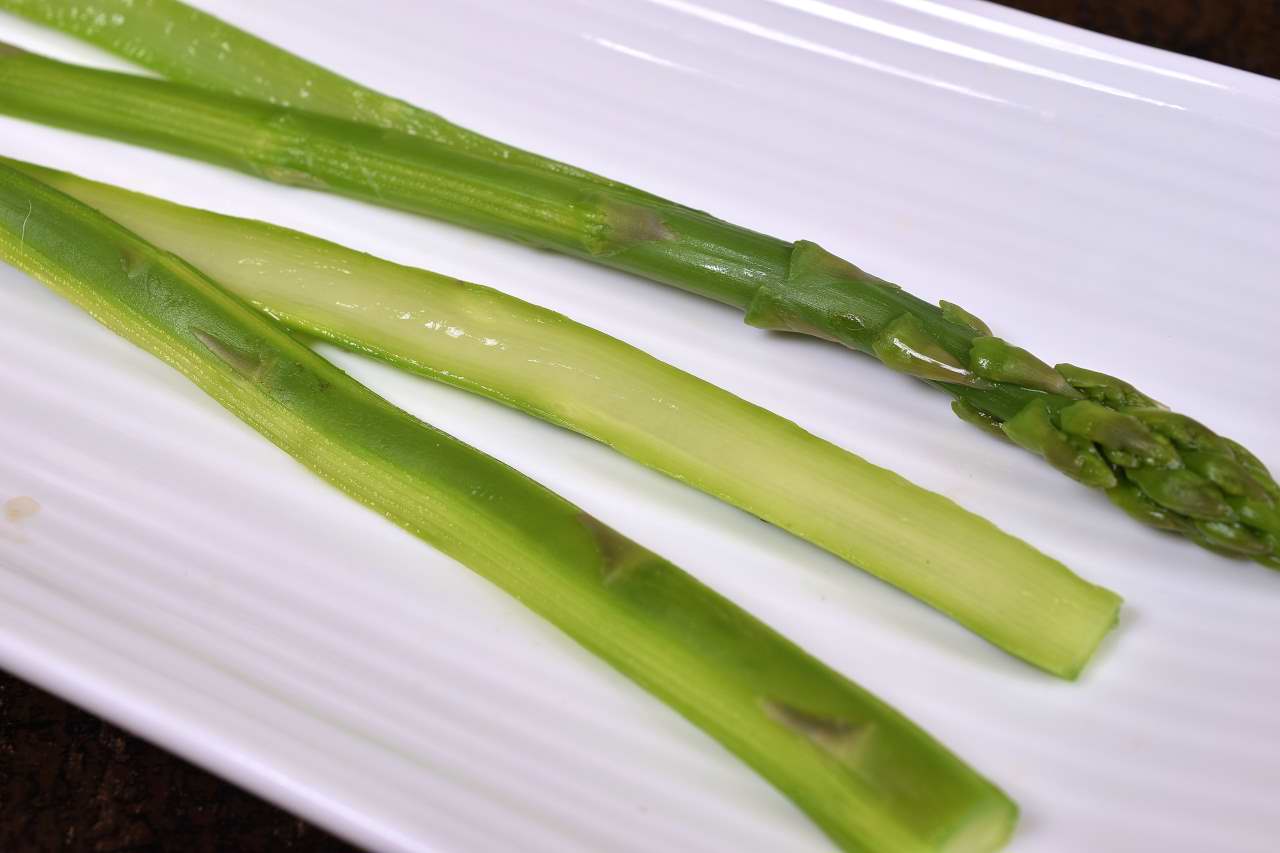 Separate the white from one egg, put a few drops of cold water on top of the yolk and stage into the refrigerator–find a recipe for aioli that you like and make it or add it to your pancake batter in the morning. Beat the egg white vigorously with a fork and set aside.

Remove the steak(s) from the bath. Hold the bag over a measuring cup and cut one of the corners open to drain the juices. Refrigerate for later processing. Line a sheet pan with parchment or butcher paper. Finish removing the steak from the bag, pat dry with a paper towel and lay on the parchment. 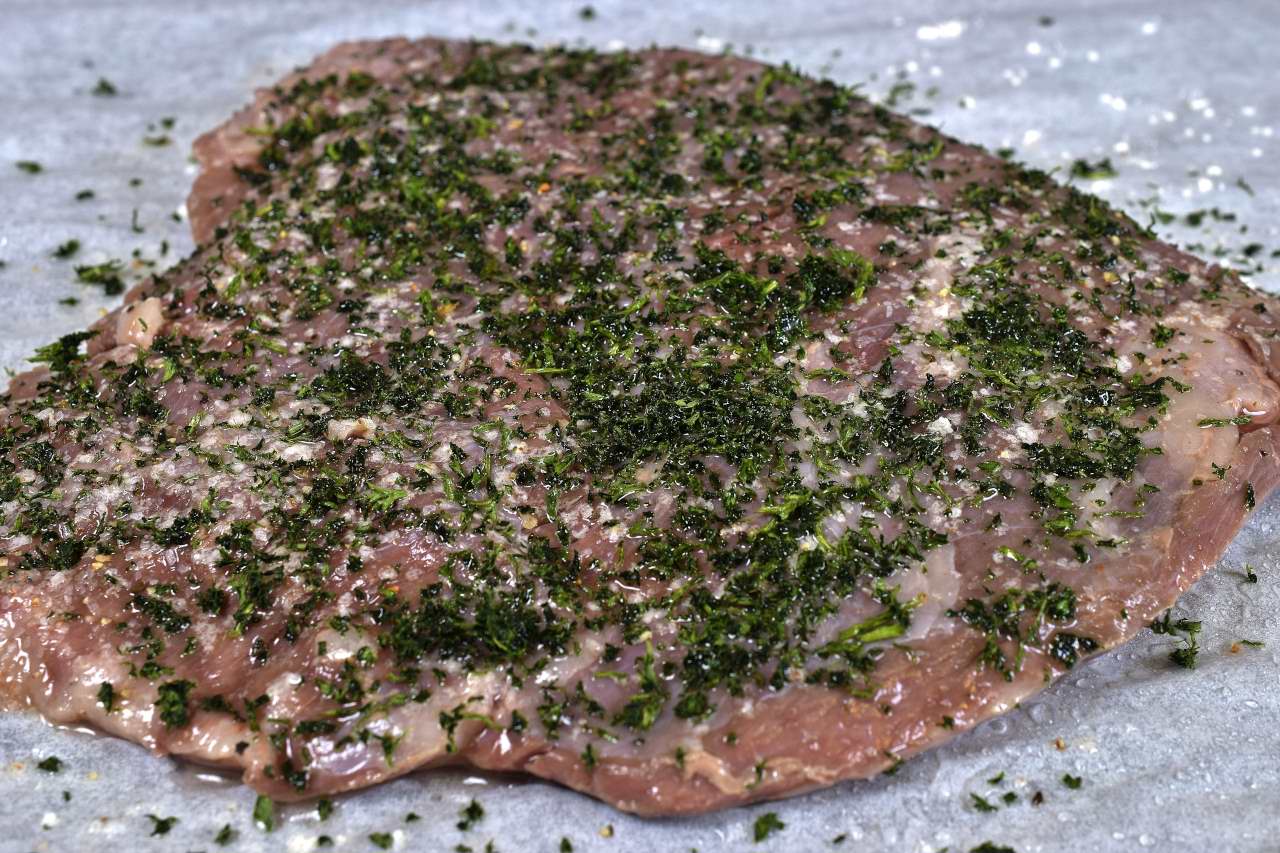 Smear or paint one side of the meat with the egg white and sprinkle with 1 teaspoon of salt, ground black pepper and the parsley. 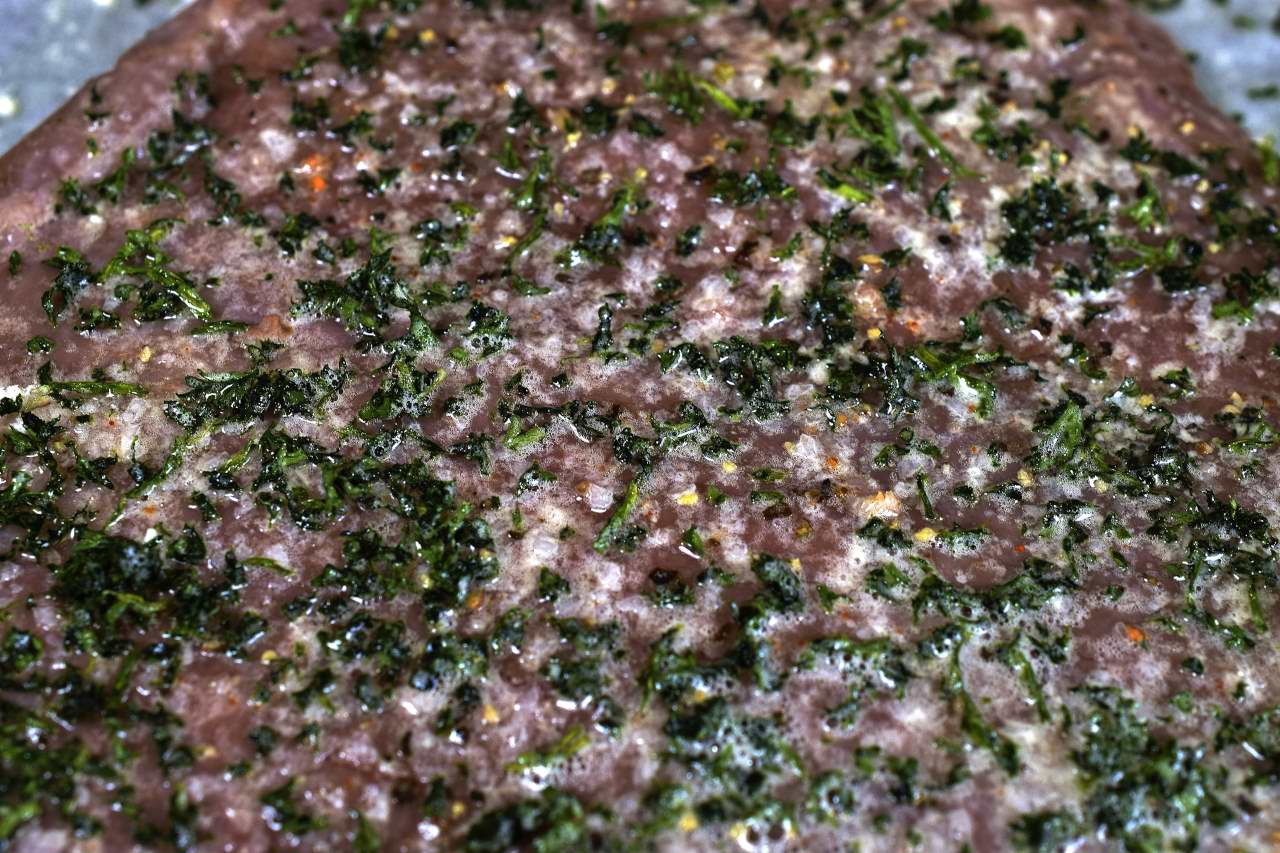 Turn the steak over and repeat the process with the other side. Wrap the steak up with the butcher paper and set aside for a few minutes to give the coating time to cling. 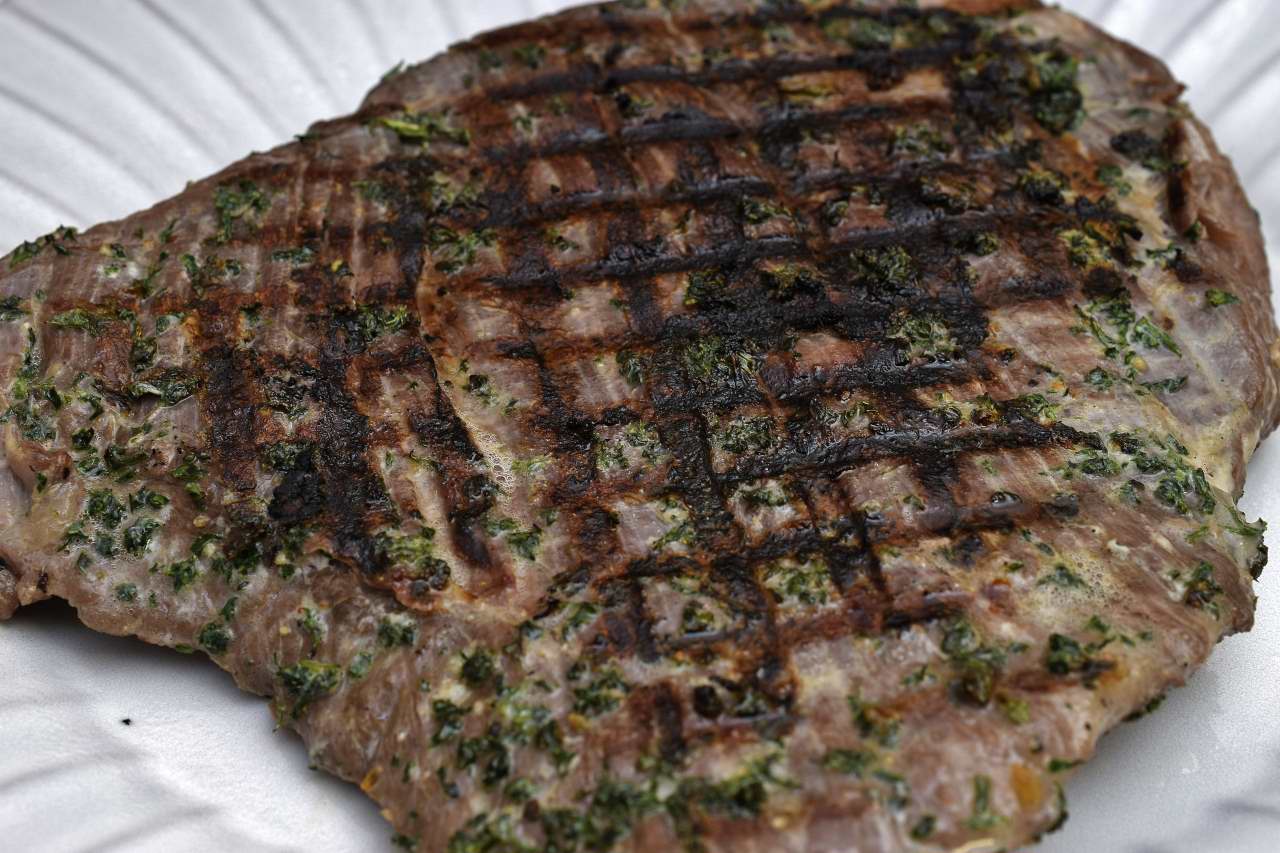 Heat the cast iron grill pan to approximately 400 F/200 C. Dip a paper towel in oil and wipe the grates. Sear the flank steak, turning ninety degrees after approximately thirty seconds. Turn over and repeat the process. Turn off the burner, remove the steak from the pan and stage to the parchment. 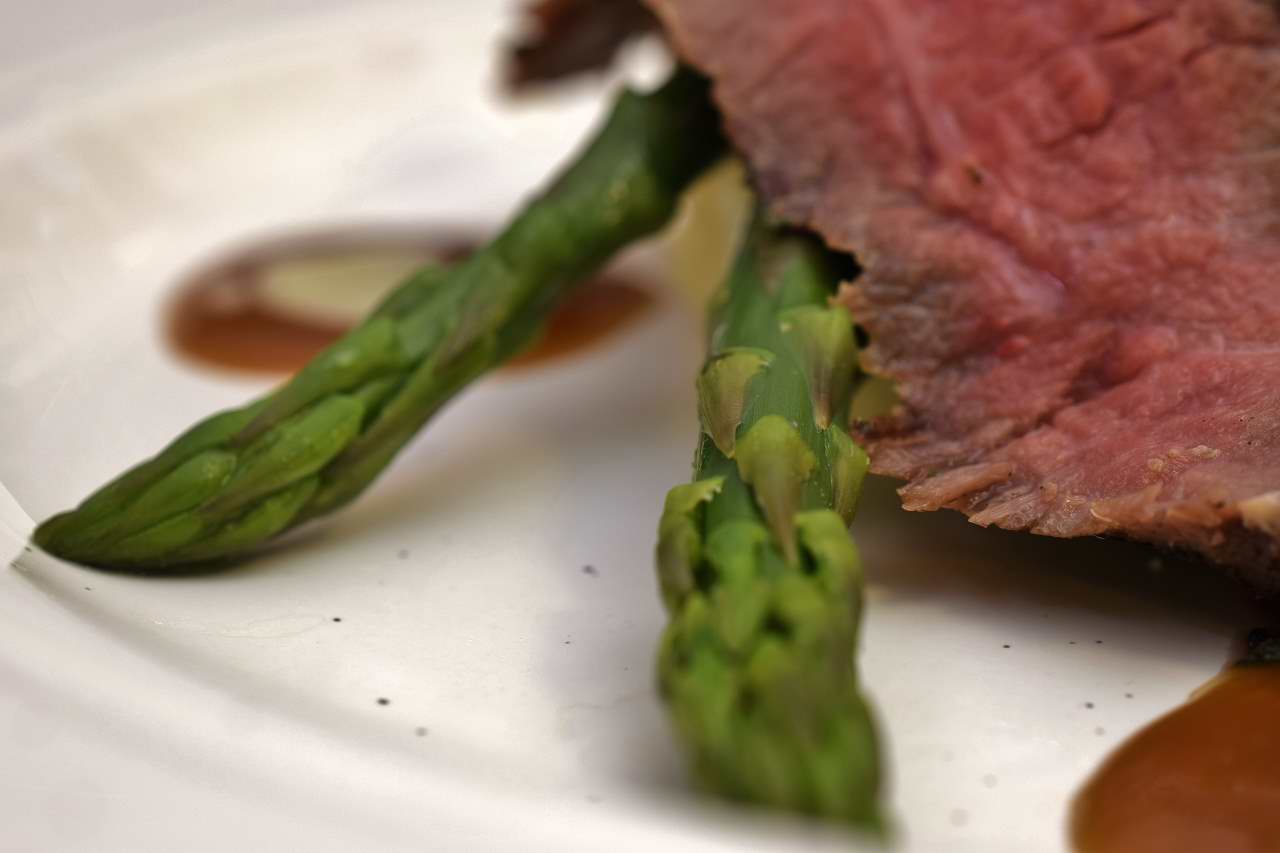 If you use a regular skillet instead of cast-iron, 300 F/150 C is plenty hot. Using a little bit more oil, you get an effect more like this. 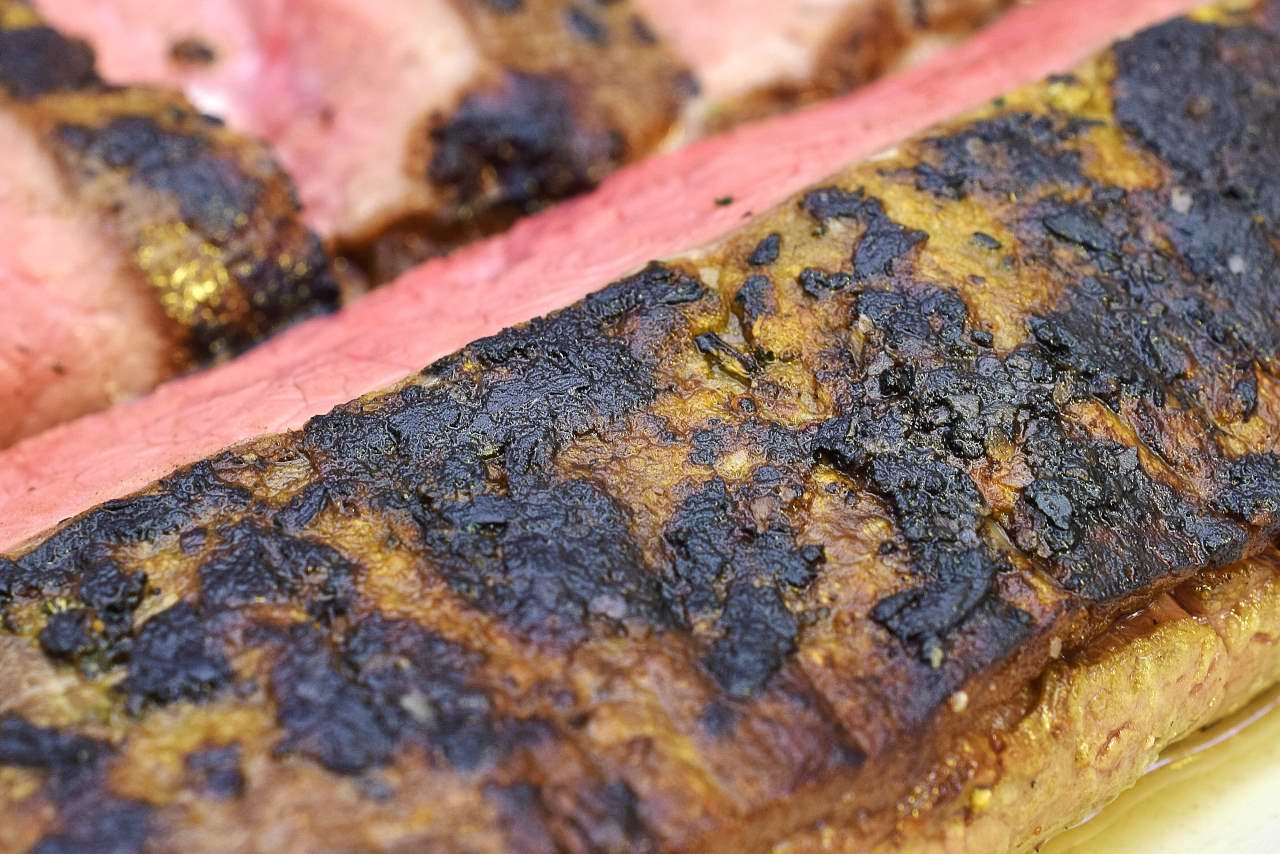 There is a certain amount of mythology and even one-up-man-ship when it comes to searing temperatures. Some people still believe that searing seals in the meat’s juices, even though, again, serious scientific study strongly contradicts this notion.

Occasionally I hear enthusiasts gleefully exclaiming that they have an out-door searing rig that will achieve 650 F/340 C. Of course, that rig HAS to be outside because their spouses object to the hellacious volcanic fumes emitted when this kind of heat comes in contact with flesh. Something else to keep in mind: an open flame at such temperatures does not achieve the same amount of caramelization as a heated surface.

I do not find the color of the crust in the picture above to be objectionable, but I certainly wouldn’t want it to be any darker than that. Some people may be surprised to learn that the stainless steel pan used was a mere 300 F/150 C. How much oil, or rather how little oil used has as much to do with results as the heat itself. 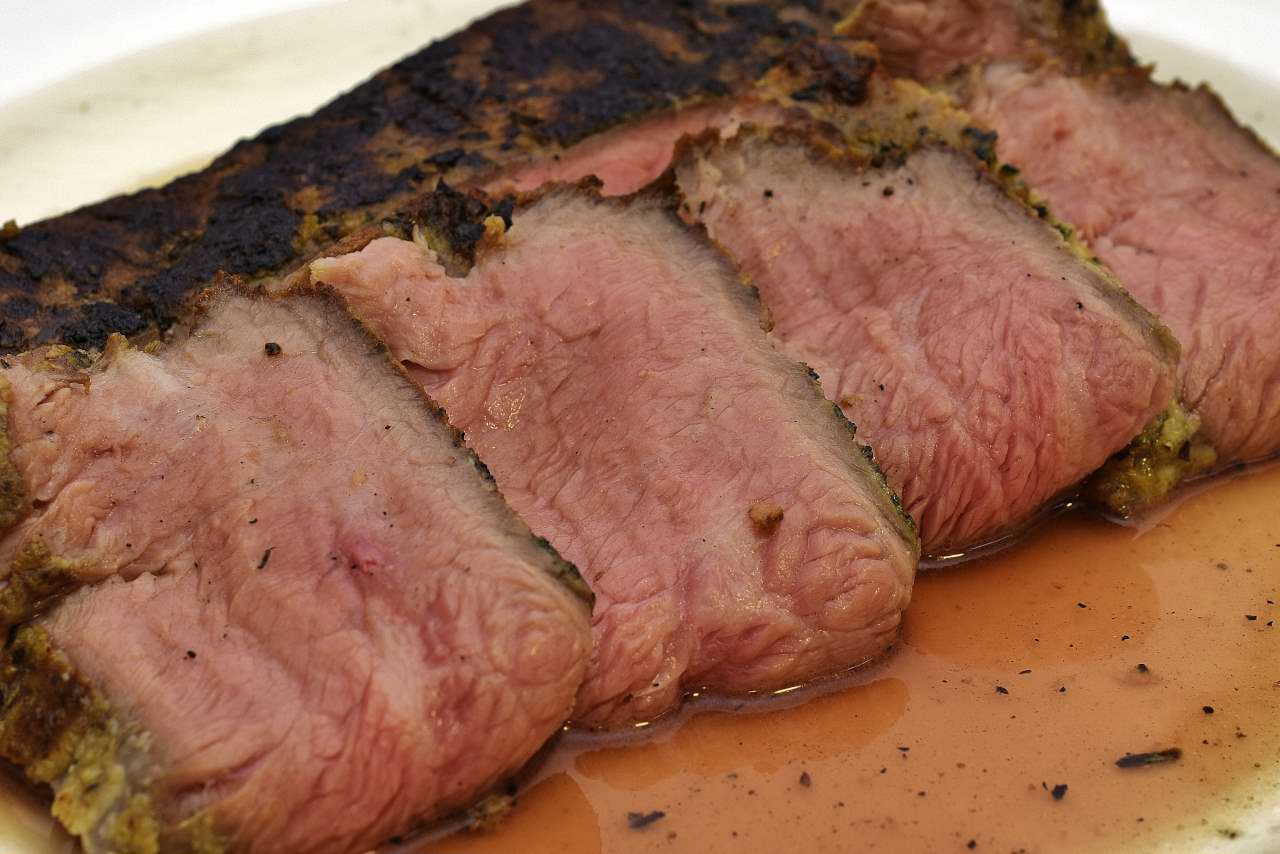 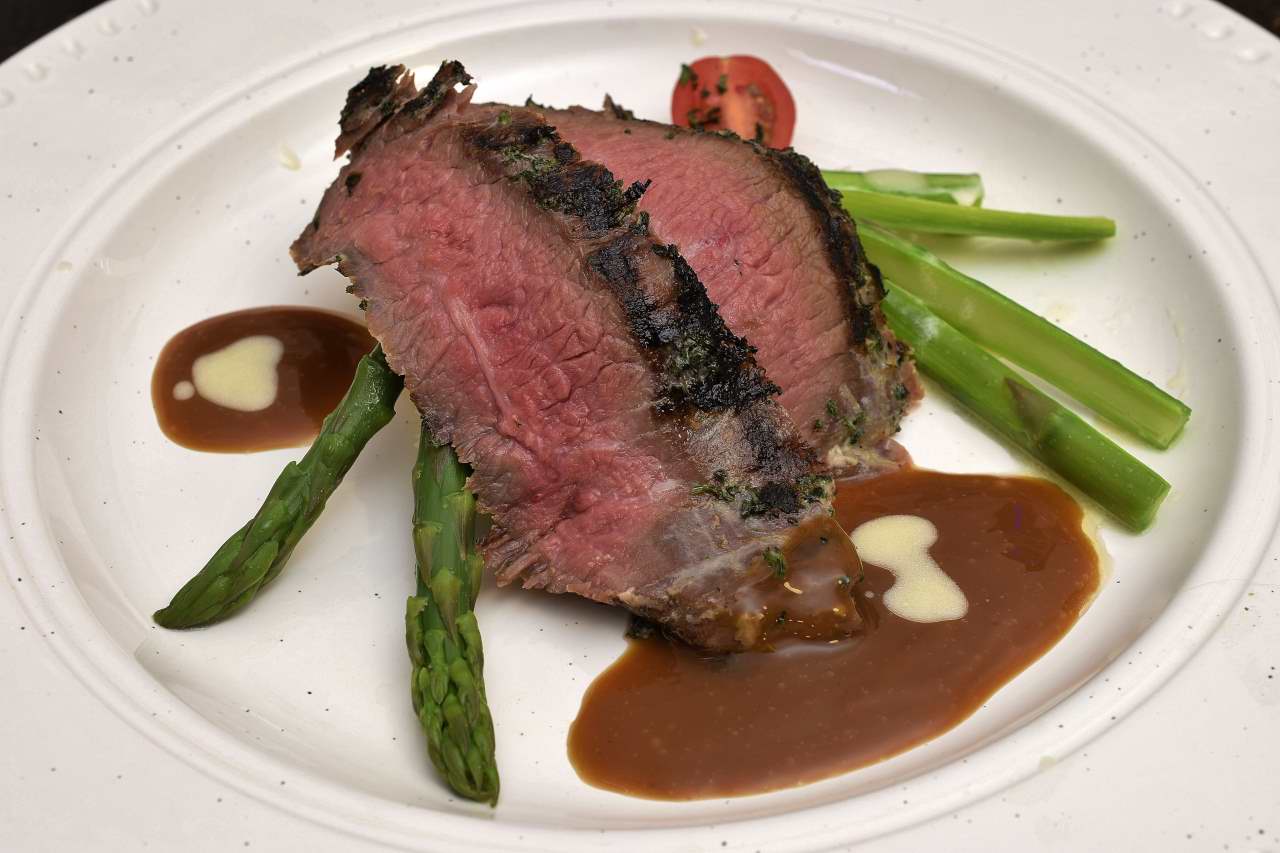 Cut slices on the bias from the flank steak and shingle from right to left. Form two pools of the brown sauce on the plate. I had some butter sauce from the day before, so I reconstituted it and dotted the brown sauce. Put half a tomato on the plate with a tiny pinch of parsley on it. 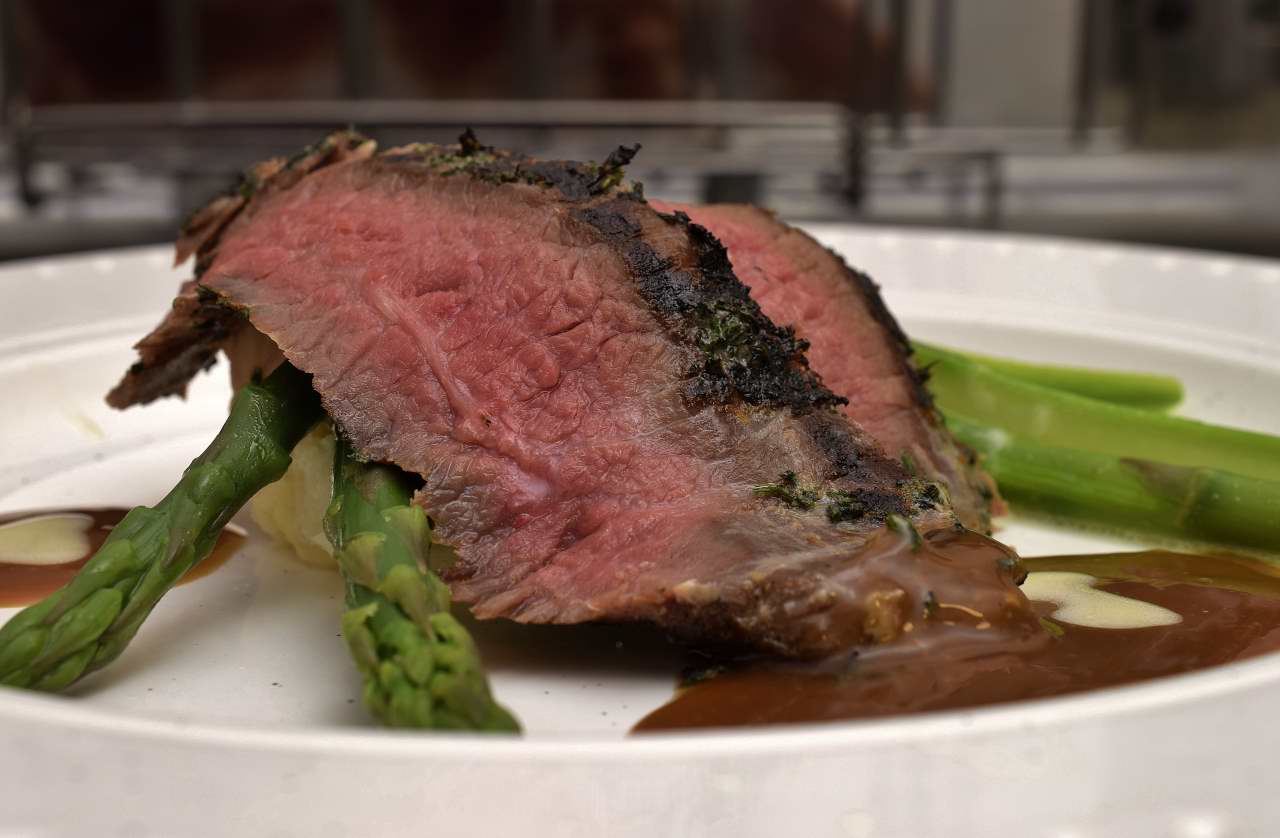 I never once saw this on the menu in London.

My earliest memories of London Broil are inseparably linked to flank steak, and vice versa. Even fifty years ago, people enthusiastically proclaimed flank steak's value--only to promptly emphasize that it required marinating in order to be tender. Where's the value in that?

Back then, flank was more expensive than chuck but less so than top sirloin and all the other premium cuts. We were eager, maybe even desperate to believe that this coarse grained, working muscle could be made tender like a steak. Little did it matter that the scientific evidence assured us that marinades could not tenderize or even penetrate the surface of protein chains.

Sous vide does what marinades cannot.