We know that sous vide can tenderize even the toughest of cuts. We no longer need special equipment just to carve some meat.

Seal the flank steak in heat rated sous vide bags and stage into the tank for
8 hours.

When your timer goes off, reduce the heat in the tank to 125 F/52 C. The steaks can be held at this temperature for up to 8 more hours without any noticeable degradation.

Turn the oven on low heat–anywhere from 170 F/77 C to 225 F/107 C. Stage the plates into the oven so they are hot at service. Every chef knows that this can save a considerable amount of last minute scurrying. It also reduces the dread that accompanies delegating transportation of the food to servers who are more concerned about their hair and Twitter than they are about the prompt delivery of their guests’ meals. If the clients complain that the food is cold, the finger will be pointed at the kitchen–ironically, I have never met a cook yet that knew how to cook food until it was cold.

Sometimes I just can’t help myself

Finish removing the flank steak from the bag and pat dry. Season with kosher salt and pepper on both sides and set aside on a plate or other smooth surface.

Cut the grape tomatoes in half, set aside. Cut the cauliflower florets in half so they have a flat surface. Set aside.

Cut the potato in half, in half again, and in half again. This will give you eight, bite sized pieces that have three flat sides and one rounded side where the peel is. Do not put the potatoes in water. Heat the thick bottomed skillet to 275 F/135 C. Dip a paper towel in oil and rub the bottom of the pan (or spray with Pan Spray/PAM–there is no shame in that).

Stage the potatoes into the pan on at a time like dealing cards or as if you were cheating at dice. Make sure that the flat sides come in contact with the bottom of the pan first. Drizzle with a few drops of oil, sprinkle with salt and pepper and do not move the potatoes for 4 minutes. 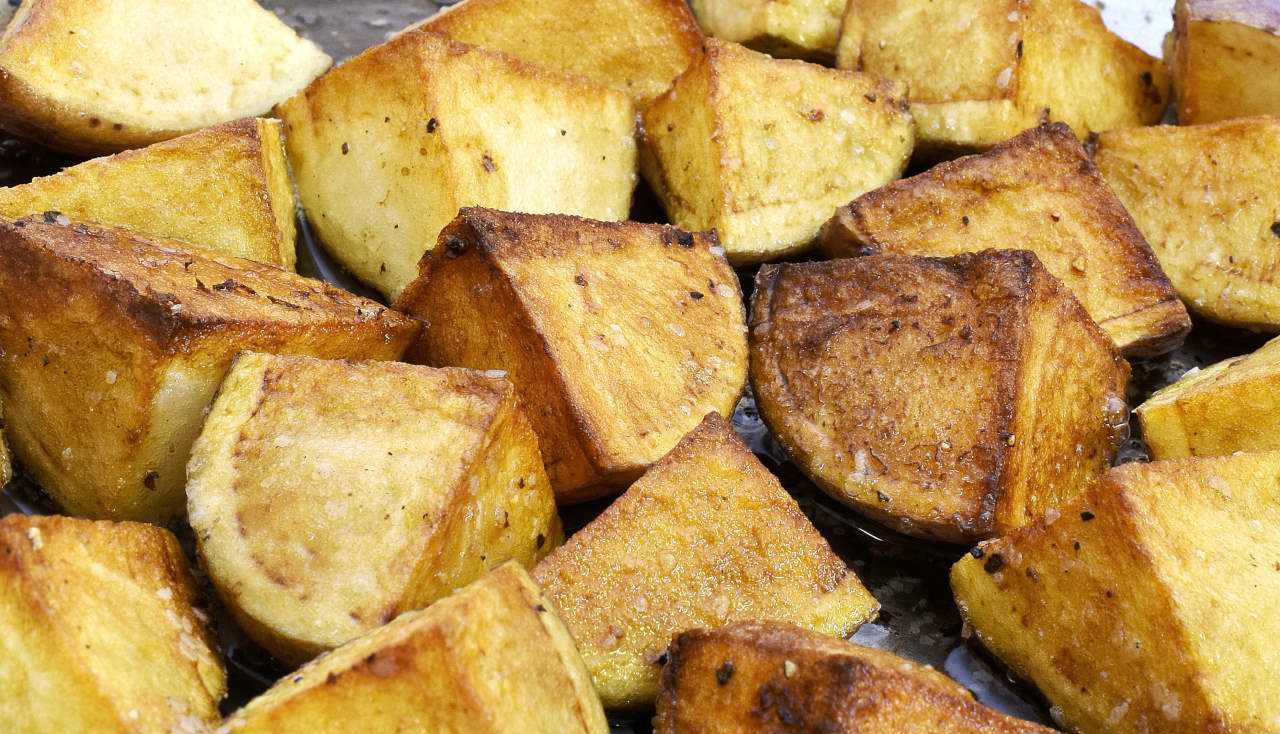 Finally, turn the potatoes on to the red, rounded side. I made several plates, so I did four potatoes. If I can arrange 32 pieces like this, you can certainly do 8. Precision really is more important than passion. Why?

Passion is erratic and unsustainable. Precision becomes a habit. Chefs who let themselves get worked up end up in rehab. Calmly finish browning the rounded side of the potatoes and then remove from the pan to a heat proof bowl or plate. Do not wash the pan.

Add a pat of butter and a pinch of chopped parsley to the potatoes–there is no need to stir–the potatoes will melt the butter. Parsley clings, it doesn’t need much help. Return the same pan to the burner and add a few drops of oil. Treat the cauliflower the same way you cooked the potatoes–four minutes per face, until you get this: 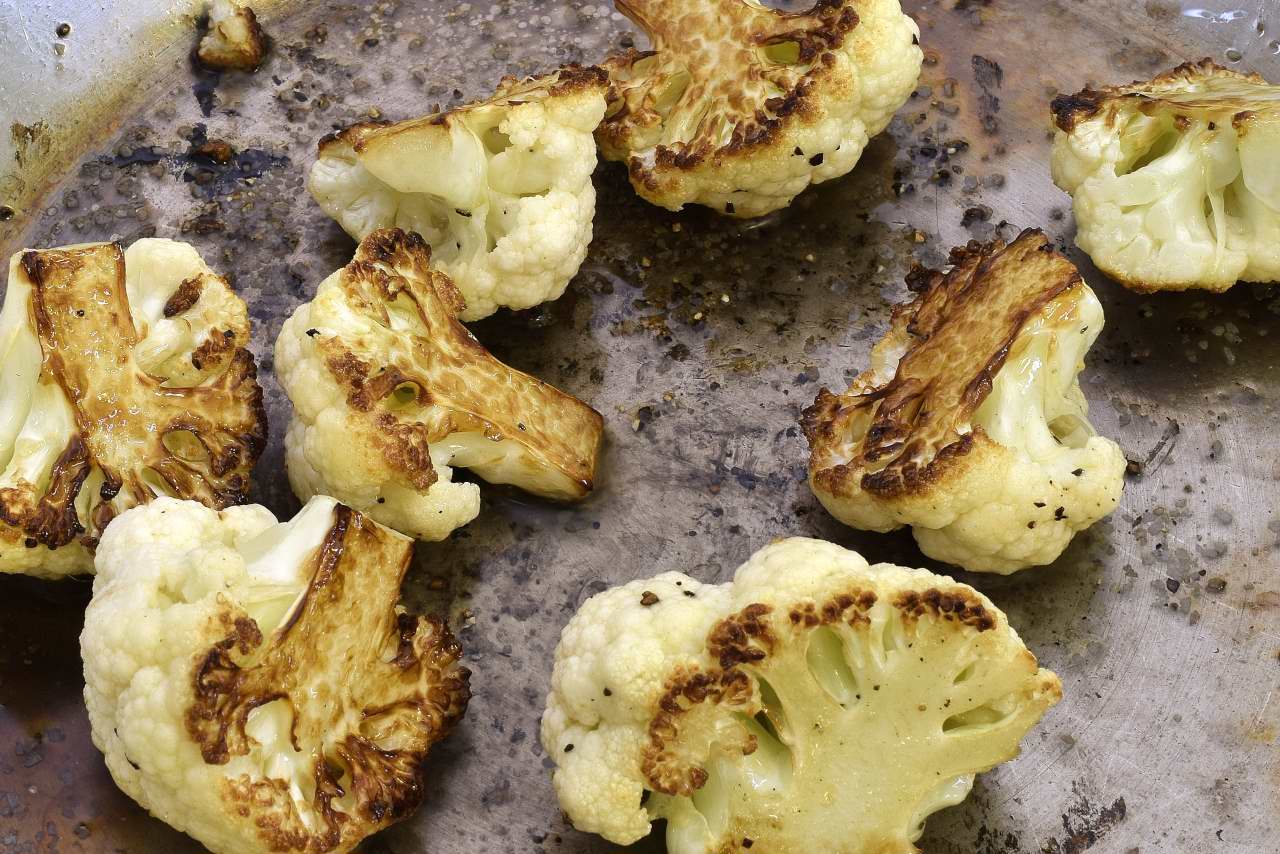 Wipe the pan dry with a clean towel, return to the burner and reheat the surface of the pan to 275 F/135 C. Do not multitask now. Drizzle a few drops of oil in the pan and add the flank steak–you will hear moderate sizzling but it should not smoke. The steak does not have to be especially dark–not everyone is obsessed with caramelization. 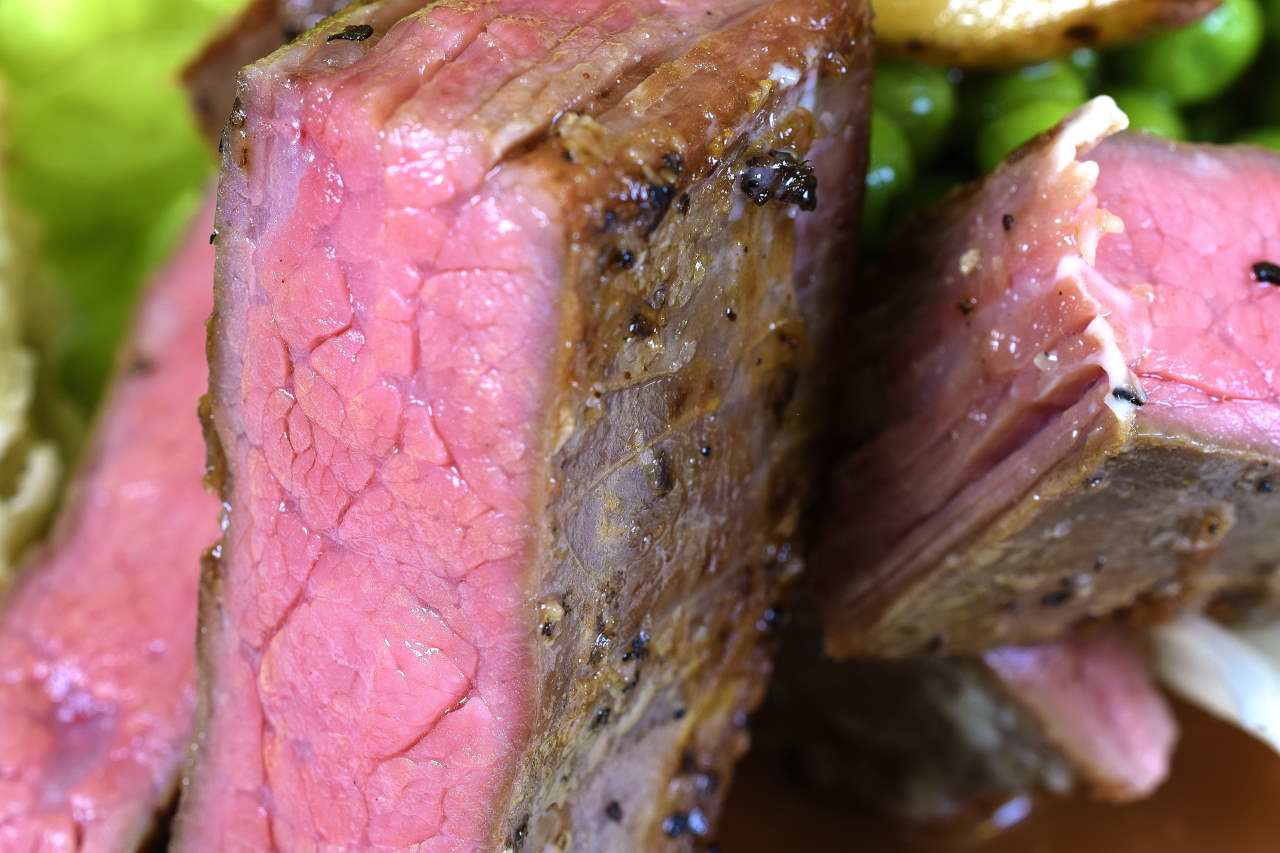 Turn the steak and heat the other surface. Turn off the burner. Set the steak on a small heat proof plate and stage into the oven with the plates and vegetables. Do not wash the pan. Return the pan to the burner and heat to 200 F/94 C.

Add a pat of butter and a scant teaspoon of flour to the pan. Let the flour dissolve into the butter and add the clarified sous jus and the peas. Add a pinch of salt and bring to a simmer. Turn off the burner. Leave the peas in the pan.

Remove the plates from the stove and set on a flat surface. Place a leaf or two of the Butter lettuce in the middle of the plate. Arrange the cauliflower, potatoes and tomatoes on the plate. Cut the flank steak in half, and then cut in half again–enough for two plates. Arrange two pieces of steak on top of the lettuce so you can still see the other components (as shown) 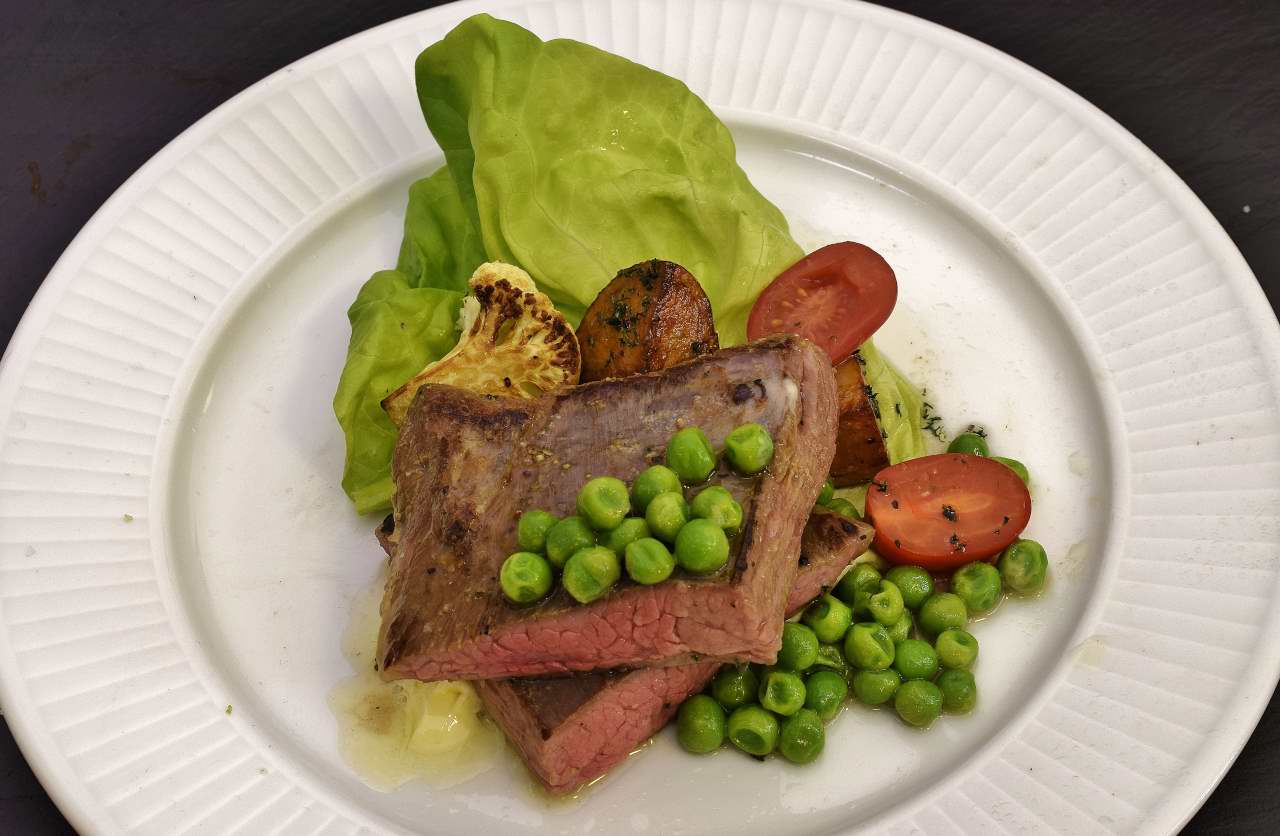 Stack the two pieces of steak at the “6 o’clock” position with the cut sides facing out. Spoon some peas over the steak so that they cascade down onto the plate at the “4 o’clock” position. 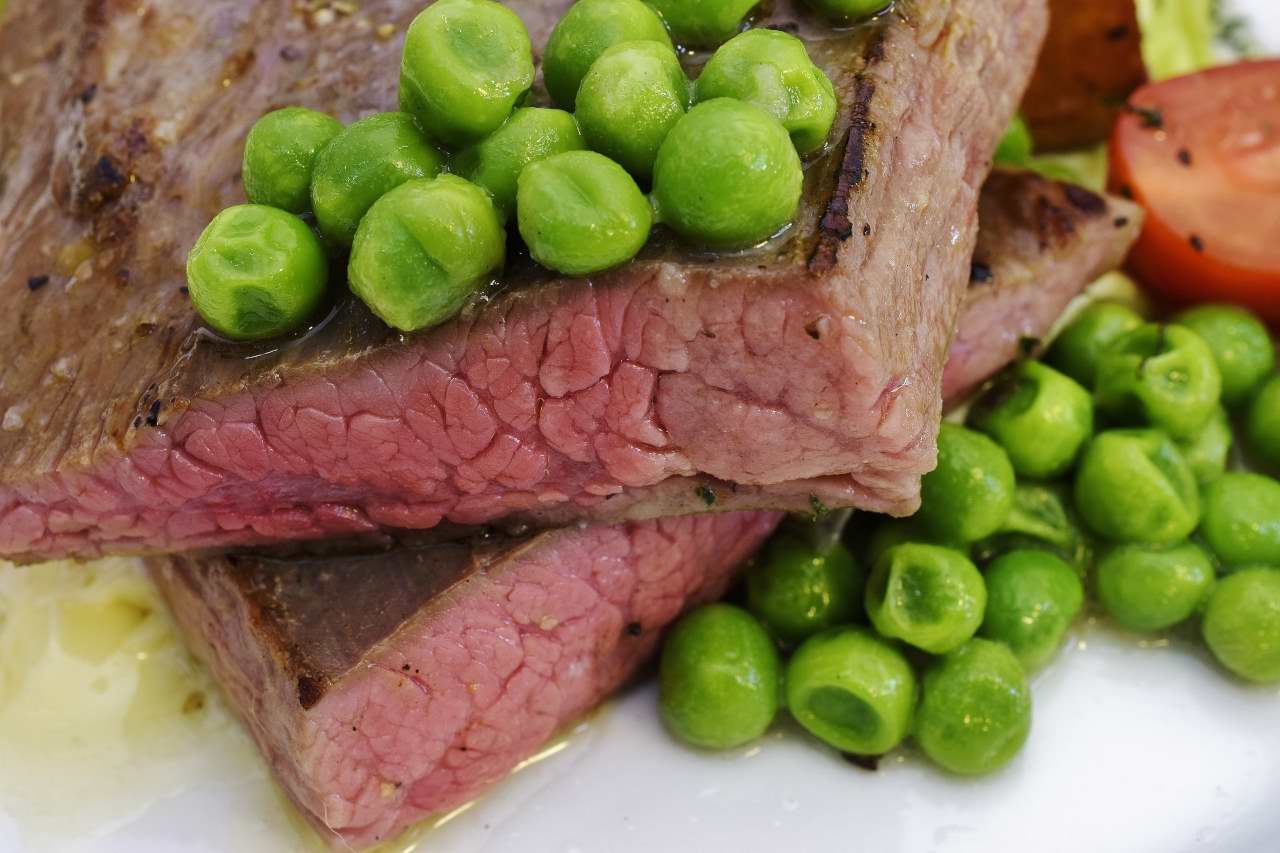 Put a small piece of softened butter on top of the left side of the steak so that it melts down to the plate–you can just see it on the left. Little things. 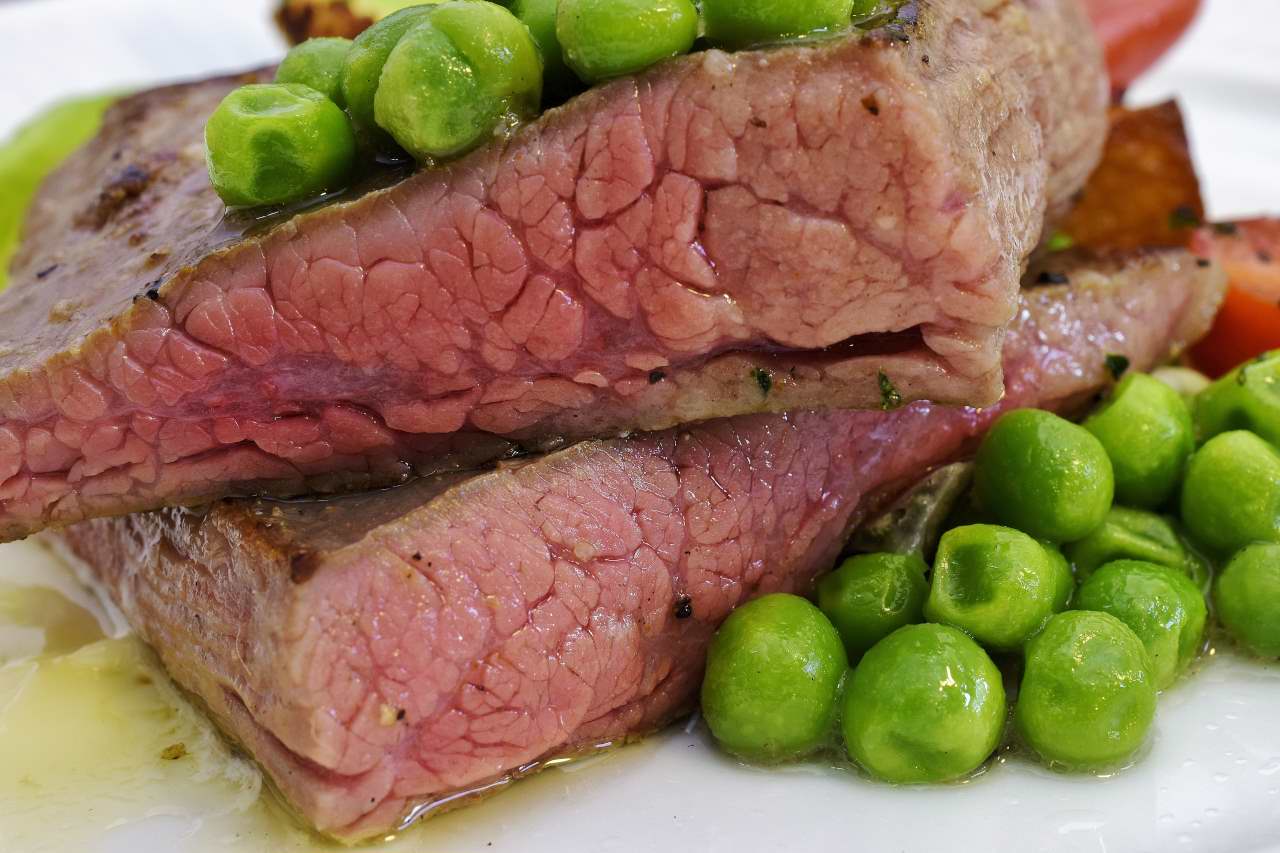 You can see that even though the steak itself is quite thin, the color remains uniform from surface to surface–this is very difficult to achieve without sous vide.

Wait, I’m not done yet

I decided to “throw together” another presentation but I wanted to avoid starting over with new ingredients. So, after searing, I cut this steak into smaller sections for the purpose of making a slightly more shapely presentation. 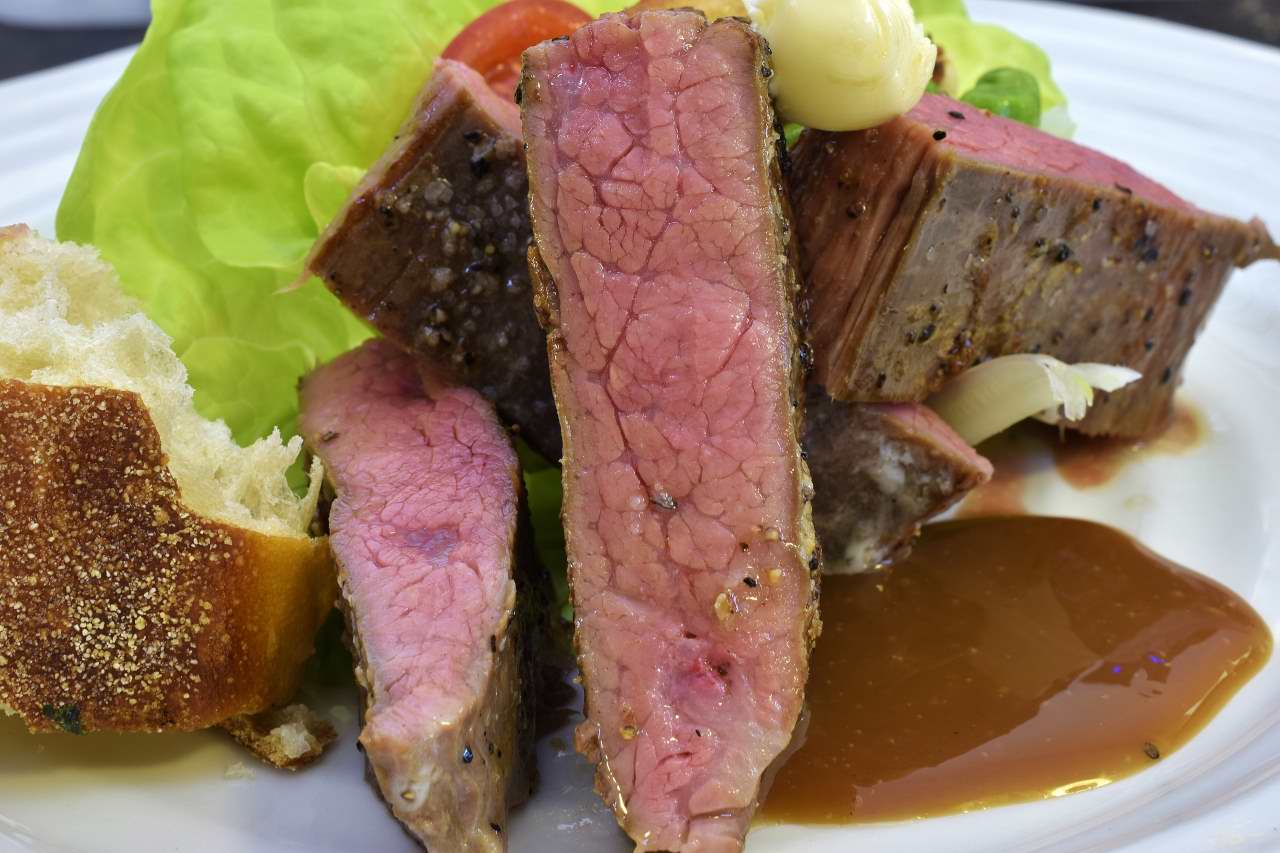 Otherwise very similar. I added a little brown sauce, I am in the habit of keeping it around. A piece of baguette that had been sustaining me while I put the plates together. 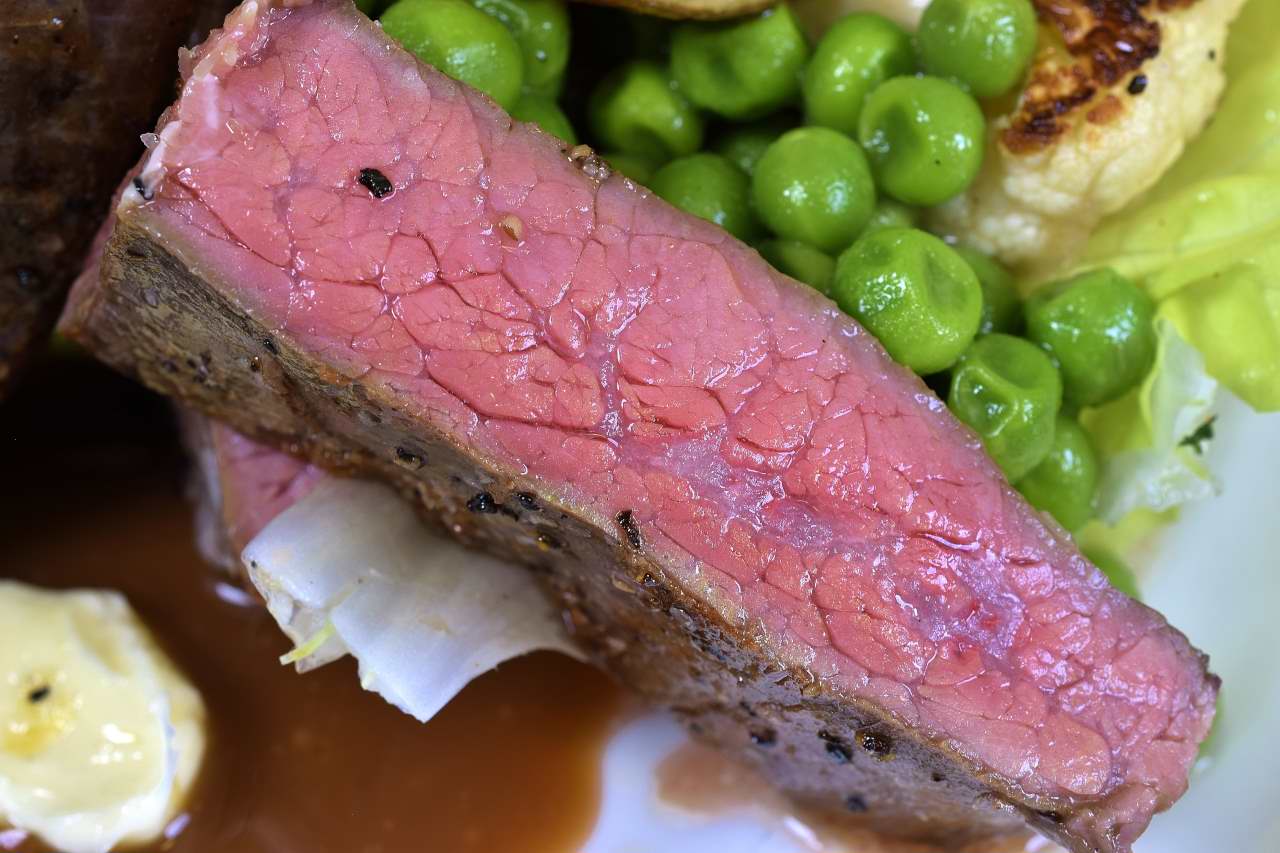 I avoid using that term “yum,” but it does apply sometimes. 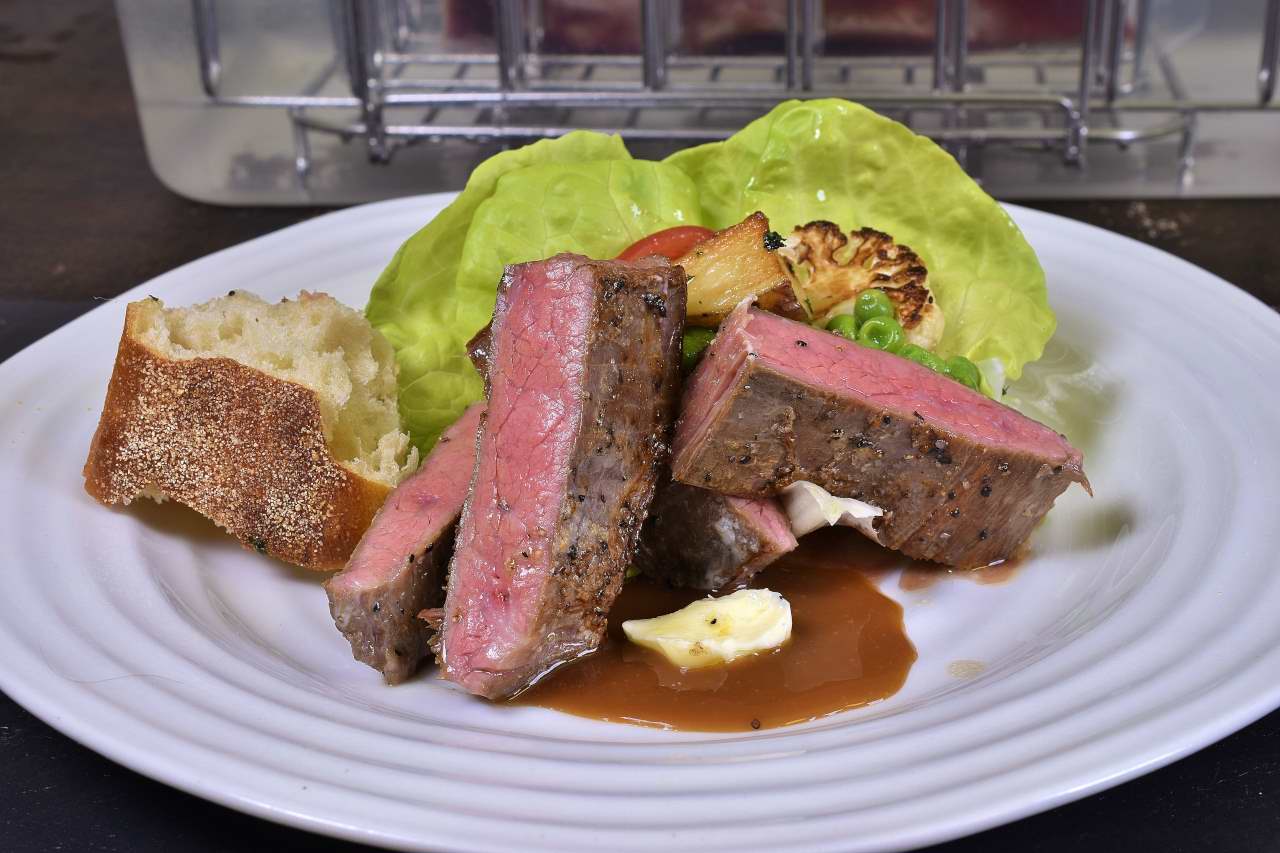 Where does it end?

I still had another piece of flank in the bath, but I had finished all the potatoes, etc. I drained the juices and clarified them. I patted the steak dry, painted with egg white, and sprinkled with a blend of kosher salt, pepper, paprika, oregano, cayenne, and garlic powder. Sort of an entry level black spice. I combined some different colored vinegars. Brace yourself. I deep fried it at 350 F/176 C just long enough to develop a crust. 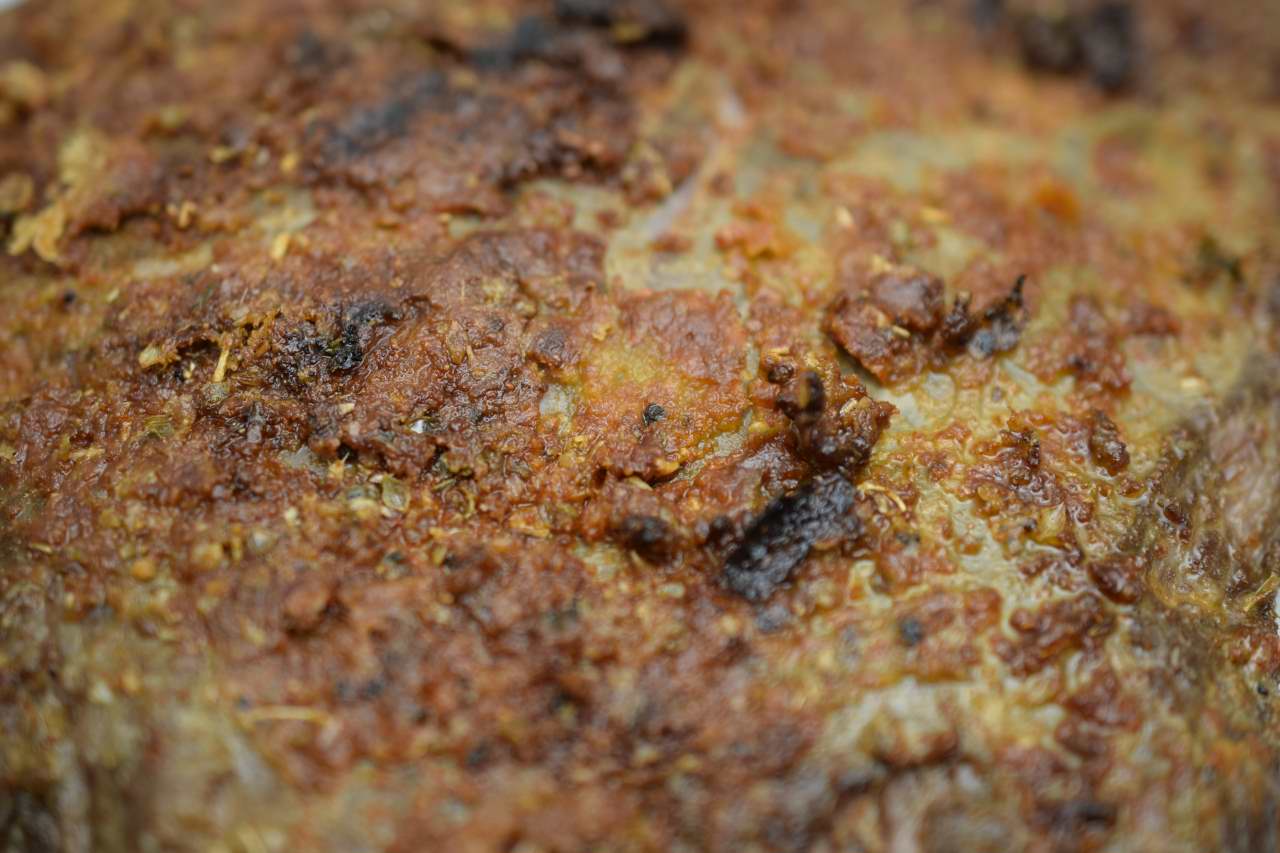 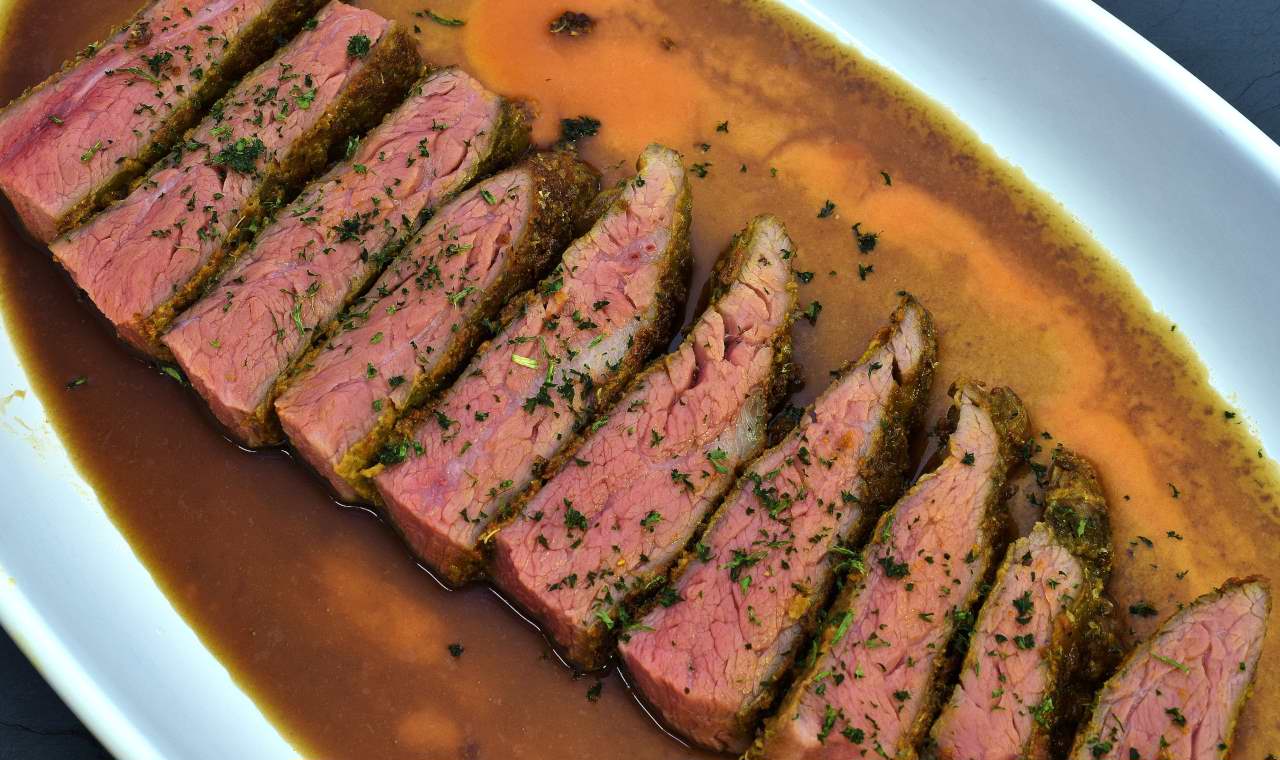 When in doubt–little soldiers, all lined up. Parsley. 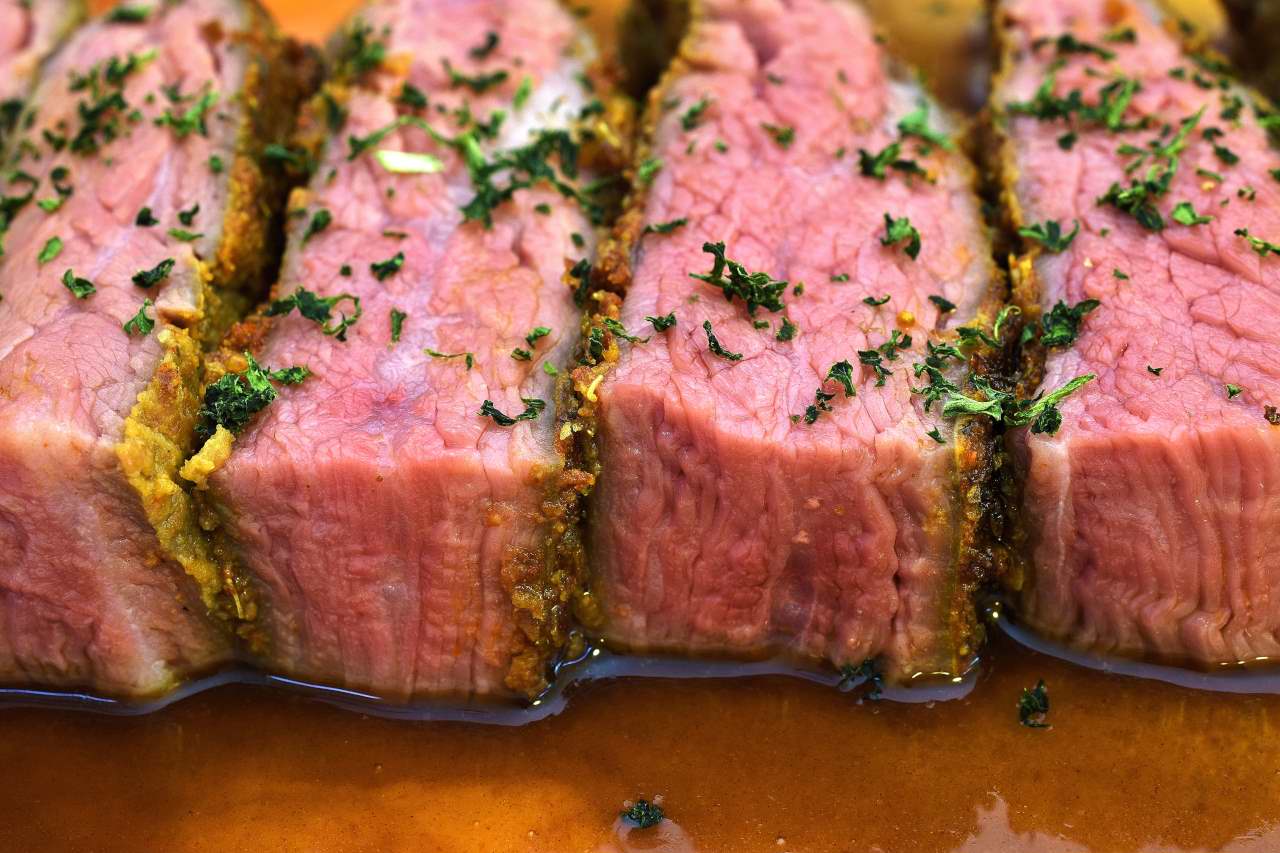 The crust is evident, and the flavor was pronounced. 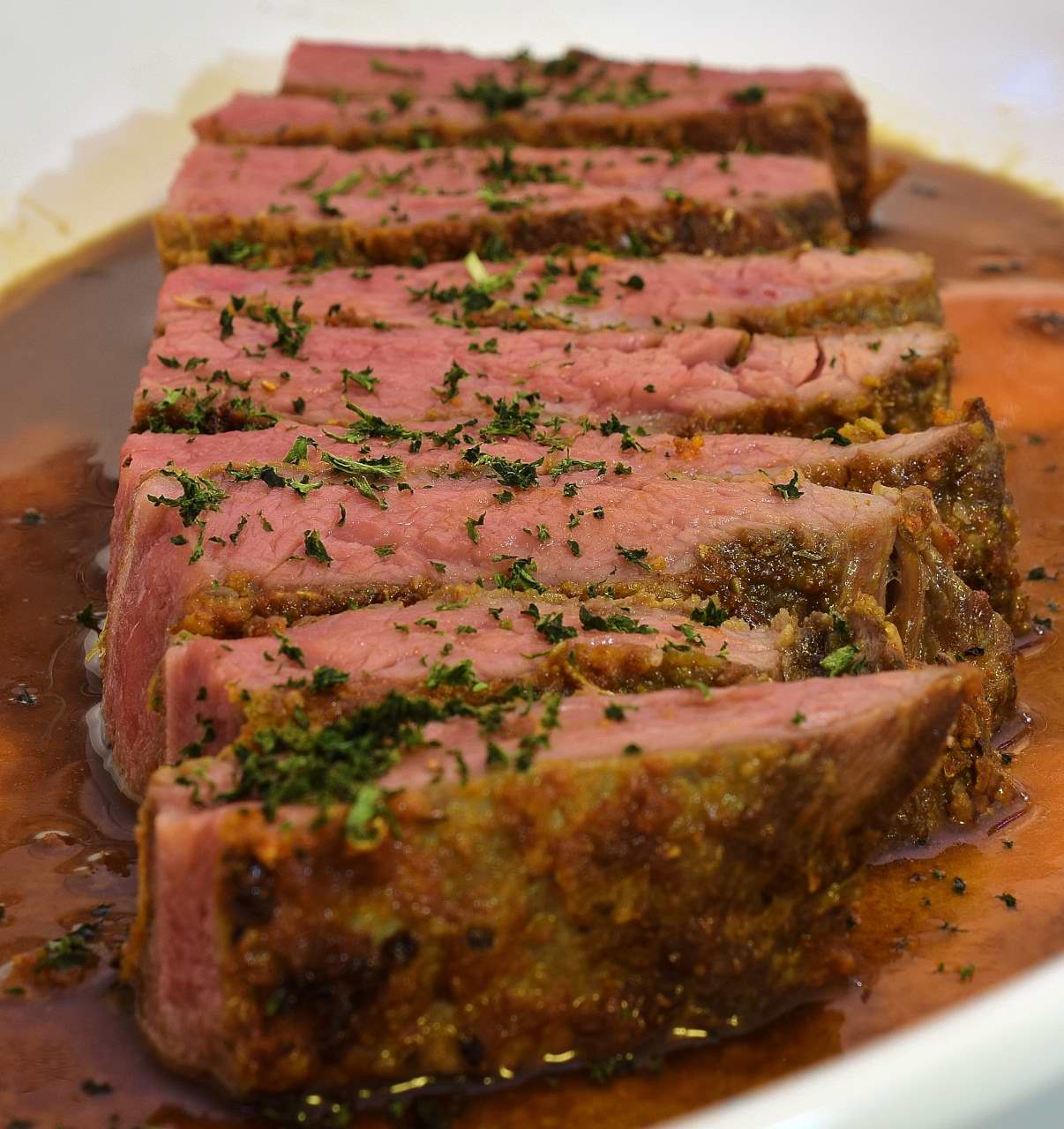 Deep fried, but not the least bit greasy.

We've all seen recipes that instruct us to "slice thin on the bias." Many of us know that this is code for "your jaw muscles are going to be getting a work out soon." There was a time when the price of flank steak justified compromise in tenderness for the sake of thrift. Once marketers convinced us that the fault lay not in the cut itself but in the marinade that we applied too late, the price was gradually eased upward.

I remember thinking of "exciting" table topics to distract guests from noticing that the meat was pretty chewy. The fact was that Norm just couldn't afford sirloin. Sous vide frees us from all of these machinations so that we can now present the steak any way we want.