Sous vide guarantees us a consistent texture suitable for making numerous Tex-Mex dishes with shredded meat--this one especially so.

Corn tortillas, 5 each. If preferred, flour tortillas can also be used. 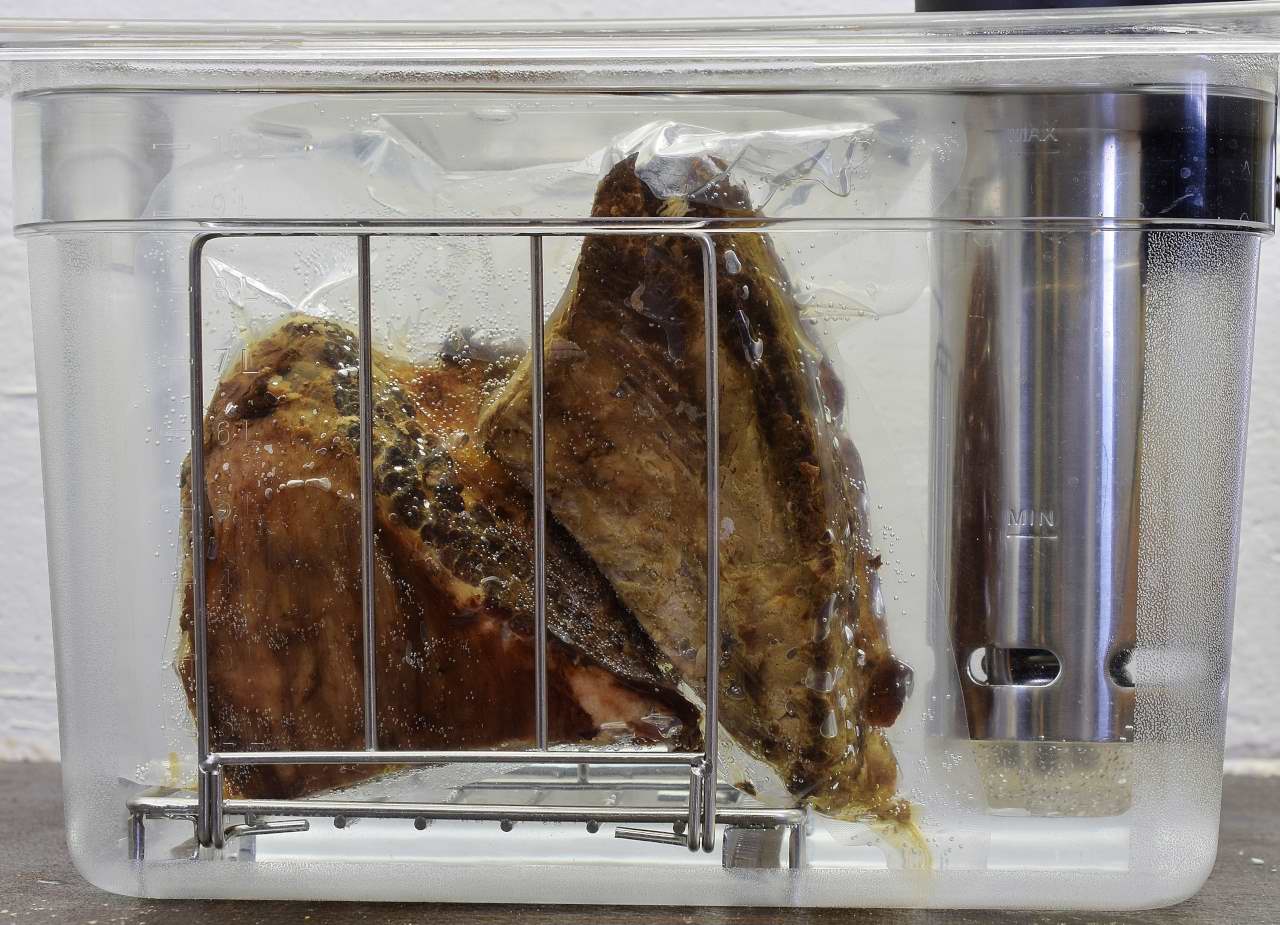 Season the brisket with the kosher salt. Heat the thick bottomed skillet to 250 F/121 C before adding the oil to the pan. This prevents the oil from burning while the pan heats up (see note below). Add the brisket to the pan. Brown well on all sides–if the roast has an “edge” you can stand it up against the side of the pan to achieve uniform color all around. This process should take no more than half an hour. Turn off the burner and let the roast sit in the pan while it cools enough to be easily handled.
Note: Other than for deep frying, oil should never be added to the pan in advance to “heat up.” In small amounts, oil heats almost instantly to the temperature of the surface of the pan.

Seal the brisket in a vacuum bag and process for
24 hours.

After the interval has elapsed, shock the package in iced water until it achieves 70 F/21 C–about 15 minutes. Refrigerate to 40 F/4 C before proceeding.

Toss together the ingredients of the salsa fresca. Set aside. 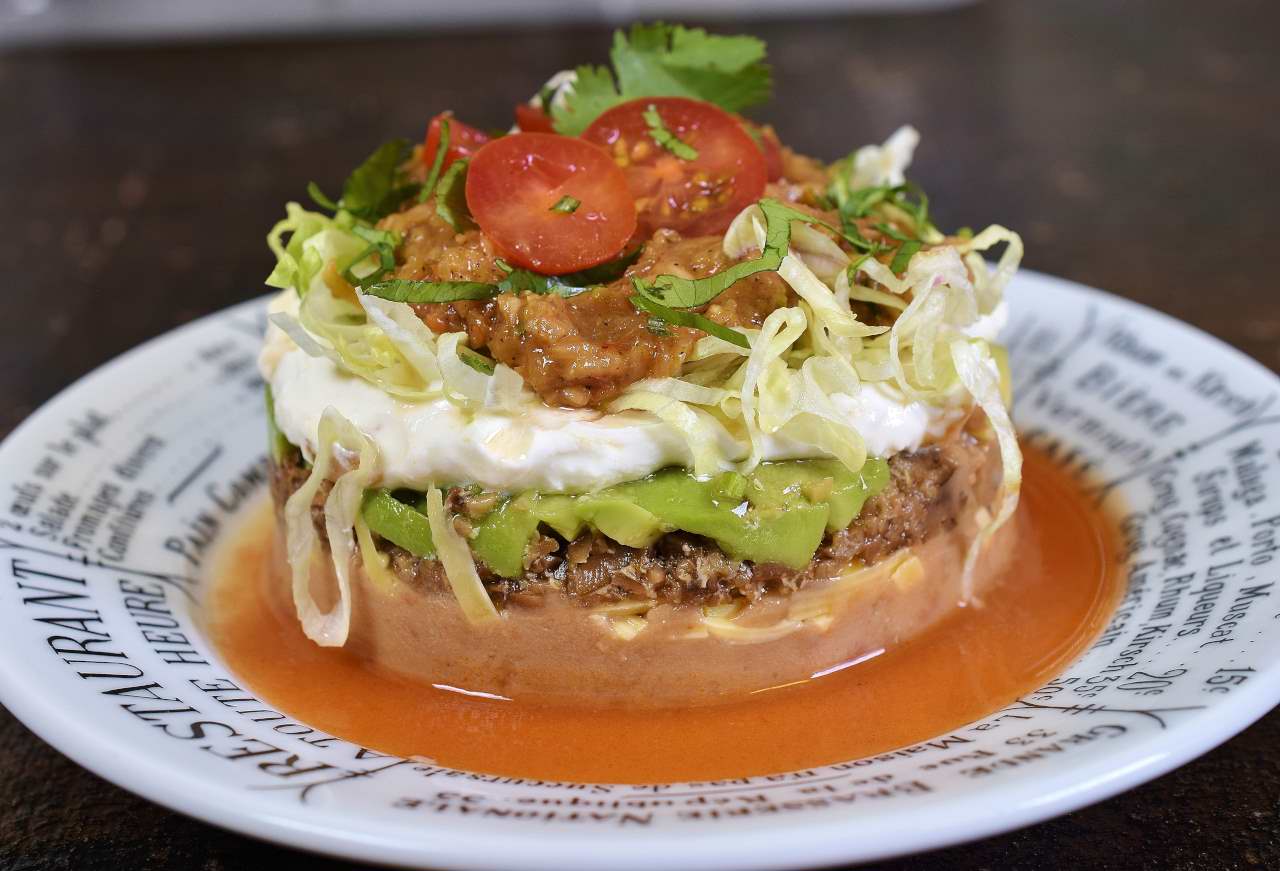 Place the cylindrical mold on a small plate. Use approximately 1.5 oz/50 g of the refried beans to create the bottom level–use a spoon to push the beans down flat. Sprinkle enough grated cheese to create a layer equal to the thickness of the beans, press down with the spoon to level. Chop the olives coarsely and place on top of the cheese–use the spoon to flatten each layer. 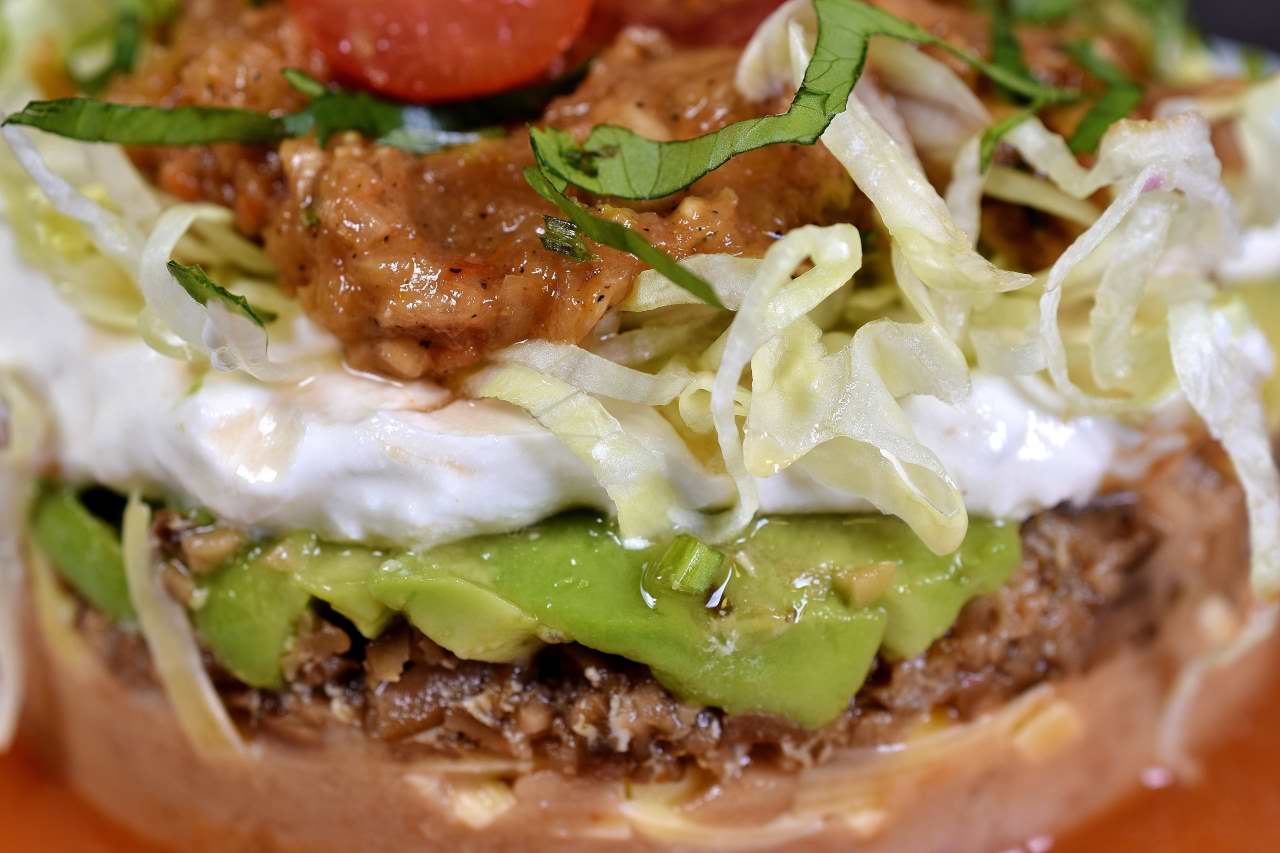 Cut the avocado in half and remove the seed. Do not remove the skin from the avocado. Place the half avocado on the work surface, skin side down. Cut hash marks in the flesh all the way to the skin–this dices the avocado while it is still in the shell. Squeeze the skin over the olives and the diced avocado will fall into the terrine. This avoids the sticky mess that comes from handling the avocados with your fingers. Press down with the spoon.

Add approximately 1 oz/30 g of the sour cream and spread with the spoon to create another layer. Put a pinch of shredded lettuce on top and some salsa fresca on top of that. Garnish with a slice of grape tomato and cilantro. Drizzle the Frank’s red hot sauce around the terrine and refrigerate until service.

Frying gets a bad rap

People blame deep fried food for contributing an excessive amount of oil to our diets. This is inaccurate and unfair to the technique. If the correct temperatures are used, French fries or a deep fried taquito will contain no more oil than the buttered toast that we eat for breakfast.

Deep frying heats food to the boiling point of water–all the way to the center. This is why deep fried foods always seem hotter than foods prepared by other methods. As the food in the fryer approaches the boiling point, the water in the food becomes steam. The steam forces the oil away from the food–this is why the food appears to bubble and boil while it is frying. As long as the food is bubbling, the oil is being repelled.

The faster the interior achieves 212 F/100 C, the less oil will remain. When food in the fryer stops bubbling, you may see it float to the surface of the fryer. Why? The available water in it has been converted to steam, so the food becomes less dense than the oil. At this point, there is no doubt that it is “done.” It may even be done before this happens, depending on the food itself and the application. The very crispest French fries are no longer boiling when they are removed from the hot oil.

Most people neglect to monitor the temperature of the oil. When the oil is not hot enough, it will soak into the food before enough steam is created to force it out. Even if your oil eventually achieves the correct temperature, it is already too late. No matter how long you leave the food in the now heated oil, it will still taste “greasy.”

In the other extreme, overheating oil damages its chemical structure. This creates rancidity and an unpleasant flavor almost instantly. Overheating changes the characteristics of the oil enough to no longer be effective in heating the food properly. The food burns on the outside before the inside can create enough steam to repel the oil. Most people have experienced this, but never really think about it and blame the process.

Always use a thermometer to monitor the temperature of your oil, even if you are using a deep fryer with a temperature display. It is normal for the oil to go down to as low as 250 F/121 C while it catches up to the effect of adding the cold food–then it comes back up. It should not be allowed to go below 250 F/121 C while frying.

Shredding is not only for guitarists

Dip the sealed pouch into hot tap water for a minute or two. This will melt the gel in the pouch. Open the bag and save the sous jus for another application. Pat the meat dry and shred by repeatedly pulling off long strips with the grain. This makes the meat easier to wrap in the tortillas. Set aside.

Place a paper towel on a medium sized plate and set next to the stove. Heat the oil in the skillet to 300 F/150 C. Stage a tortilla into the hot oil for approximately five seconds to soften it–the tortilla will wilt and start forming large bubbles. Carefully remove from the oil and place on top of the paper towel. It will be “oily” at this point–this will be corrected by hot oil later. Repeat the process until all the tortillas are stacked up. Turn off the burner.

Lift the stack of softened tortillas off of the plate and stage onto the work surface. Save the plate; you are going to use it again in a minute. 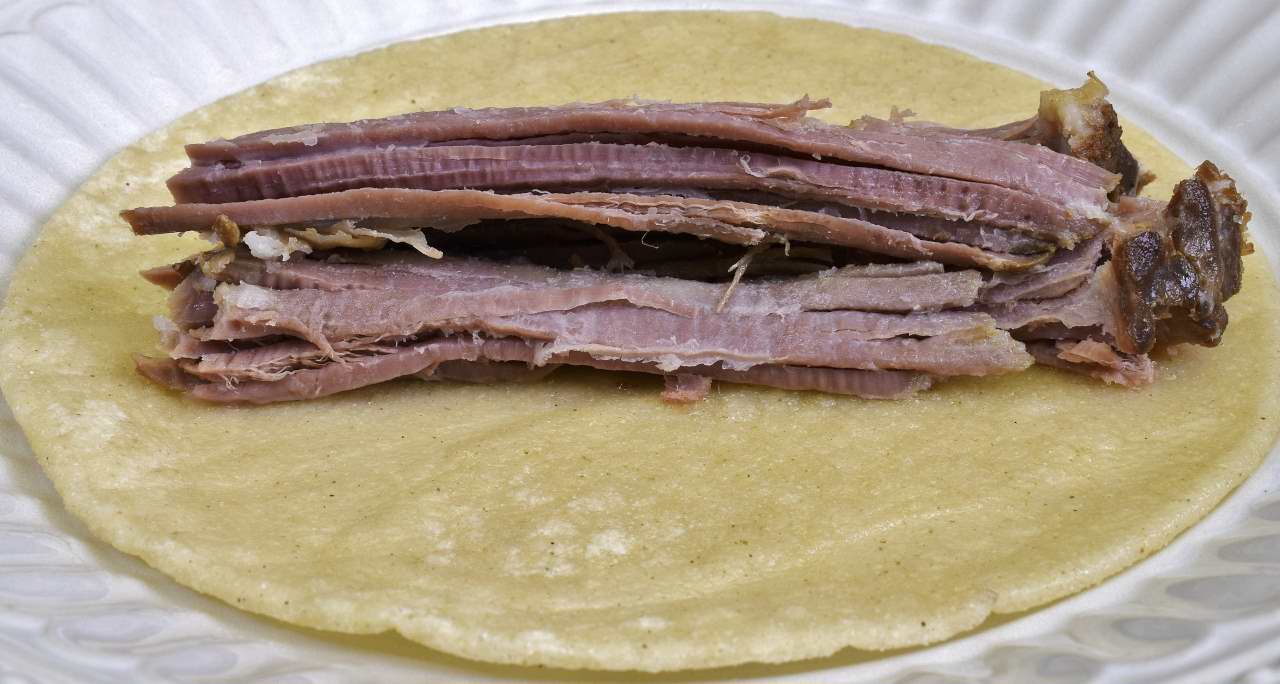 Lay a softened tortilla on a work surface and lay strips of meat in the center–about 1.5 oz/45 g–if the flauta is too full it will tend to unroll. 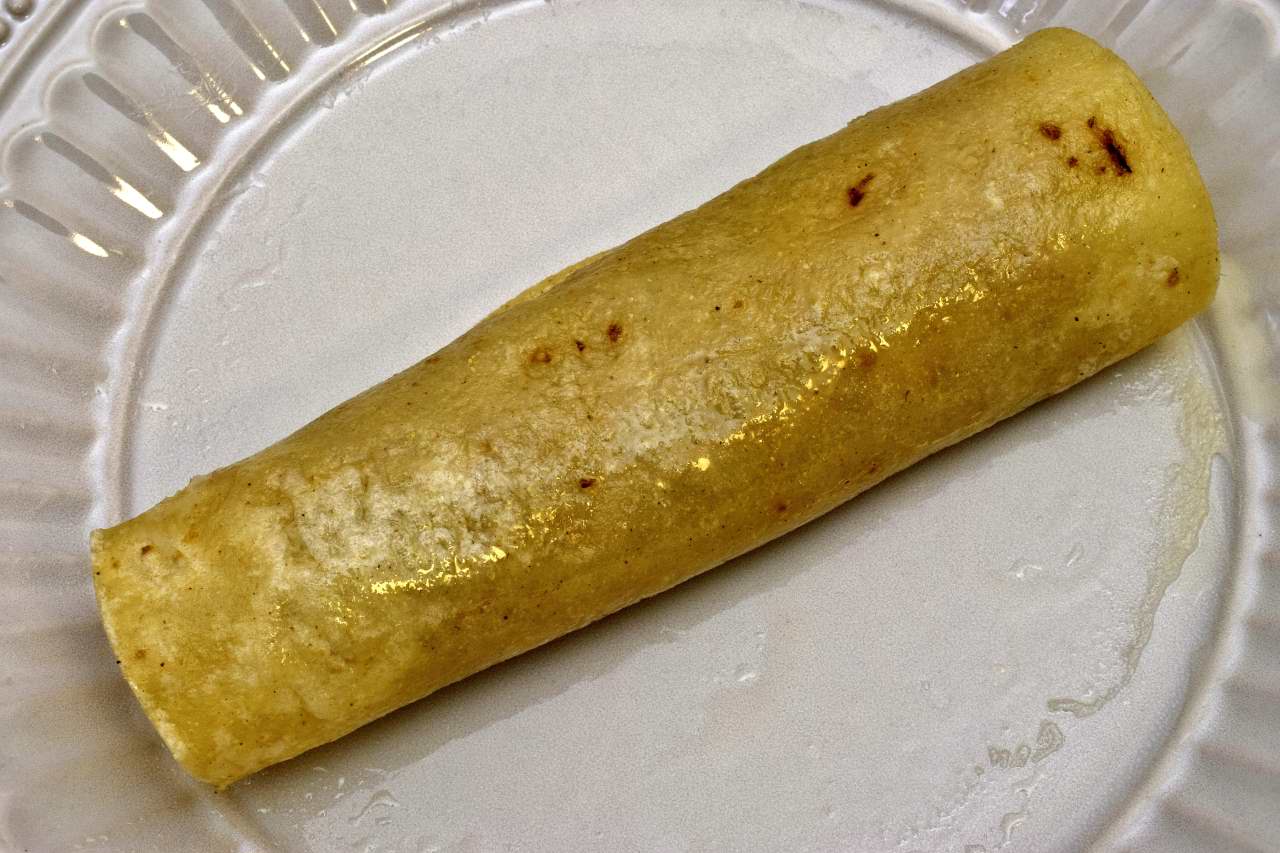 Roll the tortilla around the meat just as if you were rolling a big fat cigar or whatever.

Place the flauta on the plate and repeat until you have five flautas next to each other. Put the plate of flautas in a sous vide bag and vacuum (optional). This removes all the air inside the tortilla and prevents the flauta from unrolling. You can also freeze the freshly rolled flautas on the plate to prevent the unrolling effect.

We who are about to fry…

Line the colander with paper towels and set the colander on top of the sauce pan. This is to strain the oil when you are done frying. Very important. Set aside. Fill the skillet with oil no more than half way up the sides. This allows for the volume of the flautas and the inevitable foaming of the oil. Heat the oil in the skillet to 300 F/150 C. Carefully remove a flauta from the plate and stage into the oil with the seam side down. It will begin to bubble immediately. Add flautas one at a time.

If the skillet is 12″/325 mm or larger, it should hold five flautas easily. If you use a smaller pan, be careful not to crowd the flautas or they will stick together and not brown evenly. Better to do two batches. When you remove the last flauta, put a fresh paper towel on the plate and keep nearby.

The tortillas will brown on the bottom very quickly–do not multi task at this point. If the phone rings, ignore it. Barricade the entrance to the kitchen if necessary. When the flautas are brown on the bottom, gently and slowly turn them over with tongs or a fork. Brown the other side. Turn off the burner. Remove the flautas one by one, and stage back on to the plate with the paper towel. Think of all the dishes that we just avoided washing! Strain the oil through the paper towel now so you don’t have to do it later. 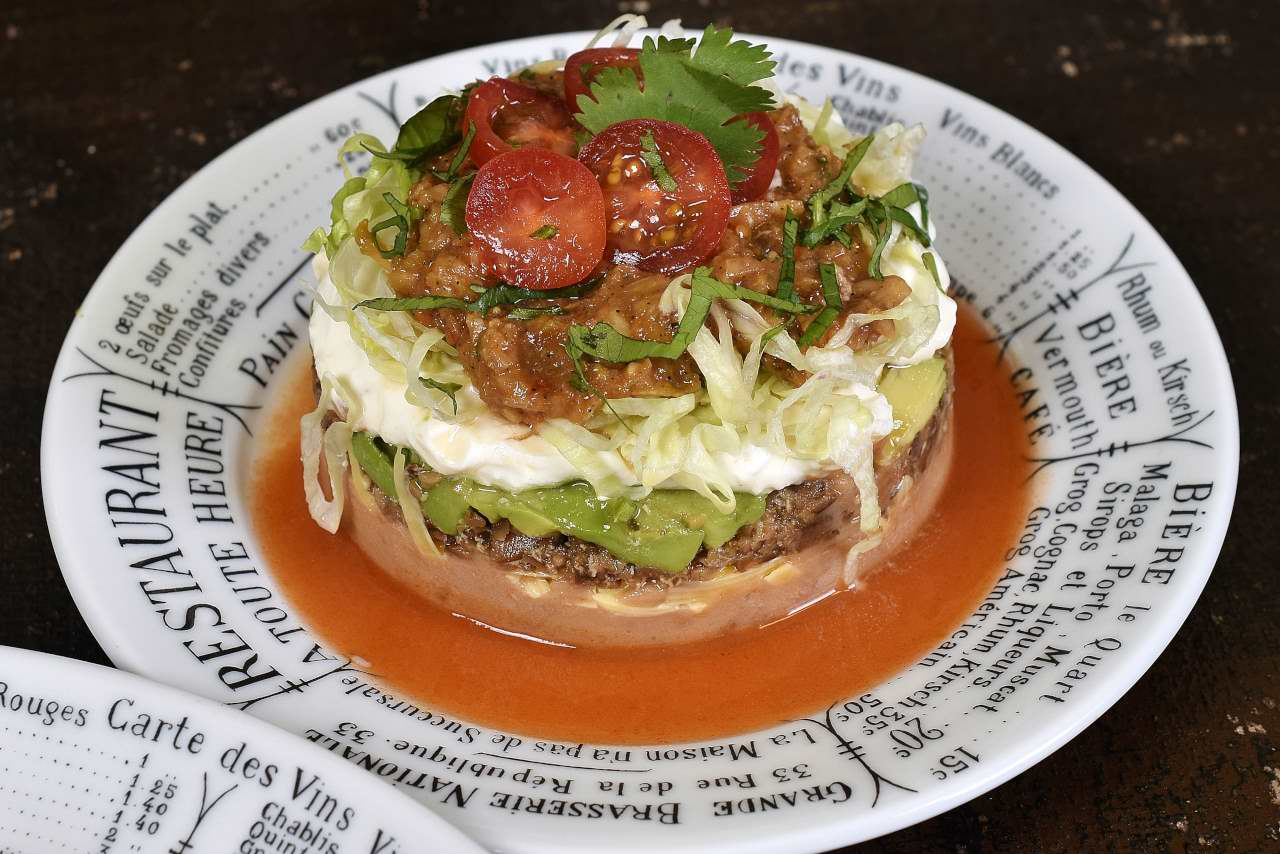 Remove the 7 layer terrine from the refrigerator. Run a knife around the edge inside just to be sure and remove the ring.

Arrange the flautas on the plate as shown, or just line them up like little soldiers. Usually, flautas are topped with the shredded lettuce, avocado, salsa, etc. 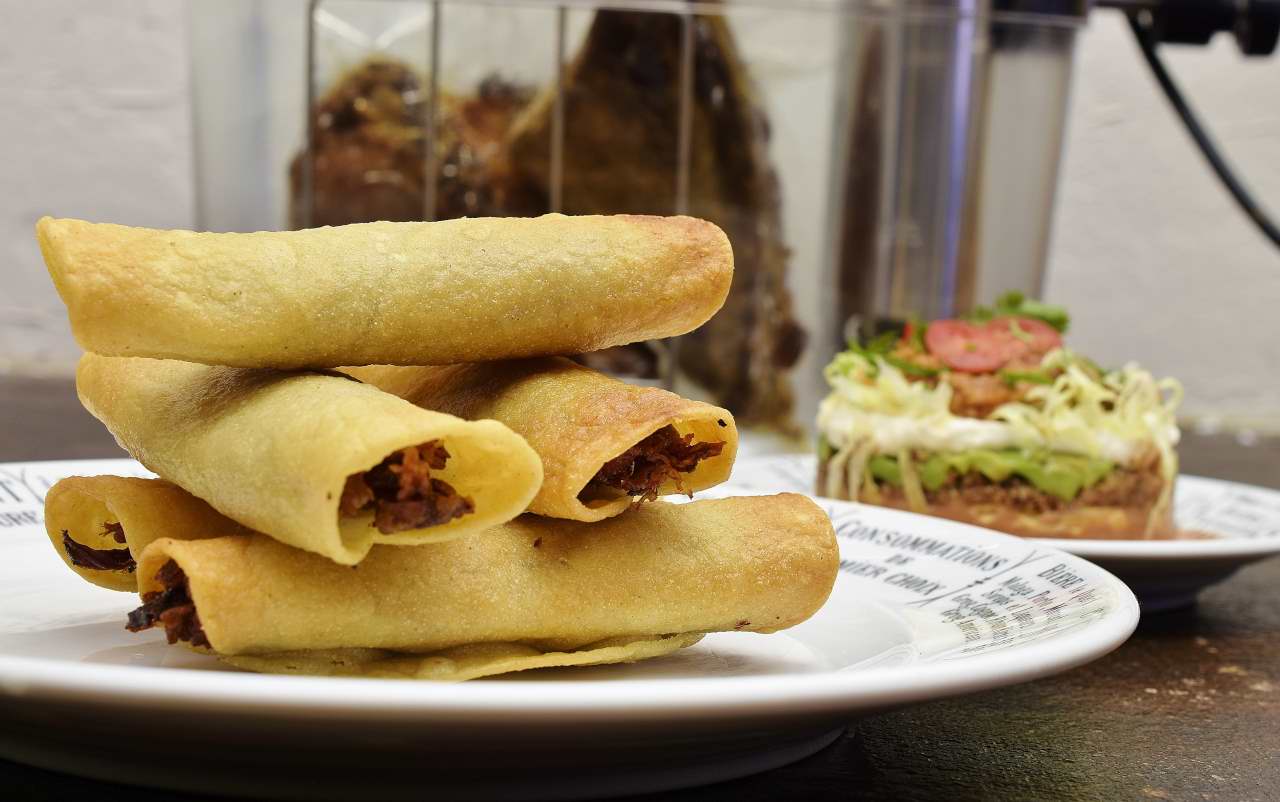 This makes for an attractive presentation, but one that is somewhat awkward to eat without making a mess in your lap. The fact that the flautas tend to shatter when you bite into them exacerbates this phenomenon. That is why I gave this dish the “Gringo” treatment. 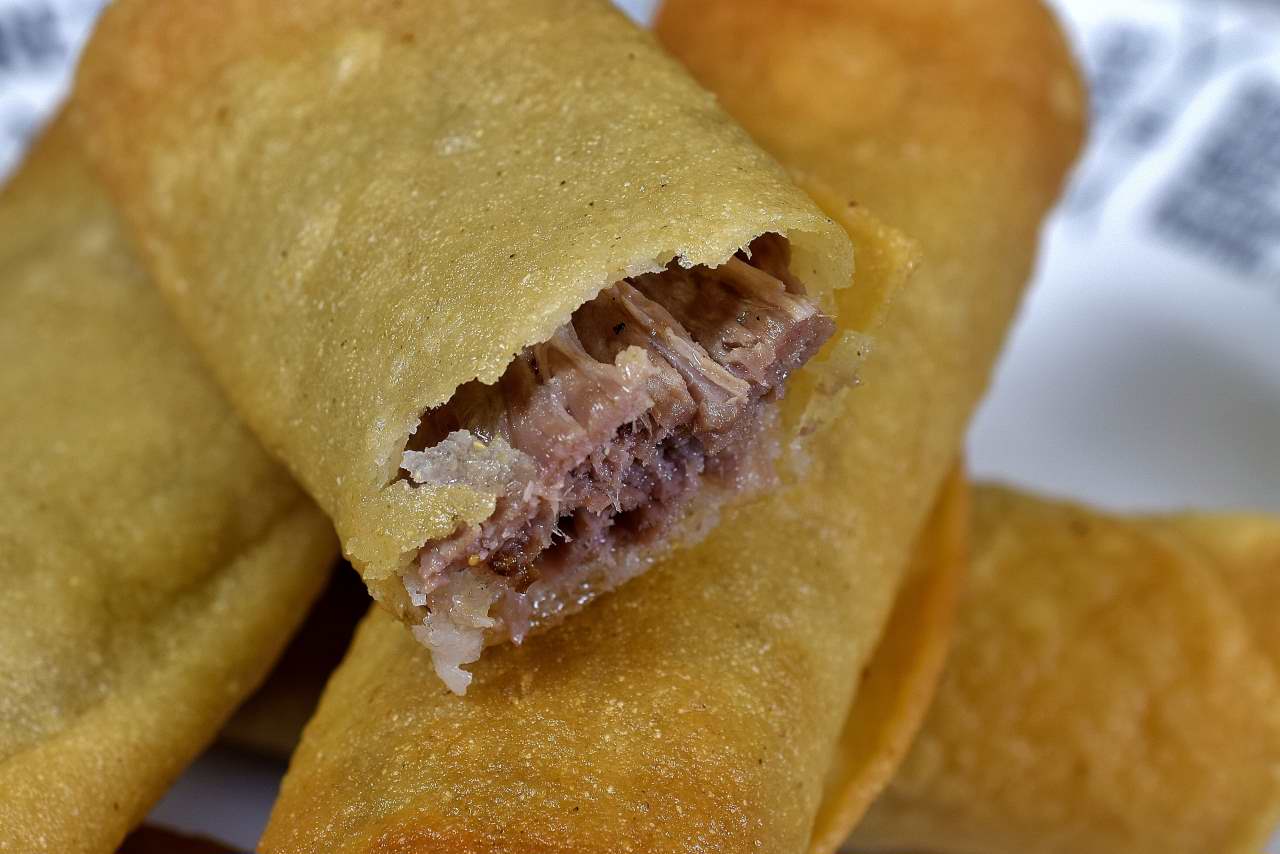 Do not attempt to break the flautas in half. The long strings of meat that we used may pull out. Bite into them or cut them with a sharp knife. We all know this is finger food, right? 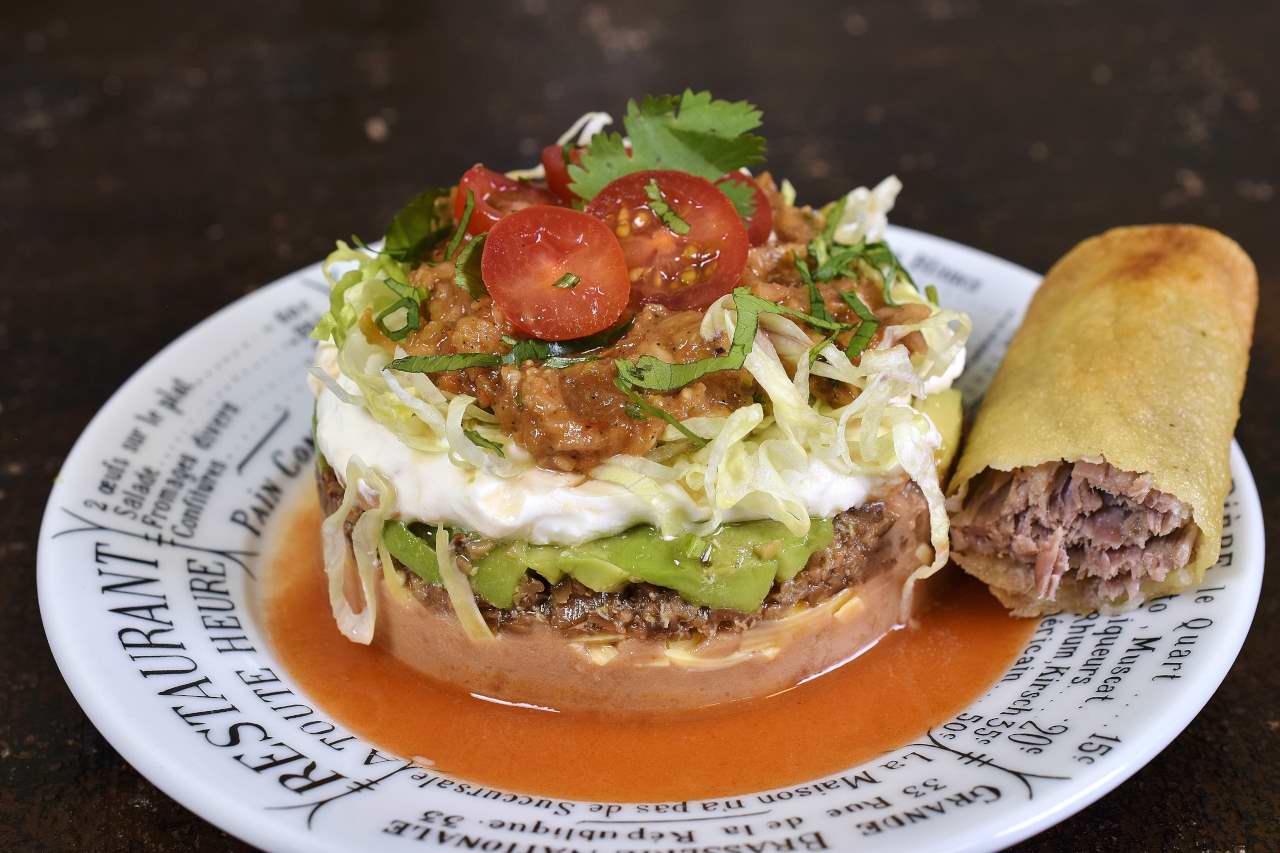 Lots of different shapes! Use a fork or spoon to dig into the tower and balance it on the end of the flauta… 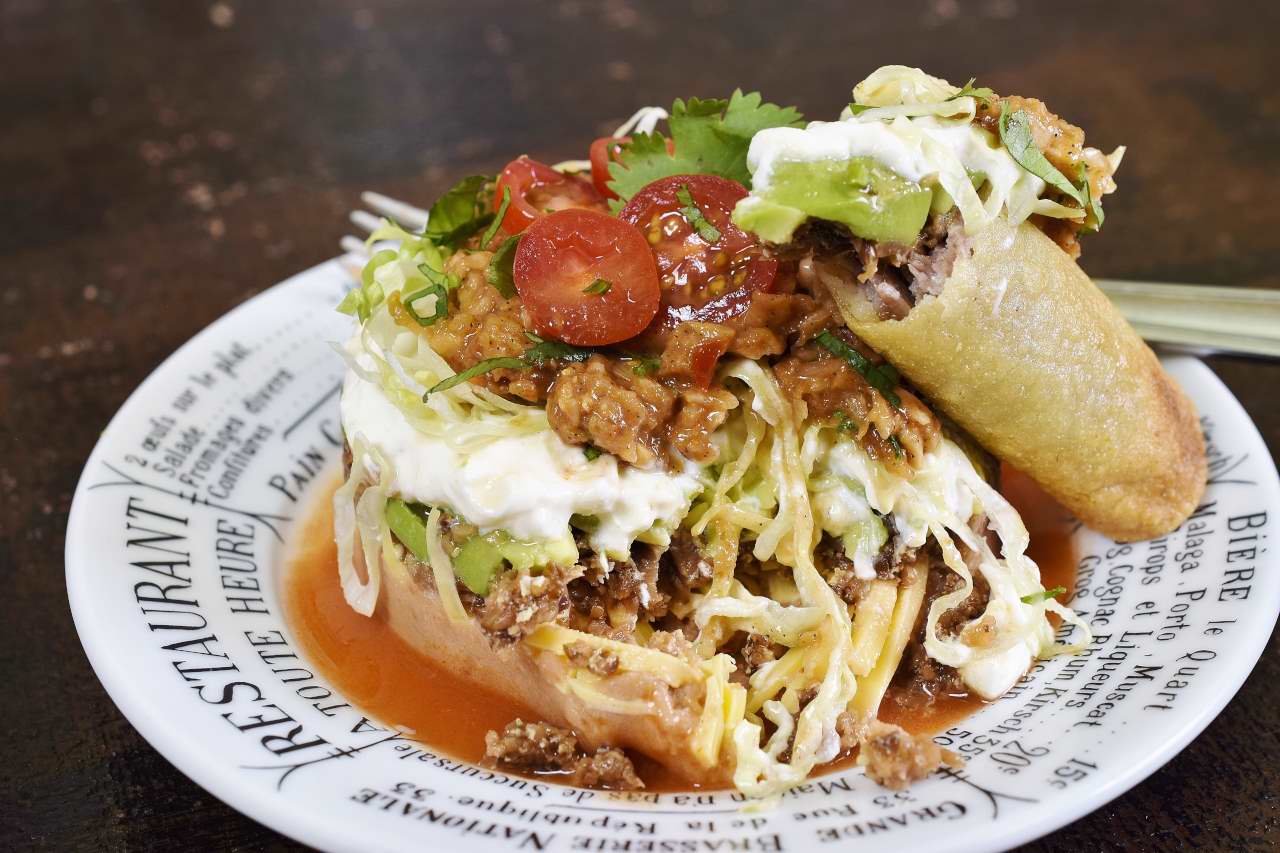 Flautas, taquitos, tacos dorados: call them what you will. These crispy fried "flutes" are a classic expression of flavors and textures typical of American Southwestern cuisine and points south. This version offers us an opportunity to create a presentation that is atypical in its sculpture-like appearance and altitude.

Sous vide facilitates the creation and preservation of the "machaca" style shredded meat without the need to constantly monitor progress over a hot stove. Vacuuming the stuffed tortillas helps prevent the "unrolling" effect that plagues novices and experts alike.