This recipe has a cross-regional feel--thyme, rosemary and sage identify with a multitude of cultures but co-exist peacefully.

For the vegetables, we used:
Carrots in 3 assorted colors, 1 each.
Beets, 1 each.
Red potatoes, quartered, 1 each.
Celery heart, 1 each. 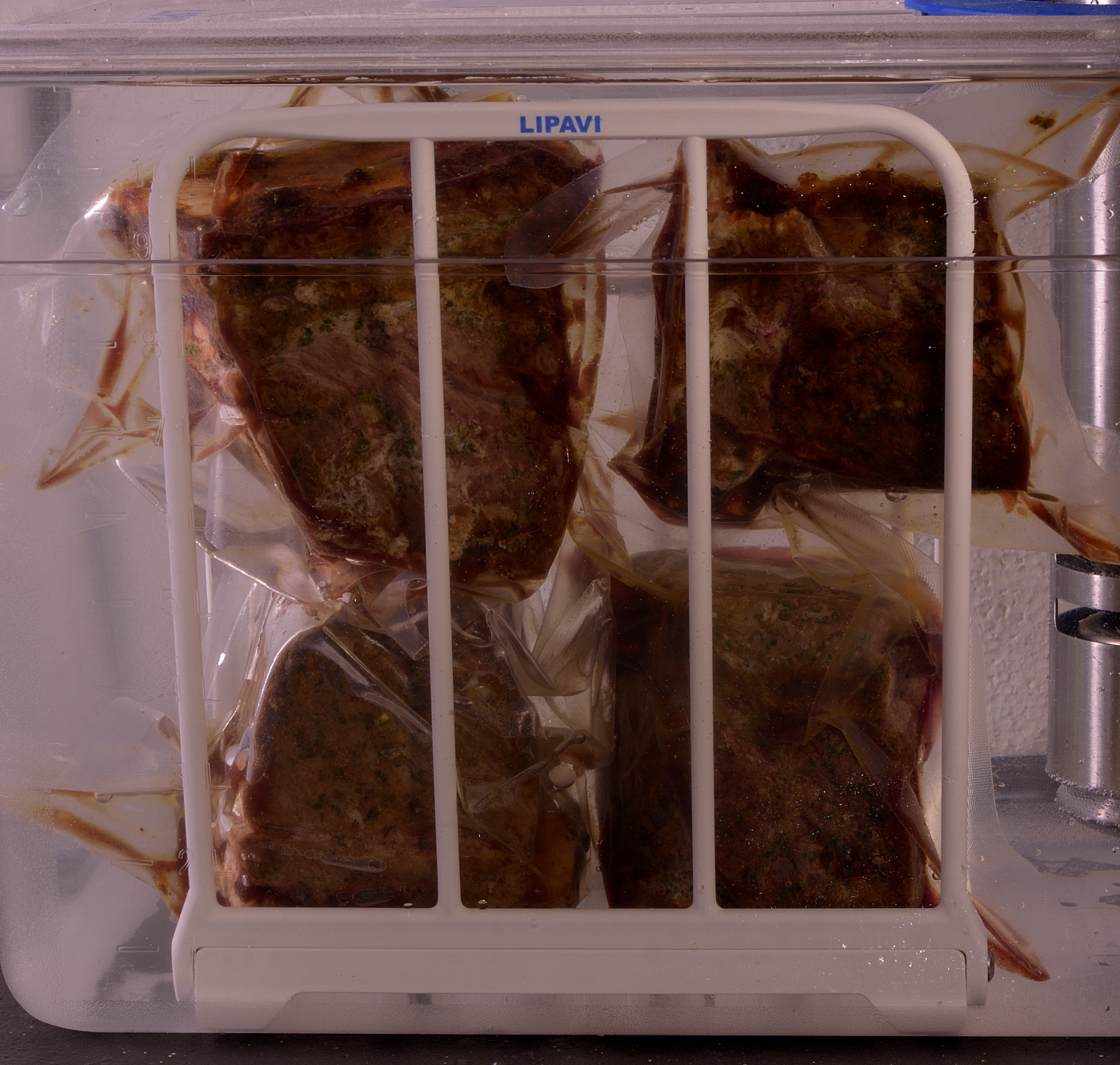 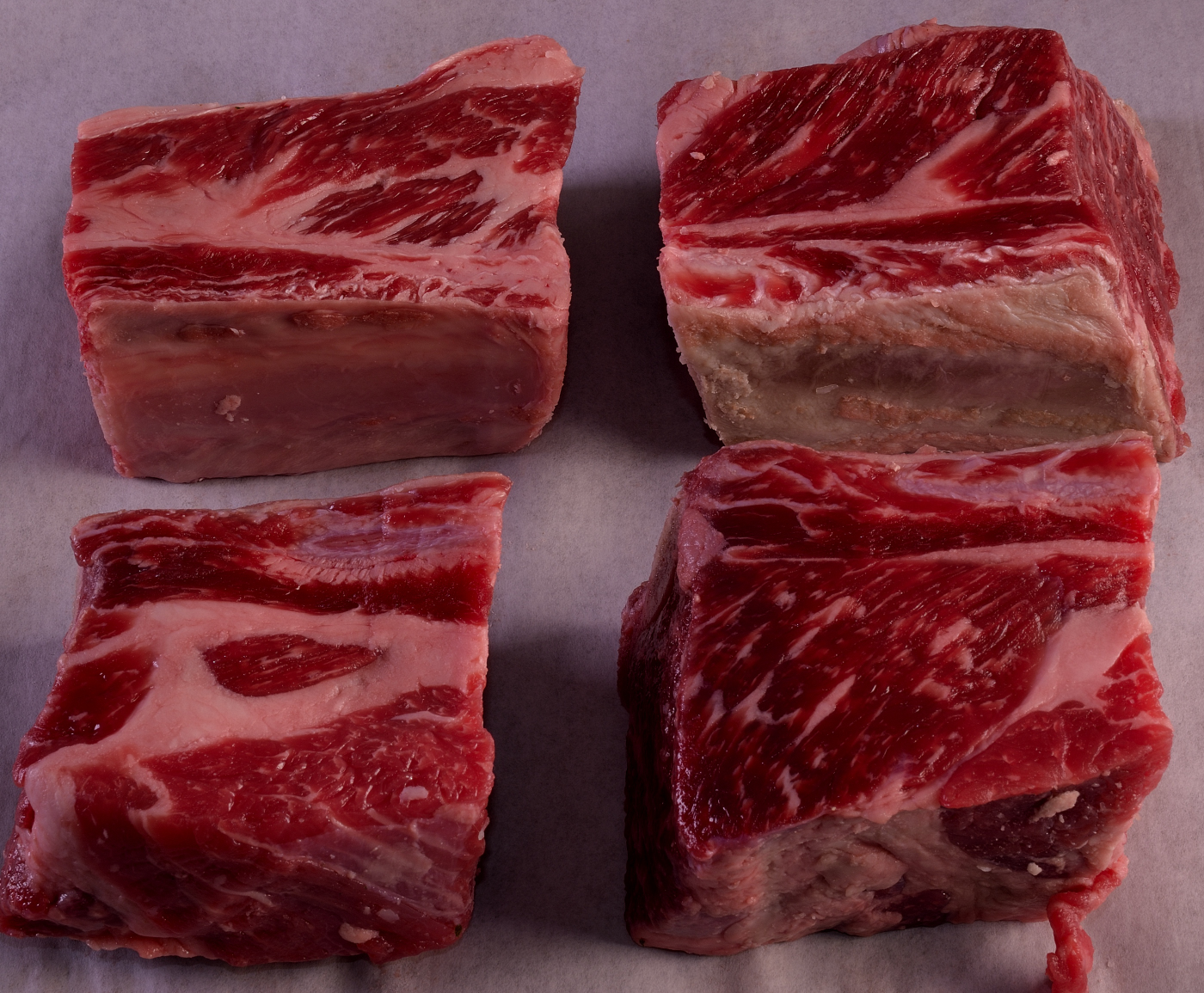 Vacuum seal the short ribs in heat rated sous vide bags and process for a minimum of 48 hours. Measure tenderness in real time utilizing the method explained HERE. Once the ribs are tender, remove from the bath and shock in iced water until they achieve 70 F/21 C. This should take about fifteen minutes. Refrigerate the short ribs at 40 F/4 C while you prepare the other components of the recipe.

Peel the carrots, remove the ends and cut in fourths. Cut the beet, potato and the celery heart into quarters–do not attempt to peel the beets. Peeling beets is much easier after they have been cooked. Vacuum seal all the vegetables. 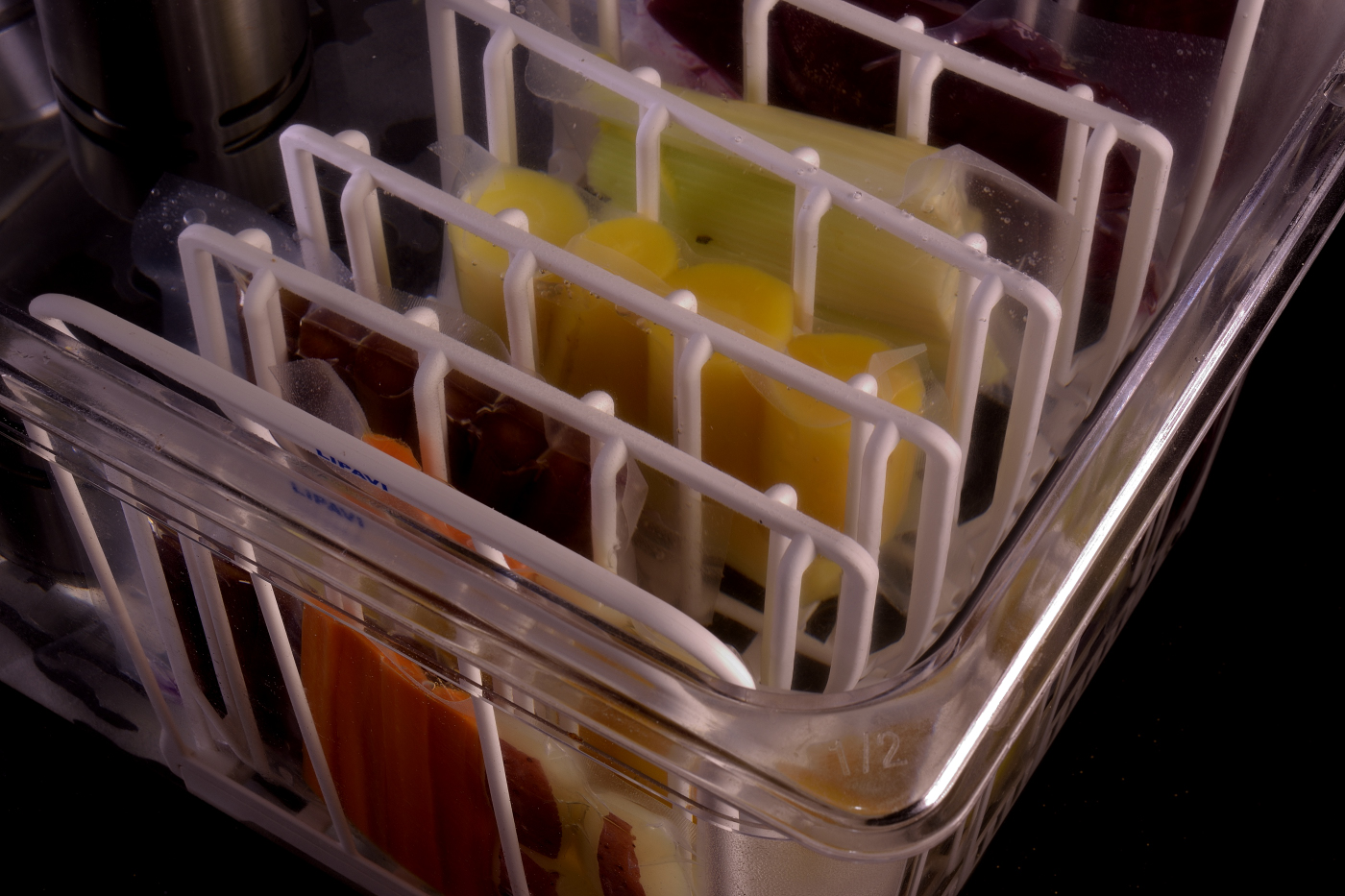 Process in the sous vide bath according to the following guide: 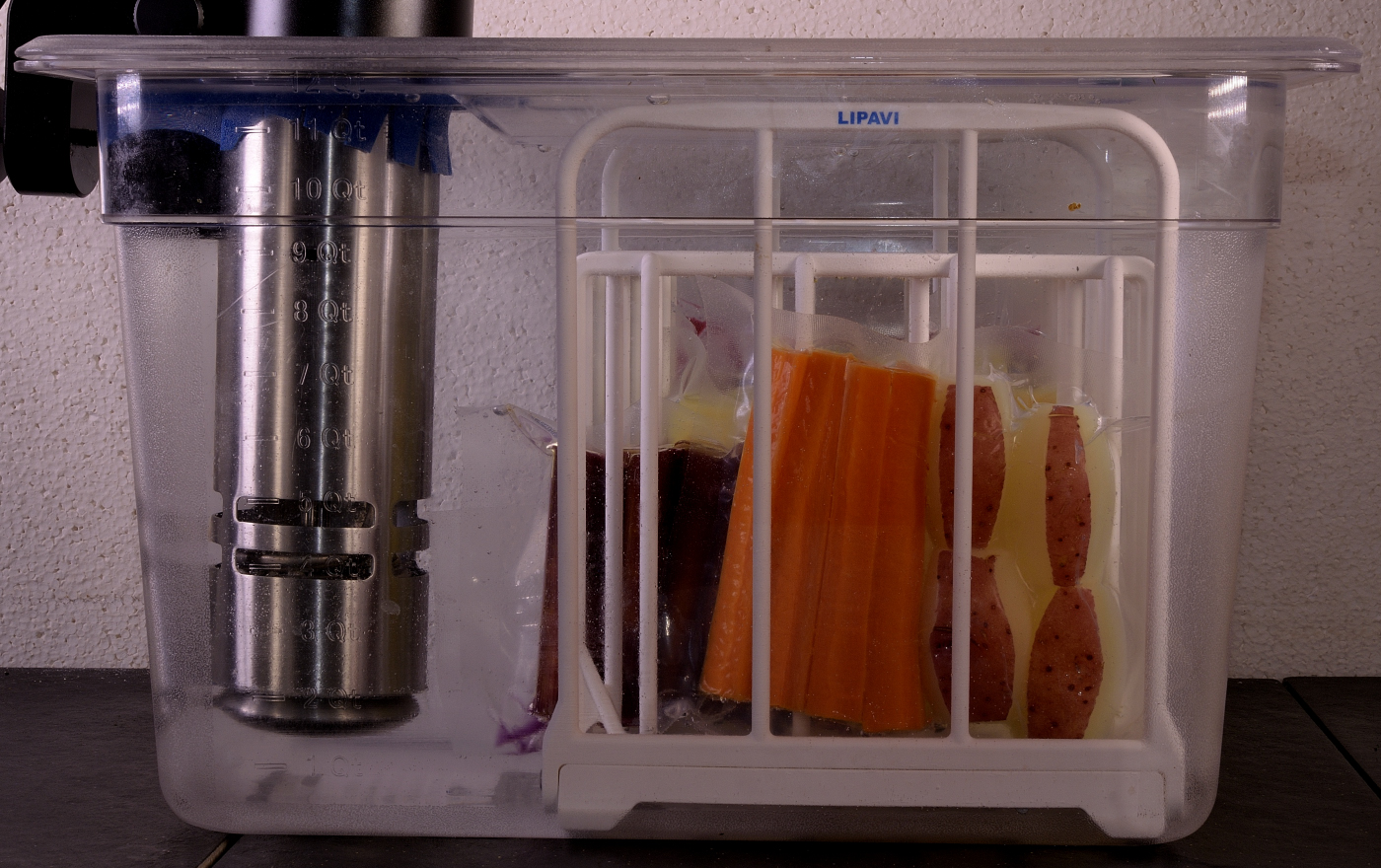 When the interval has elapsed, the vegetables will be somewhat crisp. Shock cold in iced water until the packages achieve 70 F/21 C. Refrigerate at 40 F/4 C for the time being. 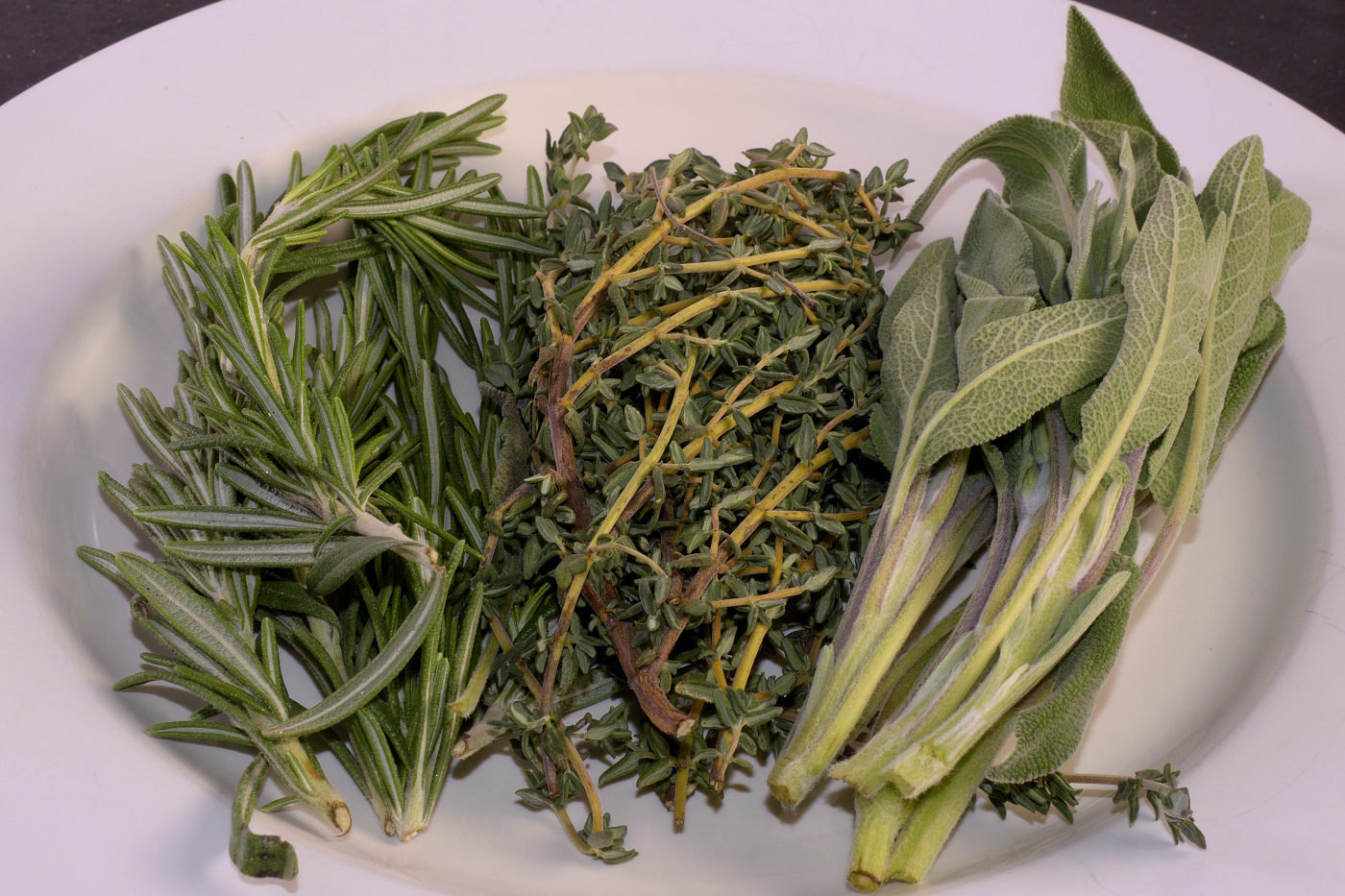 I selected these three herbs because they are readily available in most supermarkets. 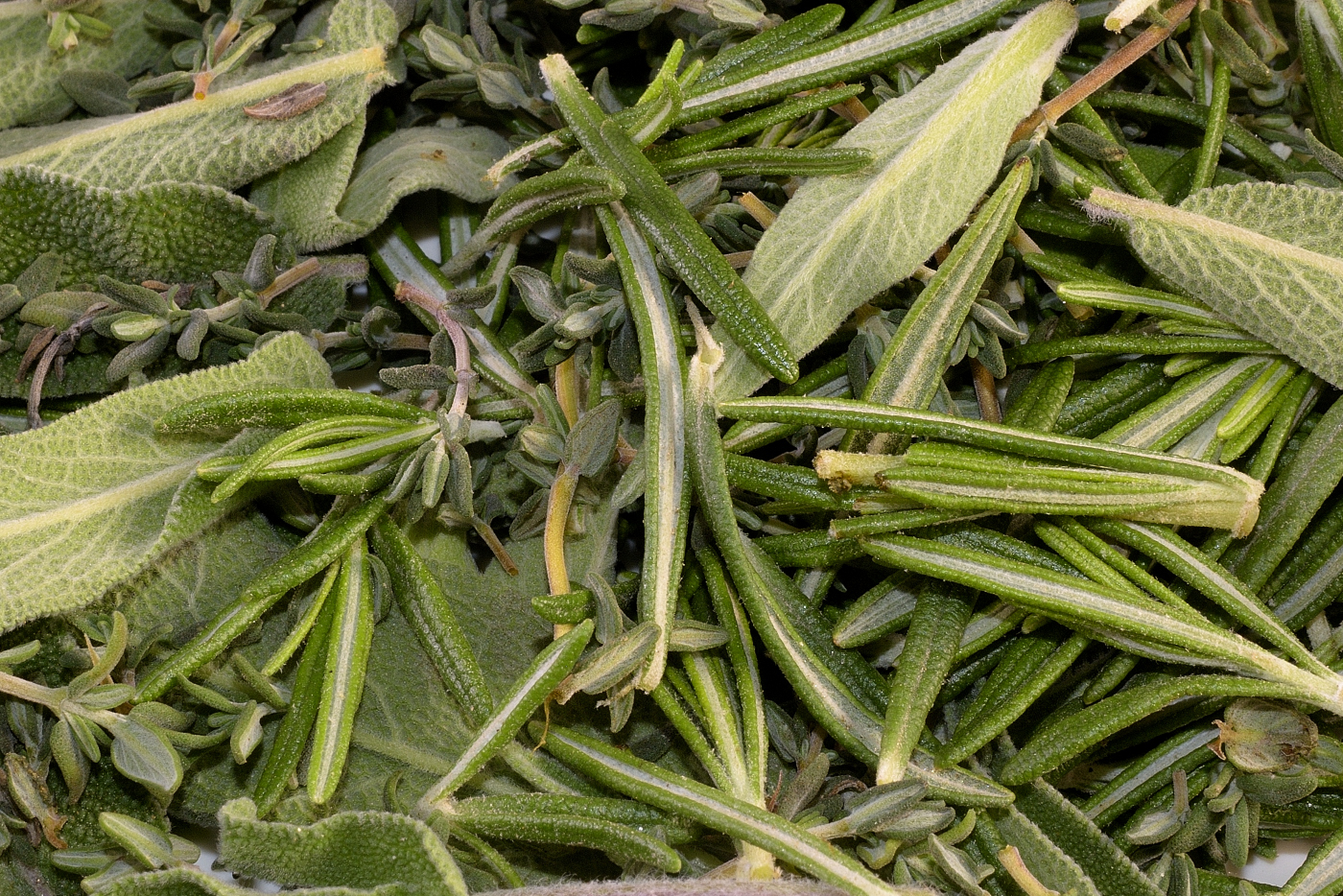 Remove the stems. There is no wrong or right way to accomplish this tedium. Gently drag your fingers down the rosemary/thyme stems from the flower end towards the stem end and most of the buds will fall off. That at least makes the best of it. The sage is much easier. Most cooks take this assignment to be punishment but it’s a great job for idealistic kitchen helpers who aspire to advancement. If anything will scare them straight, this will do it. 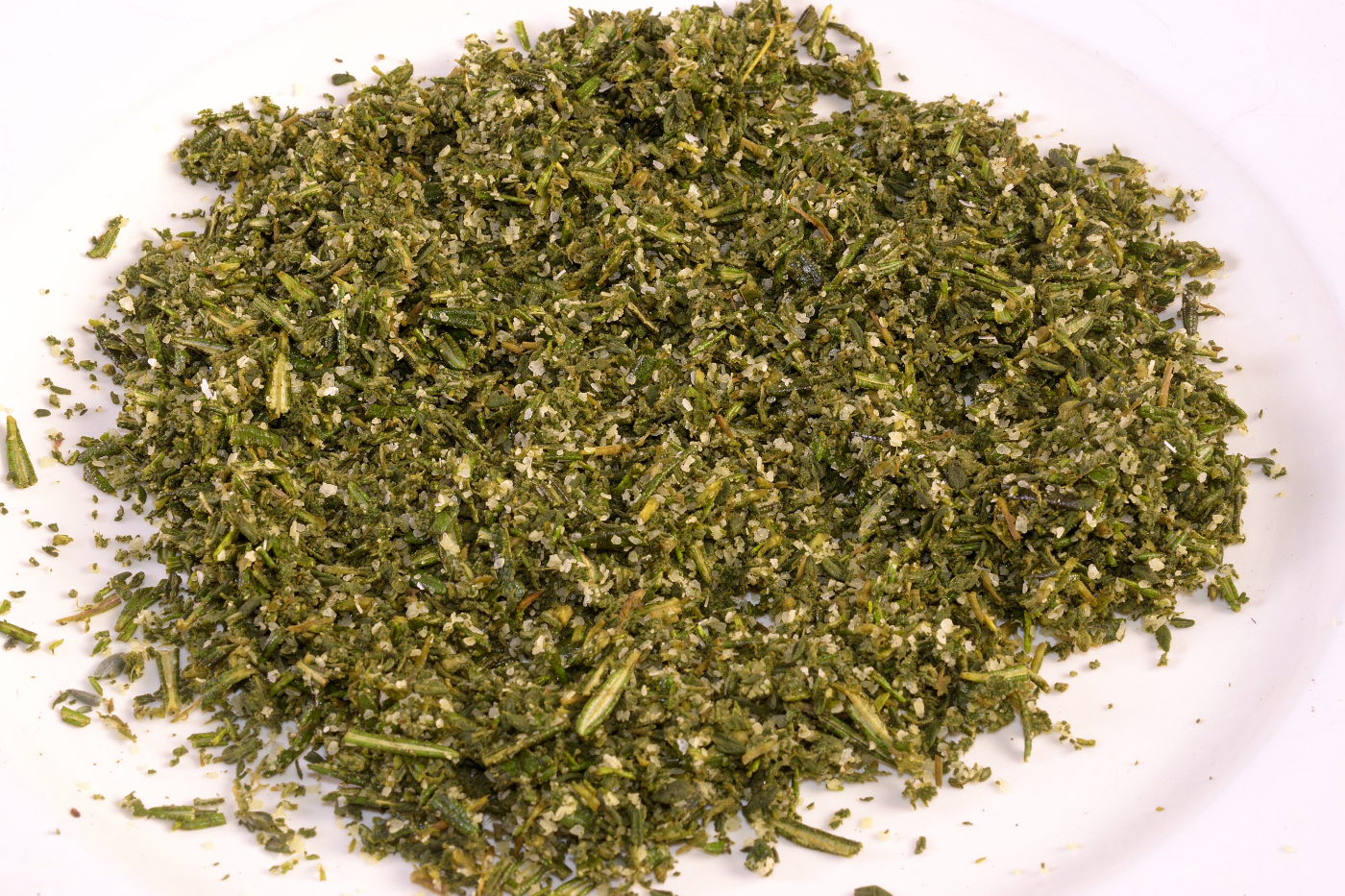 Chopping the herbs can also be tedious and whoever invented the food processor deserves a medal. Even so, I add a Tablespoon of kosher salt to the mix during chopping. It increases the friction in the hopper and minimizes clumping. 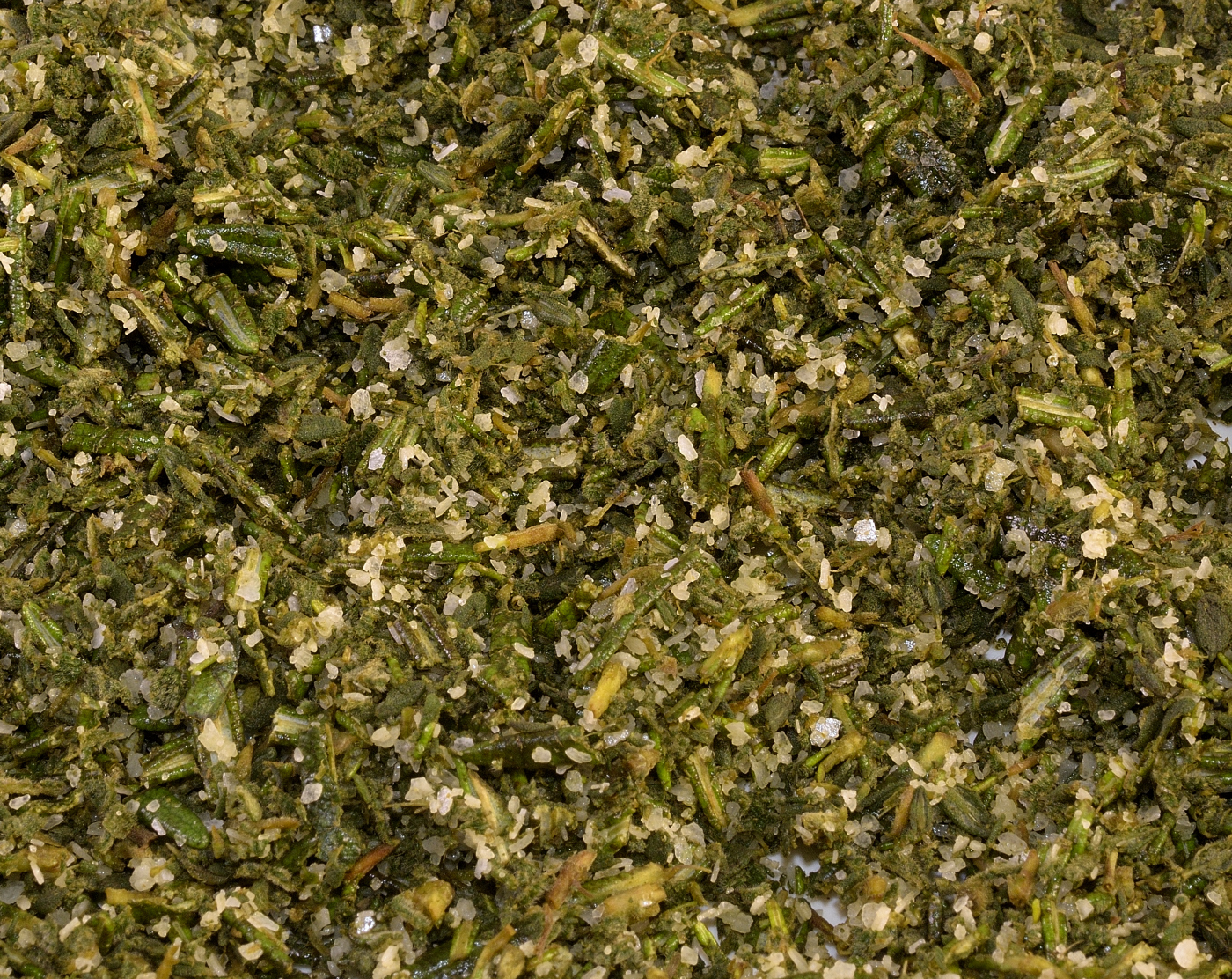 Take a picture while it’s still green, because it will start to darken almost immediately. 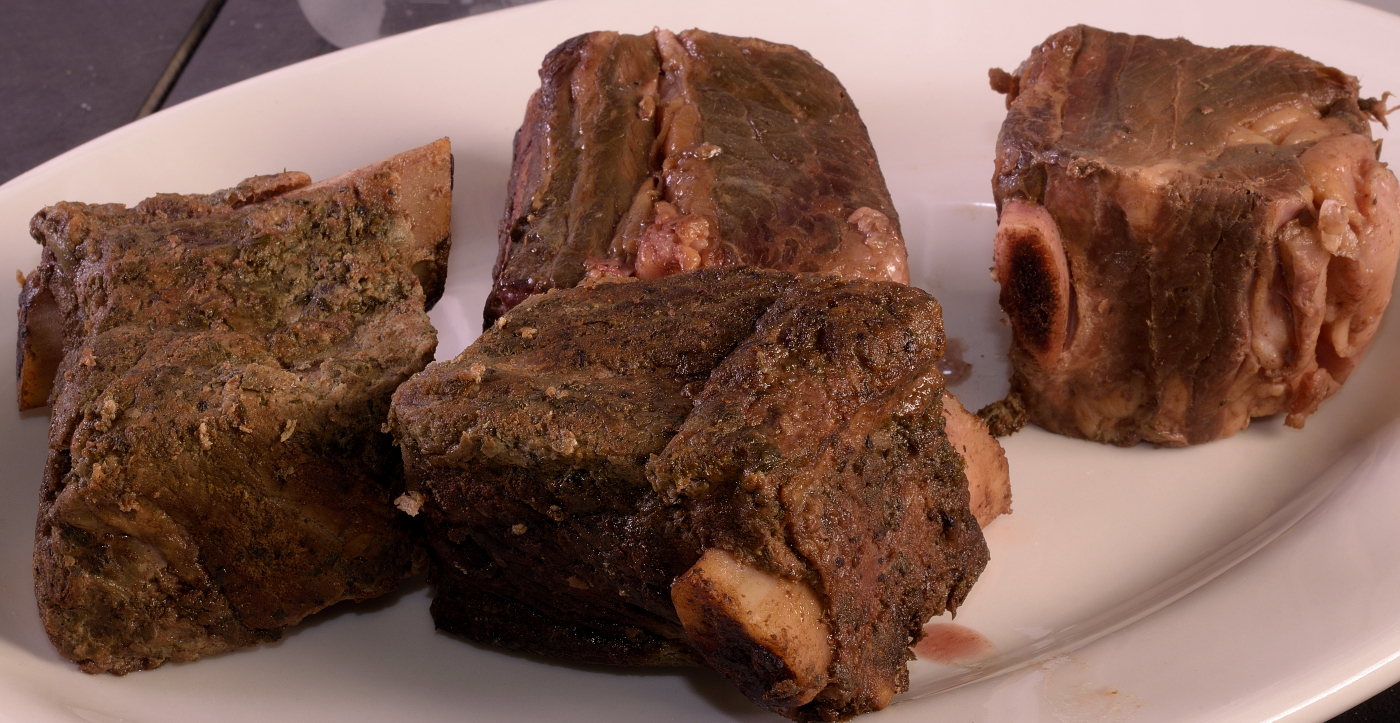 Dip the packages into hot tap water for 2-3 minutes to dissolve the gel. Remove the short ribs from the packaging and harvest the juices. Process the juices according to the method explained HERE and set aside. The short rib on the left end and the one in the front were prepared according to the method explained HERE. The other two were simply vacuum sealed and processed at 140 F/60 C for 48-60 hours. 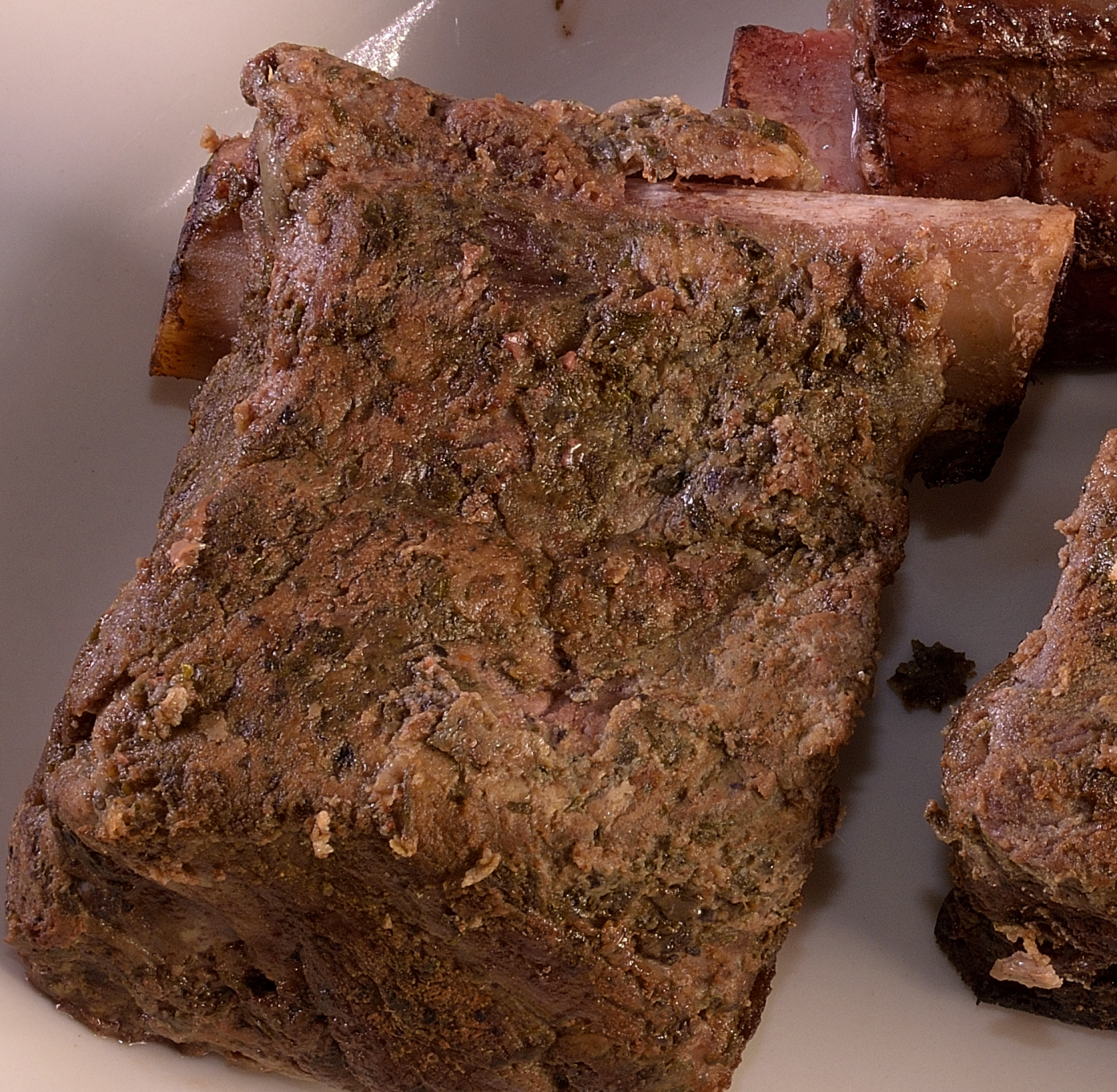 Above: pre-seasoned and seared before processing. Below: sealed and processed “naked,” my personal preference. Why? 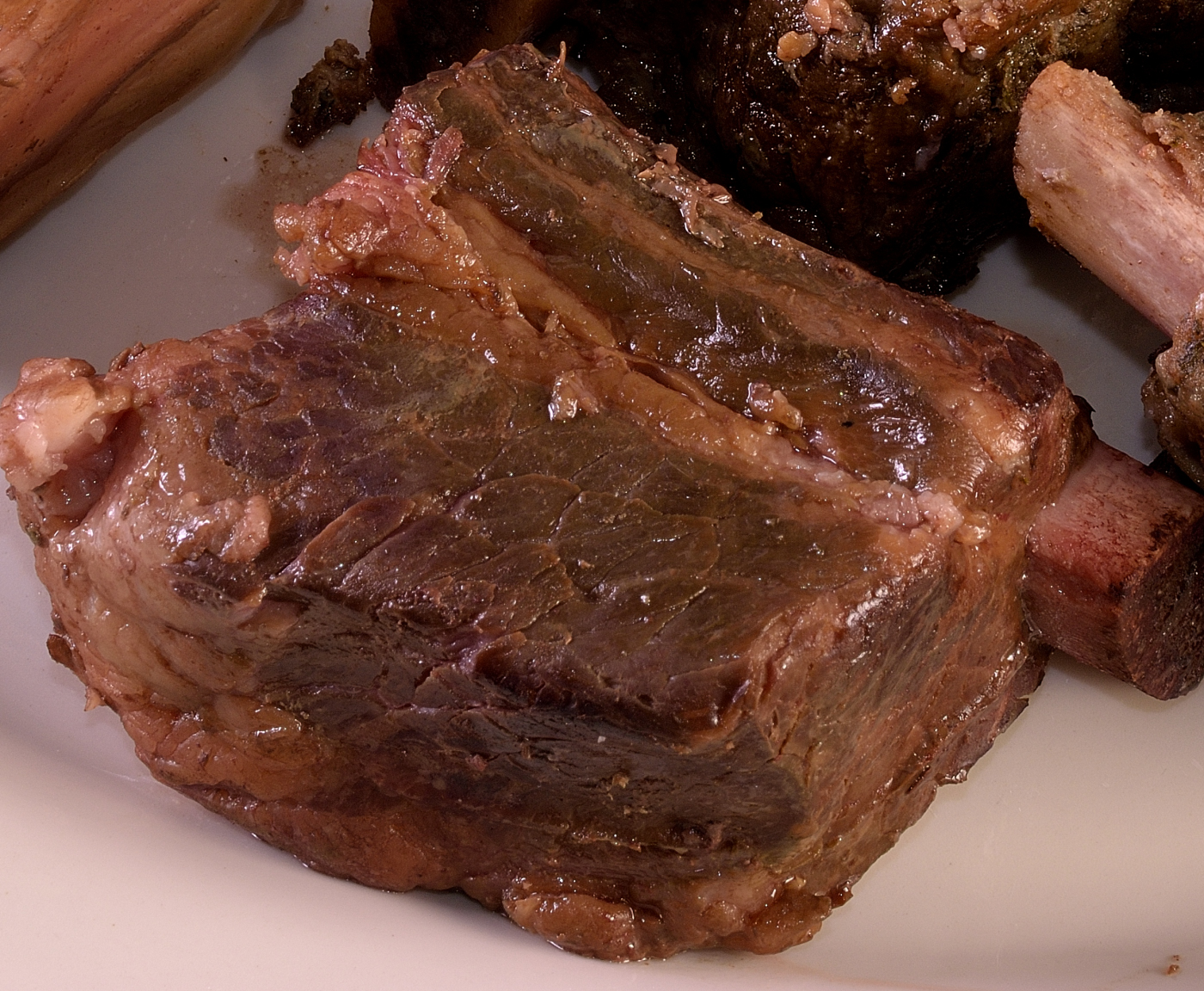 It is absolutely safe to add seasonings to the bag and/or pre-sear. The benefit is debatable. Salt is the only flavoring that can penetrate the surface of the protein matrix–other flavorings/colorings simply dissolve into the juices in the pouch. Exposing the meat to salt before processing for a few hours or more will allow the salt to begin to travel towards the center. Keep in mind that this may trigger the curing process, causing noticeable changes not only in appearance but in texture and flavor. Beef may take on the appearance of having been “half corned.” Ultimately, I find it easier to flavor the meat AND the Sous Jus after processing. 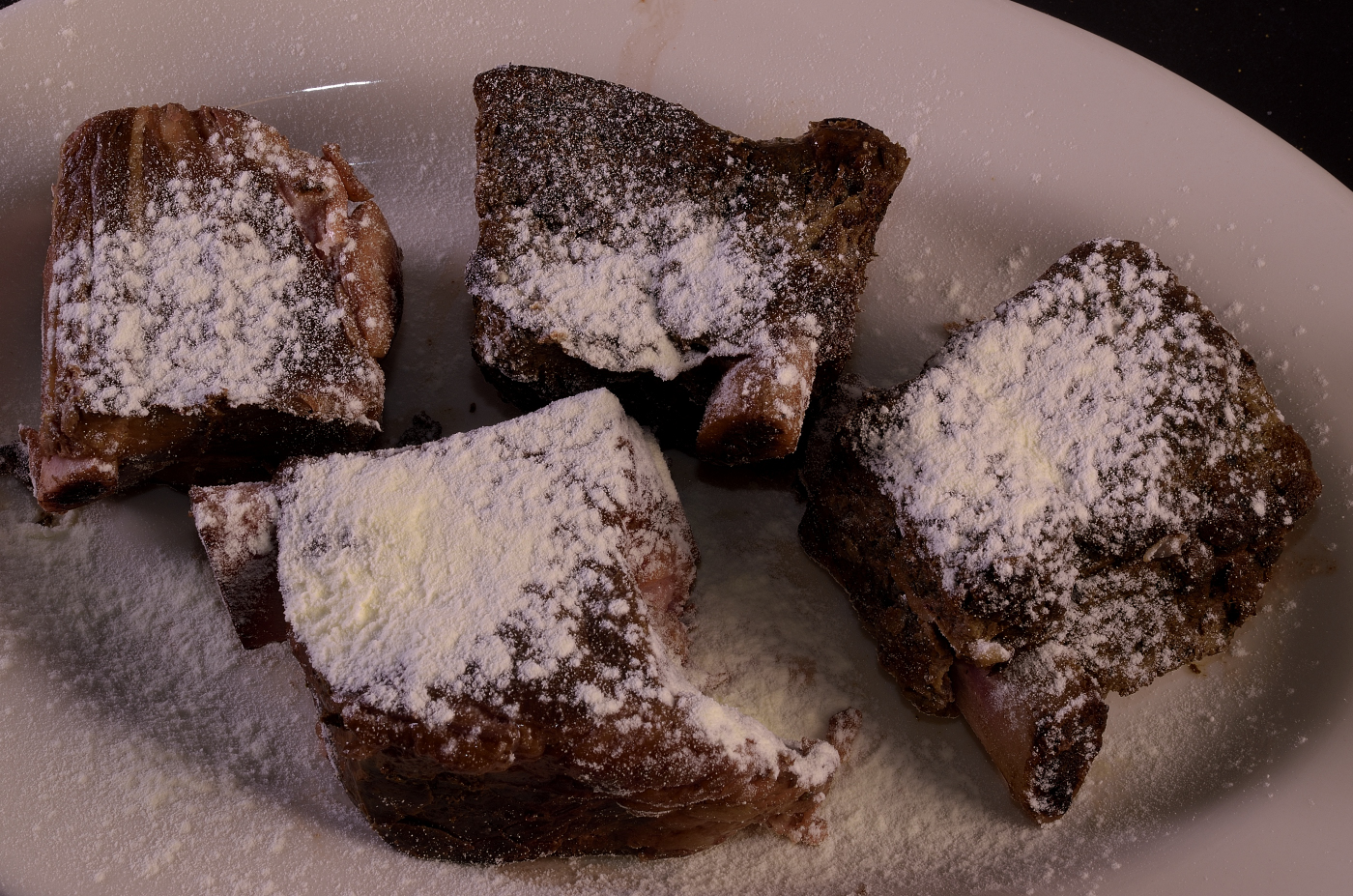 Dust the surface of the short ribs generously with powdered egg white. Fresh egg white can also be used–combine one egg white with 1 oz/30 ml of water and beat well. 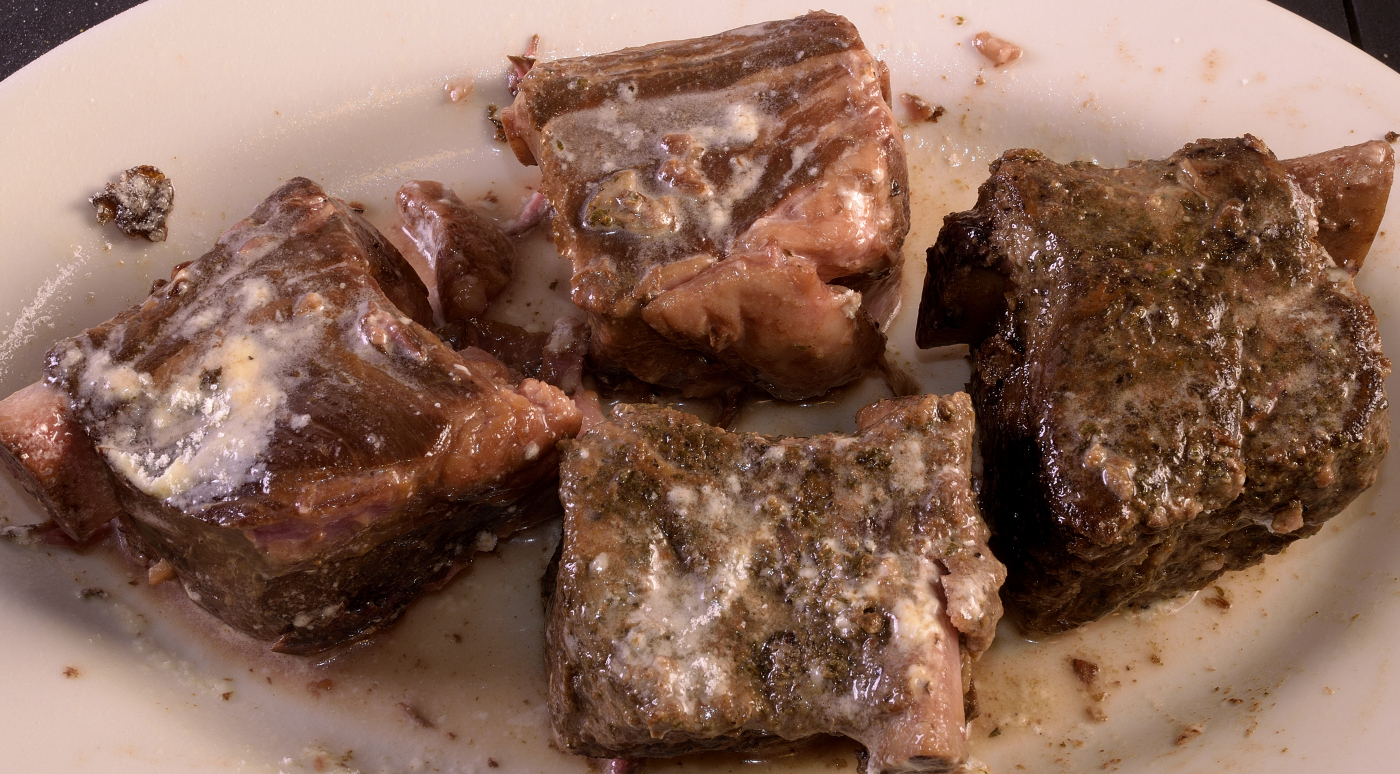 Mist the ribs with water and tumble well with gloved hands until the ribs are completely coated (not necessary if you are using fresh egg whites). 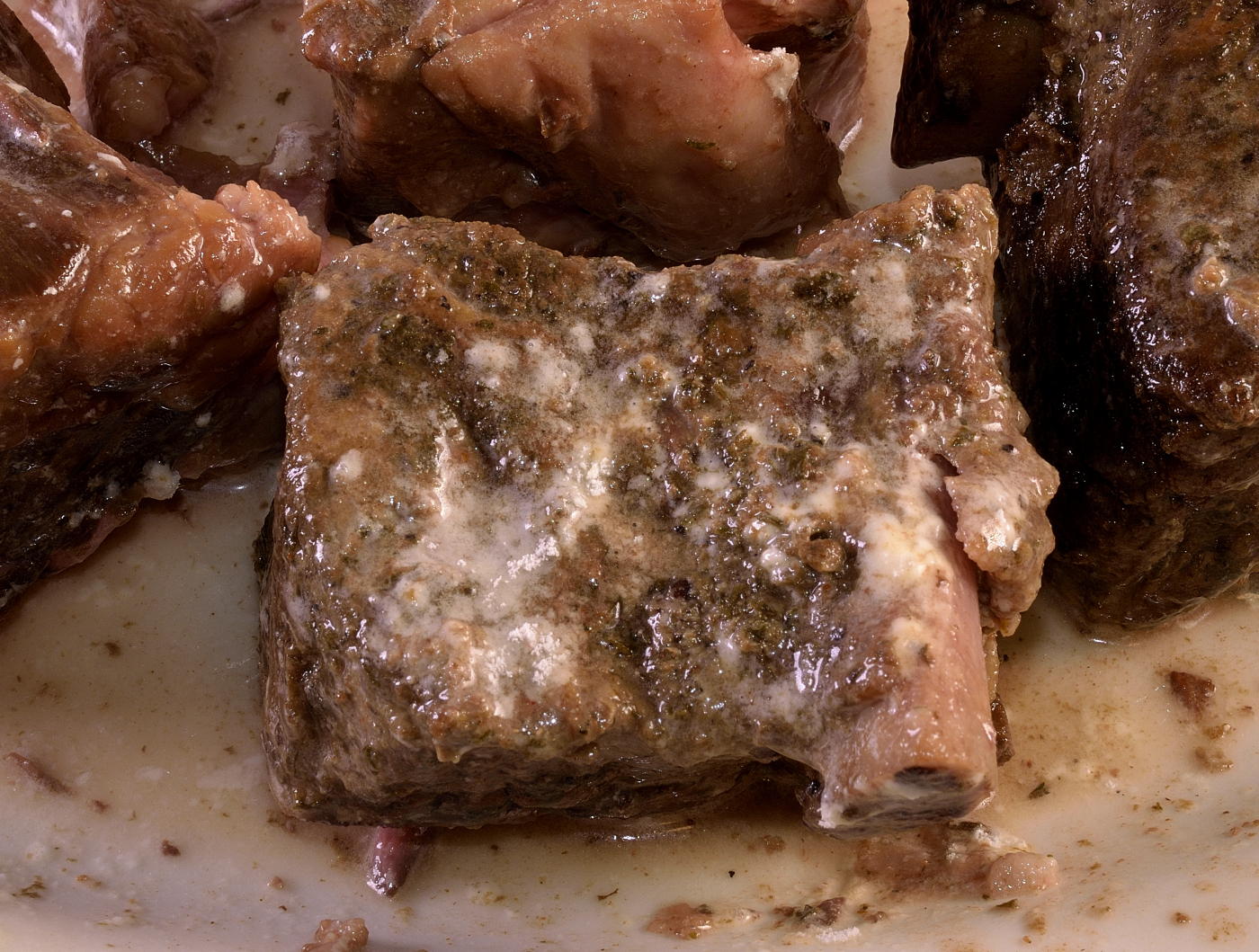 It’s a dirty job, but somebody has to do it. Squeamishness about the texture is another litmus test for misguided cooks-in-training. 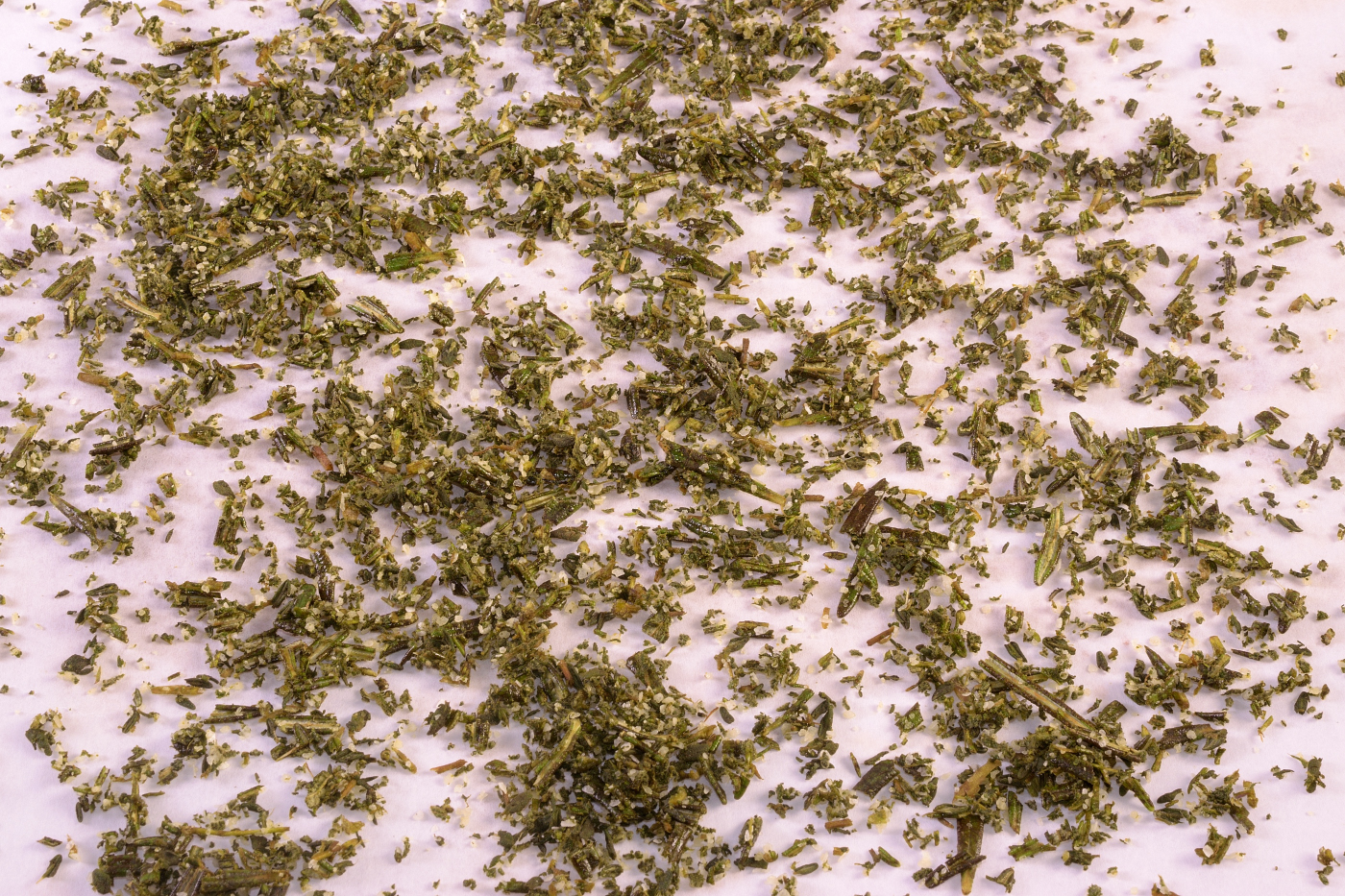 Sprinkle about a third of the chopped herbs/salt mixture on parchment or aluminum foil. 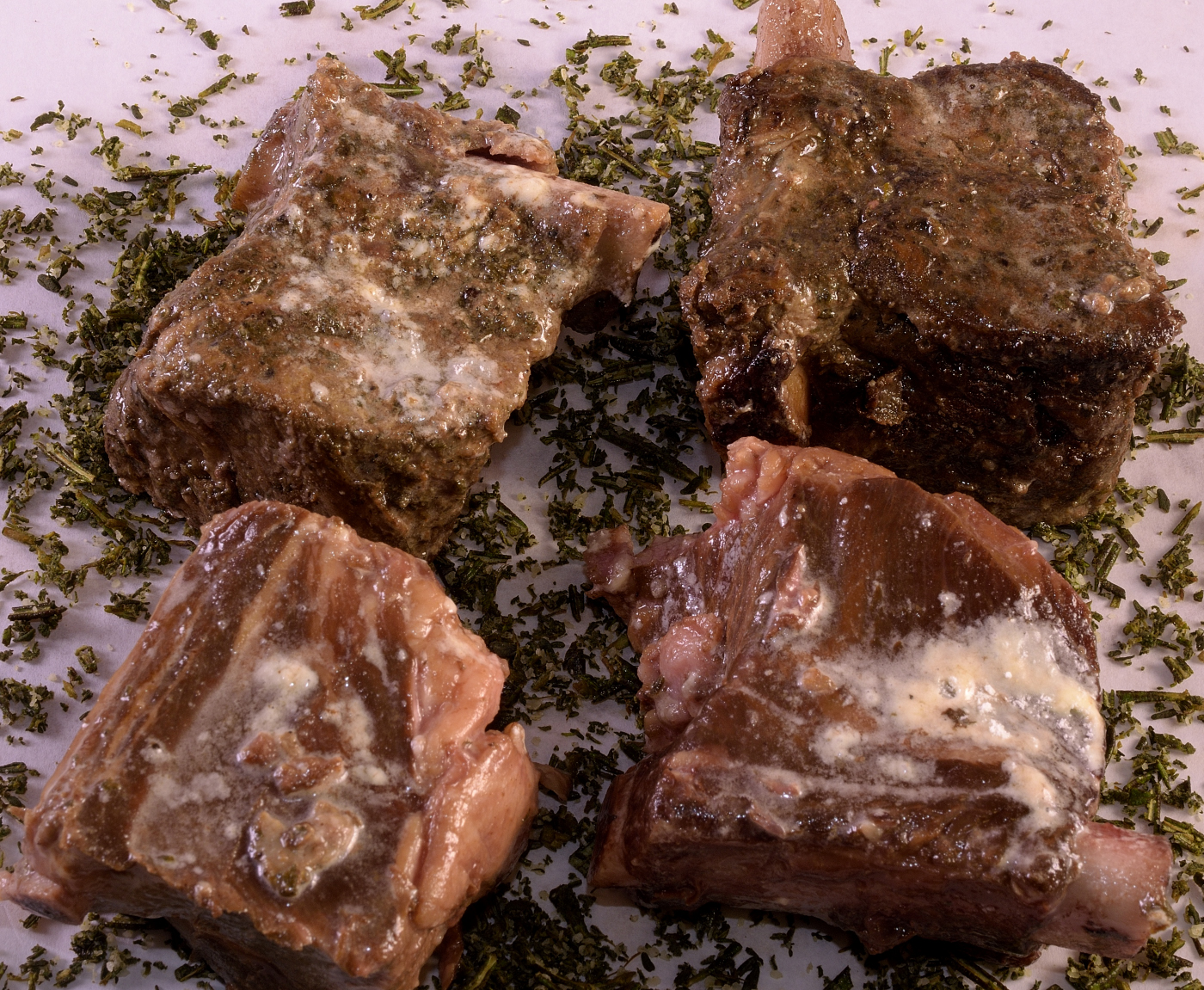 Lay the ribs on top. 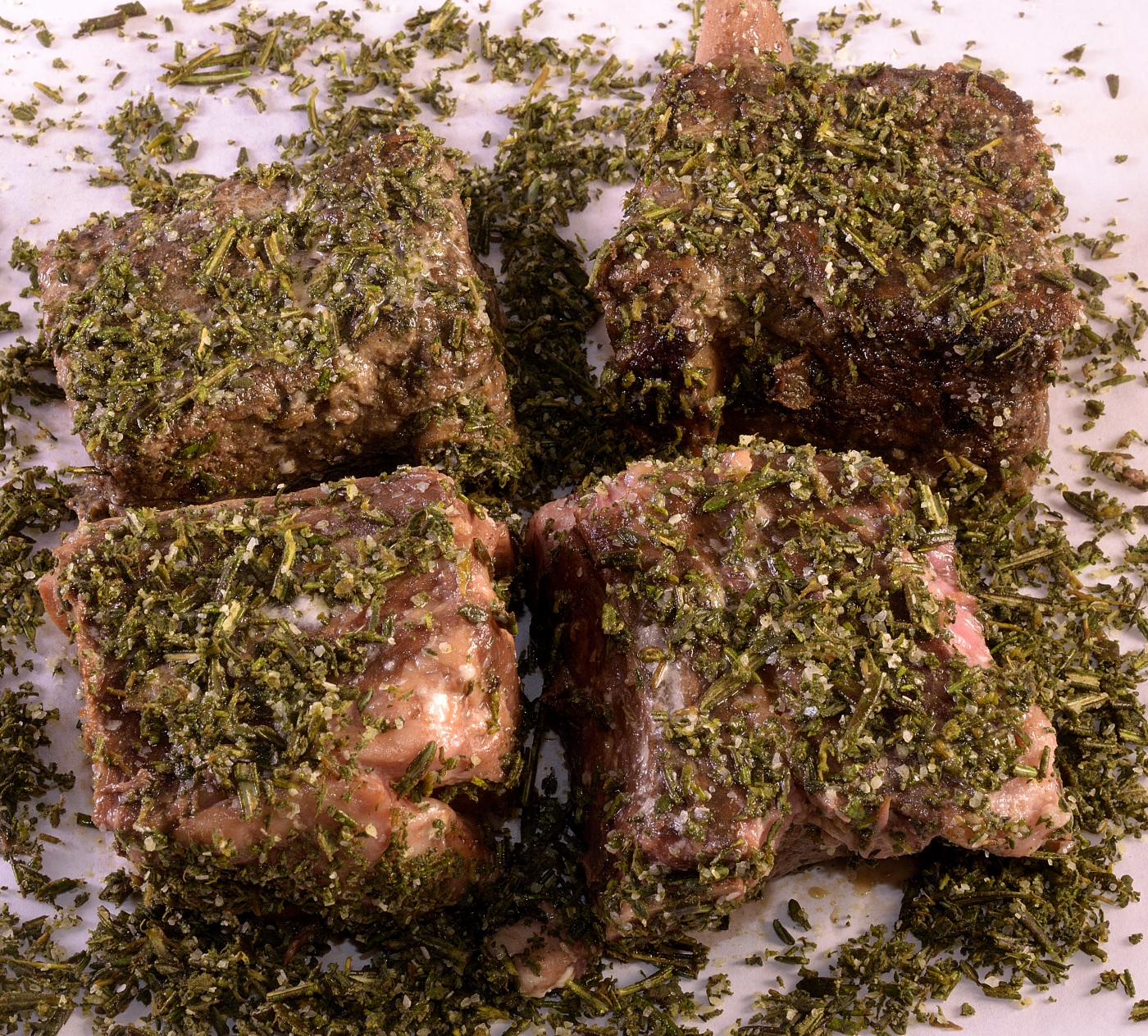 Sprinkle the remaining herbs on top of the ribs, and carefully “roll them around” to attach as much of the mixture as possible. It’s one of the curses of contemporary stylings. 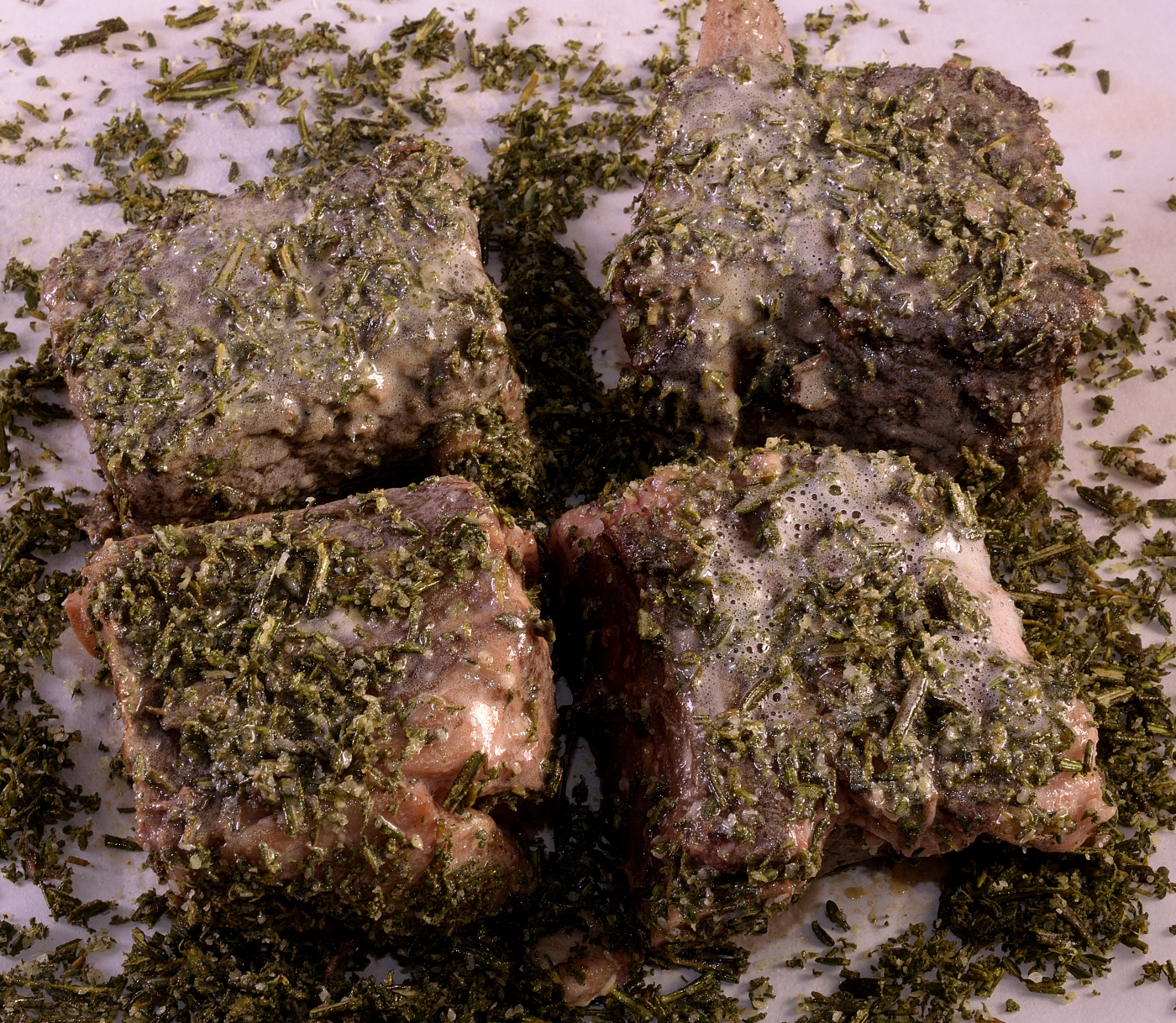 Spray with spray release (PAM) and set aside for the moment. 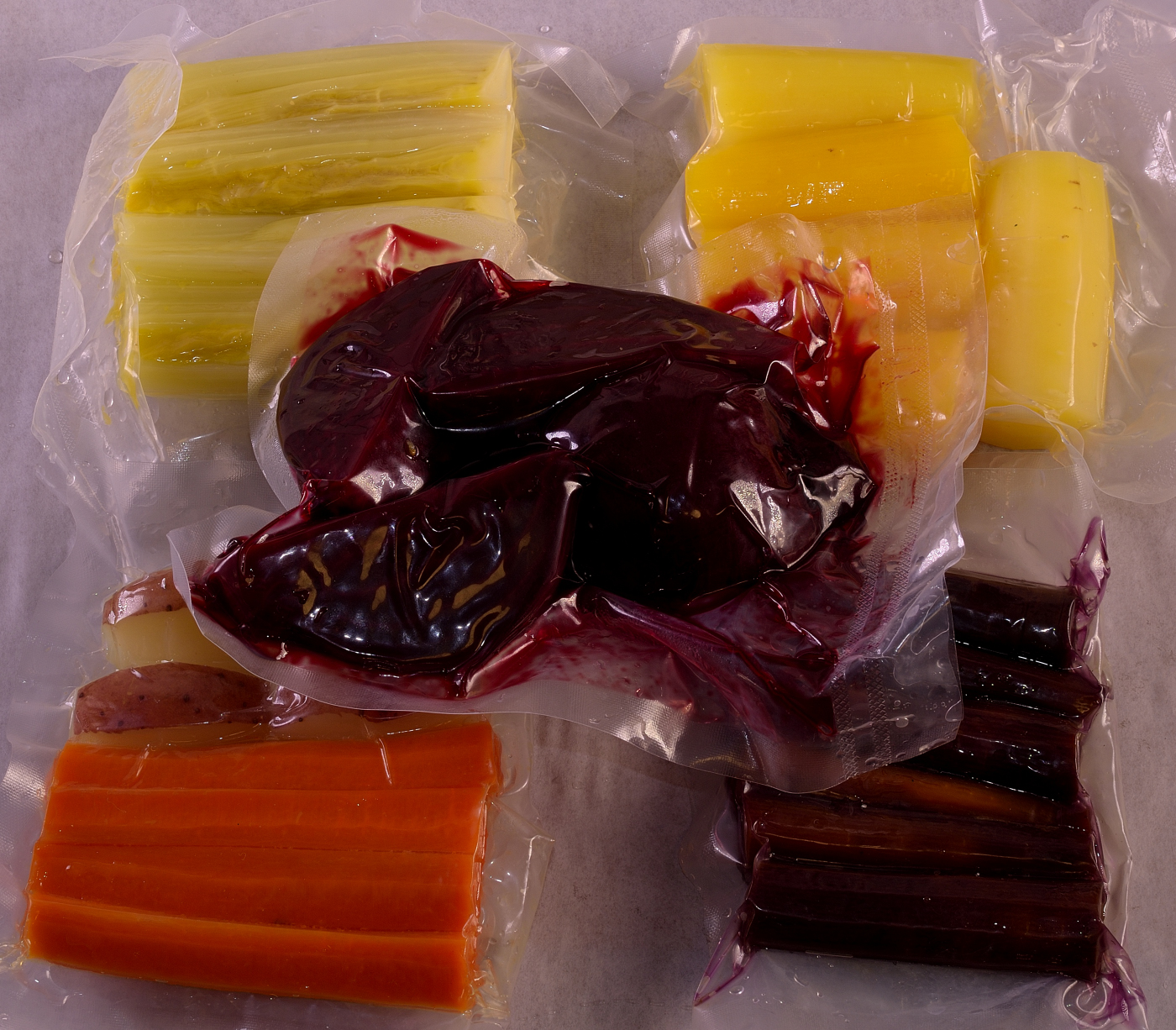 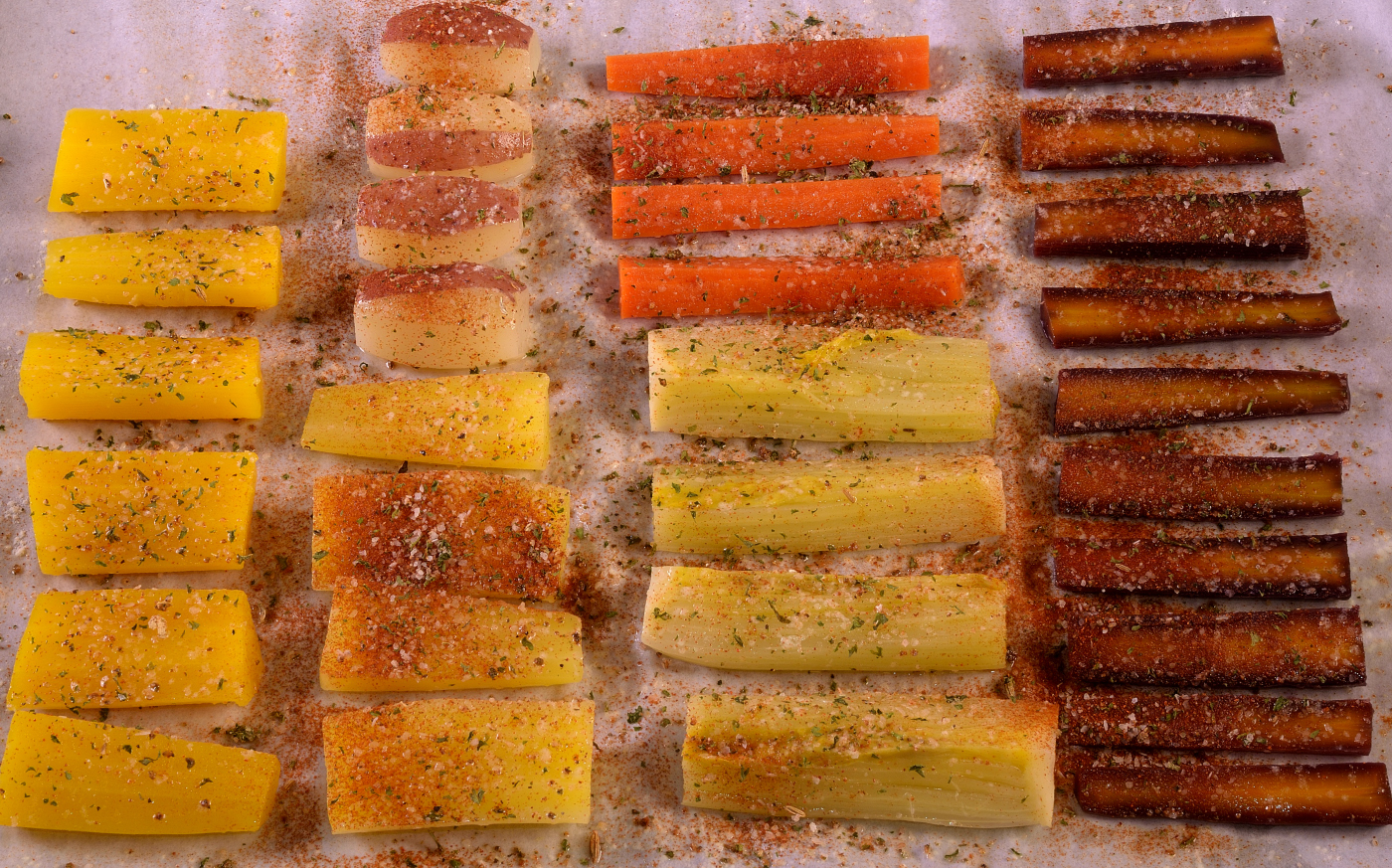 Remove all the vegetables from the packaging EXCEPT THE BEETS. Set the beets aside for now. Beets stain everything they touch, including latex gloved hands. Line a cookie sheet with parchment and spray lightly with pan release or drizzle with oil. Arrange the vegetables on the parchment. 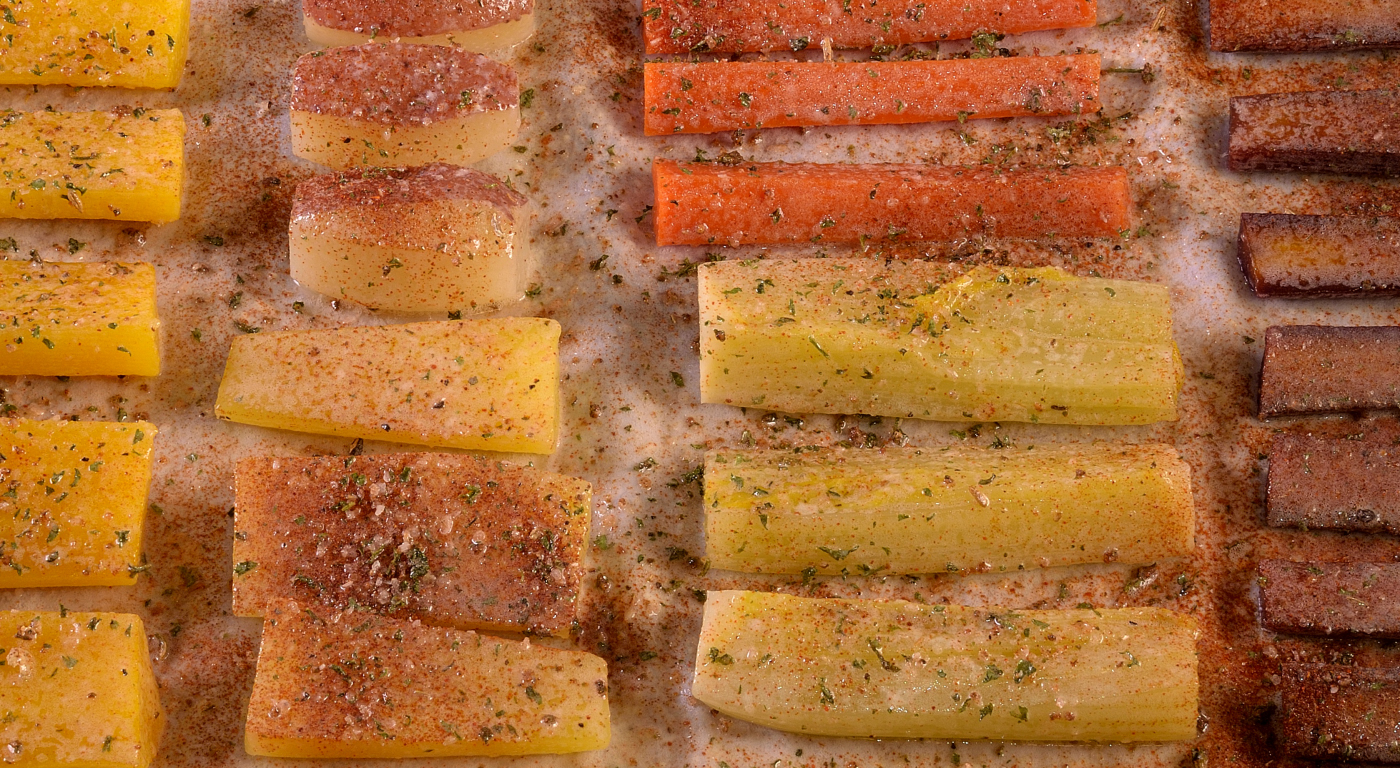 Tips and Tricks: the surface of vegetables is not typically sticky enough for seasoning to cling to. As has become my standard, mindless practice, I dust lightly with powdered egg white and mist with water. VERY lightly. We’re not making and omelet here. Season the vegetables. Set aside. 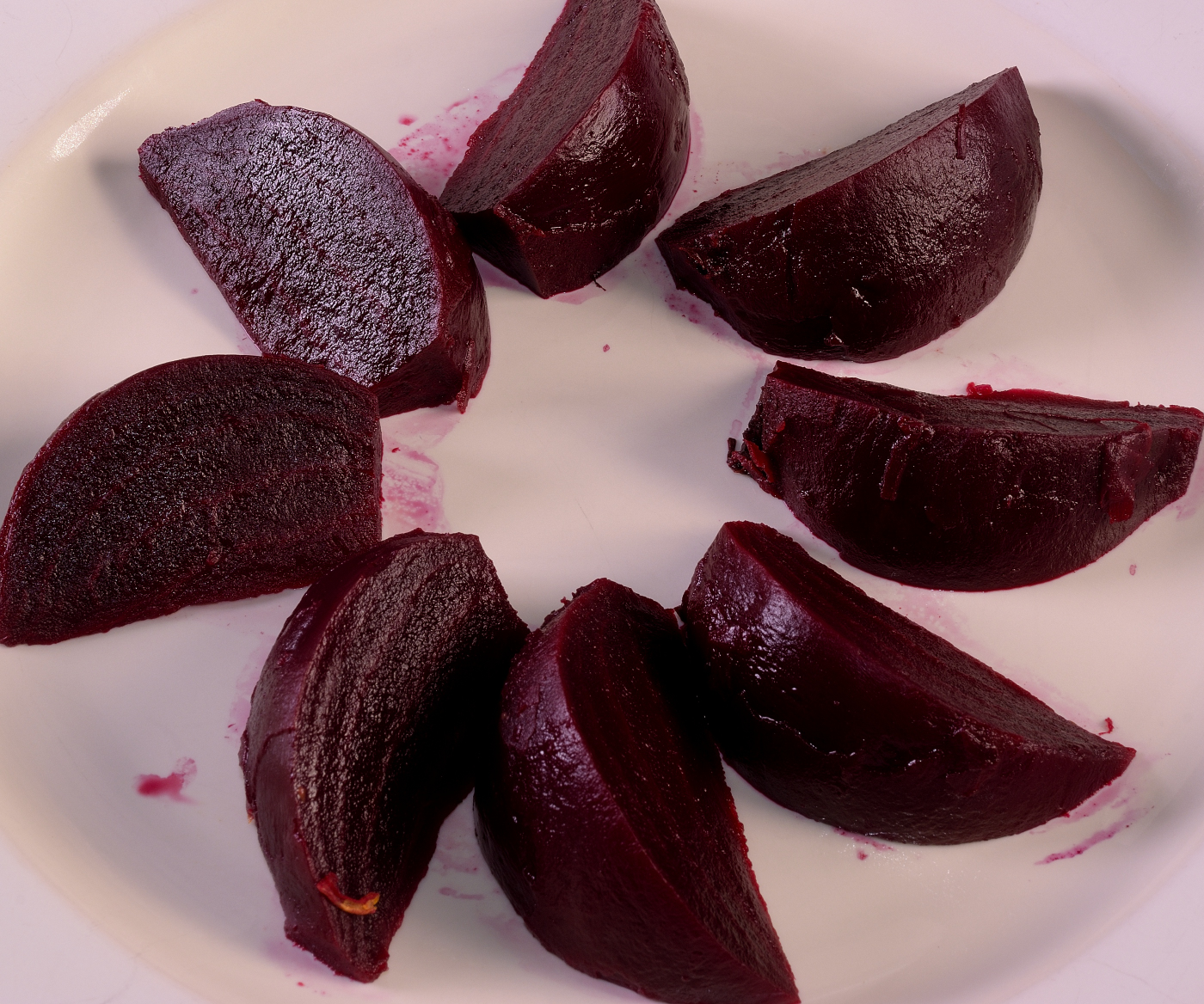 Rub the skin side of the beets with a wet towel under running water (or in a small vessel) and the peel will come off. Trim the tips as needed and arrange on a plate. You can see that even now the beets tend to “leak” onto the surface. 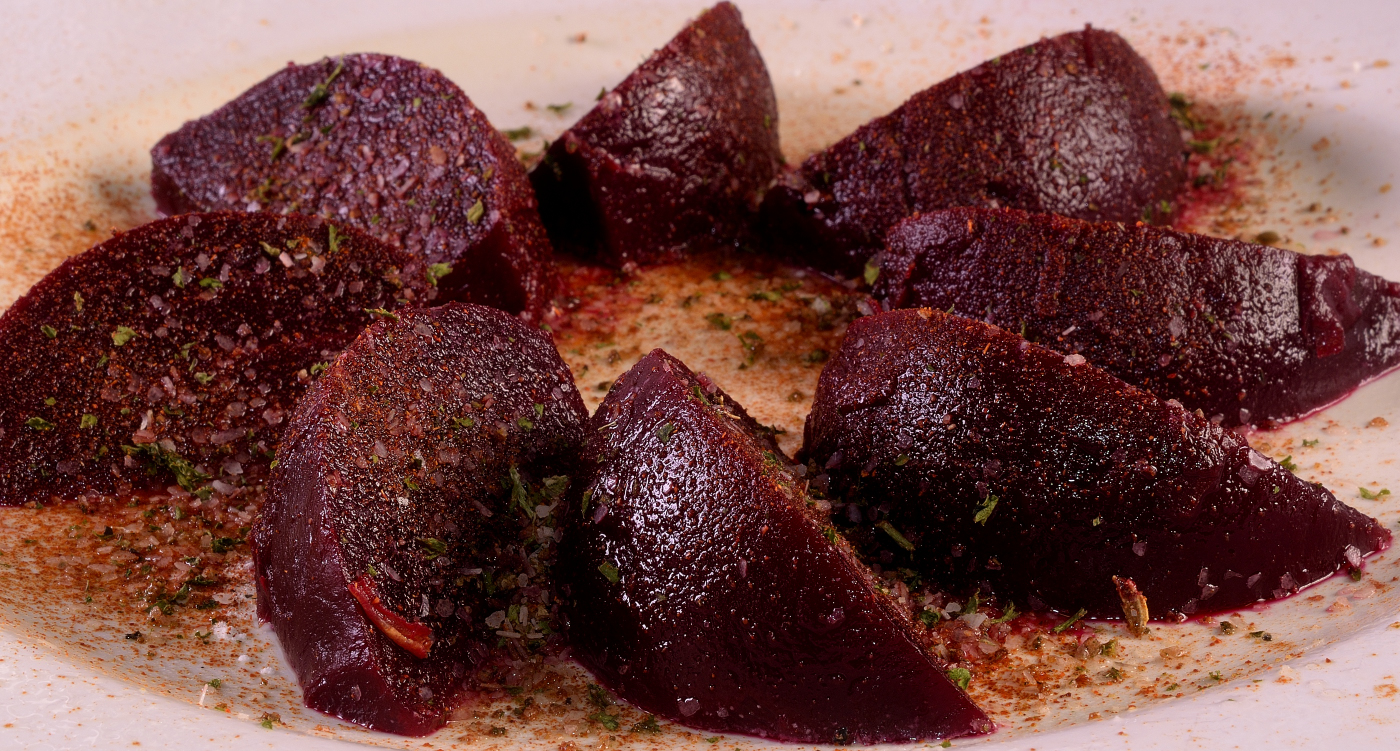 Again with the powdered egg white and the mist. You can see there is not enough of either to collect on the plate. 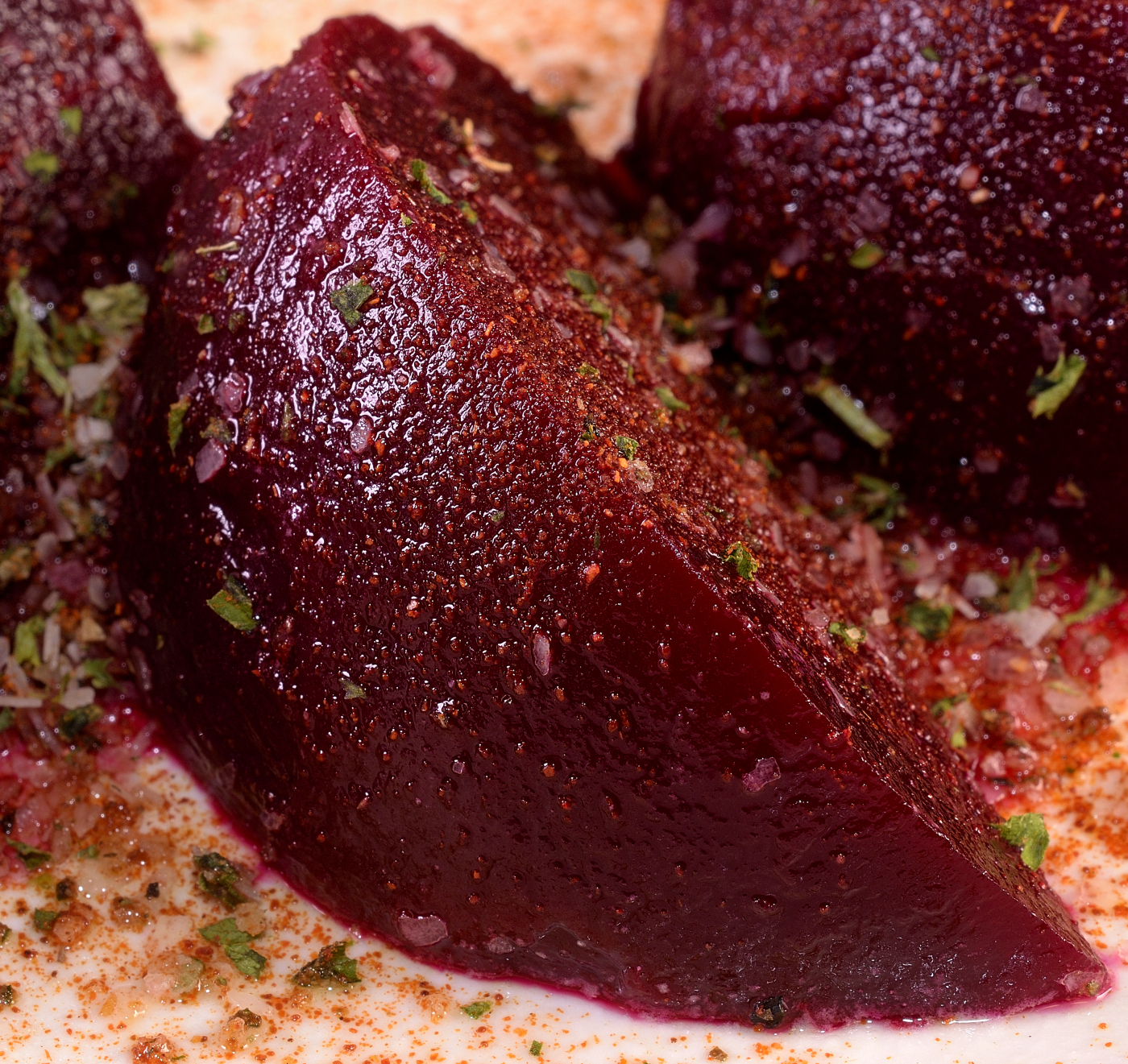 Season the beets. Okay, NOW you can carefully arrange them on the pan with the other vegetables. Be careful not to let them touch each other.

Stage the ribs and the vegetables in the oven and roast for thirty minutes or until the ribs are hot and the desired visual effect has been achieved. The ribs should be crispy on the outside, and the vegetables should be lightly browned. While you eagerly await your masterpiece, attend to the sauce(s). Sauces for a rich dish like this should be very simple. I combined 0.5 cups/125 ml Balsamic vinegar with an equal amount of molasses and reduced by half until it achieved the syrup stage. Be careful not to burn it! Stage into a squirt bottle and allow to cool somewhat. I combined 0.5 cup/125 ml of one of those generic pepper vinegar sauces that Eli Manning puts on everything with an equal amount of Sous Jus, brought it to a boil and incorporated 1 oz/30 g of cold butter. This was also transferred into a squirt bottle and off we went. 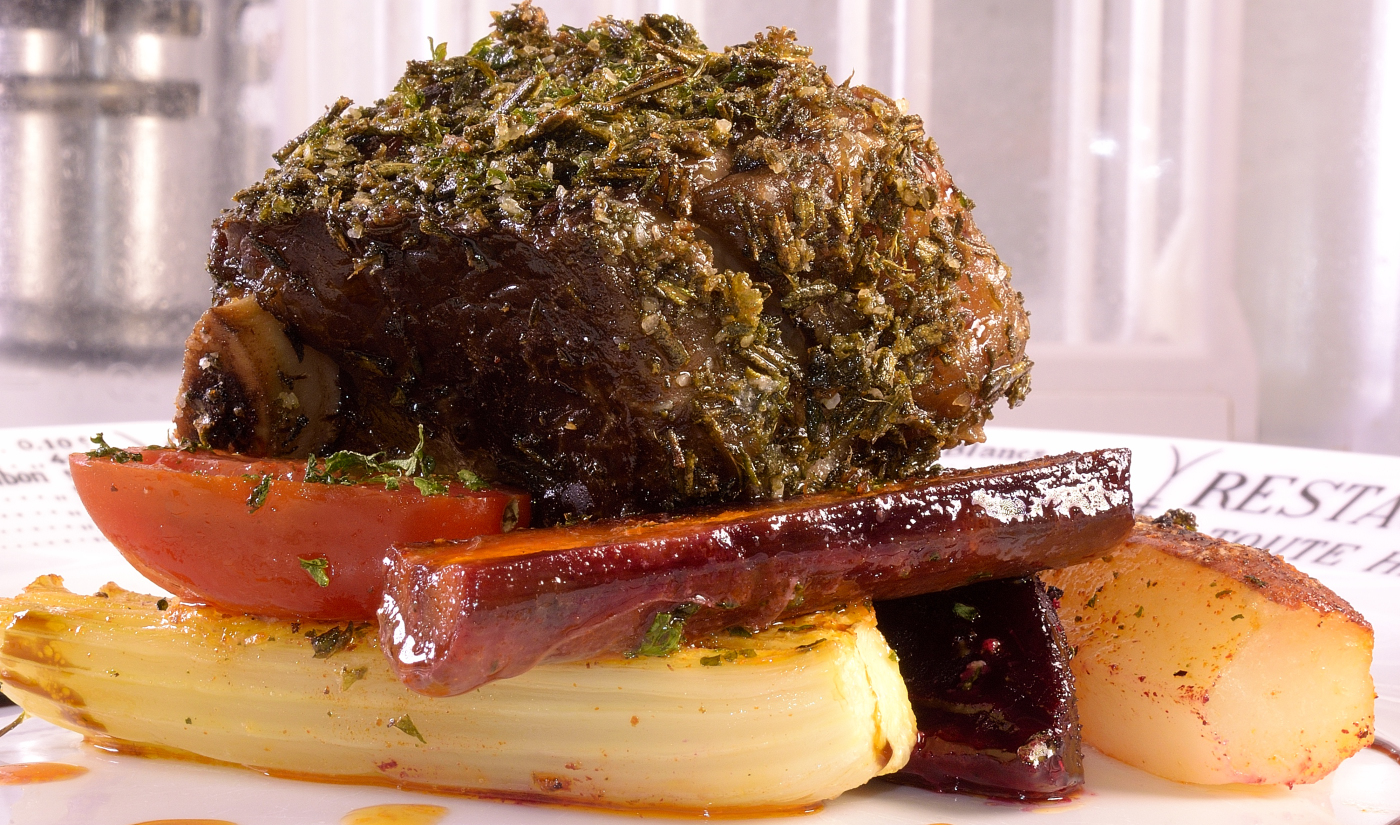 You can see that the crust is quite substantial. Restaurant versions never seem to come out like that, and for good reason. It is a lot of time-intensive work. For us, it’s fun–we do it by choice. For professionals, it is budget-straining monotony of the highest (or lowest) form. Sauce the plate. Try to make a flat nest in the middle of the plate that will accommodate the irregular shape of the protein. The rest depends only on your imagination. 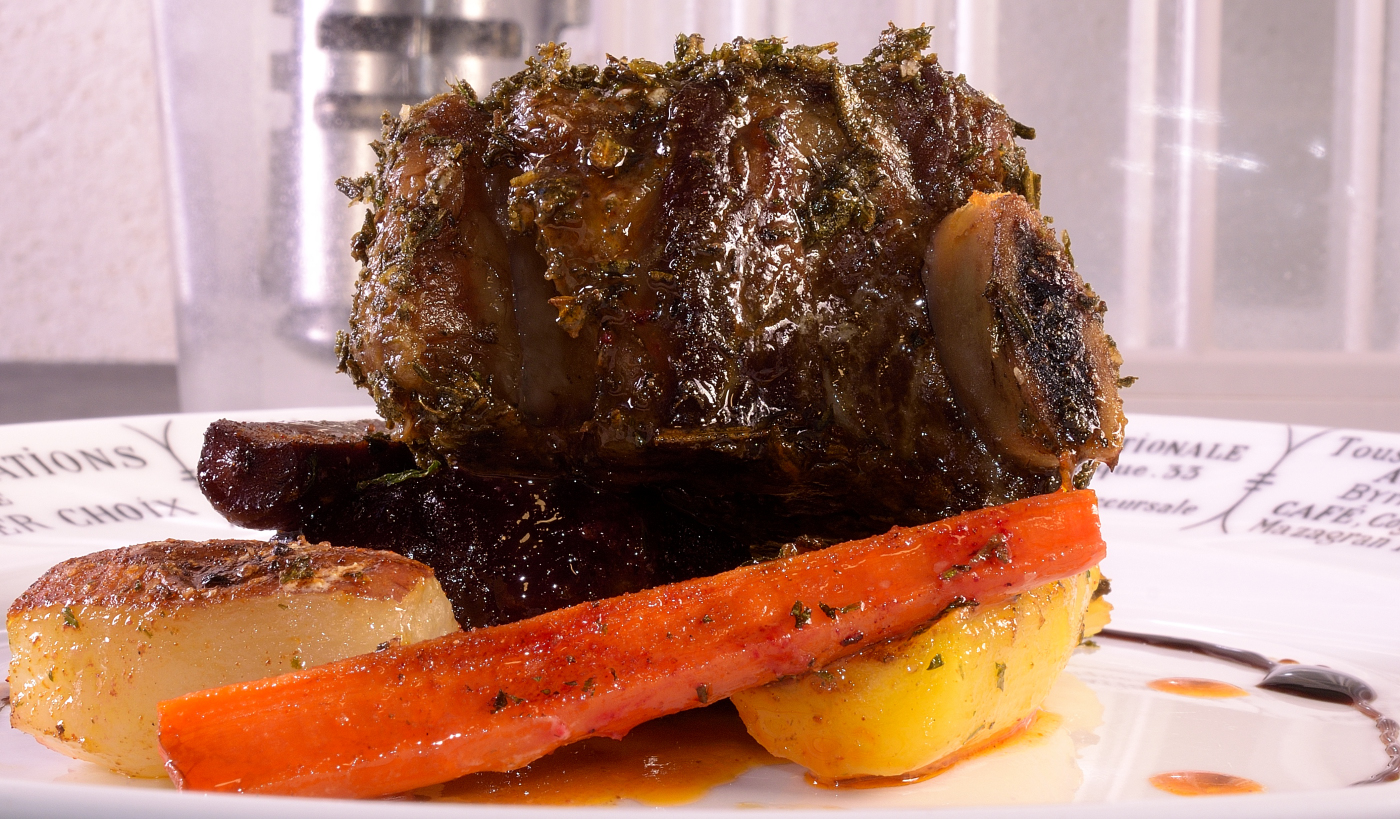 You see “chefs” plating dishes on tv or in mags and they are always hunched over, tweezers in hand and scowling like college basketball coaches. Imagine doing that non stop for a three or four (or five) hour dinner service. It’s not necessary. Put on your glasses and stand up straight. Use a high table, or, good heavens, put a box on the work area so you can get to the plate without wrecking your back. 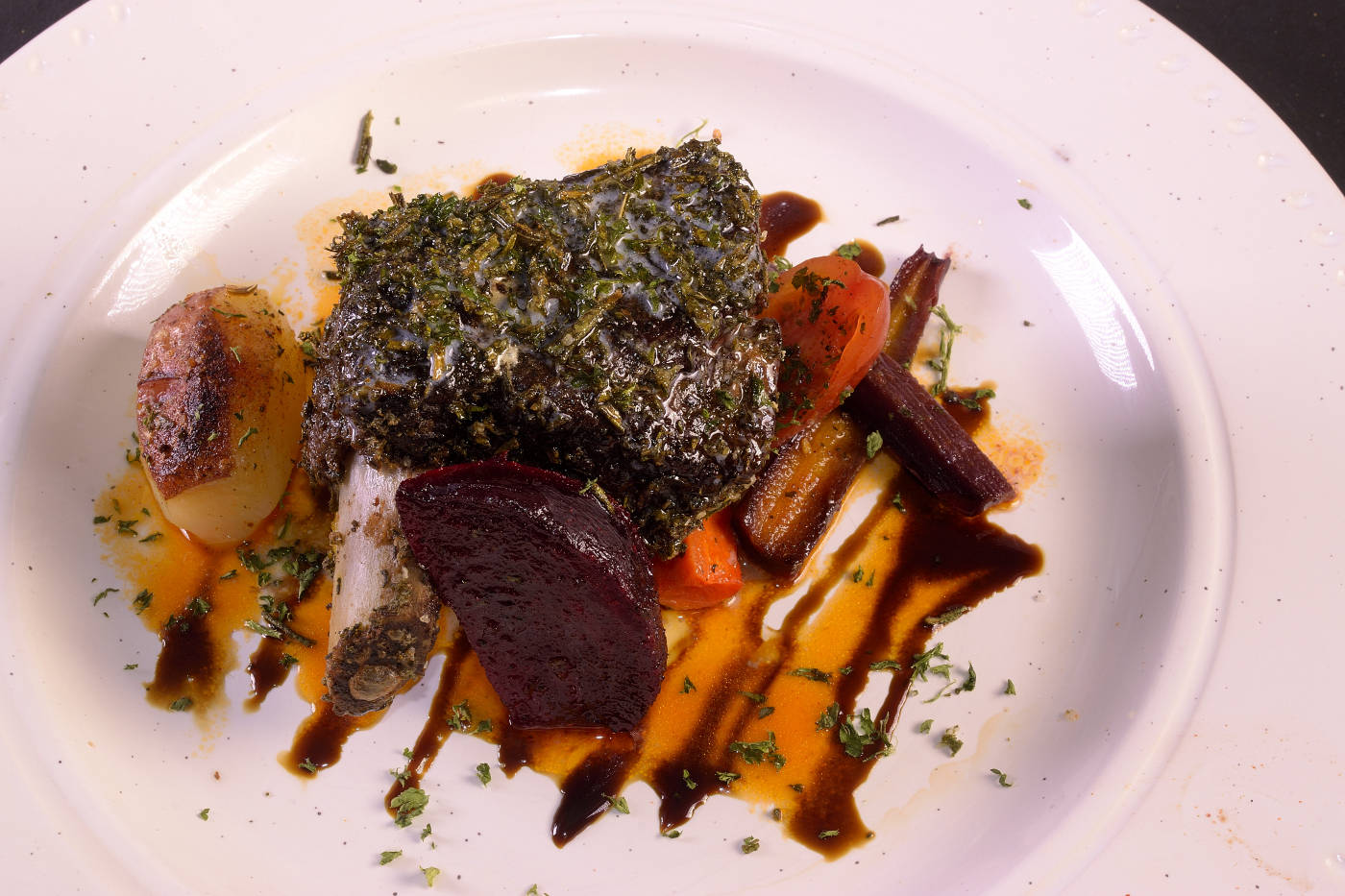 Chefs suffer–there is no doubt about that. But there is no reason to do it on purpose. Plan, think ahead, stay organized, clean as you go and have plenty of towels around. Don’t be afraid to drizzle a little butter. 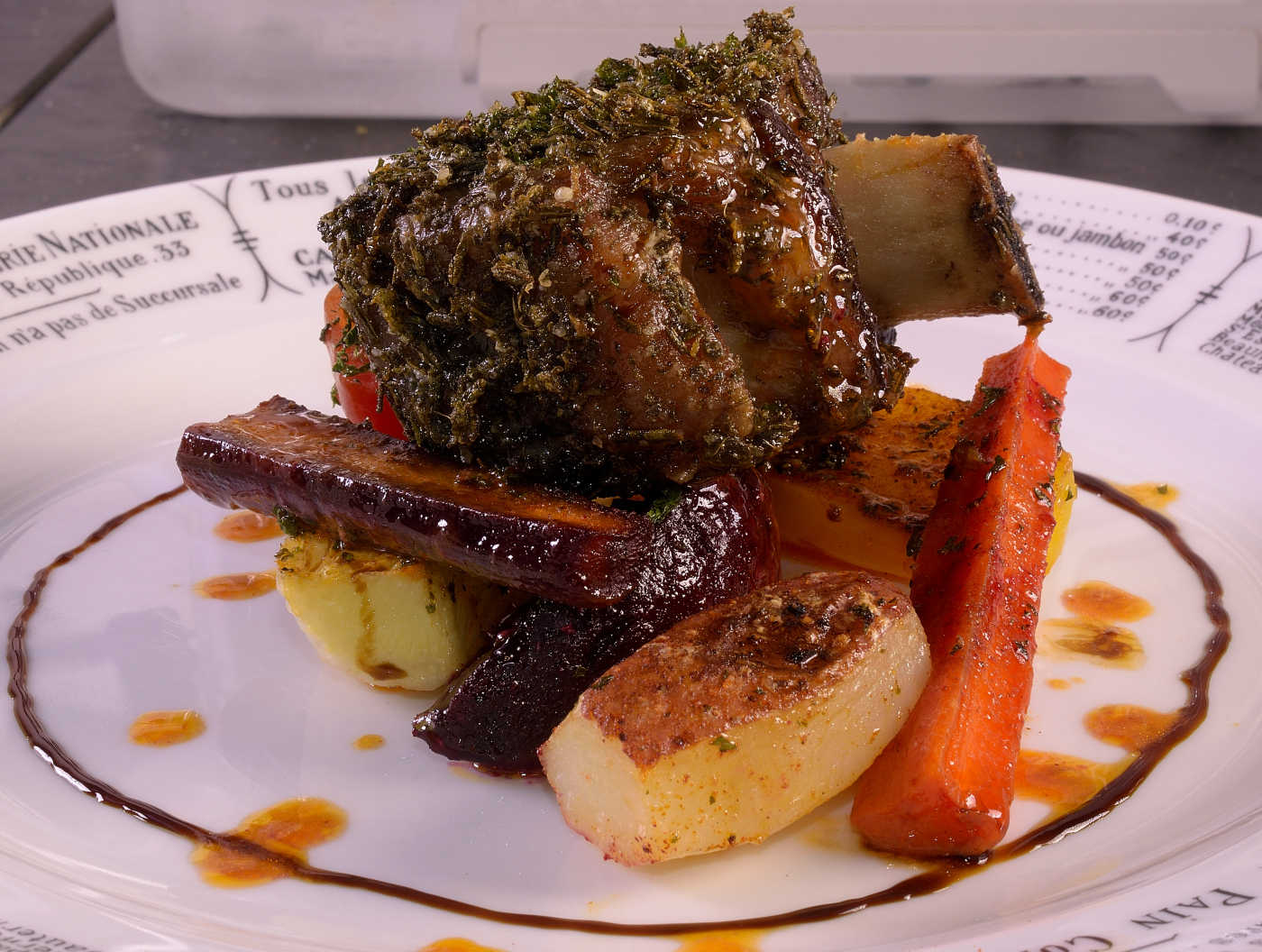 Leave space around the edge as if it was a portrait. And some altitude, like a sculpture. 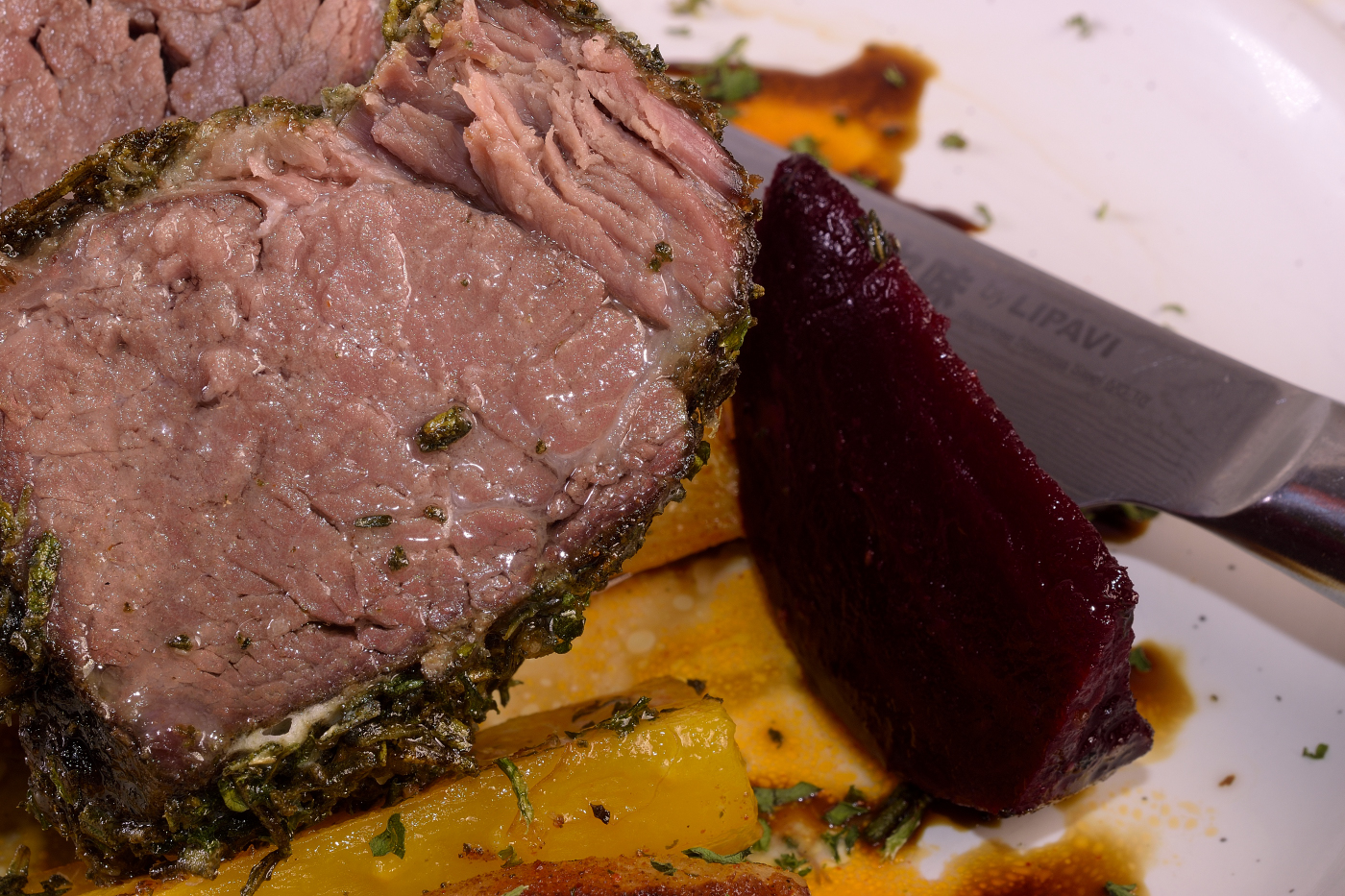 Where would we be without crispness? From French fries to raw carrots to calamari, crispness is more than just a texture. Crispness is a NOISE. It's hard to say how much crunch adds to our enjoyment of food, but celery doesn't have much going for it except snap.

Herb crusts are a recent addition to popularized foods. If you peruse ancient French and Italian cookbooks, you will be hard pressed to find dishes with an abundance of herbs OR crispness. It could be that French fries started the whole thing. This dish makes noise.