Lamb from Australia/New Zealand dominates the American retail market, but lamb from Oregon, Colorado and elsewhere is also high in quality.

Demi-glace, a few drops (optional). I make my own, but Knorr makes a pretty good powdered version for everyday use.

Demi-glace, a few drops (optional). I make my own, but there are a number of high quality packaged versions available. I usually use Knorr for convenience.

Shock in ice water until the lamb achieves 70 F/21 C–approximately one half hour. Refrigerate at 40 F/4 C until the day of use. In the current state, the lamb will keep refrigerated for at least a week. 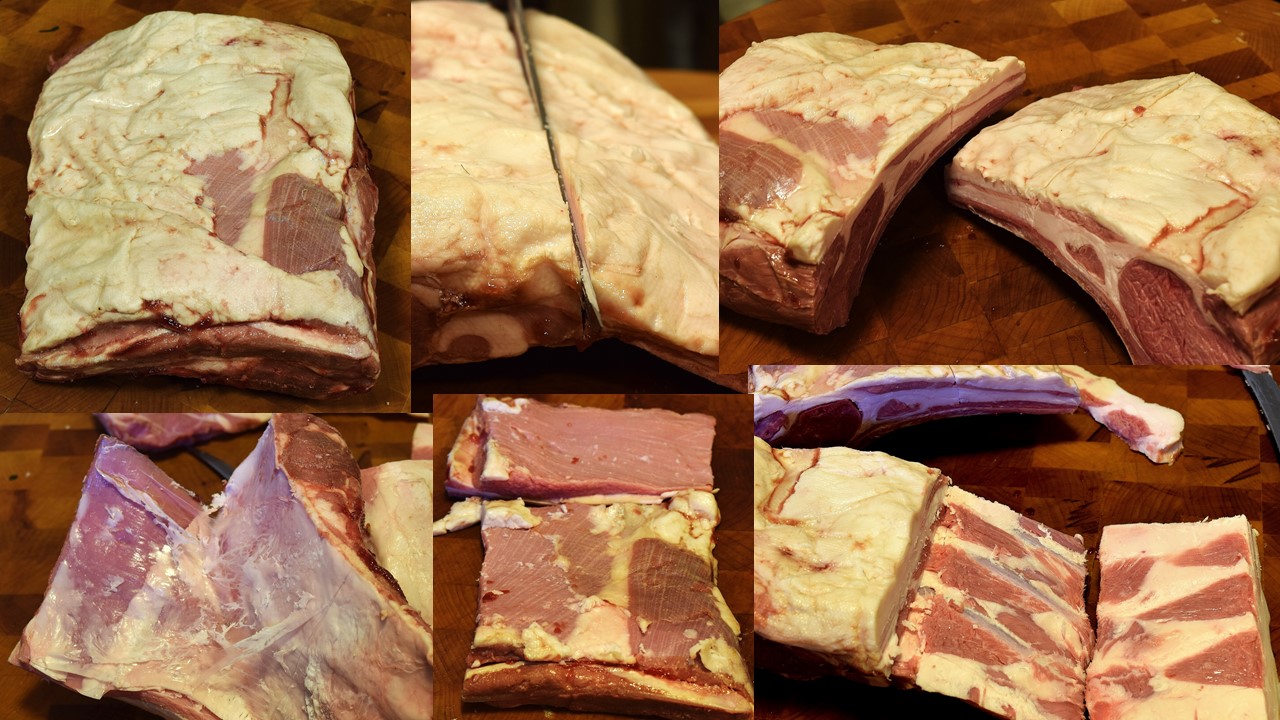 After processing and weighing, align and mark the starting cut to “French” the bones (top middle slide)–just beyond the small round identifying piece. Cut the rack in half. Remove the shoulder blade flap from the top of both pieces. If you insert your thumb between the meat and the flap (left bottom), it peels off, leaving two square pieces (middle bottom).

Use a sharp knife to scrape the fat layer off of the rib bones as shown–if it is removed in one piece, the end result will look neater…you can see how all the bones are “naked” on the top… 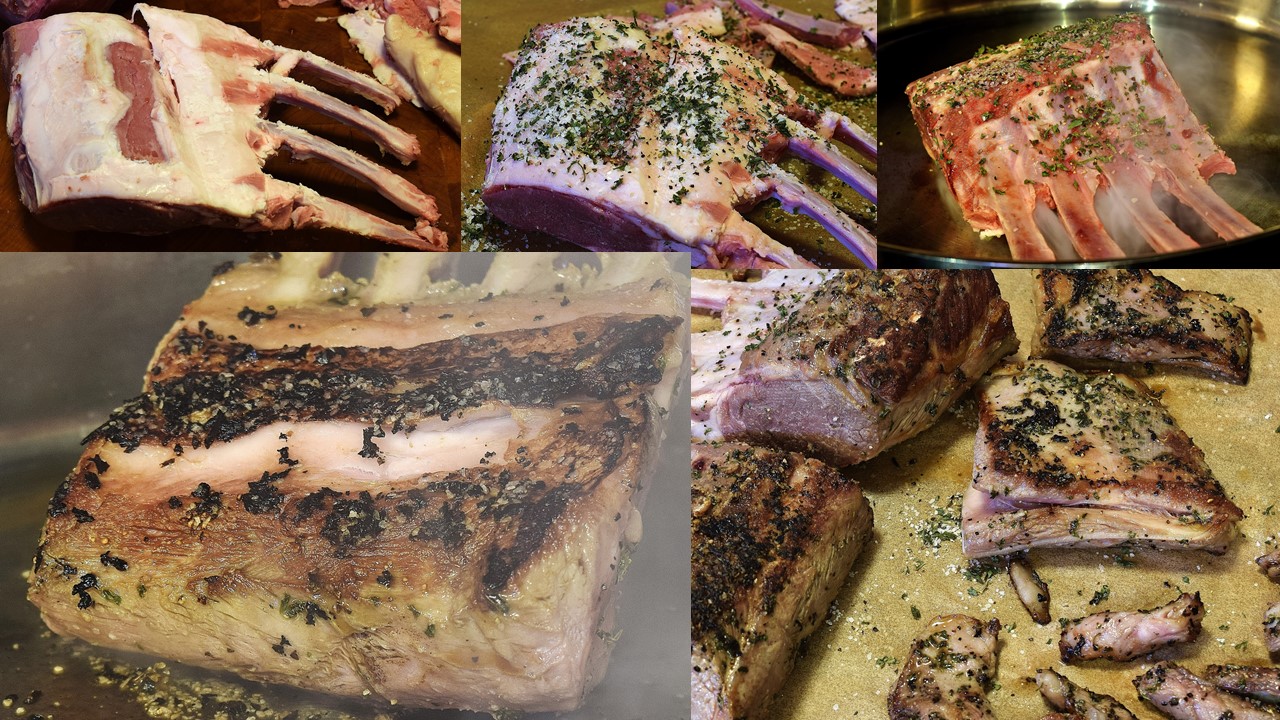 Run a sharp boning knife between the rib bones, removing the little “riblet” area in one piece if possible.

Measure out kosher salt to 1 tablespoon per pound of meat so the meat gets the correct amount. Add whatever other seasonings you like: I use ground black pepper, dried parsley and a little garlic powder; press it into the lamb

Brown the lamb on all surfaces, but do not allow it to cook–this process should only take 3-4 minutes. After browning the fatty exterior surface, stand the rack up in the pan to finish the browning–avoid exposing the bones to heat, because they burn very easily.

Brown the two flap pieces and the strips of meat that you removed from the bones and set aside. These usually become a snack for the chef, but they are great barbecued or roasted with a little mustard/bread crumb topping dotted with butter (not shown). Refrigerate the lamb at 40 F/4 C until ready to use–do not attempt to wrap the phyllo dough around warm lamb. 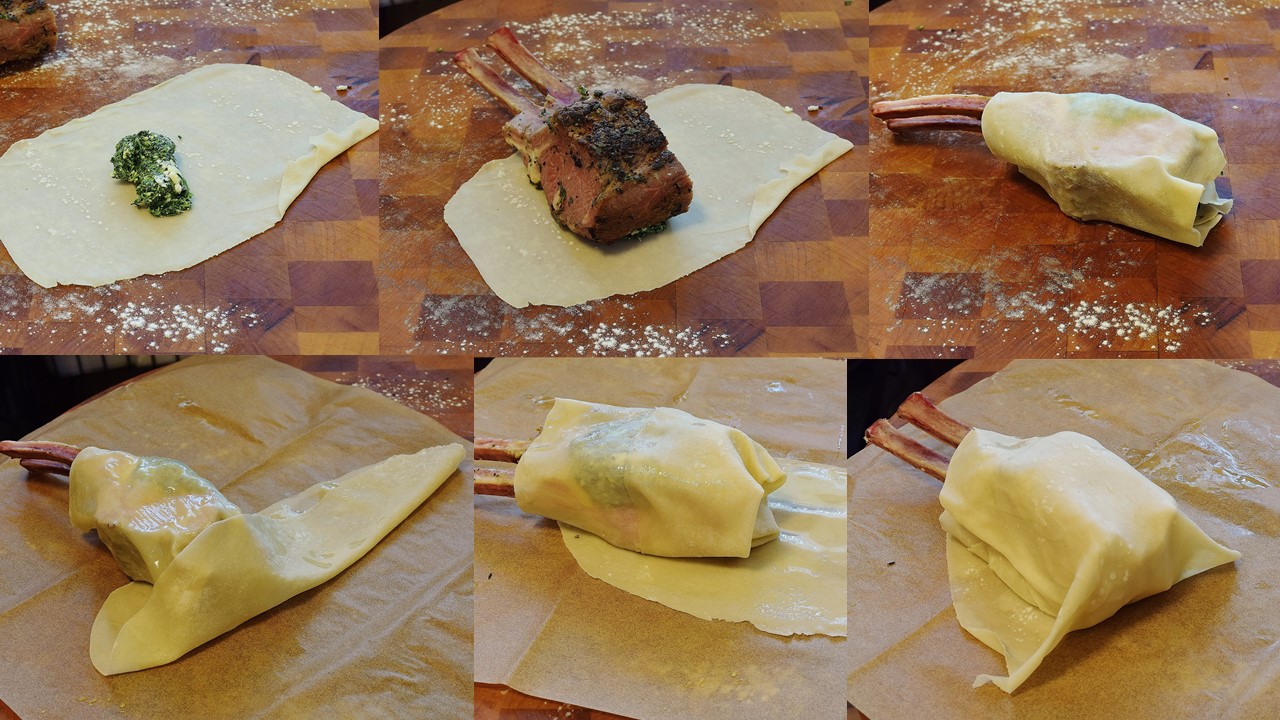 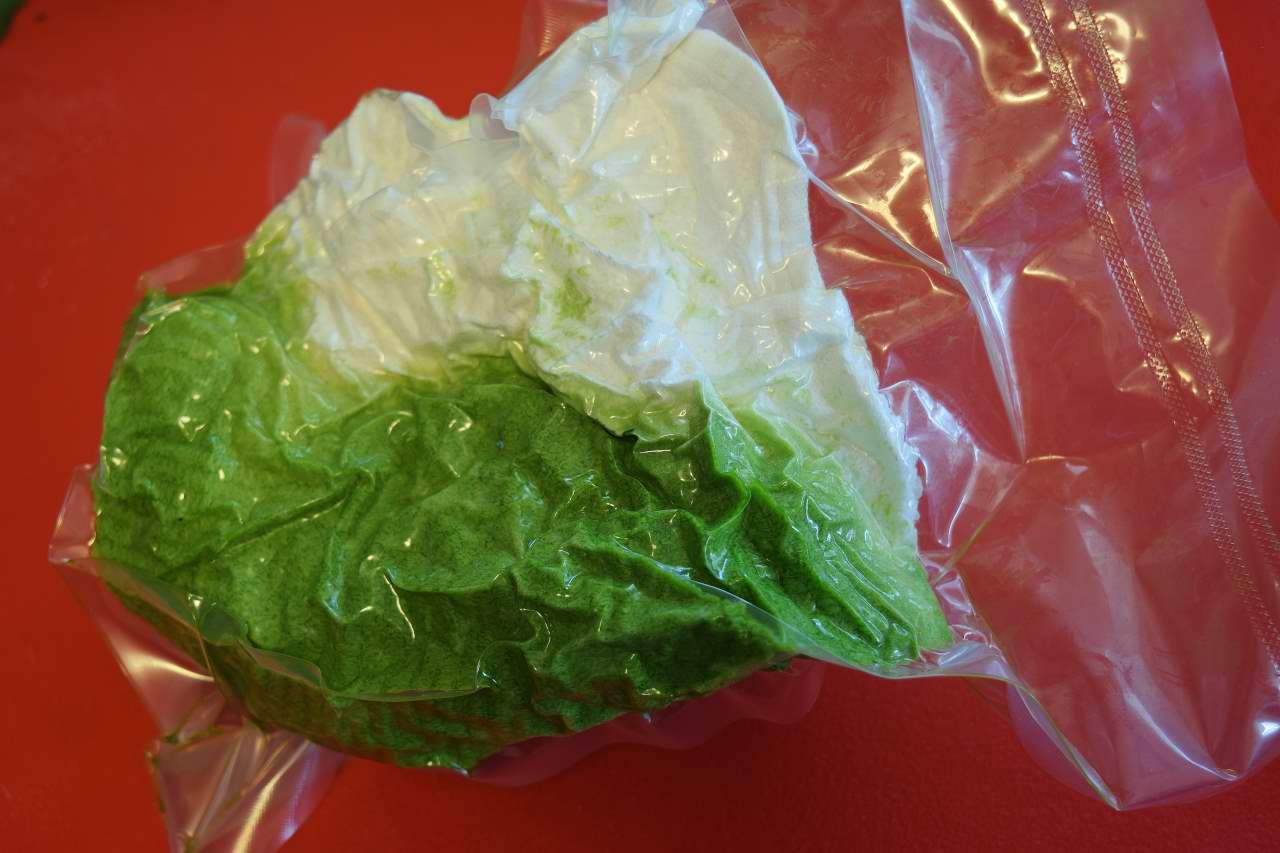 Most people steam the spinach before cooling and draining it. I prefer to spread the raw spinach out on a towel, sprinkle with a pinch of salt, wrap in the paper towel and vacuum seal in an appropriate bag. Wait at least one hour or as long as overnight. This will cause the spinach to “weep and wilt,” precluding the necessity to cook it. It also preserves its color. Remove the spinach from the bag, discard the paper towel and use another paper towel to squeeze out as much water from the spinach as possible. 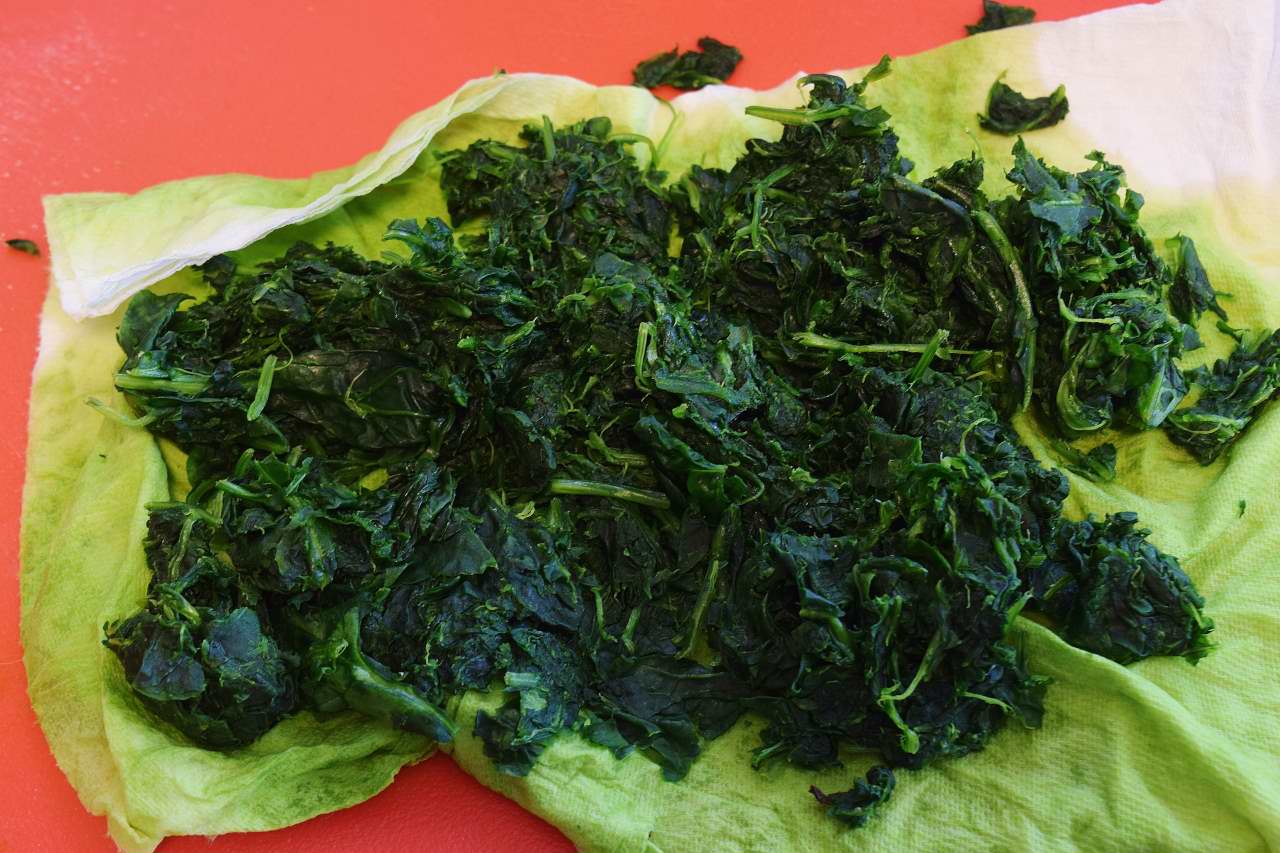 Combine the spinach with the cheese and puree in a food processor. Feta is a little salty, so I do not add any additional seasoning. Refrigerate the filling at 40 F/ 4C.

Phyllo dough is available in the frozen food section of some markets, but it is almost as difficult to handle as it is to make it yourself. I have a modernized version using a pasta roller that works very well.

Combine the flour, salt, vinegar, lemon juice, olive oil in a food processor or Kitchenaid type mixer with the paddle. Mix these ingredients while you bring the 2 oz water to a boil. Add the water to the mixer or processor but do not expect the dough to form a ball. After one minute, turn off the device and turn out the mixture. Form it into a ball with your hands, cover in plastic, and allow to rest in the refrigerator. 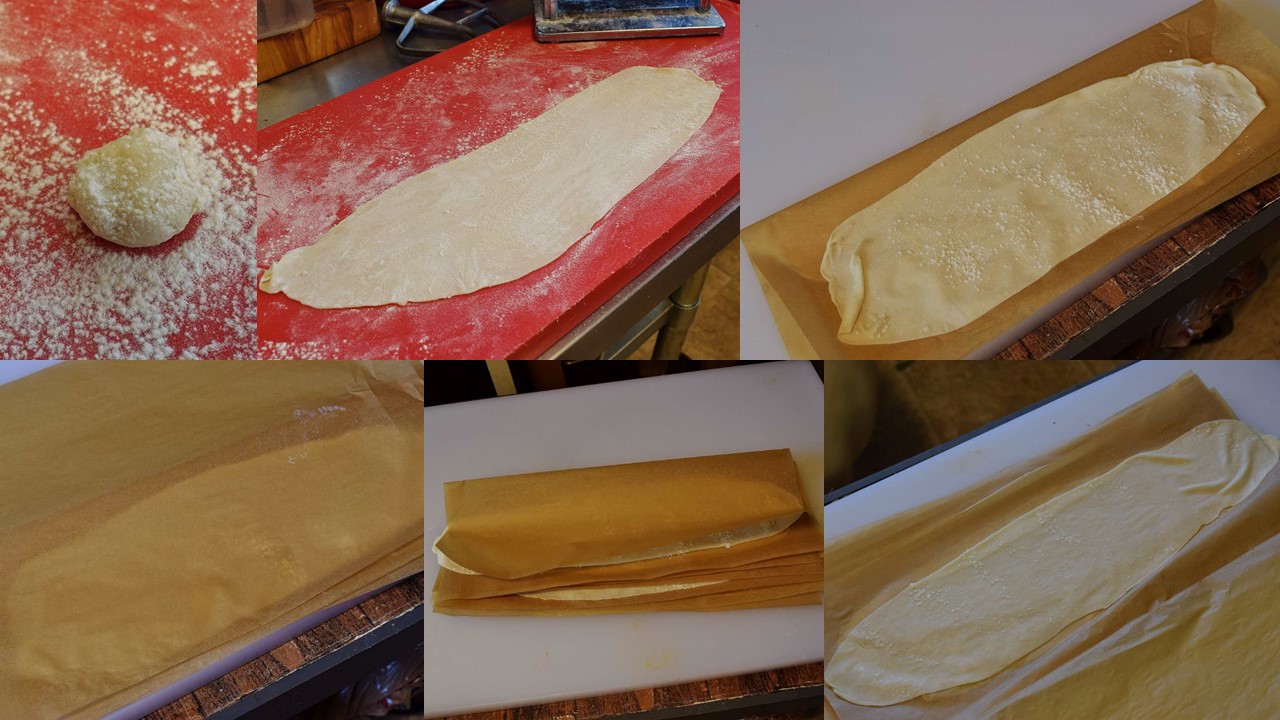 Roll out the phyllo.

Divide the dough into 8 equal portions–approximately 1 oz/28 g each. Use the pasta roller to form the dough into sheets: run a slightly flattened piece through the widest setting, rotate the dough 90 degrees, go to the next setting and run the dough through. Continue refining the setting and rotating the dough–this will eventually make the dough thinner, longer, and wider. Dust again with flour after running through “5”, and continue running through “9.” Dust with flour as needed. As you finish each strip, dust lightly and lay it on parchment or butcher paper and cover with the paper as well.

Cut the eggplant lengthwise into quarters. Score the flesh but leave the skin intact. Heat a large, flat bottomed skilled to
225 F/110 C 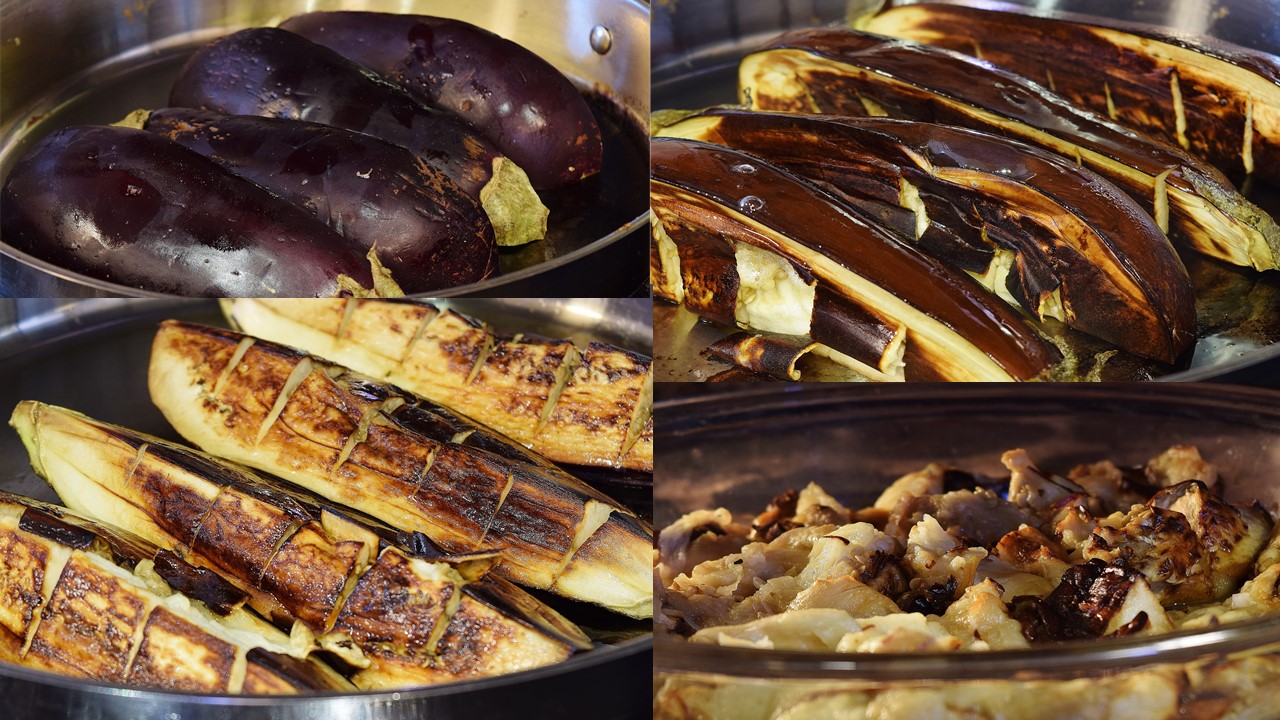 Drizzle a few drops of olive oil in the pan and spread it around with a paper towel. Toast/brown the eggplants on each flesh side for approximately five minutes. Turn the skin side down and turn off the heat. Wait five minutes for the eggplant to finish cooking and to cool somewhat. Remove the eggplant from the pan and add the garlic and the rest of the EVOO. Simmer until softened, but do not brown. Put the garlic in a bowl or other mixing container. Scrape the eggplant from the skin and spread out in a pie pan, etc. Use the oven’s broiler function to continue browning and drying the eggplant–this is an effort to moderate the watery texture of eggplant that some people find unpleasant. Allow five minutes.

Wrap the eggplant in a clean towel, seal and vacuum. Again, this removes excess water. Unwrap, chop coarsely, and add to the container with the garlic. Chop the onions, tomatoes, and olives coarsely. Add to the mixture along with the capers, sugar, balsamic vinegar and a small pinch of salt. Refrigerate.

Take one of the racks and cut it in half, so it features two bones. Set aside.

Take one sheet of the dough and lay it on a floured board. Place  half of the filling in the middle of the strip of dough and fold both ends around the rack. It should be snug, but it is not intended to be air tight, as I will explain. Paint with the melted butter, and wrap the lamb in another sheet of dough in such a way that the end is covered this time.

Paint another sheet, and roll the lamb up in it lengthwise as shown in the bottom right slide above. We are covering all the bases! How many sheets you use depends on your preference, but I recommend using at least three sheets. For this demonstration we used six, because I was rolling in dough!

Continue buttering the sheets and rolling the rack in different positions as shown–use your best judgment as to which faces are more/less secure, but as I mentioned, do not worry about leaks. This is a common misconception–when the cold package is exposed to intense heat, the meat starts to emit steam, which prevents oil from accumulating on the surface. If the seal is air tight the package will inflate and burst. When completed, paint the outer surface with butter. This prevents the dough from cracking while it rests in the refrigerator at 40 F/4 C.

Heat approximately 1 quart/1 liter of oil or deep fry shortening in a high sided pot–the oil should be no deeper than half the height of the pot to avoid boiling over. Shortening is typically more durable for this purpose than salad oil. If you strain it conscientiously after use, it will be reusable–it should also be refrigerated–this retards rancidity. Monitor the oil’s temperature until it achieves:
325 F/165 C.

When the oil is hot, poke a few holes in the dough with a fork or skewer and carefully lower into the oil with a slotted spoon–do not drop it in, or you may get the “cannonball” effect. 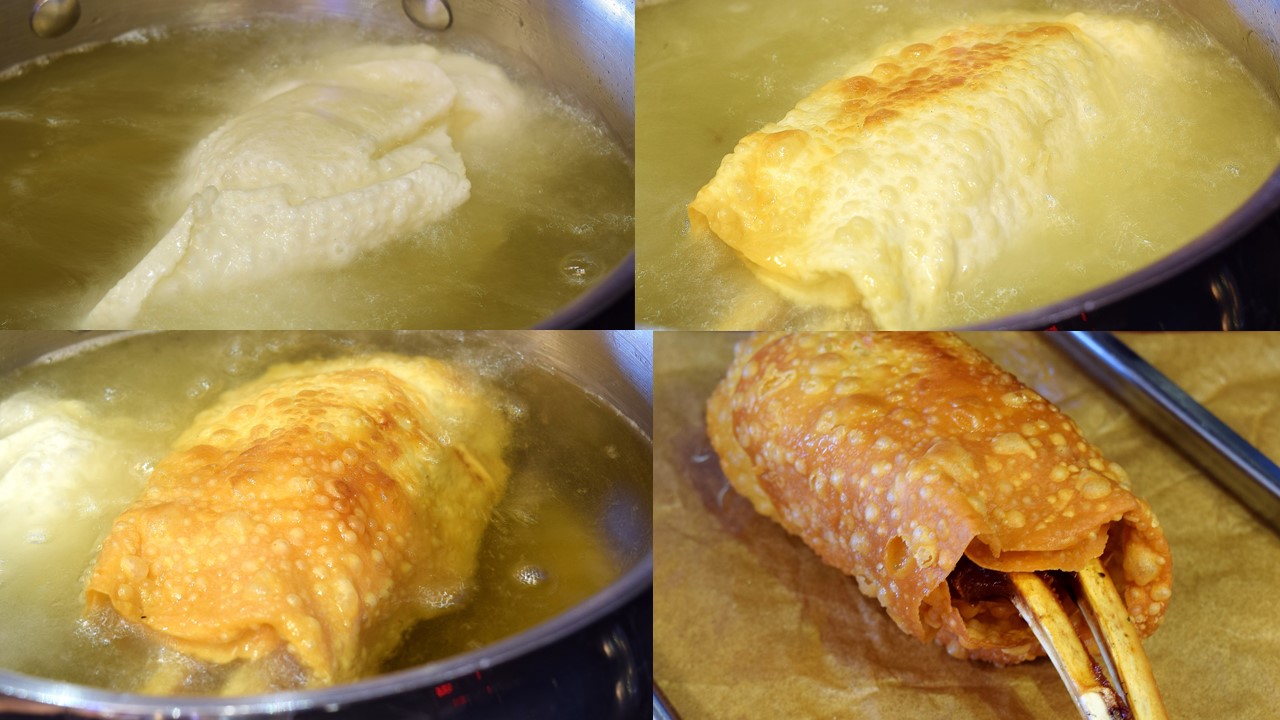 The package will sink at first, so just watch it and gently turn it over when it starts to brown on the bottom. Continue frying until the package is golden brown. Even though it is evenly browned, the lamb itself will still be cold–no higher than 70F/21C. Put the package in the oven and monitor with a probe thermometer until the center of the lamb achieves
130 F/54 C.

If you prefer your lamb well done, leave it in the oven until the internal temperature achieves 155 F/65 C.  You can also use a propane torch to remove the red color after you cut it. When you remove the lamb from the oven, let it sit while you arrange your plates. It is too hot to carve right now–it needs a few minutes on the counter.

Arrange some of the relish on the center of the plate, and drizzle with the brown sauce. Because of the bulk of the stuffing and the dough, this amount is really enough to serve two. I show presentations using both one and two ribs per plate below. or this, for the big appetite. It’s really a lot! Age restrictions in New Zealand and Australia dictate that lamb must be less than one year old to be labeled as such. This limitation does not exist in the United States, but that does not mean we are selling mutton as lamb. Differences in breeding and especially feeding affect the ultimate outcome of the end product more than age, within limits.

In fact, lamb raised in the United States is typically milder in flavor than lamb from elsewhere. Foreign lamb is grass fed only, while American lamb is frequently "finished" with grain to achieve the larger size and a certain amount of marbling. This recipe can be applied to any type of lamb, with minor adjustments.