Many pitmasters proceed directly from the raw product to the pulled pork result. Sous vide spotlights stops along the way.

Click HERE for how to make the sous vide, hot smoked roast. After cooling, trim the roast to form a uniform block. Slice center cut portions–4-8 oz/120-240 g. Use excess for pulled pork. 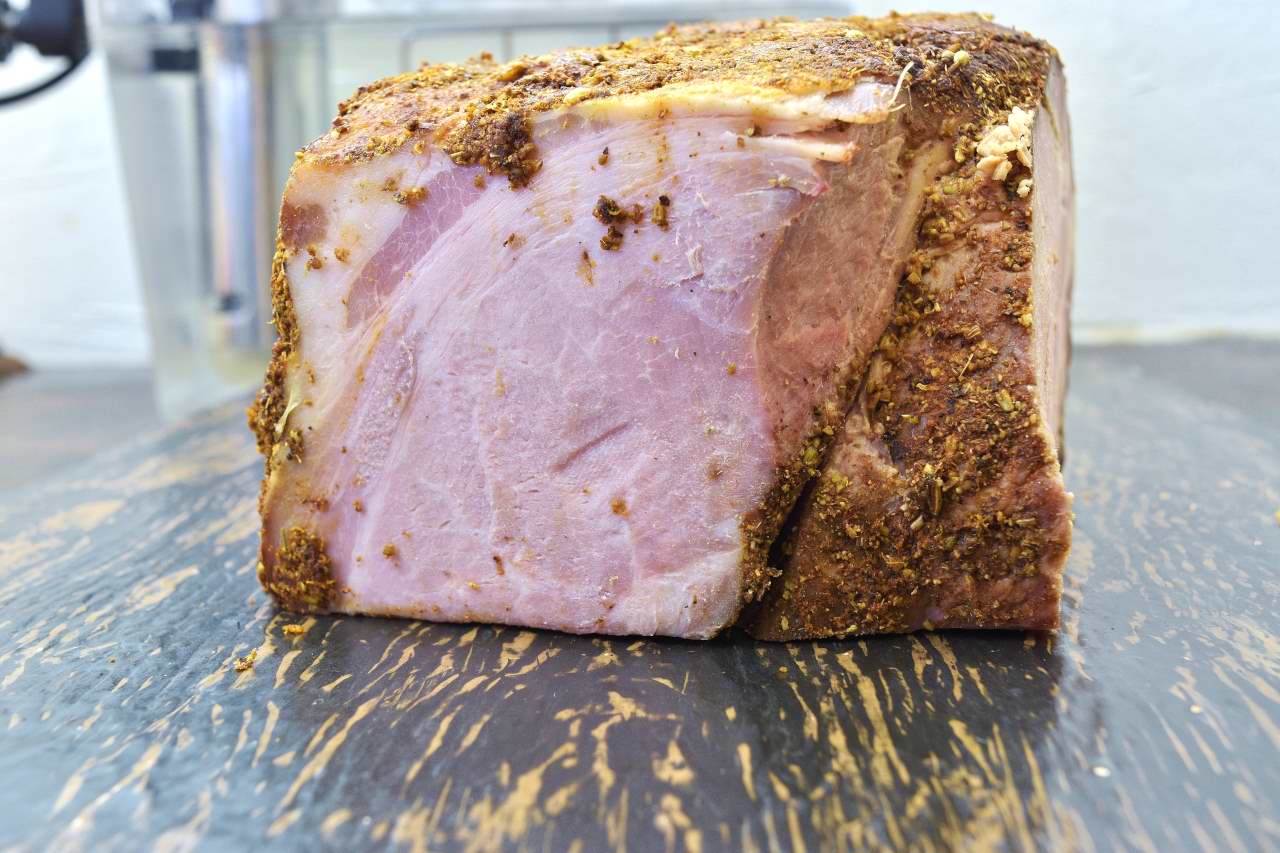 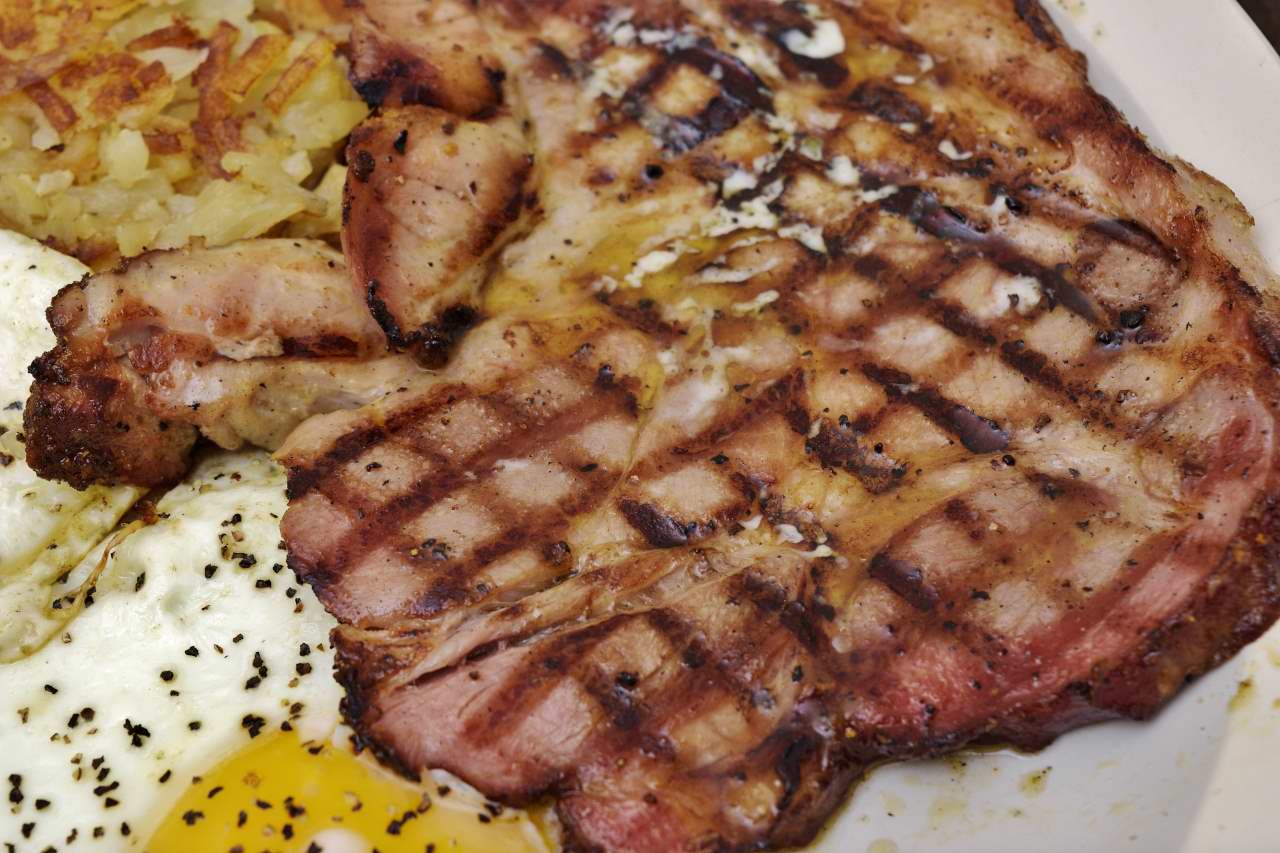 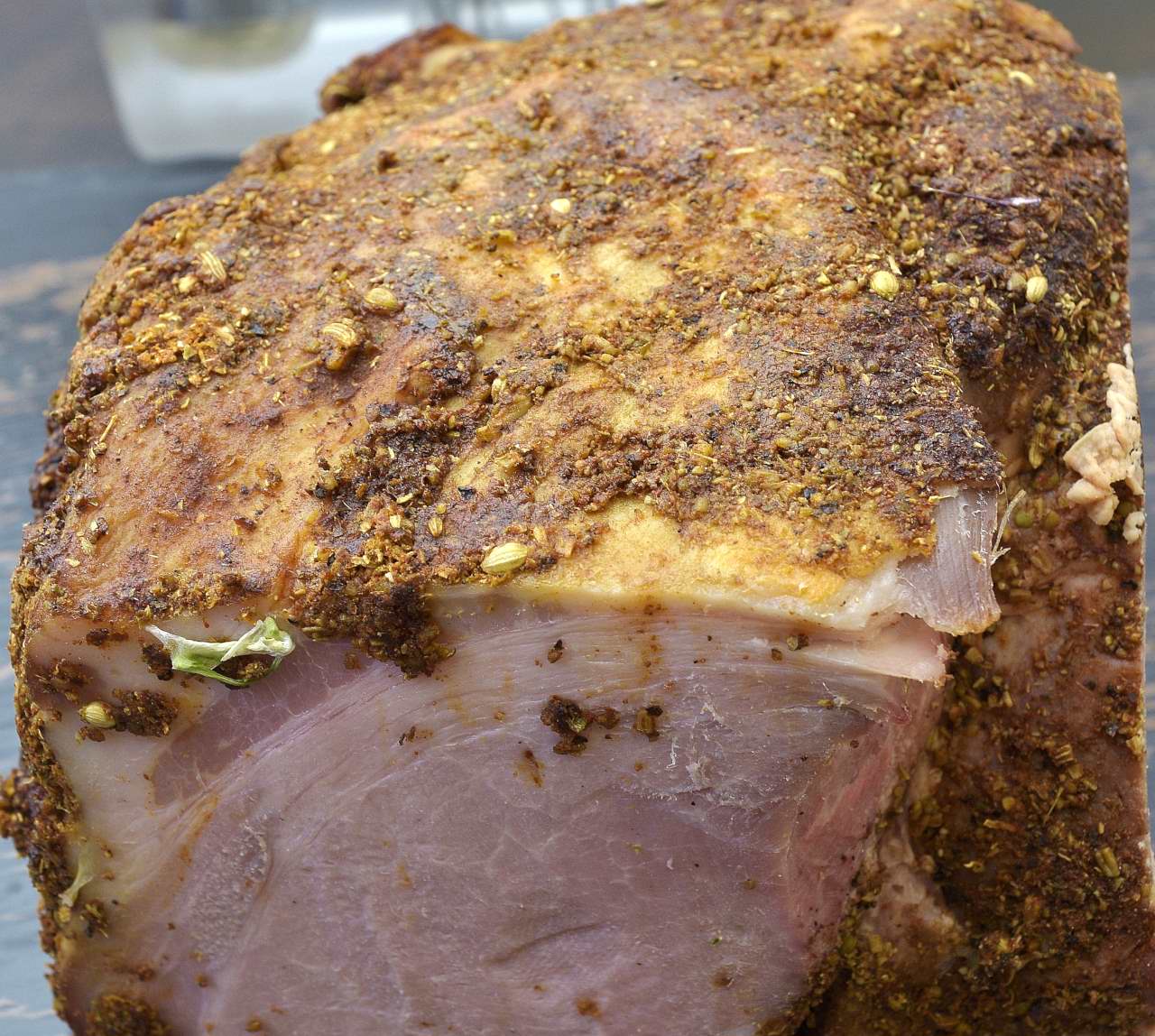 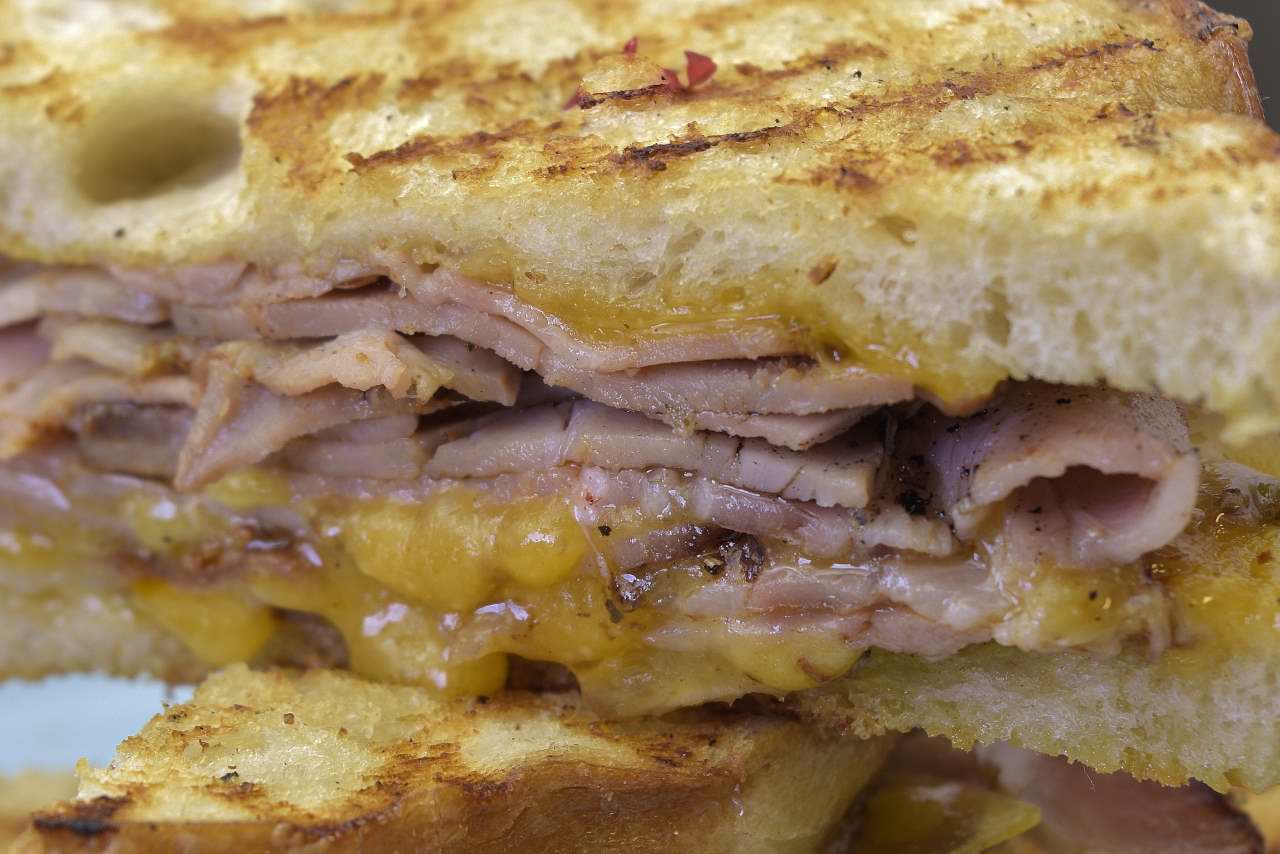 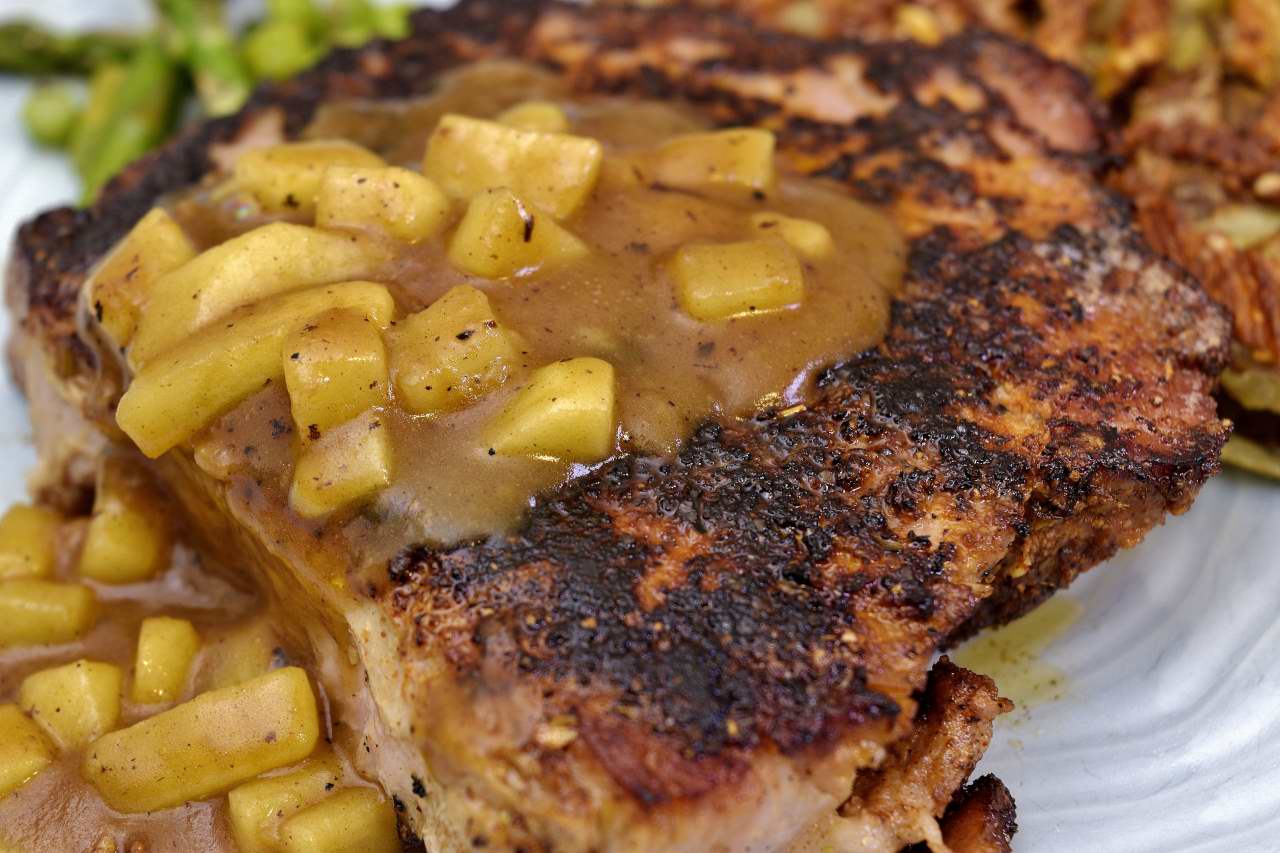 Flour from the shaker or sifter–a few grams.
Egg whites, 1 each. 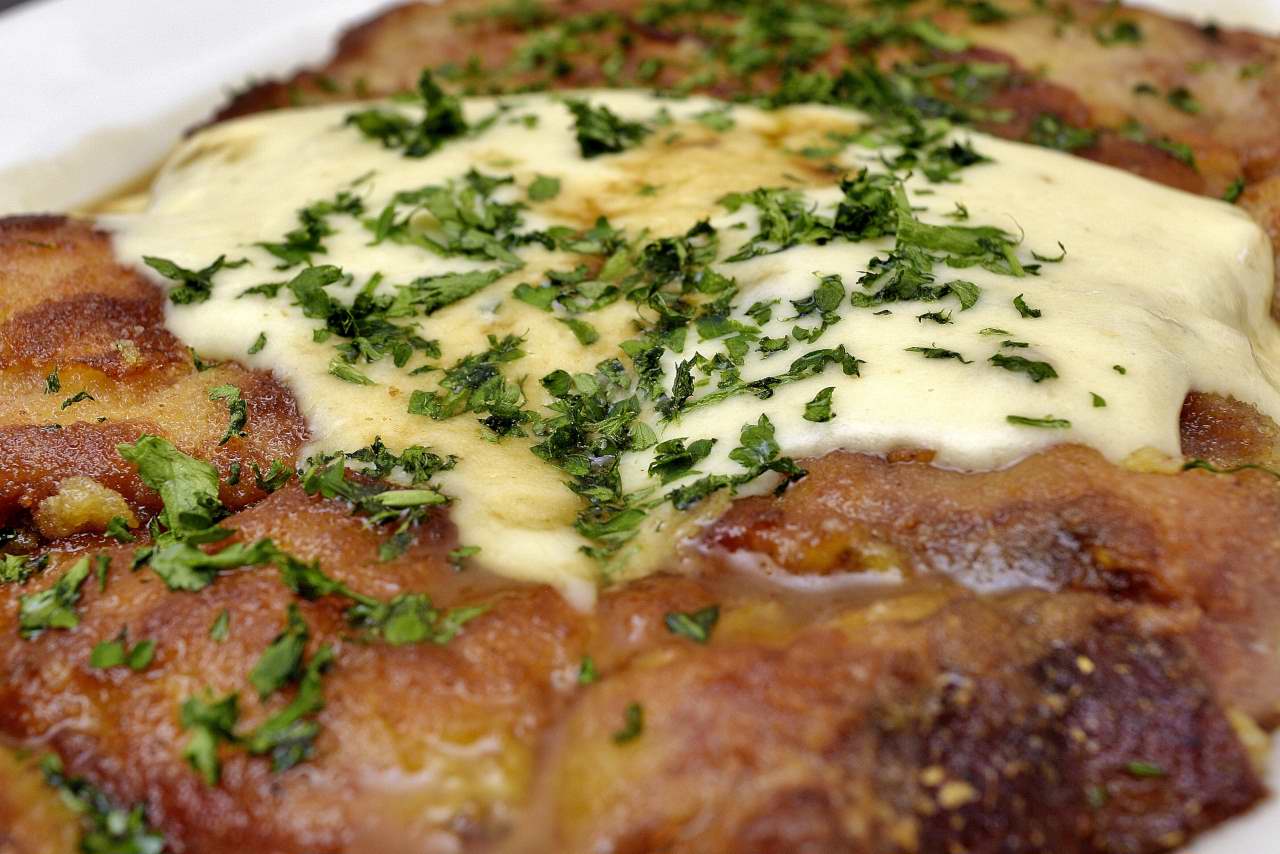 Click HERE to find out how to sous vide process and hot smoke the pork shoulder butt. 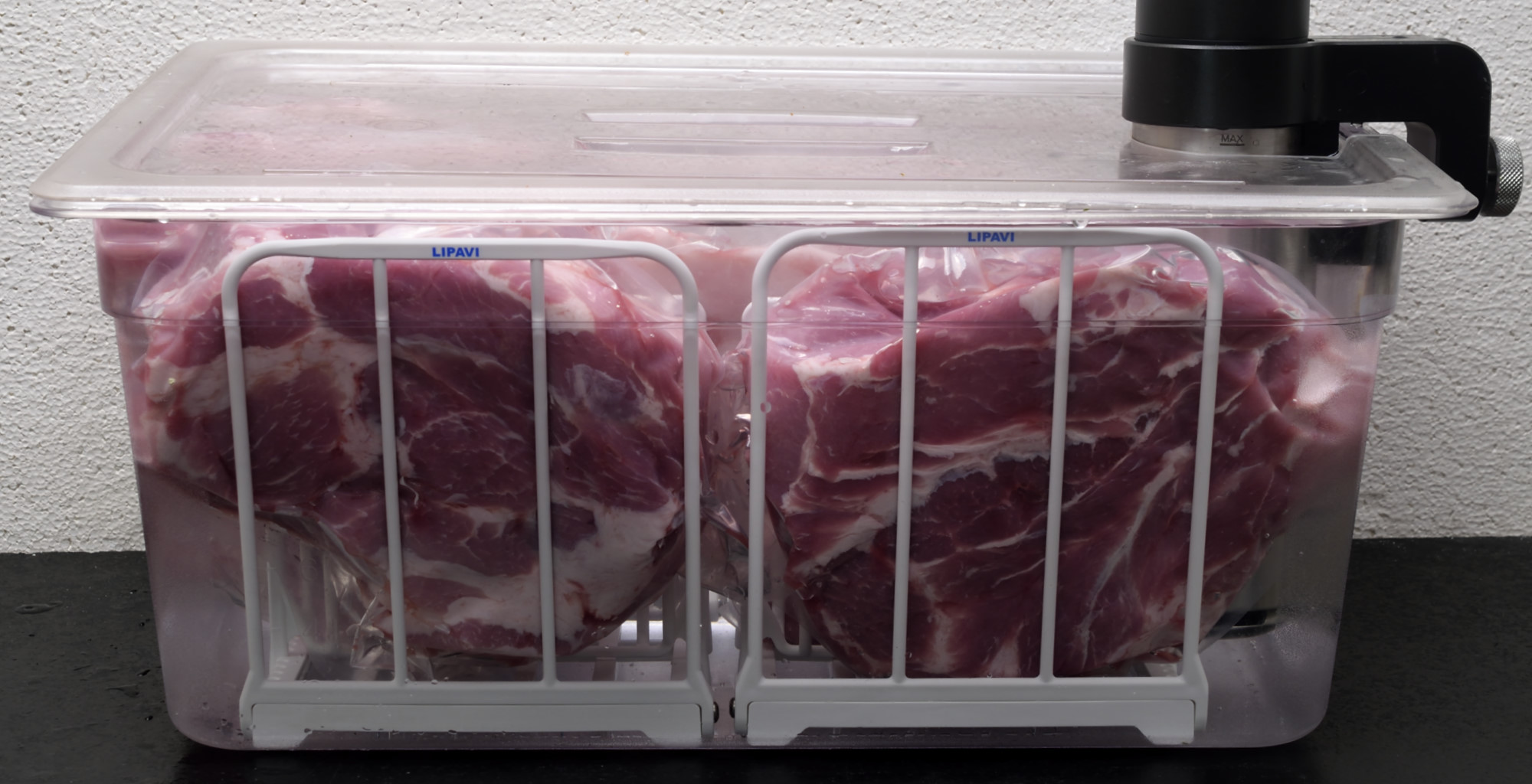 We have a sort of colloquialism that we use to refer to the synergy of sous vide and hot smoking–we call it Sous-B-Q. It is not as widely recognized as “Coke” or “Caesars Palace,” but we consider it a sort of signature, our own little trademark. 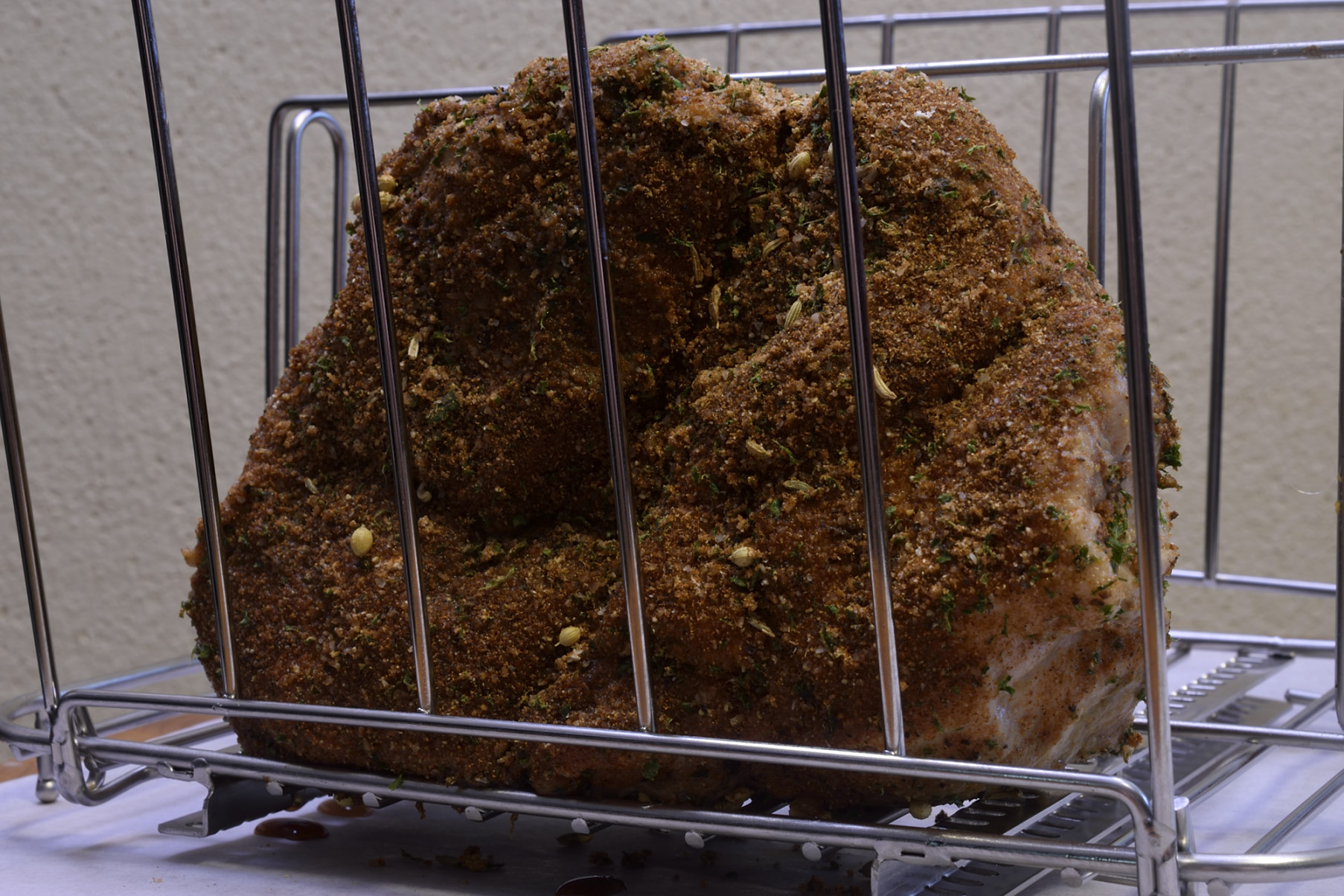 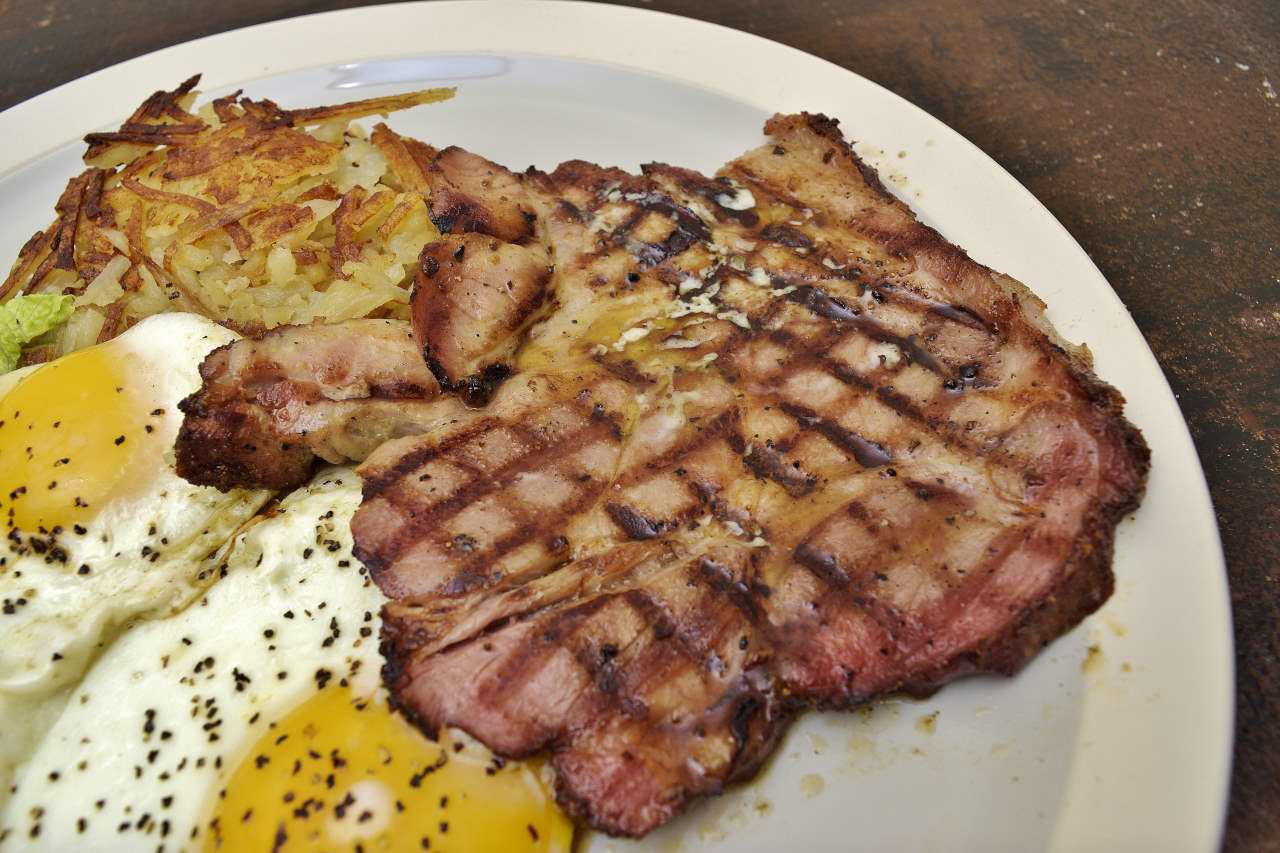 For this application, we pan broil the steak in well preheated 350 F/176 C cast iron–who fires up the barbecue outside for breakfast unless they are camping? No extra seasonings. I like my eggs sunny side up, just because. Scrambled is fine–whatever you like! 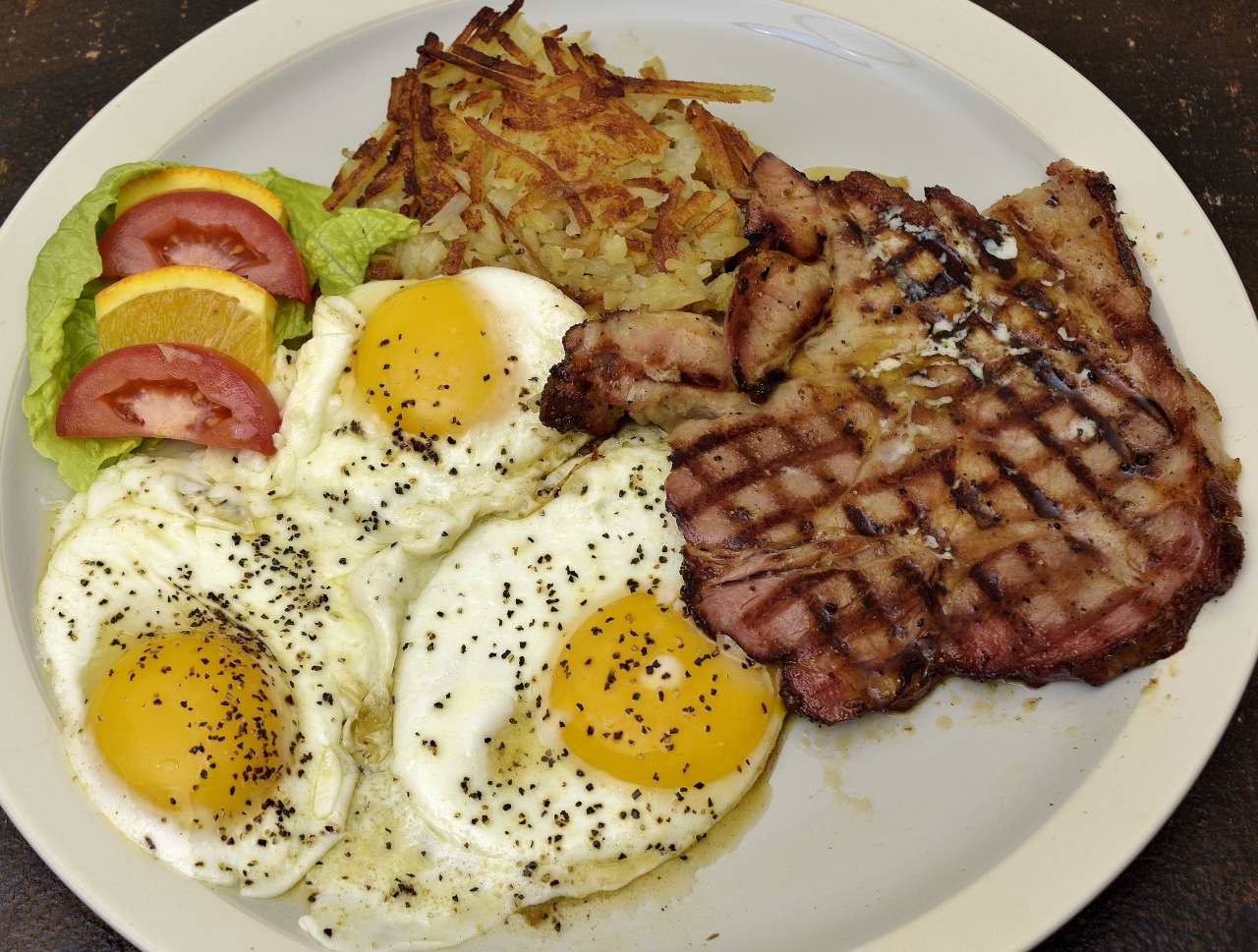 Who eats the garnish? That’s a good question. Restaurants put it on there for color and to create the illusion of personal attention to each order. Remember crab apples? Yikes. I eat the fruit, but not until I’m done finishing everything else. I’m here for the proteins and the crisp potatoes.

There isn’t much to a grilled ham and cheese, right? Cooks don’t lose sleep over it, but we do spend time contemplating how to make things better, or easier, but mostly faster. The first thing a cook figures out about a grilled ham and cheese is that you should start it open faced so both pieces of bread can toast at the same time. Then, the cheese should sit against the bread, if only to glue the sandwich together. Plus, it will melt faster that way too. 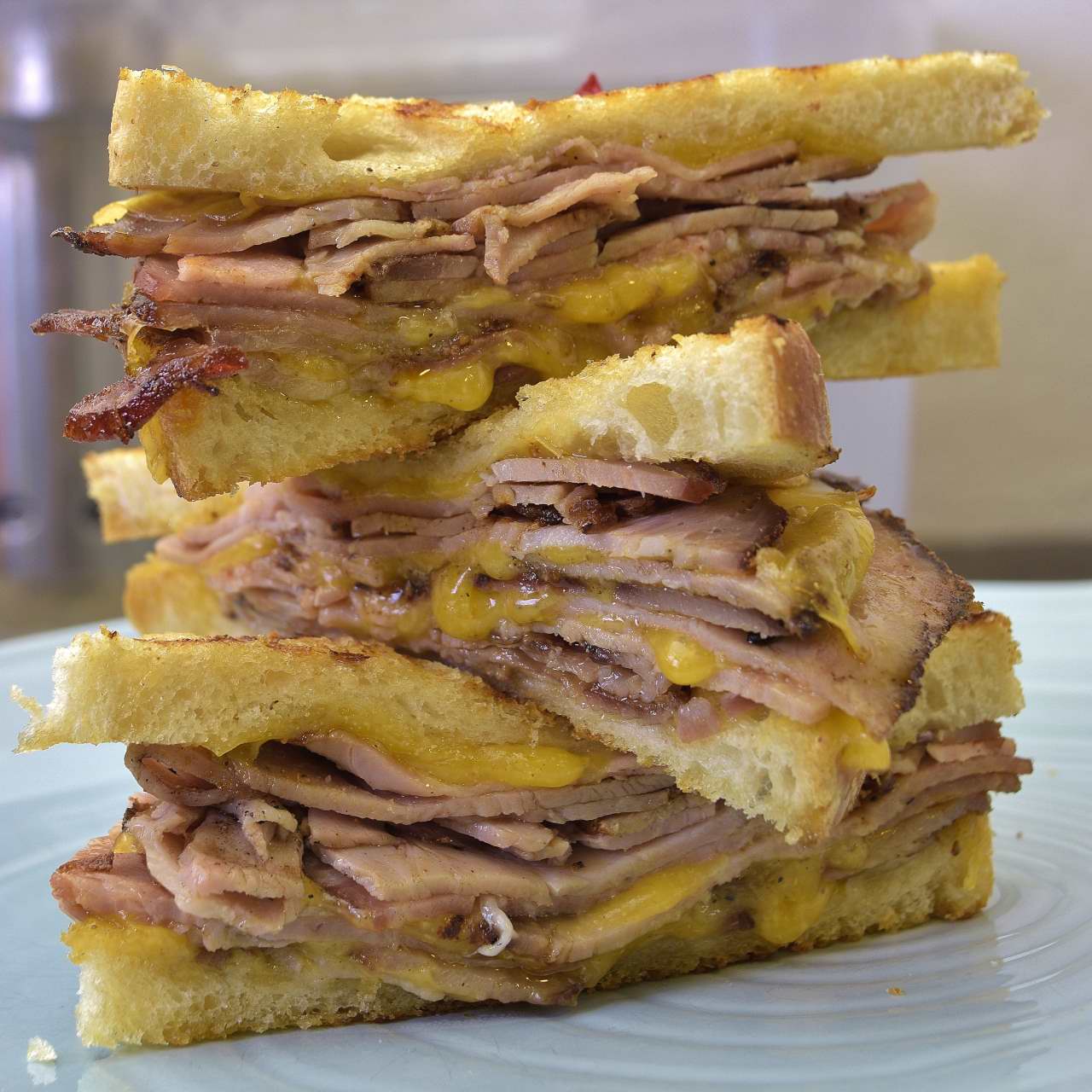 Then we figure out that it’s best to heat the ham on the griddle away from the sandwich. Who wants to wait for the heat of the griddle to penetrate the bread, the cheese, and then hopefully the ham?. If we really have time to sit around and think about it, we layer ham and cheese five or six times so people can wonder how we did that… 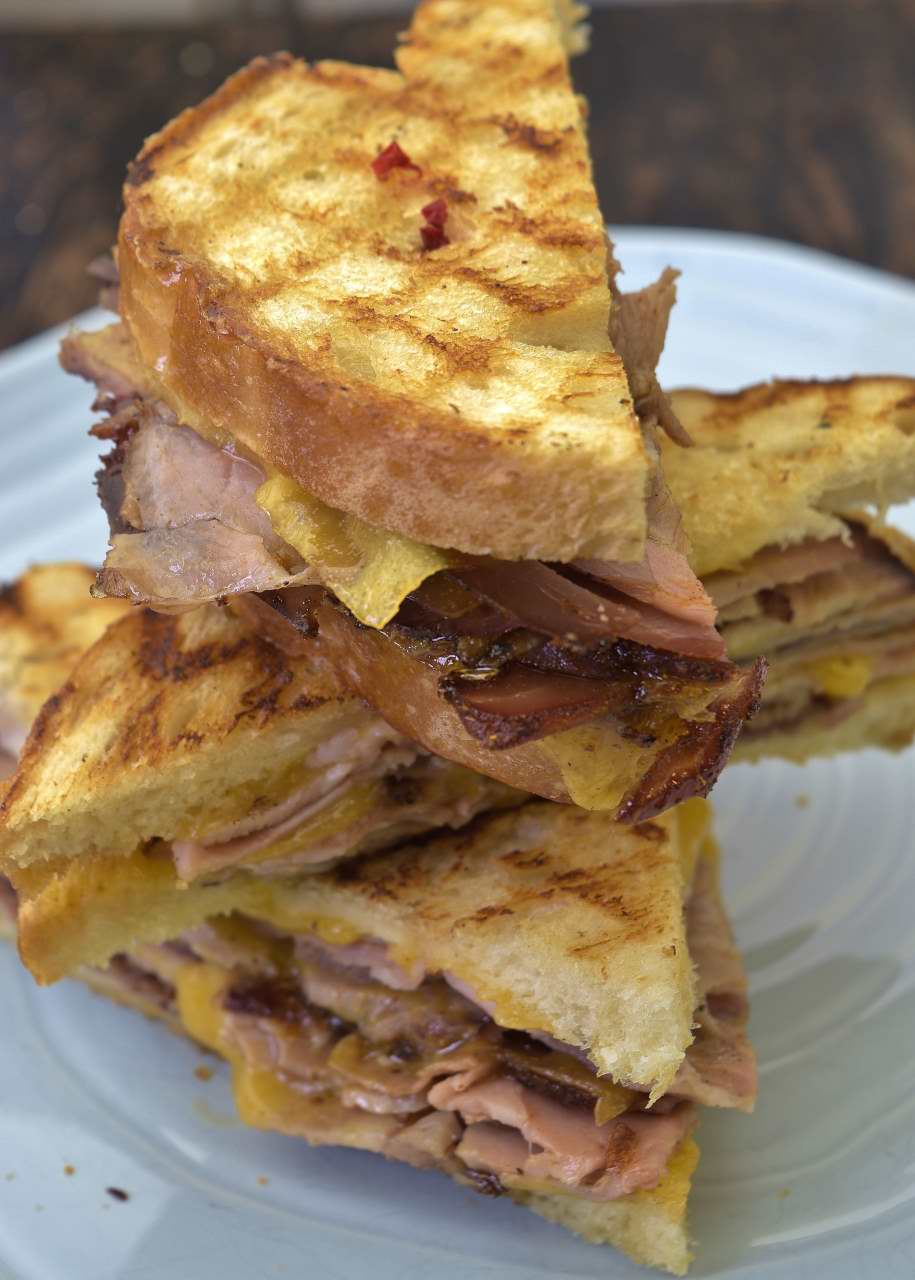 If we have to take pictures, we figure out how to stack the sandwich up without it falling over–the old hidden pick trick, you can see the little red dot up on top. 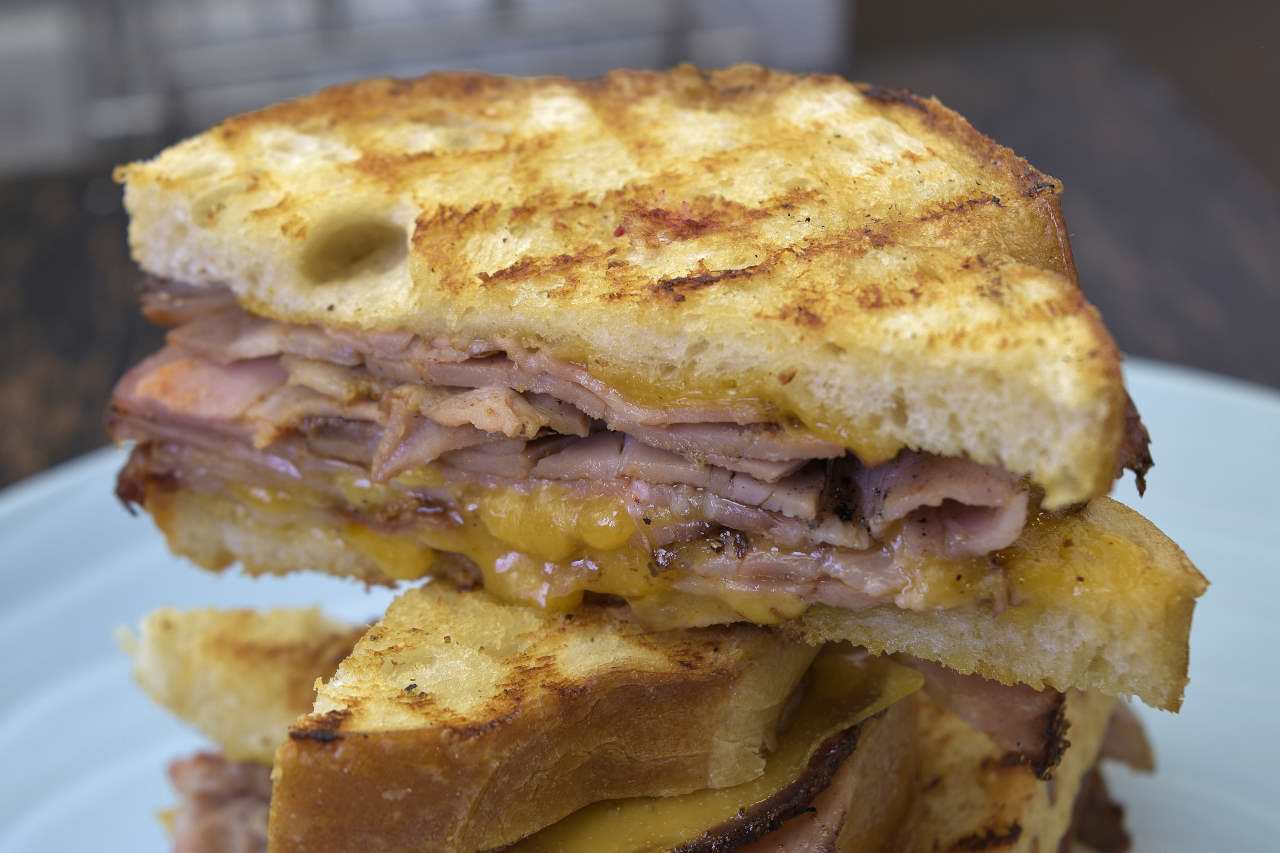 Fortunately, there’s software to rub out that dot. You don’t want somebody to bite into that stick, that’s for sure. That’s why the food at your table never looks like the pictures of the food on the plastic menu or the website.

What would the world be without sandwiches? 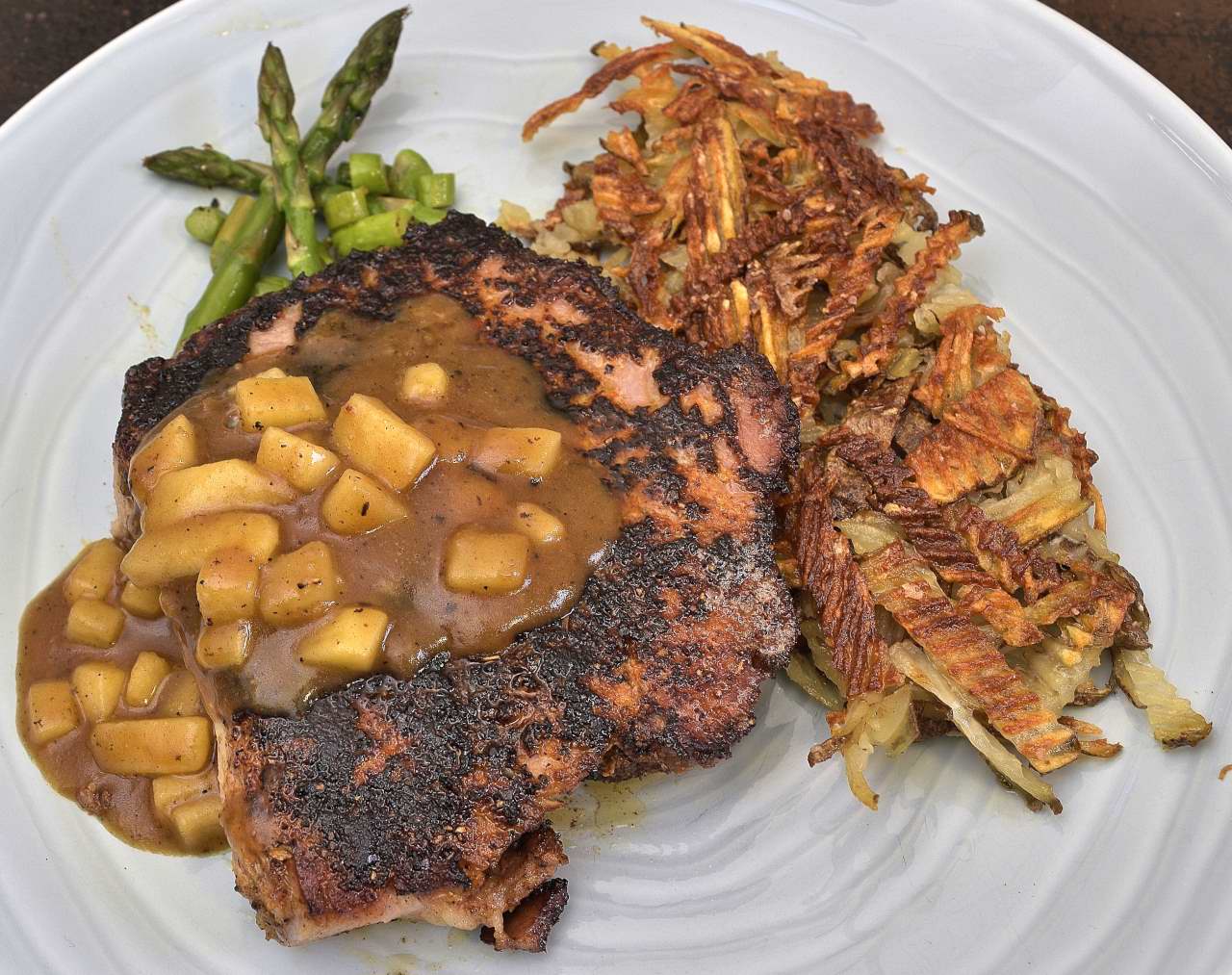 Galette potatoes take a while. You don’t have to make fancy potatoes for this dish to be good. Dusted the steak with flour, moisten with egg whites and then dip in the black spice. Let it rest for a few minutes so the spices cling.

Heat the pan to 250 F/121 C (medium high), sear the asparagus with salt and pepper and a few drops of oil, toss with butter, set aside.

Wipe out the pan with a dry towel and return to the burner. Sear the steak at 250 F/121 C (medium high) with enough oil to prevent the crust from cracking off.

Stage the steak to the plate, add the apples to the pan, toss, add the espagnole and the maple syrup. Bring to a simmer–do not overcook the apples–dissolve the butter in the sauce, and that’s all there is to it. 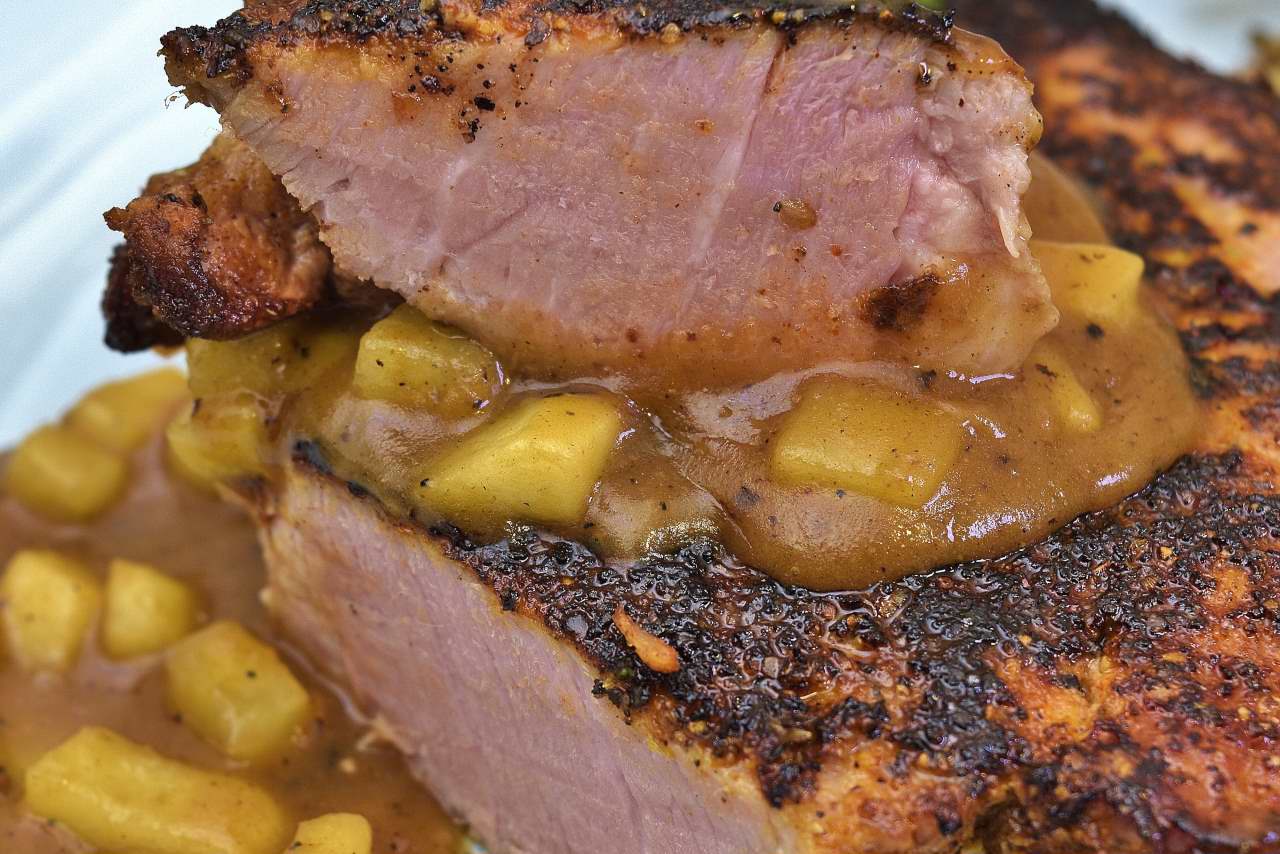 That pork is not rare any more than cured ham is rare. The pink color is a result of a chemical reaction between carbon monoxide, nitric oxide and the meat during the course of hot smoking–these gasses are not present in a regular oven. If you lift the lid of your smoker too often during the first two hours, this coloration may not occur–another reason not to peek. My wife still thinks it’s ham.

The combination of flavors sparks the imagination–the sweetness of the apples and maple syrup–the body of the espagnole, the spice of the spice, the crisp of the potatoes. I could go on and on. I think I may already have!

Click HERE to see a complete explanation of the texturing and breading procedure.

Heat the skillet to 250 F/121 C, add the vegetable oil and the cutlet. Fry until brown and then carefully turn over. Brown on the second side. Since the steak is already cooked, we are only interested in the color. Remove from skillet and stage onto the plate. Reduce heat on the skillet to low. 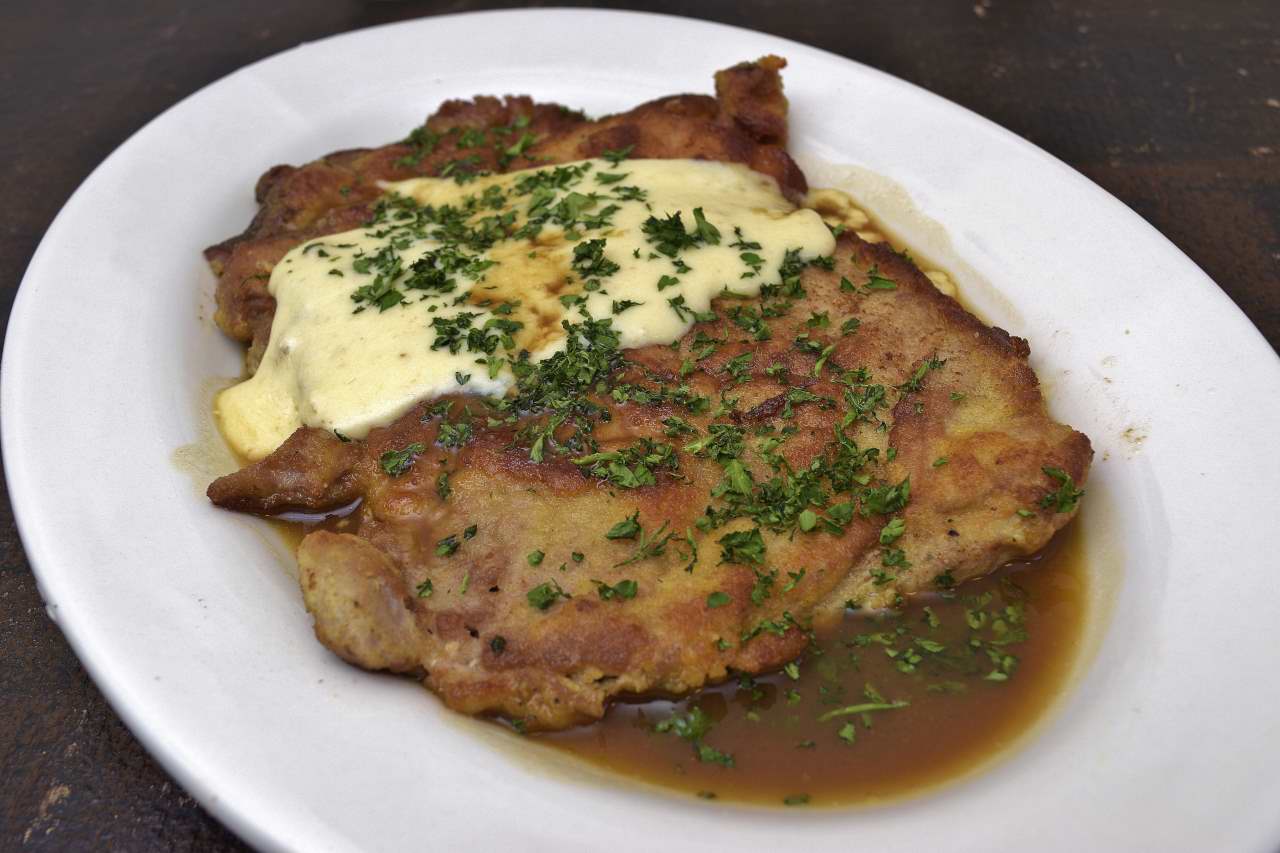 Add the espagnole to the pan with a pinch of salt and a few drops of water. Bring to a simmer, add 0.5 oz/15 g of the cold butter, stir and pour into a measuring cup or squirt bottle. The sauce should be thin enough to pour out without leaving a significant amount behind in the pan. I hate cleaning pans in between quick steps. Return the pan to the low burner, add the other 0.5 oz/15 g of butter to the pan to melt, use the shaker to add just enough flour to tighten the butter, add the cream and a pinch of salt, bring to simmer, stir once and turn off the burner. Do not whip. Pour the cream sauce over the cutlet and then drizzle the edges with the espagnole. 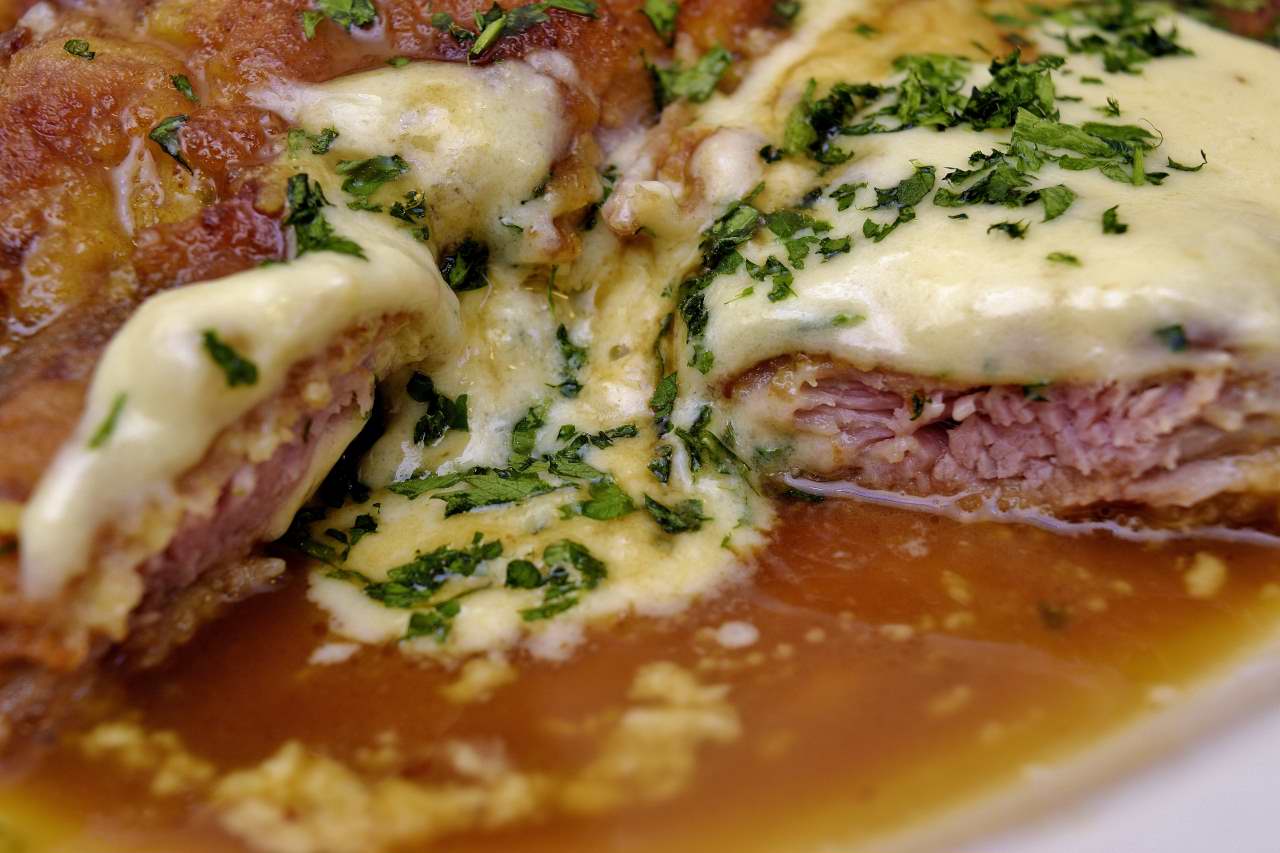 I have not been able to figure out a dessert form of sous vide smoked pork. I haven’t given up, though. Stay tuned.

While there may be a considerable amount of surface fat on a pork loin, there is usually very little intramuscular fat. Anyone who has ever enjoyed a beef rib eye steak knows the difference between fat on the outside and fat on the inside.

For my money, bone-in or boneless pork loins are best relegated to curing, smoking, and/or slicing thin. But what if we want a pork steak, something that comes out the way we always HOPED a pork chop would be?  Sous vide processing + pork shoulder + smoke is the best answer I have found.
This recipe is not really a recipe, but more of a catalog of ideas. Breakfast, lunch, dinner--all possible!