Sous vide eliminates the challenges of poultry perishability and the complexities of preparation that plague this popular restaurant dish.

Preheat the sous vide bath to

Seal the chicken breasts in vacuum bags and stage into the bath. Process for a minimum of

This will pasteurize the chicken. After the time has elapsed, remove the chicken breasts from the bath and submerge in iced/tap water until they achieve 70 F/21 C. Refrigerate to 40 F/4 C–this is necessary to maintain food safety. Held in this state, the sealed packages can be safely refrigerated for up to two weeks.

Remove the chicken breasts from the bags and pat dry with a clean towel. Sprinkle lightly with salt and white pepper. 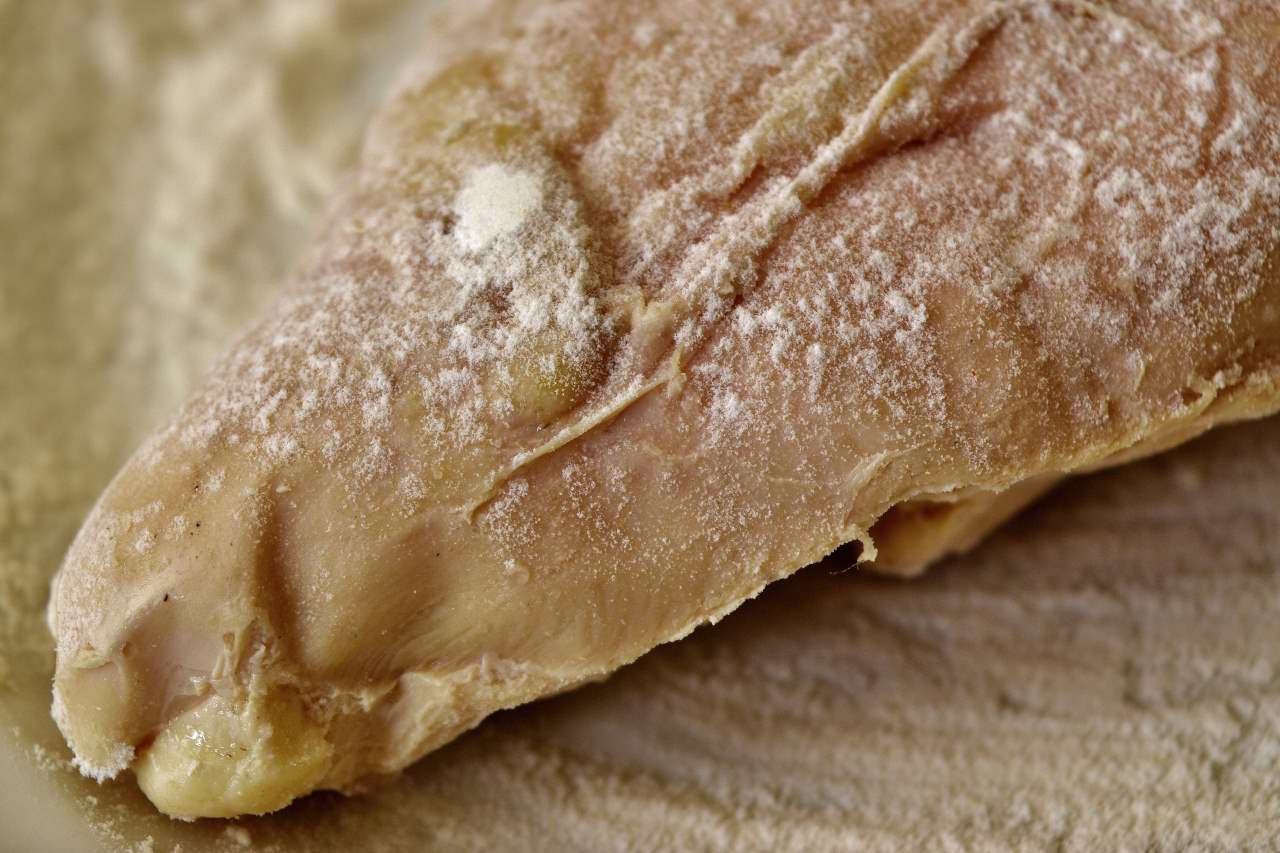 Dredge or sprinkle lightly with flour. Shake off the excess and set aside.

This is another of our “single pan” recipes. Bring three quarts of water to a boil in the large skillet. Put the asparagus in a heat proof dish, deep enough so that the spears can be covered with water. When the water comes to a furious boil, cover the asparagus with the water. Set aside.
Cook the spaghetti as per the package directions in the rest of the water.

Drain well and toss with a little butter and the cheese in serving dish. 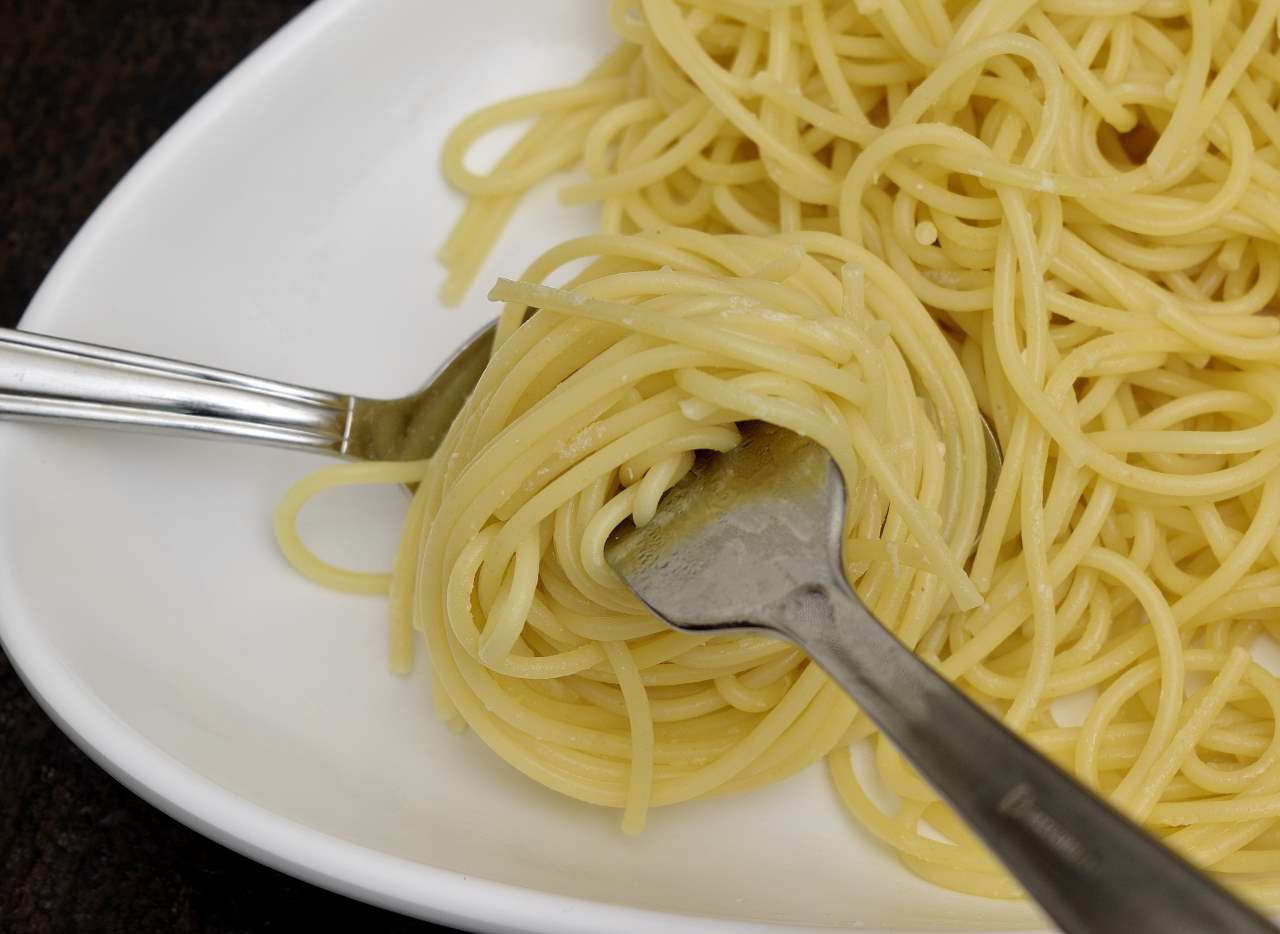 Using a serving spoon as a base, twist some of the spaghetti around the fork to form a coil. Remove the spoon and use it to push the coil off of the fork.

Continue until all the spaghetti has been coiled and placed. This makes service easier.

Arrange the asparagus on one side of the plate with the spaghetti and stage into an oven set to 170 F/77 C. 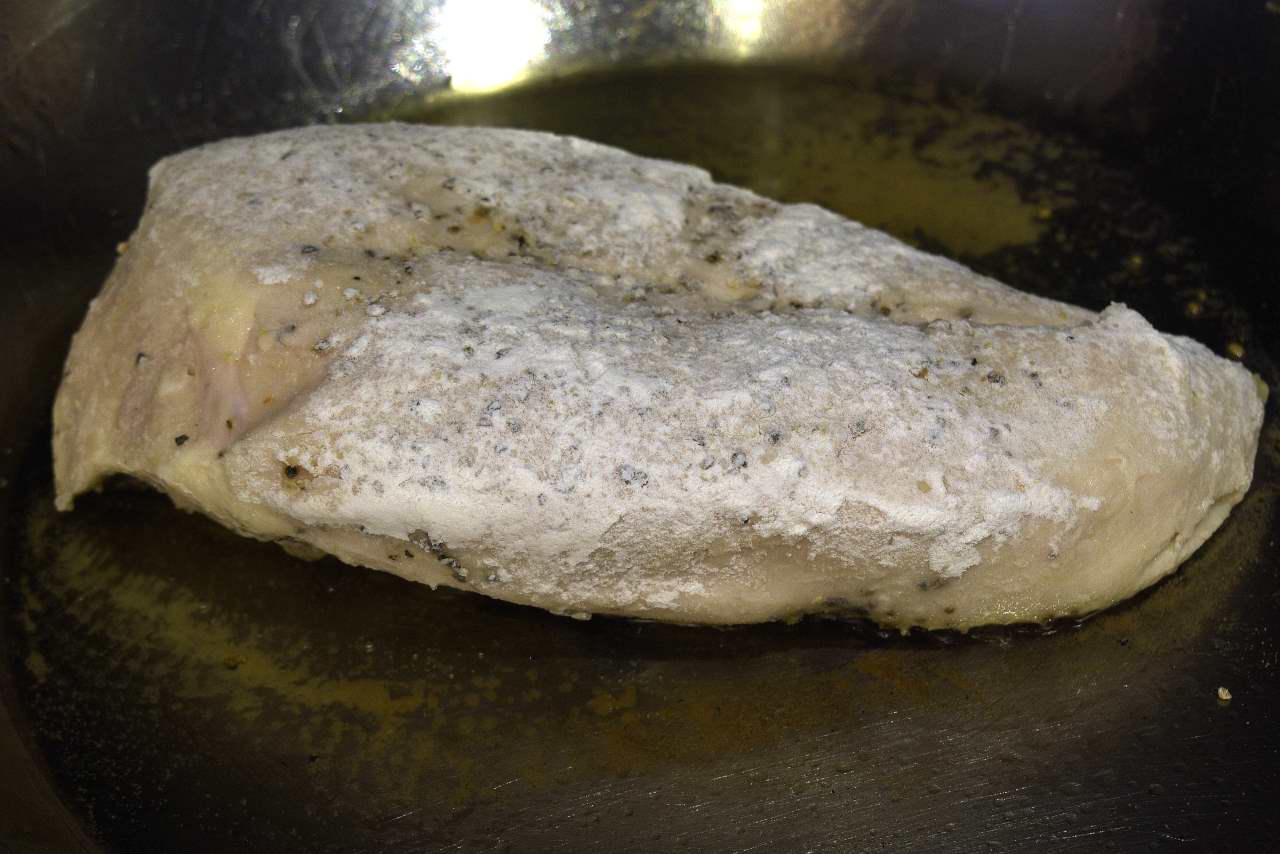 Using the same pan, heat the surface to a minimum of 250 F/121 C. Add enough oil to cover the bottom of the pan and carefully lay in the chicken breast(s). Do one at a time if necessary to avoid crowding the pan. 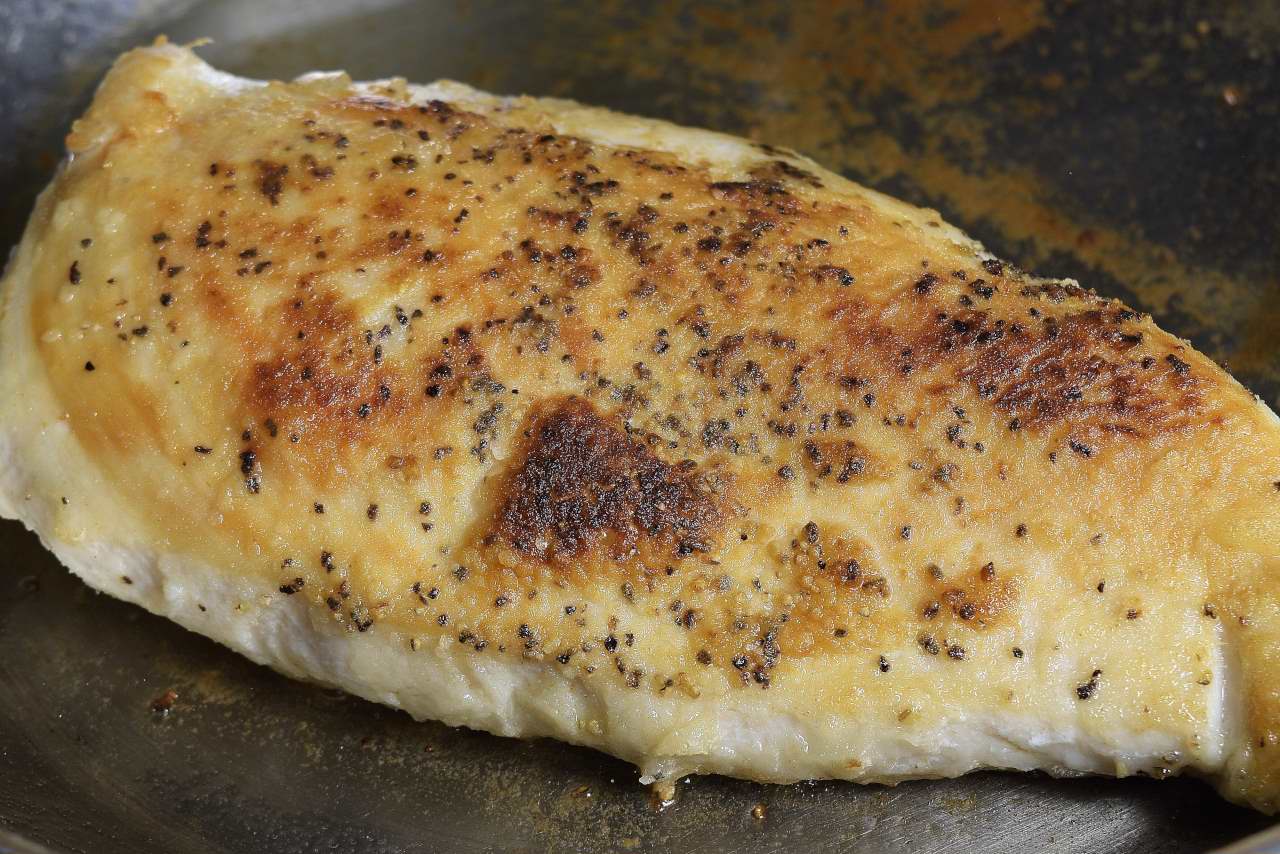 The first side that touches the pan should be the ultimate “top” of the breast as served. Brown the surface to the desired color before turning. Continue browning/heating the chicken in the pan. Use a probe to make sure the center of the chicken is at least 125 F/58 C. Remove the chicken from the pan and set aside.

Note: Many cooks want to leave the chicken in the pan while they finish the sauce. This is handy if you have nowhere to stage the breast in the meantime. The practice is of no benefit to the chicken nor does it improve the sauce. 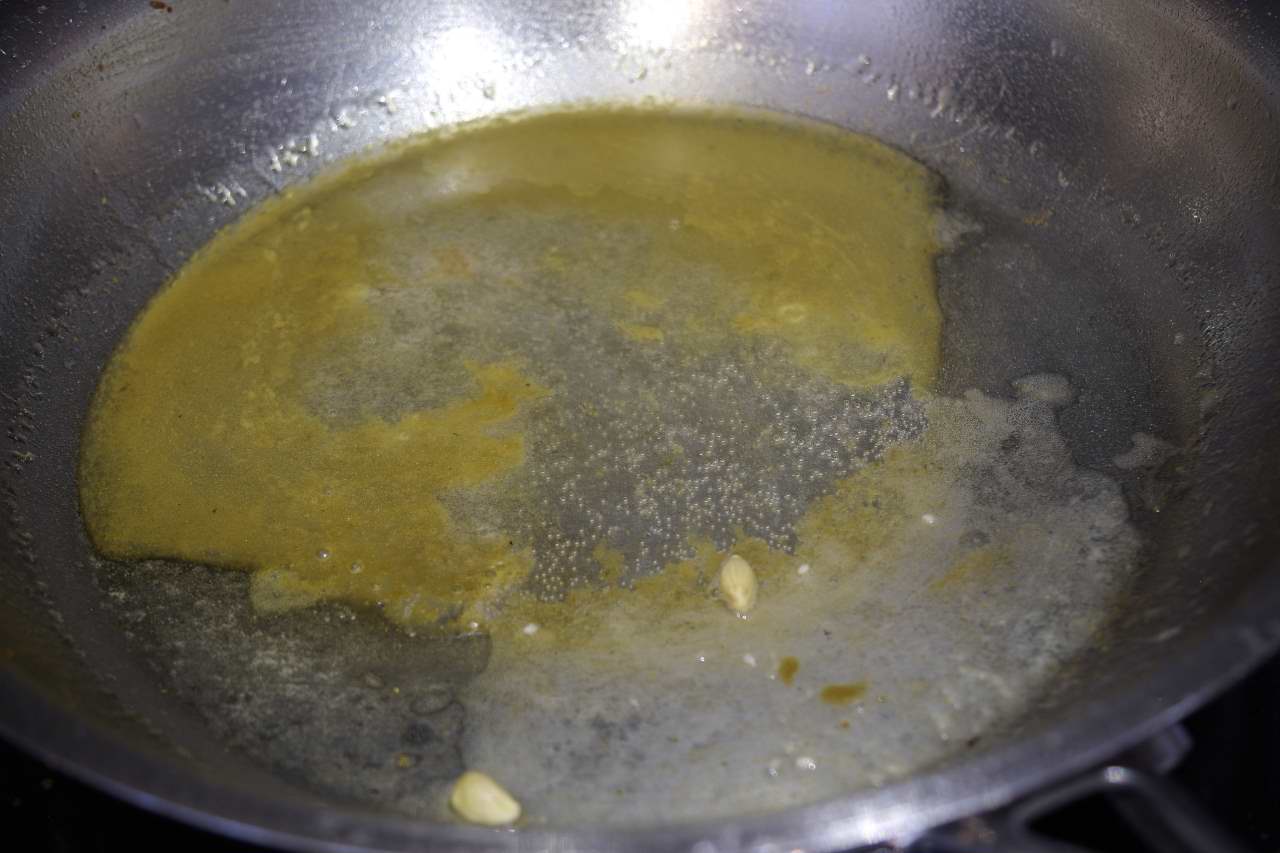 Add the white wine to the pan–it should come to a boil immediately. Add the lemon juice. Reduce this liquid by 2/3 and turn off the heat–you should have 1 oz/25 ml left in the pan. I use a  tiny slotted spoon to remove any lemon seeds that find their way in there,

In the traditional method, this reduced liquid is used as the continuous phase to make an emulsion with butter as the dispersed phase. Slowly introducing the cold butter into the hot liquid over low heat is second nature to skilled professional cooks, but challenging to the home practitioner. You may want to purchase some “insurance.” Here is what you do.

Put some flour in a shaker or a strainer/sifter. Shake/sift a scant 1/3 teaspoon of flour over the ROOM TEMPERATURE reduced liquid. This is what we usually call “a tiny pinch.” It will dissolve and disappear–if it doesn’t, you added too much! There are three teaspoons in one Tablespoon. One Tablespoon of flour will thicken 1 cup/200 ml of water based liquid–that should give you an idea of just how little you need. 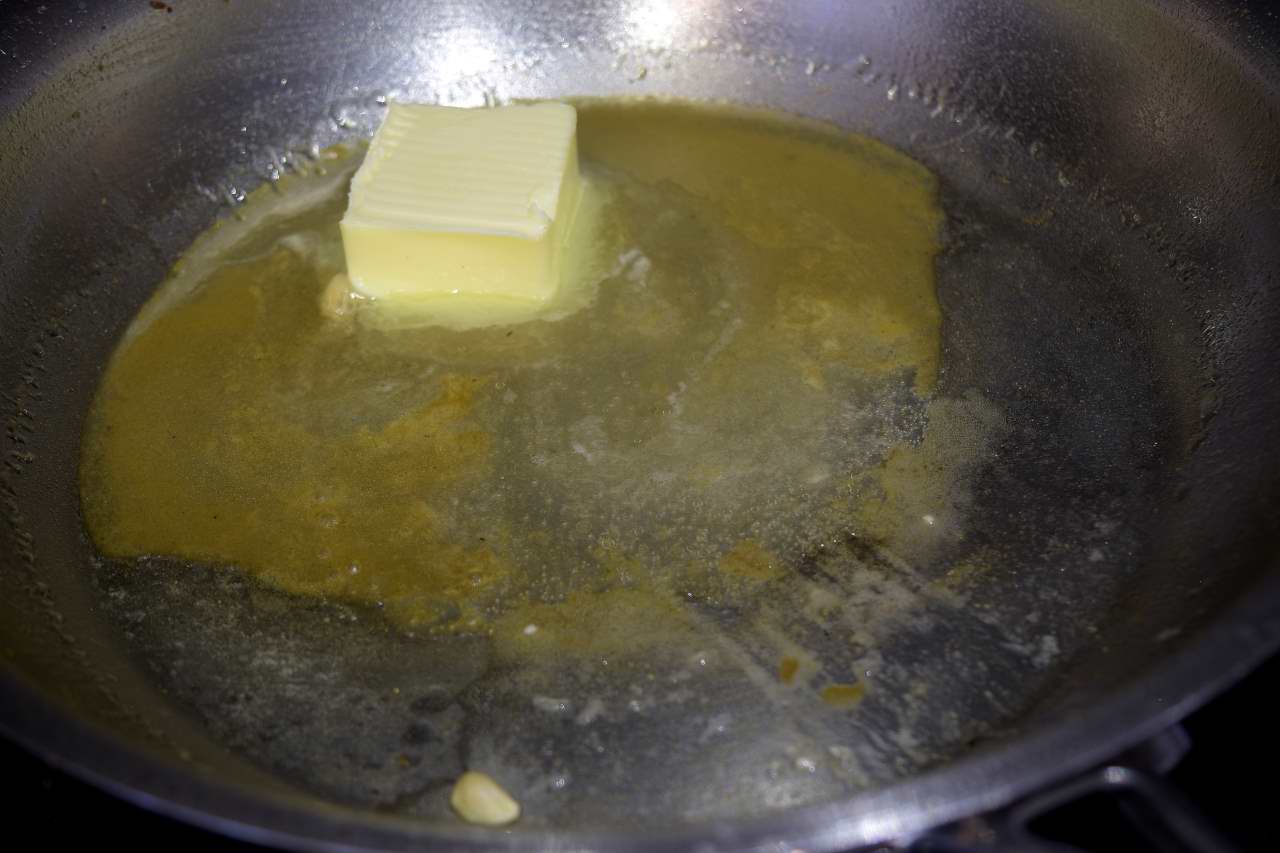 Cut the cut the butter into fourths–1 oz/28 g each. Turn the heat on medium low, and it will start to just simmer and thicken slightly. Add a pat of butter to the pan and push it around in the steaming liquid as it melts. I like to use a fork or tongs. 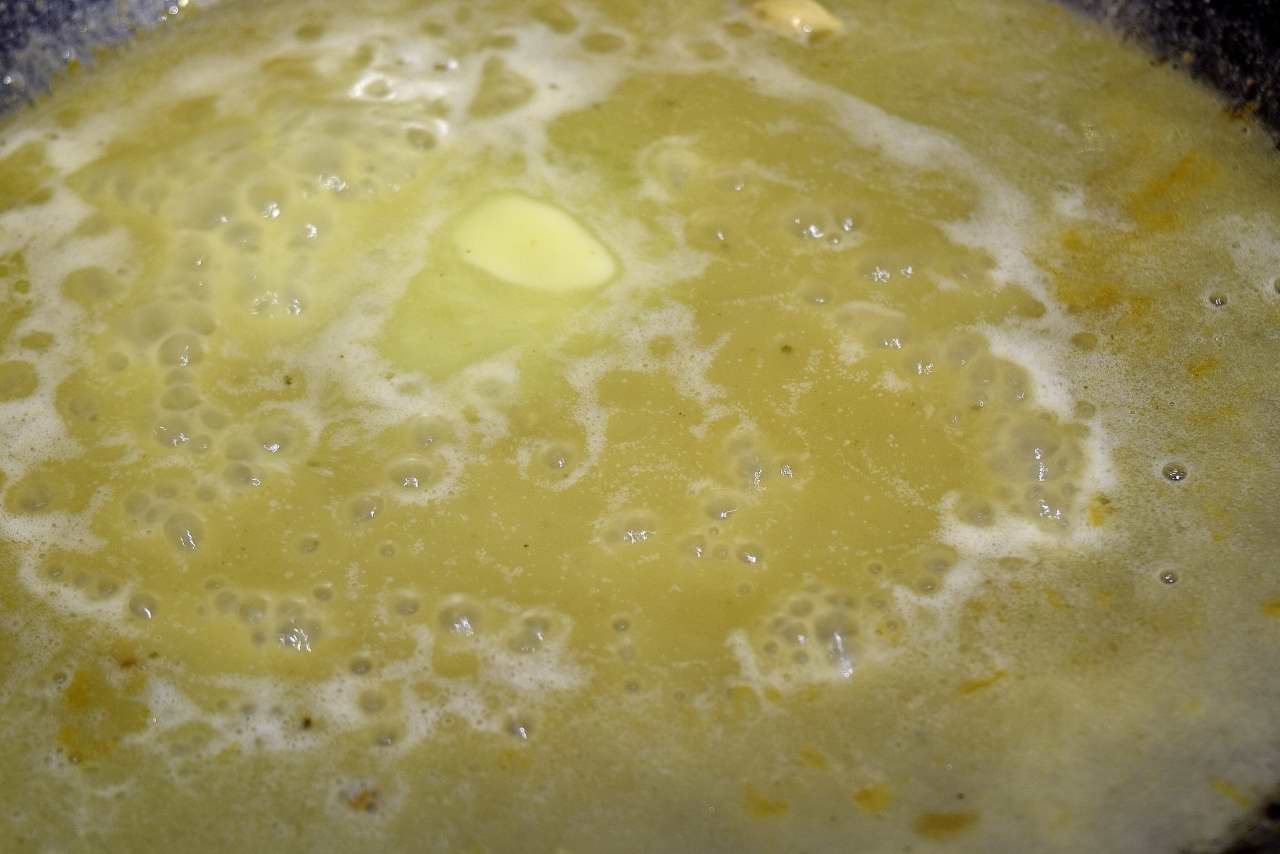 Then, add another pat of butter and continue until the butter is all absorbed. Add a pinch of salt. Set aside.

Note: The sauce will break if it is too hot, and coagulate if it is too cold. The finished sauce should be 140F-185F/60C-84C. Most chefs turn off the pan to melt the last pat. 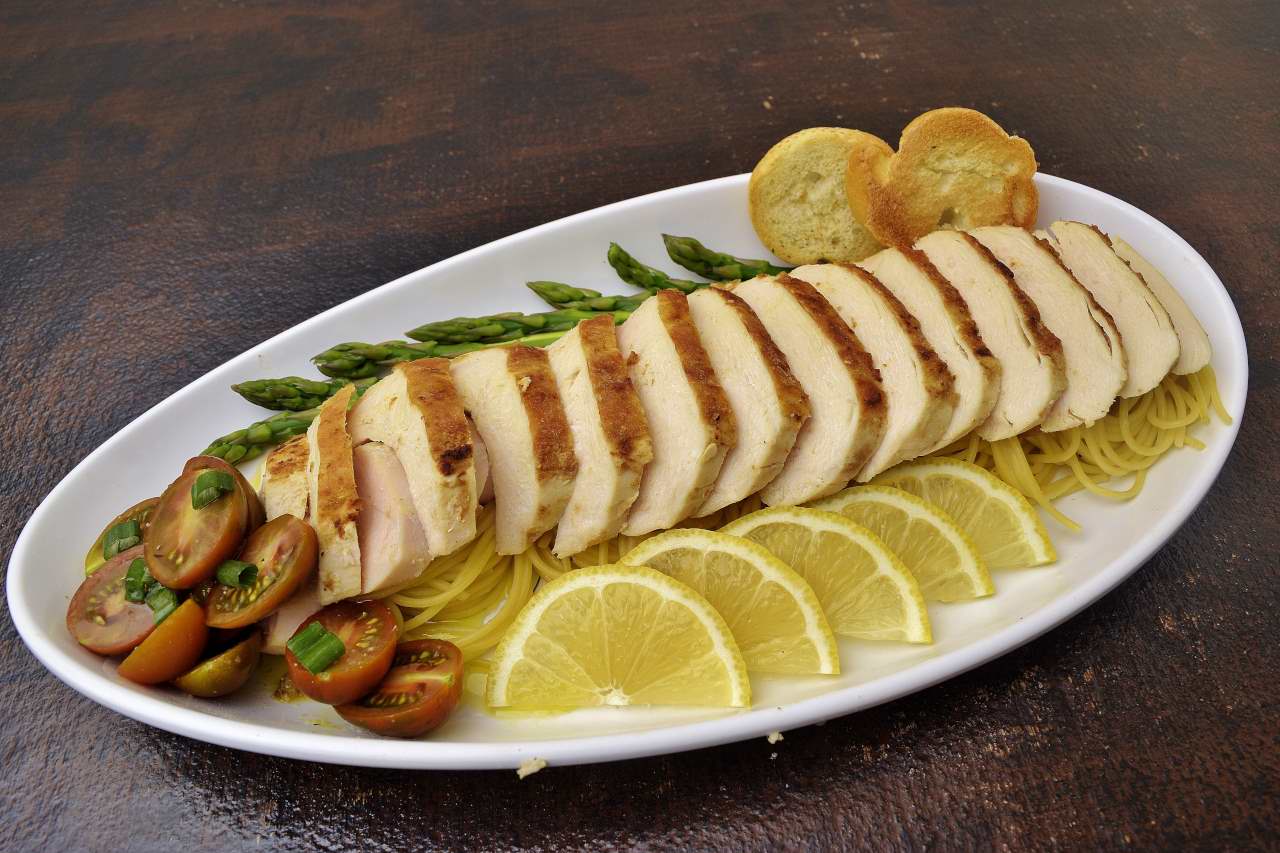 Slice the chicken breast on the bias as shown and arrange it on the spaghetti. Put the tomatoes at one end and drizzle with the salt and pepper, a few drops of olive oil and balsamic vinegar. Arrange the lemon slices as shown. 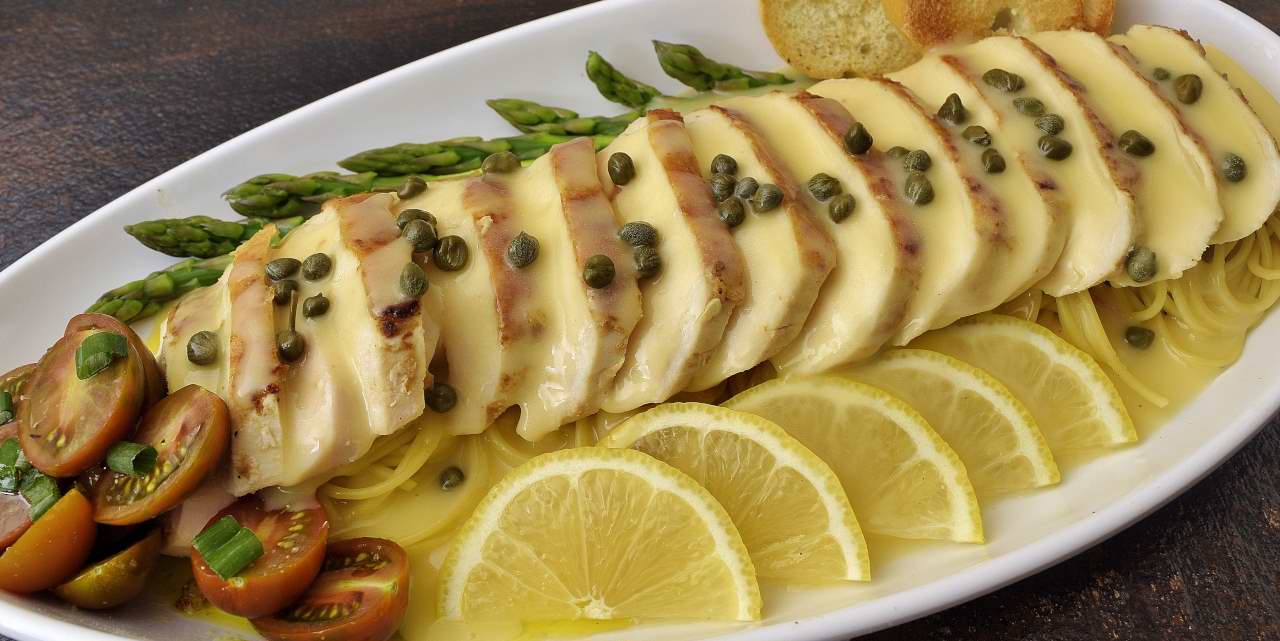 Pour the sauce over the chicken, sprinkle with capers. Sprinkle the thin sliced scallion (or chopped parsley) over the top and serve. Just like downtown! 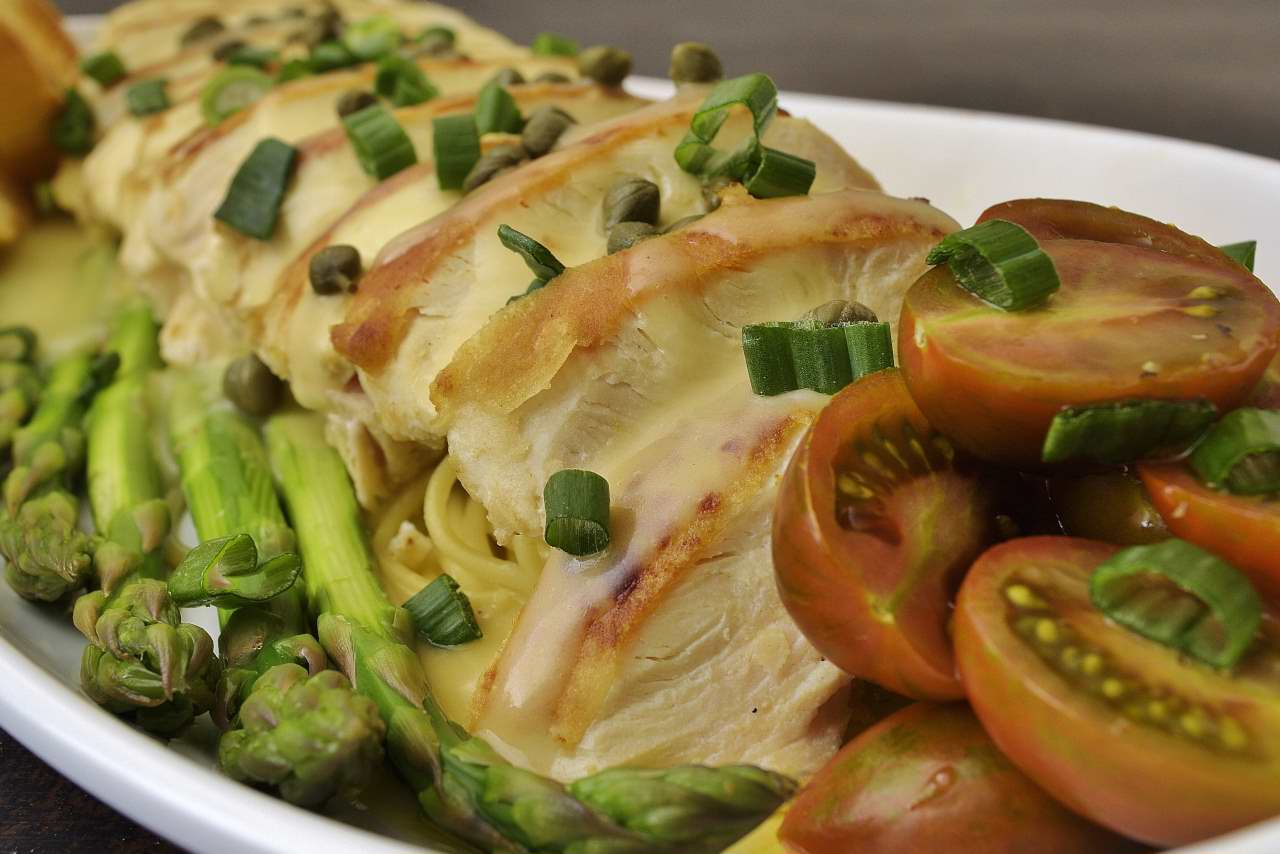 One would hope that duplicating chicken piccata at home would be easily achieved. Because of the greatly increased size of chickens sold in the market, sauteing such a large breast from the raw state (up to 1 lb/450 g in some cases) usually results in an either under-cooked or dry and tough finished product.
Sous vide eliminates inconsistency in doneness because of the precise temperatures utilized. The added feature of pasteurization removes the necessity to either serve chicken breasts within three days of purchase or freeze .
This recipe also reveals the particulars that create the smooth, velvety well emulsified texture of the classic caper sauce.