Top round is deceptively marketed as being tender if seared quickly and sliced thin on the bias--sous vide processing validates the claim. 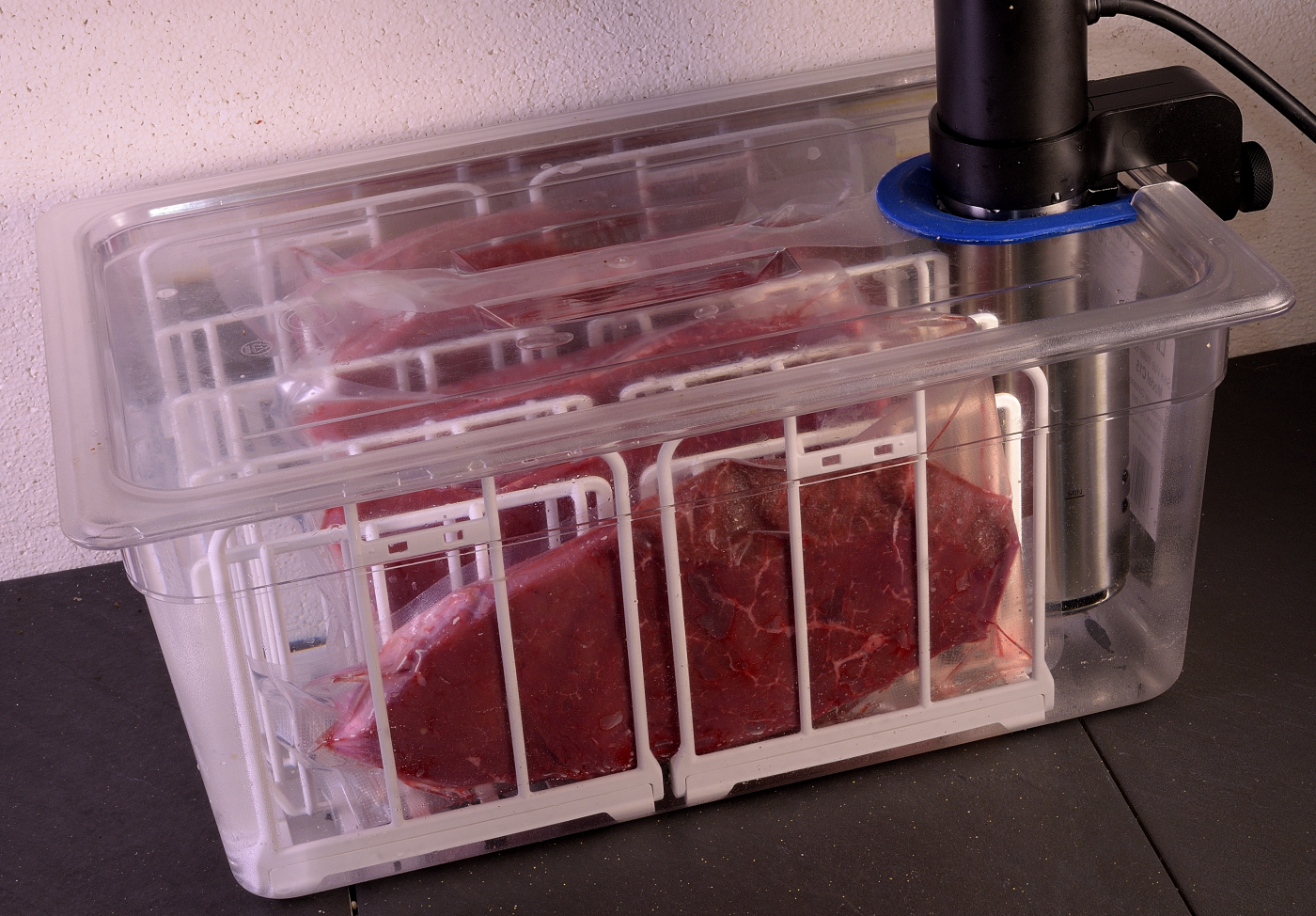 Vacuum seal the roast in heat rated plastic, load into a rack and submerge into the bath. Process at 129 F/54 C for 18 hours or “until it’s tender.” While time (at a given temperature) is responsible for a tender result, a clock cannot accurately measure tenderness. The interval required to achieve desirable results may vary even from one package to another in the butcher’s case. This roast was tender after 18 hours. In other circumstances, it may take considerably longer–up to 24 hours.

Since the pasteurized/preserved roast is quick chilled after processing, the searing/finishing process can be executed at your convenience any time within the next 2 weeks.

Once the desired level of tenderness has been achieved, remove the bag from the bath and submerge in iced tap water until the package achieves 70 F/21 C. Refrigerate at 40 F/4 C until you are ready to proceed to the next step.

Preheat the kitchen oven on the warming function to approximately 170 F/77 C. Stage your dinner plates into the oven so they do not put a chill on the other items. Make the brown sauce explained HERE, cover and keep in the oven. Packaged versions of the sauce are convenient and can also be used, click the link HERE. Dust the potatoes with powdered egg white, moisten slightly and sprinkle with kosher salt. Pan roast partially covered in the sauté pan at 250 F/121 C until browned on both sides. Stage the potatoes into the warming oven. Sauté the mushrooms at 350 F/176 C with a few drops of vegetable oil and a few drops of lemon juice. Keep the mushrooms warm in the low oven. 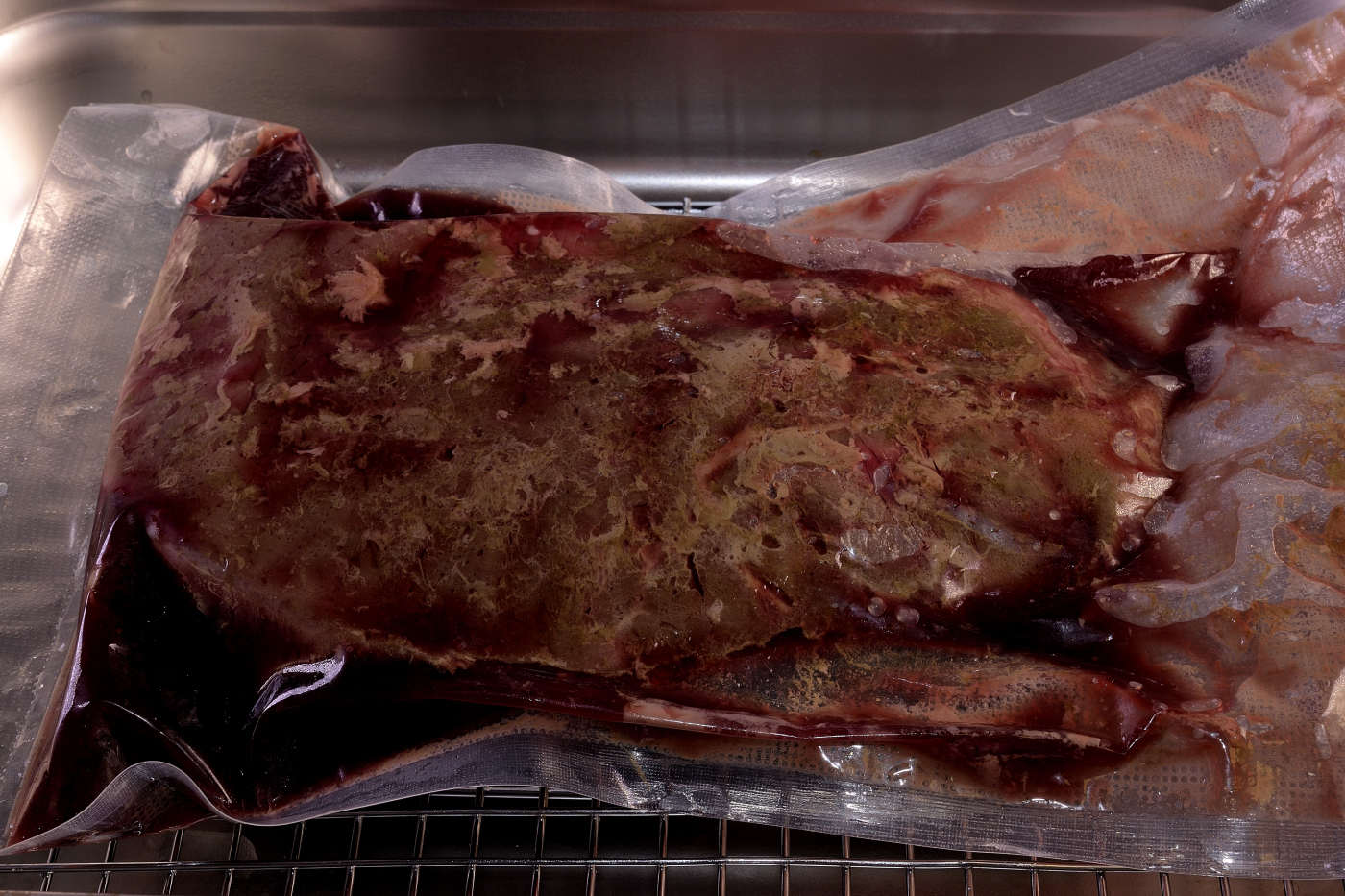 Submerge the package in hot tap water (110 F/43 C) or a working sous vide bath to melt the gel in the package.

Remove the roast from the package and let it drain on a rack. Clarify the juices according to the procedure explained HERE. These juices can be used to replace the water in any sauce or set aside for future use. 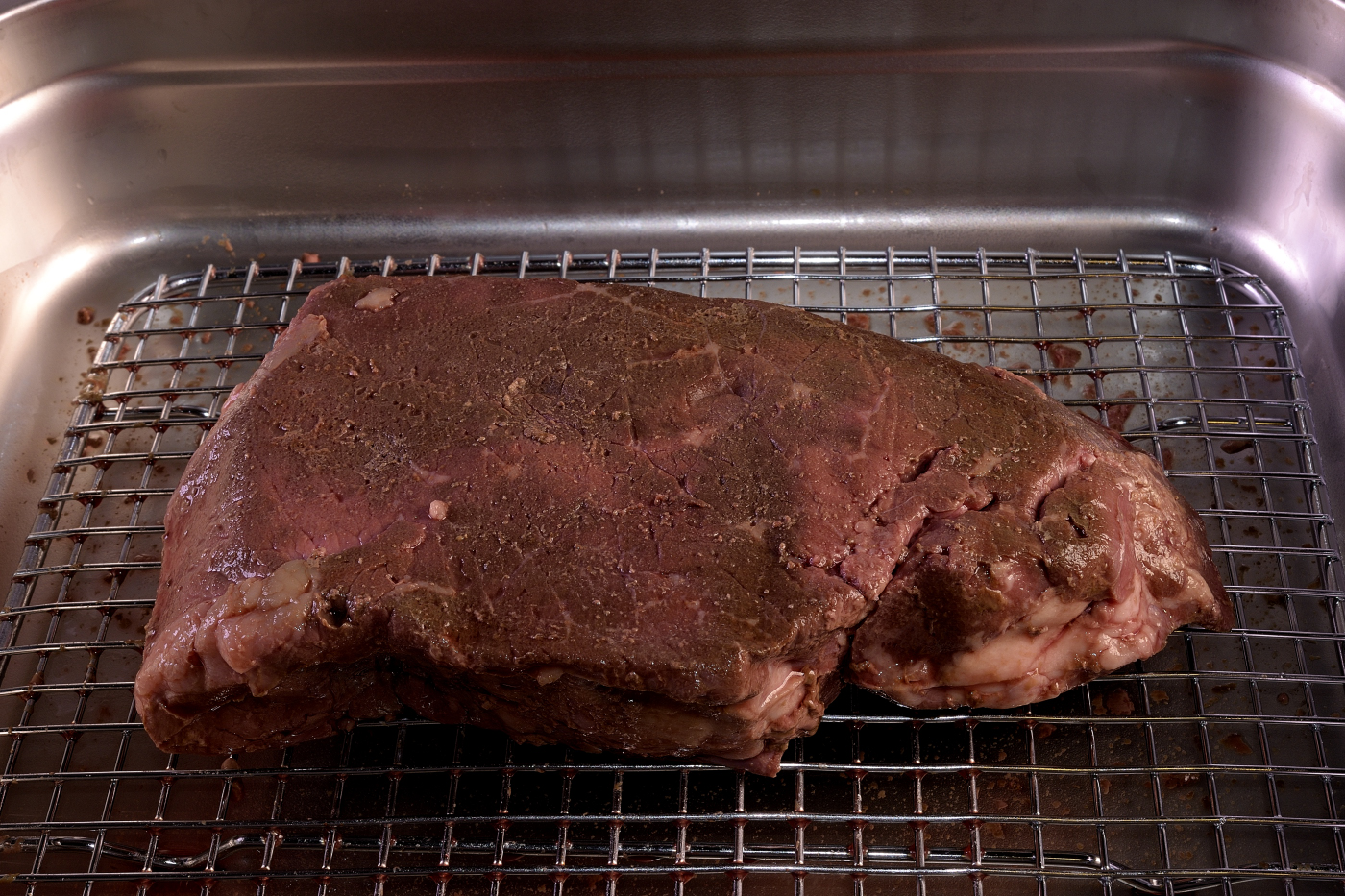 Pat the roast dry. Next, we want to create an adhesive surface for the seasoned crust to cling to. 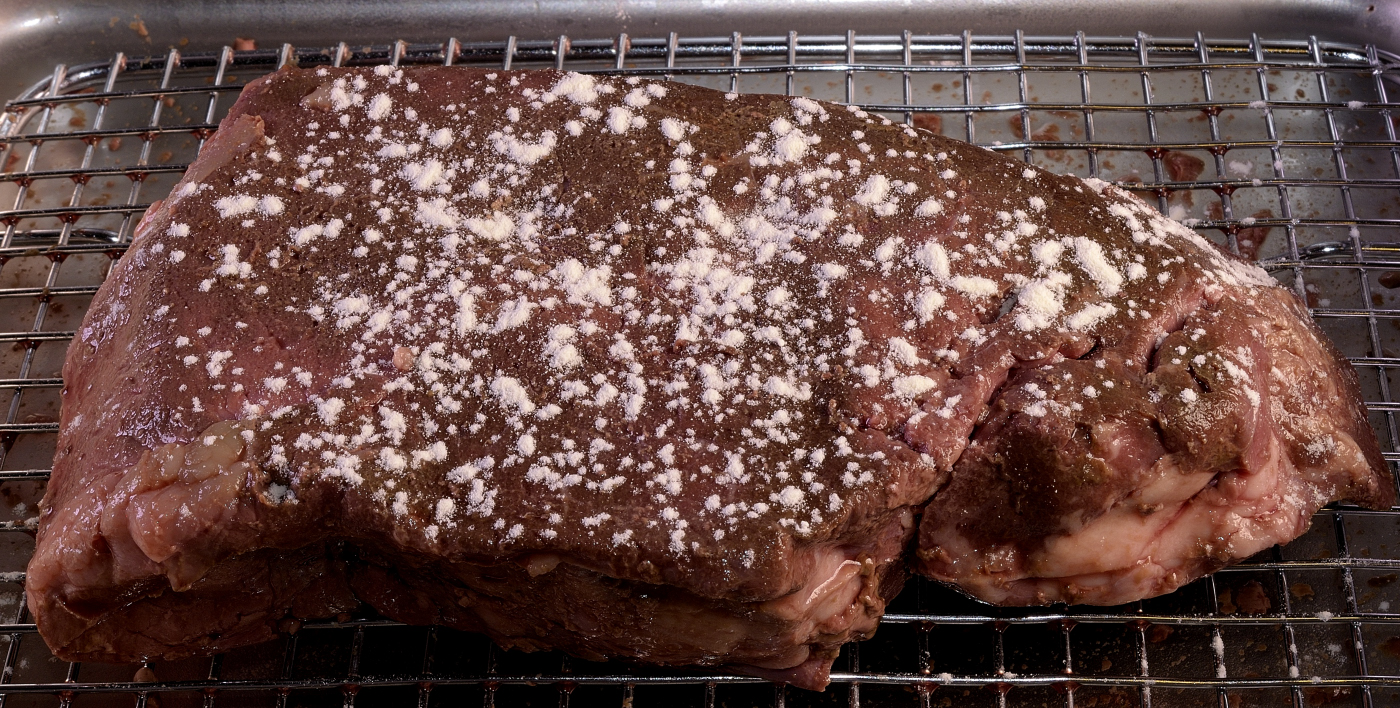 Use a dredge/shaker to sprinkle the surface with powdered egg whites. A fresh egg white beaten with an equal amount of water will achieve the same result–apply sparingly. 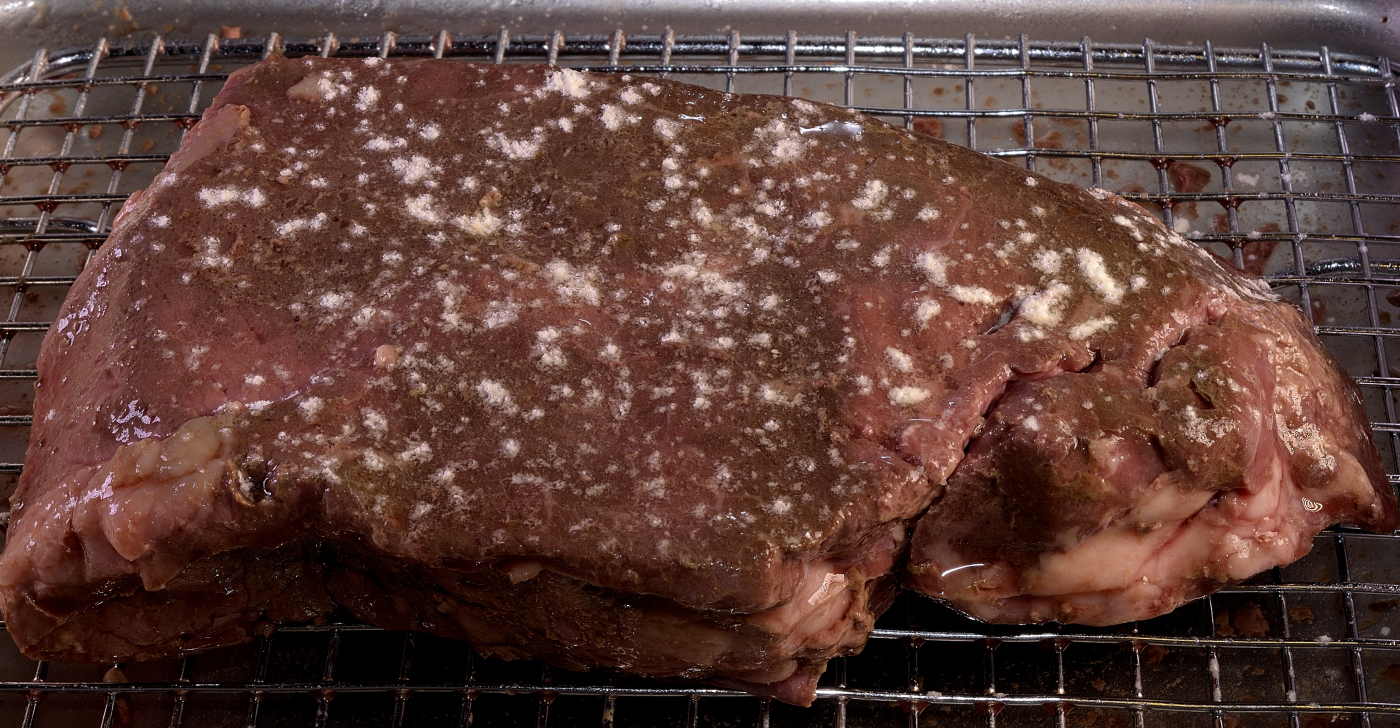 Use a spray bottle filled with water to dissolve the powdered egg white–skip this step if you are using fresh egg white. 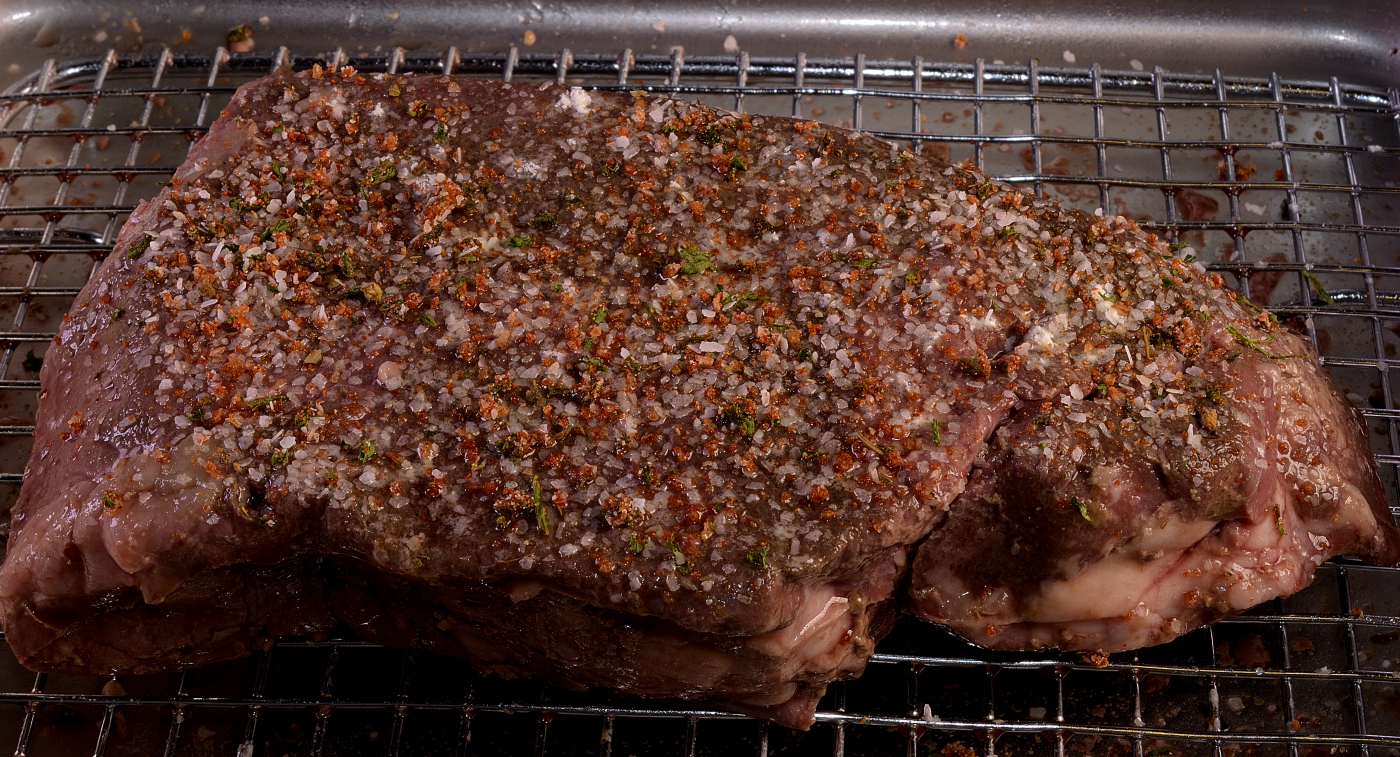 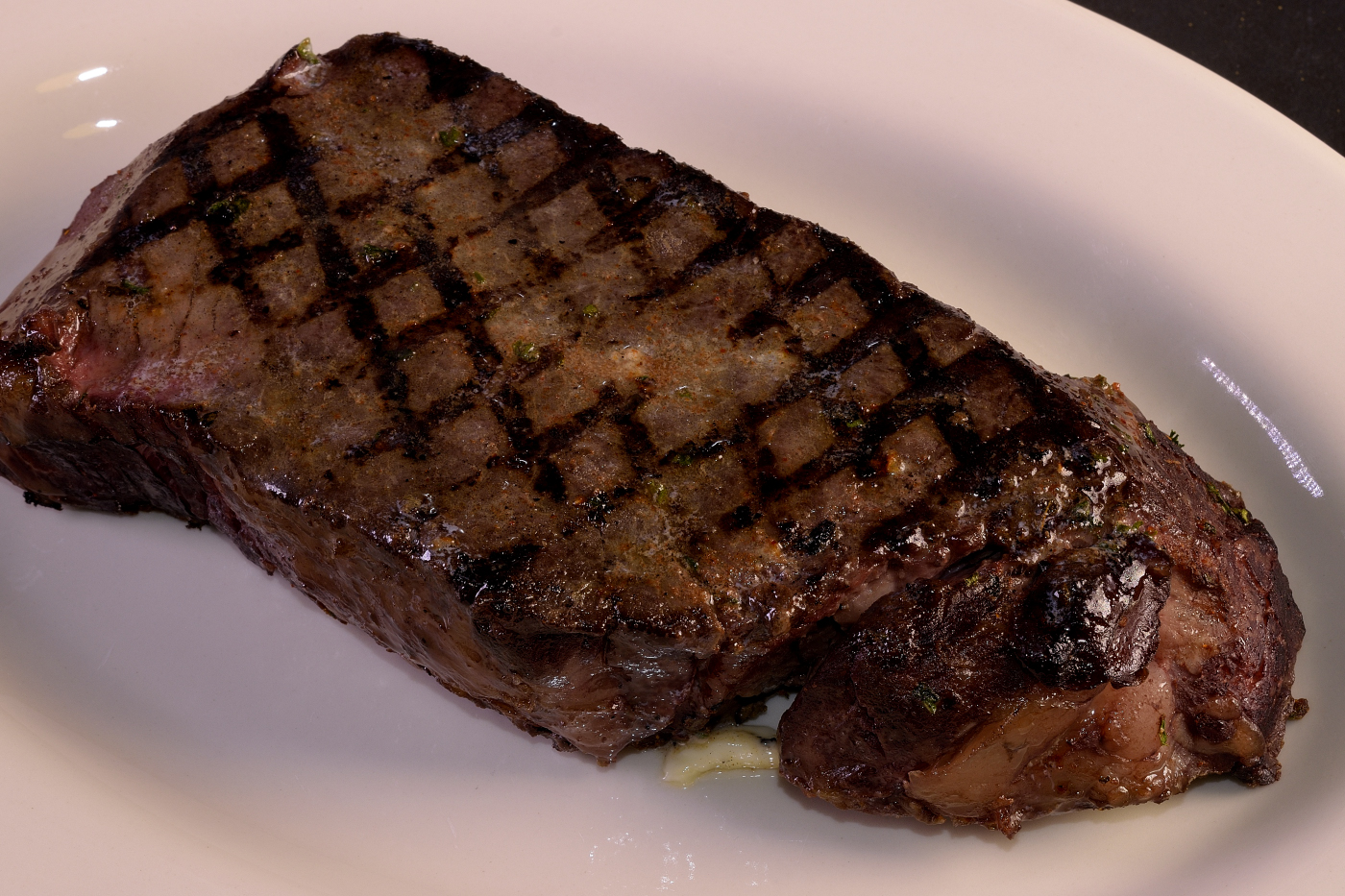 Sear the roast on both sides long enough to create the desired appearance. This process will take about 1 minute on each side, so the center of the roast will still be cold. Stage the roast into the 170 F/77 C warming oven for from 30 minutes to 1 hour or until a probe thermometer reads at least 125 F/52 C (mouth hot). 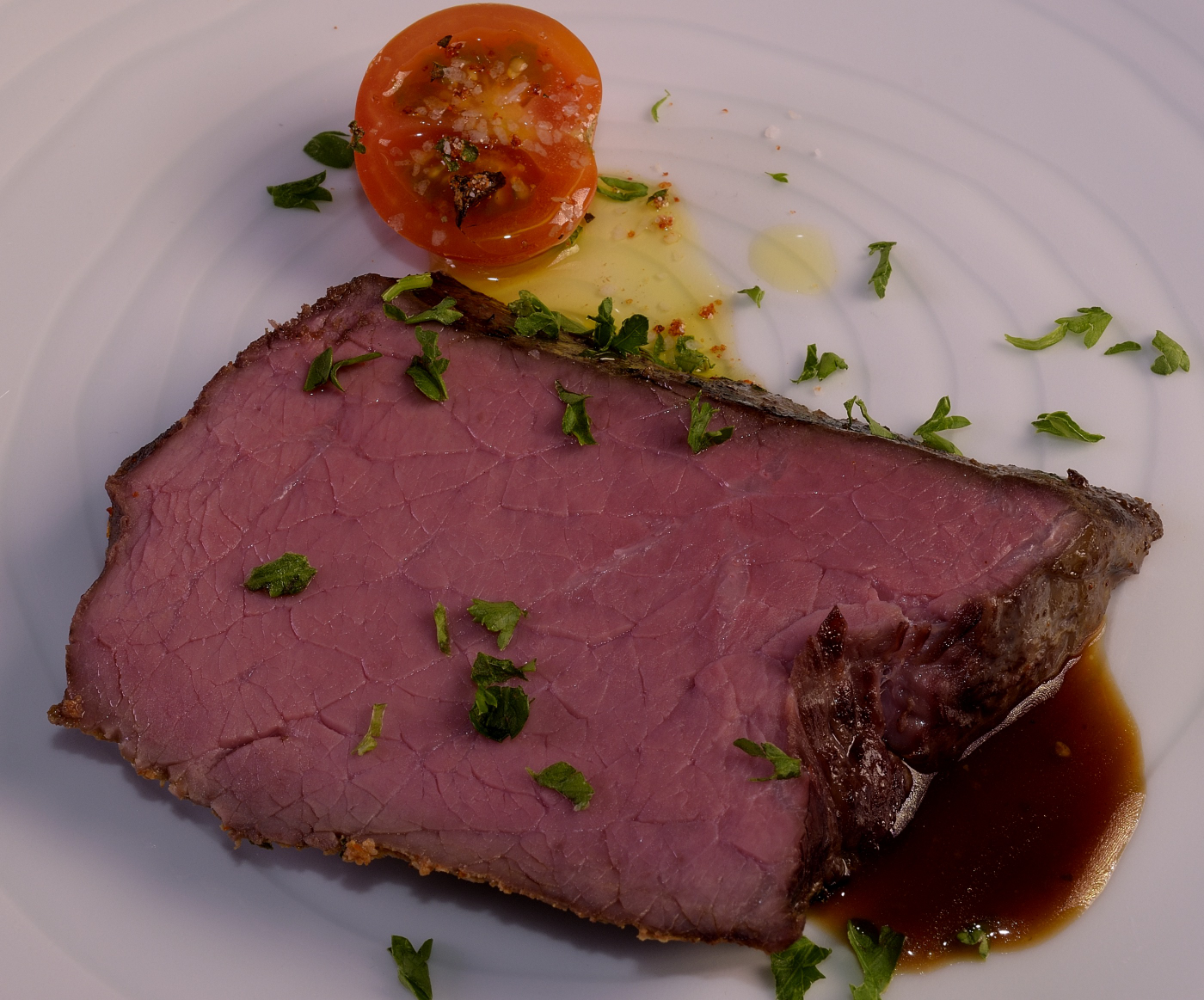 Sliced thin on the bias, but finally as a matter of preference–no longer a matter of necessity. 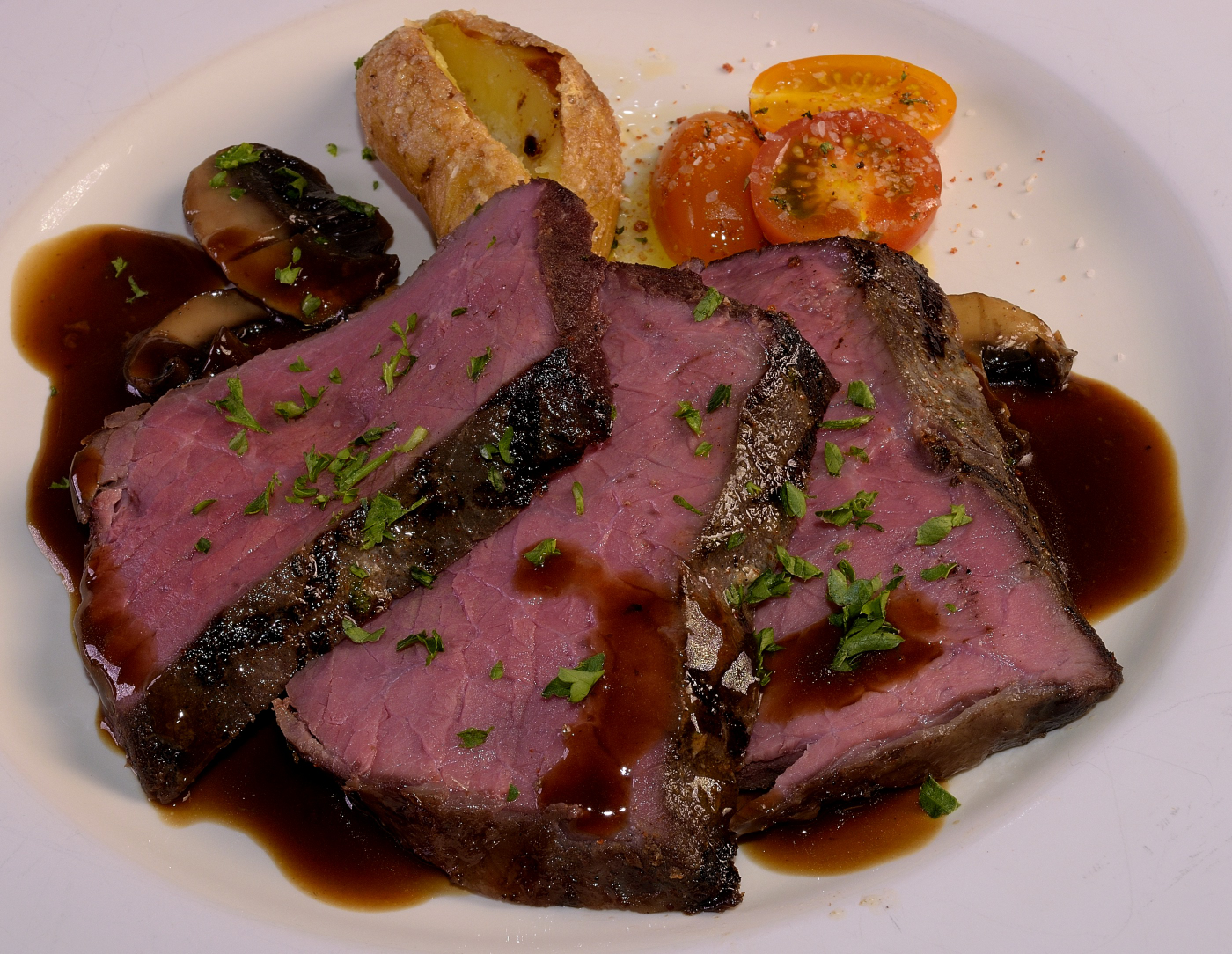 Place the mushrooms on sauce underneath the roast so as not to conceal the meat. Drizzle the cherry tomatoes with a few drops of olive oil and season. 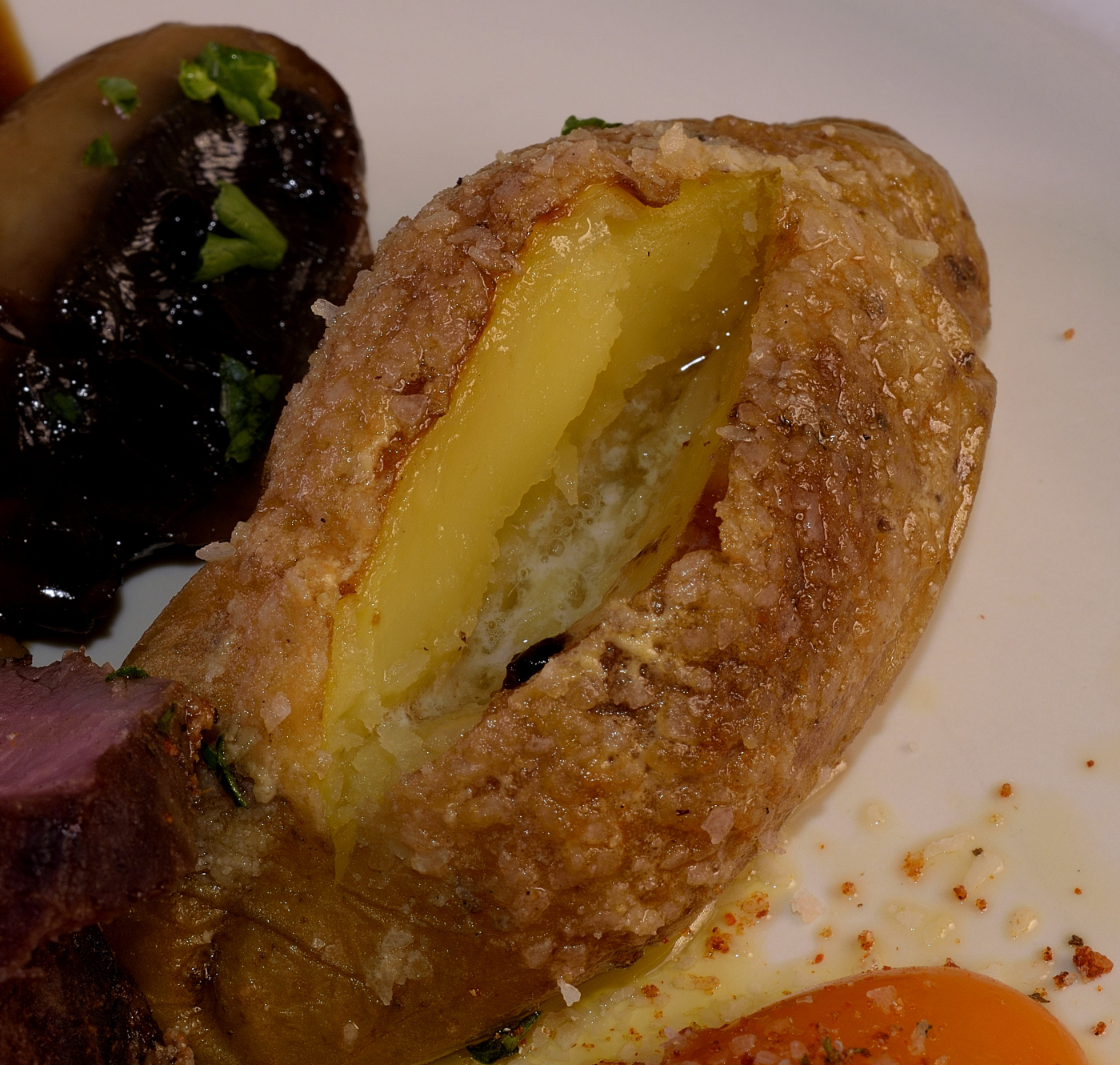 The potato can be cut and served as a “mini” baked potato. 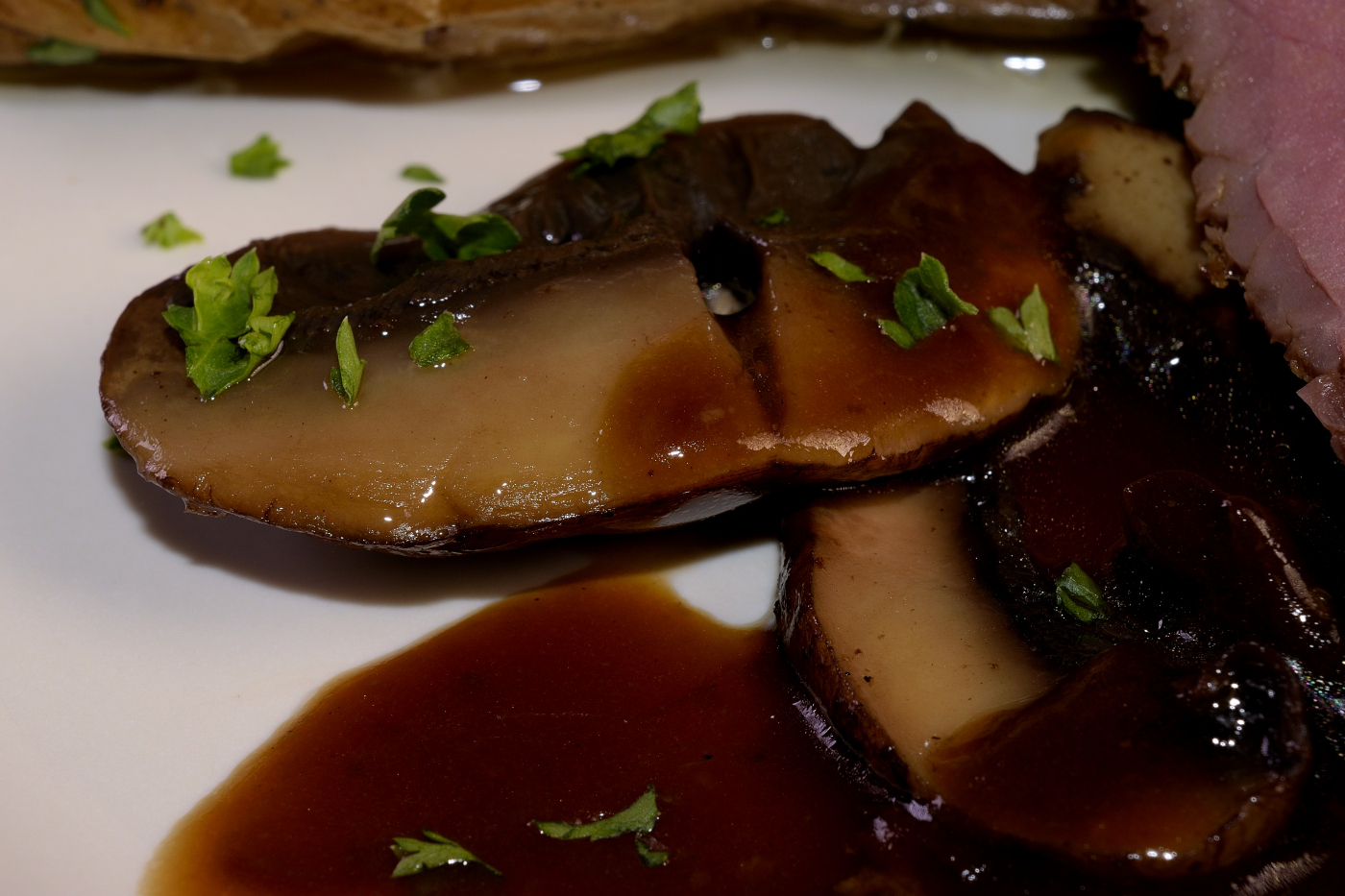 I never saw a London Broil in London, but the mushroom sauce is a common accompaniment on this side of the pond. 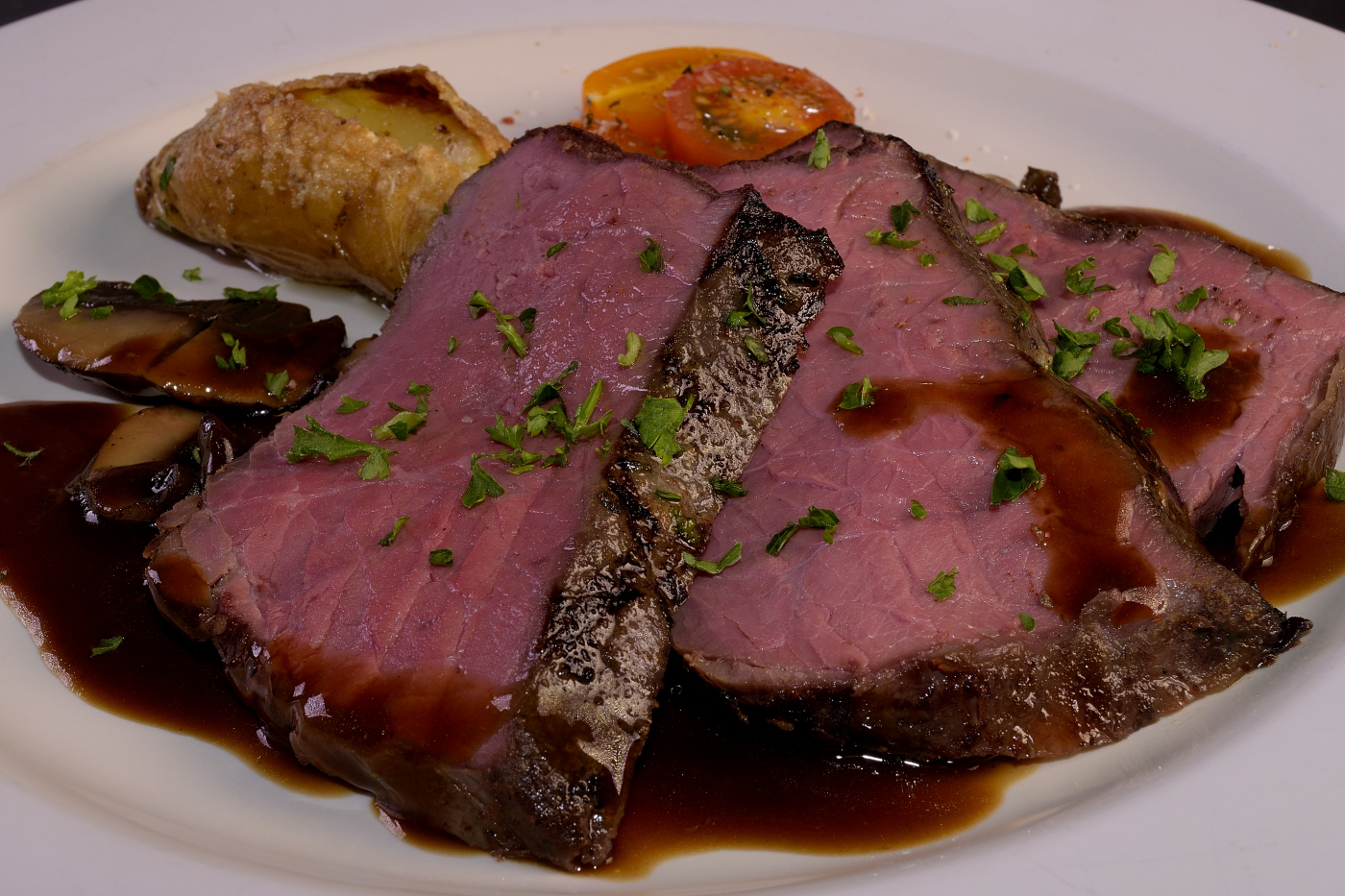 Chefs usually shingle the roast from right to left so that the diner’s natural impulse leads him/her to the uppermost slice. 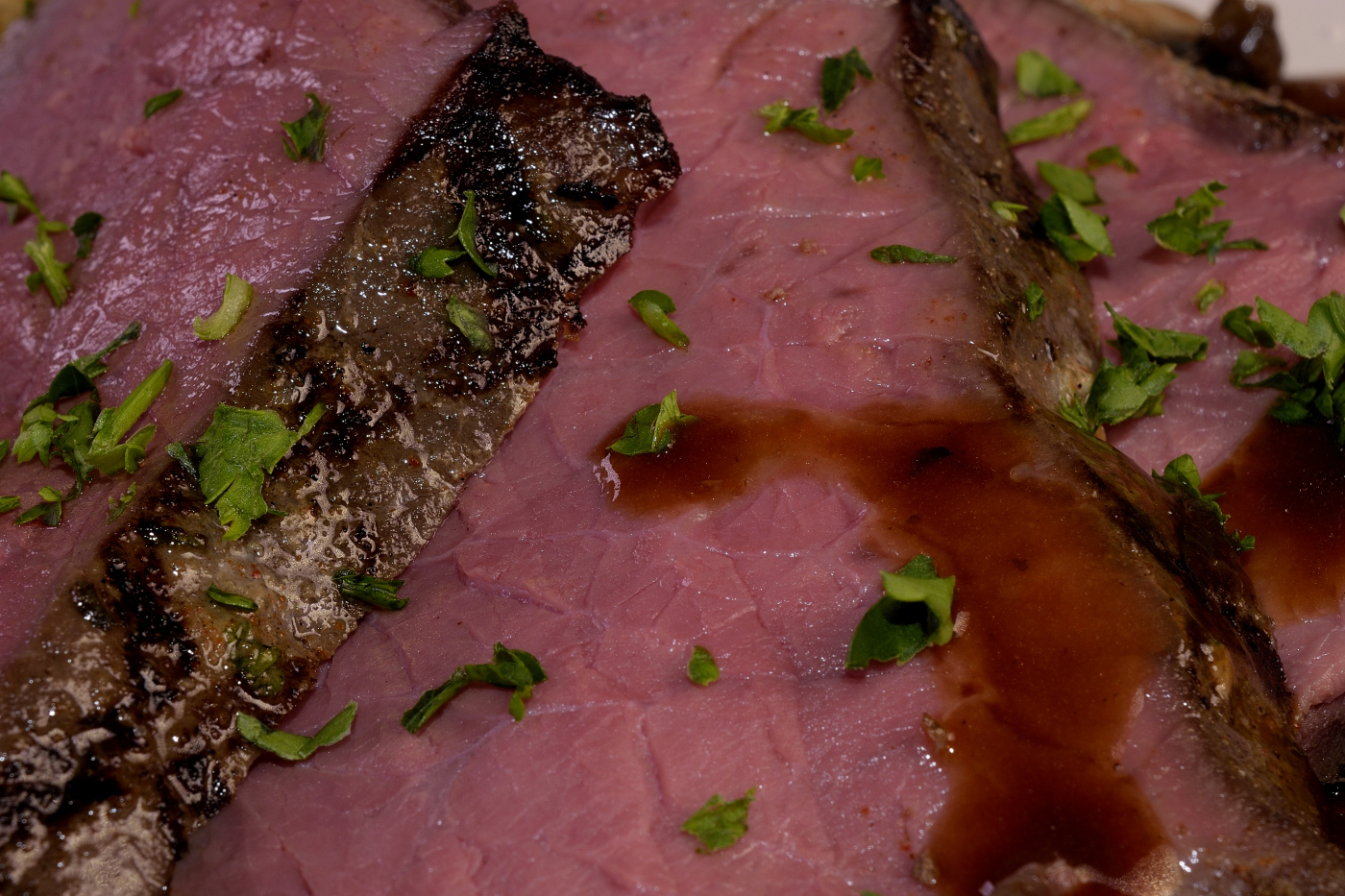 Those familiar with my work know that I favor chopped parsley.

There is no anatomical section of a steer/heifer called the "London" muscle. This romantic term is intended to stimulate sales of primal cuts that, while somewhat leaner than brisket, are almost as tough. Competitive pricing (historically, anyway) made a certain amount of chewiness tolerable.

Sous vide changes all that. While slicing on the bias creates a favorable presentation, no longer does the practitioner's carving knife--nor his/her teeth-- need to be razor sharp. Properly applied sous vide processing makes that unnecessary.