The combined flavors of chicken and buttermilk evoke fond memories. The introduction of sous vide processing makes things easier than ever.

Mae Ploy Sweet Chilli dipping sauce, or your own favorite. There is no shame in ketchup. 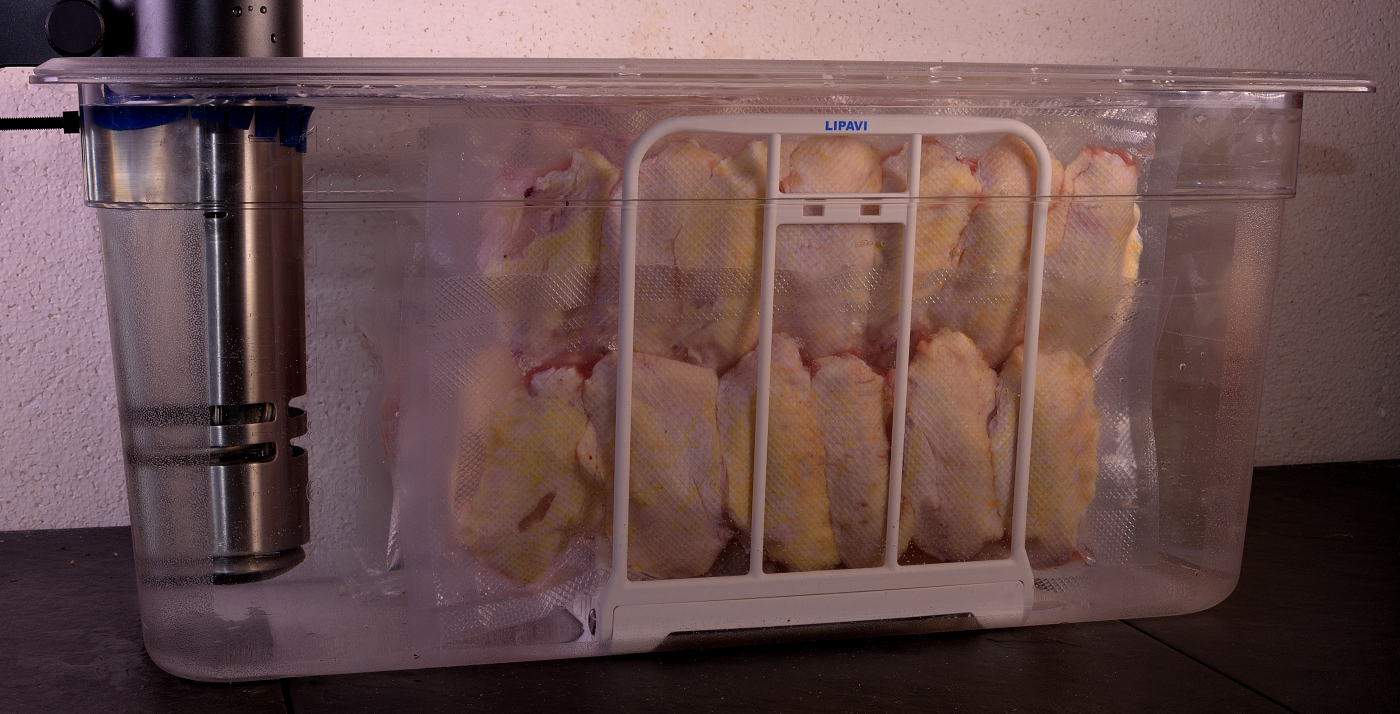 Process the wings for a minimum of 5 hours to pasteurize.

After the time has elapsed remove the bags of chicken from the bath and submerge in iced/tap water until they achieve 70 F/21 C–about half an hour. Refrigerate to 40 F/4 C–this is necessary to assure food safety. As long as the bags are not opened, the chicken can be kept in this state for at least two weeks. 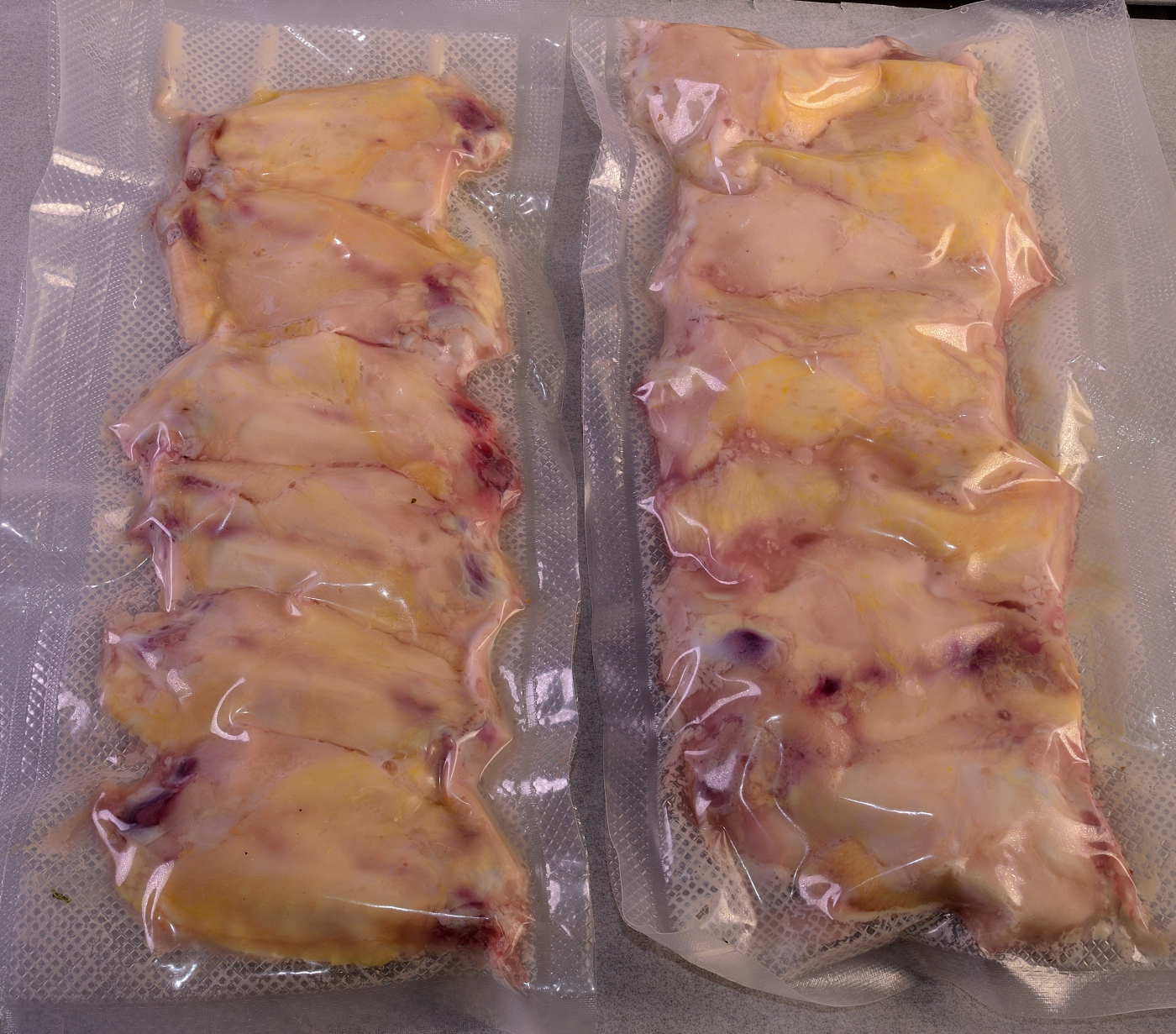 Dip the packages of wings in hot tap water (110F) or a functioning sous vide bath to dissolve the gel inside the bag. Note: the higher the temperature applied (and the longer the interval), the more moisture will be released from the wings. At this temperature (and for 5 hours), the amount of release is negligible. If there is more than 2 oz/30 ml of juice in the bag, visit HERE to learn what to do with it. 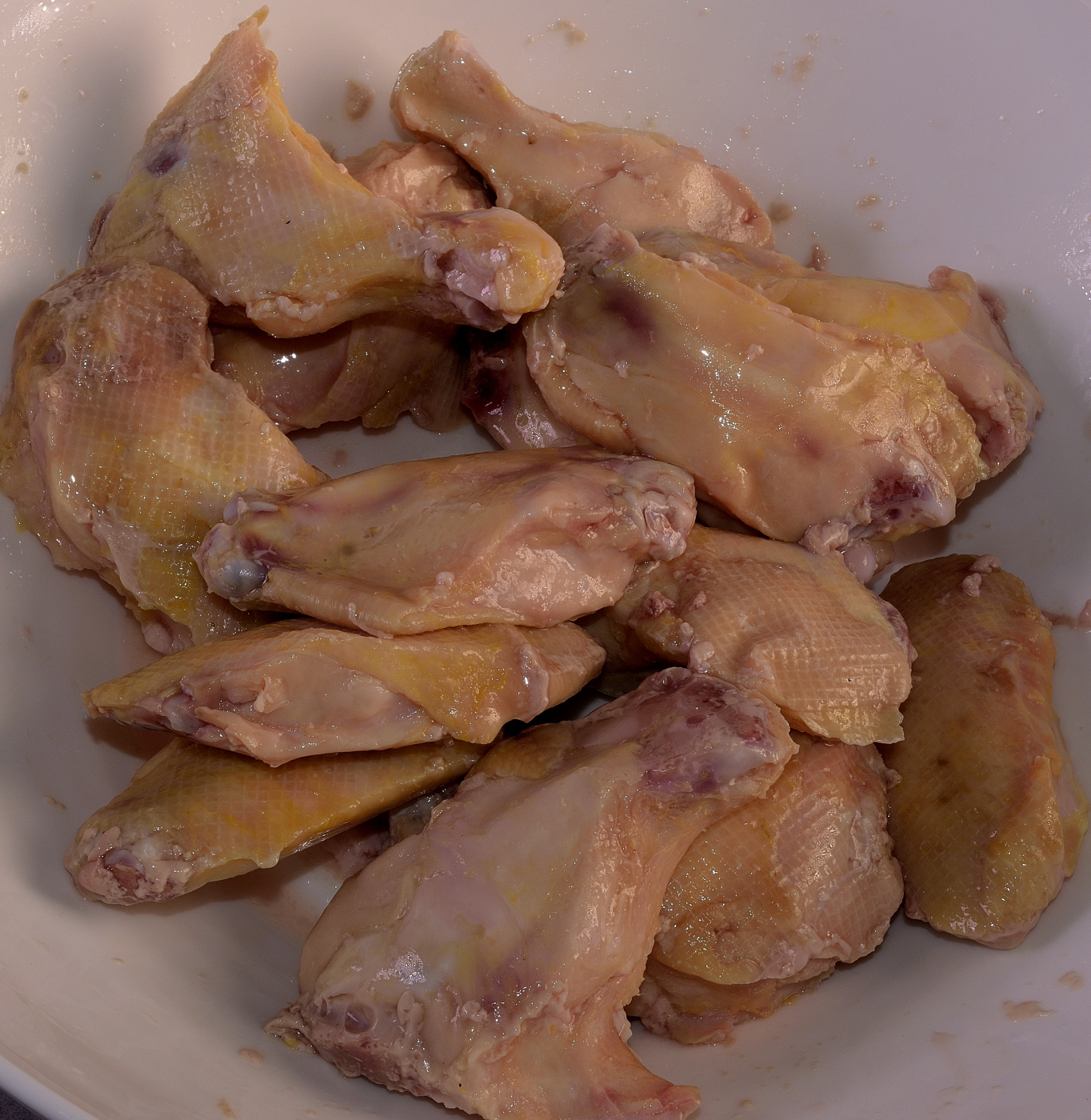 Remove the wings, drain, and stage into a large bowl. 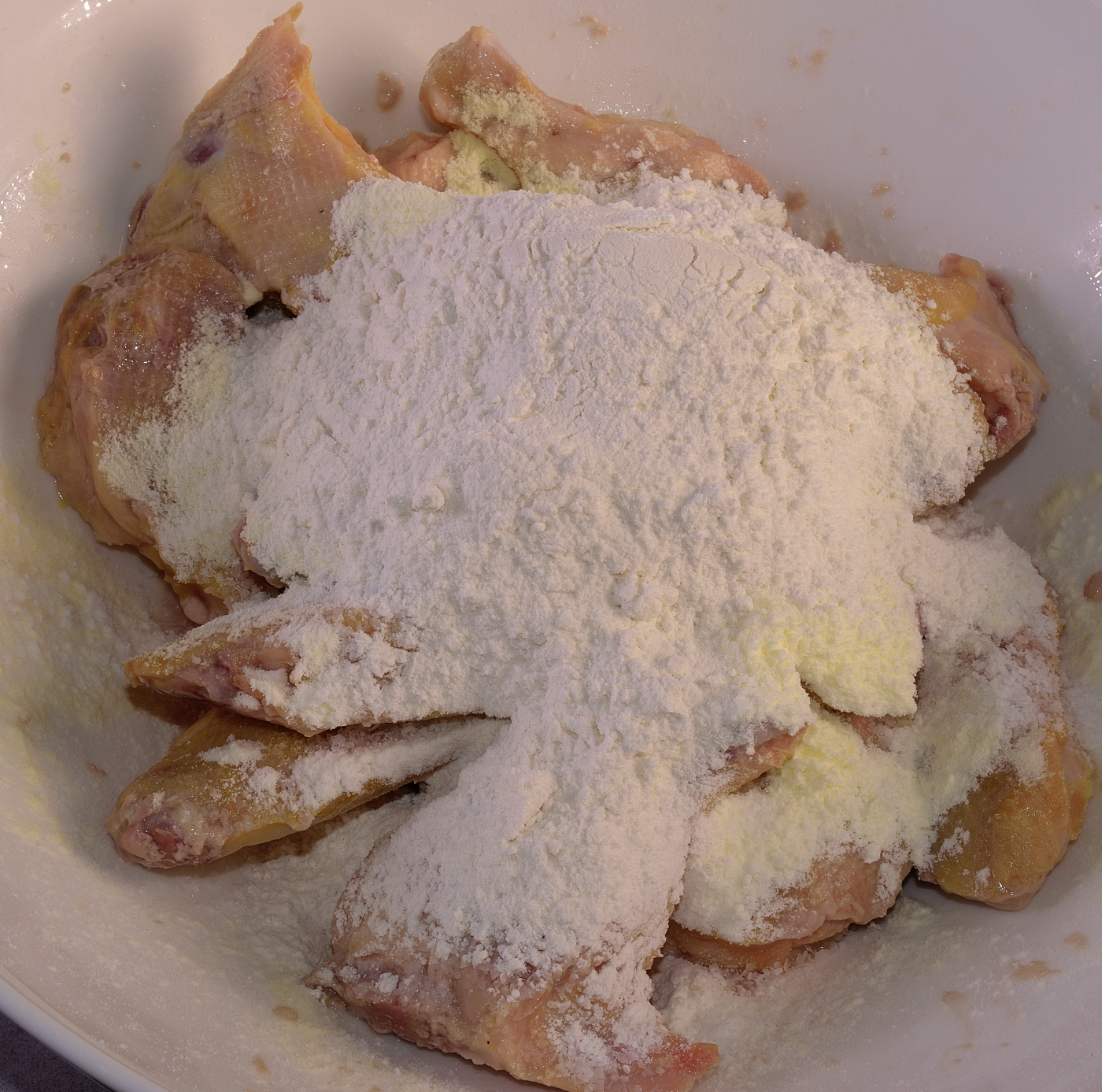 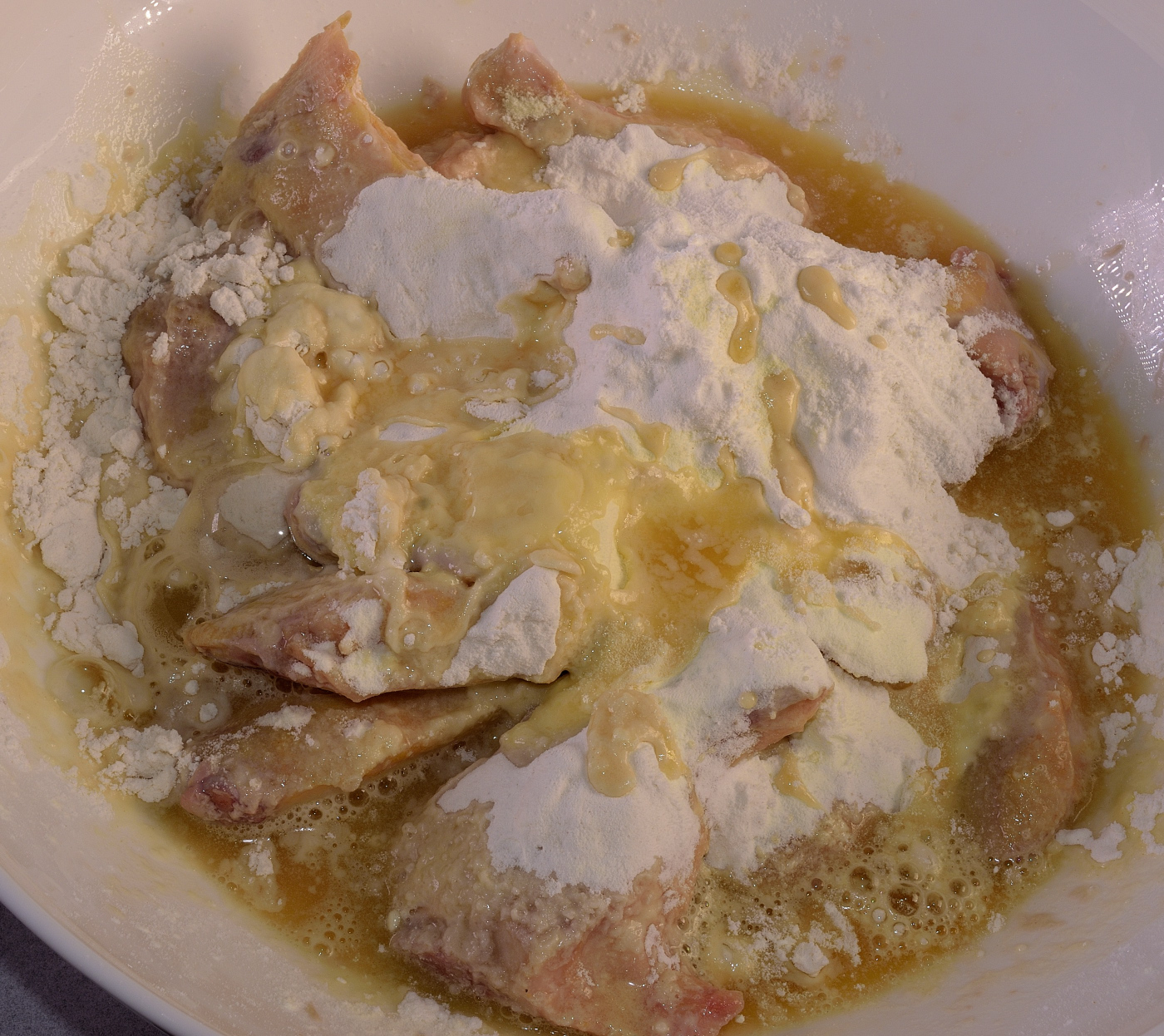 Add the water and the liquid smoke. 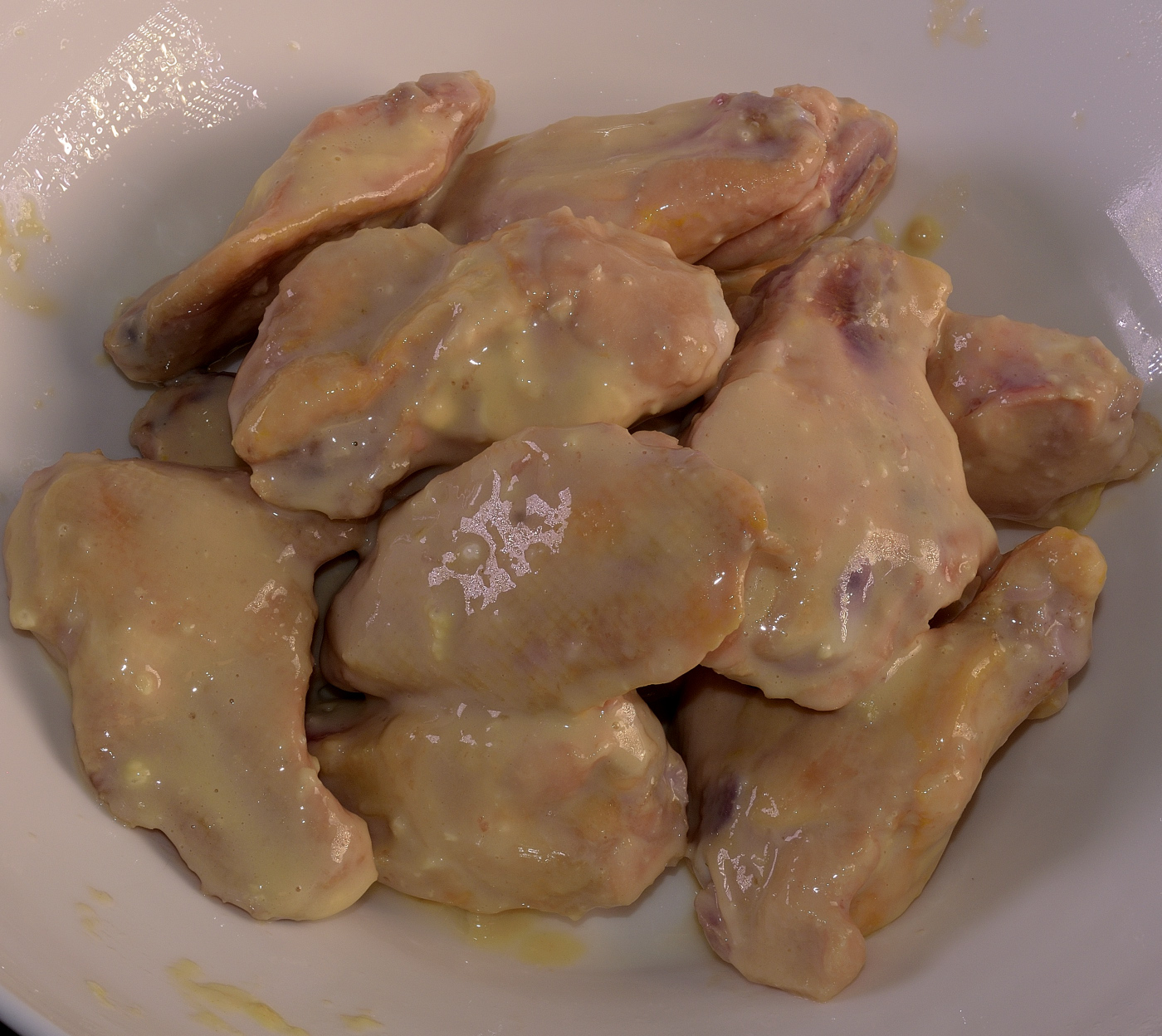 Mix well to coat and drain off the excess batter. 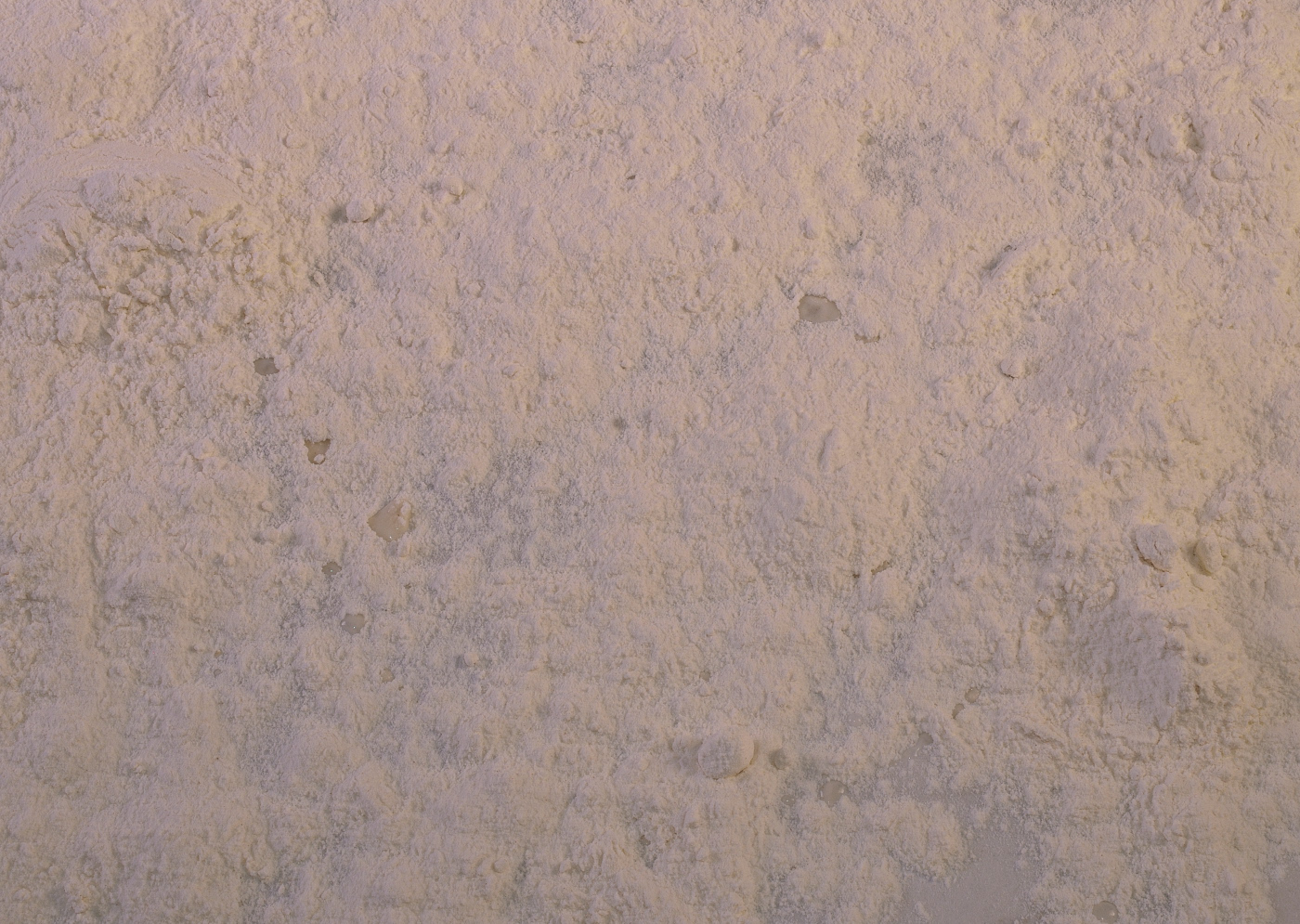 Line a sheet pan with parchment and dust well with flour. 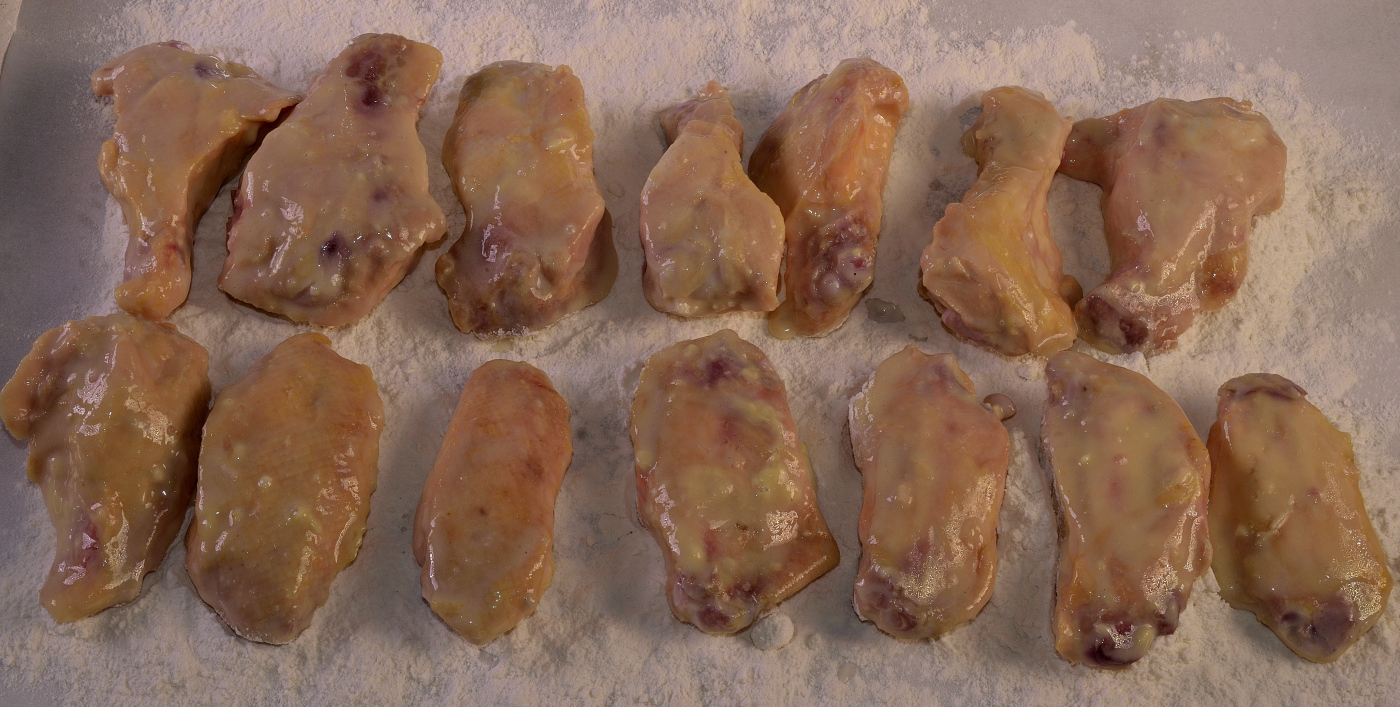 Arrange the wings on the flour–do not allow them to touch each other.

Sprinkle the remaining flour over the wings.

Turn the wings over and make sure the surface of the wings is dry. Allow to rest in the refrigerator at 40 F/4 C for one hour–this is important to allow the crust to cling to the wings!

Shake the excess flour off of the wings and arrange them on a rack. Stand by to launch.

I would love to tell you that the wings can be lightly sprayed with oil and then air fried (in an air fryer) or a convection oven set on high heat. But I would be lying. The fact is, in order to get that color, and that super crispy surface, these wings have to be deep fried. That’s why there are fried chicken restaurant chains–because nobody really wants to take the time or the trouble. It is what it is. There is no escape. I could tell you that deep frying is a snap, and that wouldn’t actually be a lie. I would remind you, though, that deep frying requires a little more effort and cleanup than most other forms of cooking. The trick is to stay organized. Wear shoes, not sandals in case you spill. Gloves are good, as are deep skillets and clean oil. Beyond that, it is up to the enthusiast to decide just how devoted they are to the results.

Heat shortening/oil in a deep sauce pan to 315 F/158 C. Use a probe thermometer to watch the temperature rise. There should be enough oil to fully submerge the wings, but the oil should be no deeper than half the height of the pan. Do not crowd the pan. Carefully lower each wing into the oil until you have five or six in there. They don’t have to all go in at the same time, because they don’t all come out at the same time. Yes. You have to stand there and watch. Fry until they achieve the desired color.

Remove the wings with tongs and lay on a rack. Keep warm in the oven while you make the onion rings, if that is your plan. Otherwise, it is time to eat. Note: When there is chopped parsley in the kitchen, it tends to show up here and there. 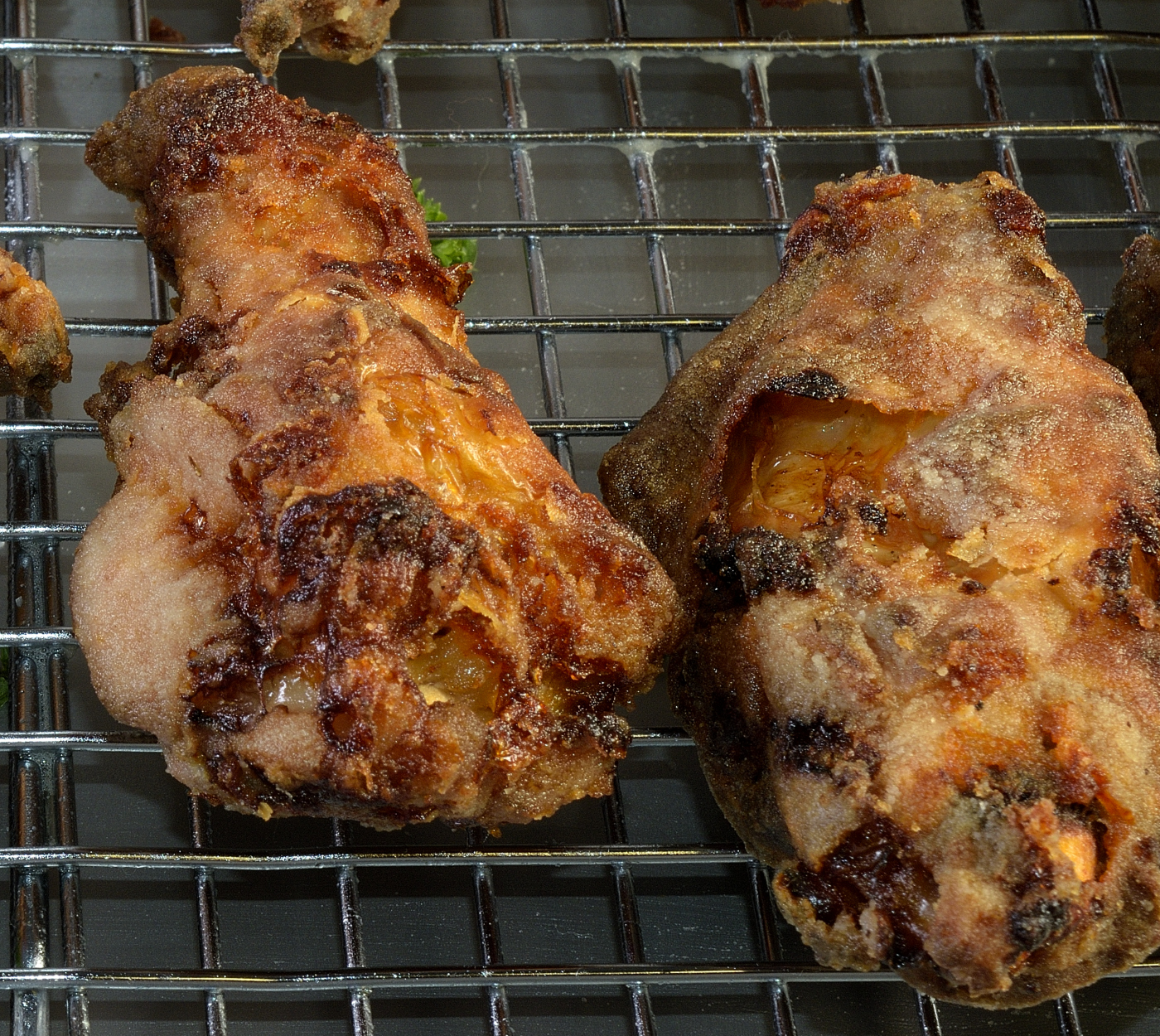 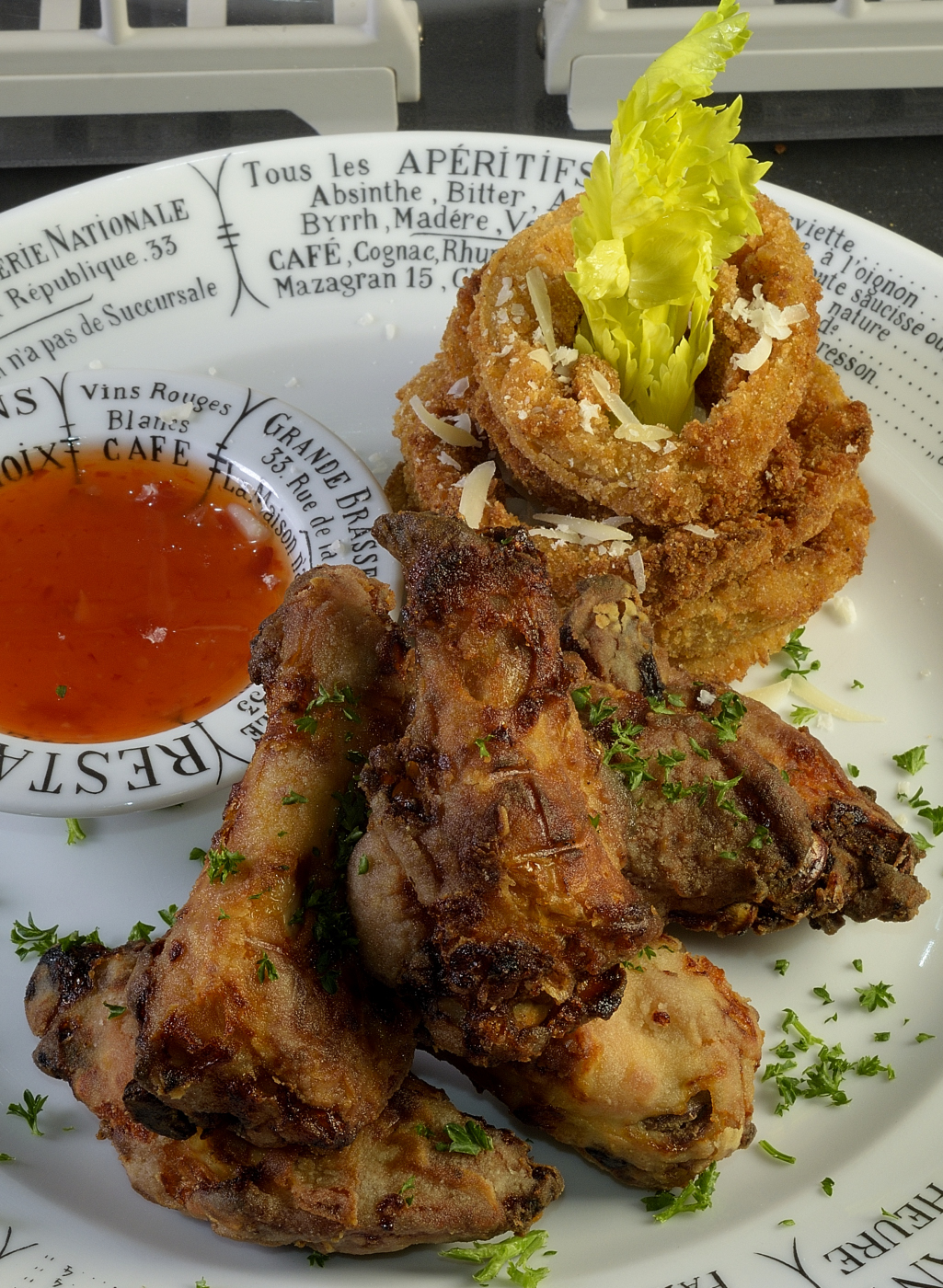 Chopped parsley and a little Parmesan on the rings. That sweet chilli sauce is almost as addicting as Frank’s or Heinz. 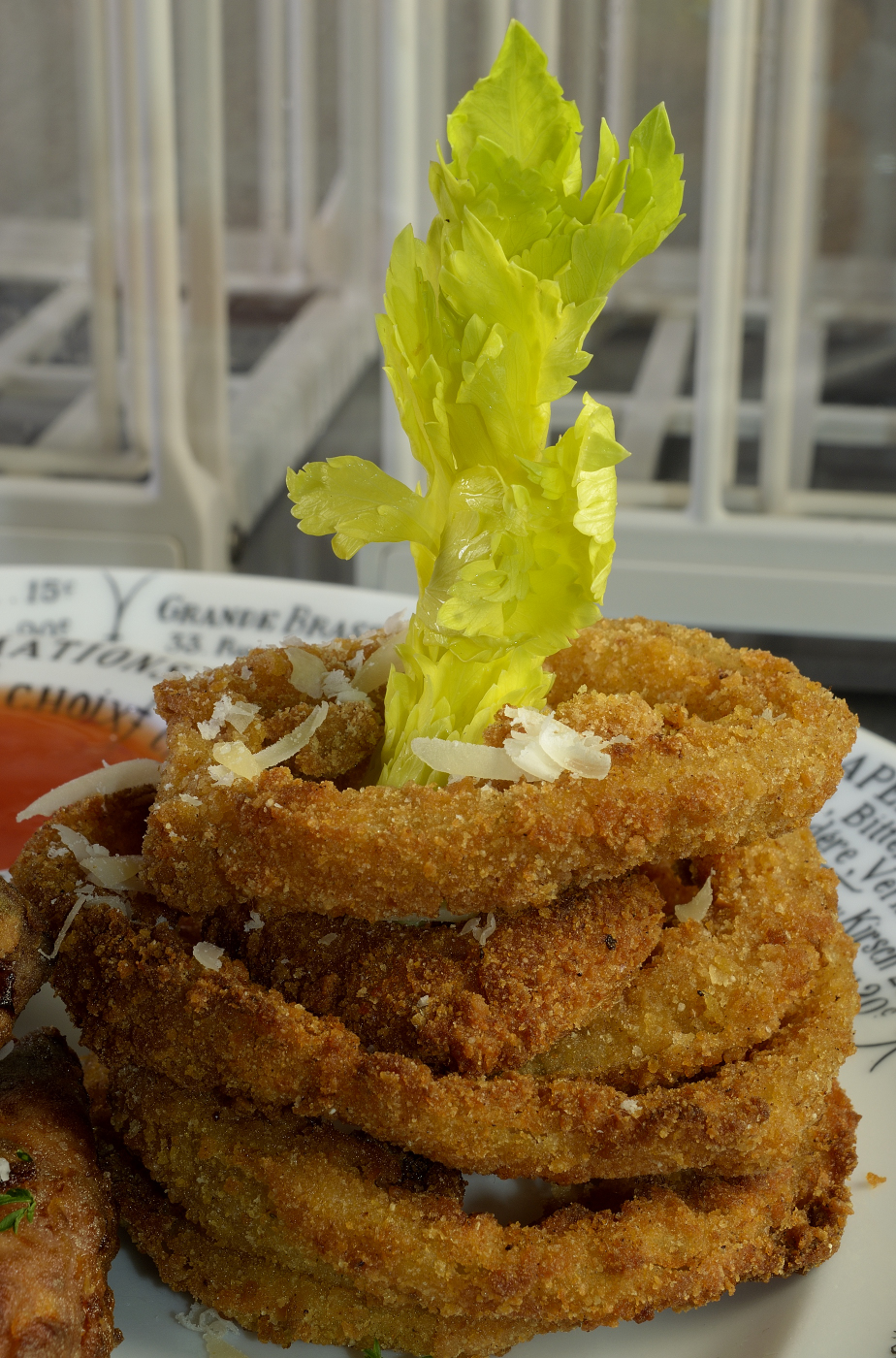 Rings Jenga style with the leafy stalk of the celery. Too much? 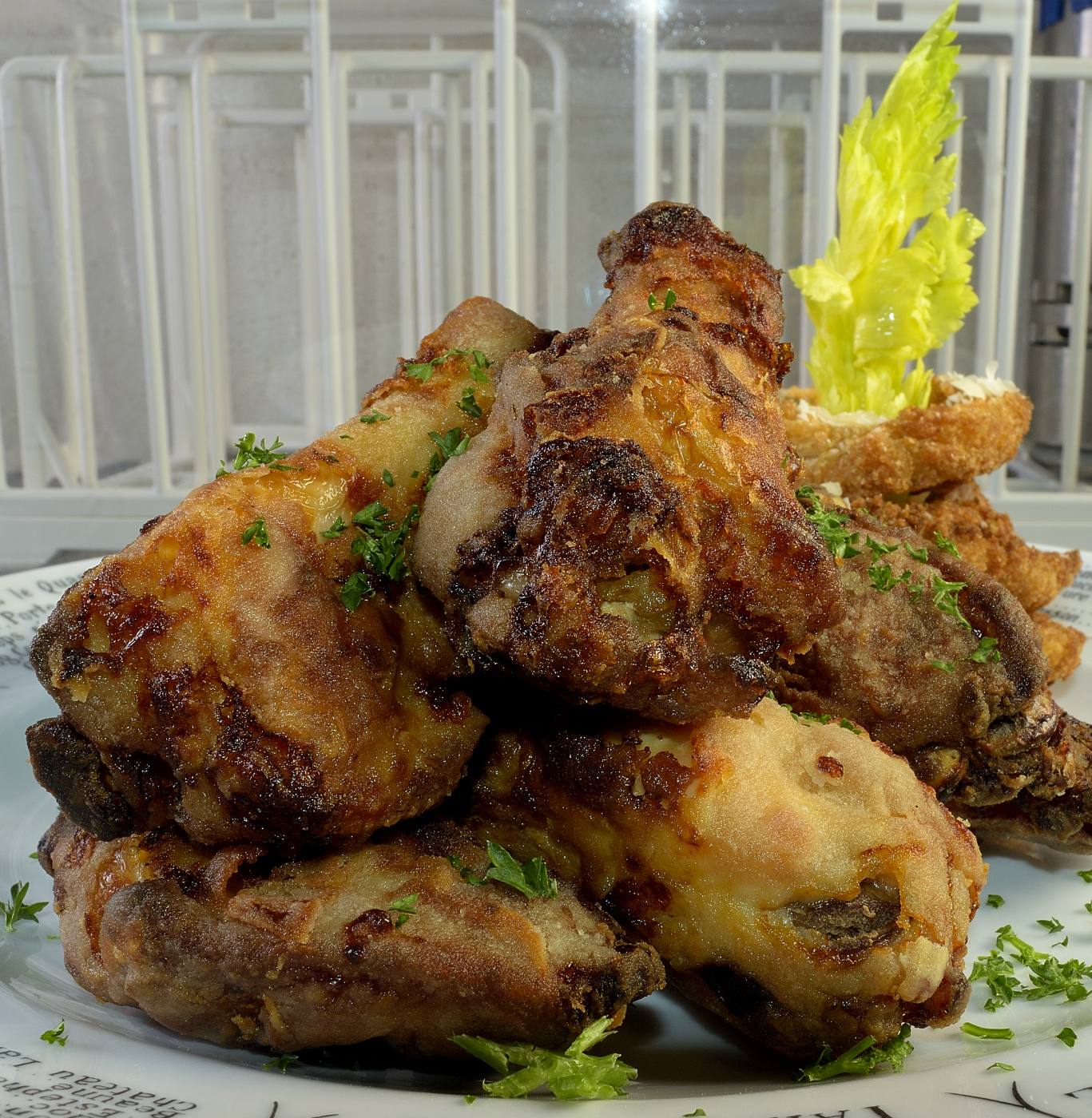 The closer you get, the better it looks. 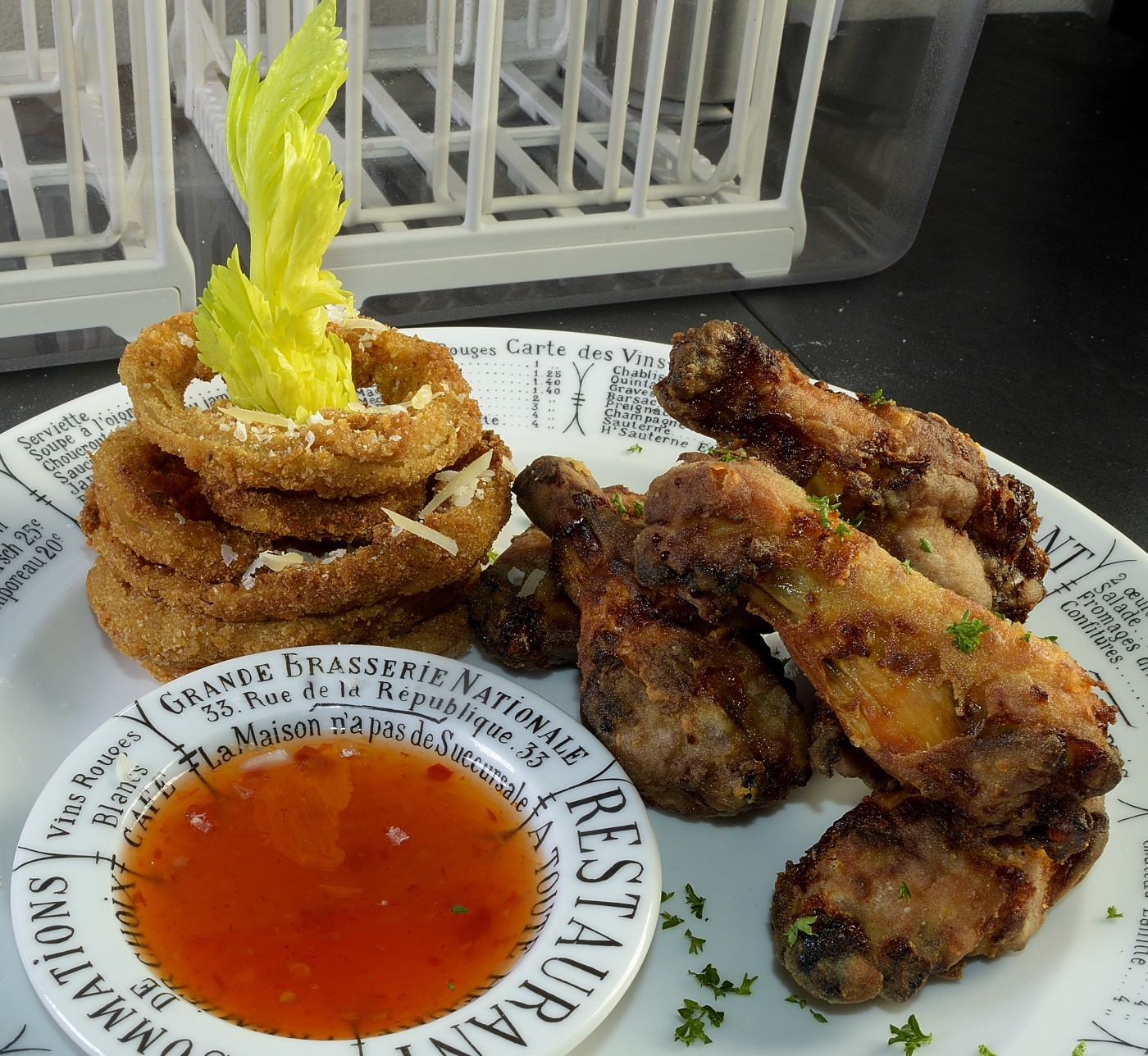 Chicken wings, the tang of buttermilk, a sinfully crisp crust and a hint of smoke. What's could possibly be missing? ONION RINGS.