Brown gravy/demi-glace/espagnole, Knorr/Maggi make an acceptable product, unless you want to make your own–instructions HERE

Corn, fresh, 1 ear (or more if want to save some for another meal!). I always do at least four.

How flat is a flatiron?
It wasn’t until the late 20th century that the flatiron/infraspinatus muscle became widely acknowledged as a cut that was tender in and of itself. The flatiron is located in the chuck/shoulder area of the animal and is surrounded by a lot of hard working muscles.

The flat iron is the least exercised of four muscles in the animal’s rotator cuff. It would be different if cattle threw fast balls and curves.

There is an extremely tough sheet of gristle that runs horizontally through the entire cut, which is usually removed before packaging. The top piece and the bottom piece look more or less the same.

This sample weighed approximately 24 oz/700 g, so I cut it in half and sous vide processed them separately. The processing serves to pasteurize the steak. If the seal on the second packages is not broken, it can be safely refrigerated at least as long as it will take everybody to forget the last time they had it–much like a sealed carton of pasteurized milk.

You can start it early in the morning or even the night before. This temperature converts collagen to gelatin, but very very slowly, and the difference between 6-12 hours for this sturdy cut is mostly a matter of slight preference–almost undetectable.

Shock the steaks in the bags in tap water with ice until they achieve 70 F/21 C. This prevents the heat of the package from affecting the ambient temperature of the refrigerator. Refrigerate at 40 F/4 C until service. Remove the steak(s) from the packaging, harvest the juices for later applications, and pat the steaks dry with a clean towel.

Sprinkle with the kosher salt, paprika and ground black pepper. Push the seasoning in with the palm of your hand, but expect some to fall off. This is unavoidable. Set aside and/or refrigerate at 40 F/4 C.

Seasonal vegetables like corn should not be underestimated in their contribution to the overall experience of any dish. The crispness of the potatoes adds variety to the otherwise unctuous ingredients in accompaniment.

Seal the corn in an appropriate pouch and sous vide process at
183 F/84 C X 4 hours.

When the time has elapsed, shock the corn (in the bag) in ice water until it achieves 70 F/21 C.
This should take approximately fifteen minutes. Refrigerate the corn at 40 F/4 C for at least two hours, or even overnight. If refrigerated in this state, the corn will keep for at least a week. Cut the corn off of the cob.  Set aside. 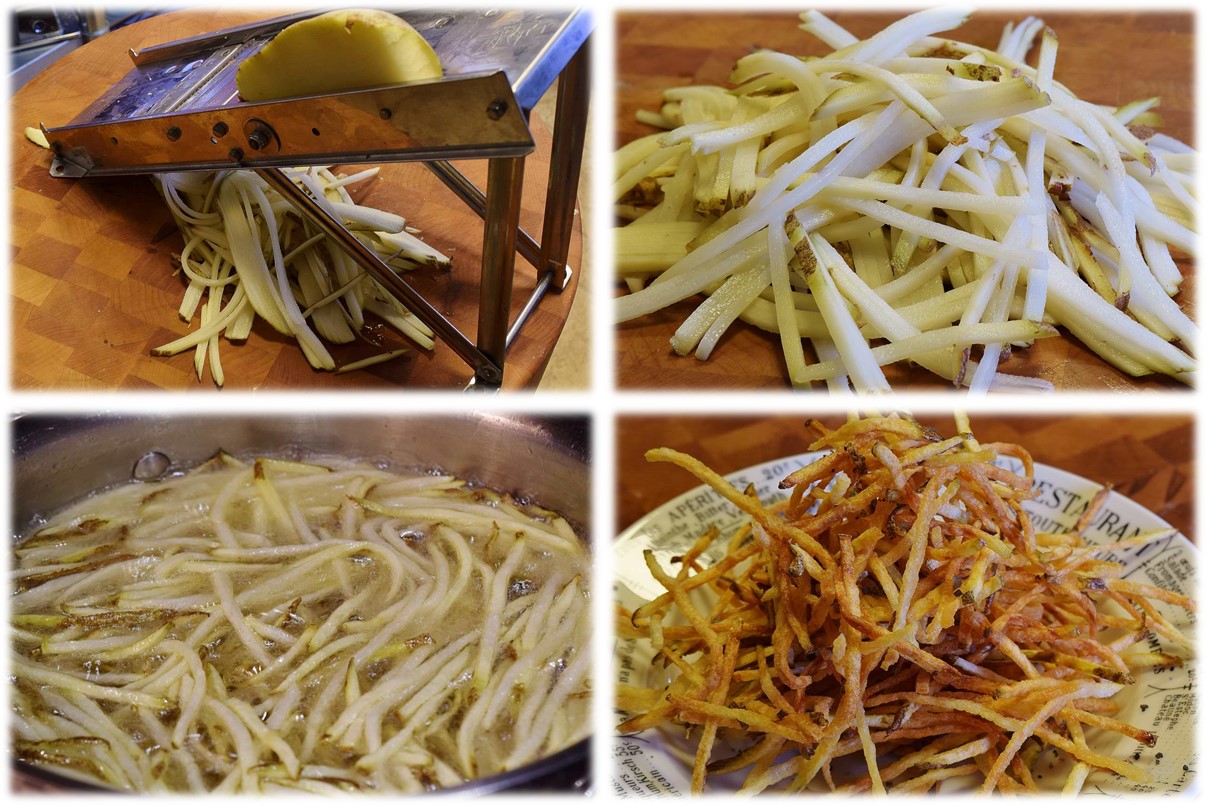 Peel the potato and cut into very thin strips/shoestrings. Pictured is a mandolin, but some food processors have a setting that will achieve it. There are also inexpensive devices that cut spirals. After cutting, spread the potatoes out on a paper towel to absorb excess moisture–this prevents splattering when you add them to the oil. Heat the oil in a deep pan until it achieves
350 F/176 C

Carefully add the potatoes to the hot oil. Turn off the heat after fifteen seconds and let the potatoes fry until they are brown and crisp–usually about one minute. There will be enough heat in the oil to complete the process, even with the burner turned off. This is not necessary, but it saves energy. Remove to a dry paper towel and set aside.

Combine the corn, the garlic powder, S+P, the stock/water, the cream, S+P and butter in a sauce pan; bring to boil. Remove from heat, put in a generic blender and pulse for a few seconds to break apart some of the corn. Return to the pan, reduce heat, and simmer until slightly thickened. Keep warm. I put it in a Ziploc Freezer bag and submerge it in the sous vide bath–drape the unsealed bag over the edge of the container and let the lid hold it secure.

Saute the mushrooms in a few drops of oil until they wilt–no more than a minute. Add the brown sauce and return to simmer, but do not boil again. Set aside.

Drizzle the steaks with a few drops of oil–do not oil the actual cooking surface. If both of the steaks will not fit without touching each other or the sides of the pan, sear one at a time. This is very important to prevent overcooking.

Add the steak(s) and sear on high until brown on one side–approximately sixty seconds. Do not cover. You should hear sizzling and even popping. If you hear hissing, the pan is too cold. Turn the steak(s), but only cook them on the second side for approximately thirty seconds–one half the amount of time that you seared the first side. Why? Because the steak is a lot hotter when you flip it than it was when you put it in the pan.

Remove the steaks from the pan. Divide the creamed corn between the two plates–put it just slightly off center. Put the mushroom sauce right next to it. Keep everything in the center of the plate, there should be an empty space around the rim as shown.

Slice the steak thinly on the bias, usually about twelve slices. Shingle them on top of the mushroom sauce. Lightly lift the potatoes so they do not break, and pile them on top of the whole affair. I garnished this one with a deep fried fennel frond, but a sprig of parsley works too!

I hope you find this recipe useful. Stay tuned for more recipes!

Collagen content determines whether meat will be tough or tender--even more so than marbling. There is rarely more than 6% collagen by weight in any cut, but it must be converted to gelatin in order to achieve the desired consistency.

Scientifically referred to as the "infraspinatus," the flat iron steak occurs in the chuck (shoulder) of a steer/heifer, where most of the muscles are extremely hard working and high in collagen.